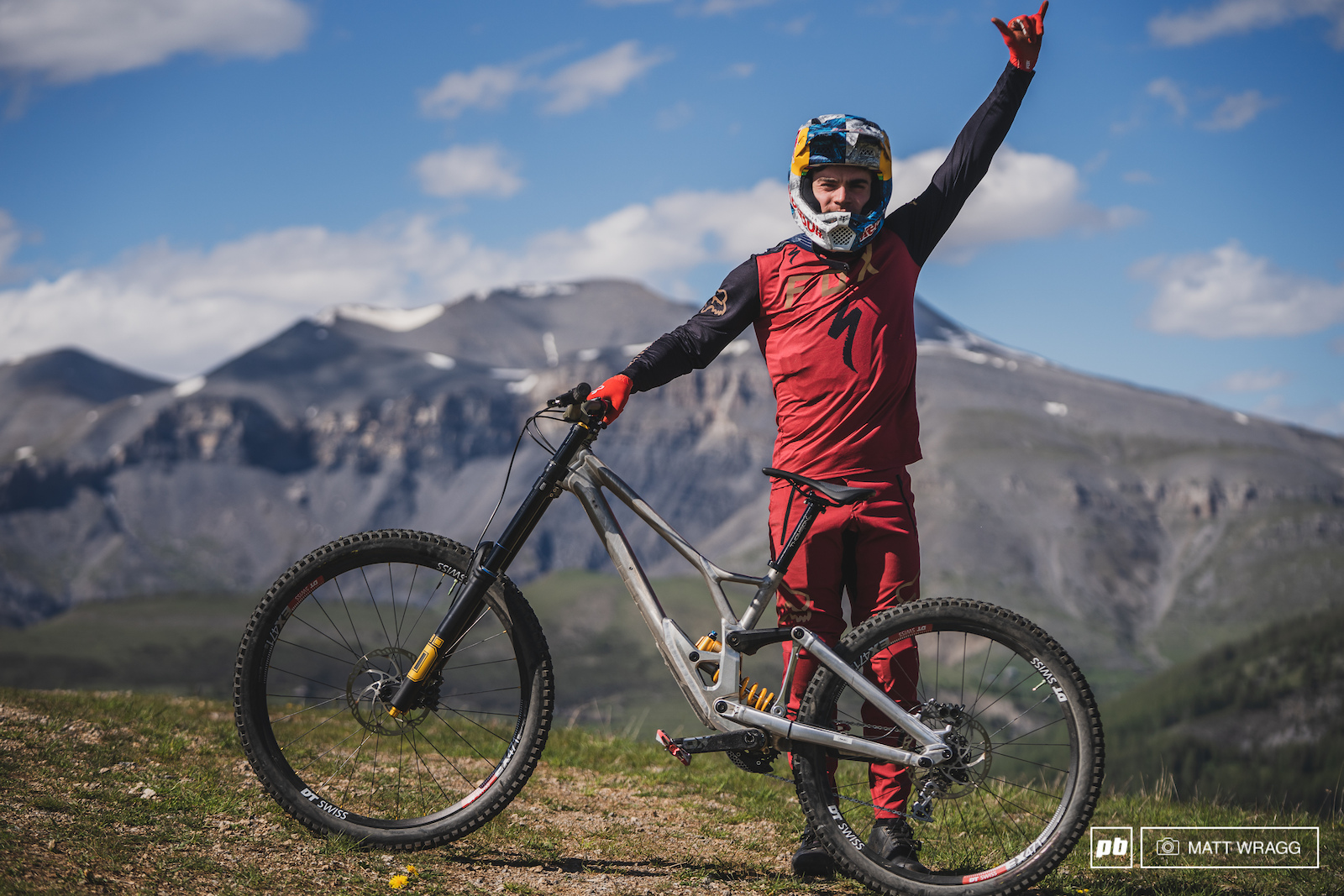 Loic Bruni's
Specialized Demo
Bike Check
If there is one race bike every other racer would like to throw a leg over, it is likely Loic Bruni's Specialized Demo. Not because the Demo is clearly a superior bike, a debate that could rage on and on, but because of the level of precision it is refined to. You just have to stand beside a race track to appreciate that it's different, you can hear how much quieter it is when he comes by, even the freehub sounds like it has been stripped down and reassembled to go faster. To put the attention to detail into context, a friend at DT Swiss once explained to me that Jack, Loic's career-long mechanic, had data on the differences between straight-pull and J-bend spokes, two- and three-cross lacing, spoke counts and they will change the wheels using that data to suit each course. There are very few other programs out there that put this much time and effort into creating the ultimate race bike. 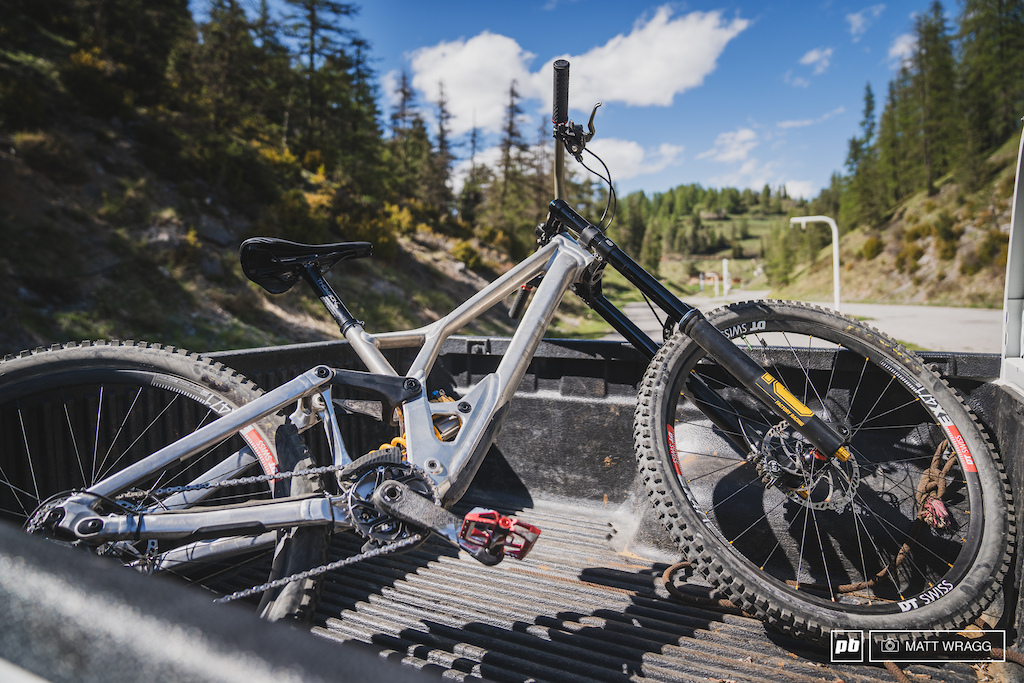 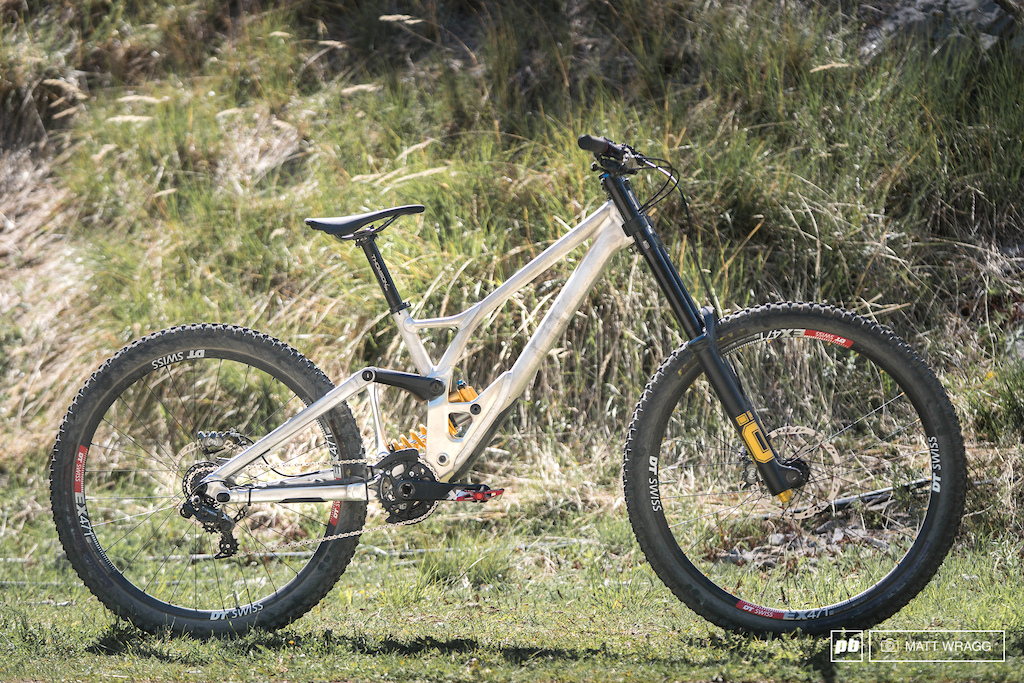 For this year Loic has gone up a frame size slightly. For a while, he felt the bike was a bit small, and looking at photos and videos it looked small under him which confirmed his suspicion. He felt he could go a little longer in terms of reach and he says as soon as he did it felt good, he feels more natural and can move more on the bike. Although the sizing is not standard, he says it is pretty close to the S4 sizing with a 465mm reach. The raw (unlacquered) finish is a pre-season thing - expect this steed to get some fancy new paint during the season, although in the flesh the completely raw metal has a very industrial sex appeal to it. 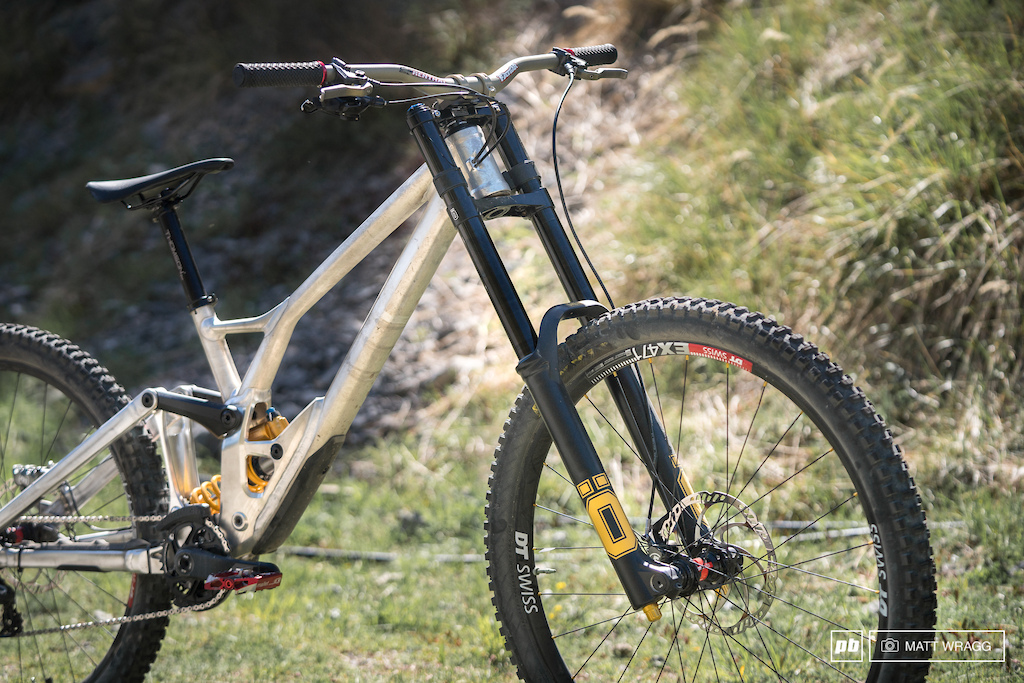 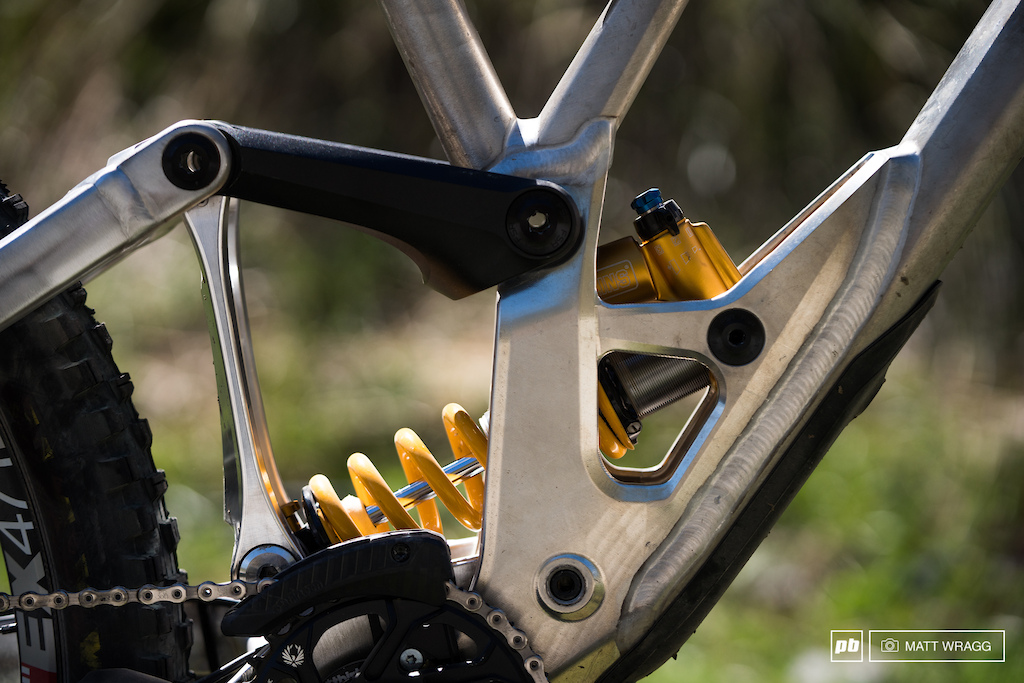 Talking suspension setup with Loic, he is not about to give away much of what is going on inside his fork and shock, and he agreed there is not much point talking about clicks as they run their own special cartridge. What he would share was that he runs his sag at the back between 20-23%, adjusting it to suit the track. He then sets the fork to balance with the shock - he admits that he rides off the back of the bike a bit, but doesn't go for the full South of France setup where you run the fork stiff and ride behind it, as he says it puts you in the wrong range for the shock and creates a harsh feeling, especially on this bike. He is very sensitive to the overall balance of the bike says that if he begins to get a weird feeling in his feet he stiffens the rear to balance the bike. 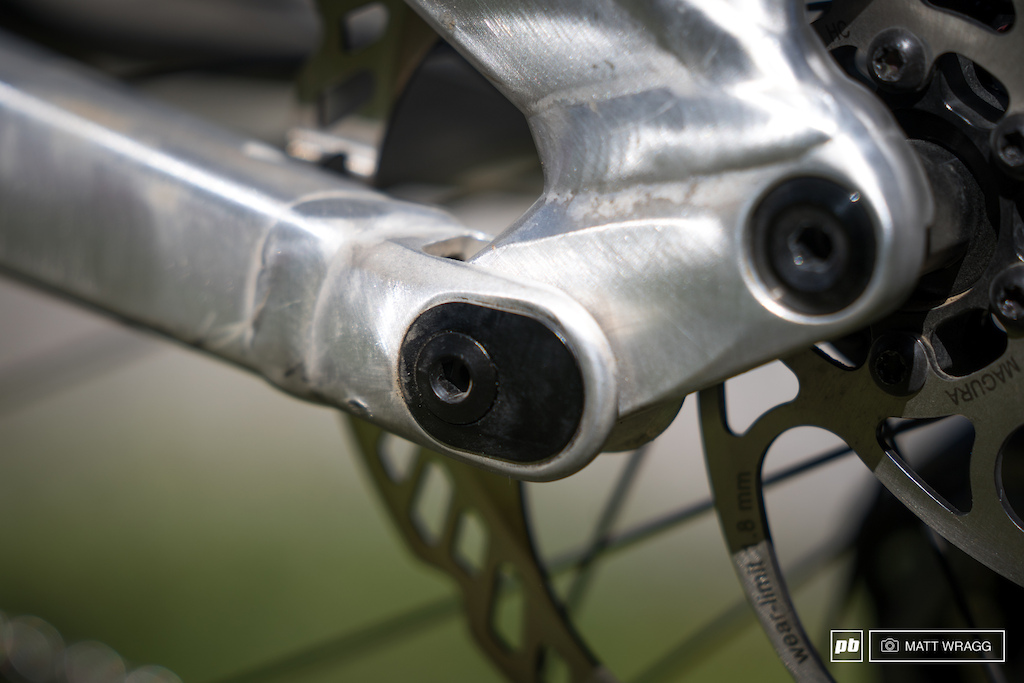 The geometry chip on the chainstays is set to the shorter position, but you should not read too much into that as the chainstays are made to measure. 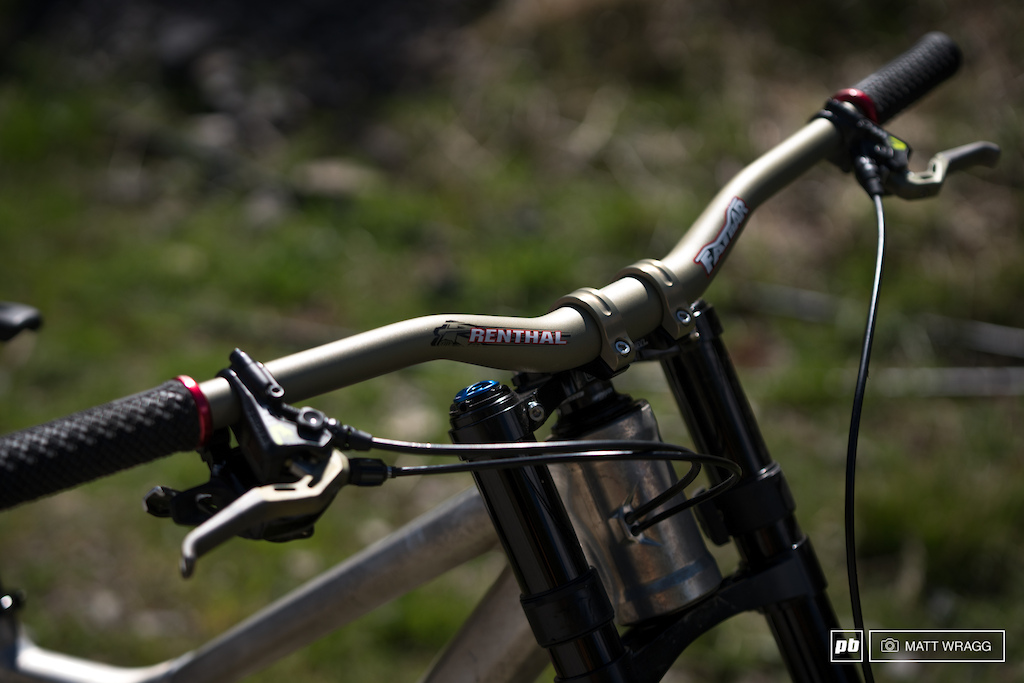 Renthal will supply Loic's cockpit this year - he is running an aluminum Fatbar at 780mm with a 30mm rise. 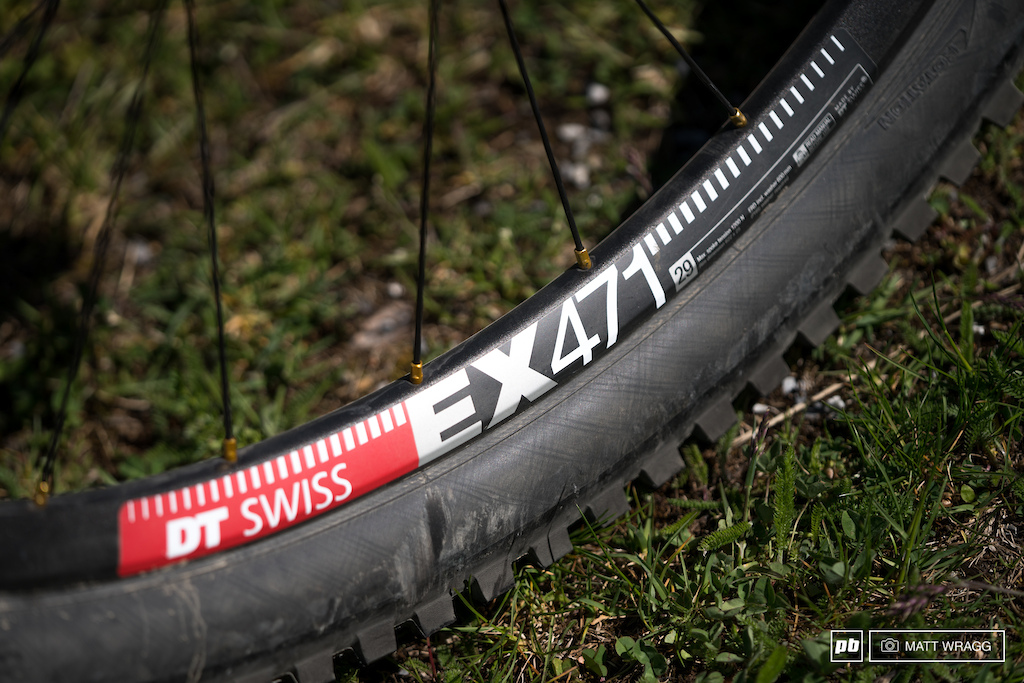 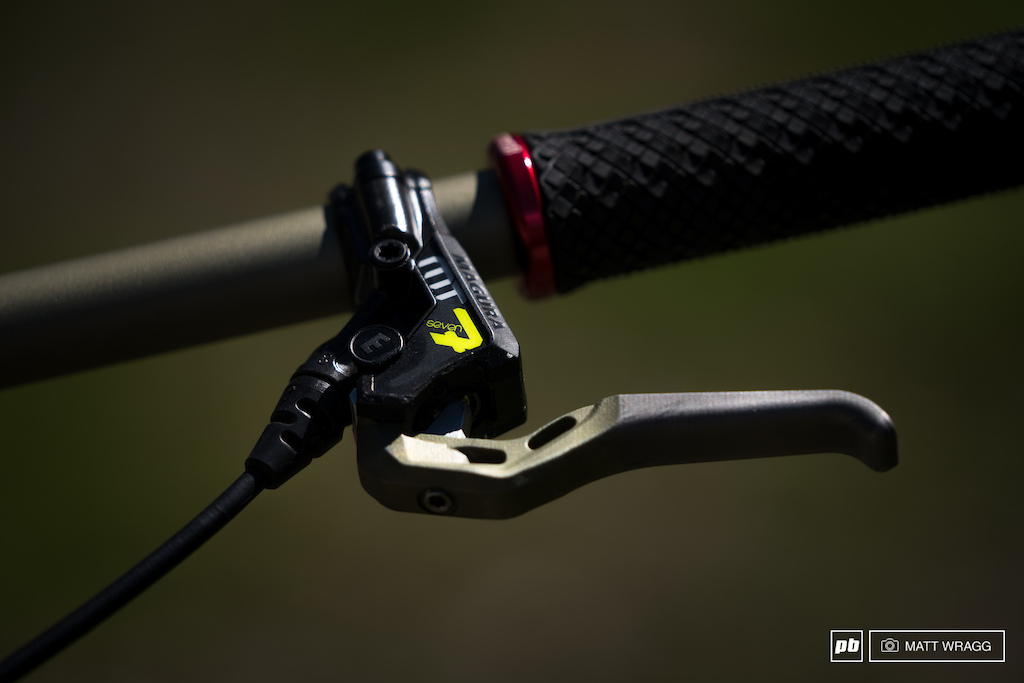 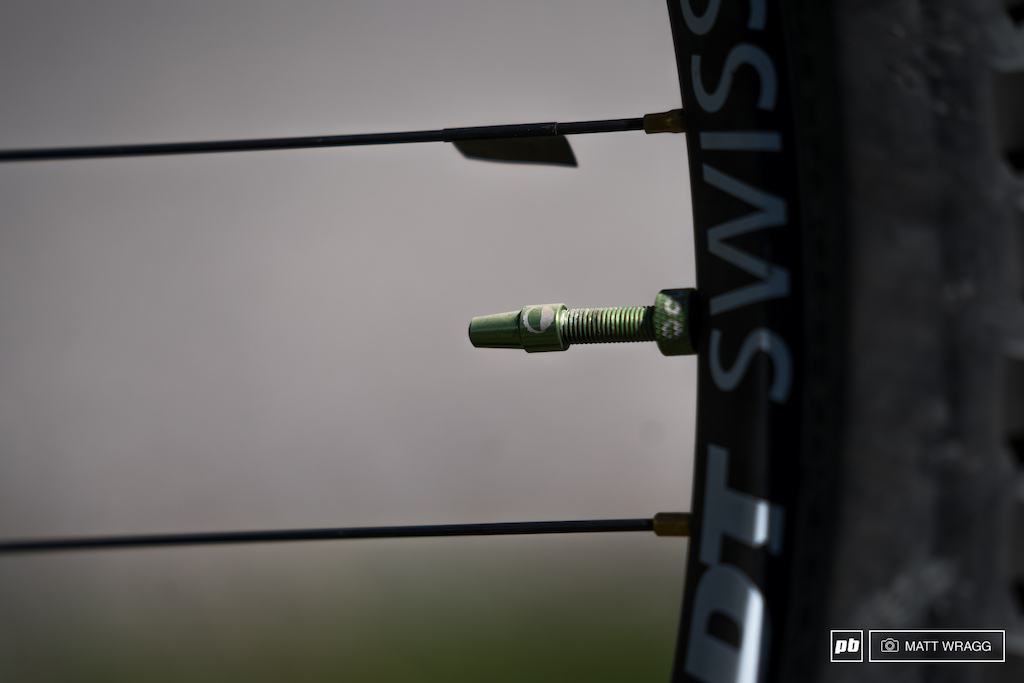 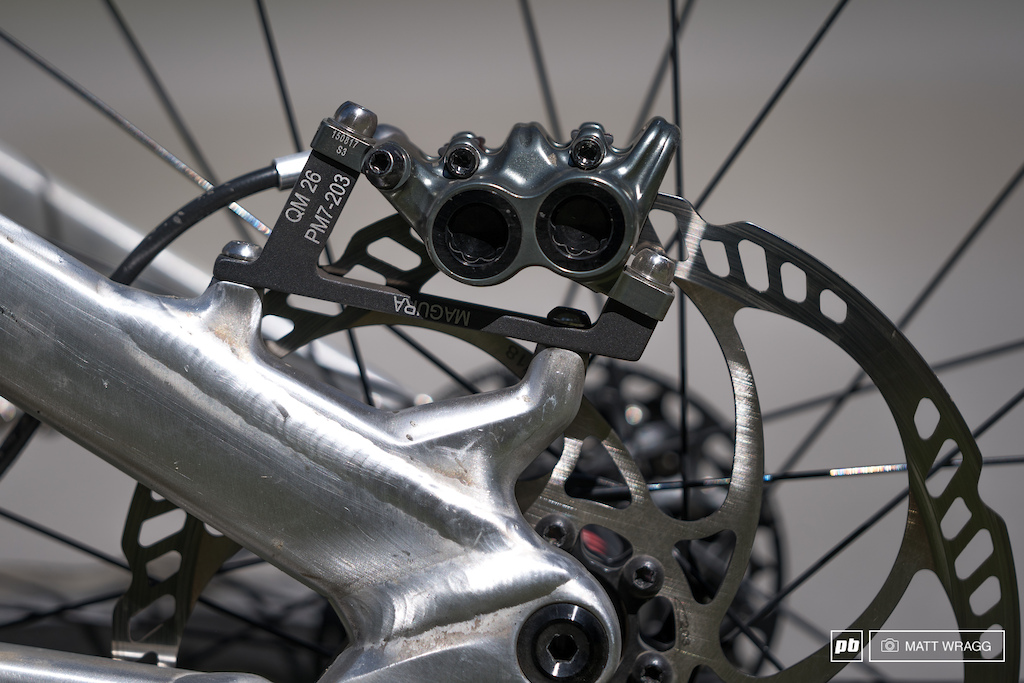 For his wheels, DT Swiss EX471s remain his rim of choice, laced onto 240 hubs with gold nipples for a touch of flair. CushCore inserts are installed front and rear. A set of Magura MT7's with 203mm rotors and 3D printed levers handle stopping duties - Loic hasn't felt the need to join the 223mm rotor party just yet. 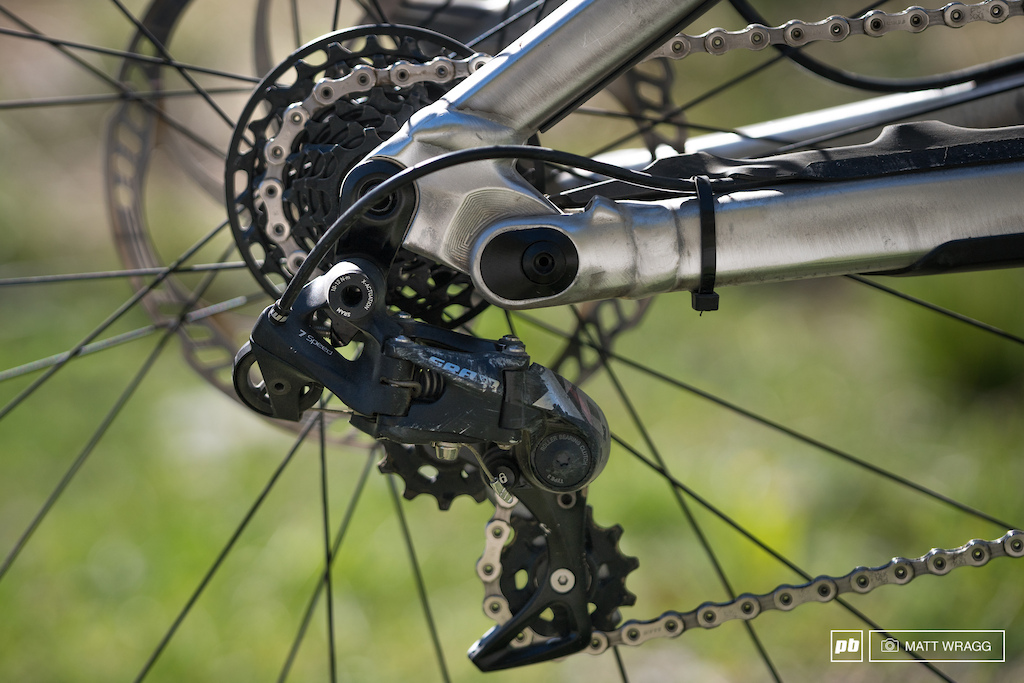 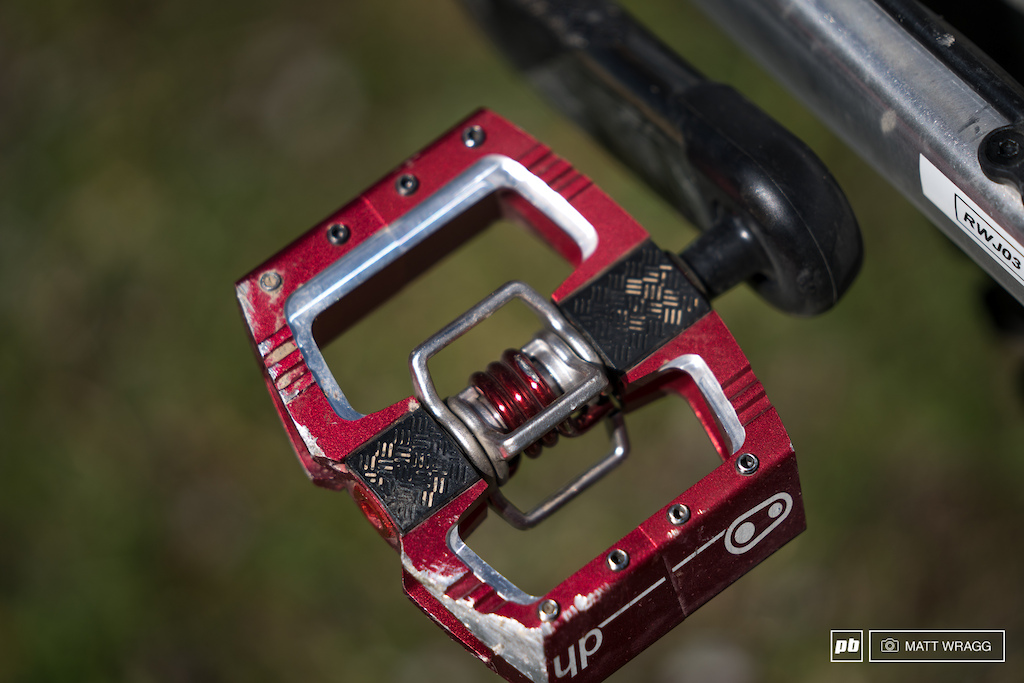 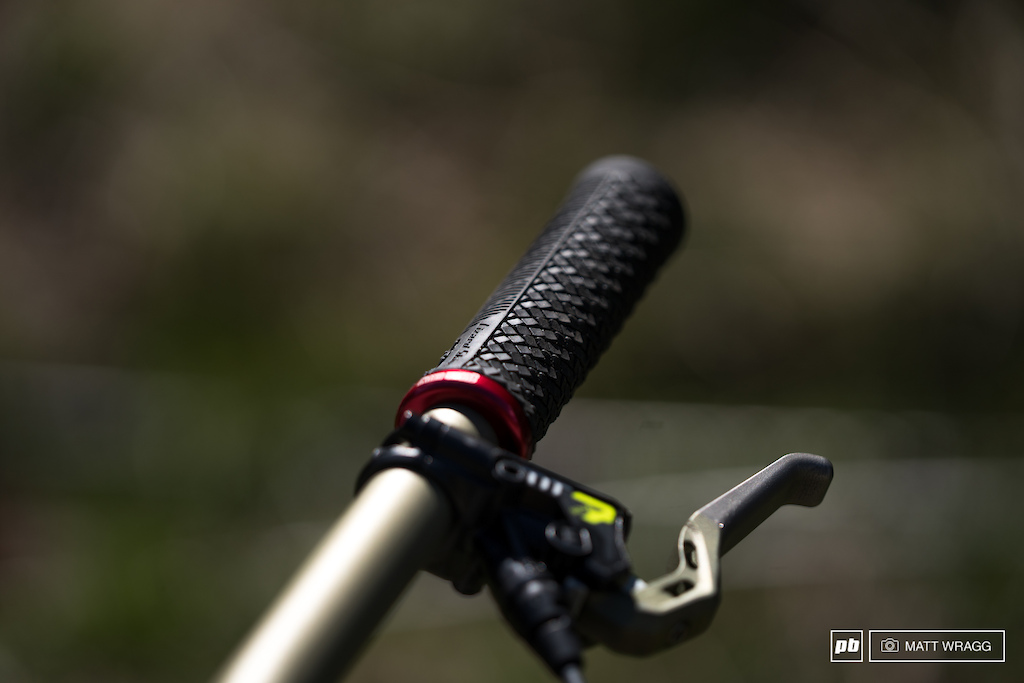 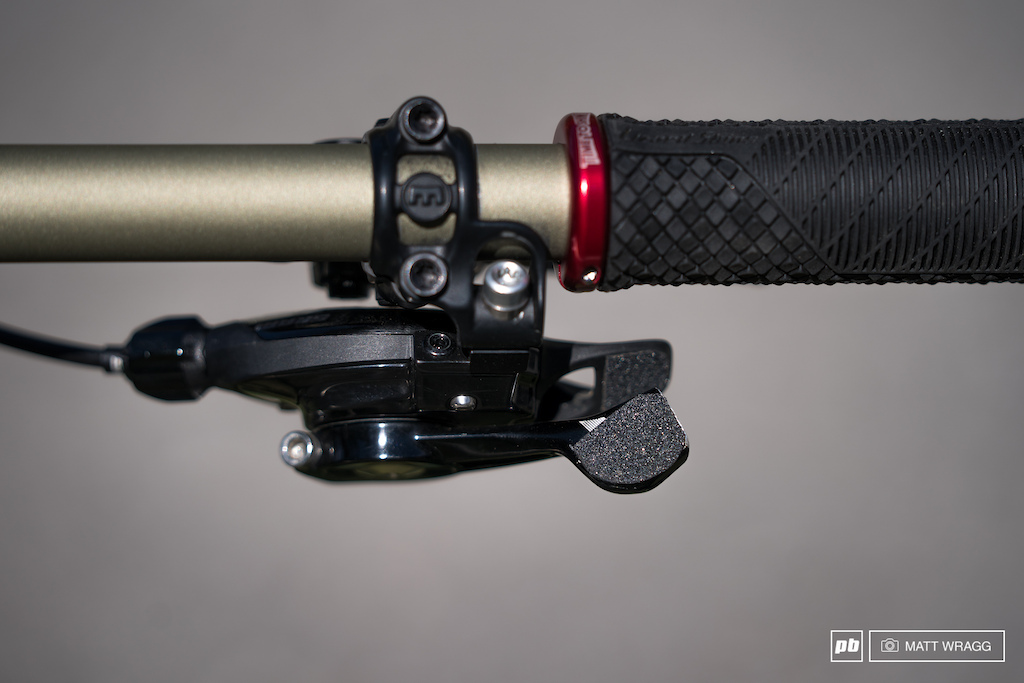 A SRAM X01 DH drivetrain provides his running gear - it is going to be interesting to see how his relationship with SRAM evolves in the coming years as Specialized have moved their XC and Enduro factory teams to RockShox suspension, but you would have to imagine that Loic and Jack would be hesitant to lose Ohlins. While he may have switched the cockpit to Renthal, he has stuck with Lizard Skin Charger Evo grips. Crankbrothers Mallets are his pedal choice. His contact points are finished off with the obligatory grip tape on the shifter paddles.

CascadeComponents (Jun 2, 2021 at 12:07)
Wait, what's that? Custom linkages? Who would ever do such a thing? Probably should have just got the right bike to begin with.

z-man (Jun 2, 2021 at 13:35) (Below Threshold)
They're a development team. These linkages could also be considered prototype iterations. Not to mention they're developed hand in hand with the best engineers and suspension brand on the planet. Not exactly comparable (nor should they be) to what can be bought of the shelf. Custom links are great for the small percentage of riders that do have a level of knowledge that allows them to fully understand what they're doing and why. They certainly have a market as MTBers are super tech-savvy individuals.

usedbikestuff (Jun 2, 2021 at 20:38)
I’m sorry, what I read was “for a few hundred bucks you too can pretend to be a factory sponsored World Cup racer working on company development programs”

chakaping (Jun 3, 2021 at 1:26)
Yeah, it's really shocking that the fastest man in DH might need a different linkage to the average Joe or Josephine.

dolores (Jun 2, 2021 at 12:48)
The reason is that darker colors absorb more of the different wavelengths of light energy, while white (OEM Maxxis logos) or light-colored (yellow Maxxis logos) reflect the light of most wavelengths #sciencing

I wish they had bikes like this when I was a kid. It's amazing how far they've come.

jomacba (Jun 2, 2021 at 12:50)
"He chose the Apex stem over the Duo and had taken the time to measure the stack heights of the stems, noting that the Apex sits a little higher than the Duo."
Well neither would ring true as he's clearly running an Integra stem. Nor would it make any sense to run anything other than an integrated stem. Stack can easily be adjusted with stem spacers. I'm curious... Did Loic screw that info up? Or are you making this up as you go?

Jordmackay (Jun 3, 2021 at 1:16) (Below Threshold)
@thenotoriousmic: Frame is a horrible shape. Please retract this statement.

prevail (Jun 2, 2021 at 14:51)
Why should it have an effect on the DH team if the XC/Enduro FACTORY teams are using SRAM? As far as I remember Specialized is „only“ the frame sponsor isn’t it? They are not a factory team.

Bob-Agg (Jun 2, 2021 at 15:08)
Totally anecdotal but I was having trouble destroying rims every other month while running inserts and heavy casings. I read about DH riders using narrower wheels to help minimize damage, swapped to a 27 ID model and only had a few minor dings and a small flat spot in a year and a half since.

jlf1200 (Jun 2, 2021 at 17:32)
@Bob-Agg: It's likely less about protection and more about tire profiles. Especially with a Minion style tread pattern, where there's a pretty big benefit to getting the shoulder lugs "opened up."

The entire super-wide rim fad was basically driven by mediocre riders who were experiencing straight-line speed improvements due to shock absorption from higher tire volume, and who never slam turns or need to control drift so they didn't notice their tire profiles were squared off.

Bob-Agg (Jun 2, 2021 at 18:10)
@jlf1200: I can't find it but now one world cup mechanic interviewed 100% said they tried 30mm rims and found the failure rate increased dramatically. Now my experience is also likely due to a buying different brand of rim but me and my wallet are certainly glad I swapped.

Dustfarter (Jun 2, 2021 at 14:09)
Pretty much an all aluminum bike without laboring the point about being "non-carbon"

Goes to show that you don't necessarily need the fantastic plastic to go fast....downhill anyway.

gabriel-mission9 (Jun 2, 2021 at 12:54)
People generally run less reach on a DH bike than on bikes with less travel and steeper angles. If you ran the same reach on your dh bike as your enduro bike, the long fork/slack head angle would mean the front wheel ended up a very long way in front of you.

Muckal (Jun 2, 2021 at 12:59)
And 35mm internal rims, because the tires don't work on narrower ones. Maybe someone should tell Loic. To be fair, DH Bikes generally have less reach than other bikes.

SintraFreeride (Jun 2, 2021 at 13:33)
He admits he rides a bit off the back which is why he has a shorter reach. If you ride in the middle then you tend to ride bikes with longer reach. Also since when are pro riders frame sizing a reference for the average mtbiker???

jeremy3220 (Jun 3, 2021 at 4:17)
@SintraFreeride: I'm not talking about preference or riding style, I'm talking about what's available in size large and XL in DH bikes.

joaquin21ap (Jun 2, 2021 at 12:24)
I wonder if in the future mtb racing could become more bike less rider due to technology, what do you guys think? I know that if you cant ride crap theres no use in having the best bike, but at a pro level could it be possible?

Bob-Agg (Jun 2, 2021 at 14:11)
I think there's an article in there somewhere: How do you feel about fully automated riderless bikes tomorrow? and how its the same as 29ers ten years ago.

gonecoastal (Jun 2, 2021 at 12:56)
Uh is the team still called Gravity Republic or whatever it was from the Lap days? Also Loic was WC and running full SRAM then.
Integra stem.

collyoh (Jun 2, 2021 at 14:40)
Pretty much looks like any iteration of the Banshee Legend to be fair @Banshee-Team

stormracing (Jun 2, 2021 at 13:31)
He running eccentric bb still?
That’s how he used to adjust the fit better for him to get longer chainstays for more balance

matmattmatthew (Jun 2, 2021 at 13:07)
Tire Spec's? Is he still running narrower tires than most everyone else?

vanillarice19 (Jun 2, 2021 at 22:24)
@Becciu: He is not sponsored by Maxxis. Typically spesh riders run spesh tires but he is running what gives him the best chance to win, sponsor or no sponsor

stubs179 (Jun 3, 2021 at 3:27)
@Becciu: I would image Maxxis would give him blacked out tires because non-sponsored riders on there tires is very good publicity. And people notice.


What?! What is this blasphemy you speak? Ó meu Deus!

madescape (Jun 10, 2021 at 14:21)
@suspended-flesh: They are not consistent feeling tires. If you get lots of different terrains in a day or even in the same trail like we do here they are shit.
Thats why Sam Hill never does well on the Madeira round of EWS

likeittacky (Jun 2, 2021 at 21:39)
More flex and the tires roll slightly when leaned the bike is more compliant less harsh; also why every part is aluminum.

The world of carbon is brutally stiff

hamncheez (Jun 2, 2021 at 12:51)
Par for the course for Specialized. Gwin's first year with them, they sent him out to Fort Bill on a size M, and after the first day he felt too cramped on the bike but they didn't have a L for him anywhere. The factory team had to hit up a local bike shop to find a size L for Gwin to ride.

bikeparkmemes (Jun 2, 2021 at 14:03)
Engineers and pro riders often have different opinions on these things, even as simple as if they are a L or XL. It happens more than you'd think.
Below threshold threads are hidden

ksilvey10 (Jun 2, 2021 at 12:48)
Blacking-out Maxxis logos has to be the single dumbest marketing move in the industry