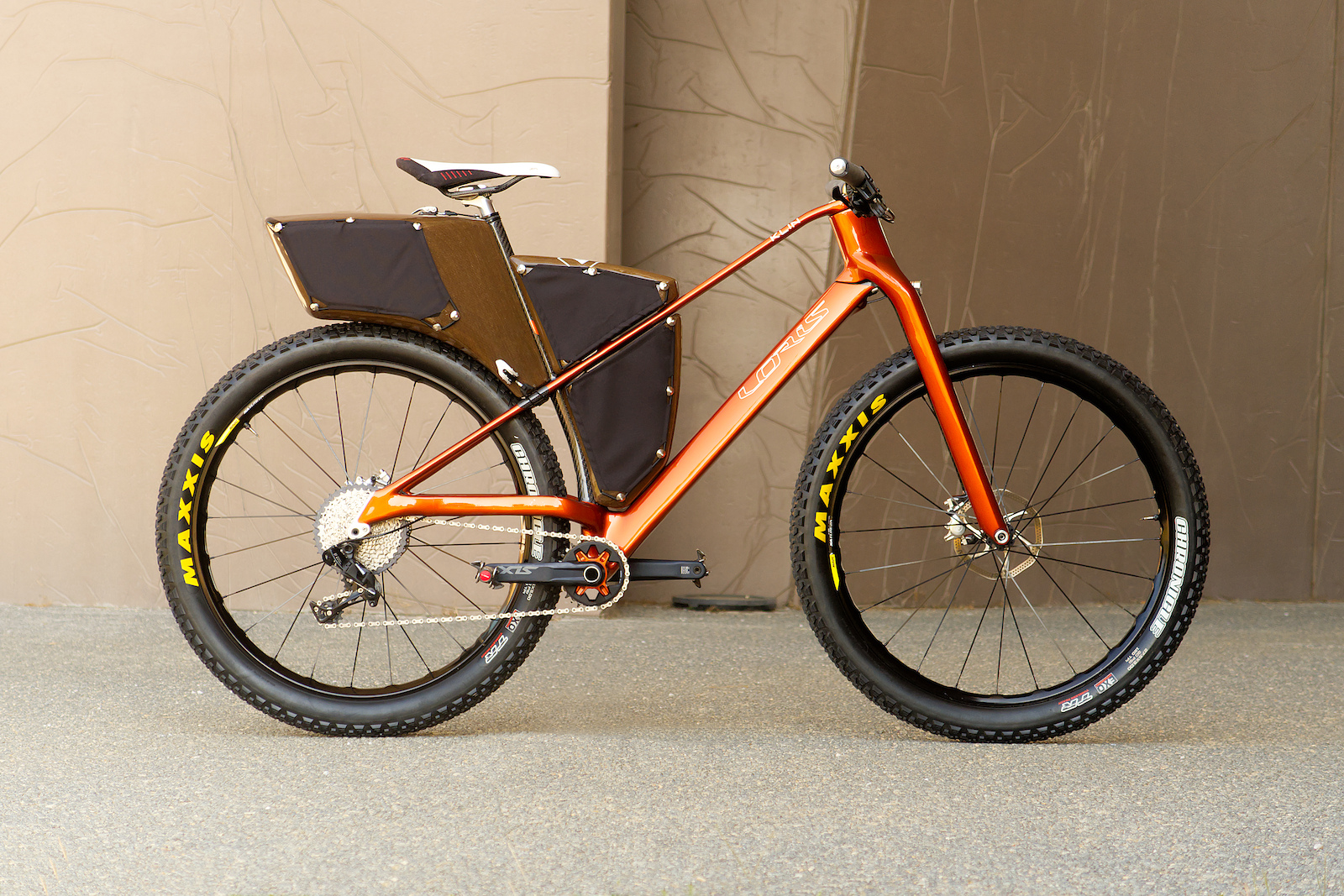 Every Concours de Machines has a new theme, and this year's was about bikepacking. Builders had to create new, imaginative bikes that met a set of rigid criteria: each bike had to support a 2-3 day bikepacking trip in the high Pyrenees, and therefore had to fit all the essentials for navigating, generating electricity, boiling water, setting up camp, sleeping, communicating with the outside world, and documenting the trip. The bike also had to, of course, function as a bike that would be rideable for multiple days and nights on all kinds of terrain.

Laurent Lamouric, known as his bike building name, Loris Fibre, is a mechanical engineer who built his first bike in 2016. While he now builds a variety of bikes, they are personal projects for himself, not for profit. His process is ideal for building wild one-off designs, not production models, so he focuses on creating crazy builds for the love of it.

For this year's Concours de Machines, Loris decided to make a full carbon fiber bike that could function with or without the gear compartments, which are made of flax fiber. While a bikepacking bike needs to have ample storage, it also needs to ride well, and Loris made sure that the compartments could be removed so that the bike could be ridden as simply a bike whenever it wasn't overlanding. As for the compartments themselves? Loris tested the concept of rigid storage spaces in the 2018 competition, in which he placed second. The rigidity, he says, helps protect the contents, while the integration with the frame eliminates the need for racks and helps keep the overall system weight down.

In designing the bike itself, Loris decided to go with a fully rigid setup and internal routing for the sake of simplicity, to reduce the possible mechanical problems that could take place. He chose 27.5"+ tires for comfort. 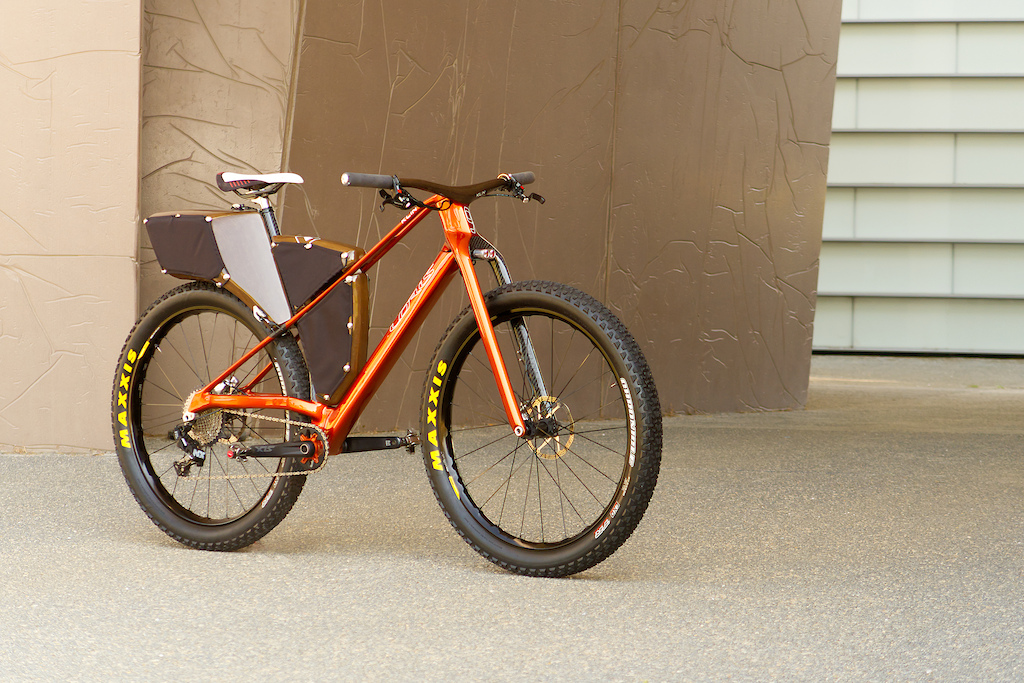 Loris is most proud of what he calls the "rudder," the front assembly made up of the one-piece fork-stem-handlebar assembly. That piece actually contains a sleeve where the front triangle fits together - until the fork assembly is installed, the top tube is not connected to the downtube. 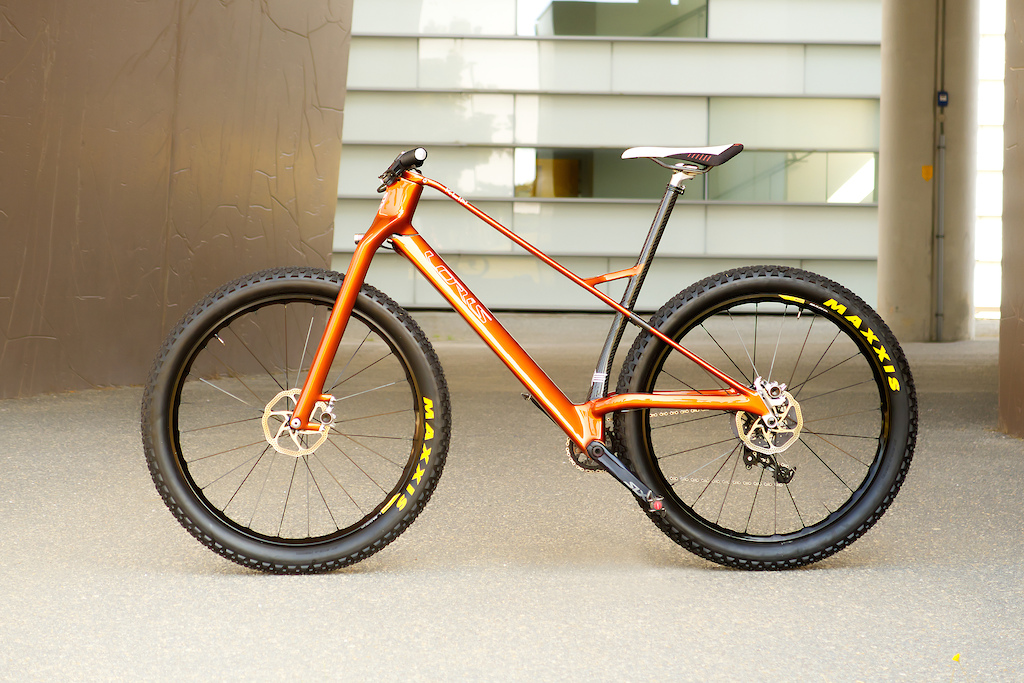 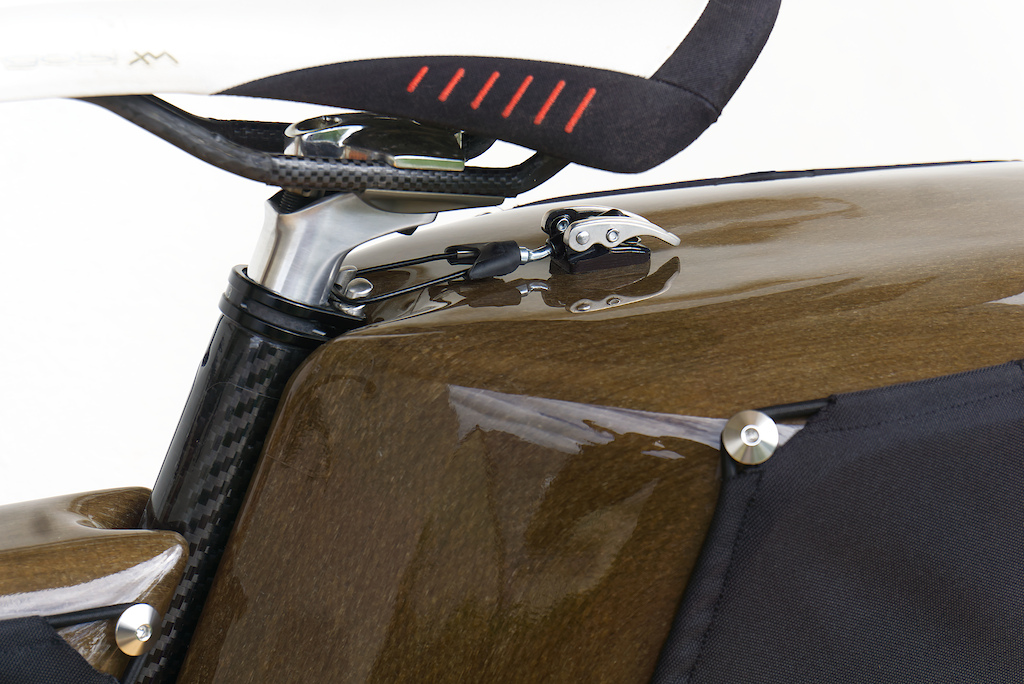 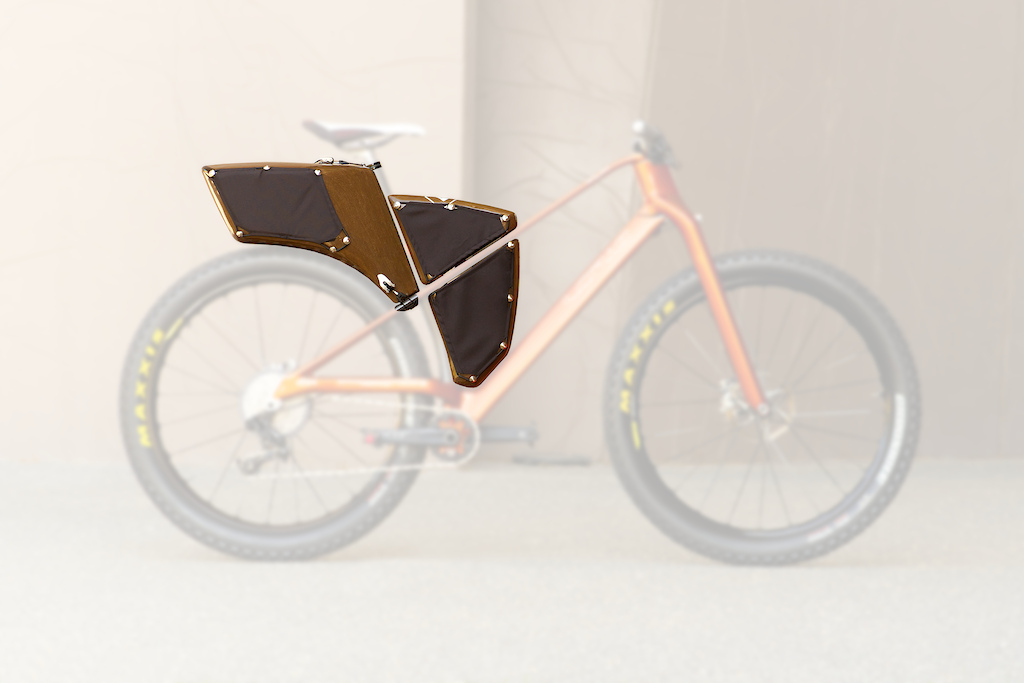 The bags, if we can call them that, are one of the more fascinating parts of the design and are made out of flax fiber with canvas hatch access. 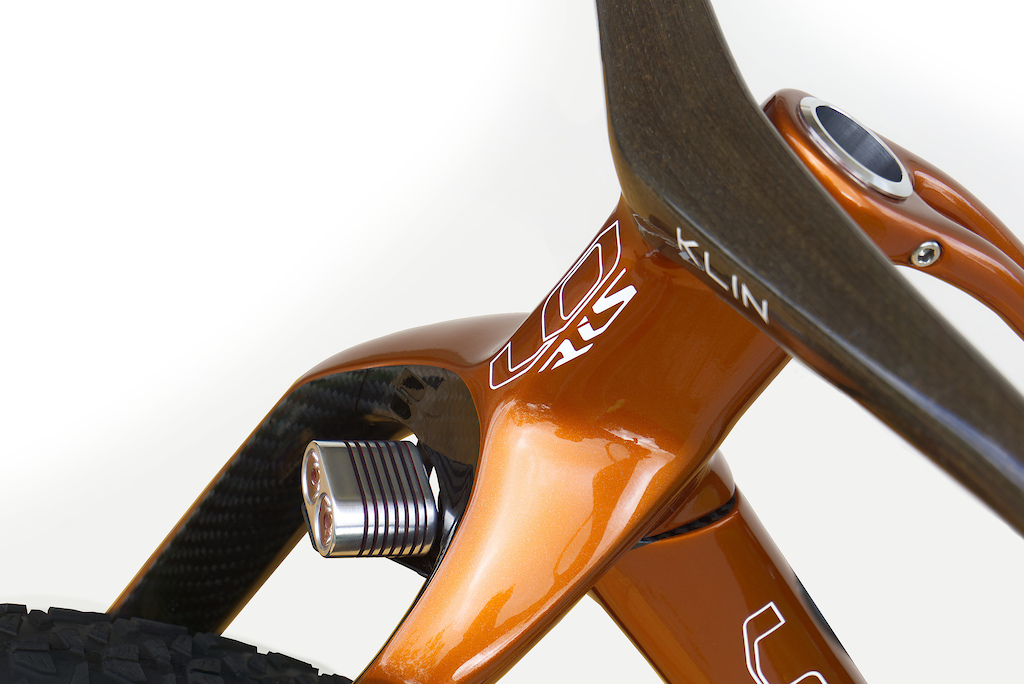 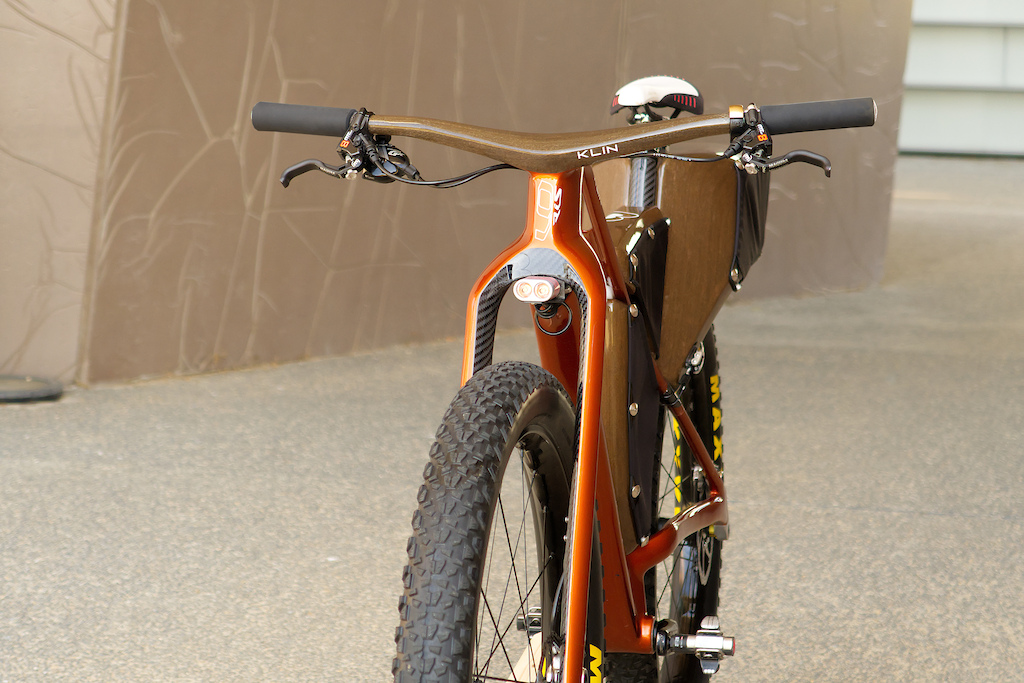 The build is all about integration. It would be easy to focus only on the bike and the bags, but the lights are also fully integrated and can be recharged with battery packs that Laurent himself designed and made. The battery packs fit in the headtube and also charge a GPS unit, which fits to a mount on the battery pack, thereby sitting on top of the headtube for readability while riding. The design is beyond clever. 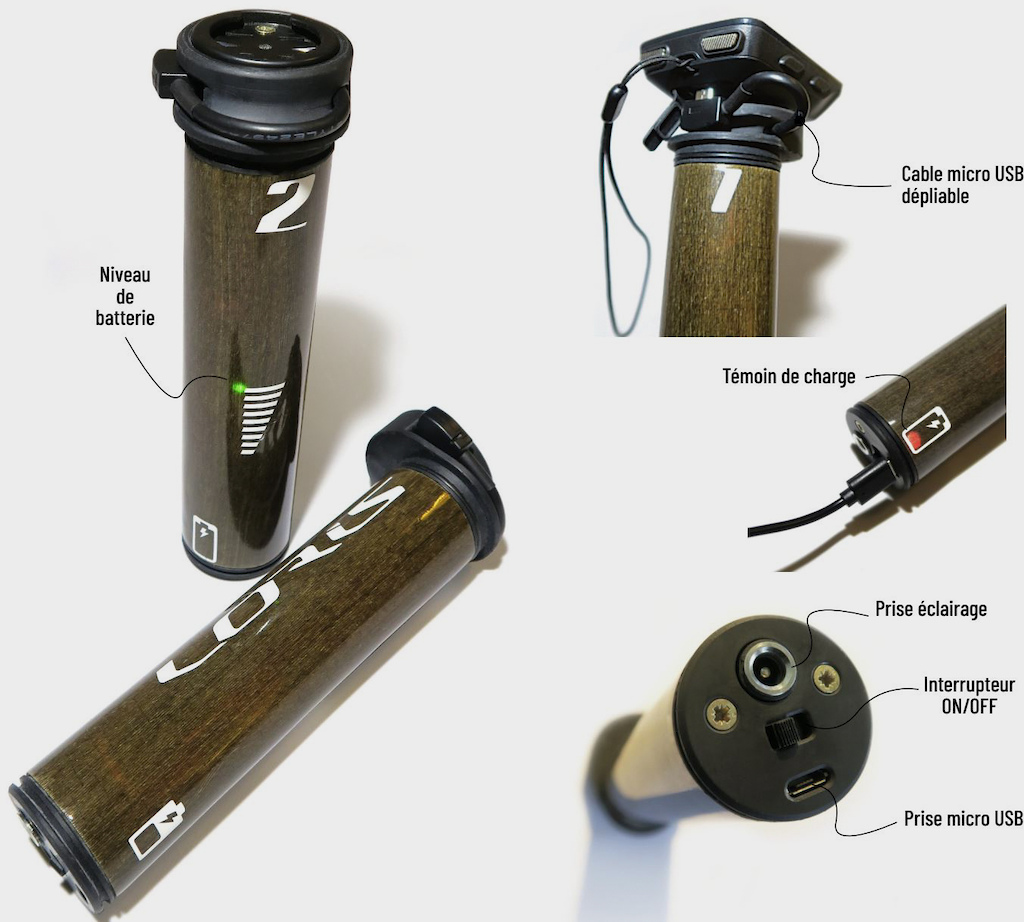 The Loris battery pack. He designed the unit for the 2018 competition but has refined it since then, adding an on-off switch, a battery power indicator, and GPS integration. The parts are 3D printed, assembled, and covered in flax fiber. 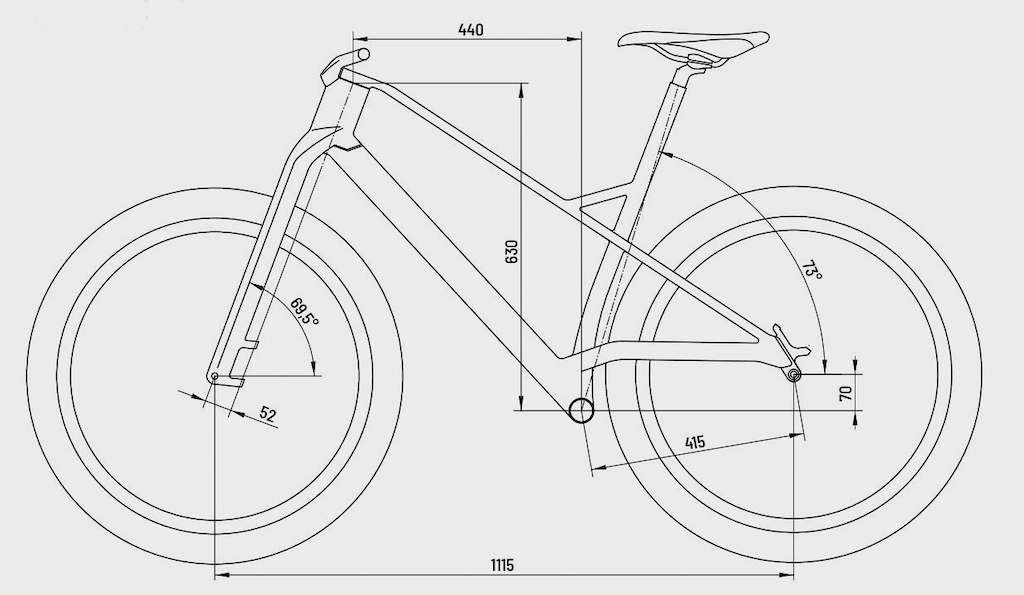 With that geo, it's no enduro bike, but it looks perfectly comfortable for exploration and adventure. Loris said one of the main goals of the bike was to distribute the bags' weight effectively. 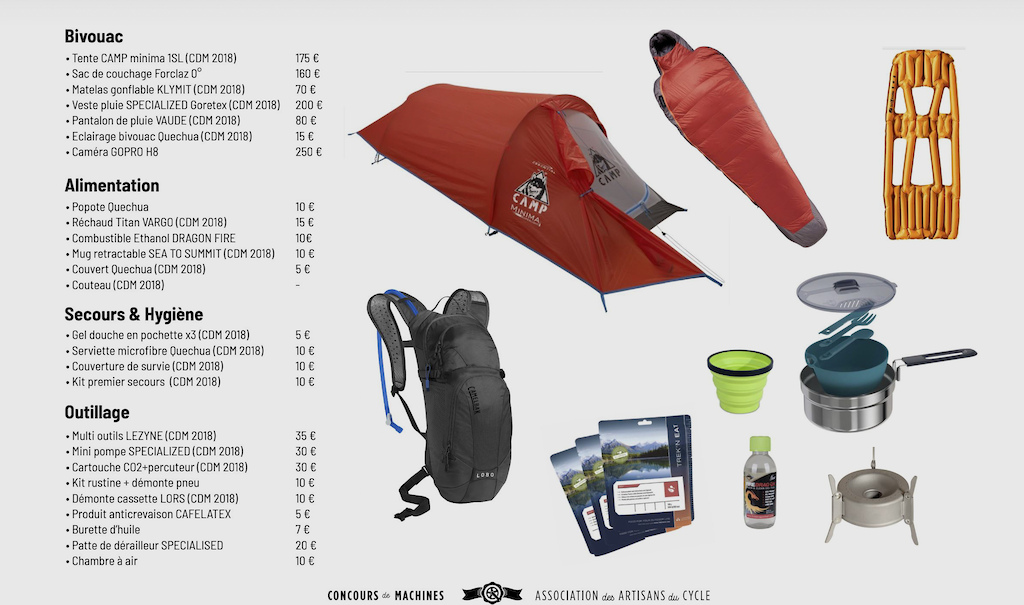 What's inside the bags? All of the above. 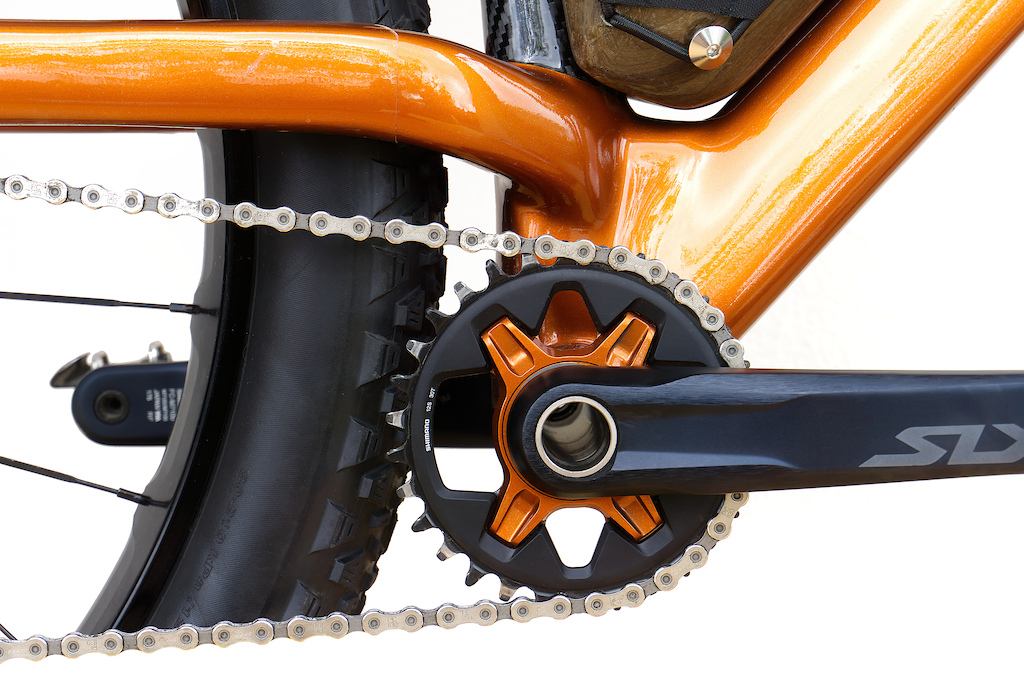 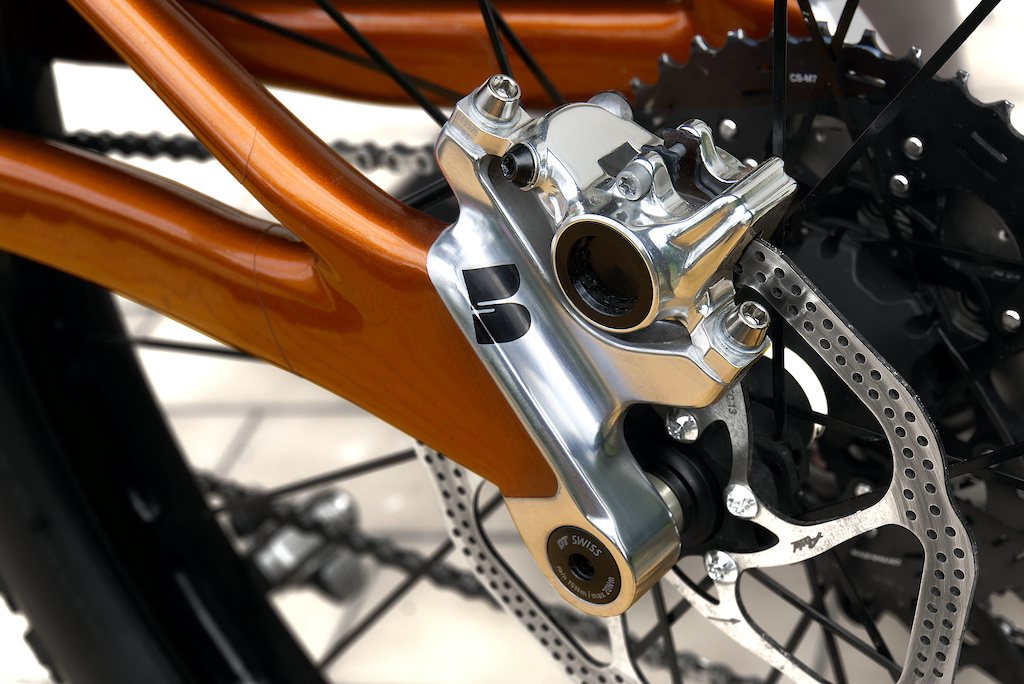 The bike uses parts from Shimano, SRAM, and Magura. While the bike itself is top-of-the-line, it's interesting to see SLX in the mix, and Loris was clearly very intentional about each of the component choices. 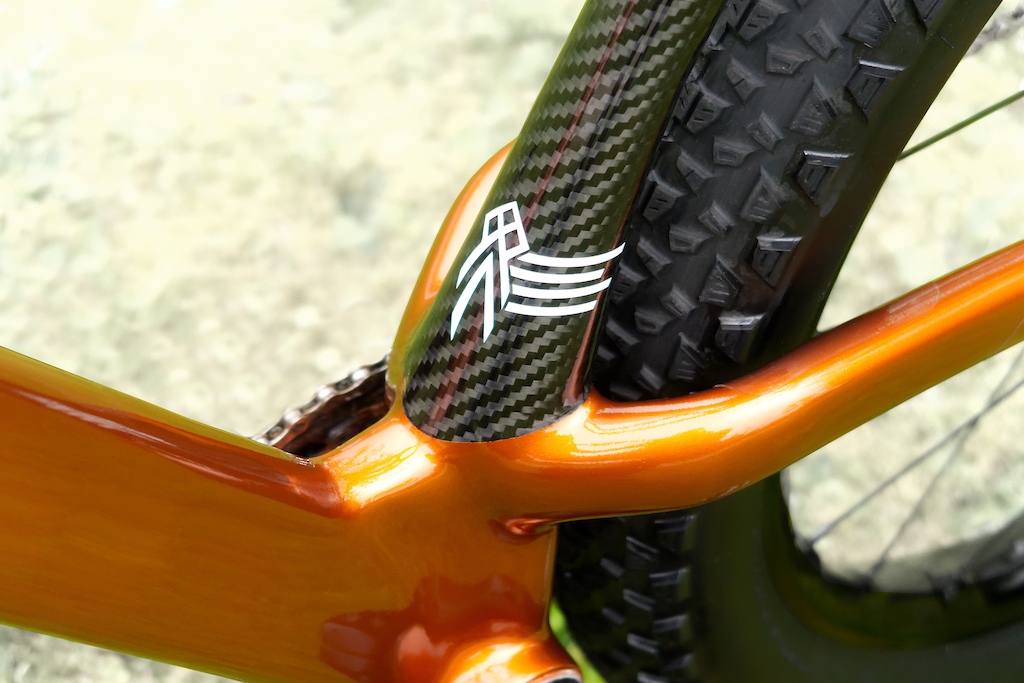 The attention to detail here is superlative.

bman33 (Nov 19, 2021 at 11:04)
Wow...bike packing isn't my thing, but that is a very sexy machine with fantastic attention to detail. My only point would be that 'IF' I was getting into bikepacking, I would want a tad bit of fork suspension at least.

danstonQ (Nov 19, 2021 at 12:04)
You don't need front suspension with such rubbers...
... also strange for a bike-packing purpose not to have... simple bottle carriers, na?
That "detail" apart, this "Concours des Machines" is every year a goldmine in term of creativity and challenges. I love it!

number44 (Nov 19, 2021 at 14:41)
@VtVolk: I assume you're joking, because like all of us bike packers you have a healthy size brass ring piercing in your scrotum; so you you can dangle your dangle from your danglers.

VtVolk (Nov 20, 2021 at 7:48)
@number44: my scrotum ring is 3D printed titanium, so isn’t really weight bearing. I usually clip my dangle mug to one of the waxed curls of my mustache instead

Chonky13 (Nov 20, 2021 at 10:46)
@Explodo: I've ridden trails at Bootleg with a rigid Karate Monkey 27+. It was surprisingly confidence inspiring! This future-bike is sexy/flexy.

bman33 (Nov 20, 2021 at 18:09) (Below Threshold)
@kylar: I have been riding MTB since 1994, BMX /DJ even longer. Can I ride o et a "1 inch bump" just fine. Would I rather have a bit of suspension on the front of my fork with today's technology while backpacking at my age? Absolutely. My apologies if my writing doesn't 100% conform to yours. Look me up next time you're out to get my area and we'll see you can ride "bumps" the best. So much sh*t talking on PB lately

I was replying directly to the commenter who said that suspension is needed for bumps over an inch.

tommy2bliss (Nov 19, 2021 at 11:03)
Absolutely stunning. Curious what the rear tire clearance is to the seat bag, doesn’t look like much but could be the angle.

RSN333 (Nov 22, 2021 at 12:34)
I had the exact same thought. While aesthetically stunning and crazy clean, it looks like tire clearance might benefit from minor increased spacing but that is remedied by a slightly smaller tire as well. My biggest gripe would be bikepacking without a Pinion or Rohloff belt-driven drivetrain. Nothing grinds my gears more than grinding gears on a gritty, sandy bike tour.

jomacba (Nov 19, 2021 at 11:36)
I can honestly say I'm not a fan of the concept or overall design, BUT!!! I do appreciate the time and energy that went into this, and I truly love the execution. Great attention to detail.

Breeconay (Nov 19, 2021 at 17:27)
Its because SLX is like 10 grams lighter than xt for some reason. My source is from: www.worldwidecyclery.com/blogs/worldwide-cyclery-blog/shimano-drivetrain-comparison-xtr-vs-xt-vs-slx-vs-deore-video

iamamodel (Nov 20, 2021 at 13:51)
I recently weighed SLX and Stylo carbon cranks and the SLX were were only a few dozen grams heavier. I was extremely surprised.

VTTyeahyouknowme (Nov 19, 2021 at 12:21)
A few points about bike packing with a carbon frame/everything: it’s actually easier to repair in the field if it’s not completely snapped apart (a tube of DP420 and 50 grams of woven dry carbon cloth and you have a full repair kit

starting with a lighter bike is important because you’re adding so much crap to it and going from a 25 lb bike to a 40lb loaded bike is so much easier to push up the inevitable unrideable hills. All that said, I’d take a dropper post over front suspension any day; moving the seat bag weight down makes a massive difference in handling (on top of just having the clearance you get from a dropper.)

Using a touring boot buckle for attachment at the seatpost. fuego

PMC (Nov 19, 2021 at 11:59)
looks to be built around someone in that 183cm range, ship that thing on over to the PNW and I'll take a turn on it. My first thought was ugh, second was hmmm, third was that is my size and I have a couple good bike packing routes I can ride from home.

CSP (Nov 20, 2021 at 2:21)
Would like to know, does the bag over the rear tyre have side movement when riding/pedaling?
Can't see how its tied on properly, I know my Apidura seat bag moves whilst pedaling.

bproelofs (Nov 19, 2021 at 11:25)
I feel lazy and stoopid compared to Laurent. Amazing in every way. The dedication, attention to detail, craftsmanship... inspiring.

Will-narayan (Nov 20, 2021 at 16:02)
Same here. Well I wouldn't say I'm stupid, I like to think and design things, but I'm discouraged at the mere thought of going through the whole skills learning curve. I'm kind of envious of these guys who'll tackle anything on their own as my brain just doesn't see the point and would rather be part of a team where there are different skills than to learn to do everything myself.

HairyLegs (Nov 20, 2021 at 4:28)
I would imagine this is more bikeglamping vs bike packing ... riding from one hotel to the next, and frankly that sounds like a flipping awesome idea to me.

beerrun (Nov 20, 2021 at 8:27)
Seems like a lot of weight on the rear end? With a weighted bike your front end would be all over the place, especially on a climb.

andrewbikeguide (Nov 22, 2021 at 12:24)
Any bike packing bike I end up with will use this system: aeroe.com/products/spider-rear-rack
and definitely have a dropper post

jesse-effing-edwards (Nov 19, 2021 at 11:12)
Being 50km deep into a bike packing trip somewhere remote and then having a rock chip and compromise my carbon frame seems like a nightmare. Looks cool, but I feel like for this kind of experience I'd want something more old fashioned like steel. I only really like biking down hills though, so I may not be the target market.

konamat (Nov 19, 2021 at 11:36)
Forget about the solo bikepacking trip around the world and just focus on the pure beauty of that thing.

jesse-effing-edwards (Nov 19, 2021 at 19:30)
@NorCalNomad: ever since my friend's Rocky was warrantied from chain slap which led to the whole rear triangle being compromised, I've had no interest in the material. It just breaks in wierd and unpredictable ways. Like my buddies cranks that where the pedal end of the crank just detached one ride. It's weird matetial to use on something that gets bashed and scratched.

Niki82 (Nov 19, 2021 at 12:21)
Clearly nicer than anything I could design but I find chainstays that are above chain line triggering.

Maxxis if you read this. Bring back the Chronical in 29+

Will-narayan (Nov 20, 2021 at 15:59)
The contest also required to try to use second hand parts. Specified as not mandatory but could have a play in the final choice, so that may explain the rotors and the saddle, which doesn't fit the bike IMO.

whiteboarder (Nov 19, 2021 at 11:27)
while amazingly awesome - would be great to see an actual prototype. renderings of interesting ideas are nice, making it happen - a whole different story.

whiteboarder (Nov 20, 2021 at 9:12)
@alicialeggett: not wearing glasses, a dim phone screen had this look like renderings.

kudos and my apologies!