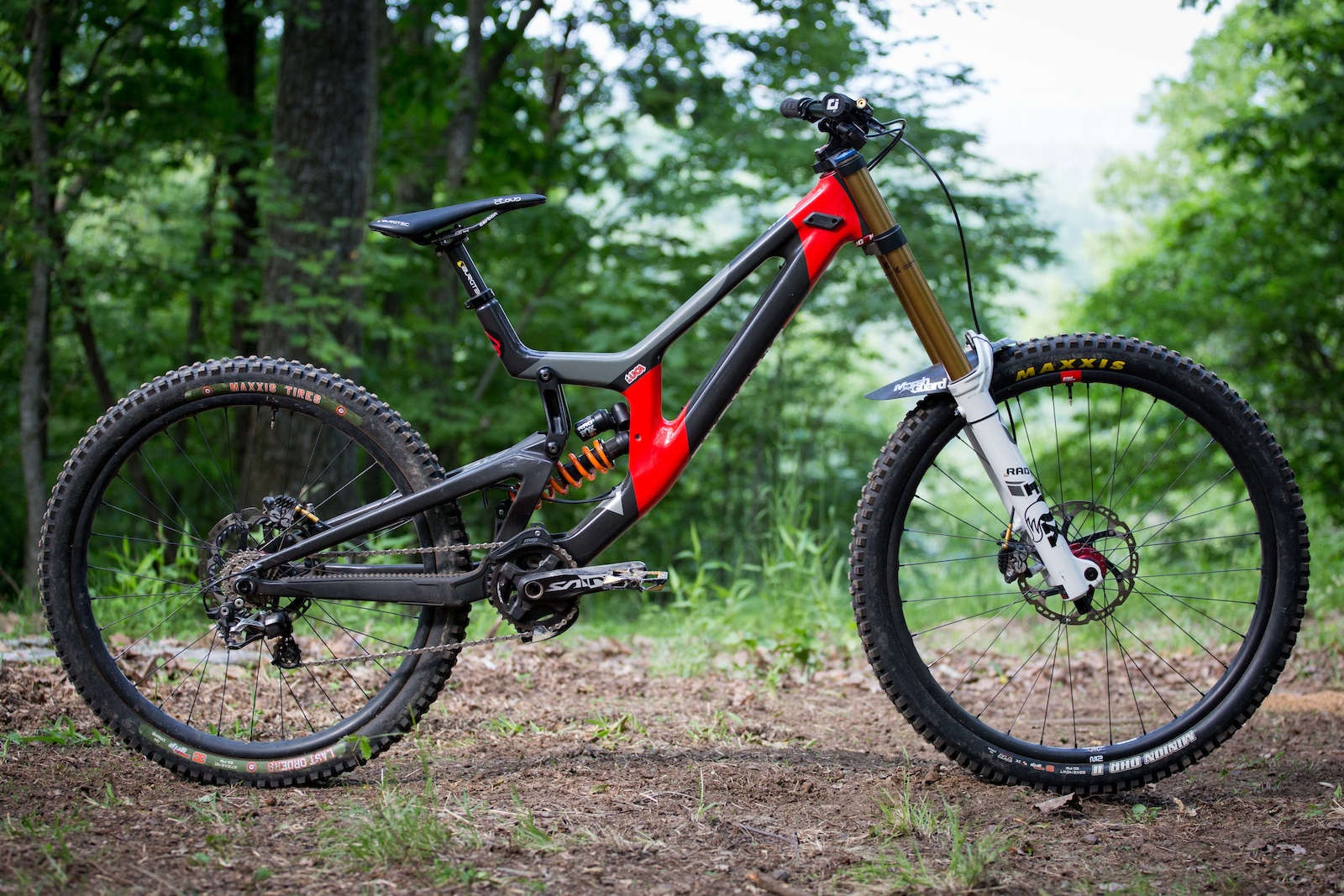 Santa Cruz Syndicate rider Luca Shaw has been riding consistently faster with finishes steadily climbing up the scoreboard. After a number of top-20 finishes last season and then starting the beginning of this season with a 2nd place at the Windrock Pro GRT race in March, he was primed for a strong season until plans changed.

Travel on hold, Luca says that it's felt obviously strange not racing World Cups and having a clear goal in mind, an adjustment to say the least. Since the Lousã race was canceled, Luca says he's ridden his DH bike once up until this weekend but has been training otherwise and working to make a new plan and be ready as possible once World Cups resume.

What does training look like? A lot of bike riding and going to the gym a couple of times a week to maintain strength. Other than that, he's been trying to ride the dirt bike as much as possible and has taken some time to work on projects around his house in Western North Carolina.

Luca says that he misses the adrenaline and buzz he gets from racing top tracks with the top riders in the world so hopefully the weekend at Windrock helps a bit with that. 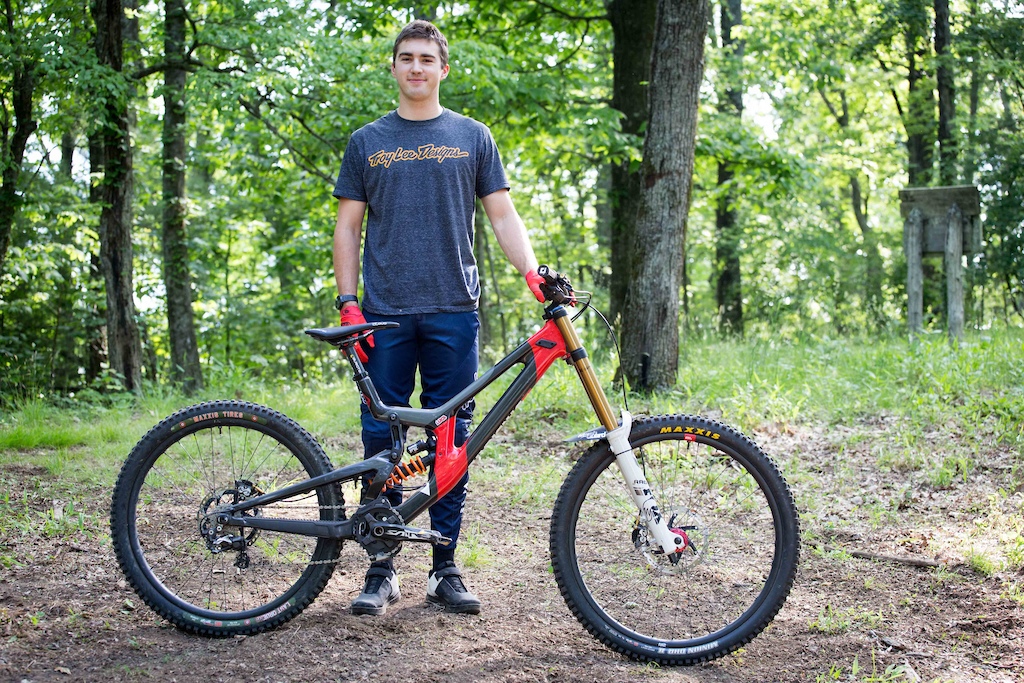 Rider Name Luca Shaw
Age: 23
Height / Weight: 175 lbs / 79 kg; 6' / 182cm
Hometown: Pisgah Forest, NC
Instagram: @luca_shaw
This weekend at Windrock, Luca has his V10 running with a 29" wheel up front and 27.5" wheel on the back. Riding a size XL fame, he has stock links with a prototype rear end to fit the smaller rear wheel, giving the bike the same geometry as a stock V10 29'er. A lot of folks refer to this as a mullet set up but Santa Cruz calls it mixed, or "MX" for short.

He's been working with his mechanic, Tom Duncan, on getting everything set up and running as well as possible throughout the off-season. 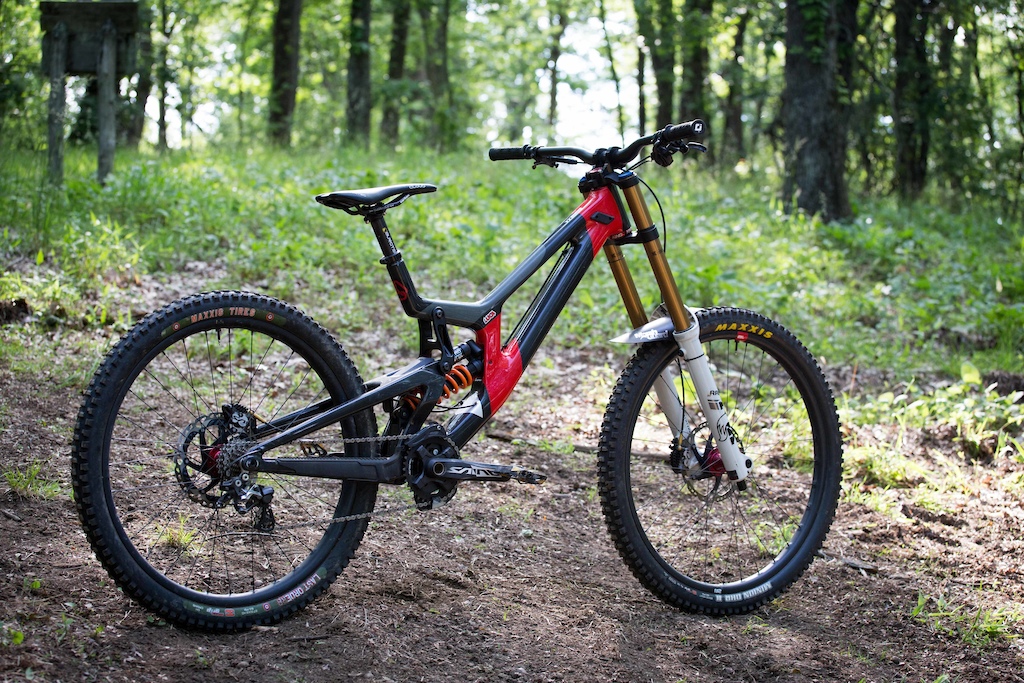 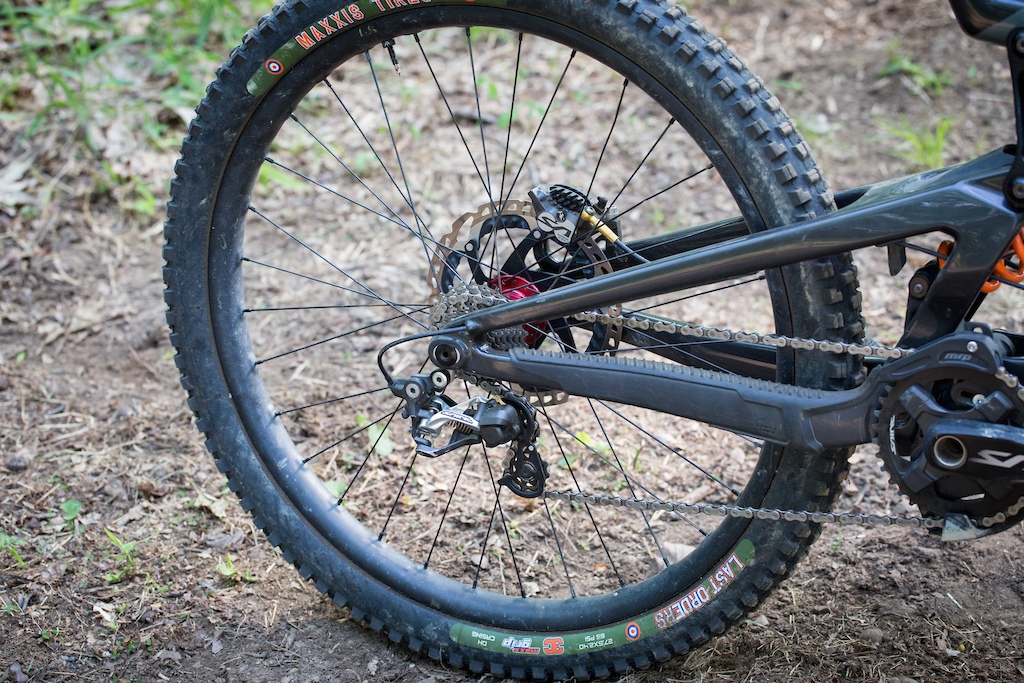 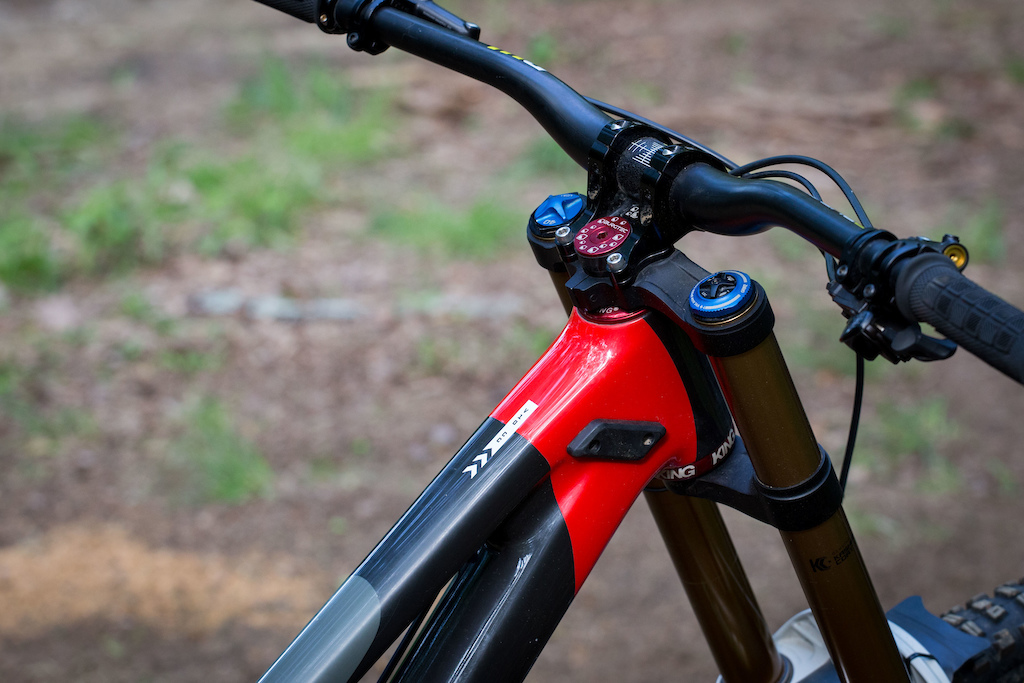 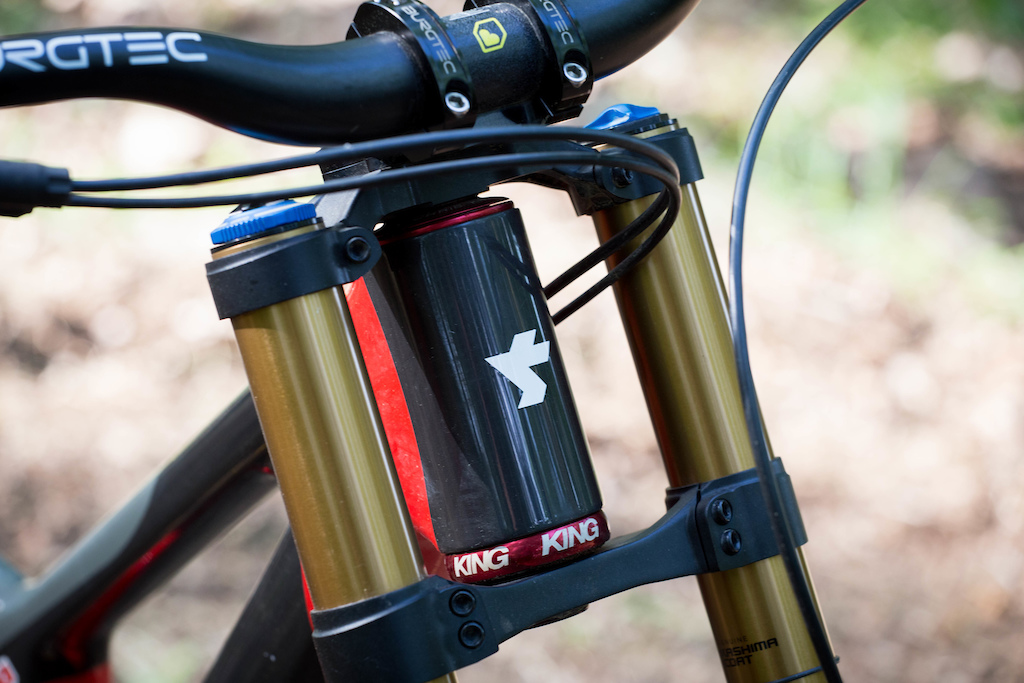 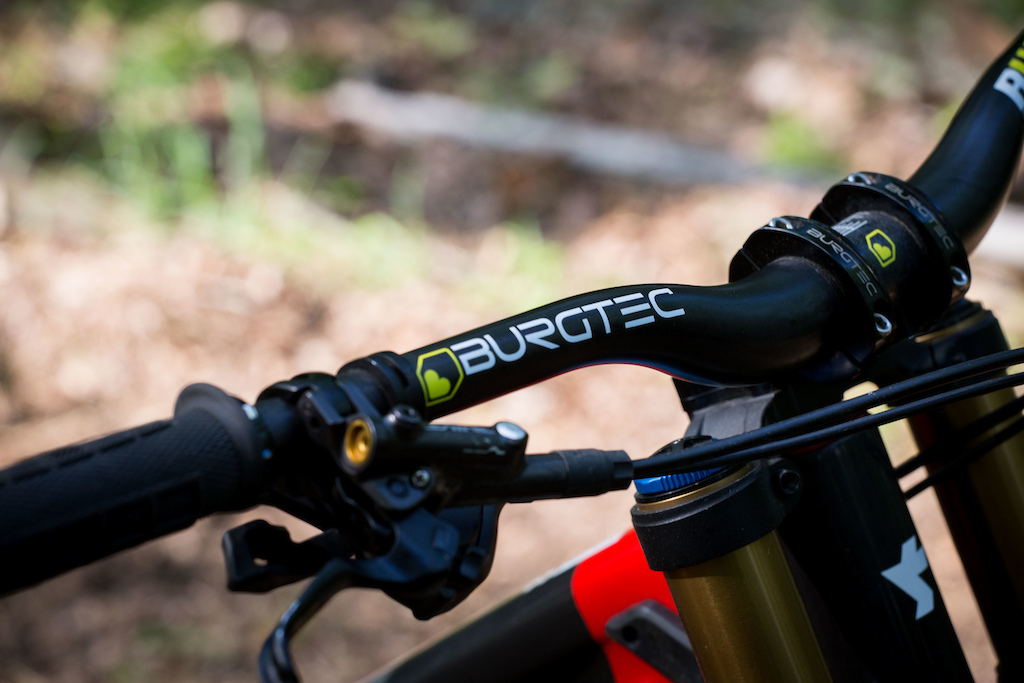 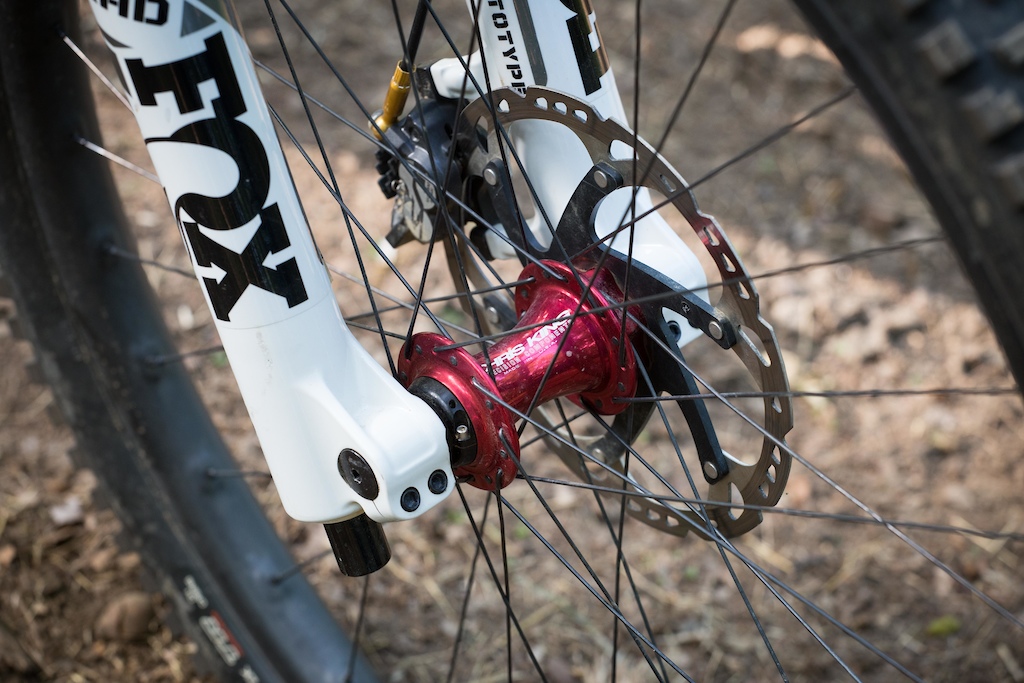 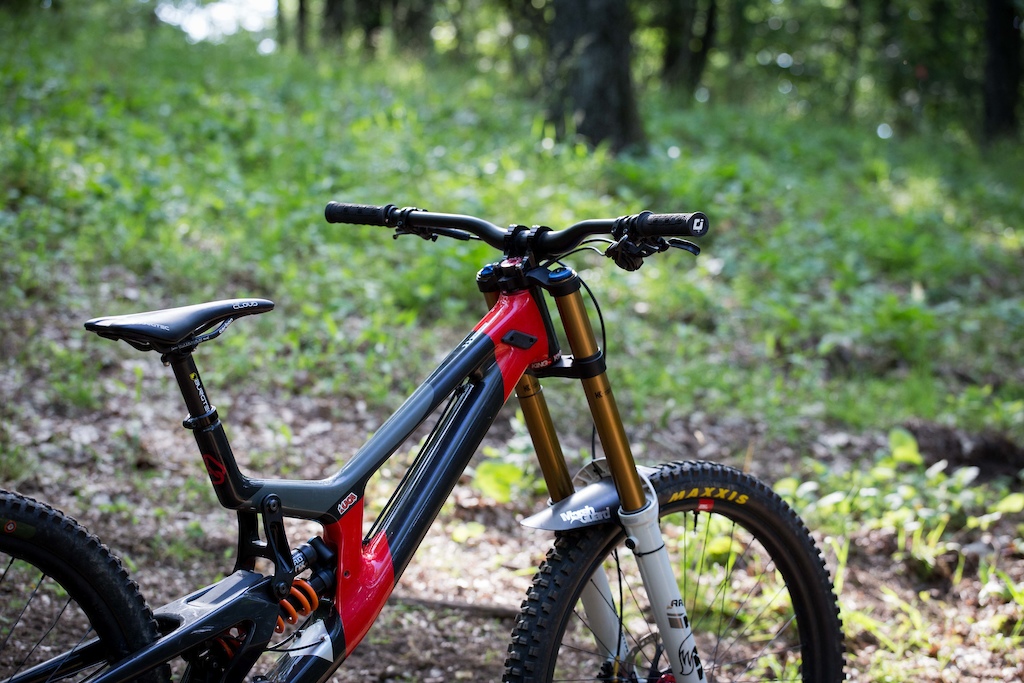 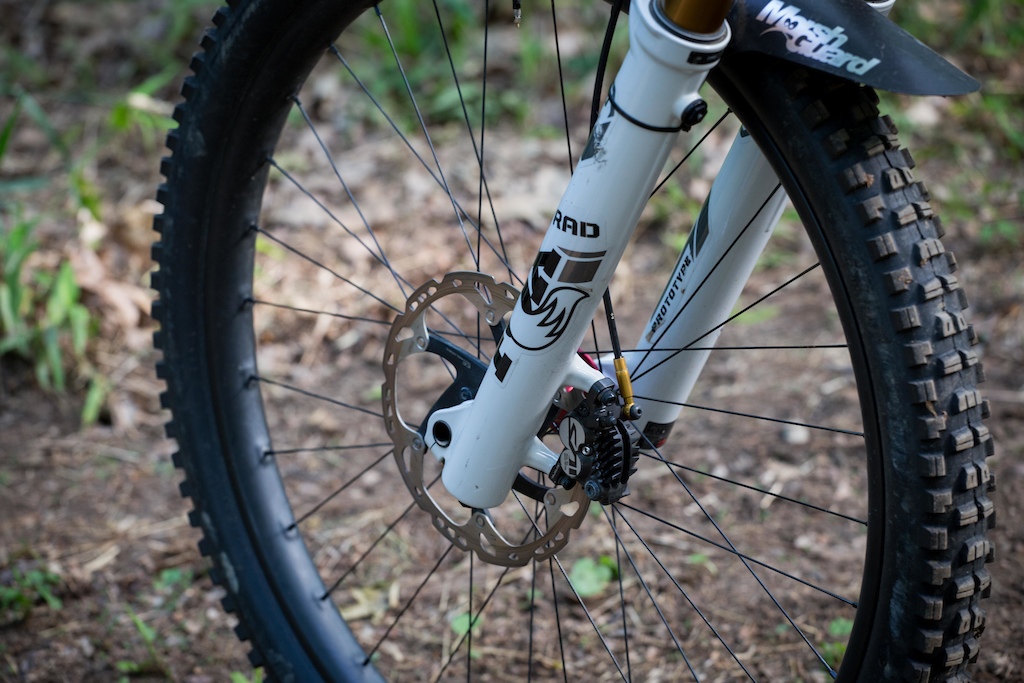 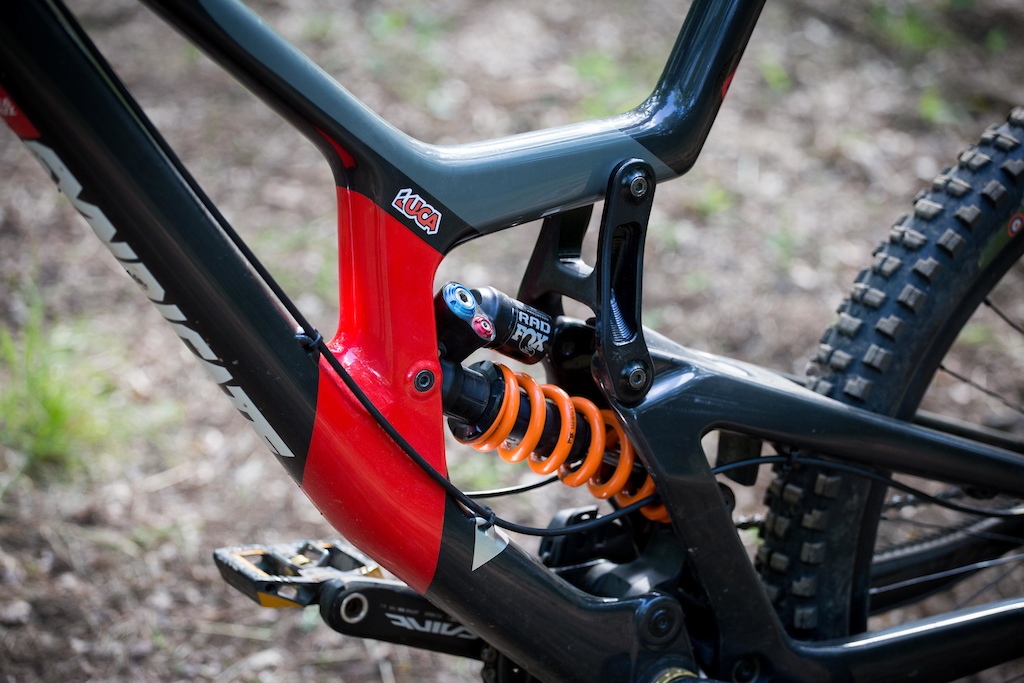 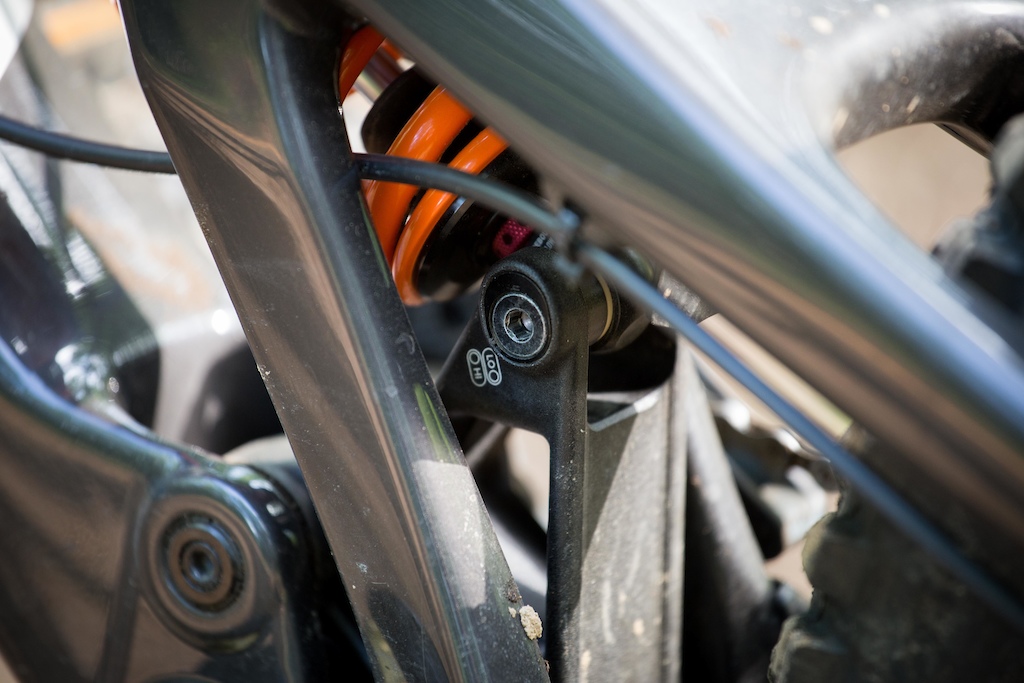 Rear suspension is managed by the new Fox DHX2 and a 550lb spring. 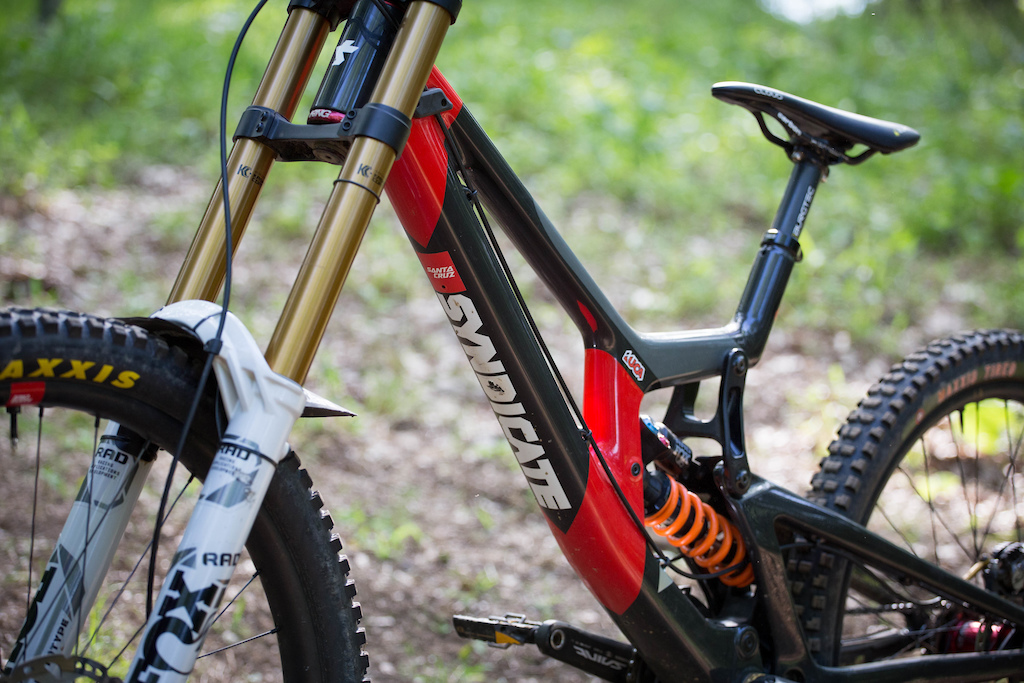 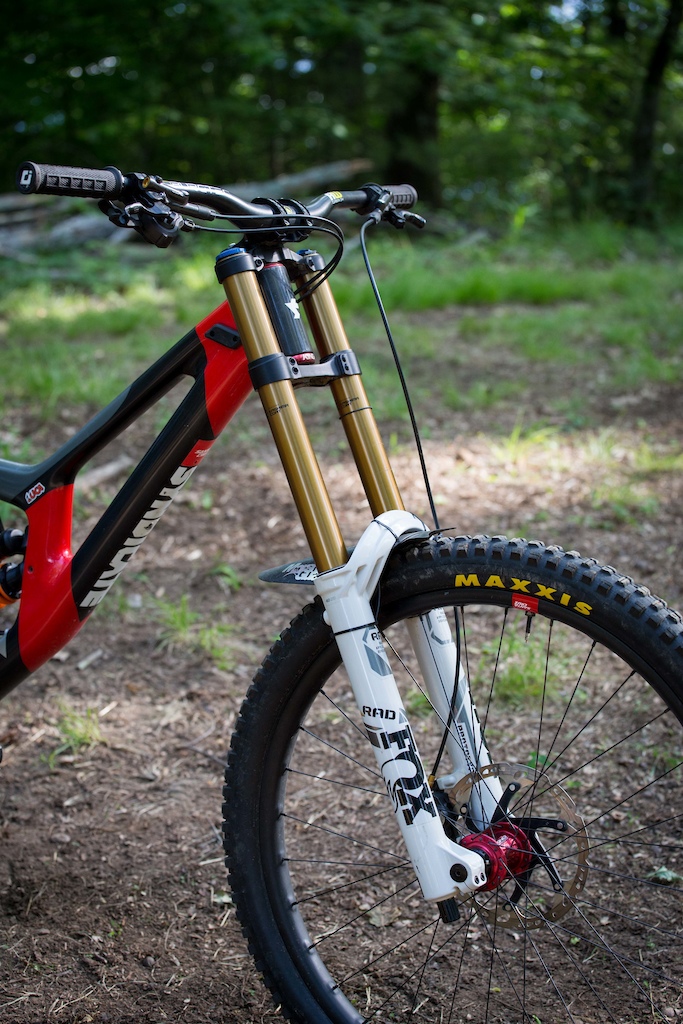 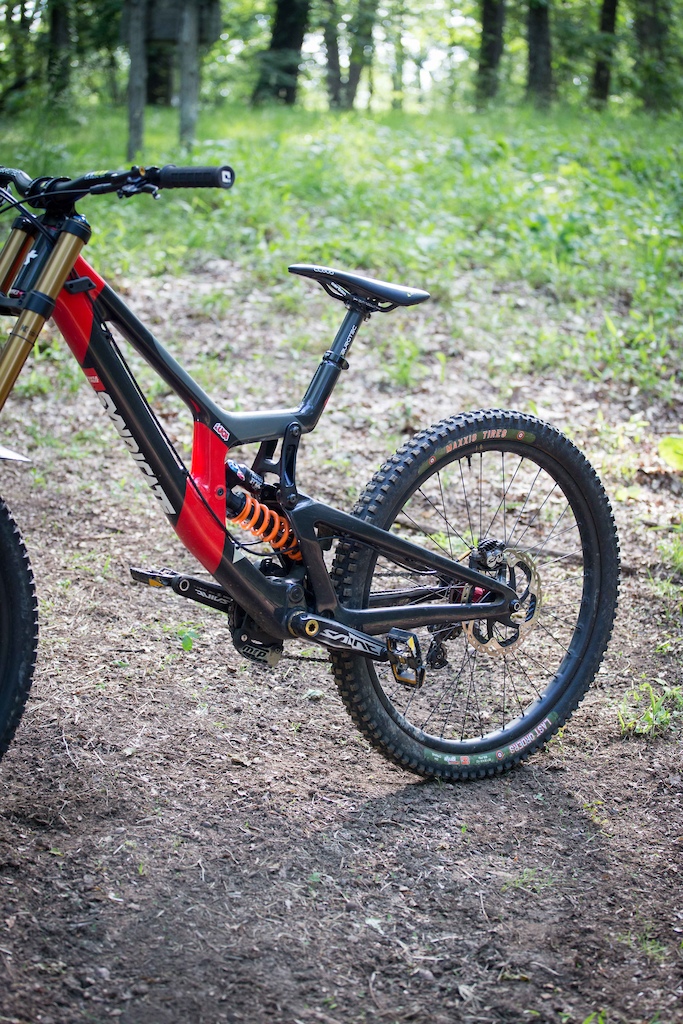 KennyWatson (Jun 7, 2020 at 19:40)
It's a pretty interesting outlier in this hyper-marketed sport of latest and greatest and forced obsolescence for sure. I mean the number of people who still default to saint brakes regardless of drivetrain is pretty wild. In a way you could say the fact that Shimano has not felt a need to update is it evidence in itself.

Ride406orDie (Jun 7, 2020 at 20:14)
I'm still running my saint cranks, derailleur, shifter from 2 bikes ago. I could use a new derailleur as I smashed mine but the damn thing still shifts great.

Brownsworthy (Jun 8, 2020 at 1:38)
And the XT of the same vintage is probably the best all rounder imo. Got 2 bikes setup with it and no issues at all just general maintenance.

melonhead1145 (Jun 8, 2020 at 3:53)
I've ridden the most of the Saint groupset apart from the brakes. I've got XT on my trail bike and I hate them, the levers are nice, they are powerful, but the bite point is so inconsistent, and the free stroke adjustment is a joke, it does nothing. Are the Saint brakes much better?

PhoS (Jun 8, 2020 at 8:09)
@melonhead1145: The free-stroke adjustment only makes a difference if you get all of the air out first. See the recent Minnar/Marshy brake bleed post.

IllestT (Jun 8, 2020 at 9:53)
@PhoS: yeah, I concede about hubs. Shimano hubs are terrible, but everyone knows that. To the point where I don't even mentally include them in a groupset

ts080 (Jun 8, 2020 at 10:11)
I don't think any rider at Luca Shaw's level has the freedom to ride what he actually likes, they either tell sponsors to create the thing that he dreams of or just choose from what they currently offer. That being said... something that's designed more than 8 years ago (more than 11 years if you're talking cranks) and still run by the best of the best competing at the absolute top of any sport is definitely remarkable.

MikerJ (Jun 8, 2020 at 12:14)
@melonhead1145: No. Powerful. Durable. Bleed easily. But the wandering bite point on colder days was too much for me. Also, the constantly clanking pads sound like a loose headset.

thenotoriousmic (Jun 8, 2020 at 18:10)
@ts080: They don’t have any choice. They have a hand in development but someone like shaw or rude wouldn’t get a new groupset if they didn’t like the current one.

maxyedor (Jun 7, 2020 at 19:54)
Interesting tire choice, that’s what, a 4 year old tire at this point? Seems like it would be better kept as memorabilia since I doubt the rubber is all that fresh and it’s not like 27.5 Maxxis DH tires are hard to find

I’d have liked to see: suspension settings (not just spring rates but sag, rebound and compression too), the story behind how that rear tyre ended up on there, the reasoning behind having cooling fins on the rear rotor but not on the front, plus any quirks which really make this bike unique to him.

C’mon PB, we’re all bike geeks here, you can do better!!

TheSlayer99 (Jun 8, 2020 at 13:51)
I guarantee you that no pro rider has any clue what there sag is off the top of their head. Sag isn’t important to suspension setup, why bother knowing it. Clearly aren’t a nerd if you’re asking for sag numbers.

chyu (Jun 8, 2020 at 14:11)
Because too many pinkbikers duplicate the settings to their bikes and straight up fail friday.

wohwee (Jun 8, 2020 at 23:25)
@TheSlayer99: Why does the rider need to know off of their head? Most pros are likely to have suspension settings recorded somewhere and refer to that when asked.
I didn’t say sag was important for bike setup. I just said it’s interesting to know these things, and that was one of many things I suggested to be included. No need to get hung up on it.
I sincerely hope you don’t get that easily triggered all the time...

jcc0042 (Jun 9, 2020 at 7:17)
@TheSlayer99: the importance of sag depends on the kinematics of the bike. Not sure if it’s still the case, but Transitions used to necessitate that the sag level fall within a small window. Otherwise the bike would behave weirdly at the sag point. I think it had to do with the shape of the leverage curve; some of the pre-SBG bikes were extremely poppy.

markcorrigan (Jun 8, 2020 at 2:46)
And there was me thinking Fox's orange forks from last year clashed with every single bike. Not sure why they've chosen white for all their sponsored riders, they look even worse somehow. Nontheless, that's some piece of gear right there. Very nice.

kusanagi72 (Jun 8, 2020 at 4:32)
Was thinking something similar; This bike would have looked so much better with black lowers.

sino428 (Jun 8, 2020 at 7:40)
@kusanagi72: I've always liked the general look of forks contrasting with the rest of the overall bike, like in this case the white fork while everything else is black.

Svinyard (Jun 8, 2020 at 9:38)
So being that he isn't a short dude and is on an XL, it'd be SUPER interesting to hear why he is on the Mullet setup and the pros/cons. I do wonder if it isn't ideal for all of these aggressive trail bike that aren't getting raced. Never ridden one tho. Like are they noticeably more fun? When Levy tested out the Instinct mullet, I don't think they talked much about which was "more fun" but mostly it was about speed...which isn't always the point.

friendlyfoe (Jun 8, 2020 at 21:50)
Regardless of how tall you are I'd guess it's the same issue of wanting to be in the back seat on specific features.

Sshredder (Jun 7, 2020 at 21:10)
I'd rather see a bunch of reliable parts than cross my fingers with new and improved. Wicked shuttle/ park bike .

anothermtnbiker (Jun 8, 2020 at 16:51)
Not sure why the MX setup is taking so long to catch on, hardly any brands are doing it properly with the right BB height. It’s been tried and true for decades on a motocross bike. It’s will make an absolute shredder of a bike.

KxPop (Jun 8, 2020 at 20:24)
@thenotoriousmic: Because the rear tyre on motorcycles (not just MX) are way bigger than the front. They still end up similar in total tyre+rim diameter though, so I'm not sure the comparison is great. The reasons for the rear tyre being bigger are all the same as you'd find for tyres being bigger in the MTB world, except that there's that much more power going through the rear tyre on a motorcycle. More traction being the key point, balanced with weight and power (too big and heavy and it's harder to spin up).

KxPop (Jun 8, 2020 at 20:34)
@thenotoriousmic: Sorry, just to make a long story short: It's done to balance weight with traction. Bigger tyre for more traction, smaller rim for less weight. On MTB it's kind of the opposite. You want the meaty front tyre for cornering traction, not a big rear tyre for acceleration/climbing grip.

NotSorry (Jun 8, 2020 at 4:19)
@zyoungson: While I agree with the 203 comment, as a heavier rider (but not an engineer) I enjoy the extra power a 220 gives on the front. On extra long descents I've noticed it reduces arm pump. I don't need to slow down faster than a 203mm rotor provides but it is nice to be able to use less pressure on the lever to achieve the same power. I've used the larger rotors previously on Codes and now MT7s.

HopeFbn (Jun 8, 2020 at 12:00)
@NotSorry: Arm pump, probably go and look for some nice grips that adequate better, check if your lever is in the right position for you, probably running other pads that give more bite, etc.

You haven't had any problems with bend rotors?, I have even smashed my fork lowers, I assume smash a bigger rotor should be just matter of time.

NotSorry (Jun 8, 2020 at 19:40)
@HopeFbn: I've tried just about every grip put there. I'm using Renthal Ultra Tacky now. I can keep a loose grip on them and still have confidence that they won't slip. Levers are in a good spot. Larger rotors mean less pressure on the lever to achieve the same stopping power at the tires as well as better heat management.

I've only bent one rotor ever and that was a 180mm rotor that hit a tree during a crash.

Ahh I was hoping this was an industry settling on the ultimate setup. Meaning, all I have to do is run my fork (no matter the type, length or rider skill) at 102psi and 5 volume spacers for life , and I am a bike savant????

MillerReid (Jun 8, 2020 at 9:42)
Having ridden windrock and knowing how steep that shit is... mullet bike makes sense. No 29er rear tire to ass buzz

blackthorne (Jun 7, 2020 at 21:22)
I hate Santa Cruz because of their ugly bikes, faux Boutique brand image, fake marketing segmentation be Juliana bikes, but I must admit their downhill offering works, and looks damn fine as well. Just stop pretending you’re some kind of originator, cause no, you’re the same as Fuji or Specialized. If you can’t own up to that, at least innovate.