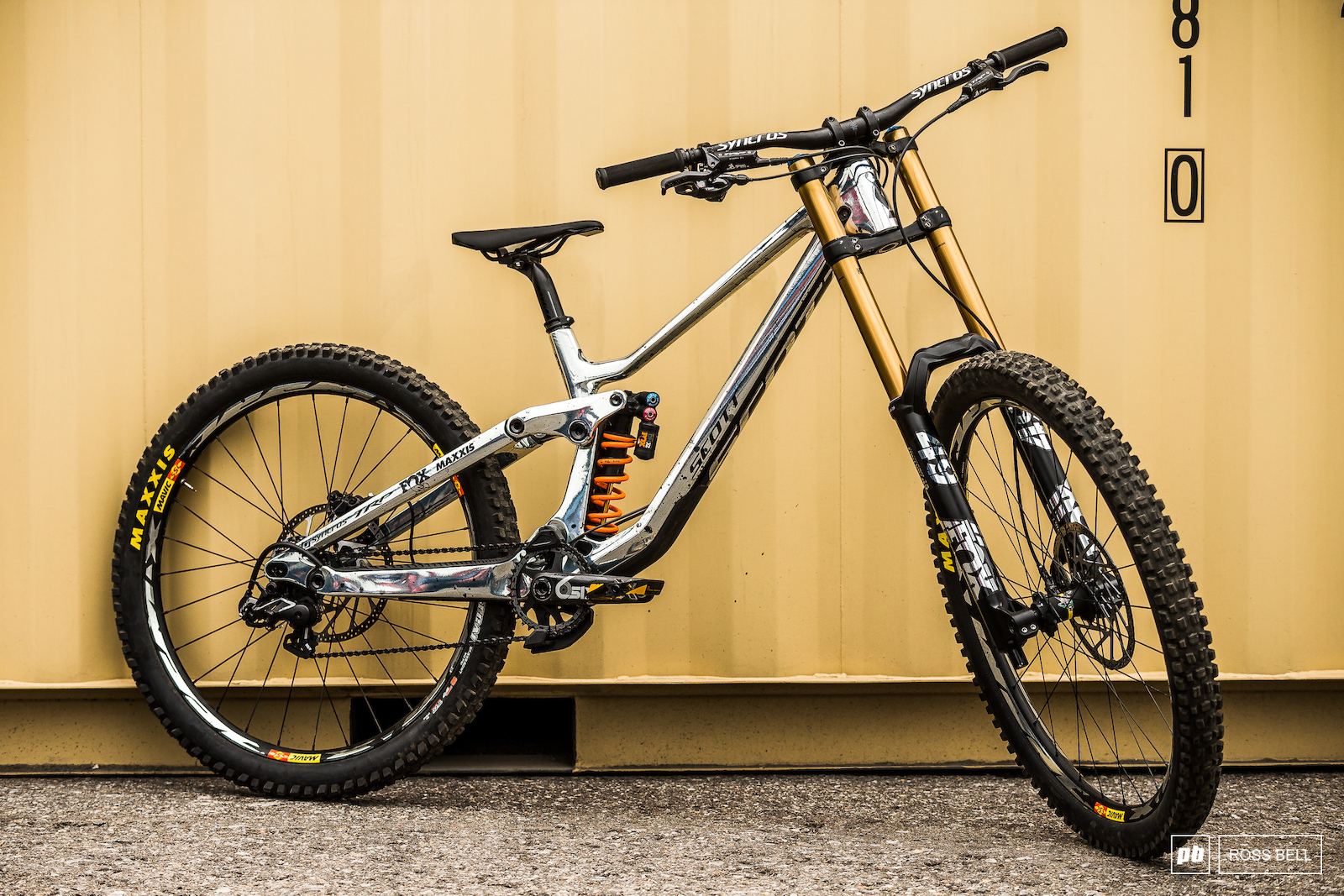 BIKE CHECK
Marine Cabirou's
Scott Gambler
Photography by Ross Bell
A fifth place, two fourths, two seconds, and two firsts spell the order in which Marine Cabirou has steadily risen up in the World Cup circuit this year. As the 2016 Junior World Champion, she's no stranger to the rainbow jersey.

Cabirou has only gotten stronger this year in her racing, as clearly shown by her consistent results and is a sure contender to take the top spot on the podium this weekend in Mont Sainte Anne. The 22-year-old from France is part of undoubtedly the strongest gravity team in the world this week as the French are in French Canada and poised to dominate as they have all season.

With her new team, it seems that Cabirou has settled into her Scott Gambler quite comfortably. Scott have made her a custom, chrome Game-of-Thrones-themed one as she looks a bit like Maisie Williams, the actor who plays Arya Stark on the show. Let's check it out. 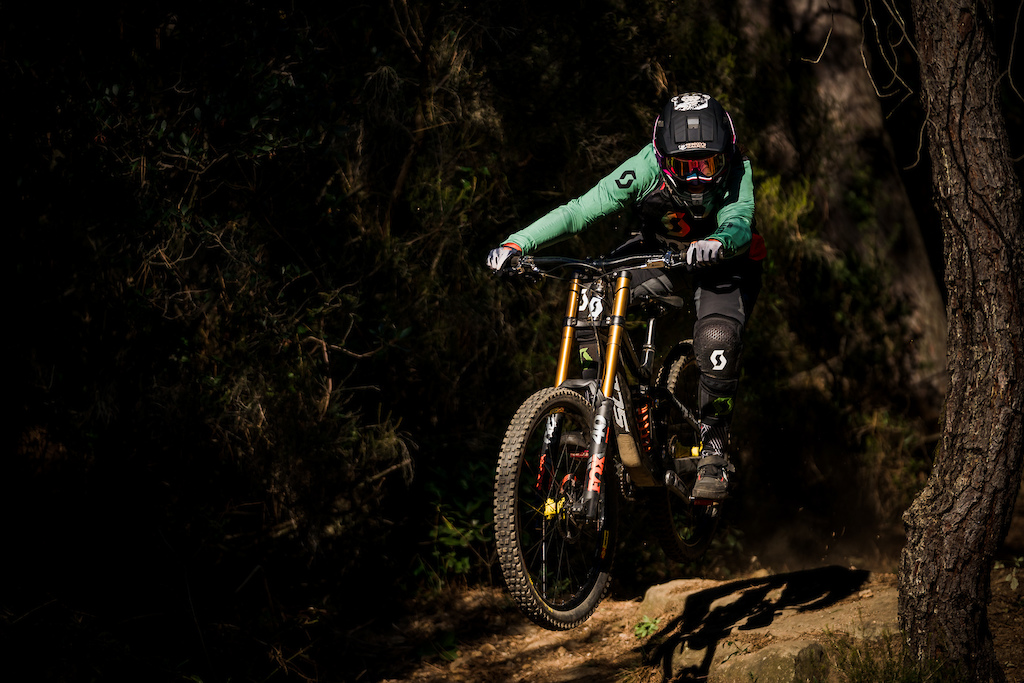 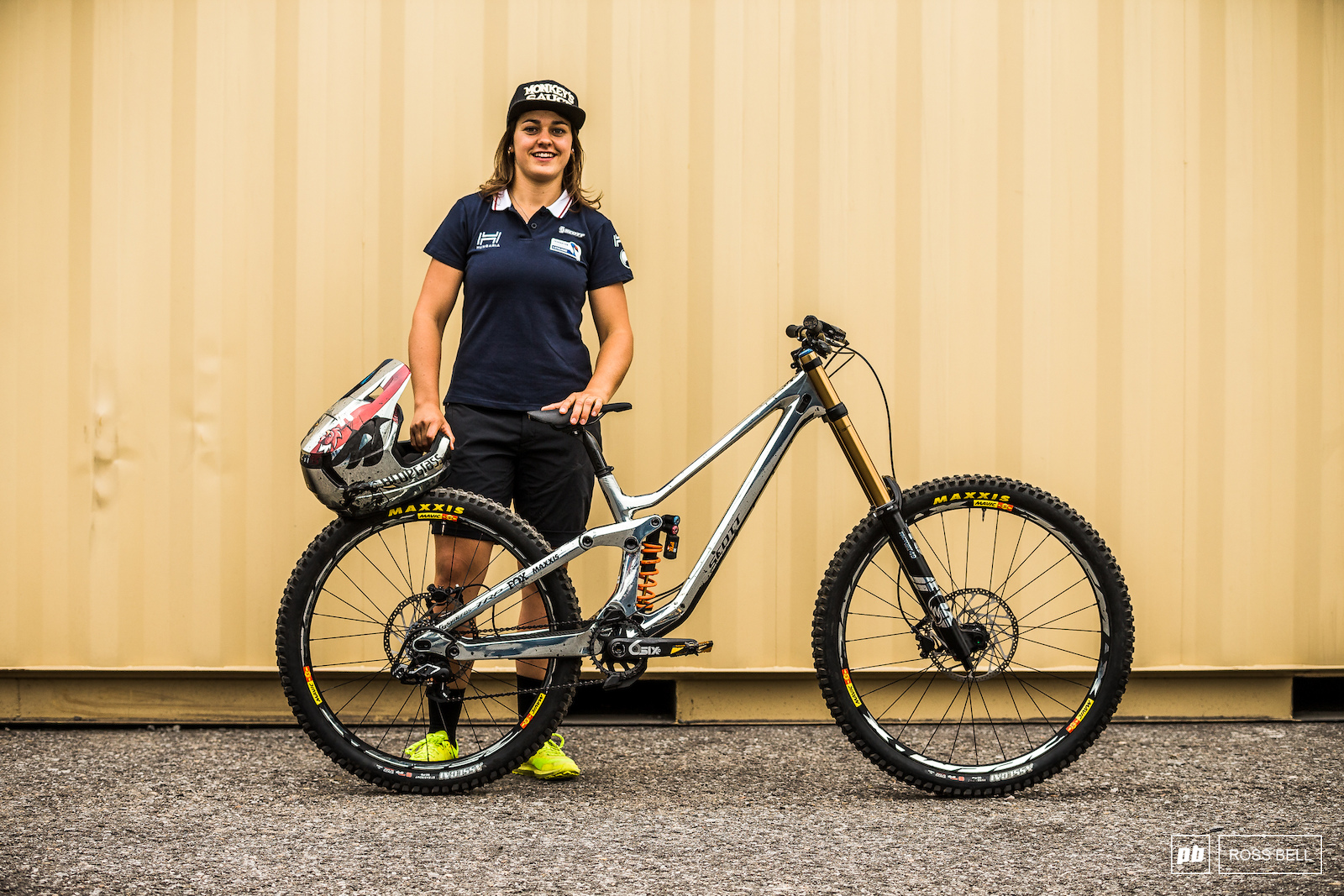 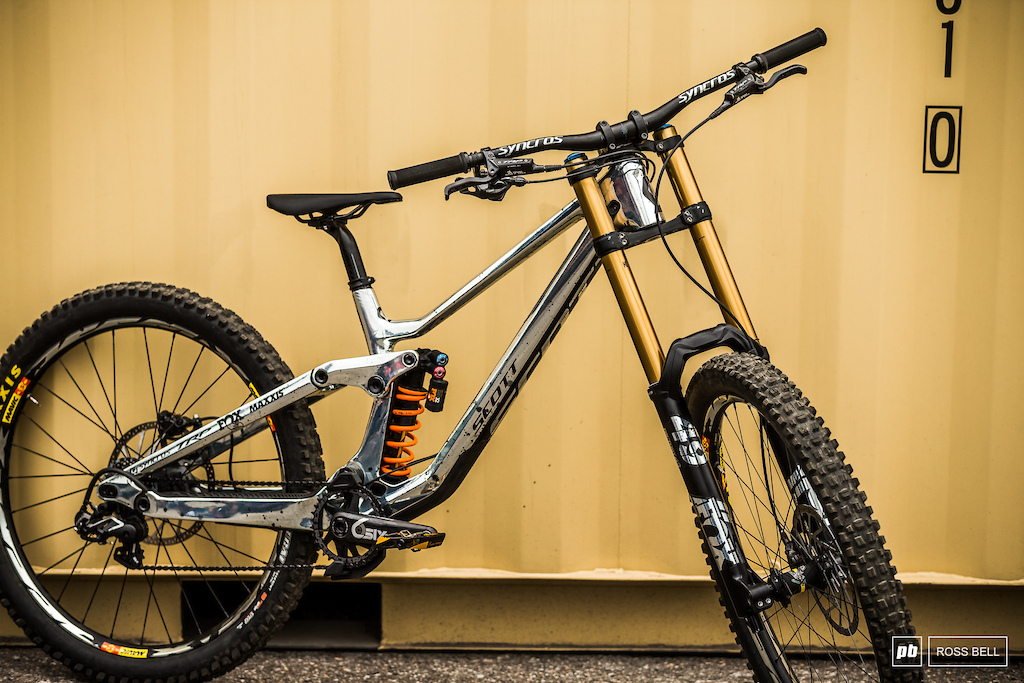 Frame: Scott Gambler
Shock: Fox DHX2
Fork: Fox 49
Wheels: Mavic
Tires: Maxxis Assegai, 1.6 bar rear, 1.5 front
Inserts: Rear only
Drivetrain: TRP/RaceFace
Brakes: TRP
Cockpit: Syncros bar and stem, 770mm wide bars
Size: Medium
With a new bike and team for the season, it seems as if hasn't taken all that long for Marine to get adjusted to the fit. She's been working with her mechanic, Fred Brunel, since winter to get her set up dialed in. After about three months, everything was ready to start the season. After running the 29" wheeled set up, Caribou has decided to go with a mixed wheel size as it's a more comfortable fit for her.

The frame has some adjustability built into it with four different positions the rear can be set in and she's running it in a middle position. She's also running her chainstays in the shorter position. 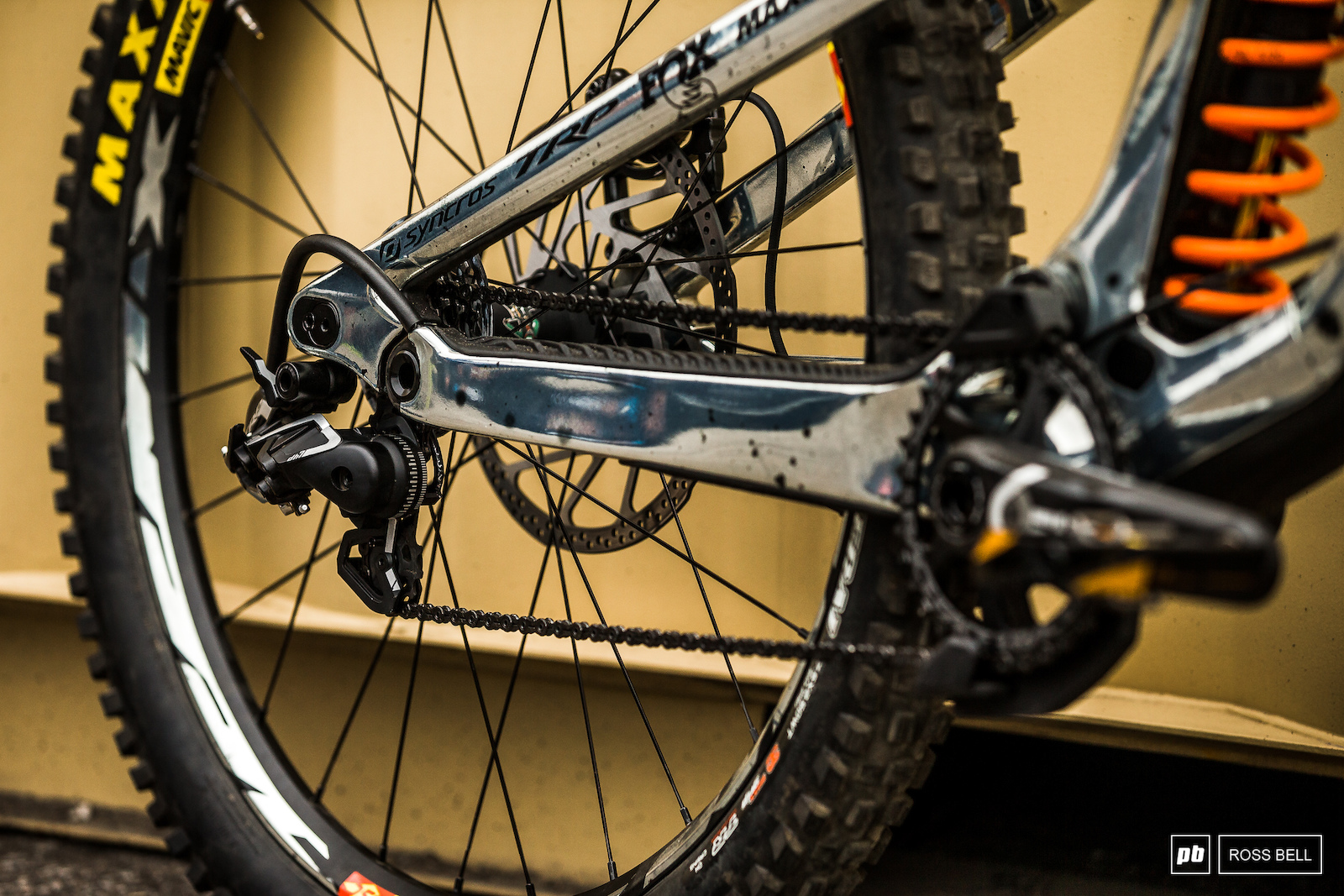 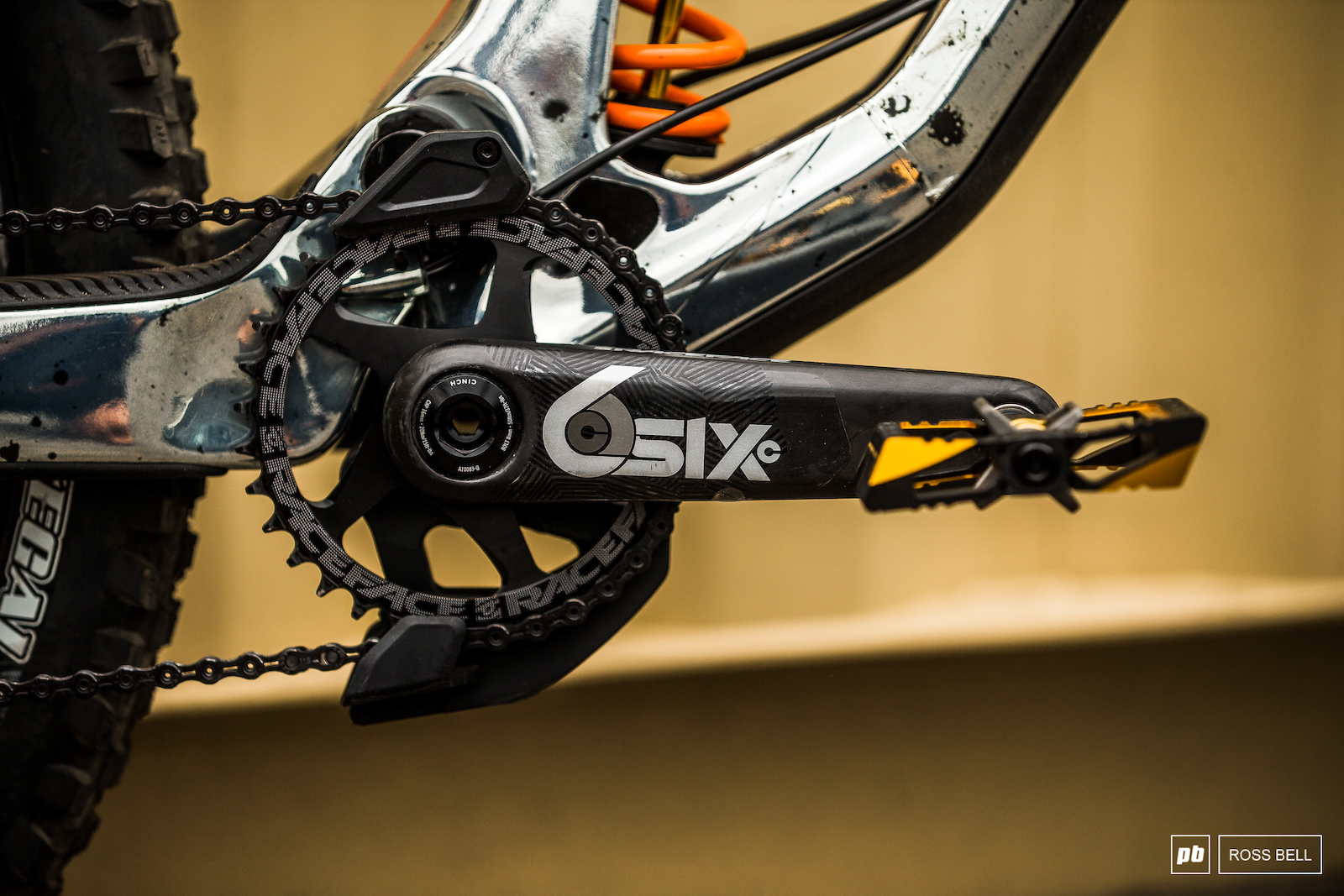 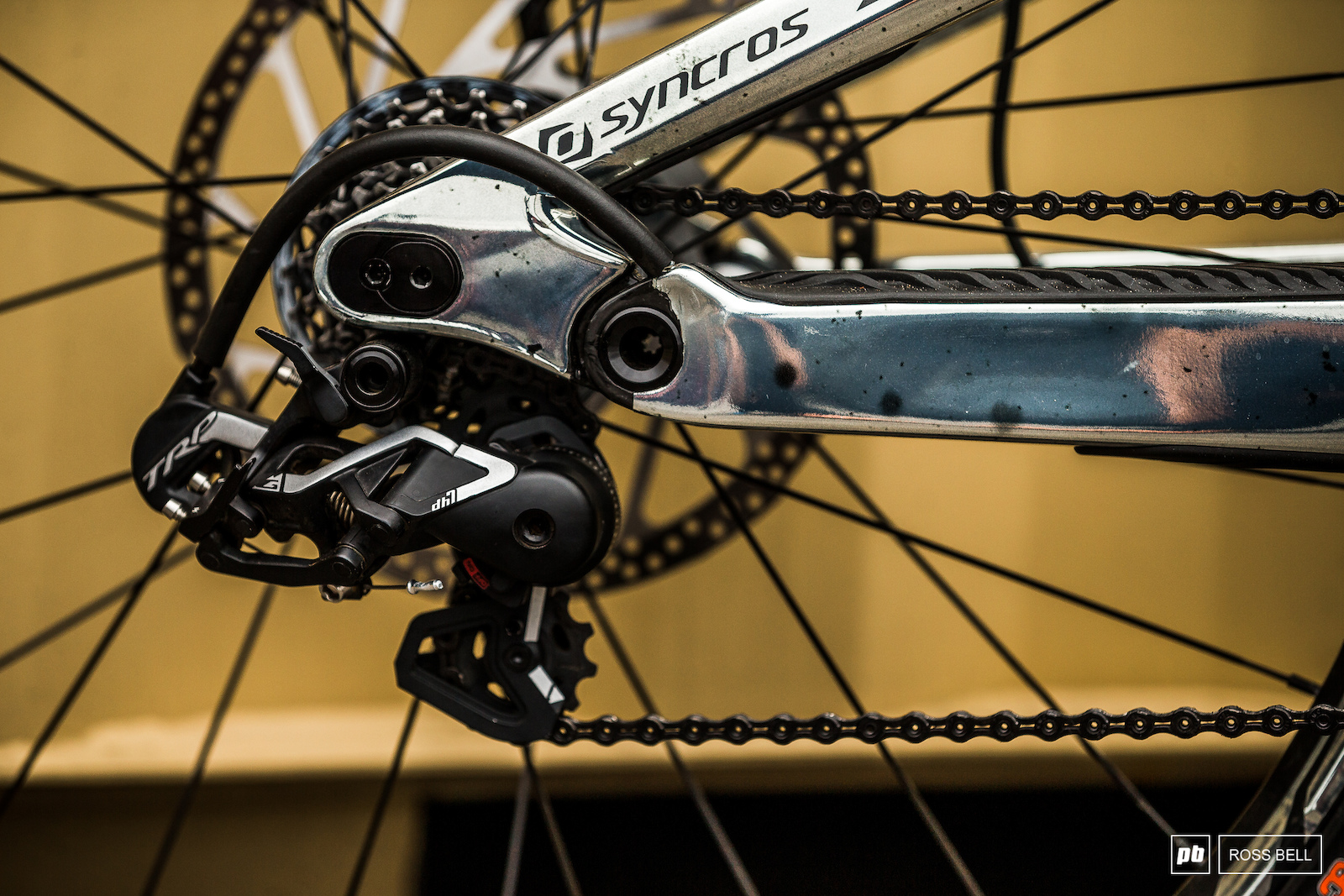 A TRP drivetrain manages the shifts while RaceFace cranks make the wheels go 'round. 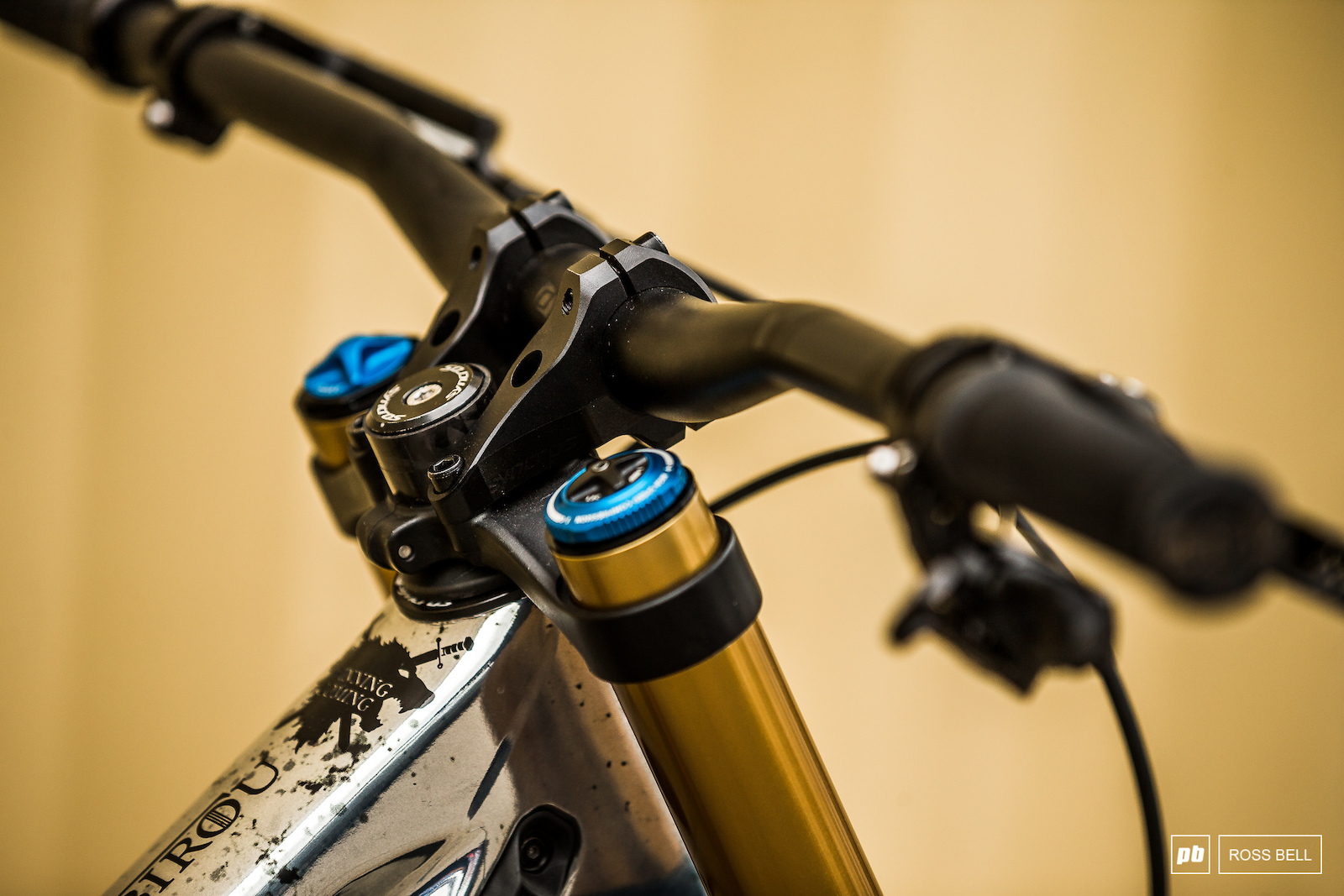 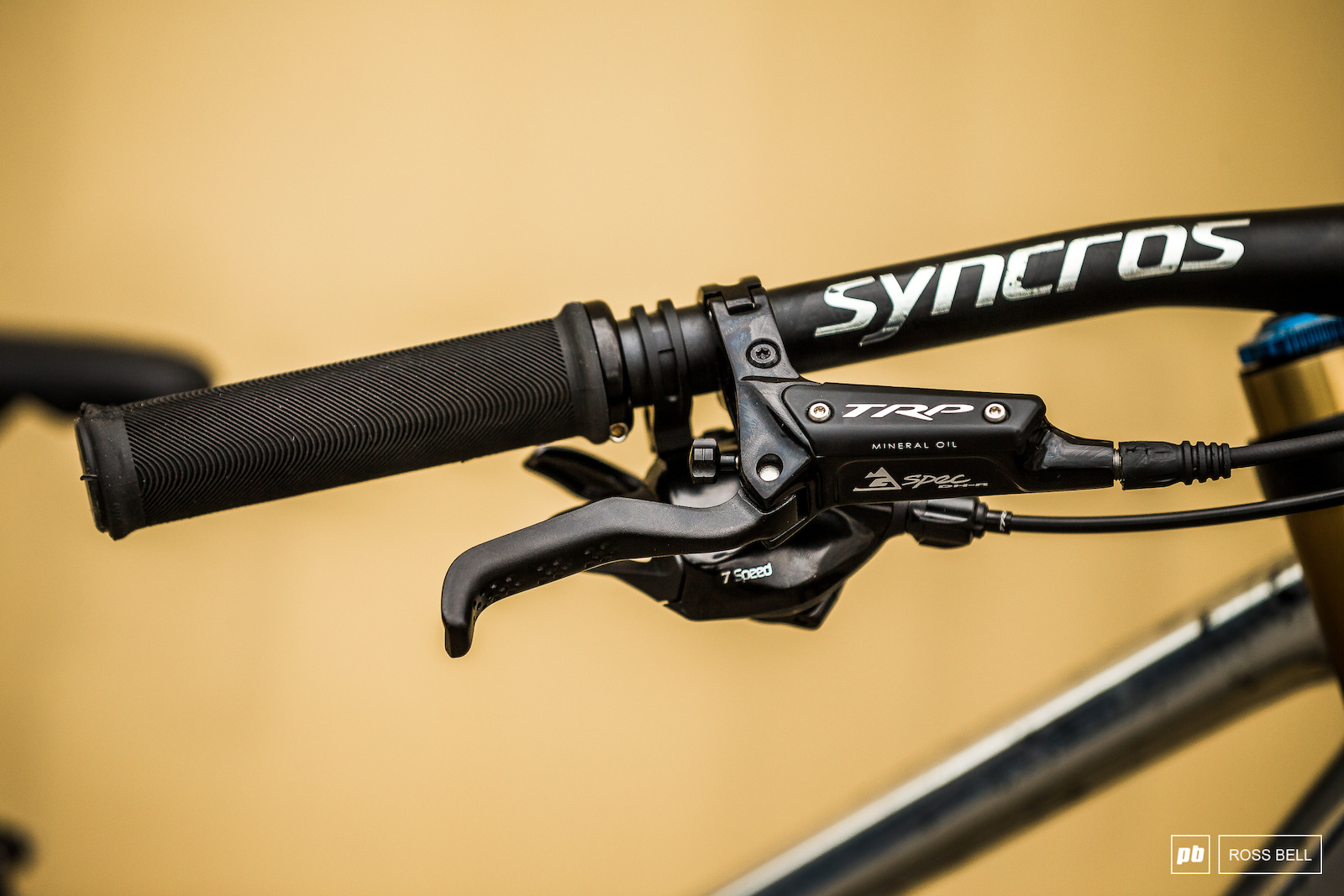 The cockpit is set to be as low as possible with no spacers under the stem. Her bars are at 770mm. The set up she started with this week is about the same as what she's going to race with. There are five tokens in the fork and 70psi, with 11 clicks of LSC, and 13 of HSC. There are 5 clicks of LSR, and 6 of HSR. 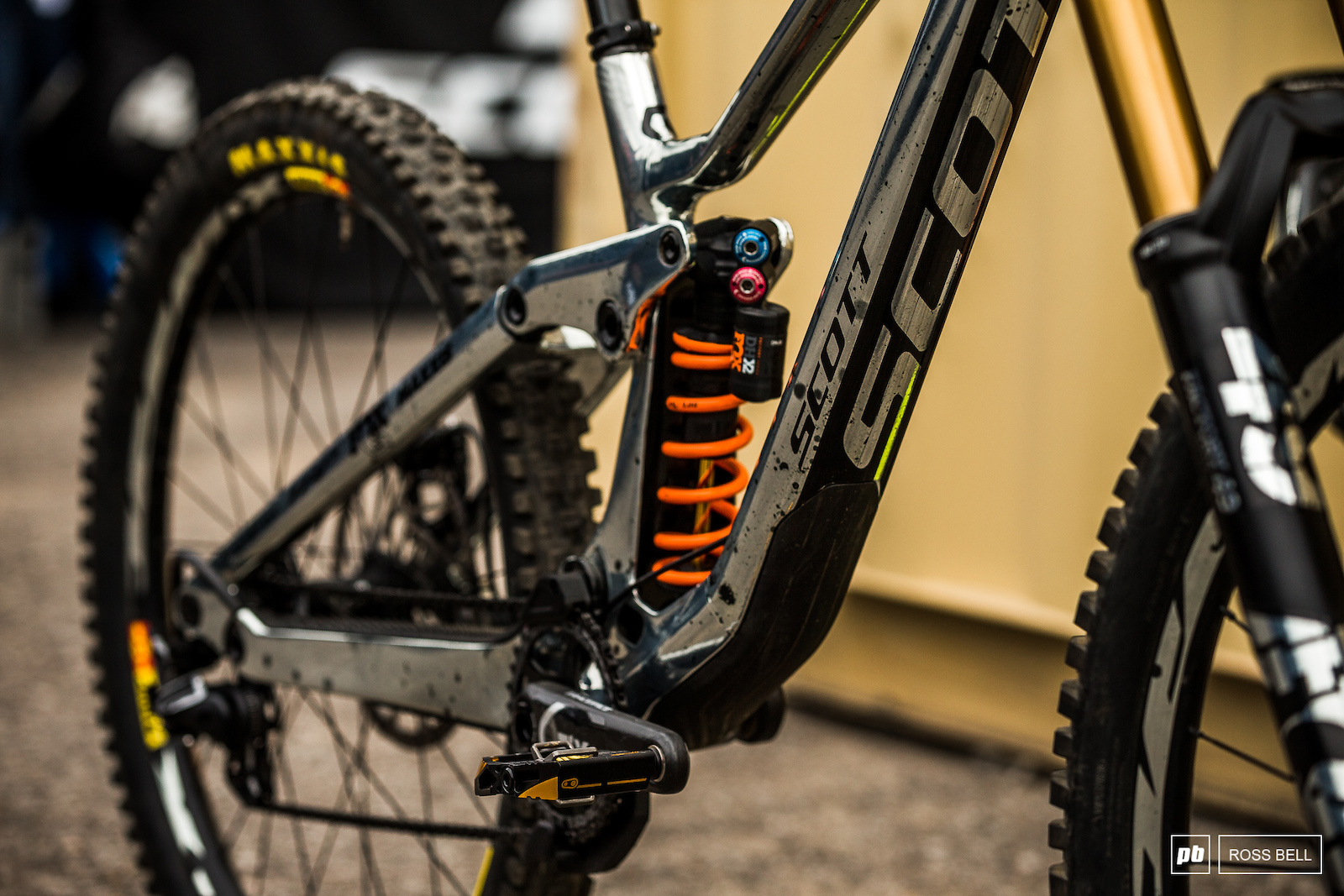 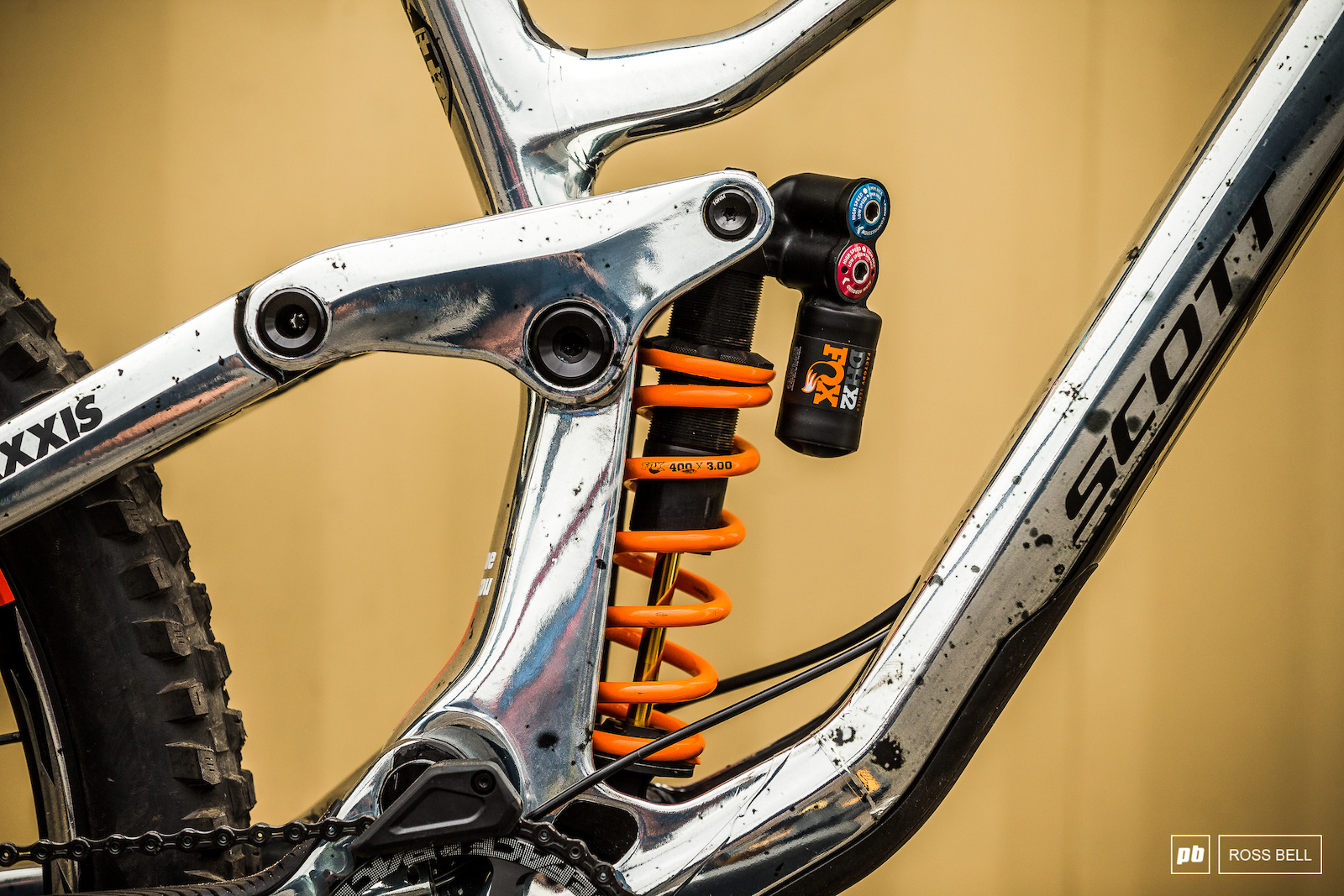 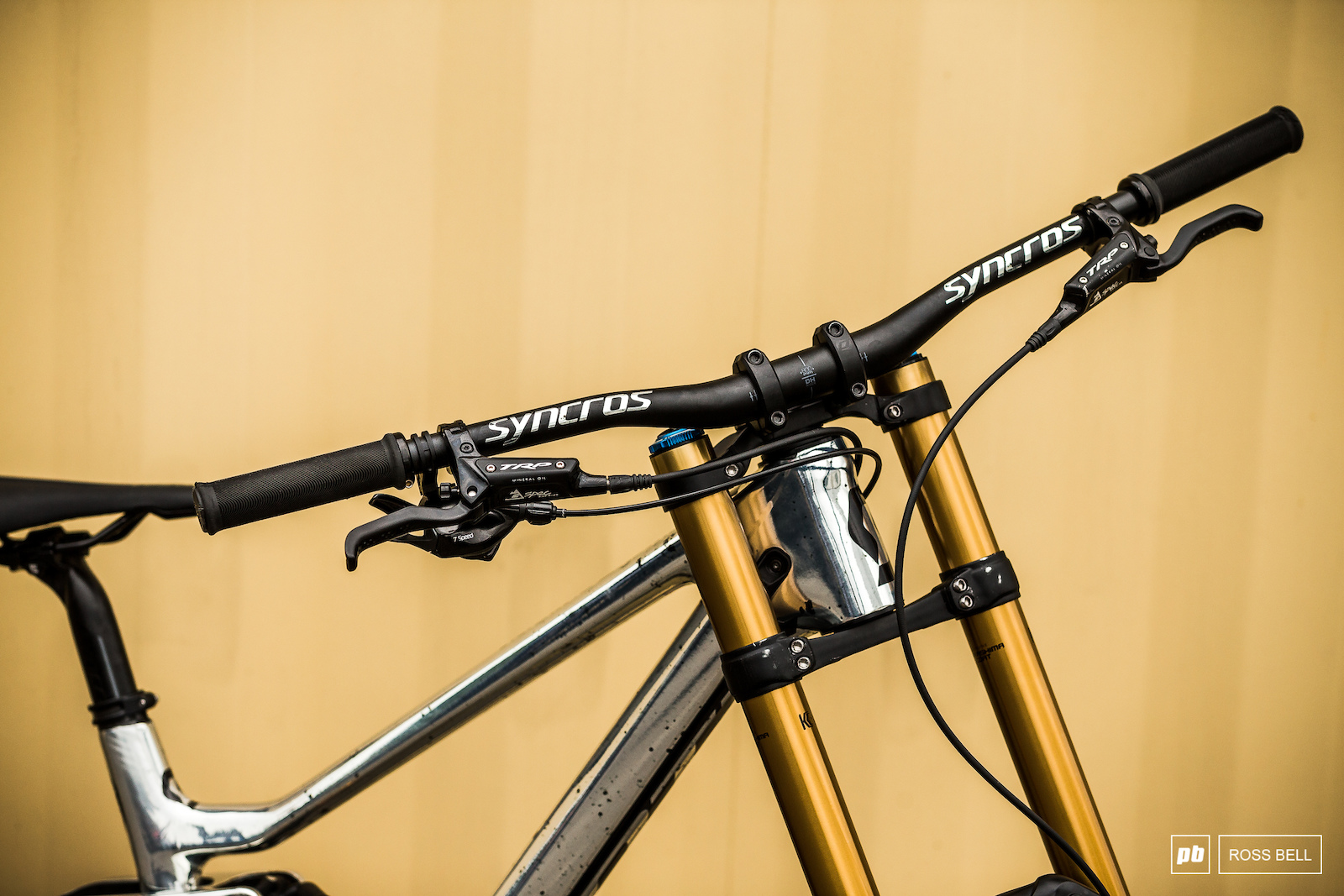 There is a 400lb spring on the shock and her compression has been varying race to race. Here, she has a fairly open compression and rebound tune. Marine is very particular about her rear shock set up. There are a few other touches that were eluded to as far as special setup in the fork and wheels is concerned but no more information on that was given out. Trade secrets. 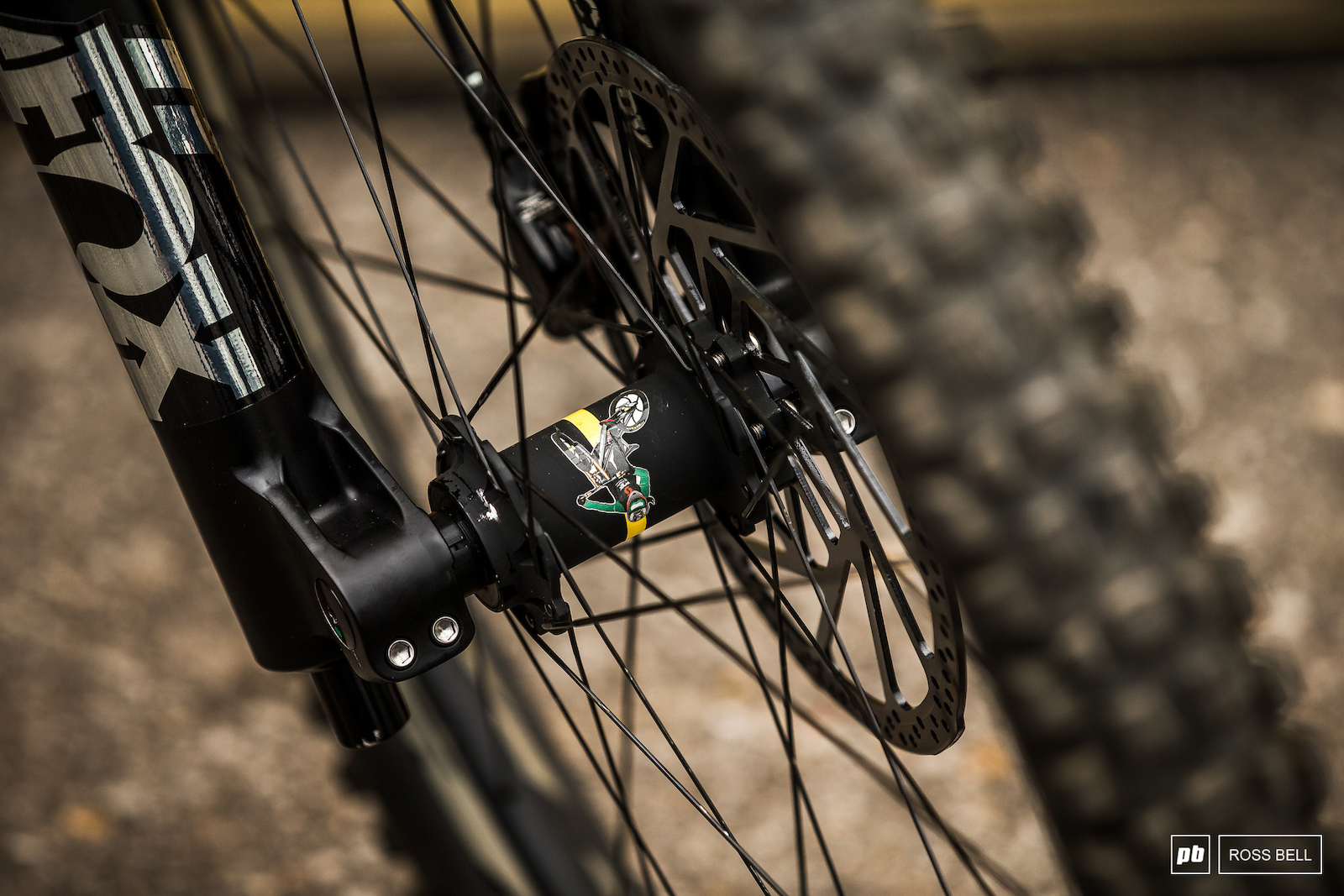 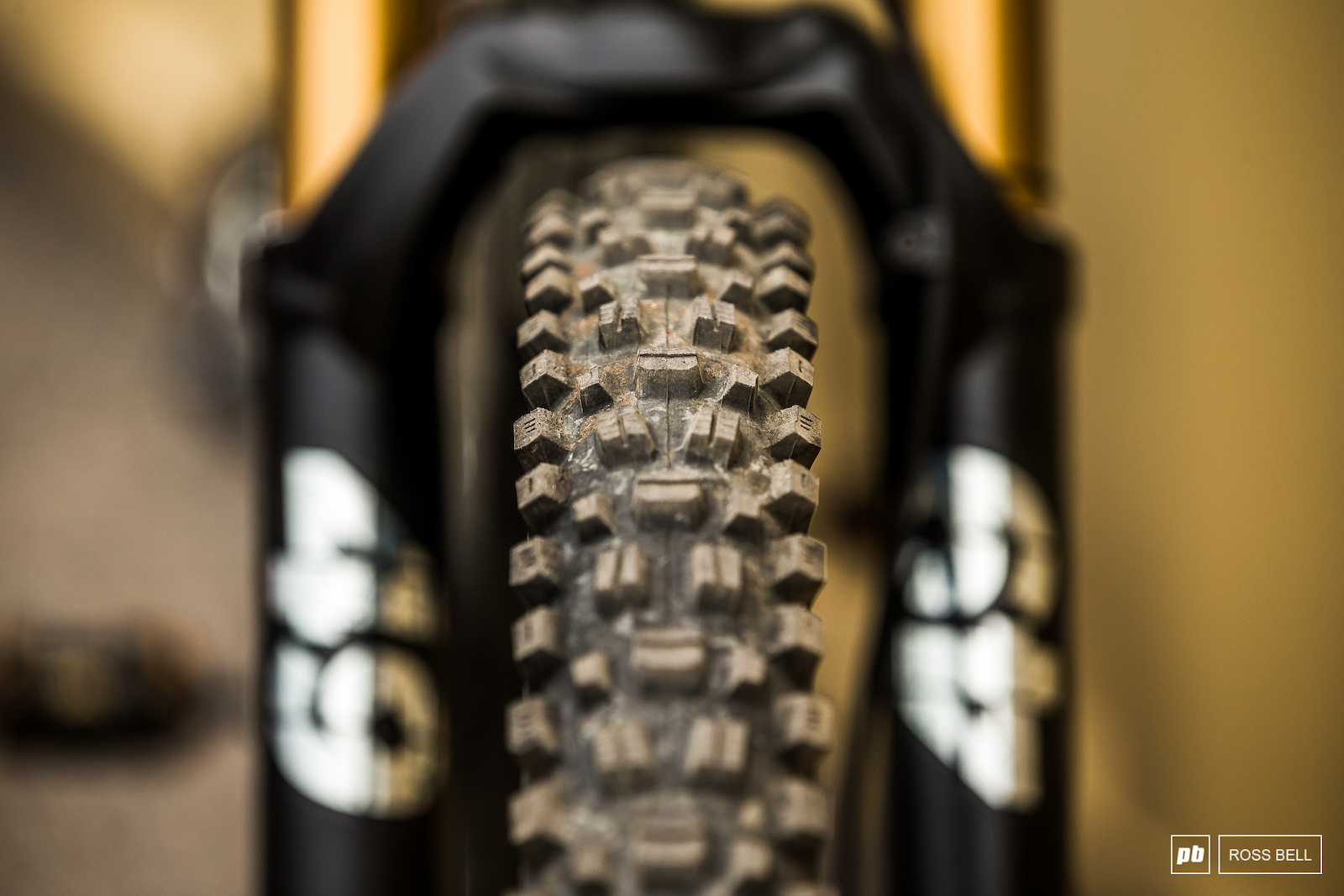 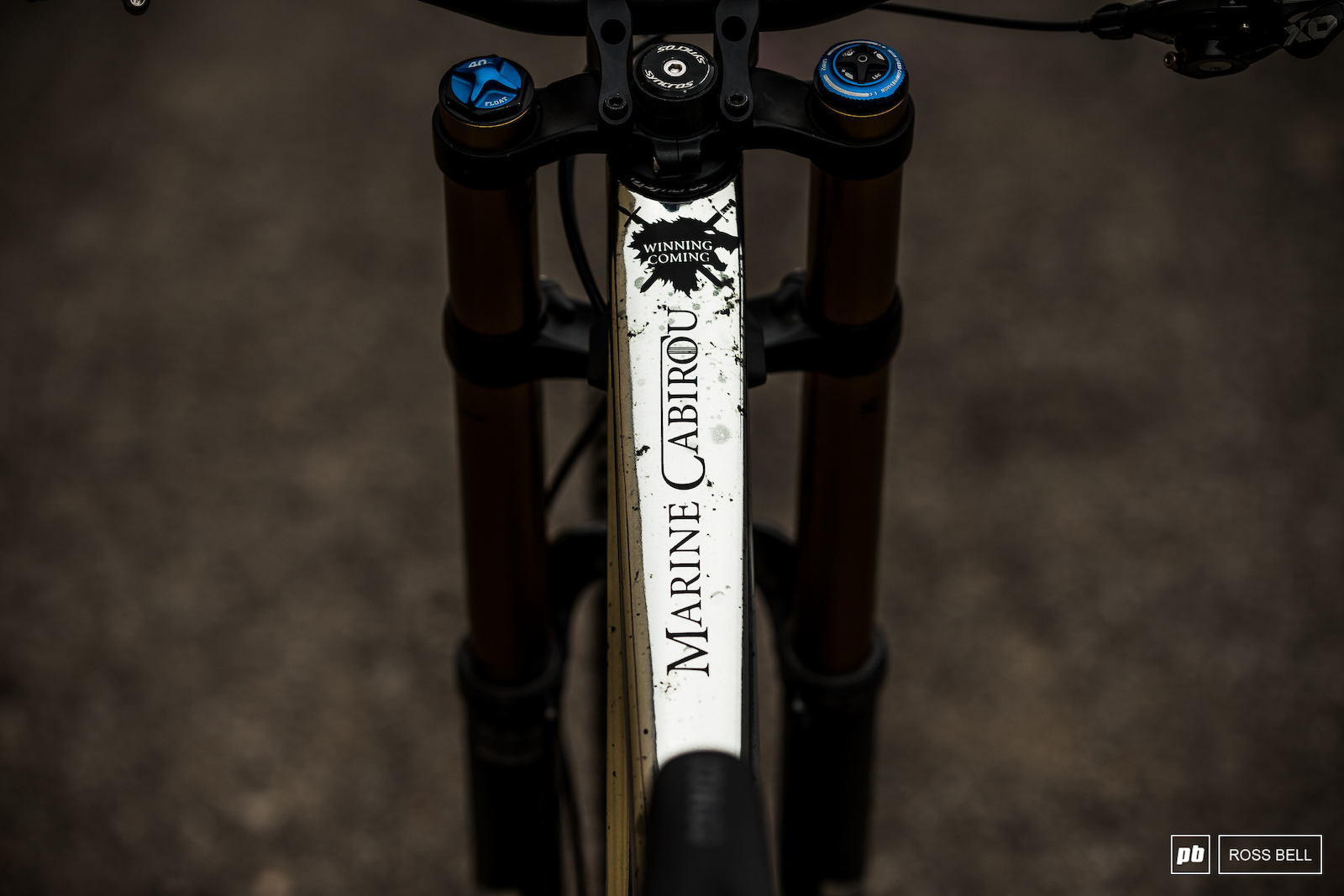 74tenomresc (Aug 30, 2019 at 10:47)
looks pretty trick too. Gwin helped develop it and has been running it for some time now. Got to feel one in the flesh, the shifter action feels pretty ace

satansdog (Aug 30, 2019 at 11:59) (Below Threshold)
@74tenomresc: im sure that’s why none of the scott riders are actually using it when riding, as soon as they are done with the pictures they replace it with sram X01 dh haha

suspended-flesh (Aug 30, 2019 at 12:53)
Can we please get one last #MarineCaribou misspelling for old time's sake? Those were the days, my friends, when migratory sea-mammals herded on PB.

Sshredder (Aug 30, 2019 at 10:25)
No Sram or Shimano to be seen . Cool that there are real options other than the two big S companies. Bike looks beautiful !

freestyIAM (Aug 30, 2019 at 10:30)
whats with the little lever near the derailleur hanger on that TRP dh7 derailleur?

johntaylorphotos (Aug 30, 2019 at 12:50)
Most folks (not all obviously) love chrome polished aluminum look so why don’t bike manufacturers offer it more often?

DH-Angel (Aug 30, 2019 at 11:36)
I would like to see a comparison of a Trek Session vs Scott Gambler in handling ground/air and frame strength.