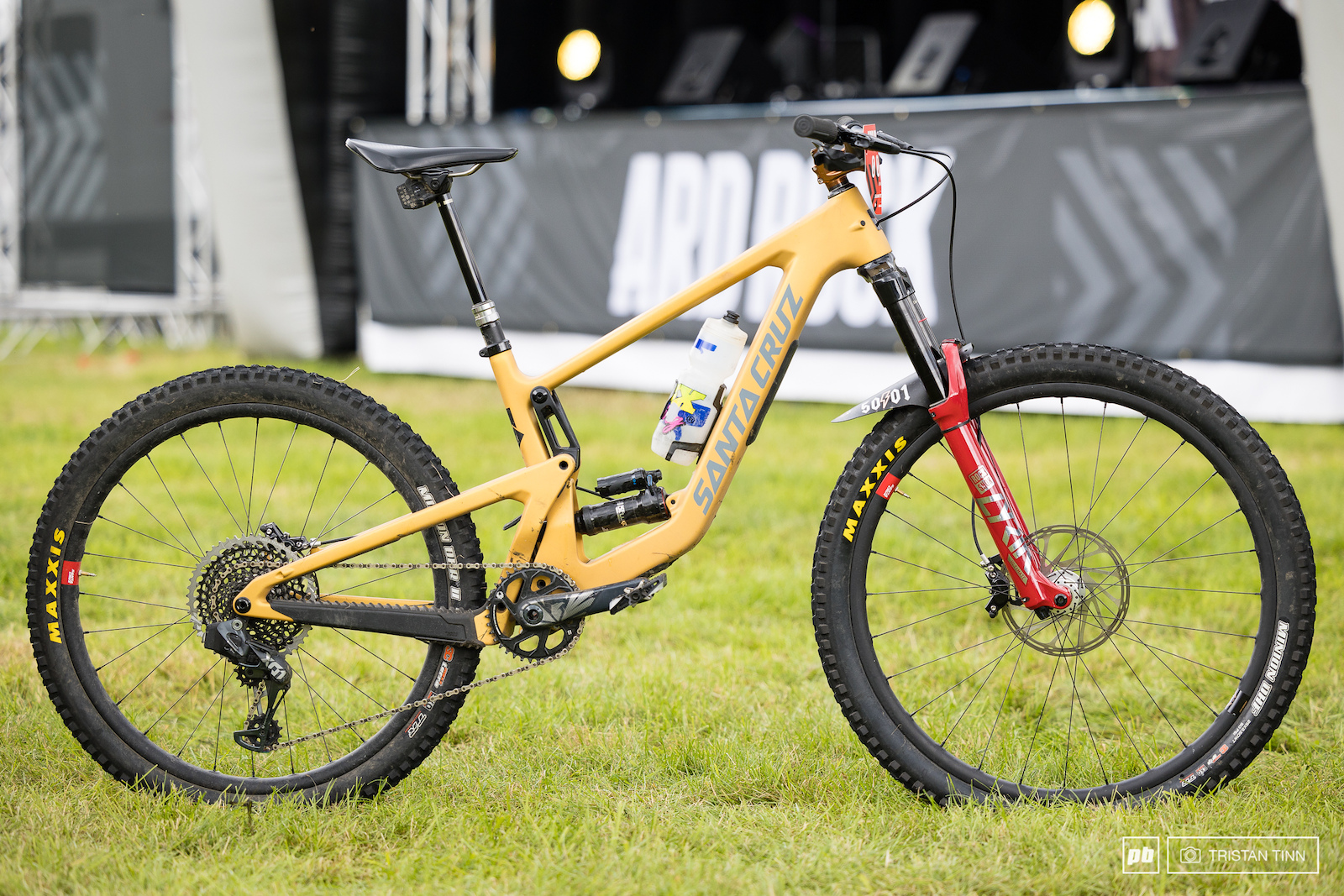 BIKE CHECK
Mark Scott's
Santa Cruz Bronson
Photography by Tristan Tinn
Mark Scott is one of Santa Cruz Bikes' elite enduro athletes and probably needs little introduction. He hails from the Tweed Valley in Scotland, home to some of the UK's finest trails. Mark's origins were downhill racing but he is now well embedded in the EWS ranks. He also stretches his legs further and has competed in longer distance events such as XC and the odd epic.

At Ard Rock, Mark Scott's Bronson is built up with RockShox suspension and SRAM Eagle AXS shiny parts. He's rolling on Reserve wheels with a classic DHF and DHR II combo, though they're EXO casing because that's all he could get right now, and without inserts, he's playing with fire on the rocky terrain.

Let's take a closer look at his Bronson. 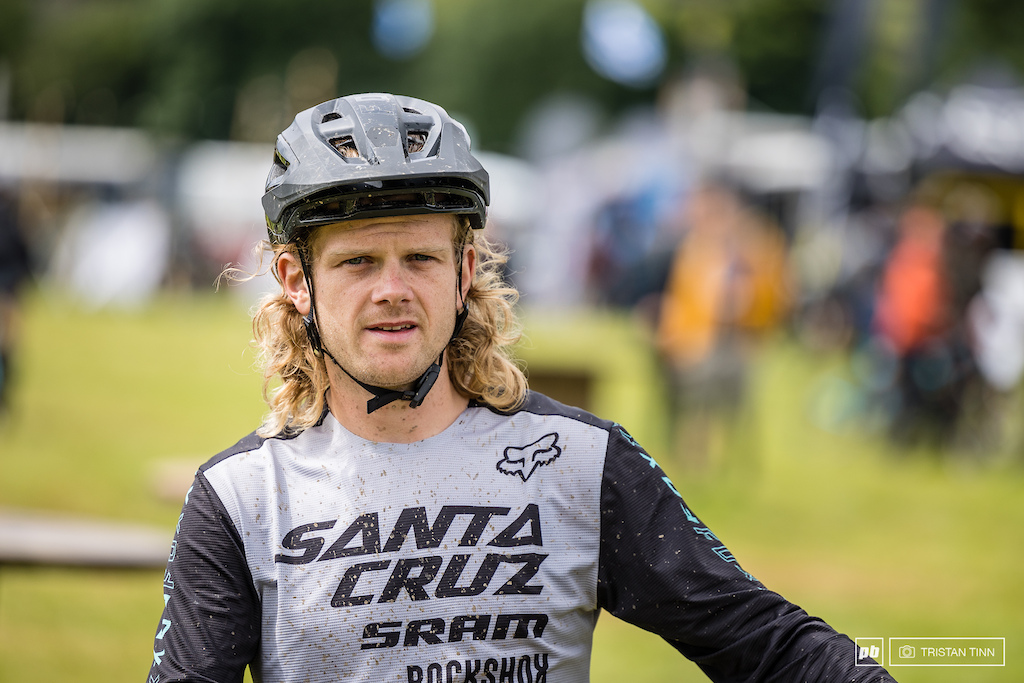 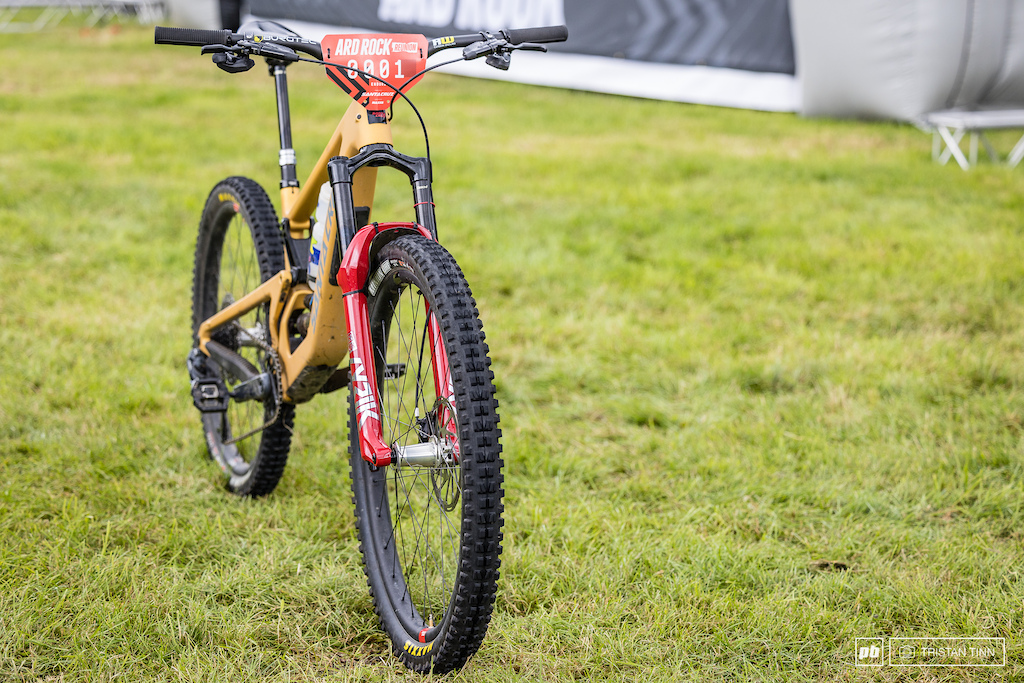 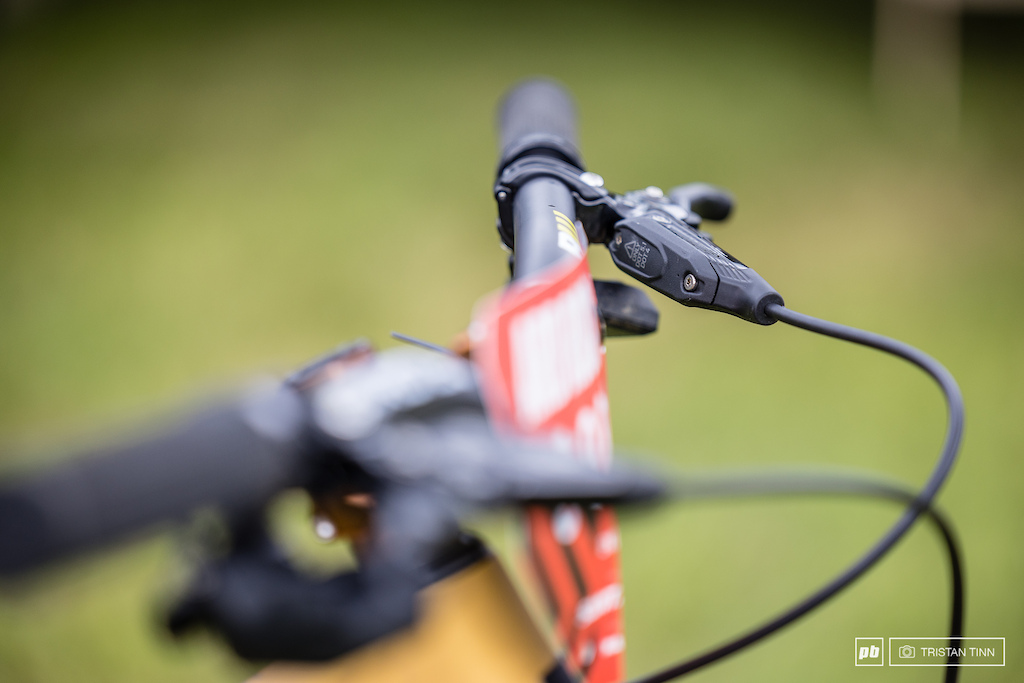 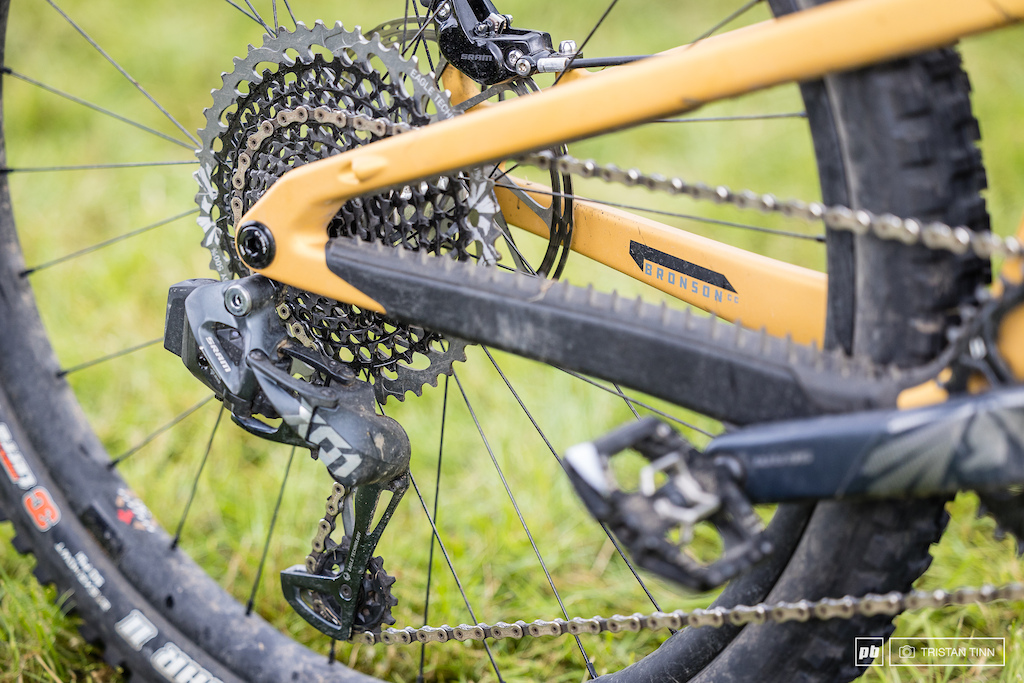 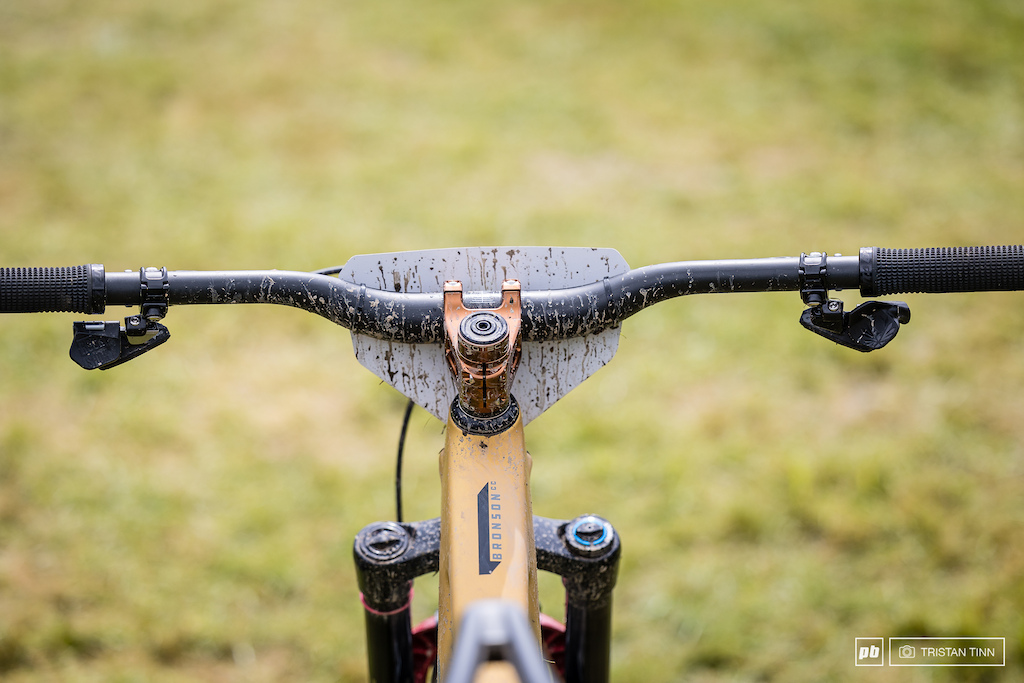 AXS on the drive. Notice Mark also runs his levers quite flat 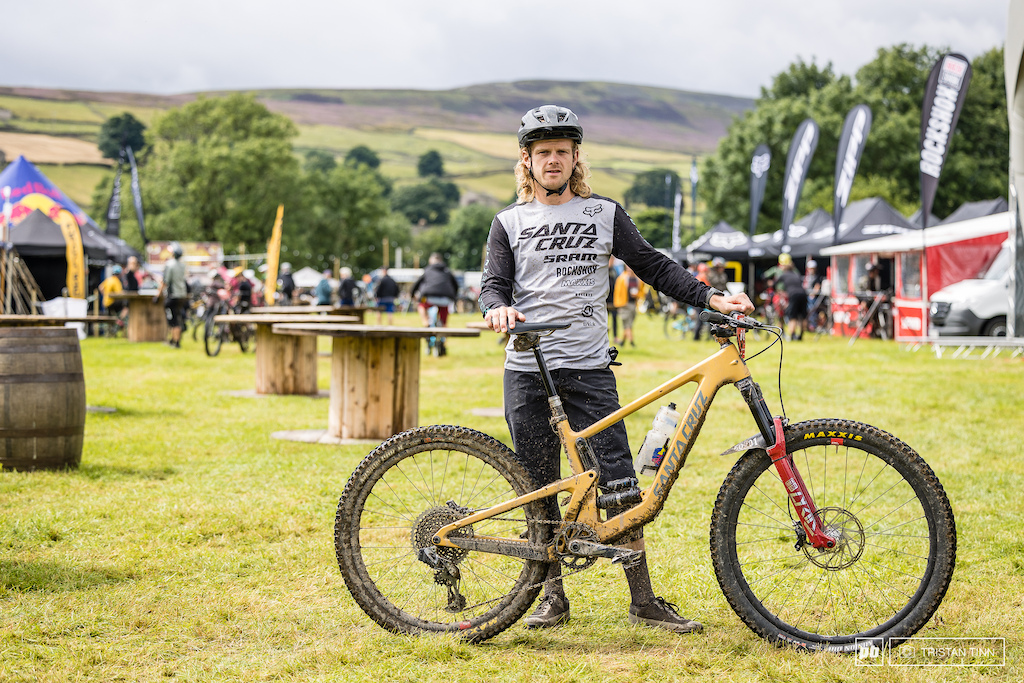 melonhead1145 (Aug 7, 2021 at 4:08)
These latest bike checks are rubbish, I'm sorry. Wheels: reserve, which reserve wheels, what hubs? Cockpit: burgtec? What stem, what length, which bars, how wide? No tyre pressure either

lkubica (Aug 7, 2021 at 4:41)
It's just a SC commercial, as boring as SC bikes themselves so it's not surprising that PB stuff did not achieve the peak of journalism here. There are things you just have to fo and want to get over them as fast as you can. Would you be excited to do a bike check of another SC bike with stock suspension, wheels and drivetrain?

nots1 (Aug 7, 2021 at 5:30)
Agreed. The solution would be a simple print out spreadsheet with all measurements/info to filled out which is distributed amongst all "bike checkers".


Standardize this you are done

Same with detailed specs on bike checks at the moment.

mrtoodles (Aug 7, 2021 at 14:44)
Pro bike checks are usually crap anyway unless they include personal touches and settings. Oh whats that? They choose to run the parts they're sponsored to run? No waaaay... get outta here.

Balgaroth (Aug 8, 2021 at 3:01)
@mrtoodles: no idea why you get down voted since that's the truth. Very rarely you will see sponsored athletes run say a Maxxis tire blacked out and in any case this will never covered in a bike check.

How has the editing/write up quality gotten worse since you got bought out? It's like every article.

friendlyfoe (Aug 8, 2021 at 8:57)
Outdoor probably decided they had 30% too much staff and fired a bunch of people. Oh and they'd like the remaining staff to increase overall output by 15% as well.

CustardCountry (Aug 7, 2021 at 11:44)
Today’s bike check:
“I’m sponsored by Santa Cruz and SRAM and everything on my bike is by them because that’s what I have to have. PS it’s the best, honest “

I much prefer privateer bike checks where they’ve slaved over their choices pick what they want and to Min/Max their build.

salespunk (Aug 7, 2021 at 6:52)
Sorry, but as a professional racer I would not be trusting my results to Exo casings. I know he would have to spend money out of his own pocket, but tires ARE AVAILABLE retail. A simple Google search will find whatever you need, just have to be willing to pay for it right now.

MT36 (Aug 10, 2021 at 14:43)
So much negativity with the bike check. It seems the components and setup are pretty self explanatory from the pics? Looks like a sick bike and it's interesting to see people riding a Bronson at this level... these days it seems like mostly just 29ers at these events.

cec0 (Aug 7, 2021 at 4:39)
That front tire with DHF thread and Minion DHF written on the side of surely falls under "Tires: Maxxis Minion DHR II EXO"

oldnw (Aug 7, 2021 at 16:01)
These bike checks are a waste of space. Just show a pic from the Santa Cruz website! How about frame size( I guess it looks like medium) tire size, bar width/ height, dropper length, saddle, any little special setup tricks he uses.

It even says it on the side of the fork.

jaimeparra (Aug 8, 2021 at 6:58)
Isn´t a contradiction to say you only got EXO tires but usually use DH casing and then saying you´re not using tire inserts? I would use tire inserts if having only EXO casing... or not?

Mugen (Aug 7, 2021 at 4:20)
What pressure is he running in those exos? I'm not half as fast and have punctured all my exos within a handful of rides

Balgaroth (Aug 7, 2021 at 14:07)
Simply put air into them and all your problems will be gone ! I was a firm beliver in the DH casing for enduro hype (easy since I come from the DH world) and this summer I put a DHF exo on the front since it was all that was left in my garage. So far it did 10 days of Park riding (flow and natural) in the Alps with no problem. But I riding them at 1.8bars, no grip problem if you load it properly and I am 85kg, "fast" rider.

andrewfrauenglass (Aug 7, 2021 at 7:06)
I took a closer look and noticed that the little plastic front fender only keeps the fork bridge clean.

Philt32 (Aug 8, 2021 at 1:14)
NOTICE “he runs his levers quite flat”….it’s all in the detail….some people should read the article instead of skimming through it