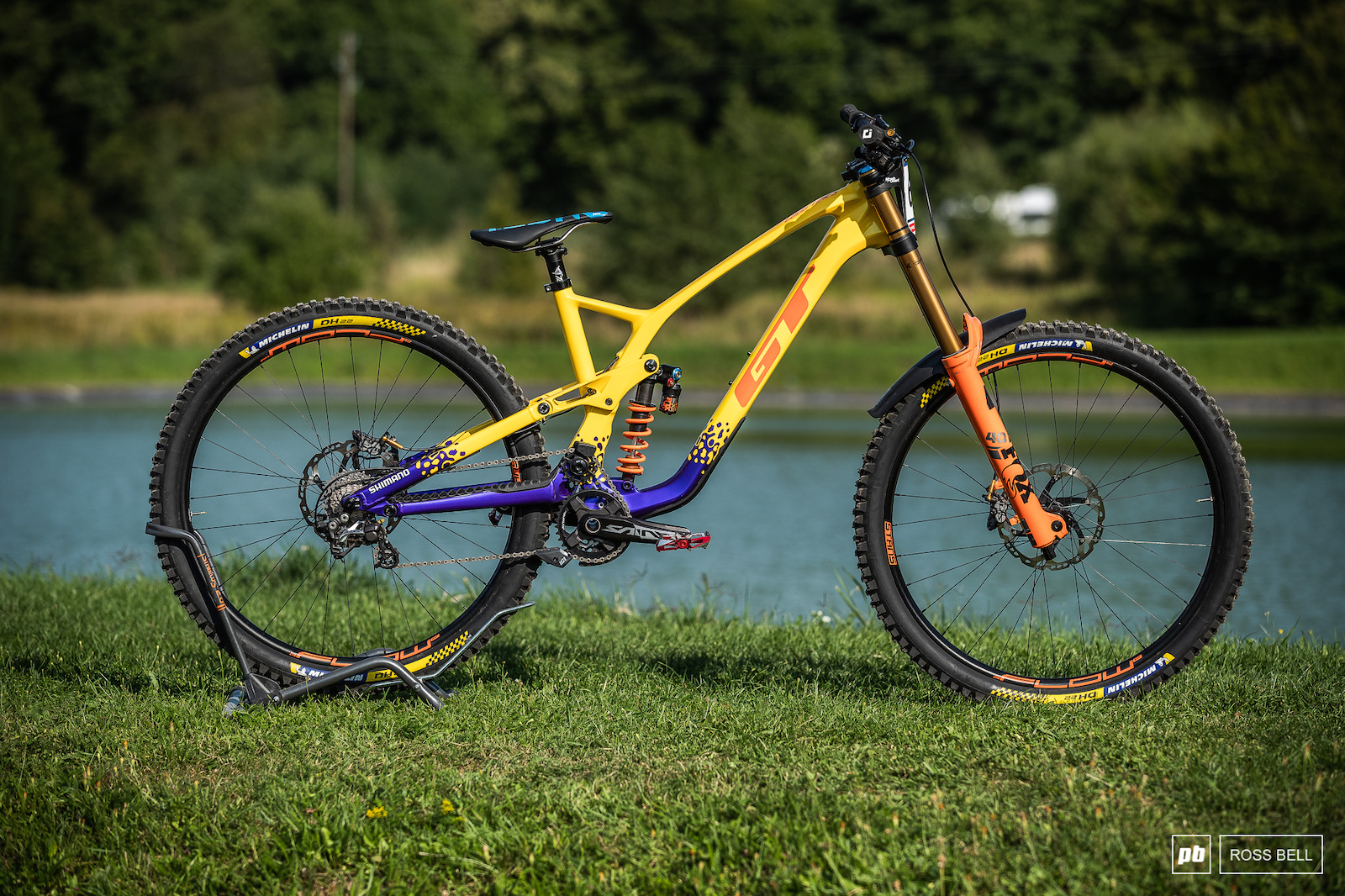 BIKE CHECK
Martin Maes'
GT Force
Photography by Ross Bell
Martin Maes has had one hell of a season so far. He became a father right at the start of the EWS season and returned to racing for EWS round three, where he was sitting in third until a crash in the final stage took him out of round four due to concussion symptoms. Now, he's back to racing on a new bike for the Maribor World Cup, where he's sitting 37th in the UCI Elite DH rankings, thanks to a 9th place result at the first Maribor World Cup last year and two 13th place finishes at the back-to-back Lousa events.

Martin's new bike is a Force that's tweaked to a downhill setup, which suits him, his coach Steve Spencer said, because he prefers a bit shorter travel than most on both his downhill and enduro bikes. While the Force comes stock with a 170mm fork for enduro mode, Martin prefers to run it at 160mm to keep the bike nimble. "He can choose very good lines," Spencer said. Similarly, instead of a 200mm fork, he's running 190mm up front to prioritize maneuverability over a monster truck feel. 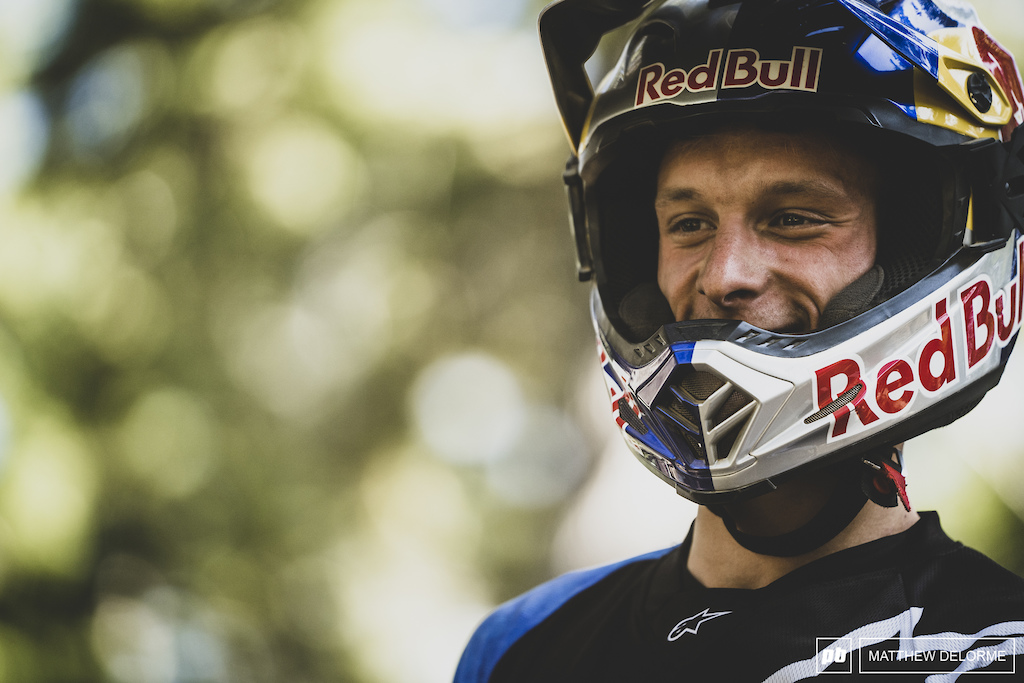 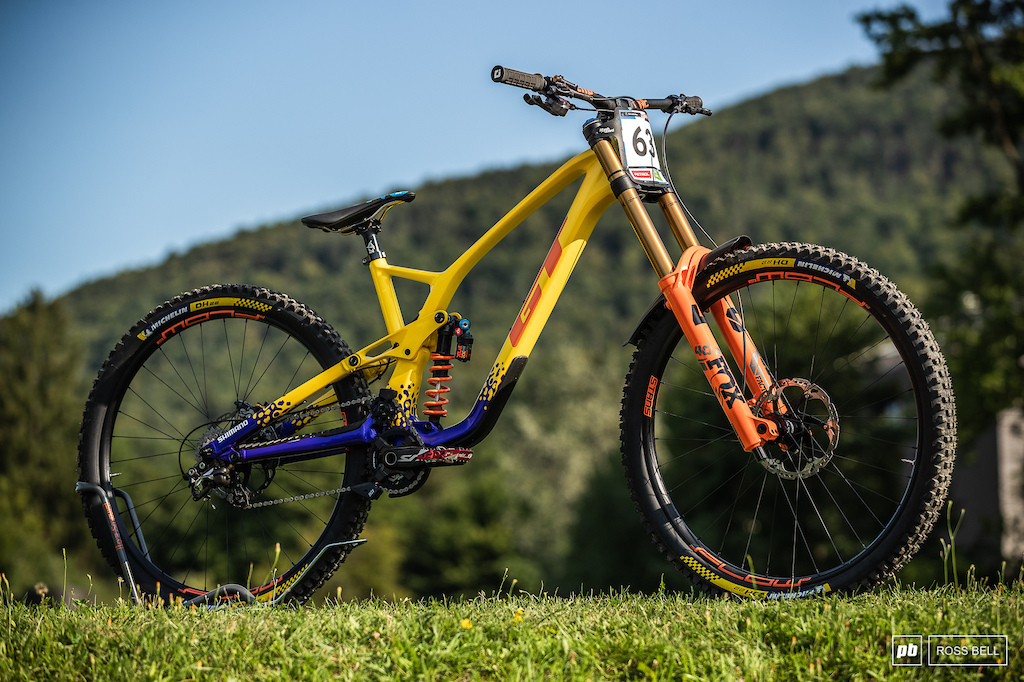 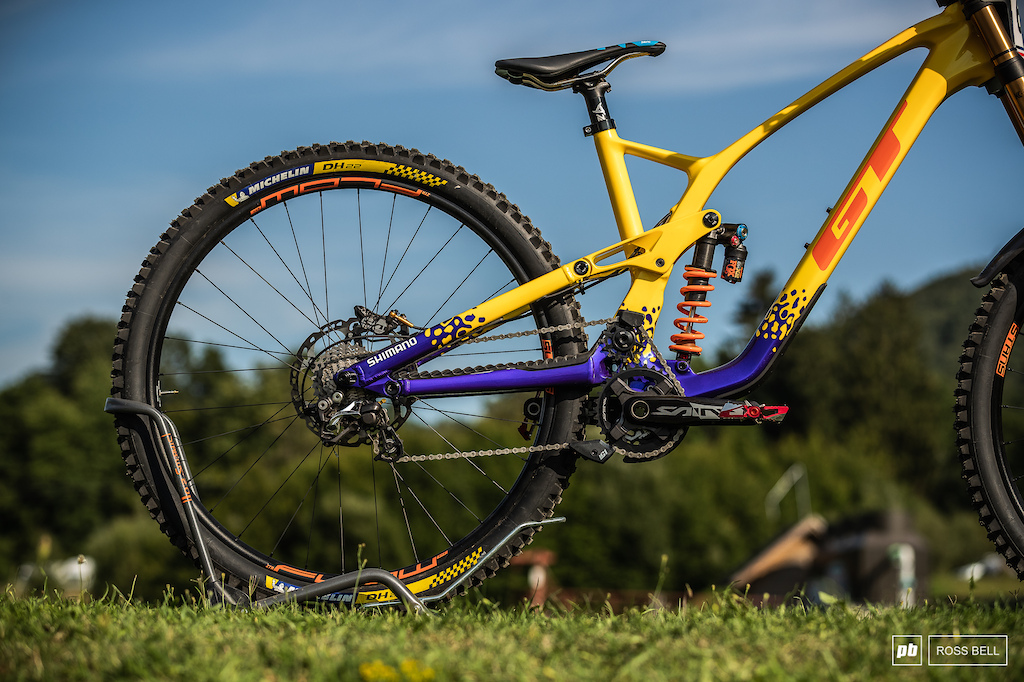 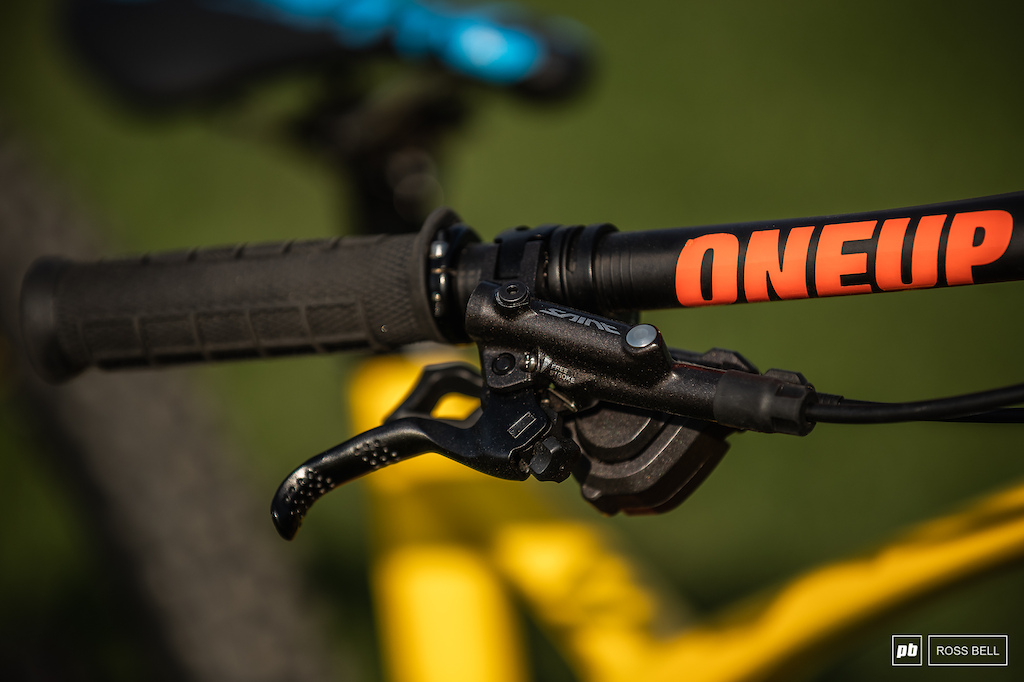 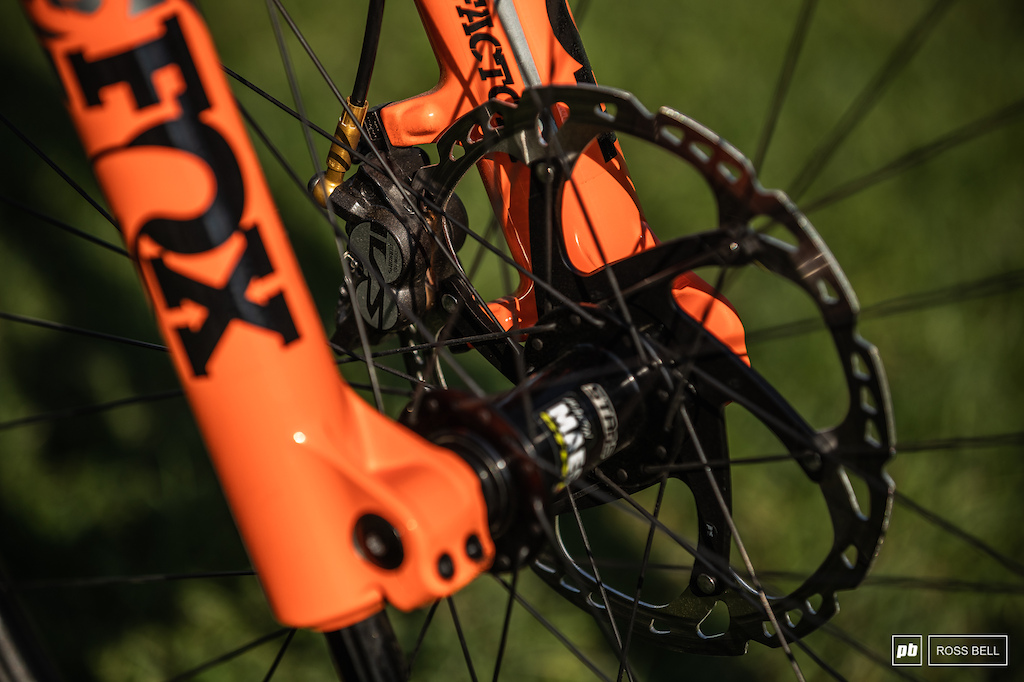 Martin likes to keep his setup relatively consistent and runs the same brakes whether he's racing enduro or downhill, but he did switch to 200mm rotors front and rear for this race rather than his usual 180mm. 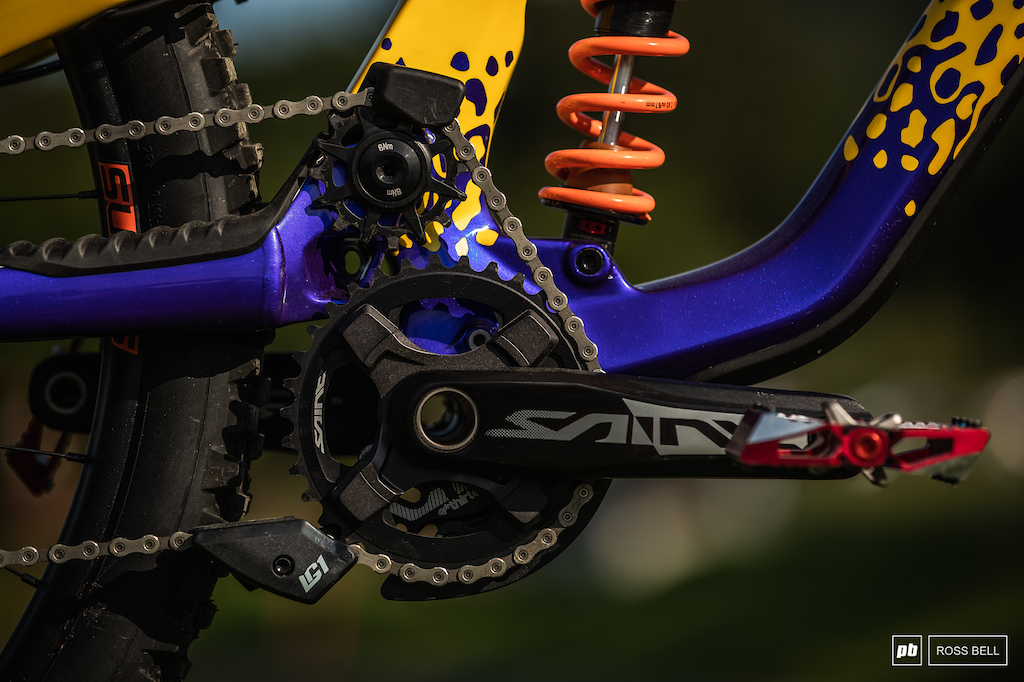 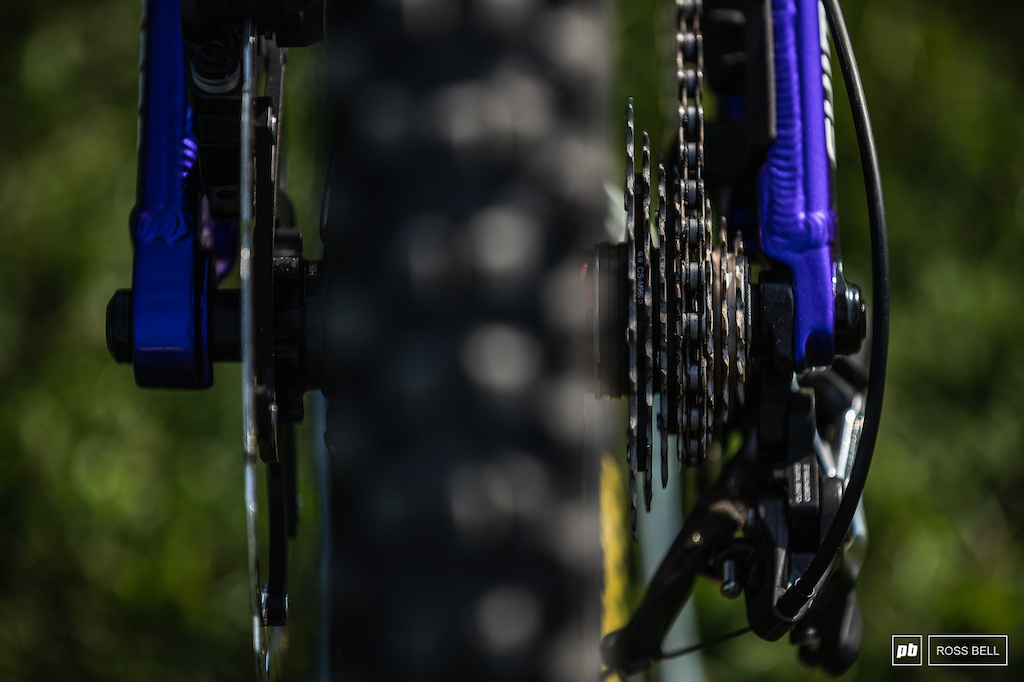 It's powered by a Saint 7-speed setup, with the recent addition of an idler wheel of course. 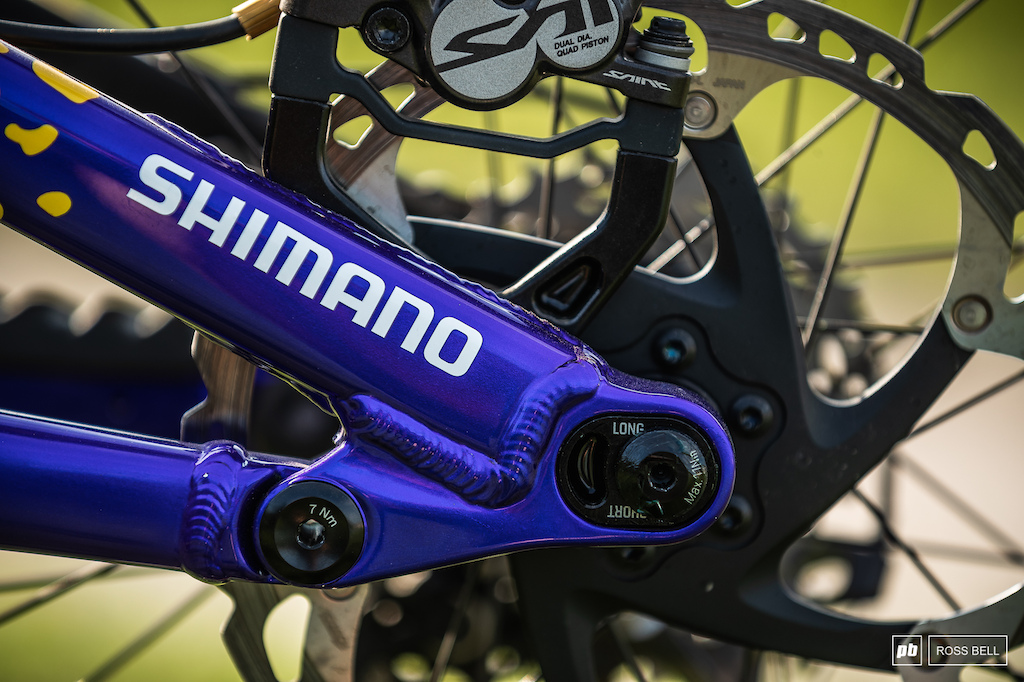 GT's chainstay adjustment lengthens or shortens the rear end by +/- 10mm. Martin has opted for the longer setting, putting the chainstays at 445mm. 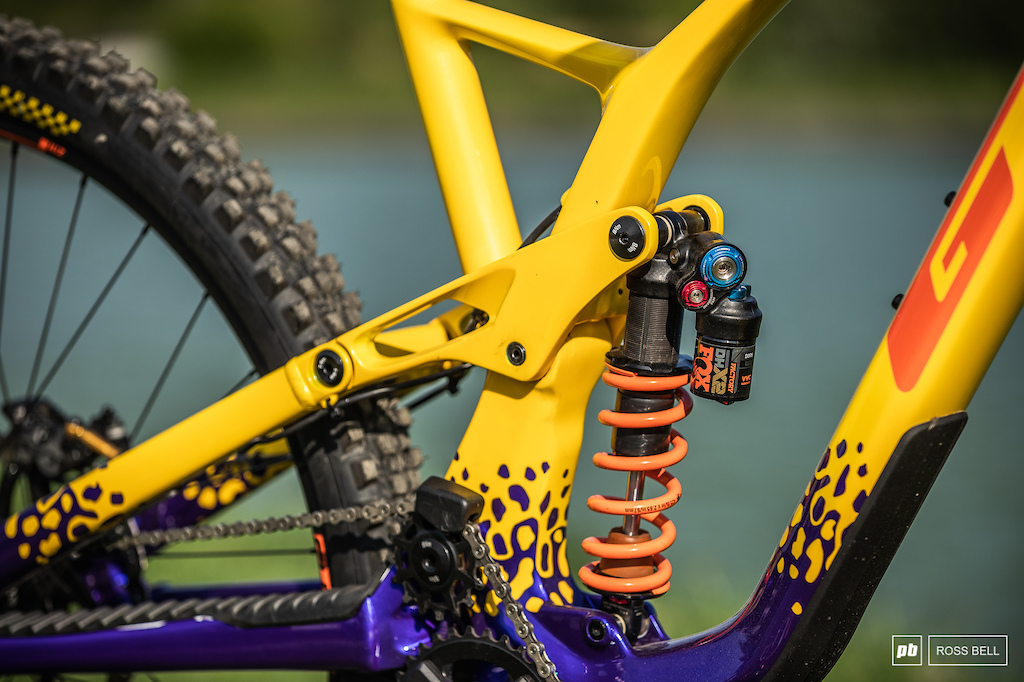 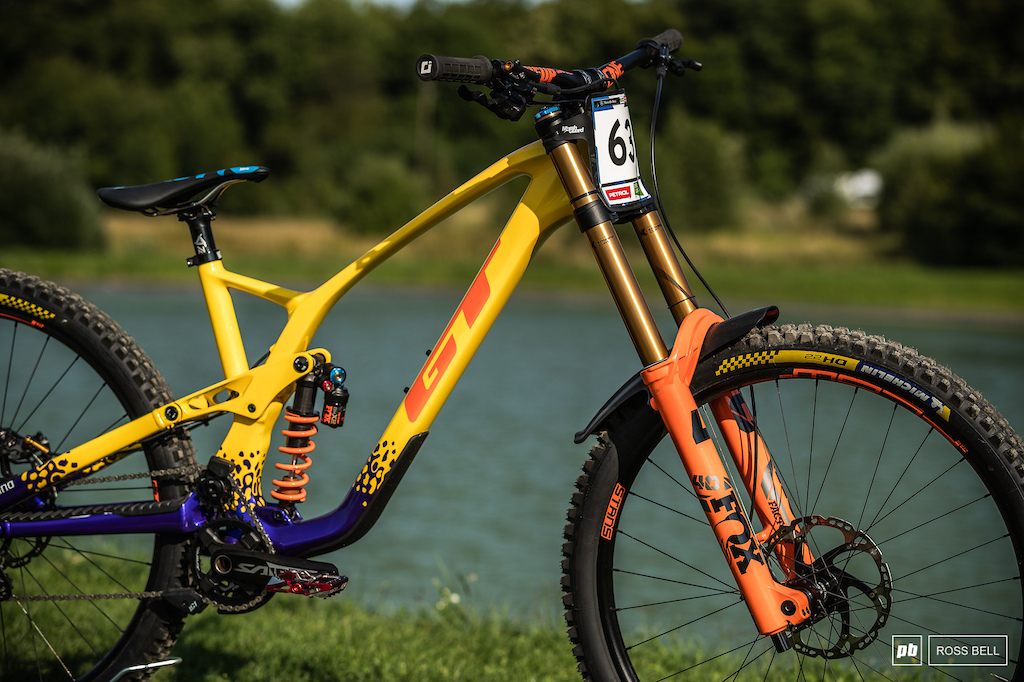 By running shorter travel front and rear than most riders on the World Cup track, Martin can play to his strengths with an ultra-maneuverable bike. 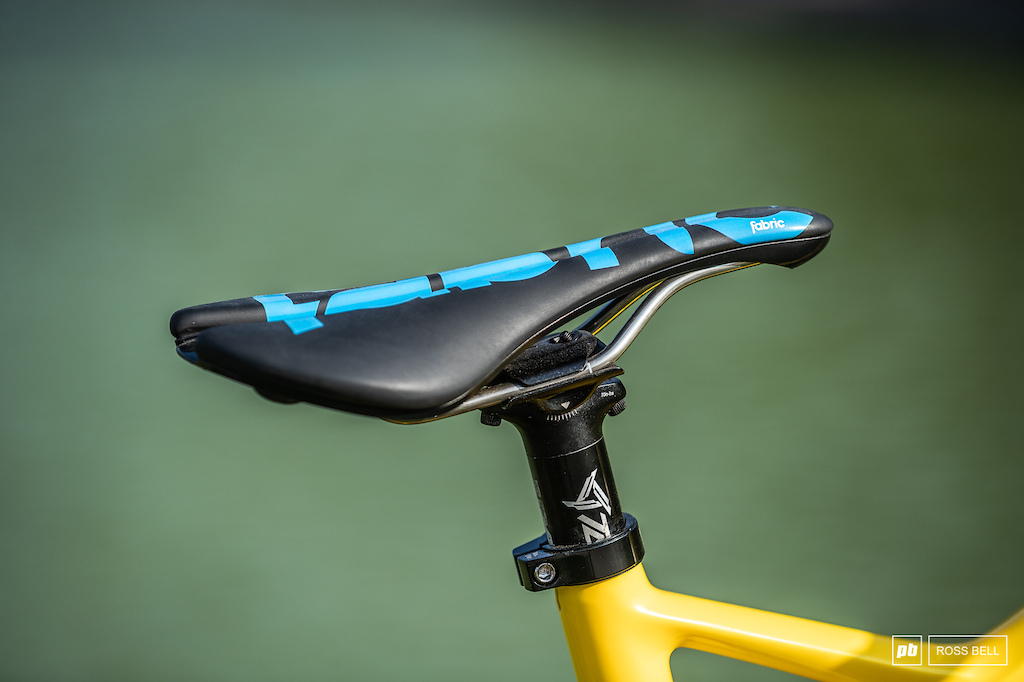 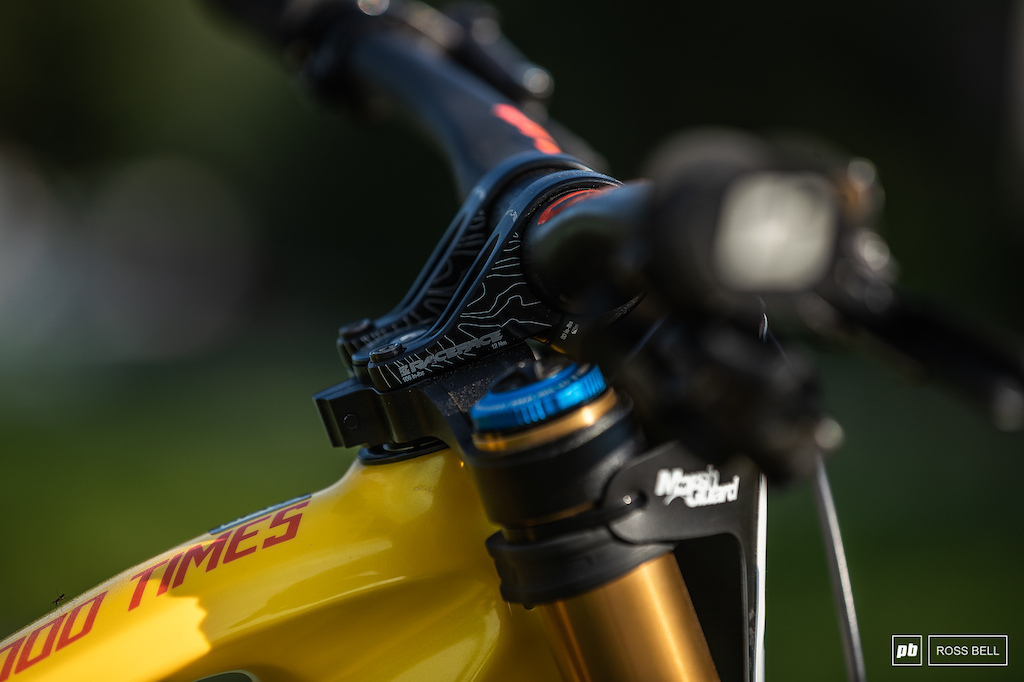 A RaceFace stem and seatpost round out the build along with a Fabric saddle. 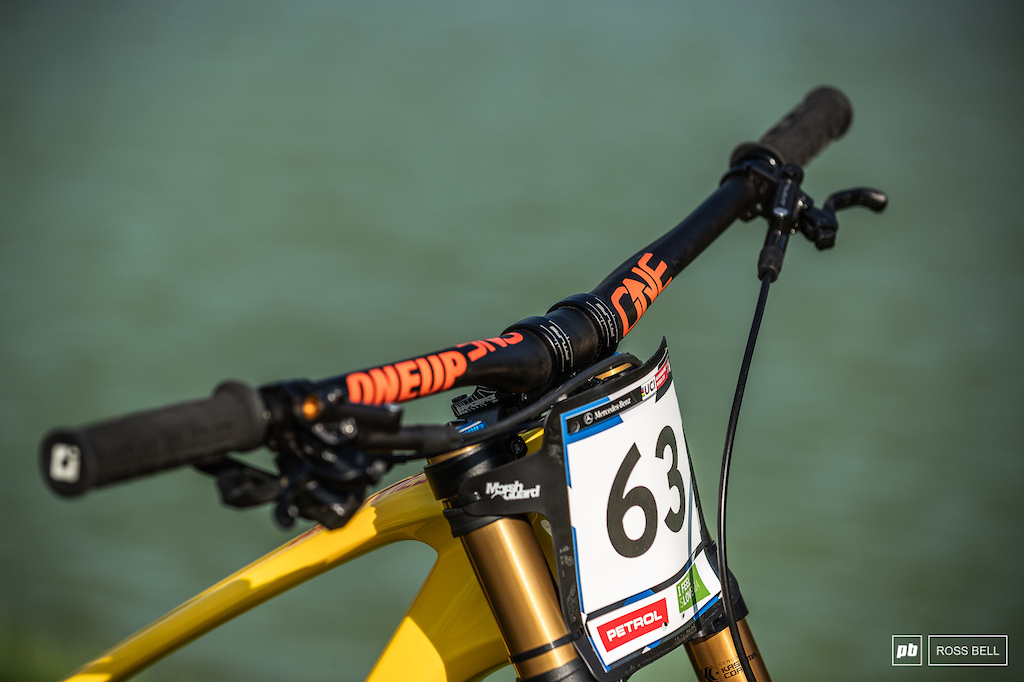 We expect him to have a lower number plate the next time he races a World Cup.

islandforlife (Aug 13, 2021 at 8:19)
And a dropper post. Why not? Would be great to hammer across the finish line... then casually pop the dropper and pedal around the finish area...haha.

bikefuturist (Aug 12, 2021 at 22:22)
I’m excited for this fusion of big enduro bikes and dh bikes! Great development for us average joeys hitting the park and natural terrain on one big bike.

DoubleCrownAddict (Aug 13, 2021 at 0:14) (Below Threshold)
Downhill bikes will usually be faster on World Cup DH tracks, unless it's a weak track.

bikefuturist (Aug 13, 2021 at 2:03)
@DoubleCrownAddict: sure, but I was talking about us mere mortals and being able to use one frame with either dual or single crown.

m1dg3t (Aug 13, 2021 at 5:55)
@DoubleCrownAddict: Enduro bikes are basically DH bikes with less travel and a steeper seat angle, so I'd think the differences would be negligible on all but the roughest tracks.

RockCrawler (Aug 14, 2021 at 3:29)
Lets go back to the Freeride Era and just mount a SC Fork on a DH Frame and call it a Day. A Demo 8 with a Single Crown and a Dropperpost would be the Dream Bike for me

betsie (Aug 13, 2021 at 0:05)
Enduro bikes as Dh bikes is the future probably.
It really works for the fork manufacturers to be able to sell 2 sets of forks for 1 frame. Doesn't work so well for the frame manufacturers apart from streamlining their portfolio.

Having been there with my VPfree, a Dh bike is faster than an Enduro/all mountain freeride as it was back then bike with a Dh fork on. So for pure racing Dh racing, the Dh bike is faster, bit not by much, a couple of seconds on a track at the top level probably, which can be a lot of positions.
For average Joe, doing a few Dh races, spending thousands on a Dh rig doesn't really make sense these days.

DoubleCrownAddict (Aug 13, 2021 at 0:17) (Below Threshold)
Only because everybody wants E bikes instead of DH bikes. But for World Cup, DH bikes are faster. He should be on a Fury for this track and this is a bad move.

Morrrice (Aug 13, 2021 at 2:57)
@DoubleCrownAddict: Sorry, I upvoted your comment, by accident. Should have been a downvote, and that was a bad move.

Will762 (Aug 13, 2021 at 8:01)
@betsie Sure it works for the frame makers too, as they get to repackage the main components, ie. front and rear triangles, with maybe a tweaked linkage, and voila, they've make a "downhill bike".

It works for the consumer too, if it gives you more options with one frame, why not. And as you say, most people, even if they enter a couple DH races per year, probably don't need a purebred DH bike.

mtnrush666 (Aug 13, 2021 at 6:37)
Could there be some marketing push behind this bike choice and coincidentally bike check? This bike that just came out. Definitely won't hurt sales for this new bike when shown that it is worthy of DH WC...the do it all bike at a great price...with a high pivot. GT is making the right moves!

dcreek (Aug 13, 2021 at 7:54)
Given that GT also has a DH bike and they like to be competitive in actual racing - I'd think Maes has tested both and found the Force to be quicker.

Lewis Buchanan did Hardline with his enduro bike with a few changes and finished 12th despite being all beat up from the crash in practice.

Fulgacian (Aug 13, 2021 at 3:47)
Hardline has a lot more than speed just to get to the finish line. And he finished 12th. Even Sam Hill raced with his enduro bike in Cairns a few years ago, and despite the never ending final flat section (which on paper should have favoured lighter enduro bikes), he ended up outside of the podium.

Hogosha (Aug 13, 2021 at 5:27)
I love that the line between enduro and DH bikes is blurring. I've been calling it for a while now, but im sure at some point we are going to see manufactures selling 200/200mm bikes with dropper posts and wide range cassettes.

mr-moose (Aug 13, 2021 at 1:06)
I've started riding with my bars like this in the last year and have found it helps to weight the front wheel and give more confidence in corners and steep sections. I should probably just get a longer stem but that's not as cheap.

islandforlife (Aug 13, 2021 at 8:24)
Yep and you're not supposed to do that with the OneUp bars. The oval shape works best in a certain position... the bars even have markings with head tube angle numbers to help you match the oval shape to your bike for optimum benefit.

mammal (Aug 13, 2021 at 11:05)
I also like that position for all my bikes. Feels like a better ergonomic position for my hands/wrists/elbows. I run aluminum bars though, I am aware that many carbon layups aren't intended for some positions.

jaame (Aug 12, 2021 at 23:23)
The only difference between enduro and DH bikes now is the fork, at first glance at least. If they said it's his Fury no one would have noticed.

eugenux (Aug 13, 2021 at 0:09)
maybe I just can't see it but, I can find out anywhere on the bike the word *Force*; I mean, it could be the future Sanction(Force with a different link, acording to the pictures I saw) with a 190 Fox40 instead of 180 Fox38. I guess, someone should check those ATC and see if they match, as in, mantaining the geometry.

if the Sanction will be 170-180, as long as the atc of the 190 Fox40 is around the same numbers as the 180 Fox38.. then, yeah, this bike could be exactly that and showcase the potential of fhe Force(/futurevSanction) frame.

TannerValhouli (Aug 14, 2021 at 5:53)
@Lans: trunnion won’t fit without a custom link. Stock link has 50mm of clear width and a trunnion mount is 54mm wide. Also that shorter length and longer stroke would likely cause parts of the frame to collide at bottom out.

I find that hard to believe, maybe check units :^)

wardo7 (Aug 12, 2021 at 21:43) (Below Threshold)
Wouldn’t be a Pinkbike article if there weren’t errors. I still don’t get why Pinkbike articles are constantly full errors and wrong information and have to always be corrected by commenters who are reading the article for the first time. Or is this like a running joke?

JonnyTheWeasel (Aug 12, 2021 at 22:16)
@wardo7: You missed the word "of" between "full" and "errors" in your second sentence. Please correct this at your earliest convenience.

And, if @wardo7 had any sense of humor, he'd have used "road bike" instead of "running" in the last sentence.

wardo7 (Aug 12, 2021 at 23:11)
Wow editing your own work really is hard because I suck. To be fair I don’t have a edit button and now I get to live with that chopped up excuse of a thought. I’m also not wrong about how quick commenters point out errors and I’ll also remove ability to write in basic sentence structure from my resume.

WishIWazFaster (Aug 13, 2021 at 2:35)
@wardo7: For what it's worth (i.e. nothing), I agree with the sentiment of your comment. (Downvotes be damned. :-P) As a fellow proofreading nazi, I notice errors in almost every Pinkbike article I read. I guess they don't have a very rigourous (English spelling) proofreading process before publication. Not many people are good at proofreading their own stuff.

Also, it's not unreasonable to expect a professional writer (somebody who gets paid to write) and content publisher (Pinkbike) to have significantly higher standards than the typical Pinkbike commenter. :-)

StansNoTubes (Aug 13, 2021 at 11:30)
@bishopsmike: That'd be Pantone Orange 021 on matte black. Height and curvature gonna vary by rim diameter and model and asym or symmetric, but it's 16mm height on the Flow EX3 Martin often runs, and they're about 274.7mm long. Decal thickness is closely guarded proprietary info. Some secrets we just can't share.

And hey @seismicninja thanks for the support.

JoseMPM (Aug 14, 2021 at 7:19)
Isn't the full team on the Force? Wyn's posts and pictures do seem tho show the Force and not the Fury. And in that case, curious decission.

Balgaroth (Aug 13, 2021 at 4:43)
Save some weight and 12spd wide range cassettes weight a ton, since it is unsprung mass reducing it when you can is the smartest thing to do.

cheetamike (Aug 13, 2021 at 7:49)
With high pivots designs popping up all over. You knew a triple clamp on an Enduro bike was the next step. Literally had this conversation yesterday with a buddy.

Becciu (Aug 12, 2021 at 23:50)
Probably it's not the smartest idea to make the shock a structural part of the frame, at least not on every kind of rear suspension

Balgaroth (Aug 13, 2021 at 4:46)
Because trunion is a terrible standard ? Shocks should be mounted on spherical bearings to reduce side loading which creates quick wear and binding. Trunion does the exact opposite and heavily transmit to your shock every single frame side load.

sonuvagun (Aug 13, 2021 at 0:48)
Unless someone paints the coil and fork, there aren't a lot of choices which won't clash with that orange.