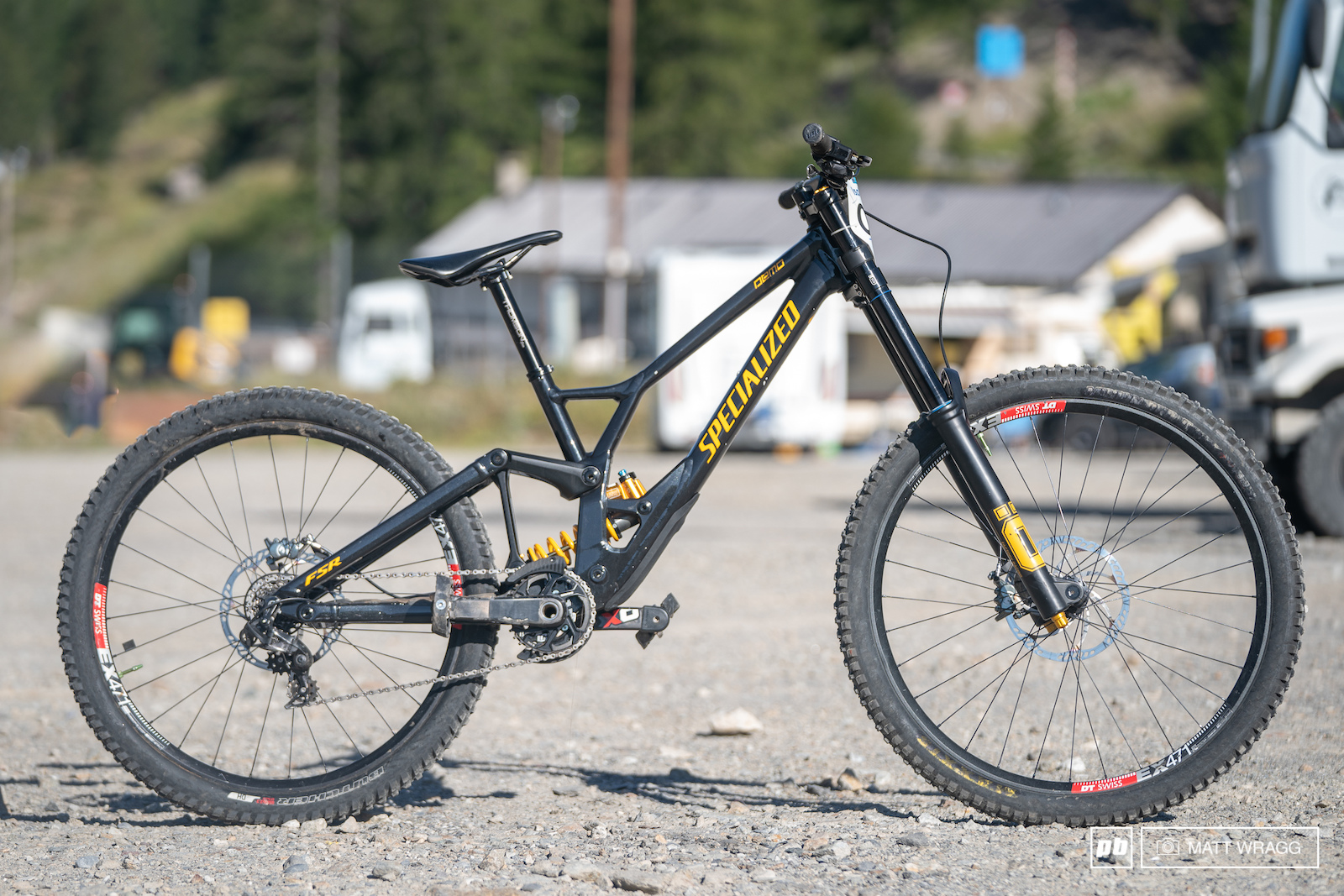 There is more than one rainbow jersey in the Bruni household from 2019. While Loic may have won the big show, his father, JP, took home the 55-59 gold at the Masters' competition.

While the elite competition has been rescheduled because of Covid, the Masters competition has been outright cancelled and he is waiting to find out if he keeps the jersey for a second year. A doubly disappointing situtation for him, when you realise that the race was set to be held in Pra Loup, just a couple of hours drive from his home in Cagnes-sur-Mer.

In fact, JP holds more DH titles than his son with 9 Masters Worlds titles and 12 national masters titles. Back around the turn of the millennium he won the Transvesubienne three times, he has competed in the Megavalanche 22 times and with his friend he took silver medals in the French tandem championships three times. Away from the tape he is also one of the driving forces behind US Cagnes - a club that is lies at the heart of the astounding success DH racers from the region have achieved, encouraging young riders and supported those that are keen to race and progressp. 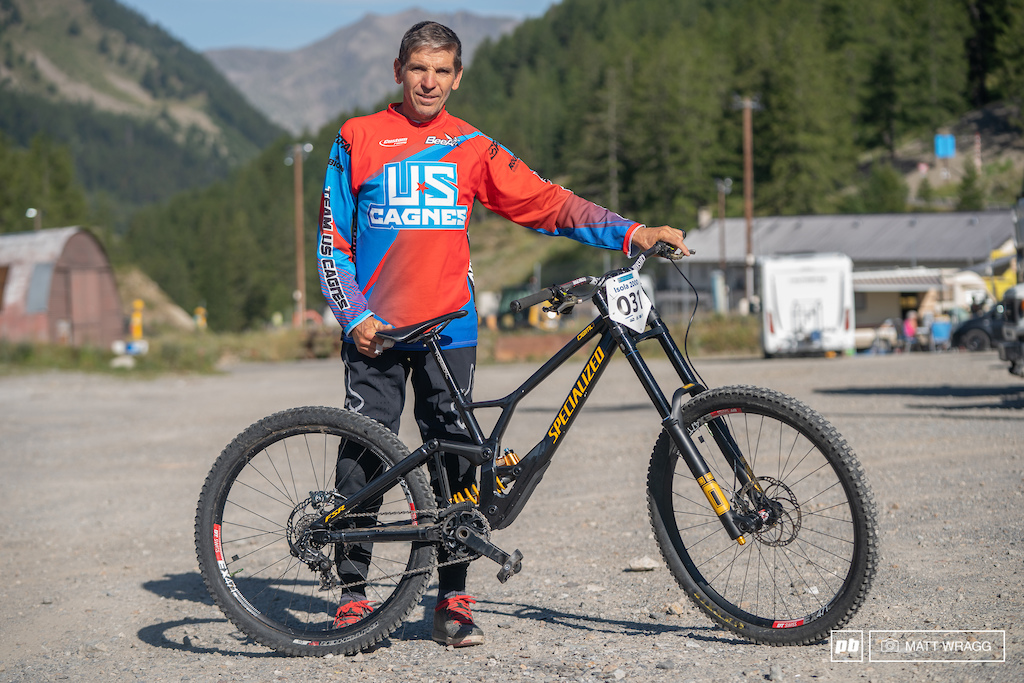 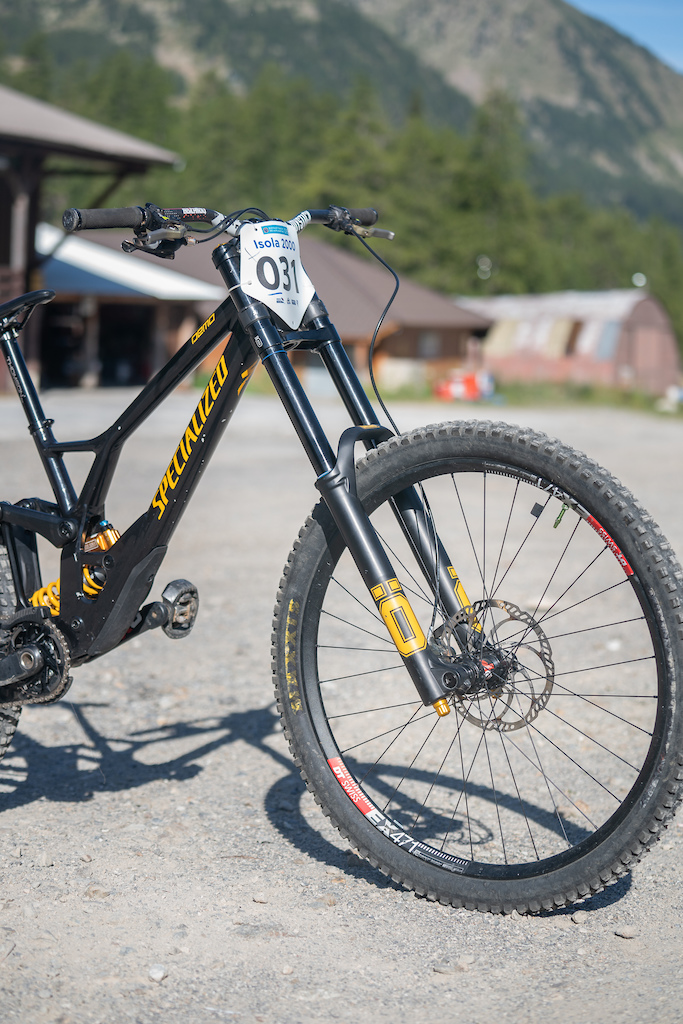 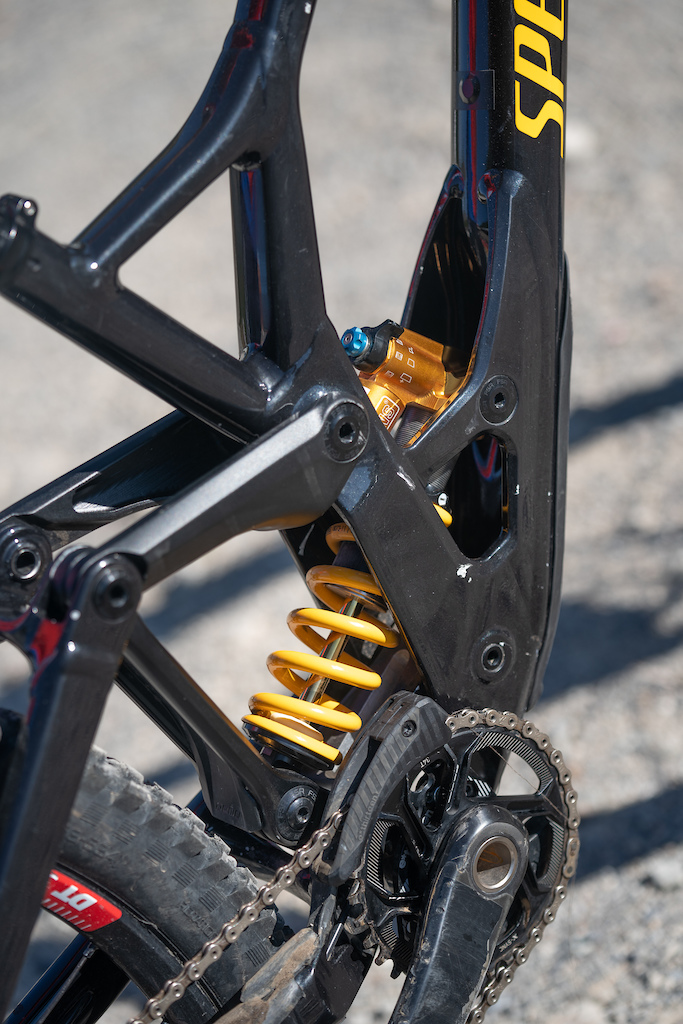 When it comes to setup he is not fussy, and doesn't know what pressures or springs he is running. That said, Loic's bikes are renowned in mechanics' circles for being the best set-up bikes on the circuit, with Jack achieving an unmatched level of precision when it comes to the details, and there are more than a few elite racers who would simply say "thank you" and not worry about the finer details if they had the chance to get their hands on one of them. 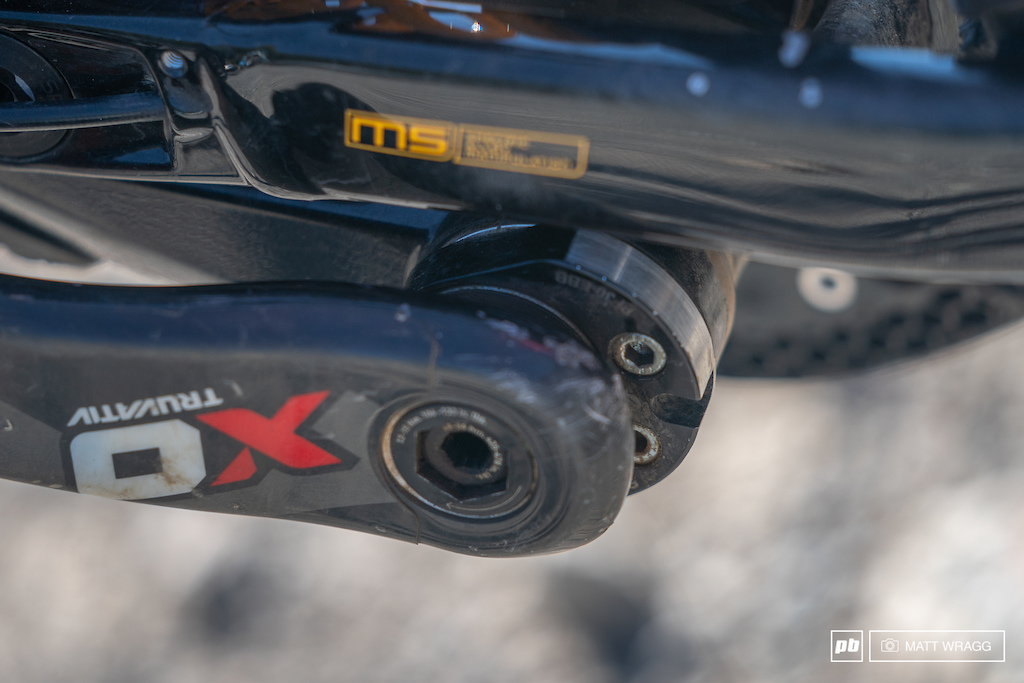 Whether this detail has been picked up on one of Loic's race bikes is unclear, but this eccentric bottom bracket system from Wheels is an interesting touch. The system was originally designed for singlespeed bikes, to allow you to tension the chain using the bottom bracket rather than an exposed tensioner at the rear axle, but Specialized have clearly seen more utility in the system. With the race bike sporting long chainstays already, there is no need to adjust chainstay length to switch the bike between 27.5 and 29, so the only parameter you need to adjust is the BB height to compensate for the axle height. Using the BB-based system means they can raise and lower the BB independently of the rest of the geometry, although there is bound to be some effect on the kinematic. While the system is fitted with an eye on BB height, there is nothing to stop you using it lengthen or shorten the chainstays on the horizontal axis (although there would probably be some trade-off in BB height) as it is easy to forget that chainstay lengths are measured from the center of the BB. 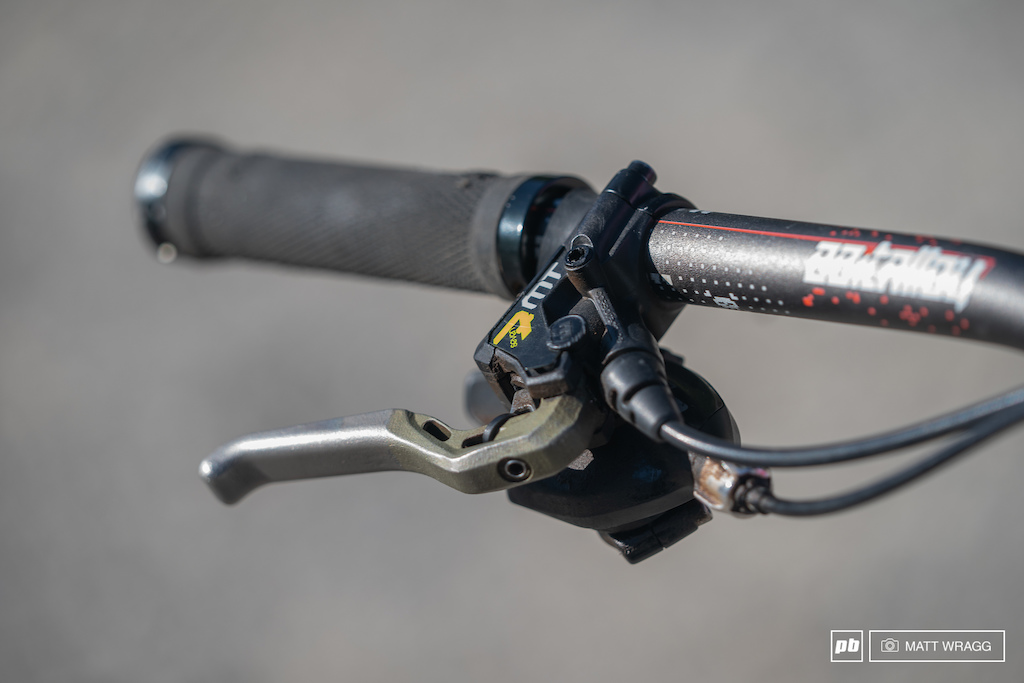 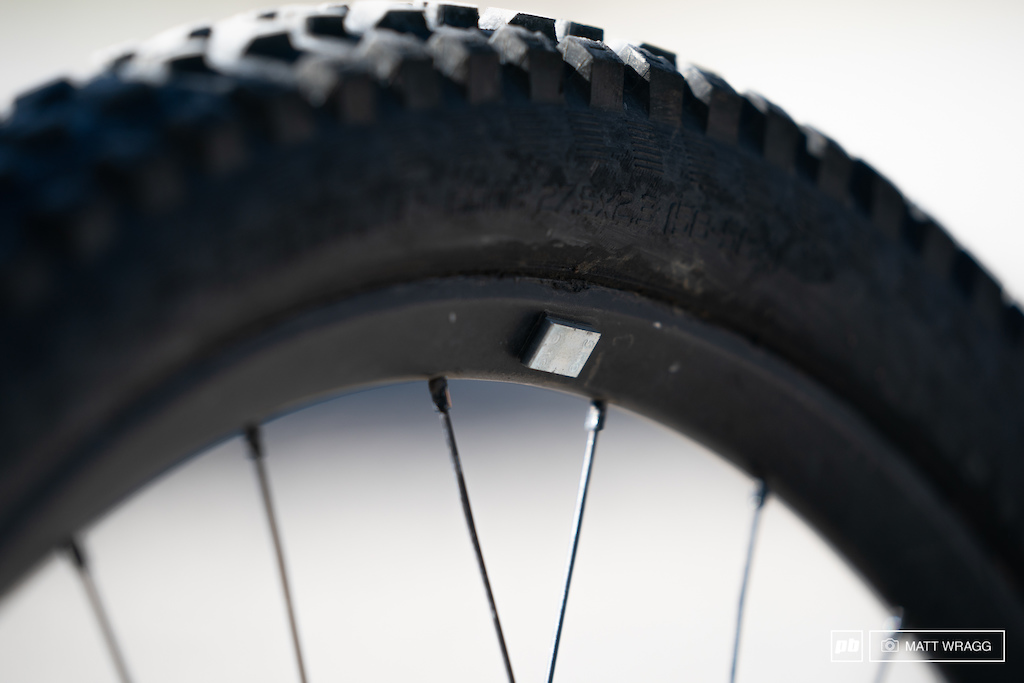 The two other factory touches: while the calipers for his MT7s are standard, at the lever he uses the custom blades designed for Loic. Secondly there is another Jack detail on the wheels - counterweights to balance out the valves so the weight distribution for the wheels is perfect and they can spin more freely. 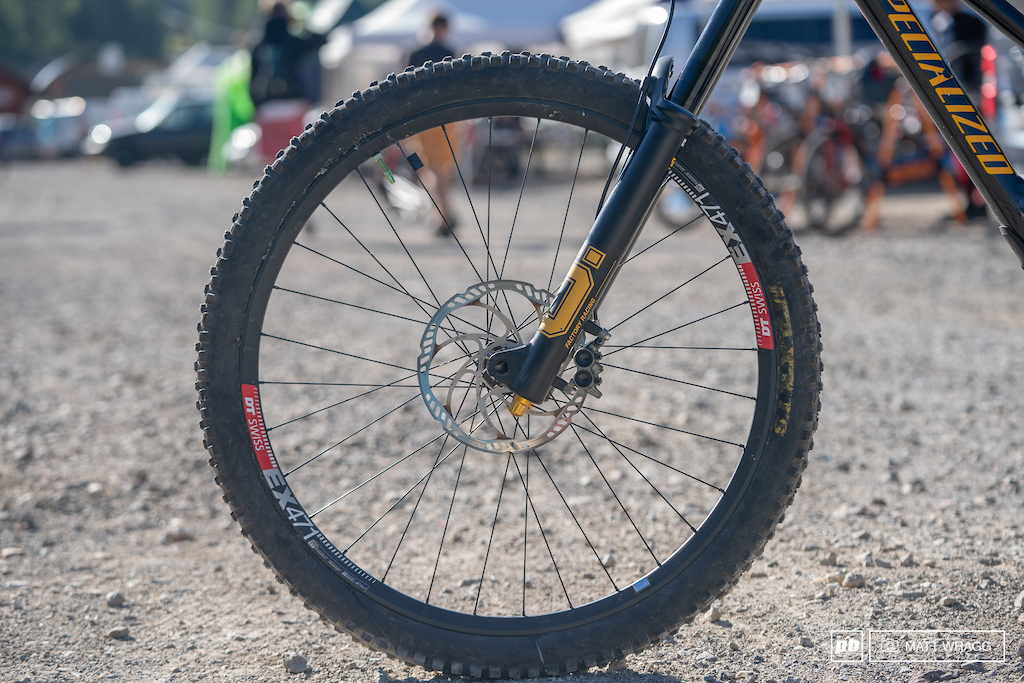 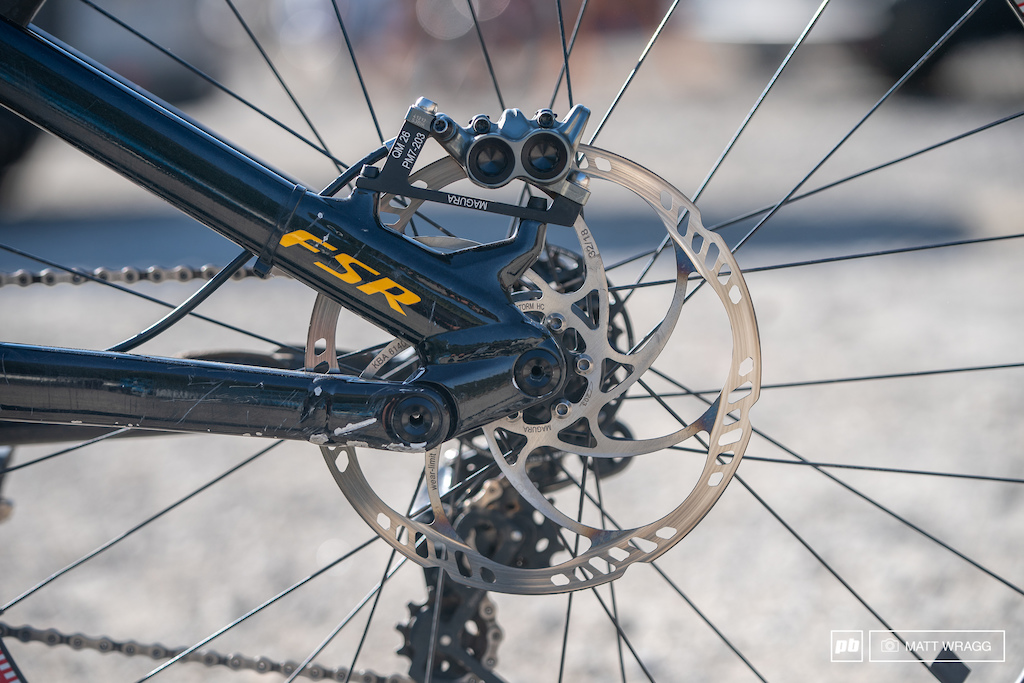 JP hasn't wasted time experimenting with different wheelsizes - the bike arrived with 29/27.5 with DT's legendary EX471 rims and he's happy as it is, stopped by 200mm discs at either end. 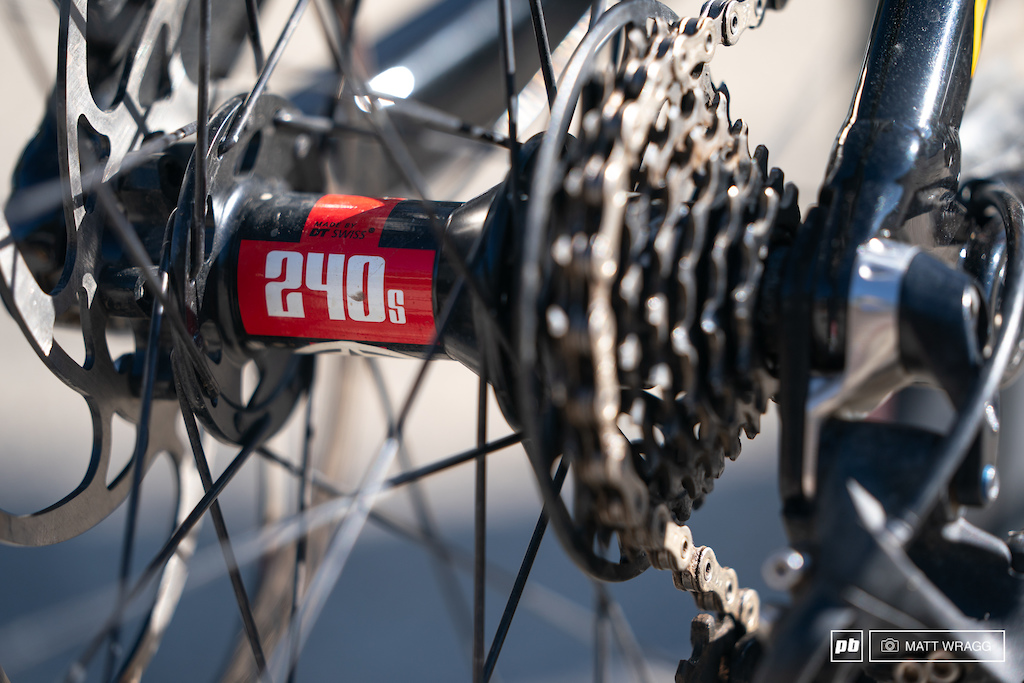 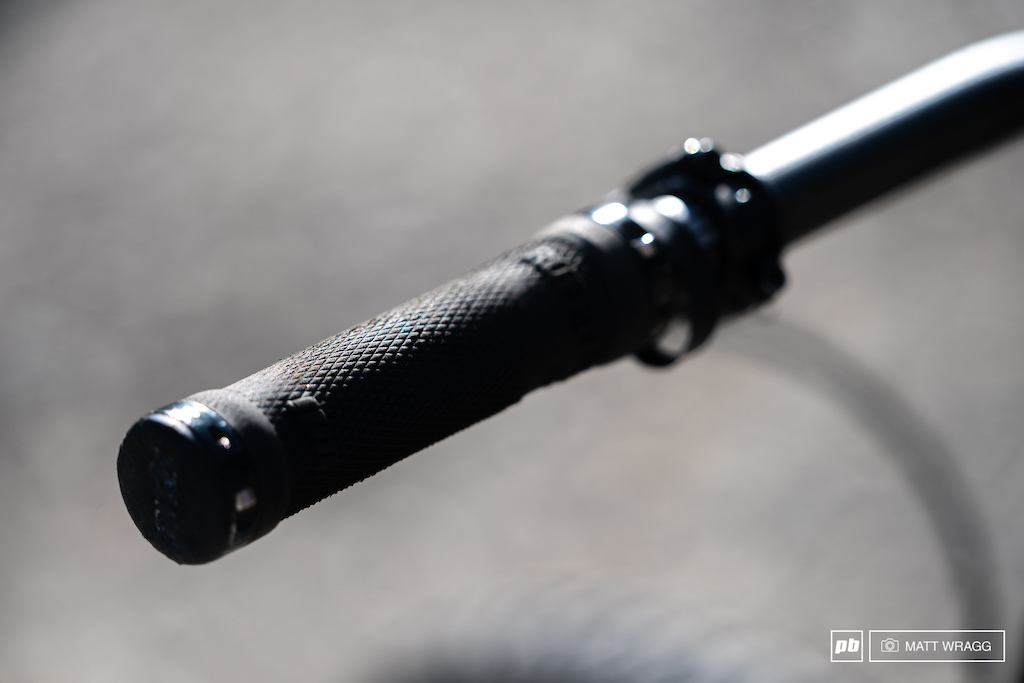 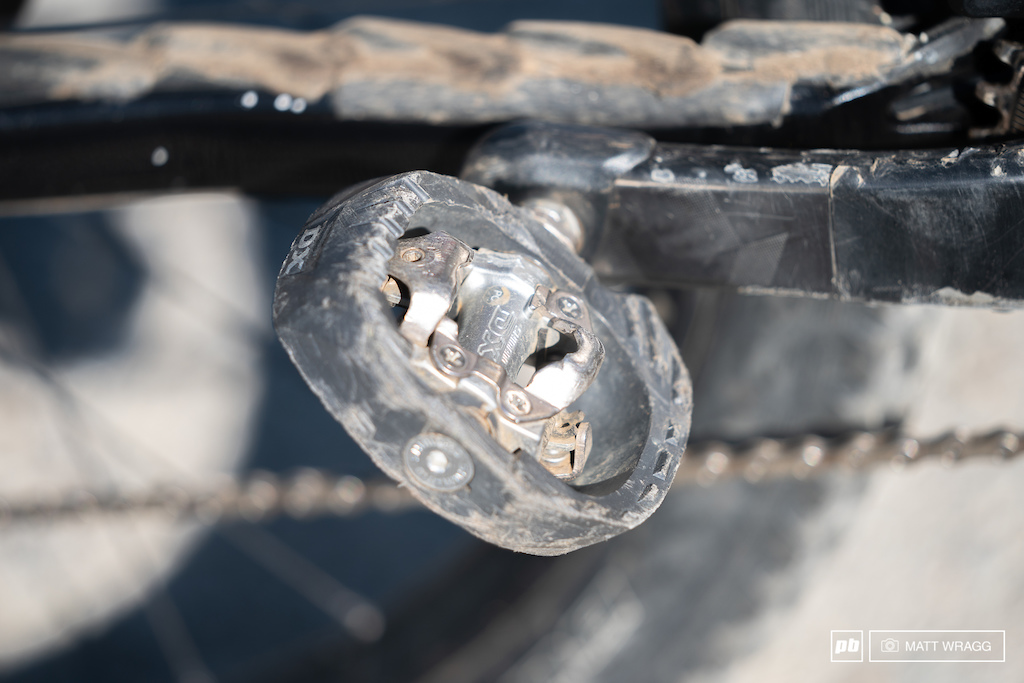 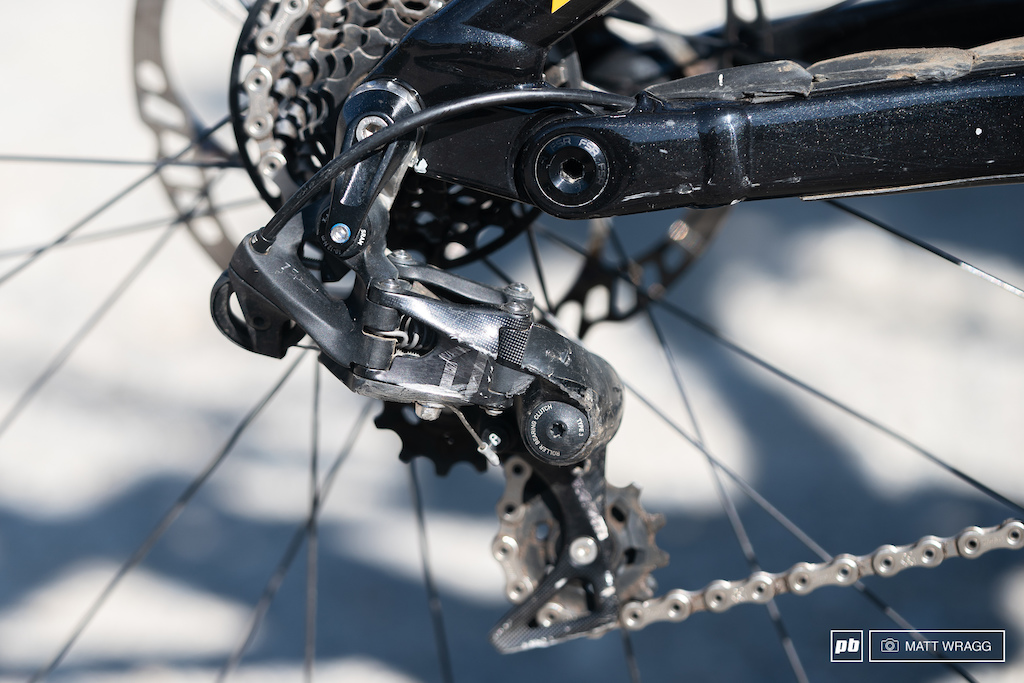 Mugen (Aug 8, 2020 at 11:40)
The TLDR version of this article is "JP Bruni isn't too fussy about setup, when his son gives him the fastest bike in the world, with custom parts and set with hundreds of hours of data logging based tuning"

Bearorso (Aug 8, 2020 at 8:30)
That was something that struck me checking out the bike set ups at the Worlds (and, many World Cups) last year - so many 471s in use by so many riders. But, they are not using monster sized tyres, and many have access to the best tyres, and, they are going for speed. Me, I run fat bastard tyres, in the hope of not getting a puncture, 'drag' doesn't slow me - I'm in my 7th decade on this Earth, so, getting ever slower, naturally.

SnaggleNut (Aug 8, 2020 at 14:46) (Below Threshold)
@kleinblake: I think it's more about tracking the ground and keeping the entire wheel a bit lighter. It ain't their strongest hoop. If you look at the shape it appear to be pretty strong vertically being so deep, but less-so horizontally. I doubt they stay true for long on rocky downhills. I only have DJ experience with them and they were decent for that.

nicklesterrides (Aug 8, 2020 at 1:36)
That's the Sharpie being rubbed off I reckon...would seem to suggest Loic at one point ran Maxxis instead of Specialized rubber

Solozime (Aug 8, 2020 at 2:13)
@nicklesterrides: The Specialized dh guys all use Maxxis tyres for racing and have done for a while. For photos they either have Specialized tyres but back on or they turn the bike non drive side to hide the logos. Look at all of Finns podium bike shots from the Crankworks events.

RafaGamas (Aug 8, 2020 at 3:44)
@nicklesterrides: I'm almost sure the rear tire is a specialized. The front one is a blacked out maxxis for sure. Maybe specialized don't have 29'' DH tires...

zyoungson (Aug 8, 2020 at 4:03)
@nicklesterrides: Spesh team have been running maxxis tyres for a while, ever since Loic started winning consistently.

jaame (Aug 8, 2020 at 10:54)
@RafaGamas: I have read that before. They are allowed to use whatever fronts they want because Spec does not make a DH casing 29er.

RBoardman234s (Aug 8, 2020 at 15:49)
@jaame: After some heavy IG stalking it looks like the he started running Maxxis in 2018 to present. And wait... isn’t that the same timeframe he got insanely fast and confident?

jaame (Aug 9, 2020 at 2:42)
@RBoardman234s: I was under the impression he only uses maxxis tyres on the front. Specialized on the back.
Certainly he has won at Cairns on a Butcher/Slaughter combo. I know because I bought the combo after seeing that advert. I found them to be pretty good tyres for the money. On dry hard packed dirt, they perform very well. Perhaps compound is less important on that surface. Also it’s a moot point now because the tread patterns changed at the same time as the compounds and the move to Viet production. I haven’t tried the new patterns except one day on an ebike.

EnduroManiac (Aug 8, 2020 at 2:47)
Always praising the counter weights to balance out the weight of the aluminium valve. Considering imbalance generated by the tire is not aligned with the valve, I doubt the counter weight is positioned properly. I believe counterweights make sense for those large diameter, heavy and fast spinning tires. But I would like to see it made with a proper machine, same as for cars or motorbikes.

Mattysville (Aug 8, 2020 at 5:10)
I would have to agree. The way the balancing machines work for car tires is by spinning them at speed and looking for weight distribution. The tires are what is causing the majority of the imbalance not the valve stem. I feel like this is one of those trends like the guys who were taping lead weights around the BB a few years back to help make the bikes more stable, just randomly placing weight were you think it belongs and see how she goes. If there is any benefit it’s probably in the riders head as much as in the stopwatch.

R-M-R (Aug 8, 2020 at 7:21)
It's not that difficult with a bike wheel: put it in a truing stand and the wheel will rotate until the centre of mass is straight below the axle. Add weight opposite this until there is no tendency to rotate.

It's not a bad technique and produces good results.

lognar (Aug 8, 2020 at 9:10)
I remember a bike check from Aumary, where he said he can feel the vibration when going mach speed

R-M-R (Aug 8, 2020 at 9:21)
@lognar: That's plausible. Wheel imbalance is a cause of "speed wobble" in road bikes, where the rate of wheel rotation hits a harmonic frequency of the bike and the whole thing shakes violently, often causing a crash.

Sleeved rims are the main source of the imbalance on road bikes. Mountain tires are a lot heavier and a little variance in the thickness of rubber, puddle of dried sealant, or other imperfection can also cause it.

jaame (Aug 8, 2020 at 10:57)
I hope he avoids muddy puddles and cowpats. I had a cowpat on my front tyre the other week that must have weighed 1kg. The vibration it caused almost sent me off the bike. One second I was cruising along smoothly, the next I was holding a jackhammer. It was insane.

lognar (Aug 8, 2020 at 9:14)
Interesting that the demo frame doesn't have a minimum rotor size of 200mm, and needs mount adapters for 200mm, why design a DH bike that can use smaller rotors?

ThreadedBB1day (Aug 8, 2020 at 10:52)
I also wound up putting cable ties through my Magura levers due to the break away being weak beyond belief. I broke one of those break aways while WASHING my bike by hand. It’s literally the only downside tho.

Plancktonne (Aug 8, 2020 at 23:31)
@ThreadedBB1day: go shigura, complete XT levers cost less then the HC3 levers and it so much higher quality its not even funny, no plastic crap.
I just switched after 2 magura levers broke in a span of a year (scary stuff on a downhill), and couldn't be happier, the stopping power is insane and so consistent.

ThreadedBB1day (Aug 9, 2020 at 8:23)
@Plancktonne: The interesting thing is that I have a full XT brake set laying around, been thinking about it but I much prefer the larger blades of the Magura. Maybe do XT levers with those rubber condom things on them, really bastardize my ride.

caebalcog (Aug 8, 2020 at 9:42)
Does anyone know what the additional black derailleur mount is/does?
Strengthens the hanger?
Sharper shifting?

cougar797 (Aug 8, 2020 at 9:50)
That’s been a spec thing for a long time. It’s just a brace that clamps over the axle end and then sticks a little rod down into the derailleur head end to support and keep everything straight. It actually works really well to strengthen the hanger.

hamncheez (Aug 8, 2020 at 19:12)
I've always been curious why specialized does this. Isn't the whole point of a derailleur hanger is that it's supposed to be easy to break so that it breaks instead of your derailleur?

cougar797 (Aug 9, 2020 at 4:44)
@hamncheez: Any hit burly enough to bend a hanger is likely going to take a derailleur. What a hanger does do is not permanently attach said bendy part to your expensive frame. The spec guard just makes the bendy part last longer at no expense to the frame.

husstler (Aug 8, 2020 at 12:36)
What could this guy possibly know about supporting and encouraging young racers?!

Bearorso (Aug 8, 2020 at 8:24)
I thought he'd won his class at the Masters Worlds last year on a frame that took the Fazua E system, but, with the battery - or, indeed, the whole system, removed. I got it wrong, I guess.

dinosaurmonkey (Aug 9, 2020 at 9:06)
Well lets see, he holds a shit ton of titles in DH racing and spawned the fastest rider in the DH world sooooo... What you got?

Mondbiker (Aug 10, 2020 at 5:37)
@dinosaurmonkey: I haven´t seen any wheel balancing titles mention for Bruni, have you?