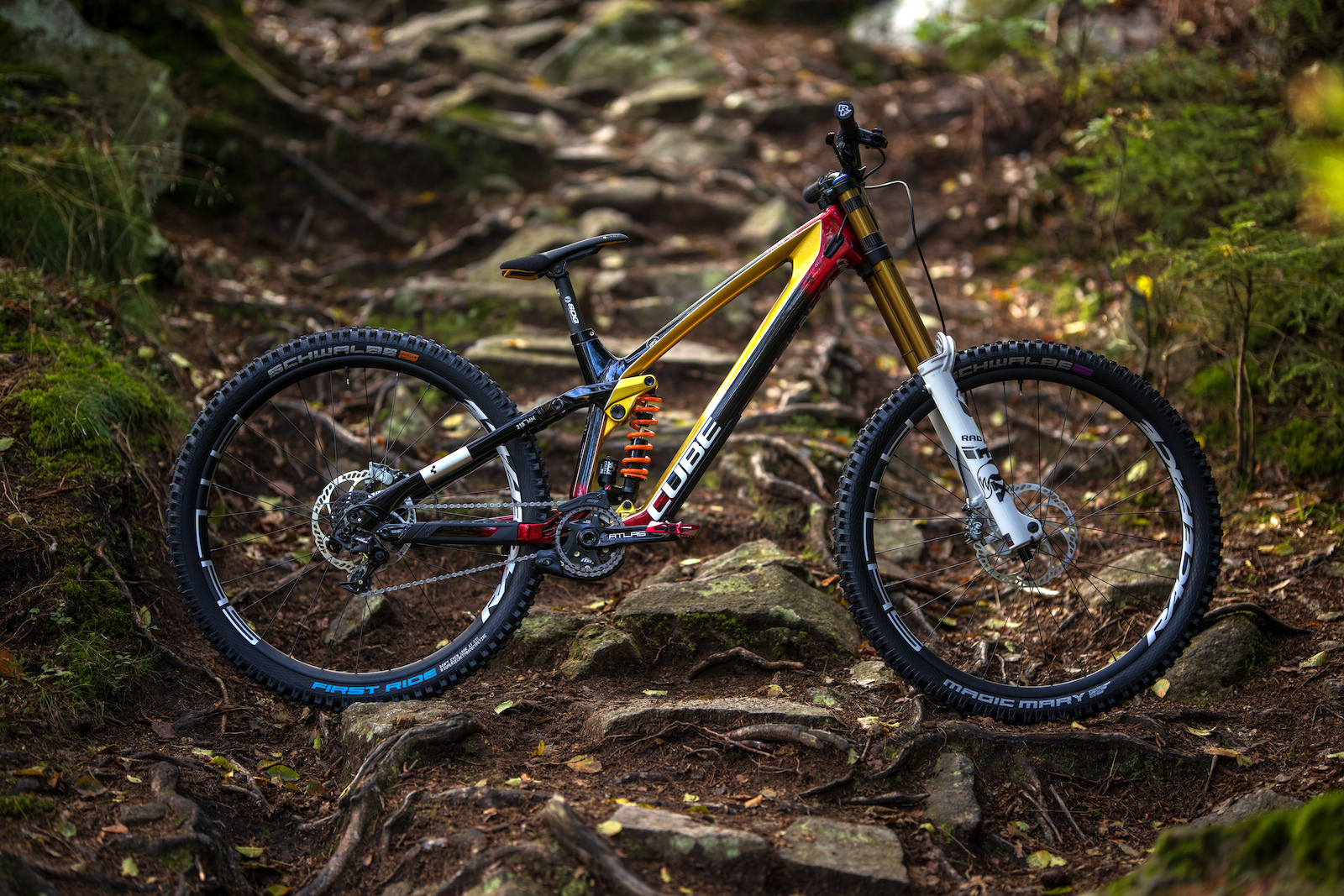 Max Hartenstern's
2021 Cube Two15 HPC
Bike Check
Last month the sole race of the IXS Downhill Cup was also the German Championships with Steinach in the Thuringia Forest as the host. The reduced capacity event was successful despite the wetter-than-an-otter's-pocket conditions and the man who stood atop the podium in the Elite class was Max Hartenstern aboard the recently released new Cube TWO15.

Max, who's part of the Cube Global Squad, ended up with a commanding 3.15 second lead over second-place once racing was finished and has been selected by the German federation for the World Champs in Leogang this week. Here's a look at his German Championship winning machine that will be in action on the Austrian slopes in just a few days. 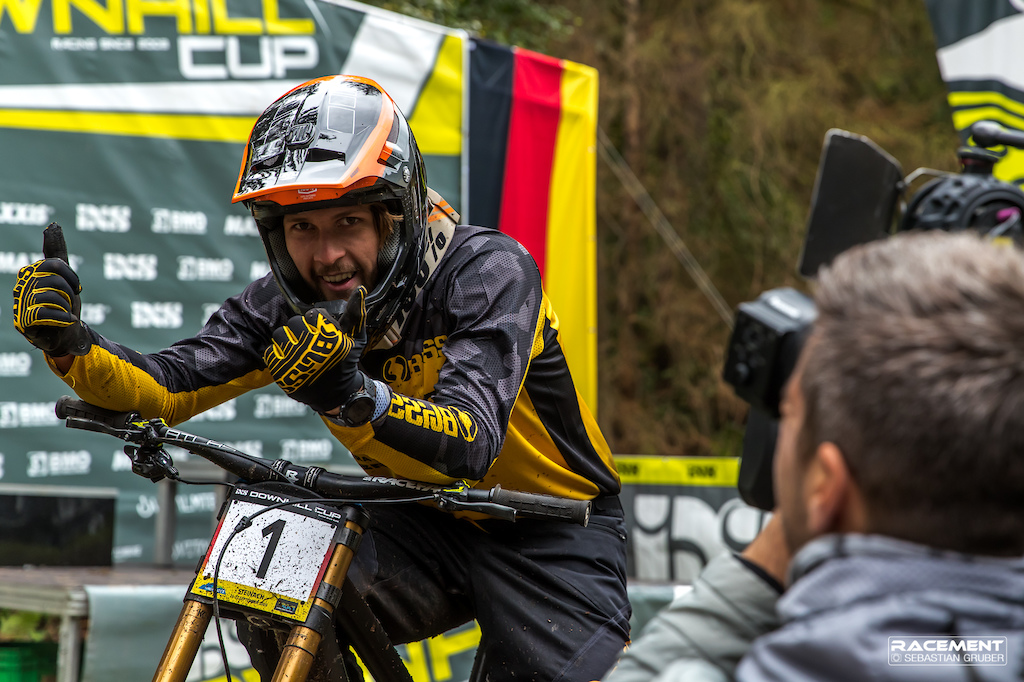 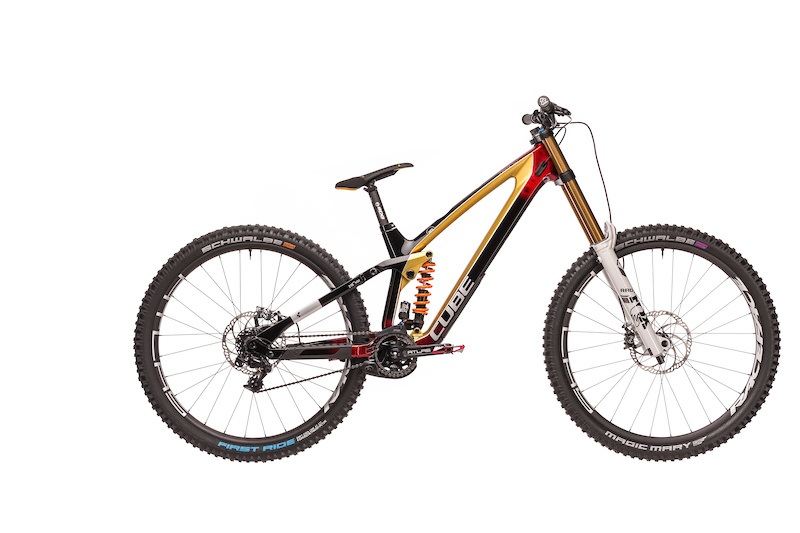 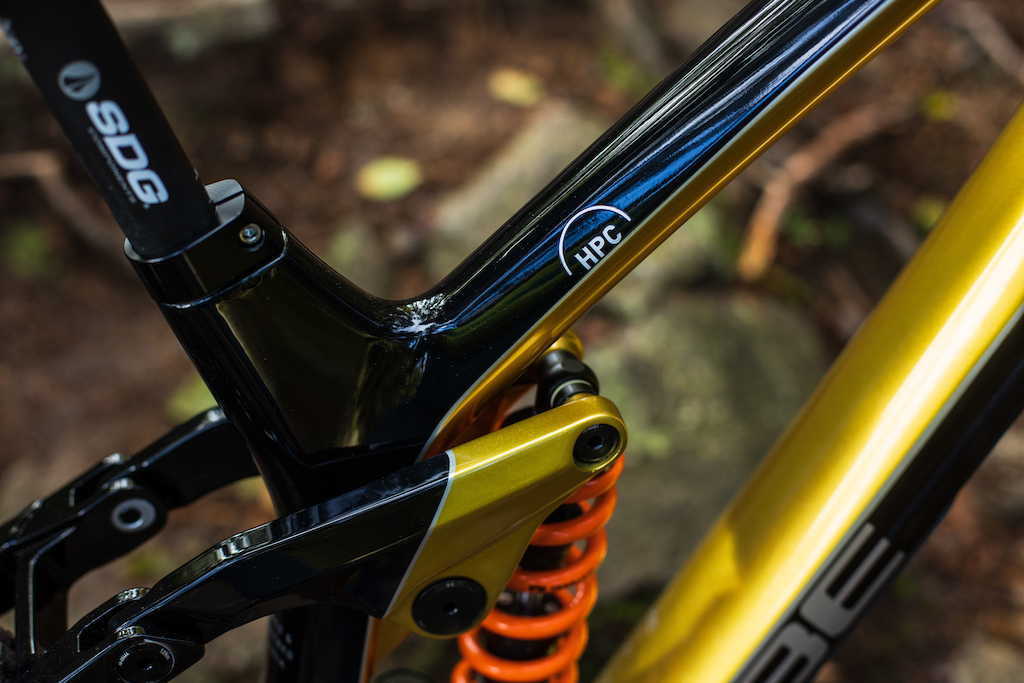 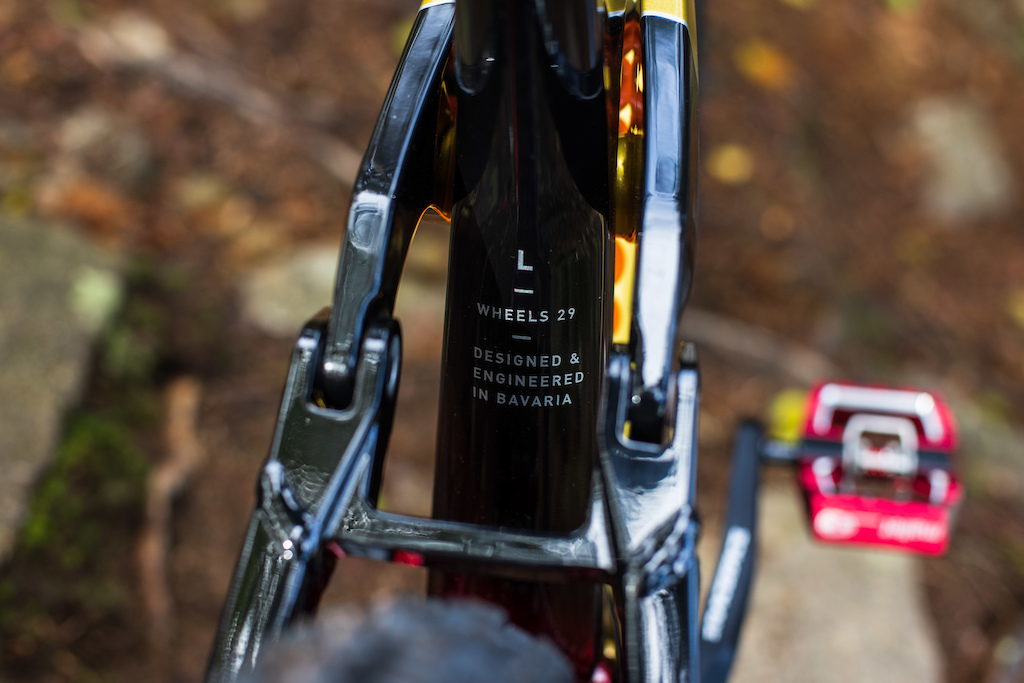 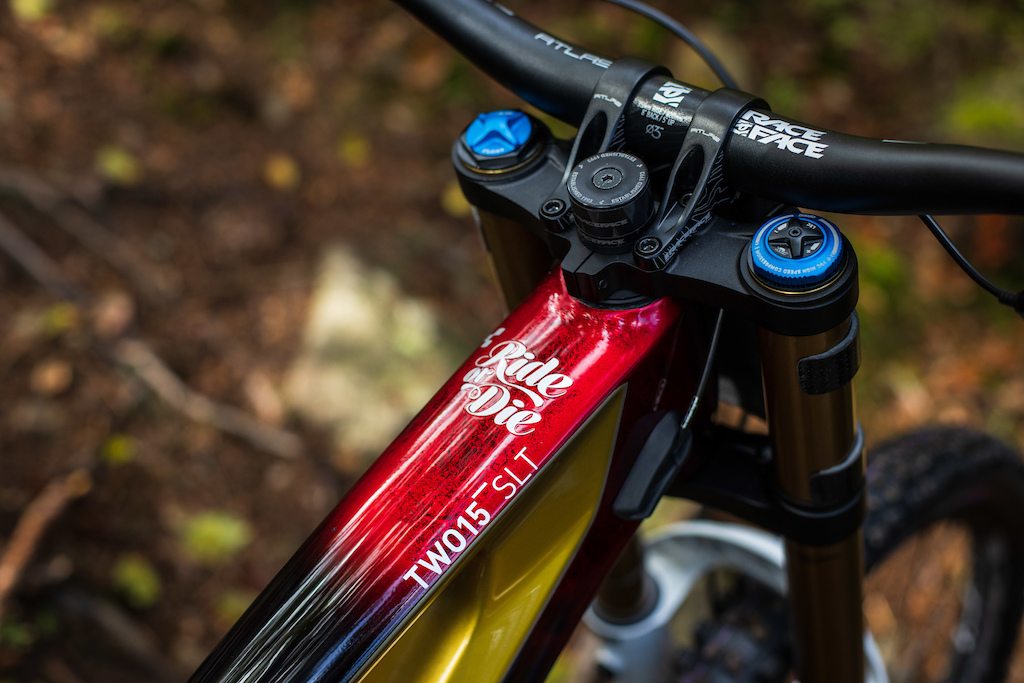 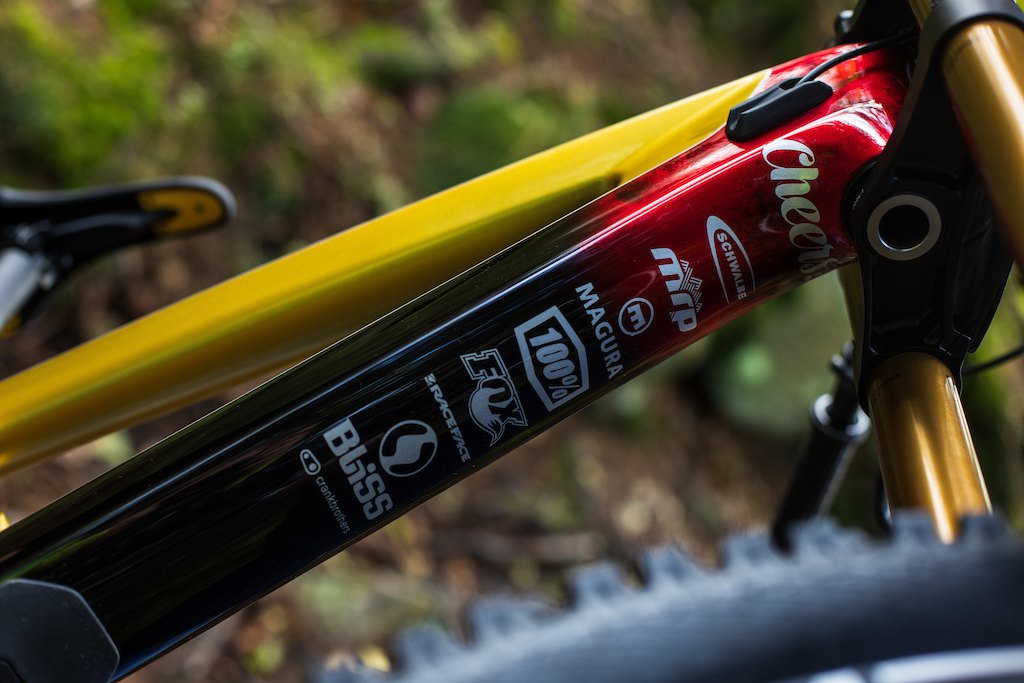 At 184cm tall, Max is on the size L HPC version that uses 29" wheels front and rear and a composite mainframe and rocker link mated to a 6061-T6 aluminium chainstay and seat stay. The frame is custom painted in the German flag colours, adorned with the sponsor logos and even some top tube motivation that lines up with the stereotype of the German's love for logic. 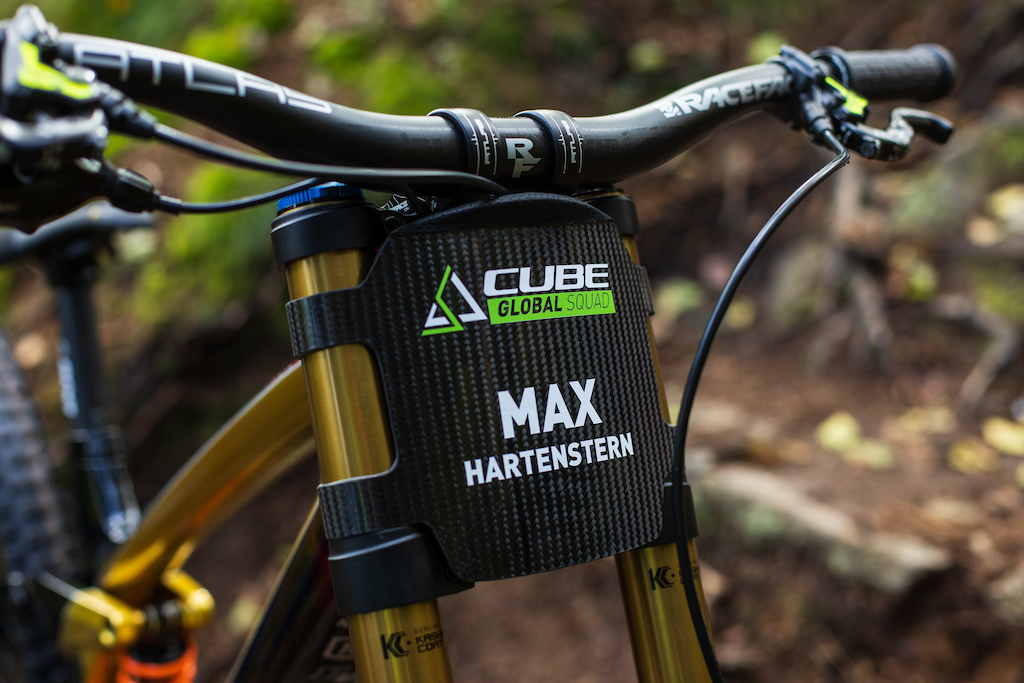 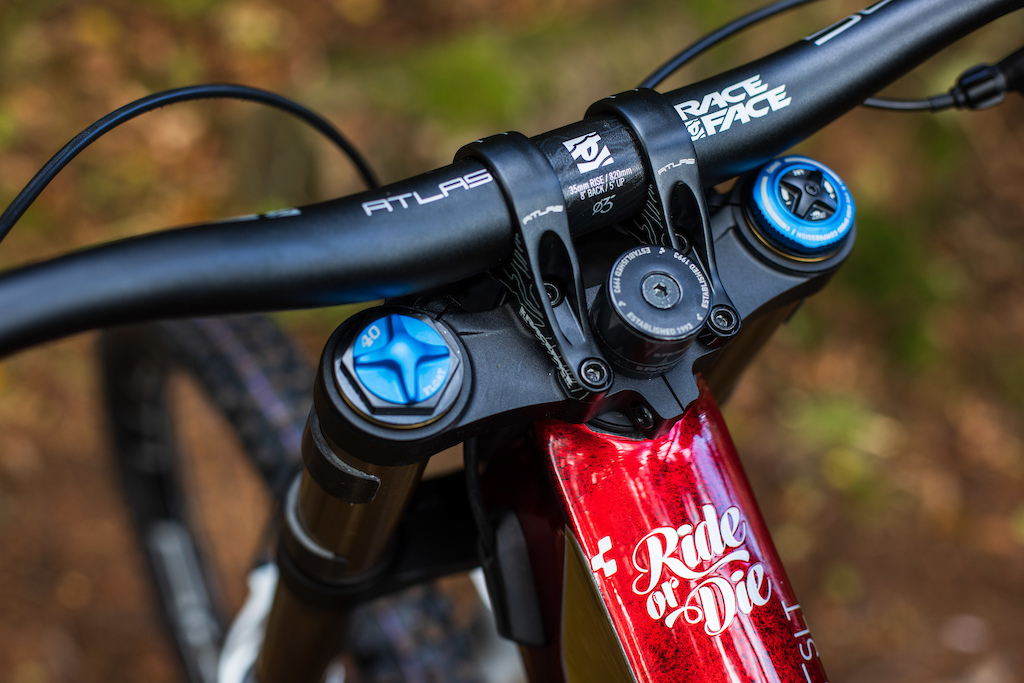 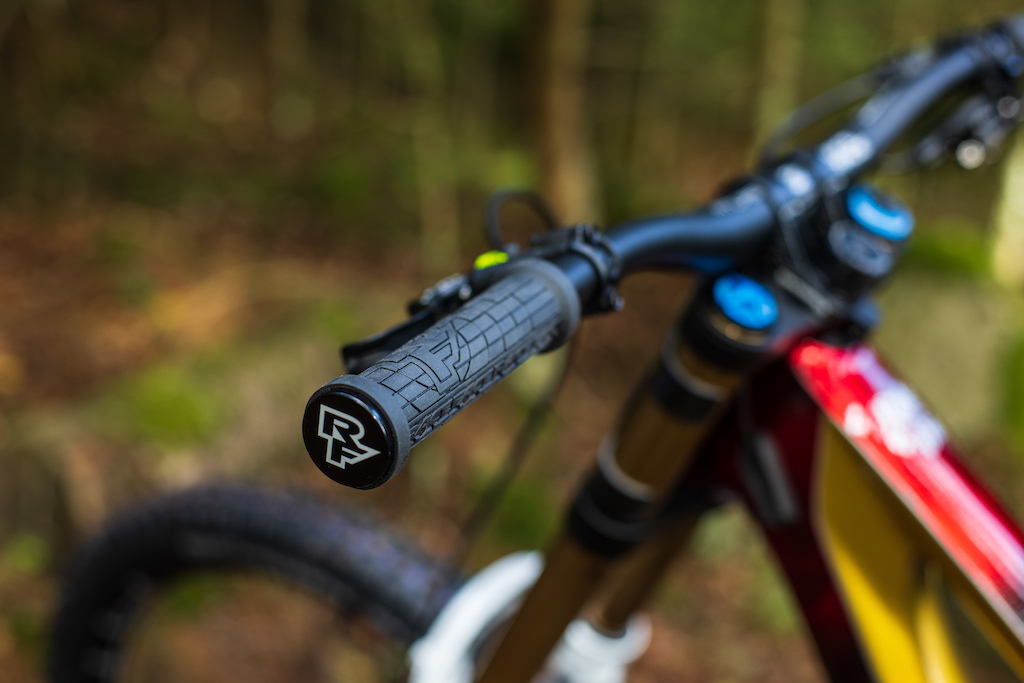 The TWO15 HPC is a race focussed bike and so a permanent fixture on Max's bike is the number plate holder. That way the bike can be set up once with the number plate in place and each race's individual plate easily mounted with less faffing with cable routing. Bars, stem and grips come from Race Face with Max on the 35mm rise Atlas bars and 50mm long Atlas stem. 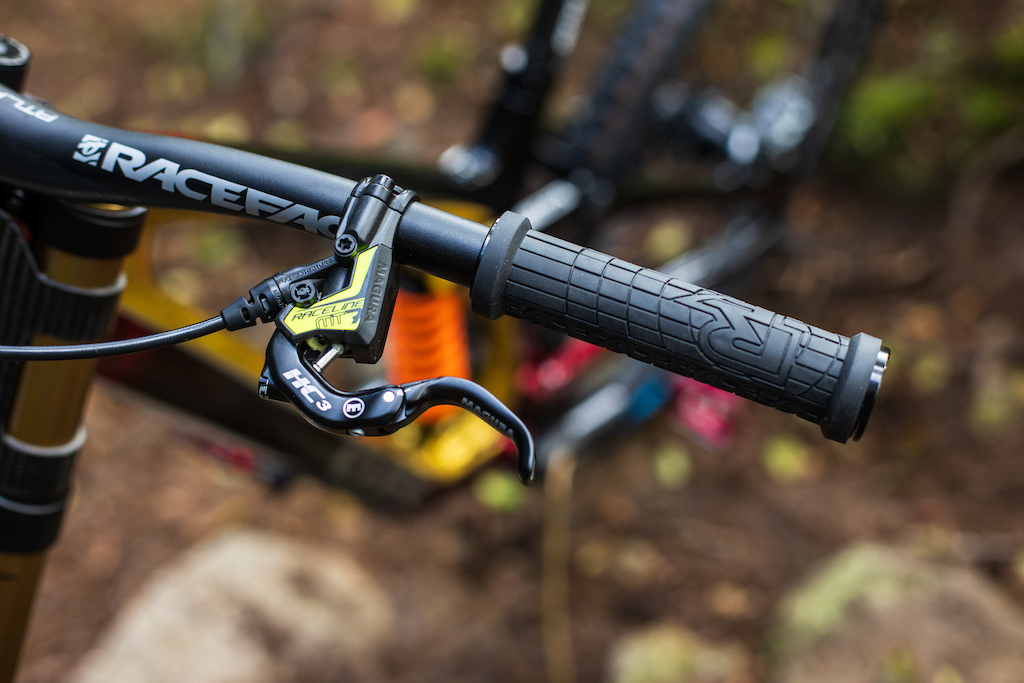 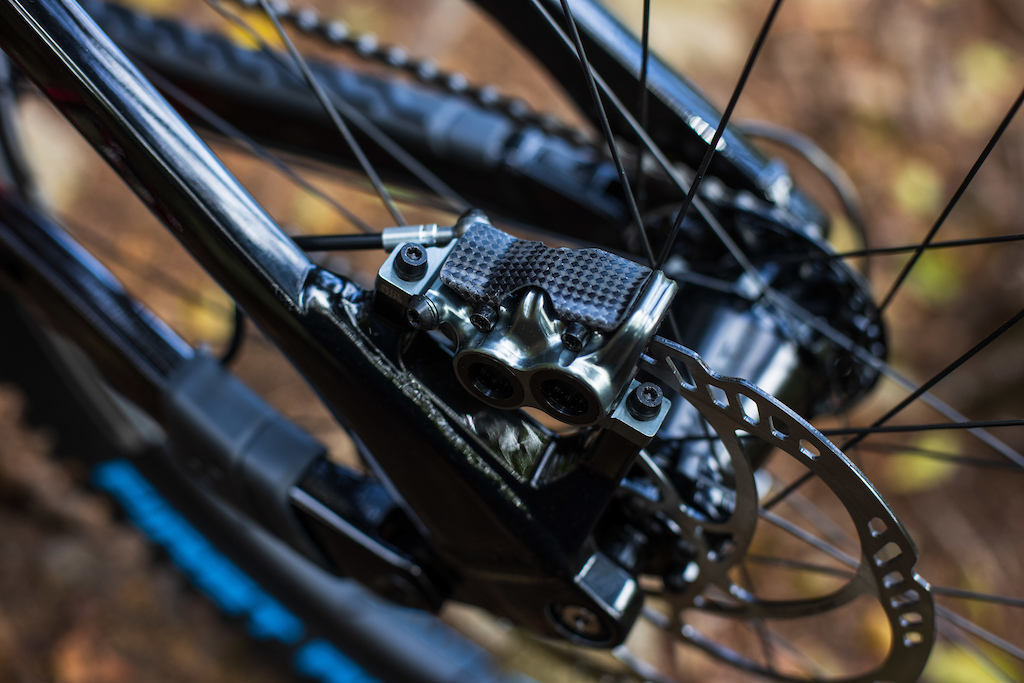 Brakes are Magura MT7 Racelines with 203mm rotors front and rear. There's also a neat formed composite brake protector to help stop the ingress of grit and mud into the caliper and keep the brakes consistent in sloppy conditions. 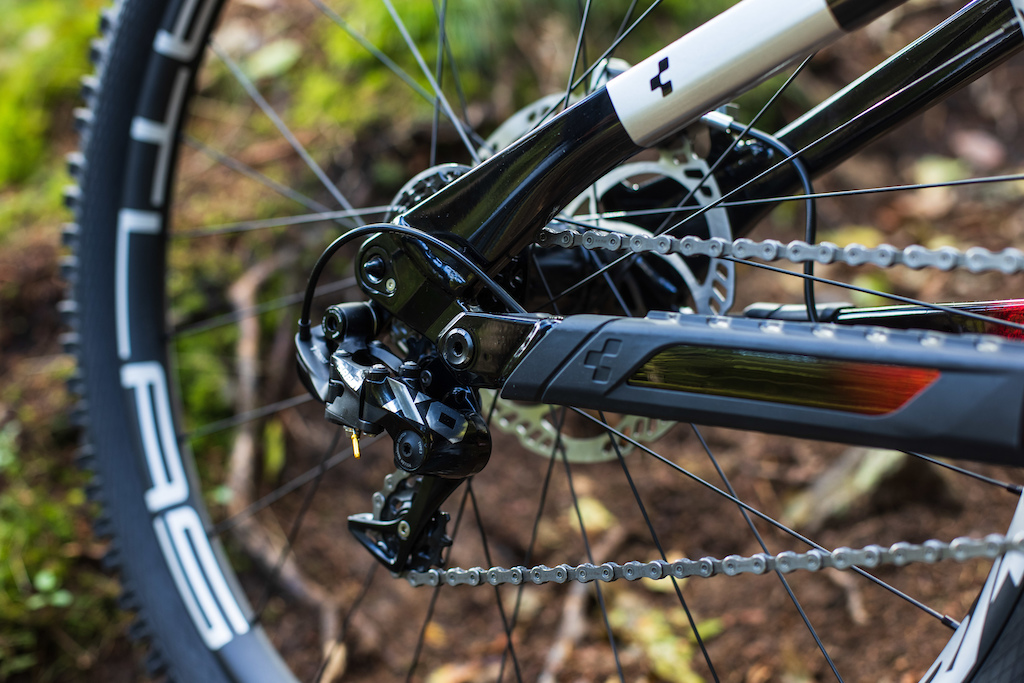 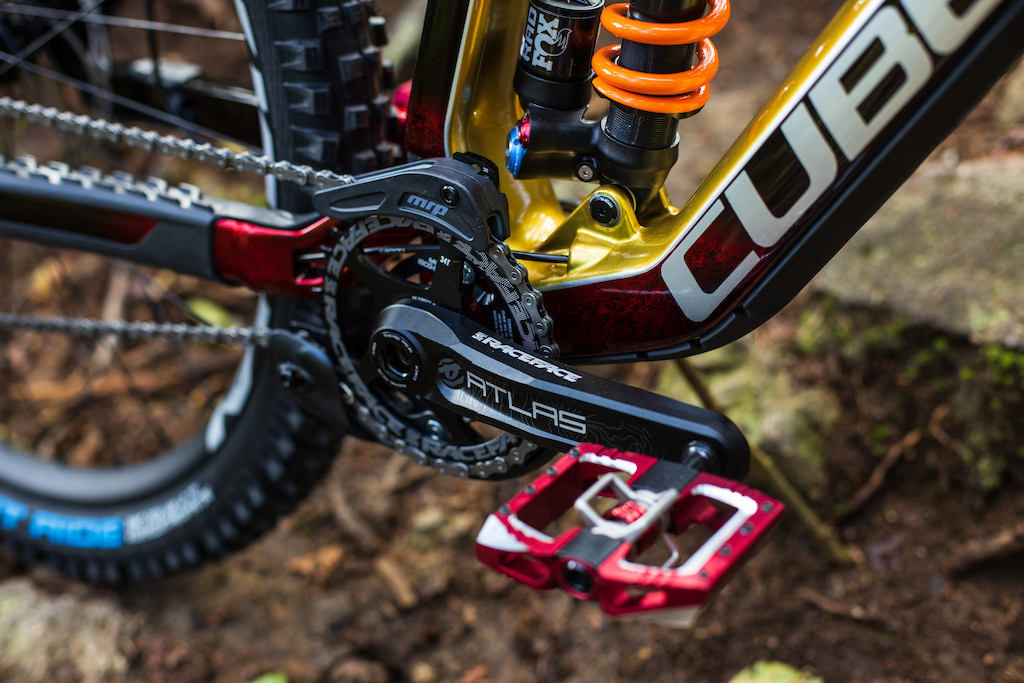 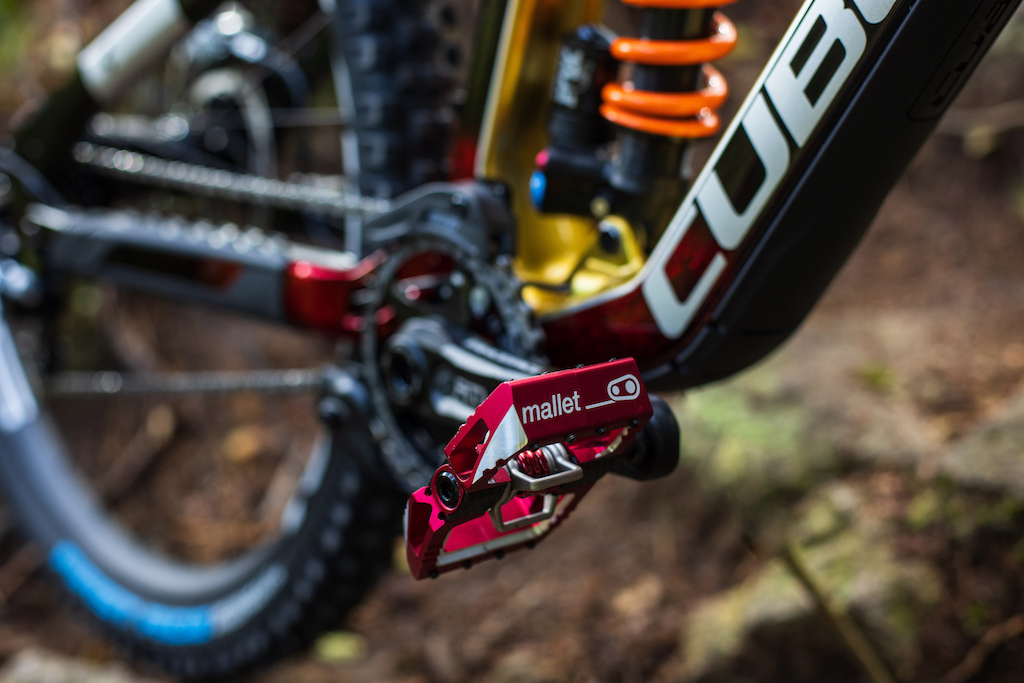 There's a mix of SRAM XO1 DH 7-speed gearing with Race Face Atlas aluminium cranks with a 34T chainring. A full MRP guide keeps the chain in check and helps deflect impacts. Max runs Crankbrothers Mallet DH clips with all the pins in place but only fairly modestly sticking out. 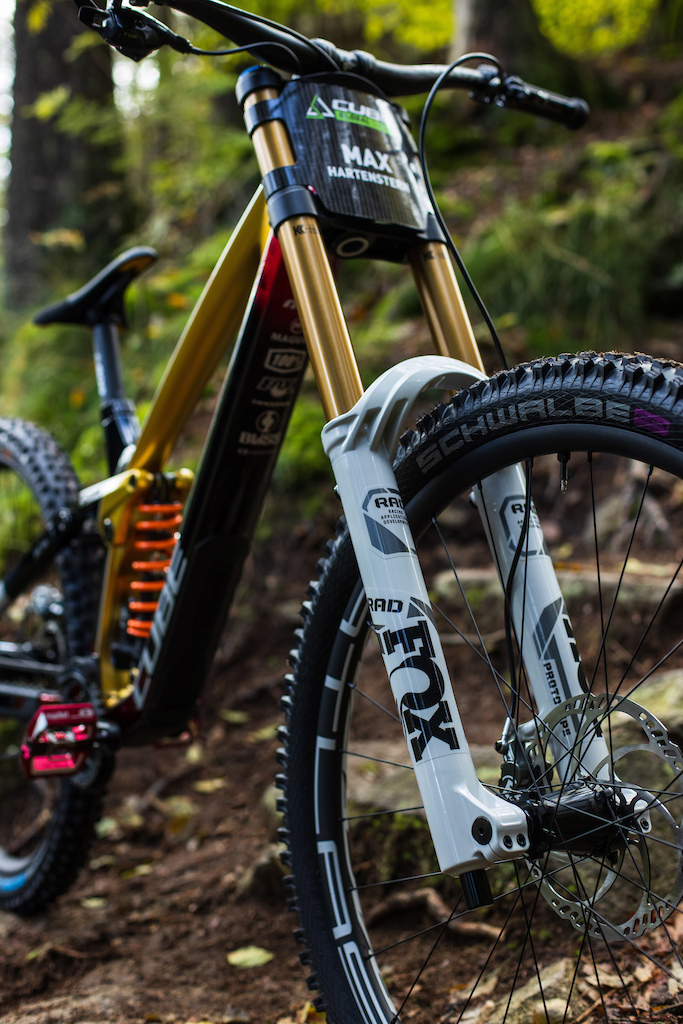 All clicks measure from fully closed, unless otherwise stated. 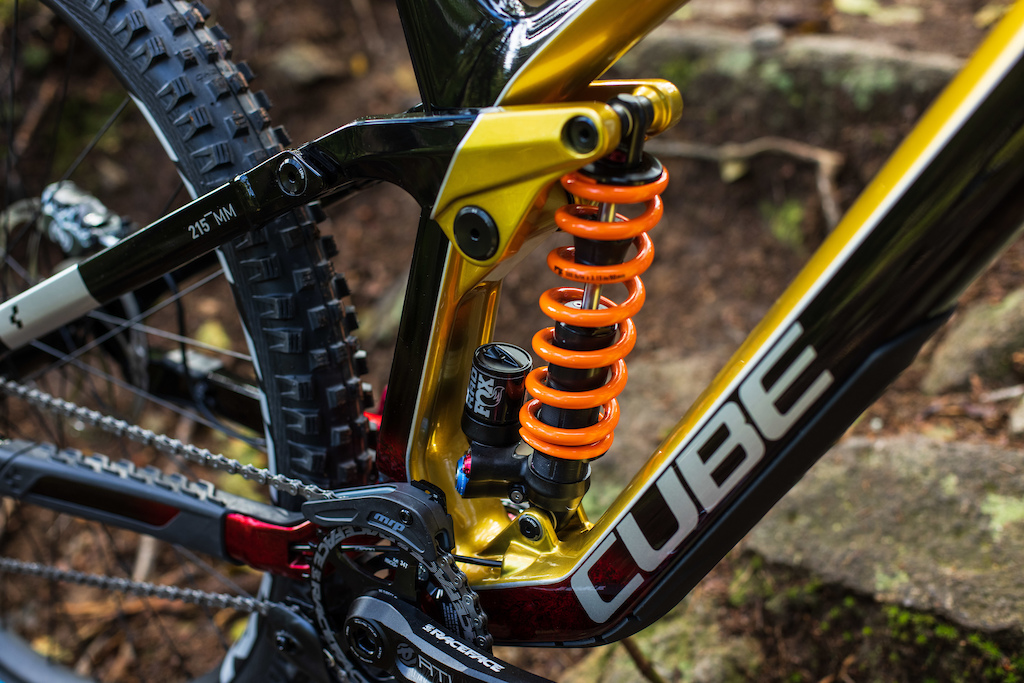 The new TWO15 HPC version is built around the imperial sized Fox shocks, namely the 241.3 x 76.2mm DHX2. That was done to take advantage of a slightly longer stroke in a shorter eye to eye than the metric equivalent, which would be a 250 x 75mm. That allowed Cube to design around a smaller shock package in the frame and lower the standover. Being sponsored by Fox suspension, Max is also on the RAD programme giving them access to setup, tuning and specialist parts generally before they are even released to the public. He's on the latest Fox 40 Factory in the Heritage Edition Battleship Grey colour. 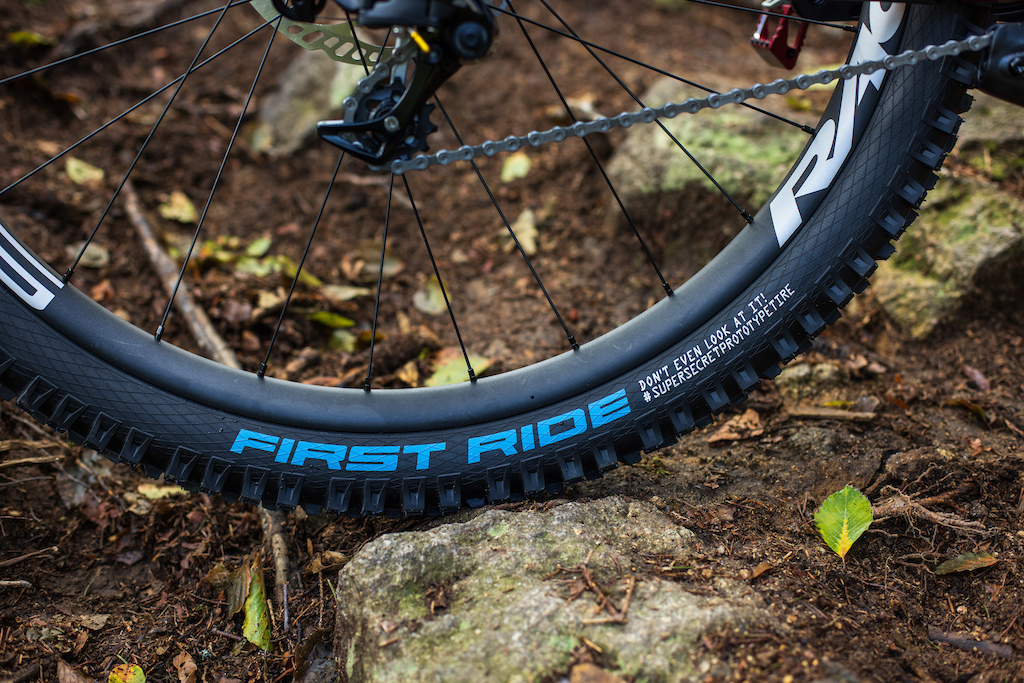 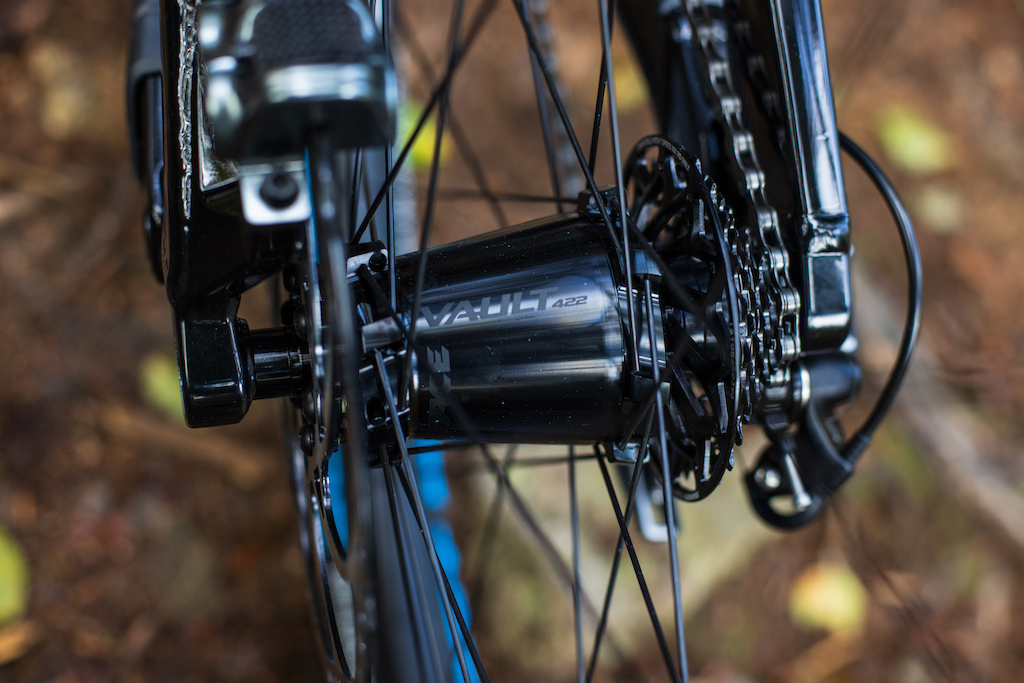 Max is on the Schwalbe First Ride programme and uses their Magic Mary 29 x 2.4 tyres with Super Downhill casings front and rear with an Ultra Soft compound in the front and Soft in the rear. There's also the addition of the Schwalbe Procore system in the rear tyre. Pressures are 24psi front and 26psi rear with 75psi in the Procore. Wheels are from Race Face with the Vault 422 hubs and Atlas aluminium rims. 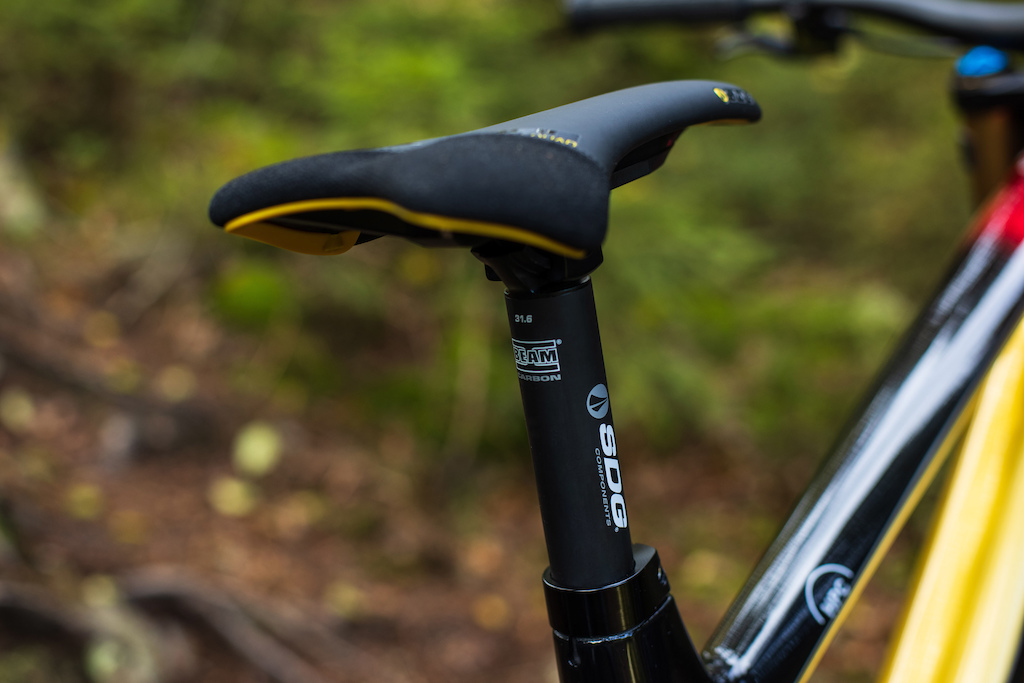 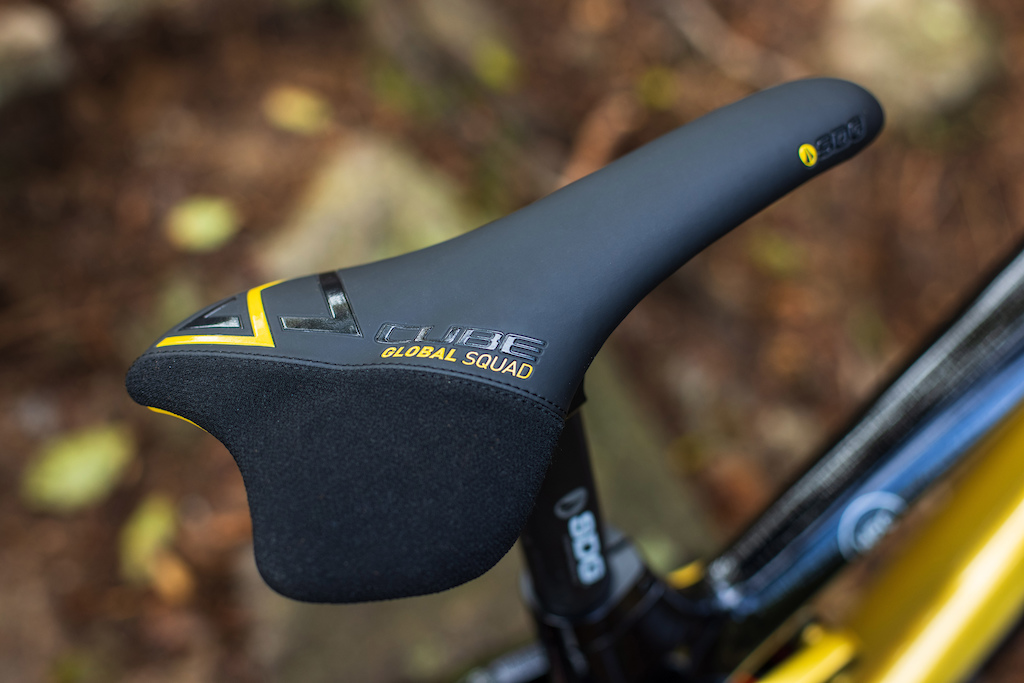 Seat and seat post are from SDG with the I-Beam system. Seat post is the carbon fibre version and the seat is a custom edition for the Cube Global Squad.

withdignityifnotalacrity (Oct 8, 2020 at 7:13)
Cube makes some clean frames, and look super nice with coil too!

lehott (Oct 8, 2020 at 19:45)
Yo dawg we heard you like measuring so we measurably measured the measurement, so you can measure while you measure

oldfaith (Oct 8, 2020 at 9:43)
It really depends on the arrangement of the squares, 6 squares have allot of potential including male genitalia.

jomacba (Oct 8, 2020 at 8:58)
Inperial sized shock for a shorter eye to eye and a longer stroke... The reason why metric was created was to increase the bushing overlap to create a more structurally sound architecture. Did cubes designed stop at page one of fox's product catalog? Because the Trunnion mount was the design solution around limited eye to eye measurements without sacrificing structural integrity. In fact, the design of this frame is a perfect example of when to use a trunnion mount. This also allows for a roller bearing pivot at a location that sees a large amount of rotation.
Great looking frame, but the shock choice, and associated design concept is inherently flawed.

mhoshal (Oct 8, 2020 at 11:26)
@jomacba Real world cycles makes eyelet needle bearings that do the same thing and they work great!!

jomacba (Oct 8, 2020 at 11:52)
@mhoshal: agree, but the reality is that is a bandaid for design constraints. Fox also makes an 8x30 roller bearing kit which work phenomenally, but was really created as an adaptation for the oppo-piggyback eyelet. That being said, this really isn't the main purpose behind my point, this is simply an additional observation. The real issue is the bushing overlap. As I stated the Trunnion mount is a solution to eye to eye constraints without limiting bushing overlap. Essentially the shorter the overlap, the larger the degree of torsional slack created. This increases friction, which then limits performance, as well as decreases bushing and contact point lifespan. As I said, it's an inherently flawed design

Mondbiker (Oct 8, 2020 at 12:31)
@jomacba: Except fox ones aren´t roller bearing but ball bearings which aren´t nearly as durable for this application and more than few people had issues with poor fit on them with all associated noises.

jomacba (Oct 8, 2020 at 13:58)
@Mondbiker: I believe fox has remedied this issue. I had an early set that creaked quite a bit. I was given another set from them to which I have had zero issues with. The original issue was not related to the bearings, it was the tolerance of the cups. That being said, with multiple widths between frame manufacturers, I don't see many solutions beyond a proprietary fitment.

jamesmjg (Oct 9, 2020 at 9:07)
Comments on here are terrible, what happened to seeing the positive in products rather than trying to slate them before they’re even been given a chance to prove themselves, all bikes are good all suspension platforms are good and they without a doubt out perform 90% of the halfwits who comment on forums and websites like this, if Remy, Phil Atwil and Max can ride these without issues what’s your excuse ?

Mac1987 (Oct 8, 2020 at 14:39)
But... but... but... but... Cubes were unfashionable old school unrideable Penny-farthings that would never be used by knowledgeable people, let alone win races or heavens forbid championships??!!

SupraKZ (Oct 8, 2020 at 8:36)
Alright they got the looks down. Hopefully this isn't made out of paper like the previous gen

mucklark69 (Oct 9, 2020 at 3:29)
Made in Vietnam in Factories with no Worker's rights. I always wondered how Cube where managing to under cut the prices of other Brands who also produce in Vietnam ....

HundredPerCent (Oct 8, 2020 at 14:29)
This Bike Looks so good except for the orange spring. And the White lowers. The Paint of that frame is fire

pic2urethis (Oct 9, 2020 at 5:13)
Anyone want to bet what competitor they ripped their concept from?

jomacba (Oct 8, 2020 at 10:05)
@stumphumper92: Fair enough. Fox still offers that. I have the battleship grey. I was hesitant at first, but they look better IRL. That being said, I think fox's goal was to make them look dated, or "Heritage" as they call it.