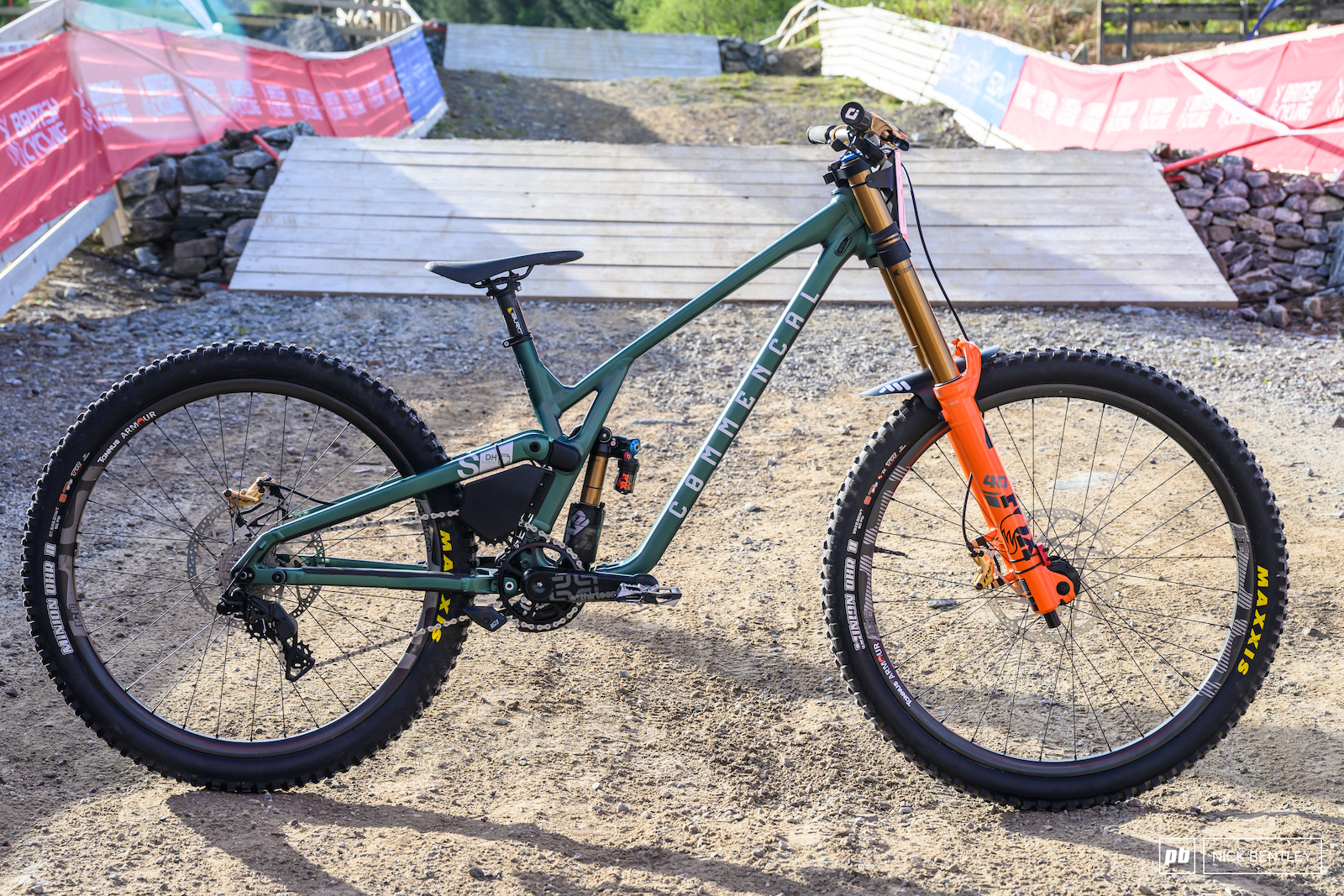 This is the not-yet-available V5 of the legendary Commencal Supreme that has been pretty dominant in World Cup racing over recent years. The new V5 model uses new kinematics around its virtual high pivot design and a beautiful 6 bar linkage that has some stunning machined aluminium parts.

The idler has moved slightly higher with a 3D-printed guard on Mille's bike, and there is also some more 3D printing on the cable clamps on the non-drive side of the bike too. Commencal says that the result of the changes they have made in V5 have significantly improved the balance, shock absorption and overall liveliness of the bike. 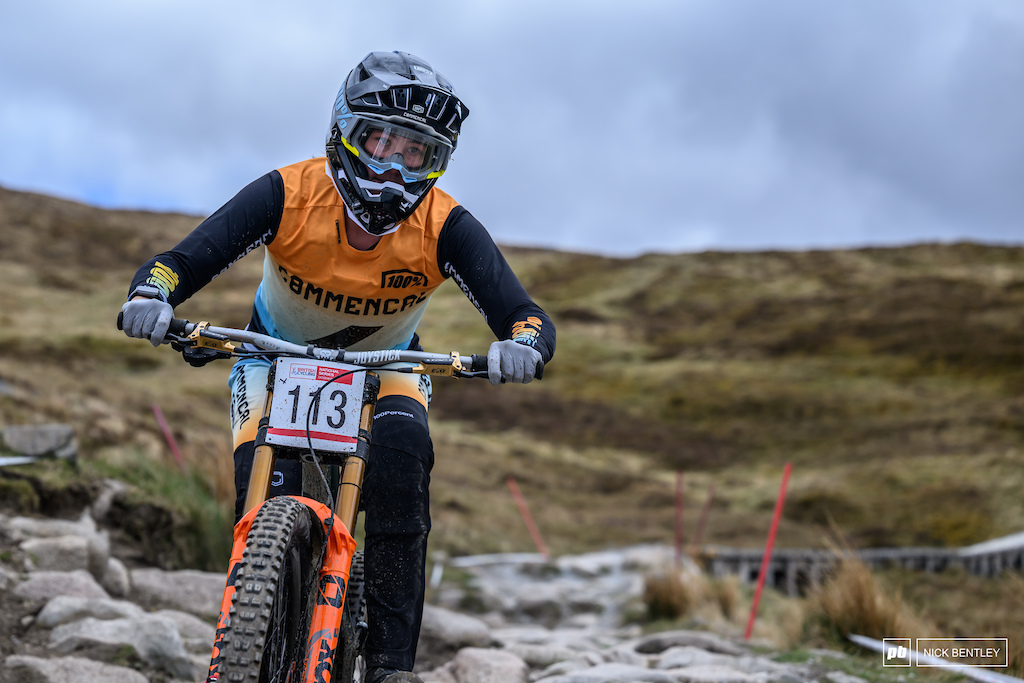 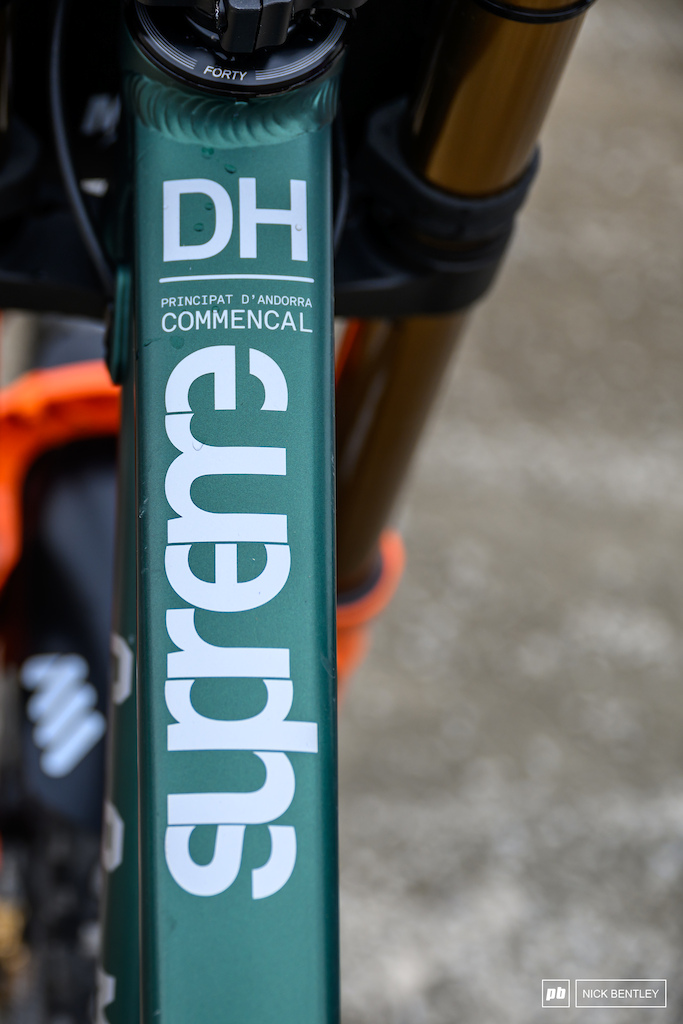 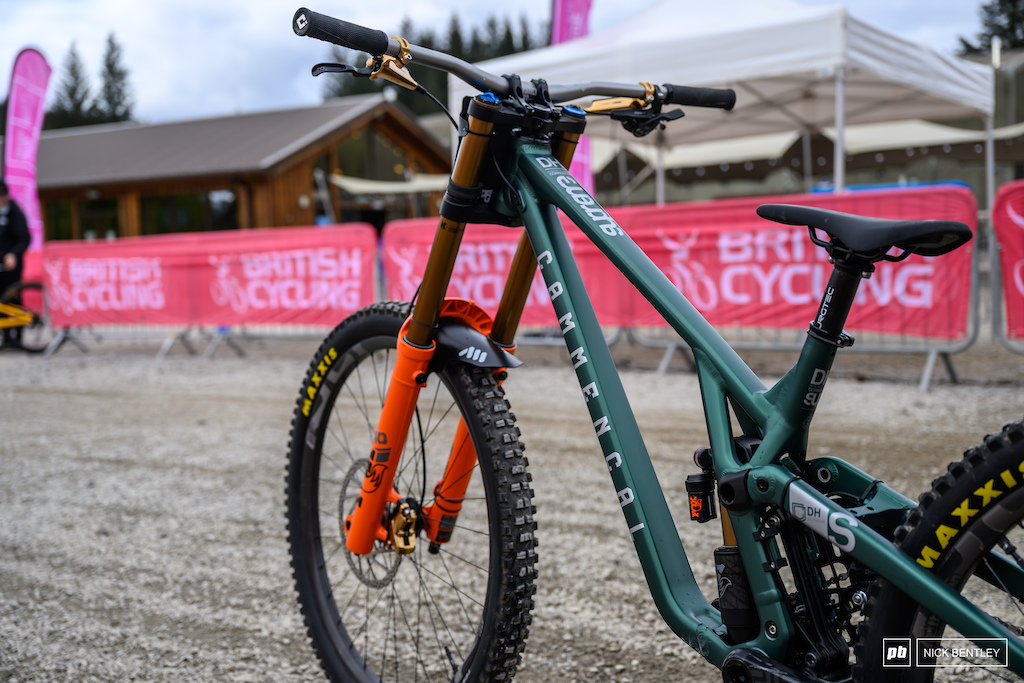 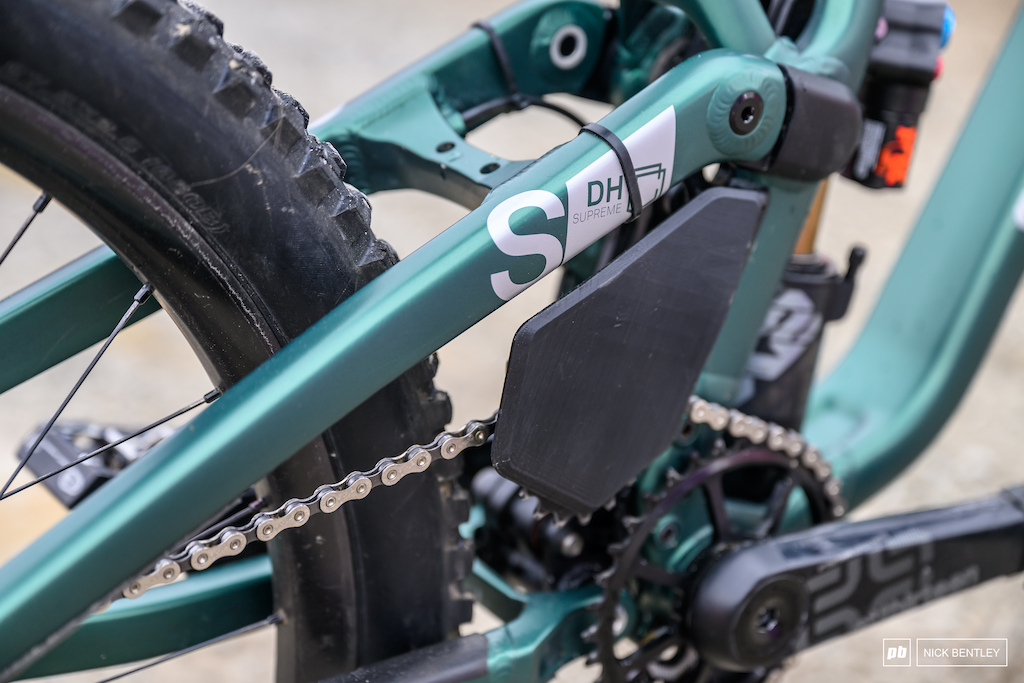 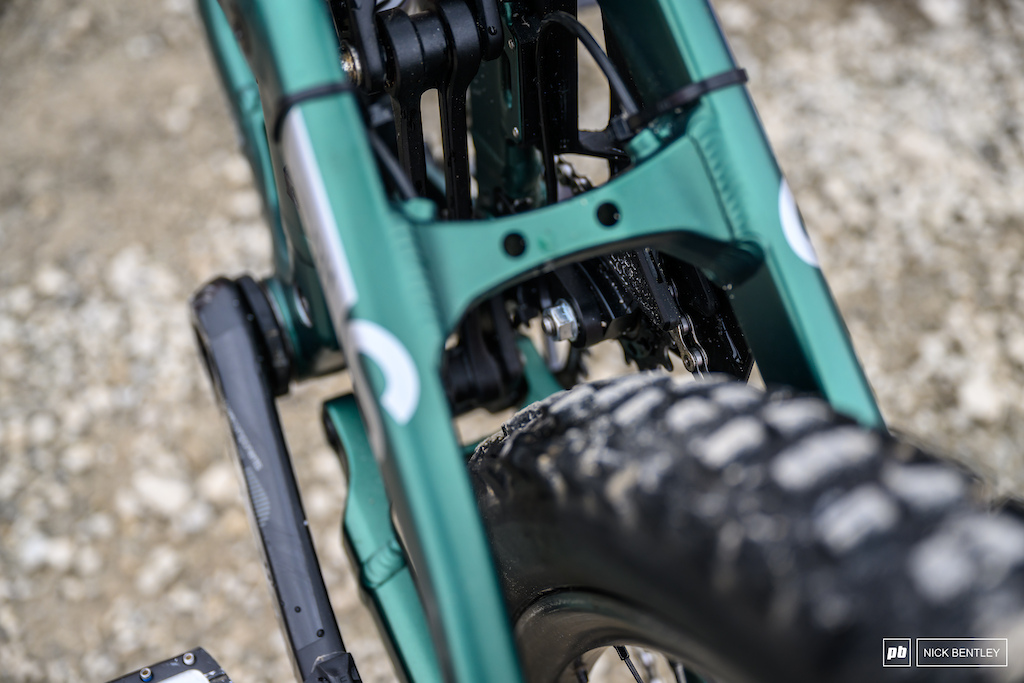 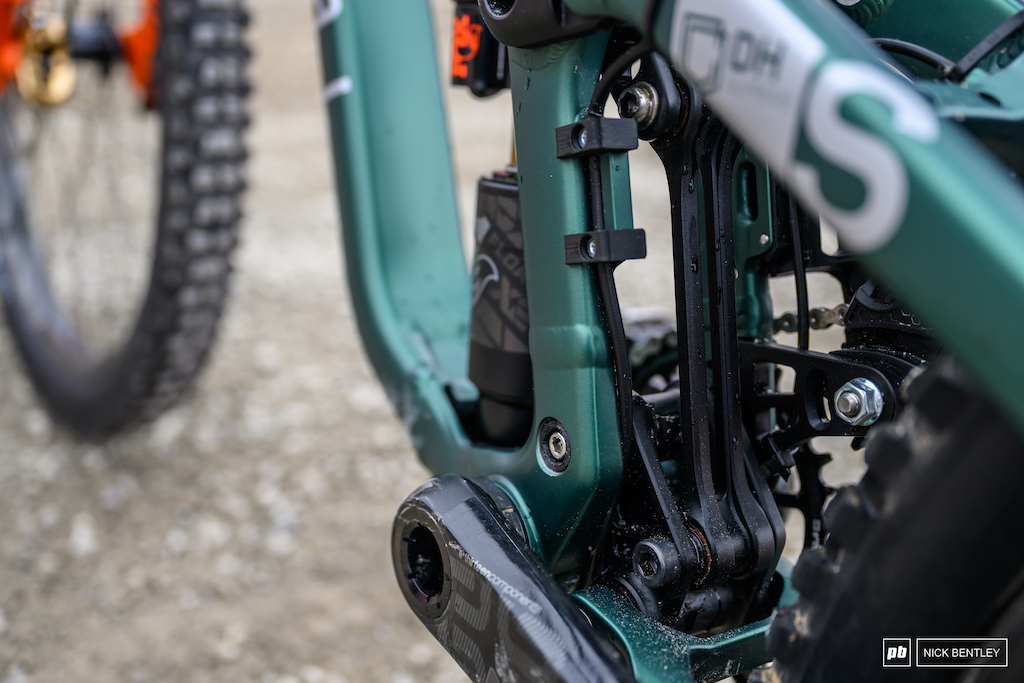 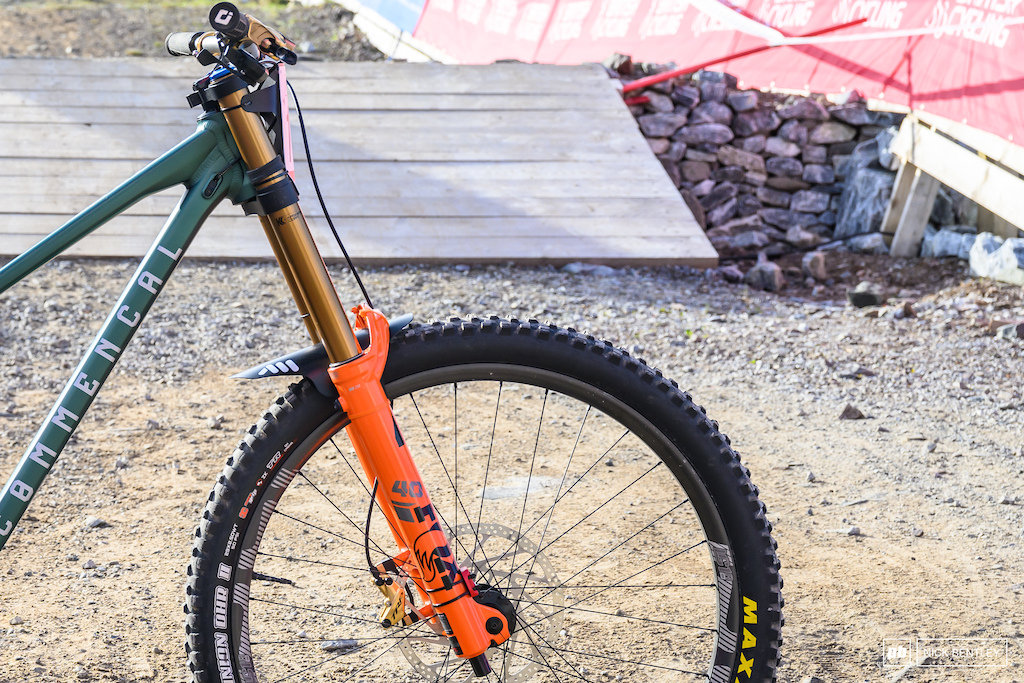 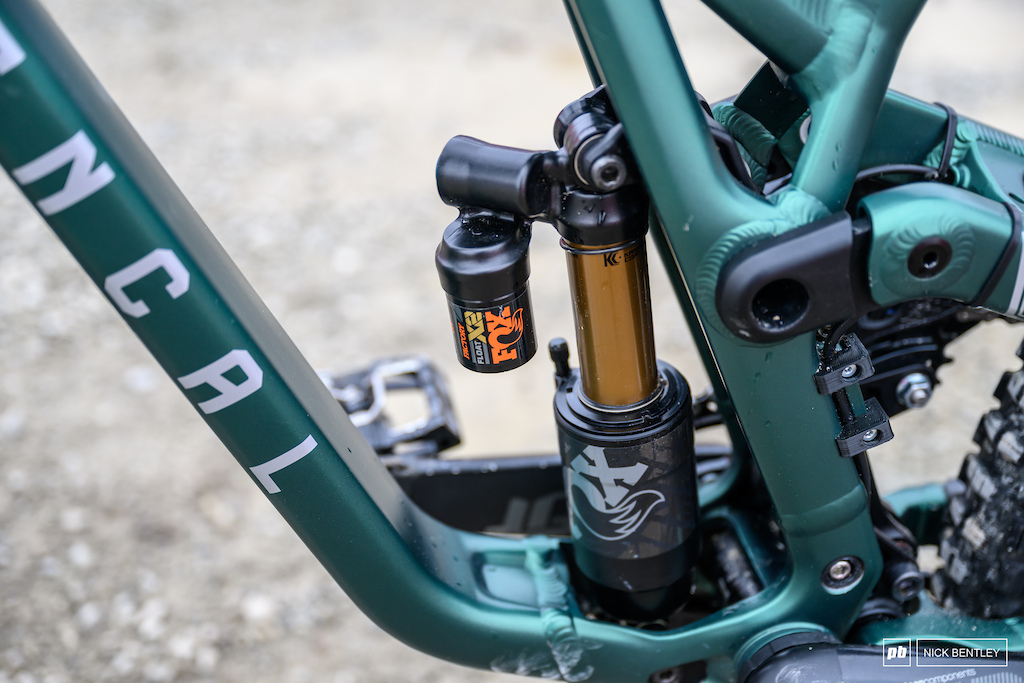 Mille is running the ever-popular Fox 40 factory fork up front set to run a 29" wheel. Inside the fork, there are 3 tokens and 74psi of air. In the rear, it's an air shock for Mille with a DHX2 250x75mm metric shock fitted with 2 tokens and 225-235psi of air depending on the track.

With regards to rebound, Mille runs her suspension pretty soft and it's also worth noting that the X2 has been specifically tuned for her by the team at Fox. 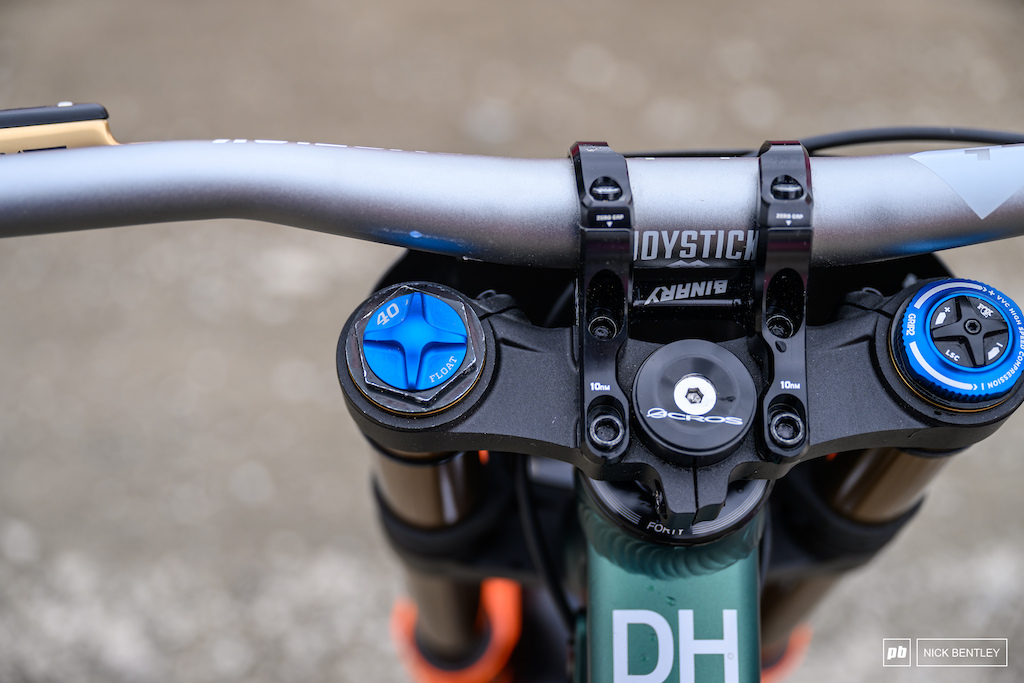 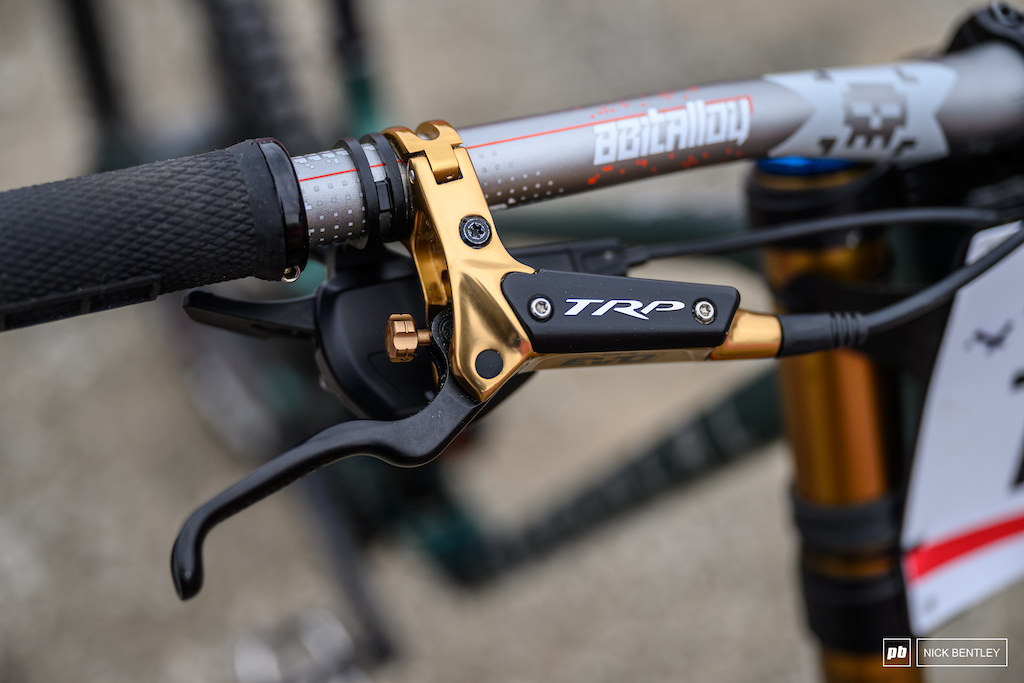 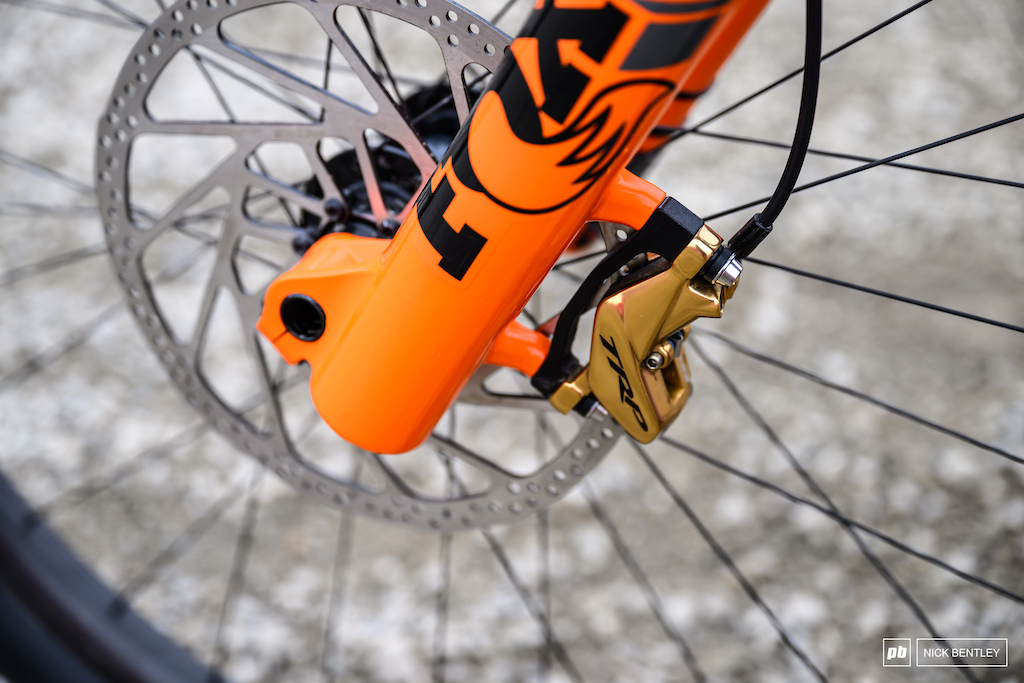 Controls wise it's a Joystick handlebar and stem for Mille, with her bars cut to 760mm. The Joystick 8-bit ally handlebar has 20mm of rise with a 9 degree back sweep and a 6-degree upsweep. The bars are mounted to the Fox 40's top crown with a direct mount Joystick Binary stem.

For brakes, Mille is using the Evo DH model from TRP. If the 4 pot TRP brakes were not powerful enough on their own they are matched with some huge TRP 223mm 2.3mm thick rotors that are sure to bring you to a stop pretty fast. 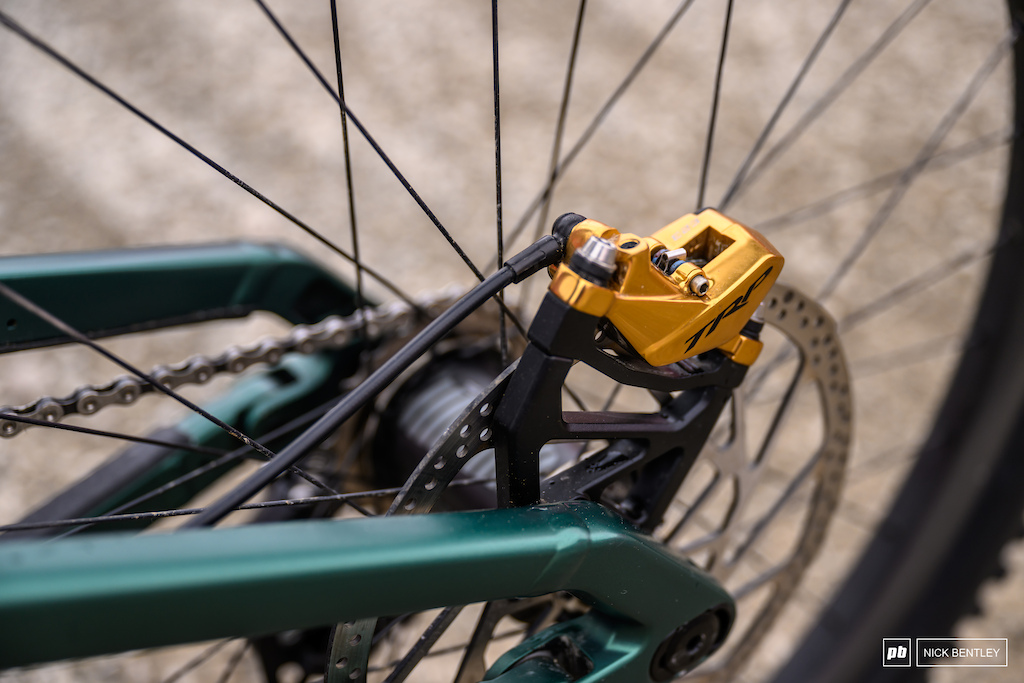 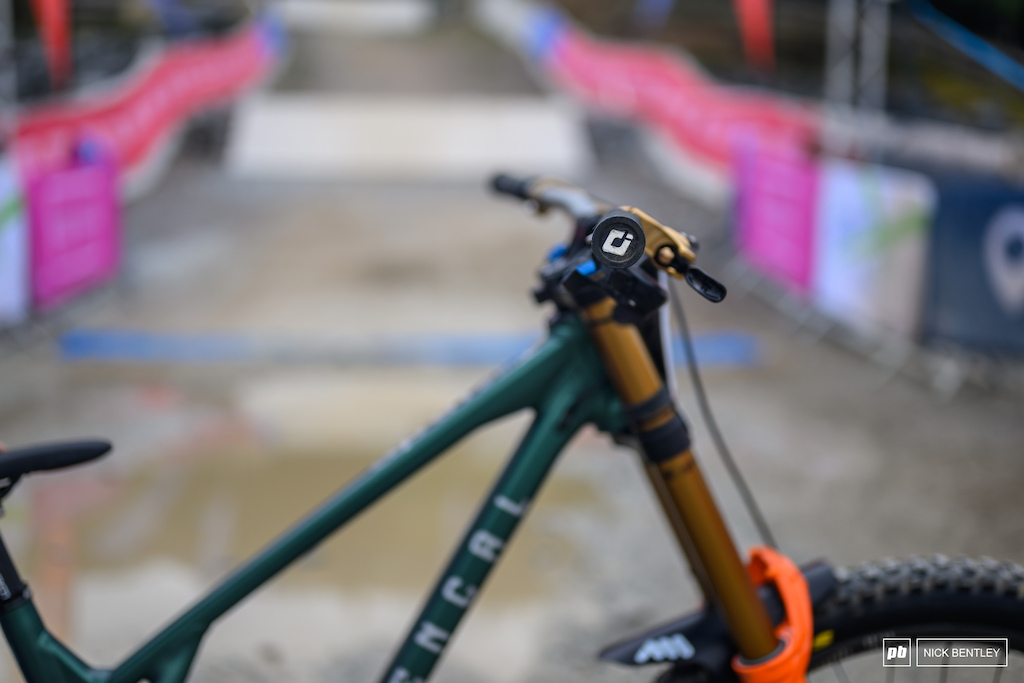 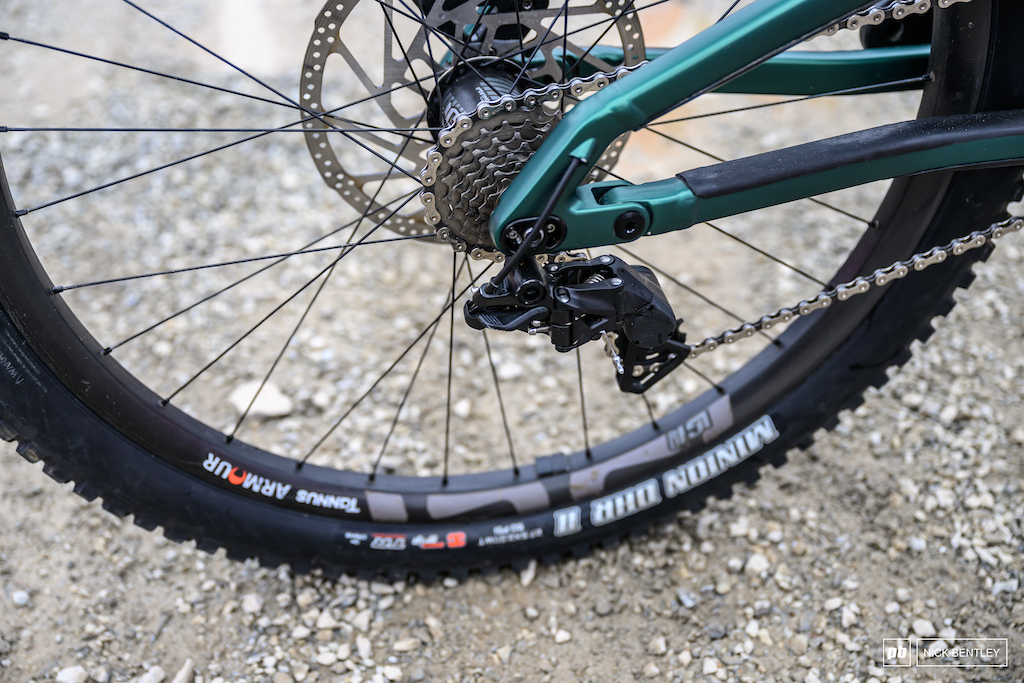 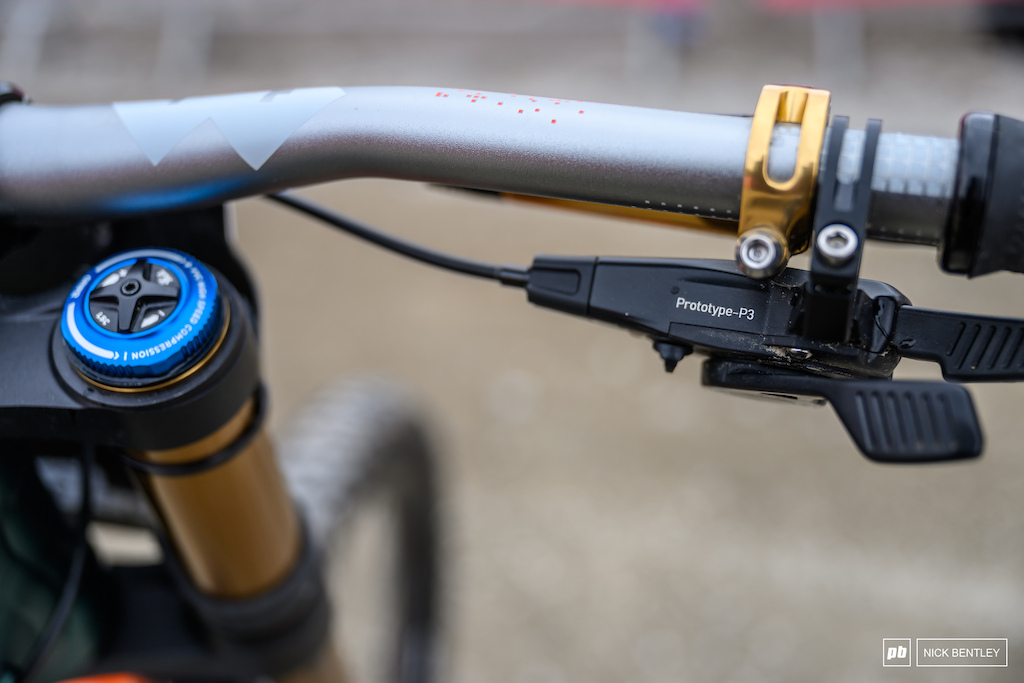 The drivetrain is taken care of by a mix of TRP parts with their DH Gen2 7 speed derailleur and shifter fitted with e*thirteen supplying the 7sp cassette. e*thirteen also provides the cranks with Mille using their LG1 Race carbon cranks that are 165mm long with a direct mount E*thirteen 32T chainring fitted. Like the majority of riders racing at the World Cup who run clipped in, Mille uses Crankbrother DH mallet pedals. 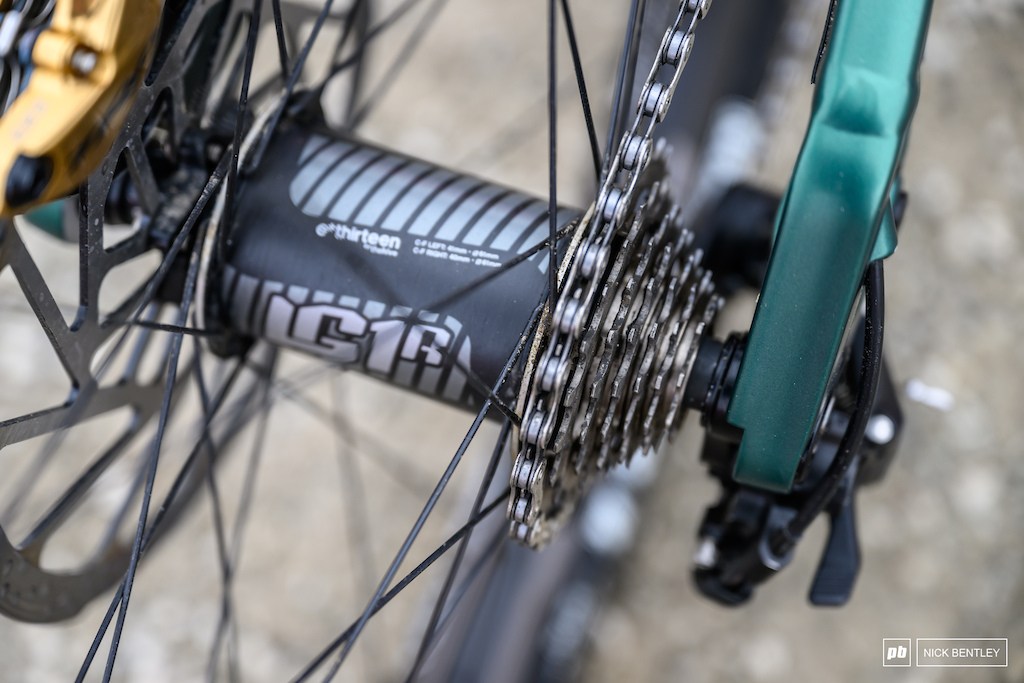 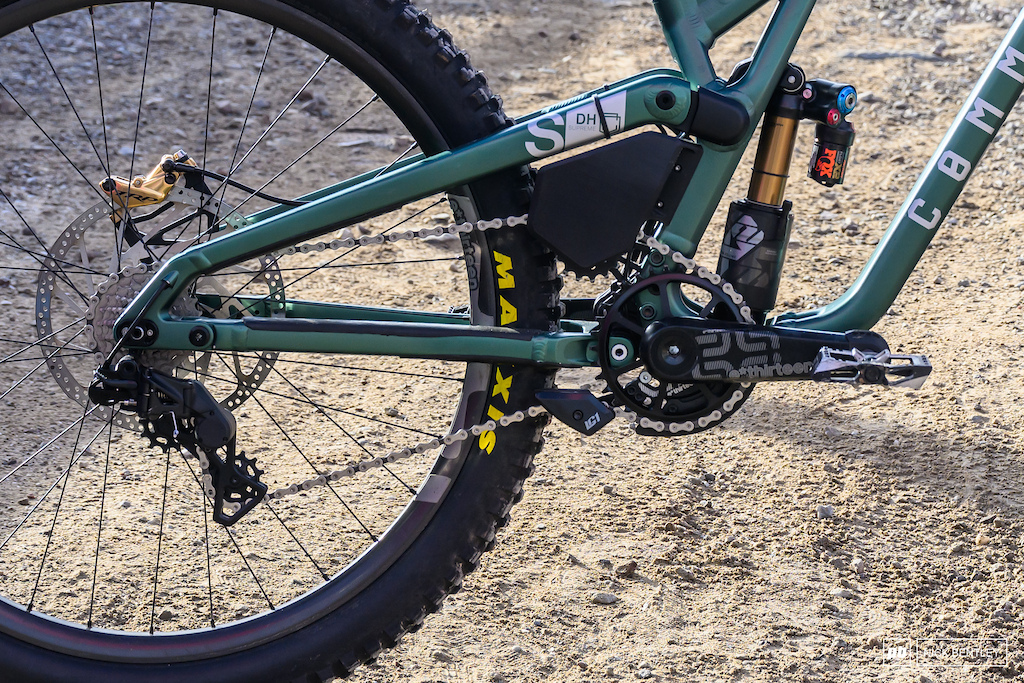 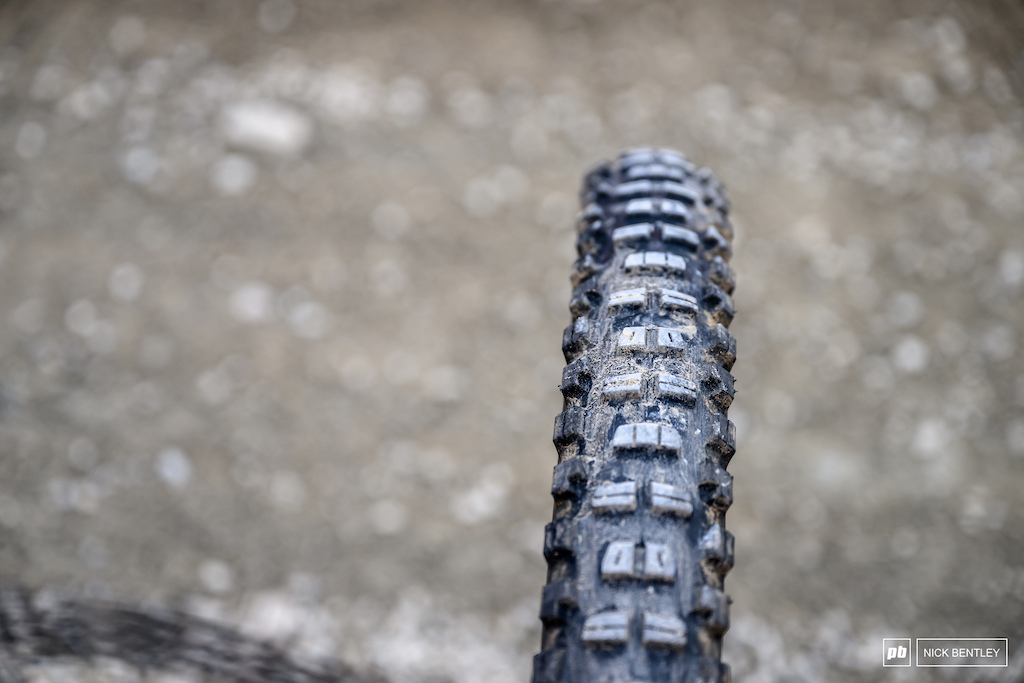 Mille runs Maxxis DHRII 2.5" inch wide tires pretty much all the time as her bike is set up mullet. There is a 29" on the front and a 27.5" on the rear. Inside the tire's there is a set of Tannus Armour inserts and Joe's No Flats Podium sealant for race day then swapping to Joe's No Flats Race sealant for training. Interestingly Mille's rear tire also has wheel weights fitted to the E*thirteen LG1 Race carbon DH 32h 30mm wide rims to get them perfectly balanced with the weight of the valve and the inserts. The rims are laced to E*thirteen LG1 hubs. 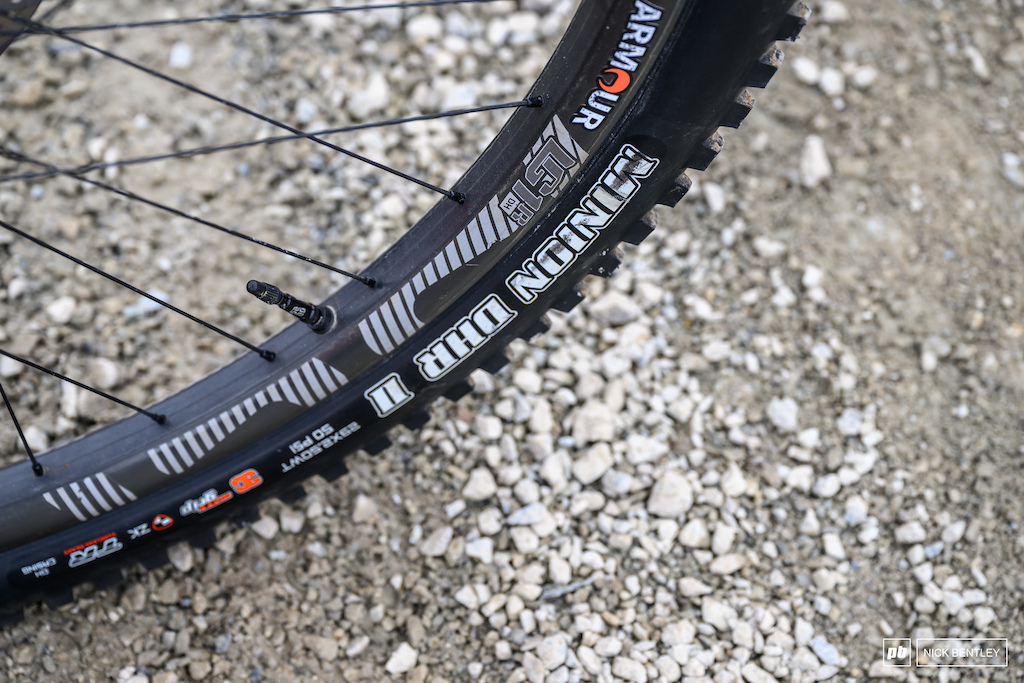 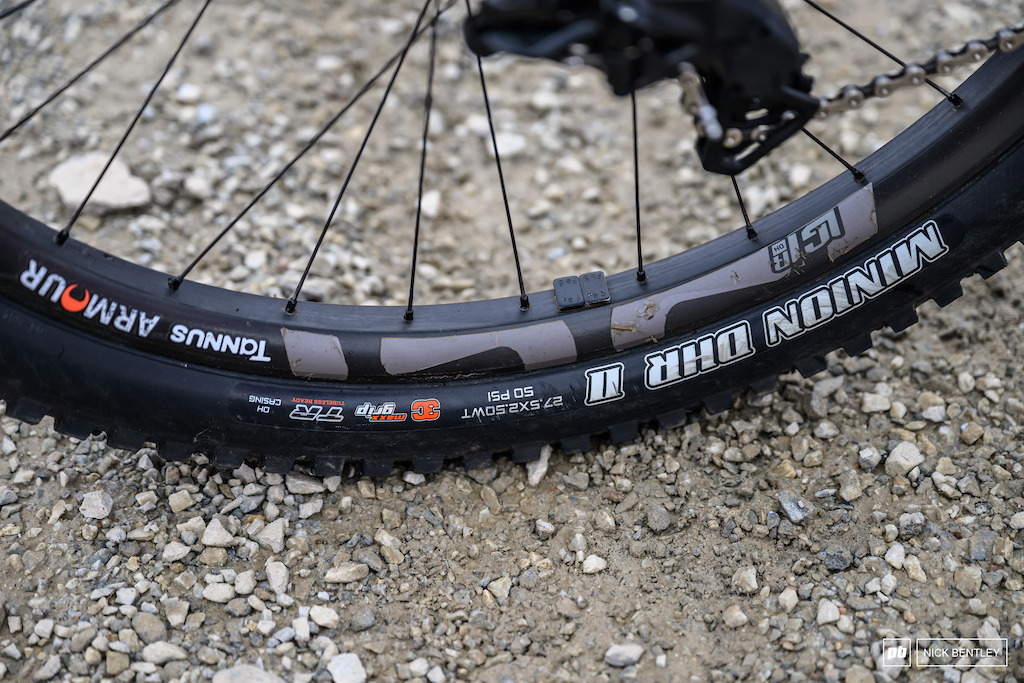 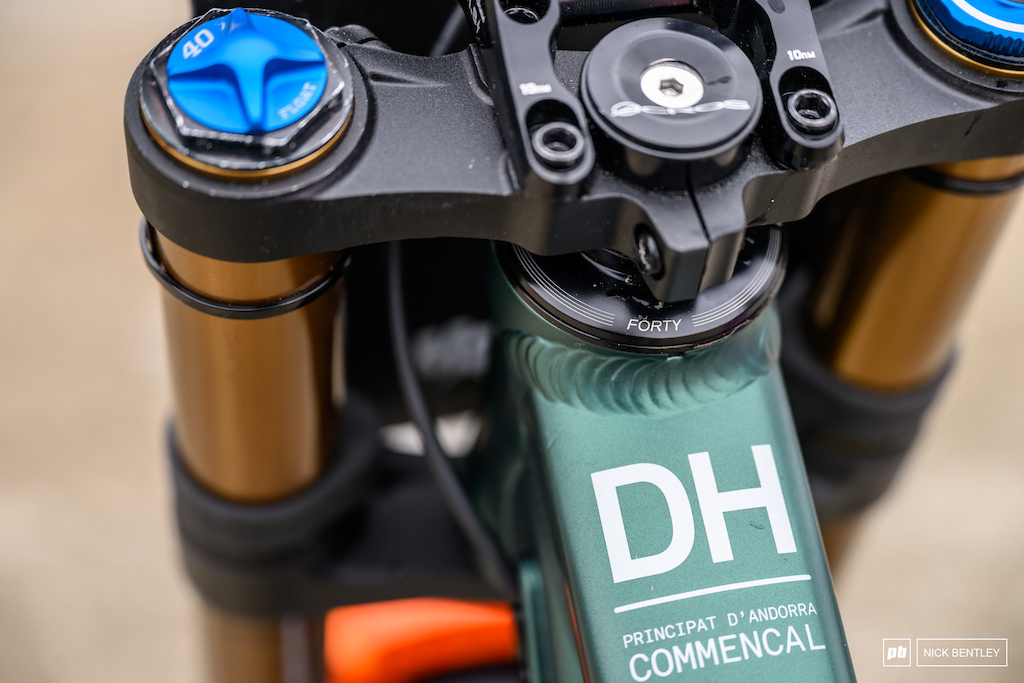 Right now Mille is running a Cane Creek Forty headset but the team will swap in a Works components reach adjust headset depending on the track. 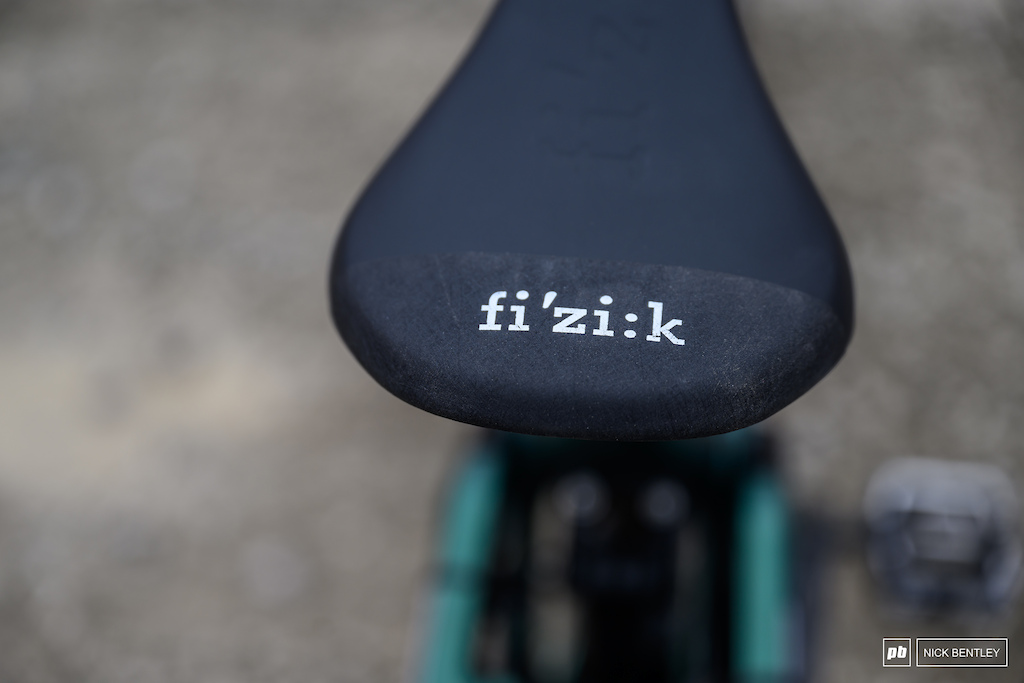 Truly a masterpiece of an article written minutes before deadline.

Davidemartintoni (May 12, 2022 at 12:11)
Is it me or the head tube angle seems steeper than previous Supreme version?

lepigpen (May 12, 2022 at 13:08)
I'll keep saying it in every new Supreme article, I love the oversized chain guide/guard. Looks like a sci-fi space fighter panel. I don't know why such a small, borderline unnecessary part tickles me so much...

onawalk (May 12, 2022 at 13:23)
Yep, with ya.
Willing to bet it’s a twofold design,
Allows them to tweak the idler position without too much reveal, and makes us want to know what’s going on under there…

BiNARYBiKE (May 12, 2022 at 13:46)
So interesting to hear you say that. I think it looks horrible as almost ruins the whole frame for me.

lepigpen (May 12, 2022 at 14:04)
@BiNARYBiKE: Well I presume it's a simple removable piece so bit of hyperbole to say it ruins the whole frame appearance. I love hiding complex things and simplifying appearances.

What's your opinion on the modern Scott Sparks?

SIZ (May 12, 2022 at 17:46)
@lepigpen: The Scott sparks have been done very elegantly. This looks like they cut out an icecream lid and whacked it in there.

Crankhed (May 12, 2022 at 20:18)
Am I the only one that was briefly (but very) confused by the part about the Joystick cockpit ?
That thing just looks Fast
I don’t think ive ever seen a Furious I didn’t like they allways look lean n mean and kinda stealthy especially the SS setups

eswebster (May 12, 2022 at 13:23)
Do I need to get better to feel the weight of a valve stem on my wheels, or are we picking nits a bit much here and just trying to add more components to our bikes?

TEAM-ROBOT (May 12, 2022 at 16:20)
Probably unbalanced wheels are more annoying when you're hitting motorway jumps at a million mph at Fort Bill vs. your average trail ride

MattP76 (May 12, 2022 at 13:39)
Starting to wonder what the point is in having a back end on a bike. The back wheel is now a problem, the rear suspension is a problem, gears are a problem. Let's get rid of the whole back end and race unicycles. No back end, no issues!

tadgercat (May 13, 2022 at 17:40)
Appreciate them letting the high school interns a chance to post articles.

styriabeef (May 12, 2022 at 12:31)
First the cube, now this. It's something about the proportions Dh bikes maybe getting faster and faster if they are solely purpose built machines, but these bikes look hideous to me. I don't ride DH anymore, just am a fan. Whatever works, I guess. Still...