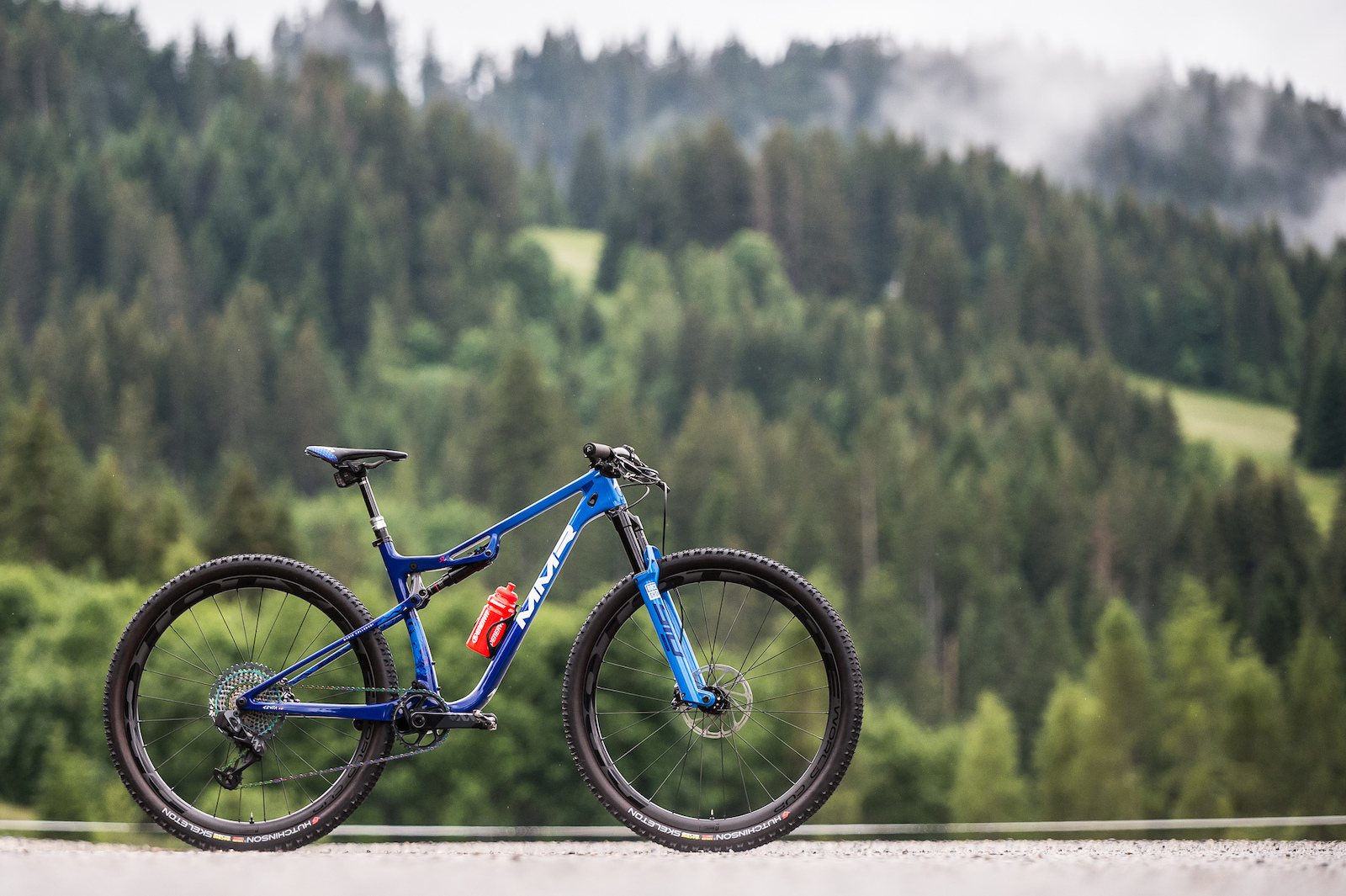 BIKE CHECK
Nadir Collendani's
MMR Kenta
Photography by MMR
MMR may not be the biggest name brand on the World Cup circuit but it has enjoyed its fair share of success in the Olympics over the years. It made its first appearance in 2012 through Josemi Pérez then tasted medal success at the following games with Carlos Coloma claiming bronze on its Rakish SL hardtail in Rio.

Following the announcement of the Italian team, MMR's hopes for success in Tokyo in 2021 will lie on the shoulders of Nadir Colledani. Colledani has been steadily improving all year with an18th, a 12th and then a 10th place finish in Les Gets last weekend. He's clearly building form towards the Olympics in July and will be tackling the course on this custom bike provided by MMR. Let's get into all the details. 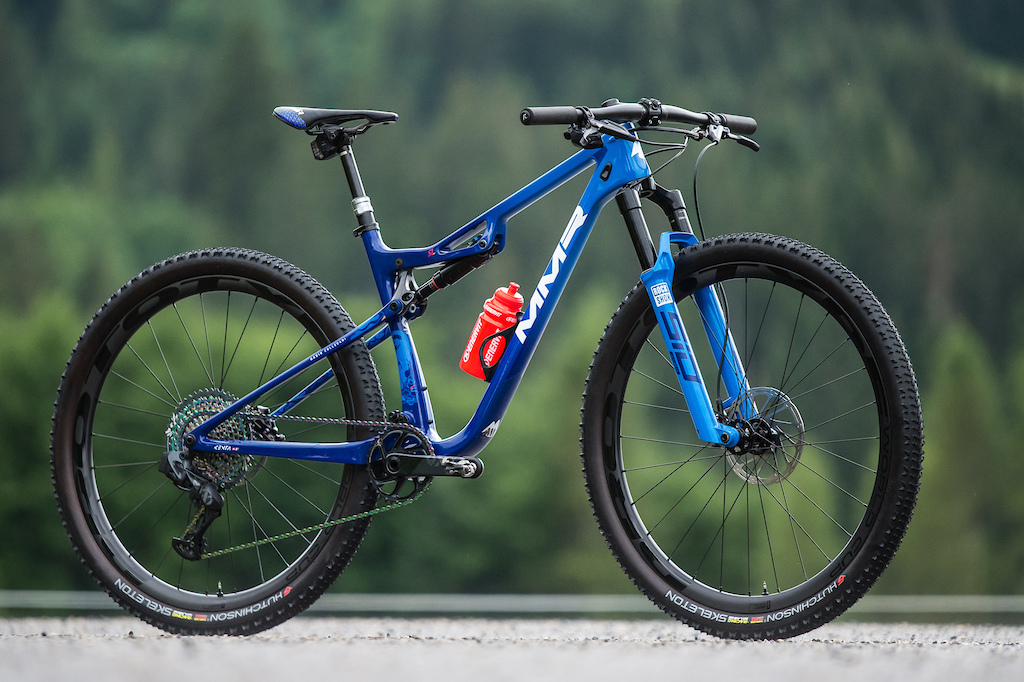 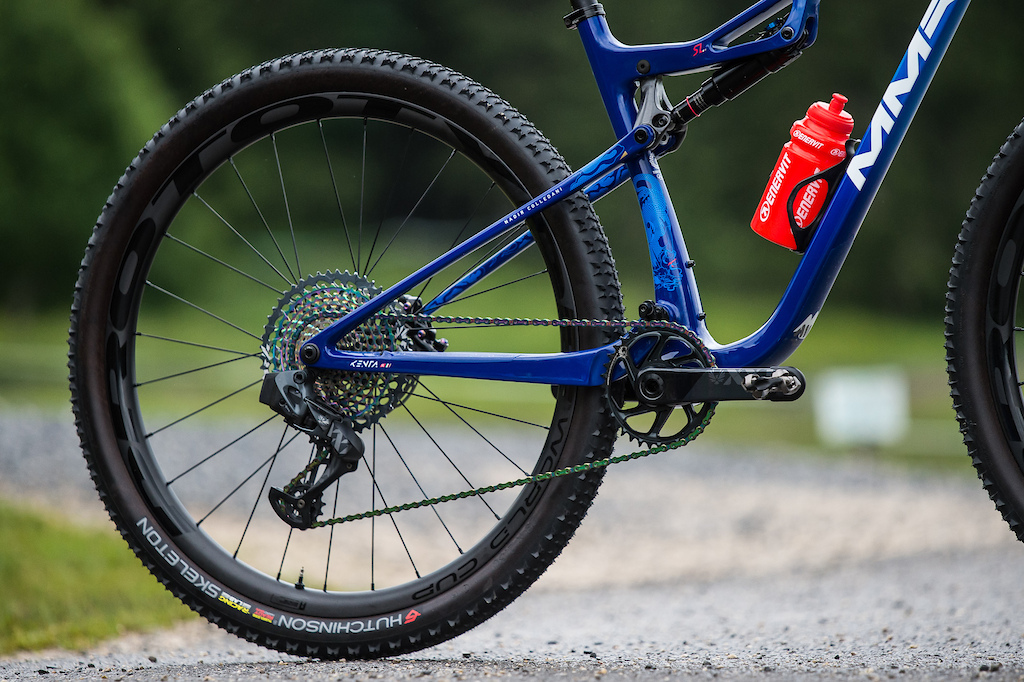 The protoype Kenta uses a single pivot with flex stays to manage its 107mm of travel. There's also a super-minimal guide to stop the chain from dropping. 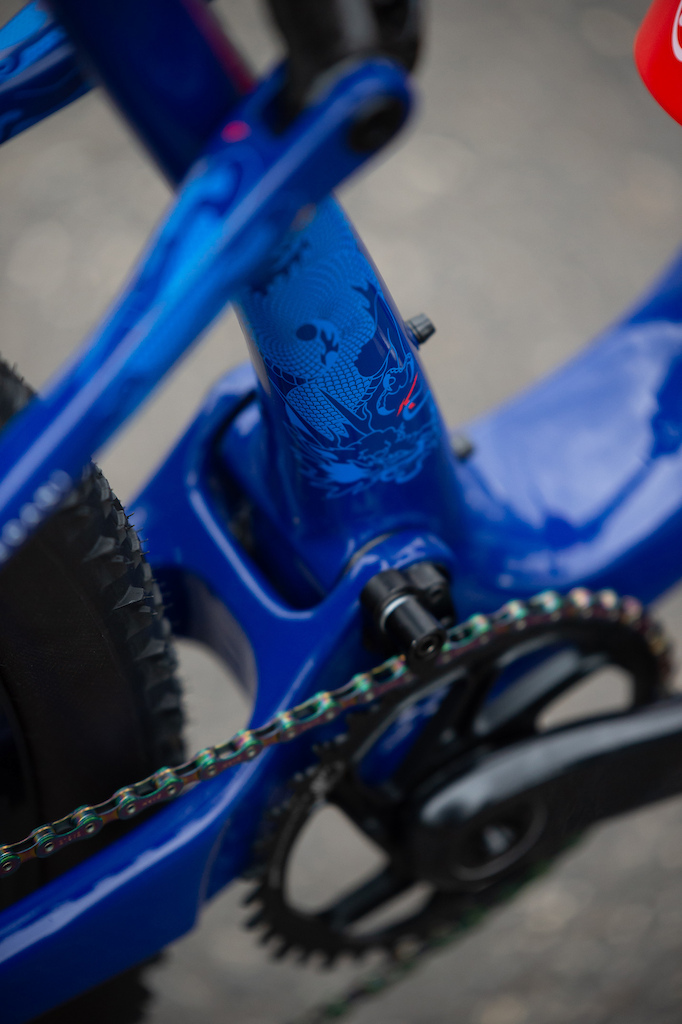 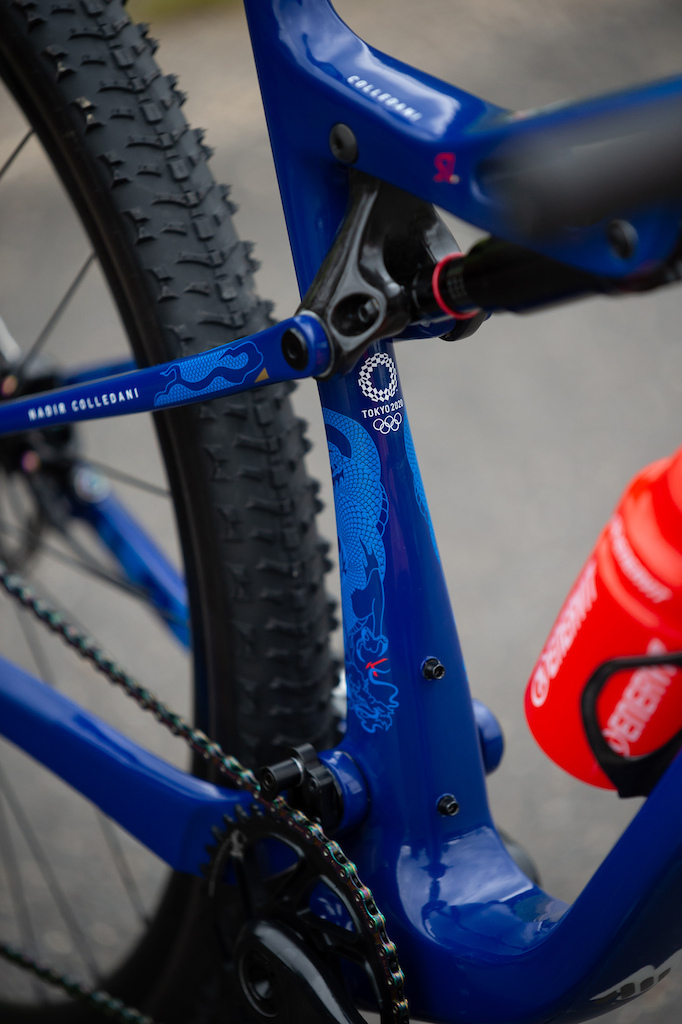 Alongside the Italian blue, there are dragon details to commemorate the Games' host country. 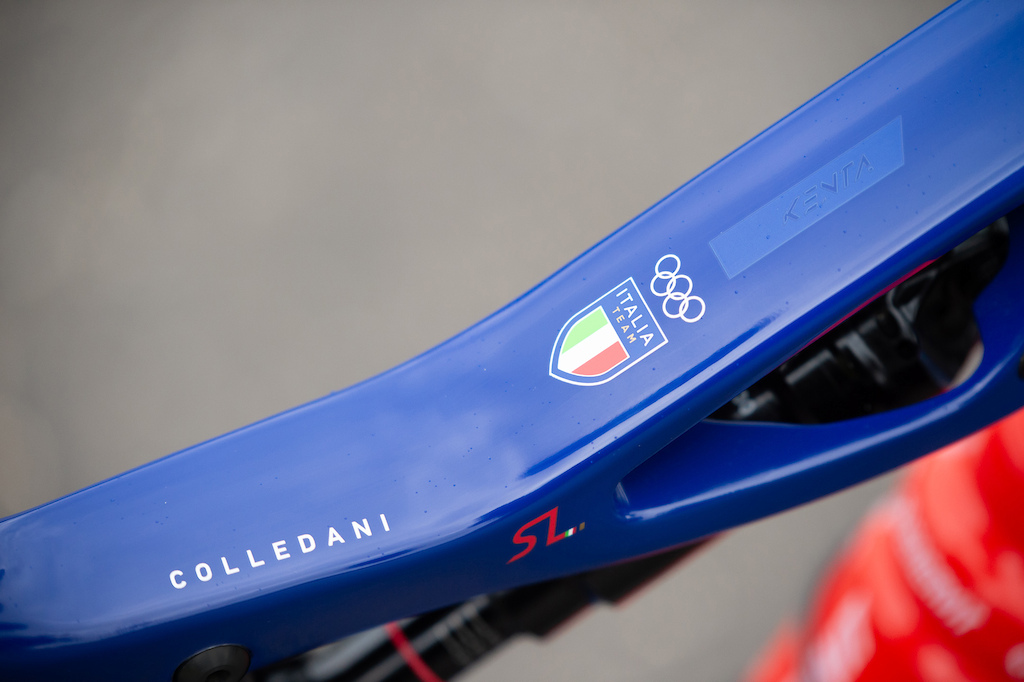 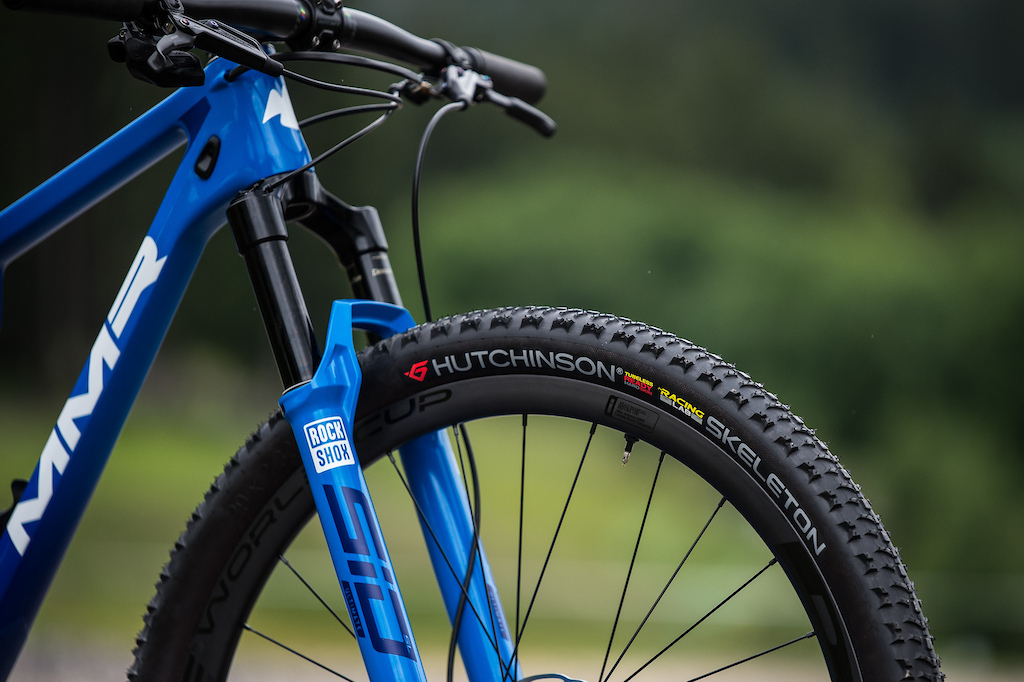 The 110mm travel RockShox SID didn't need any customization thanks to its stock blue. Colledani's Ritchey bars are mounted upside down to provide a lower, more forward and more aero position. 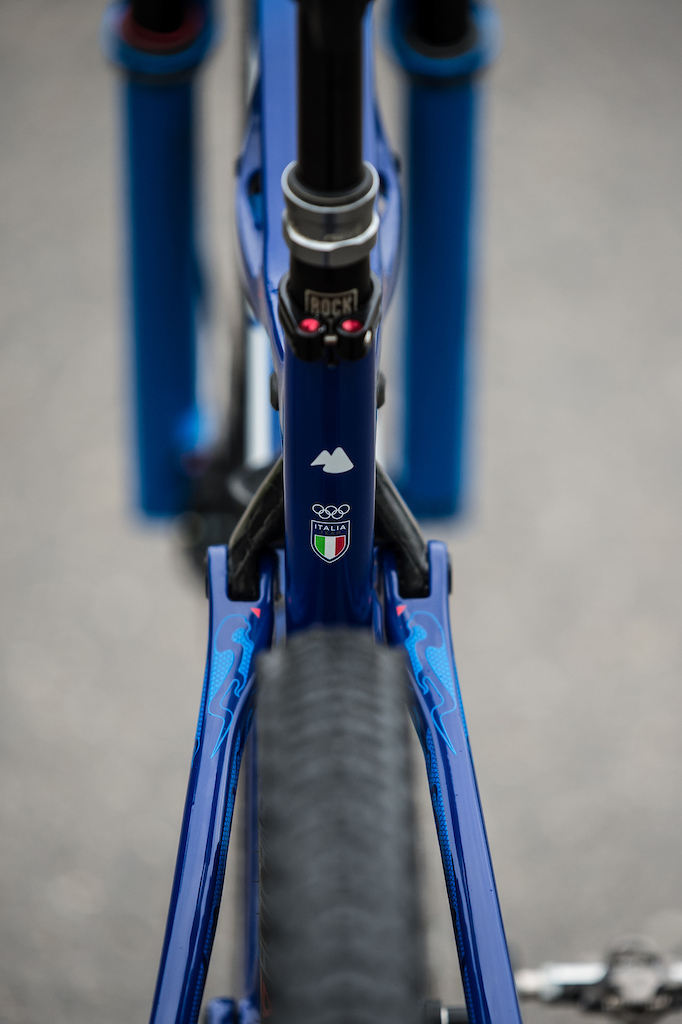 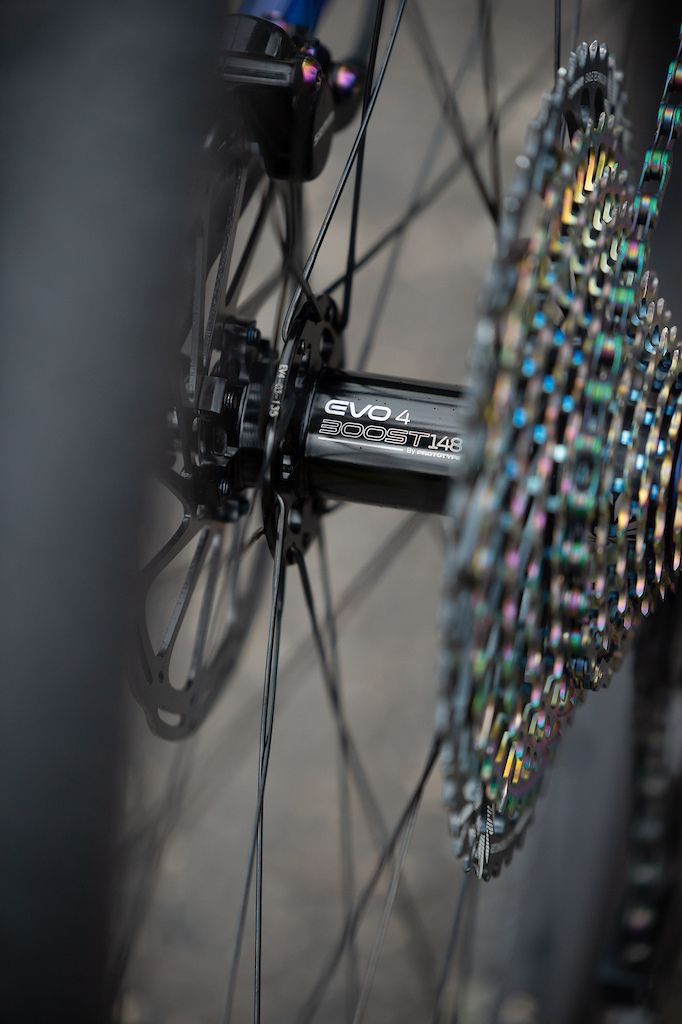 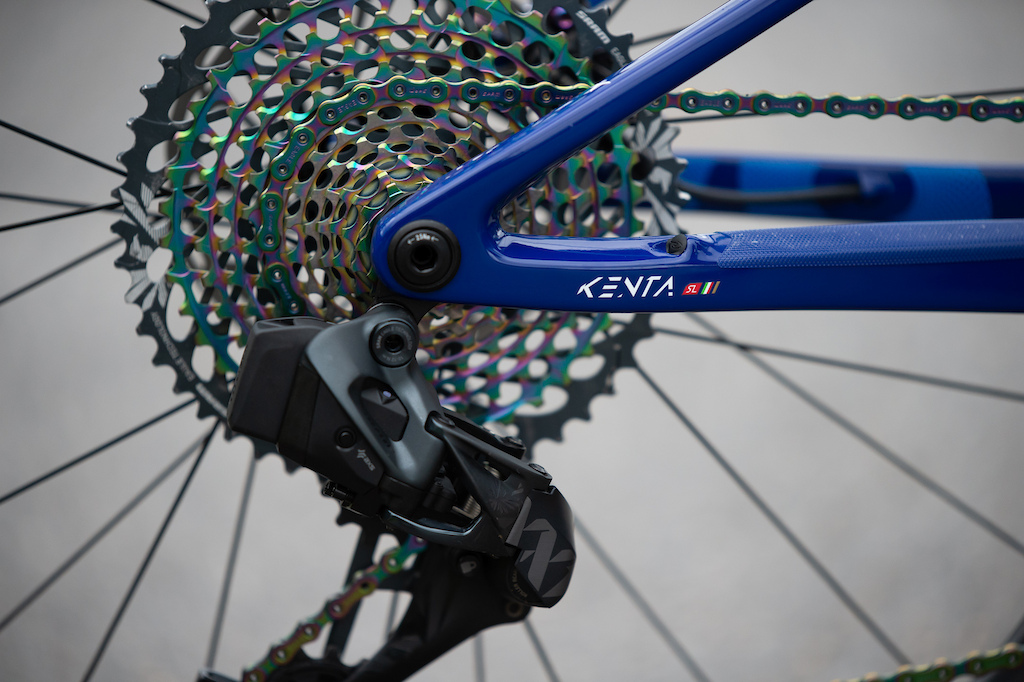 The internal cable routing port is plugged thanks to the wireless AXS groupset. The chainstays are protected by a lightweight, minimal rubber strip. 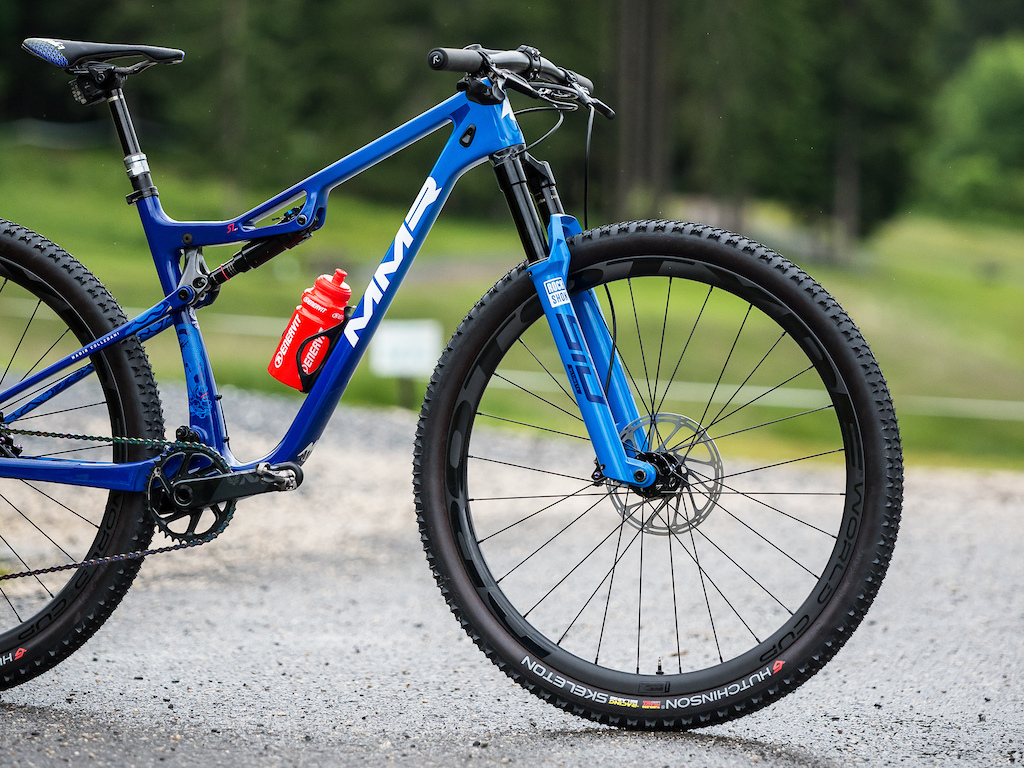 The wheels aren't prototypes but they are made by Portuguese brand Prototype and shod in Hutchinson's Skeleton rubber.

mountaincross (Jul 8, 2021 at 5:35)
Agreed, its like doing a bike check on an enduro and leaving out the bikes travel.

jclnv (Jul 8, 2021 at 0:43) (Below Threshold)
@mgrantorser: So you’re saying you would you take any vaccine regardless of the cost/benefit analysis?

jclnv (Jul 8, 2021 at 7:42) (Below Threshold)
@fracasnoxteam: Due to people being understandably critical of mRNA vaccines with zero longterm safety data. I’d say his tolerance is slightly intolerant.

Jshemuel (Jul 7, 2021 at 14:52)
Naming your component company Prototype makes it almost as hard to find as naming your brake company BraKing

mi-bike (Jul 7, 2021 at 17:15)
Add a space to bra king and you're in bigger trouble finding the equipment manufacturer you're after.

stiingya (Jul 7, 2021 at 21:39)
But how cool when they come out with the wireless version. BraKing 2 Electric Boogaloo

AccidentalDishing (Jul 8, 2021 at 6:06)
I've got the sid 35 with normal charger. It's the best fork I've ridden. It's like a Pike that went through one of those Rocky montages. 300g lighter and the damper tune reduces pedal bob awhen standing and mashing and dive in the corners but is somehow still butter smooth over chunk.

RideThicccBC (Jul 7, 2021 at 14:34)
Pictures and captions are nice but it would be handy if we could get the etch a sketch format.

JustAnotherRiderHere (Jul 8, 2021 at 9:48)
At this point, all for not. The fools in Japan are confusing the word "hypothesis" with "science" and facts...all while running down a delusional path of ignorance. They may as well cancel the Olympics. No one cares anyway.

pink505 (Jul 7, 2021 at 19:28)
I don't see a single interesting bit on that bike....what kind of WC mechanic do they have....No swapped out ti bits, no drilled holes in structural elements, no -25 stem, no shaved off every 4th knob on the tires, no unoptanium spokes. Might as well be an ebike review. + what is with the weird unmatched water bottle and rear tire logo that is about 1 inch off centre of the valve stem....This is the olympics folks not just some local weekend race series...

ticklechicken (Jul 8, 2021 at 7:52)
What are the 3 hoses/cables coming from the left side of the handlebar? I know one is the brake, but what are the others?

zonoskar (Jul 8, 2021 at 7:56)
Probably the lockouts. One seems to go to the fork, the other probably to the rear shock. The dropper seems wireless.

freebikeur (Jul 7, 2021 at 14:53)
That penalty will continue to make waves for a loooooong time ^^ Great match from 2 great teams though!

betsie (Jul 7, 2021 at 23:45)
Doesnt really matter what happens from now, they got there by cheating and the Ref bottled it. No fans at the game or not in England and the ref changes his massive mistake. Sterlings legacy of diving continues. Sucks as England were the better team.

dkos (Jul 7, 2021 at 14:57)
fuck the olympics. they equate to nothing but the decimation of poor folks, unhoused, workers - and the expansion of the police state

I hope your bike never gets stolen because then you'd, like, have to go to the cops, maaaaan.

bman33 (Jul 8, 2021 at 12:38)
dkos seems like a large ball of miserable trust fund baby (Boulder) sunshine doesn't he? Looking at his past comments backs up my assessment as well.
Post a Comment