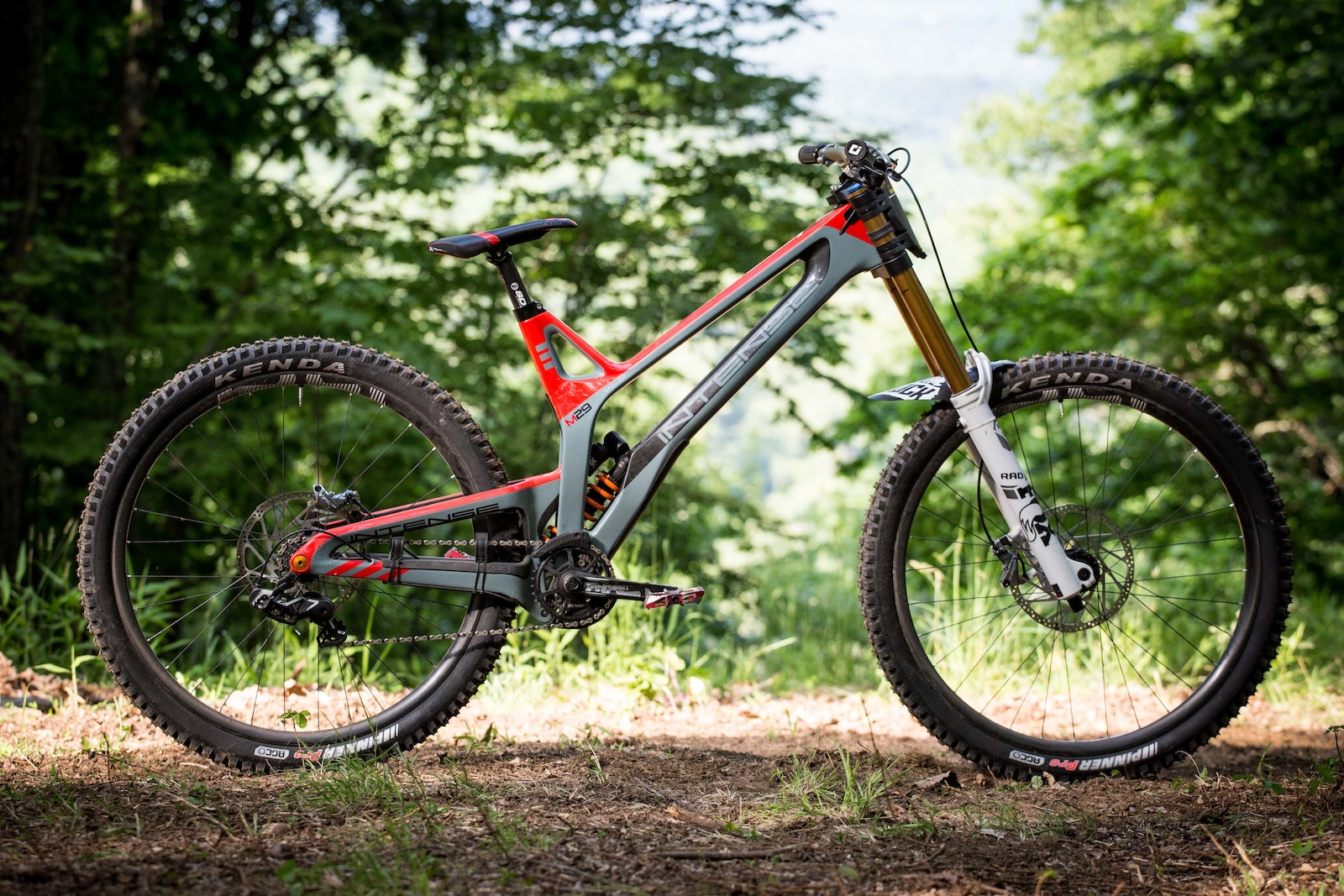 With racing put on hold seemingly indefinitely in March due to COVID-19, it's been a very different season for riders this year. Neko Mulally is no exception. After a flight out of Portugal from testing with Fox as the pandemic spread, he's been staying close to home in Western North Carolina but closely monitoring the situation in the region.

Being one of the more opportunistic racers out there, he's kept busy working to get racing going in any way possible and has been one of the driving forces behind the race this weekend at Windrock and the entire DHSE series being able to be rescheduled by observing recommended safety protocols.

Neko is onboard Intense Factory racing for another season and racing the M29 frame. With the time off from racing, he's switched his training and preparation over to what he would typically be doing late in the year to get ready for the season starting towards the end of summer which includes a lot of preventative training in the gym and riding motocross.

In his spare time, Neko has been working on some trails near his house that will be open to the public late this summer. His mechanic Sam Yates also lives nearby which has been convenient in getting everything on his bike set up and dialed in as well as it possibly can be. 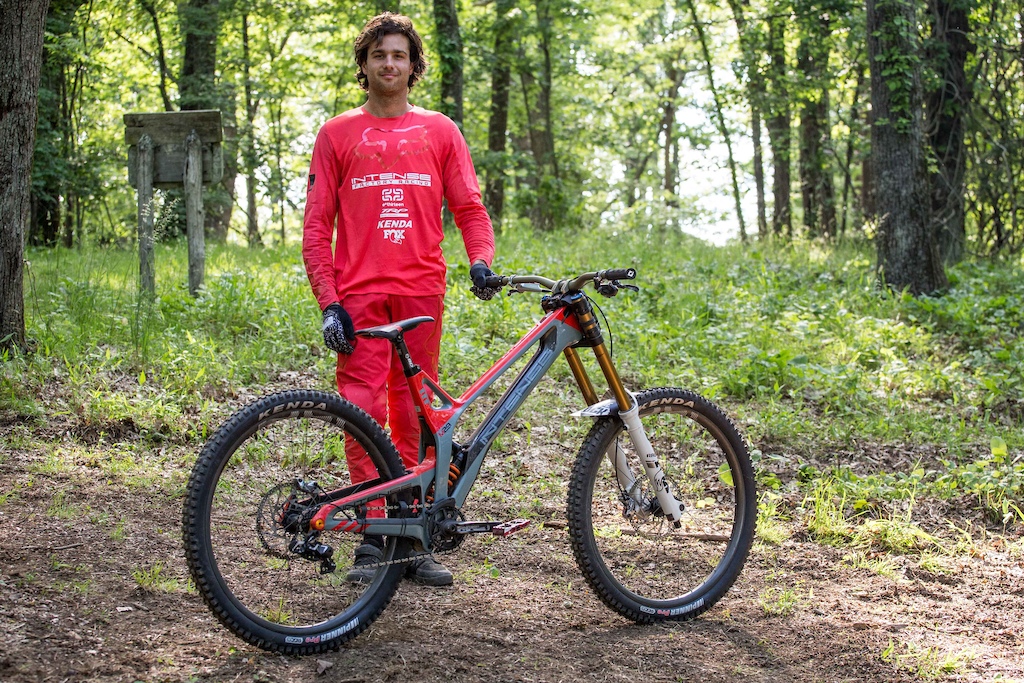 Rider Name Neko Mulally
Age: 27
Height / Weight: 185 lbs / 84 kg; 6' / 182cm
Hometown: Brevard, NC
Instagram: @nekomulally
When asked what he's missed most about racing, he says that seeing friends abroad is at the top of the list and that he's looking forward to all of the tracks on the schedule this year and is thinking and hoping that at least a few of the races will be wet, due to seasonal rains.

Lastly, Neko wants to thank his sponsors and team for supporting him through the strange times and hopes that we can all adapt and keep the sport growing! 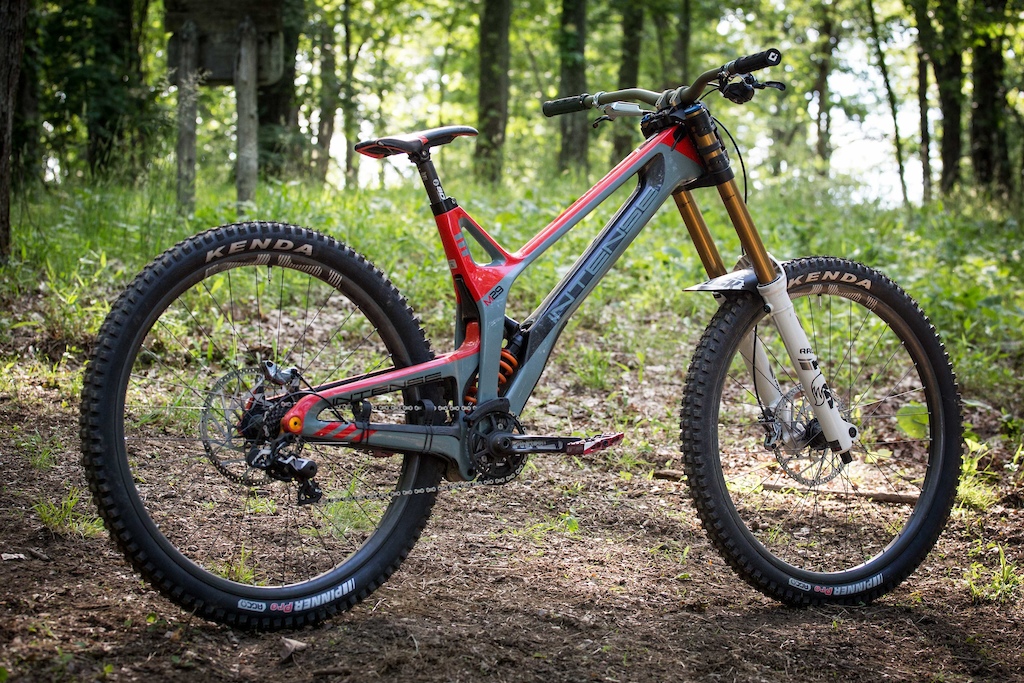 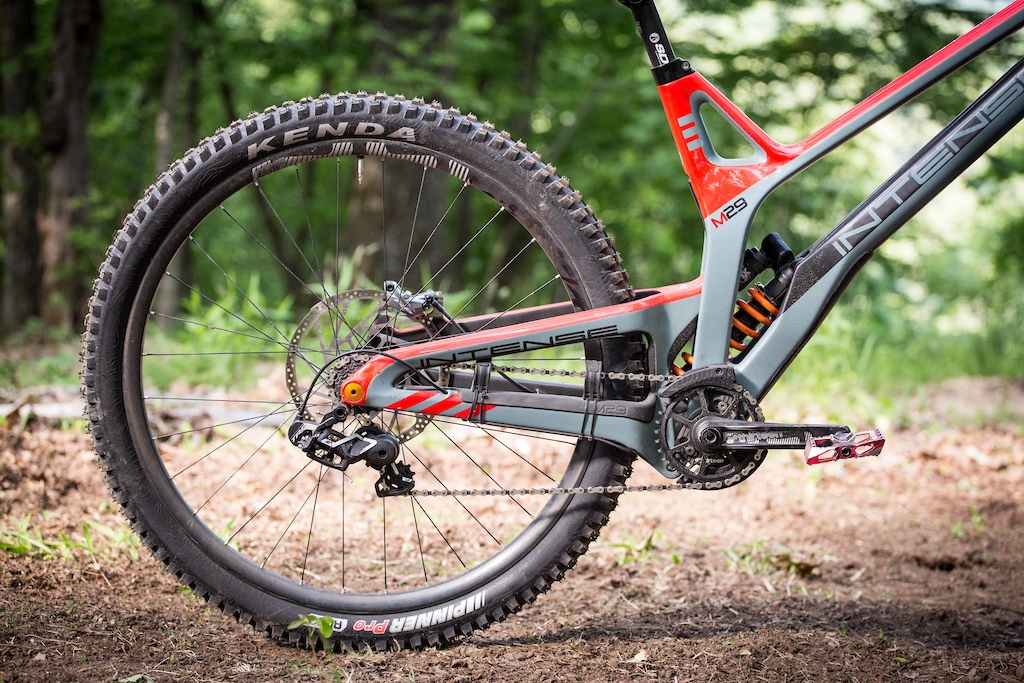 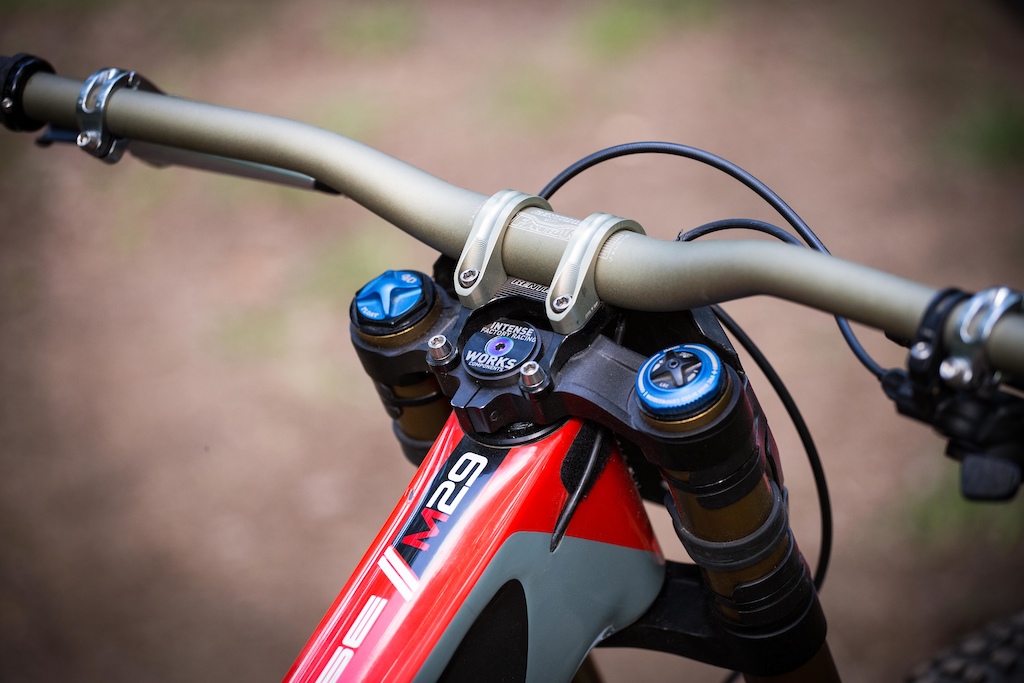 A Works Components headset holds the front end together. 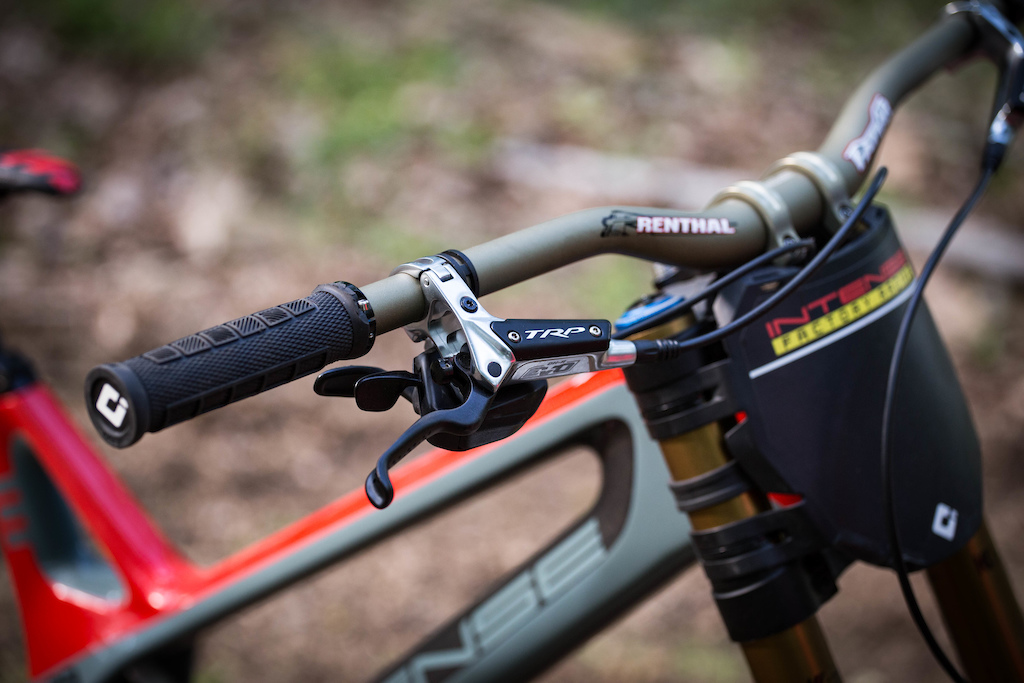 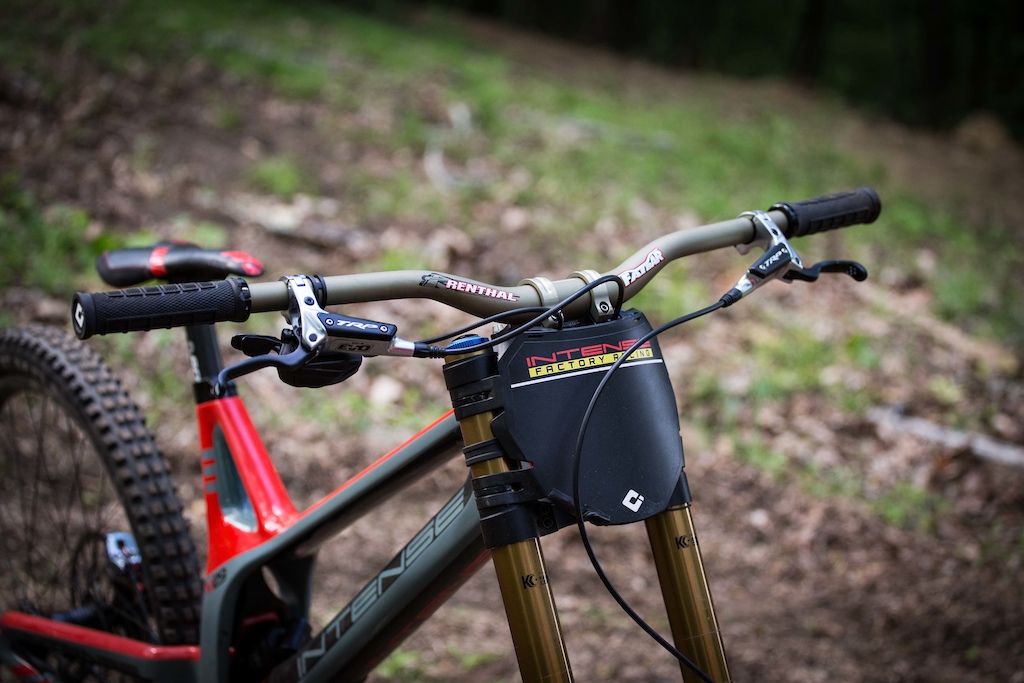 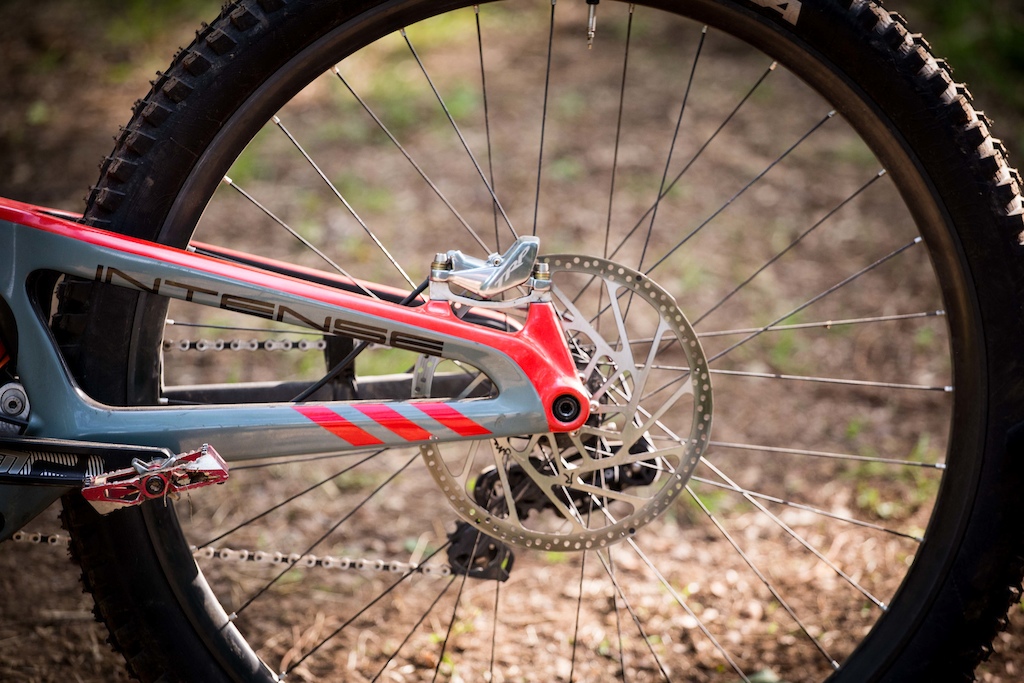 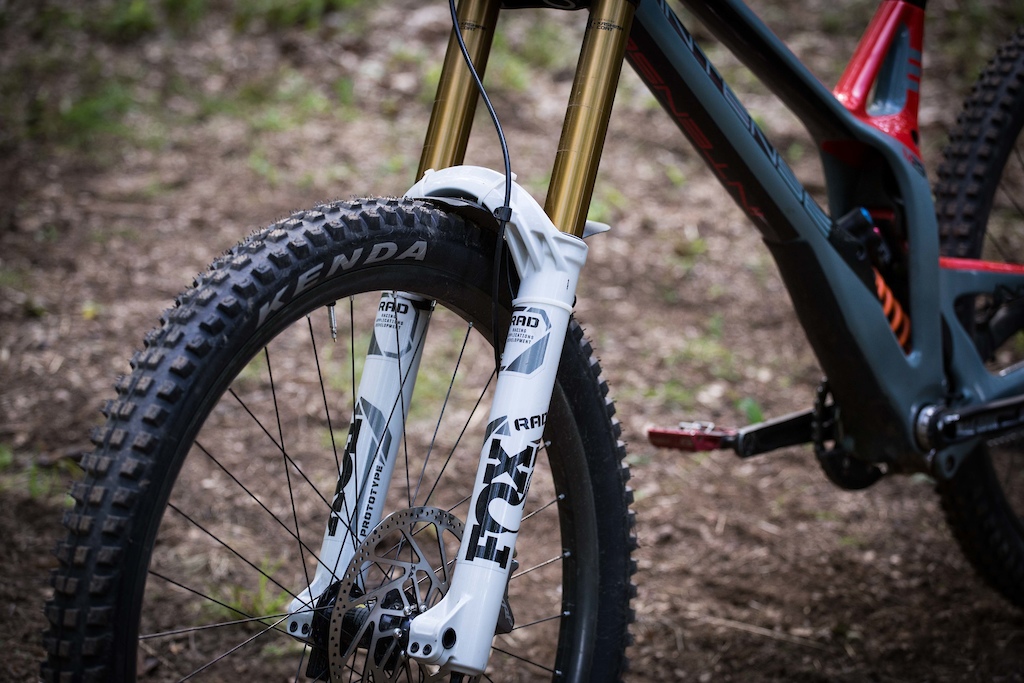 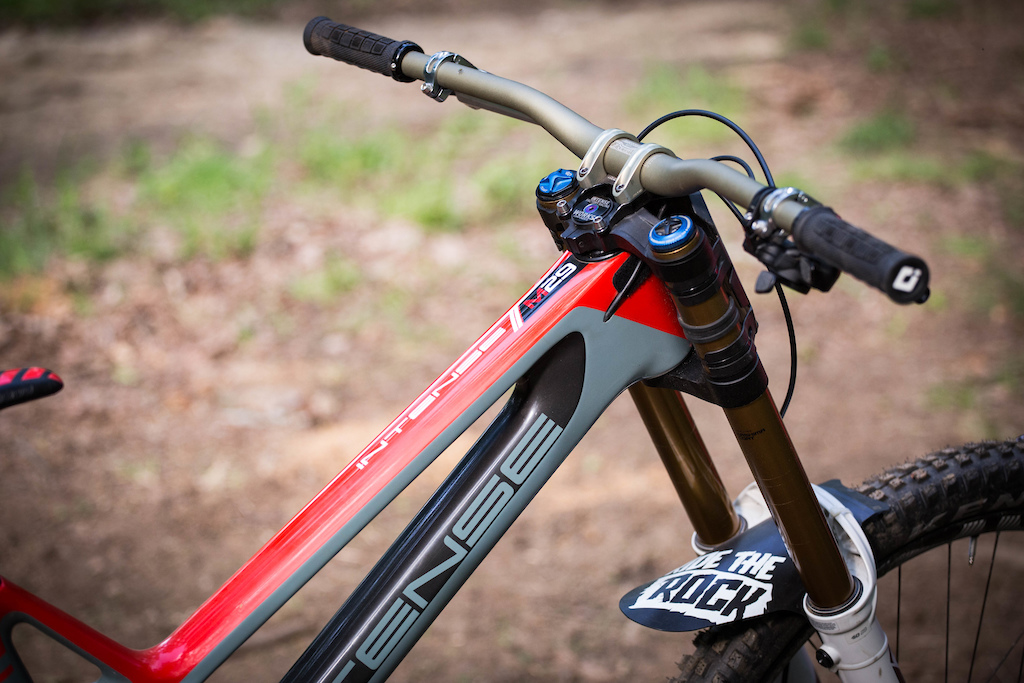 The Fox 40 has 102 PSI, 5 volume spacers, and a 52mm offset crown. Prototype decals are still on the fork from before it recently launched. 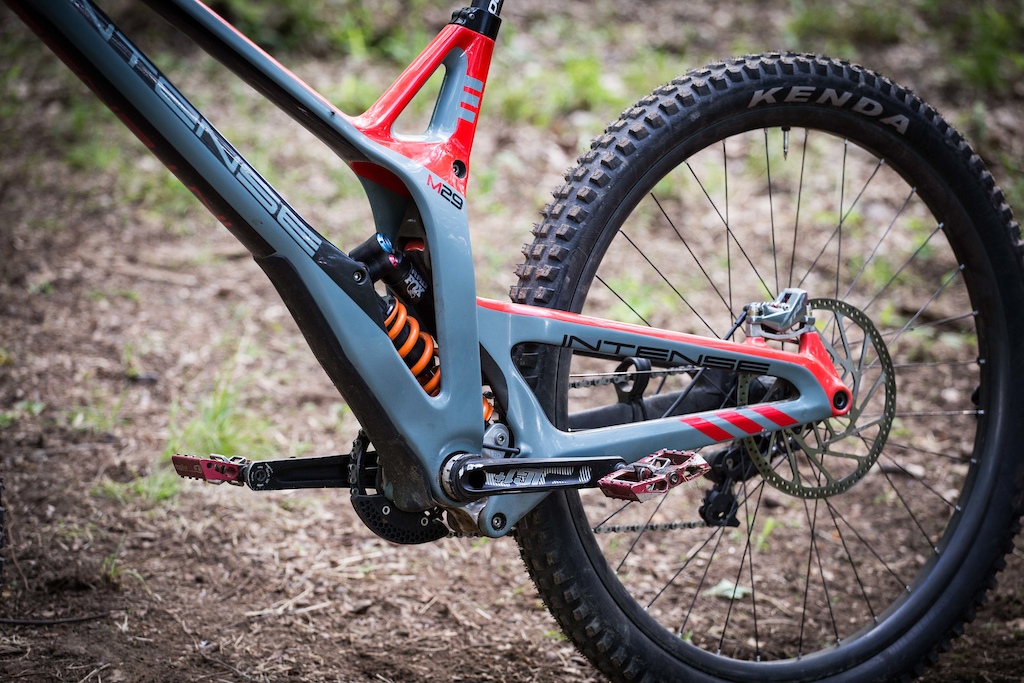 Rear suspension duties are left to the Fox DHX2 with a 550lb spring and BVL tune. 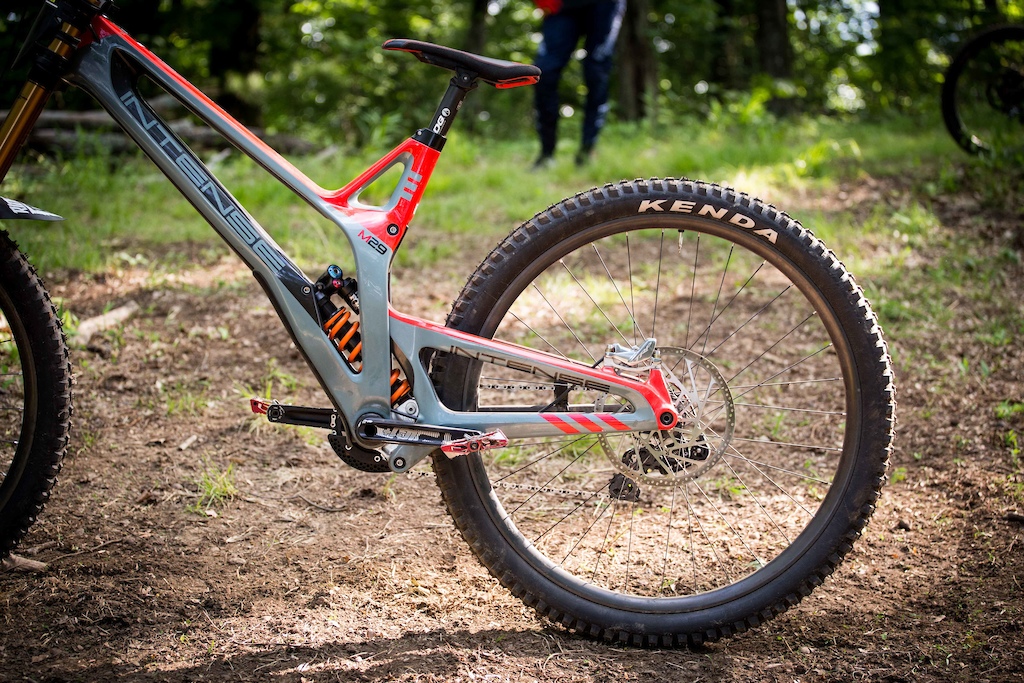 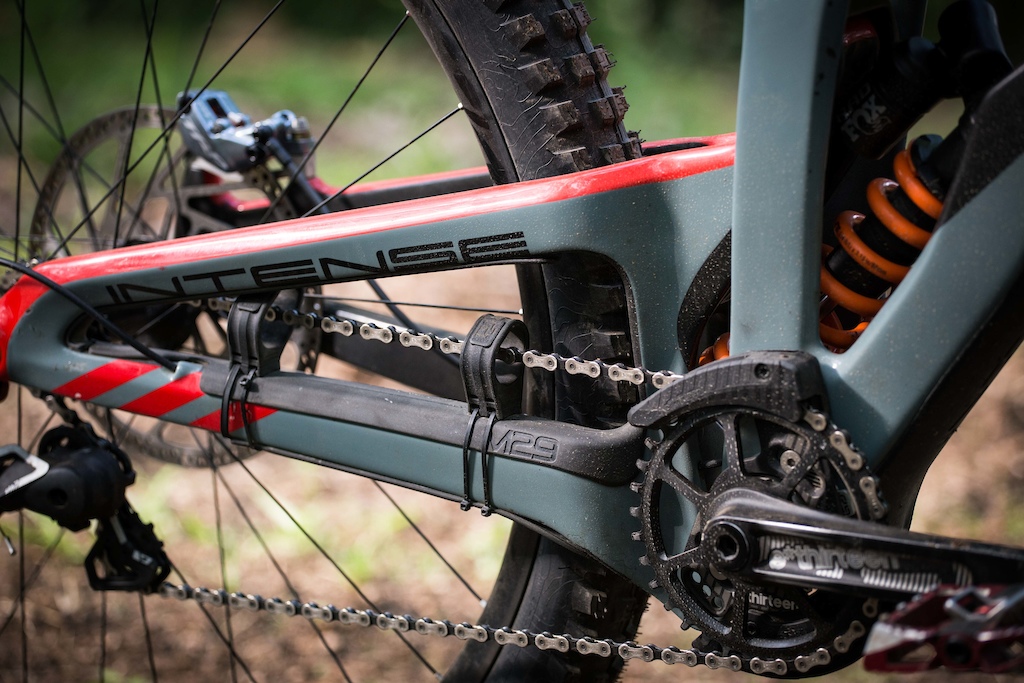 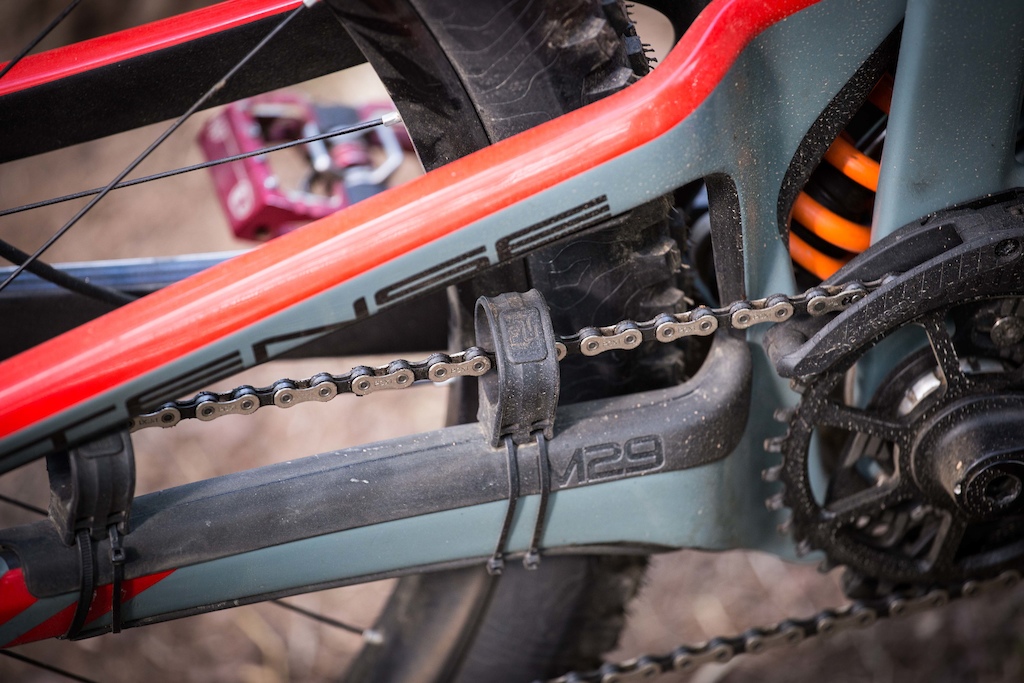 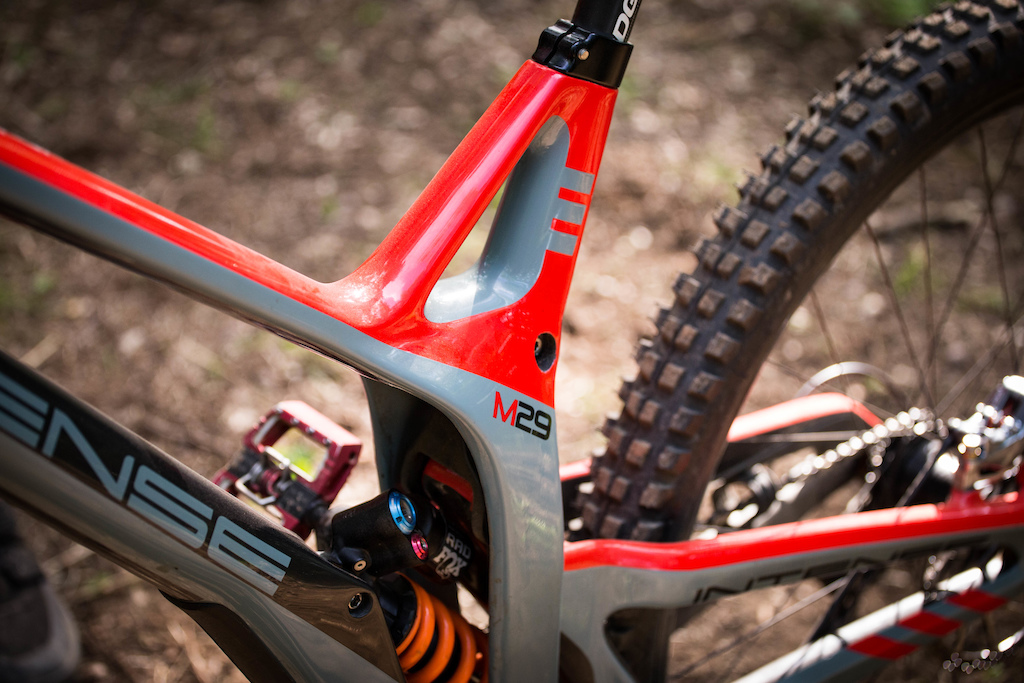 Kenda's Pinner tires with 25 psi up front and 30 in the back along with Flat Tire Defender inserts.
Visit the high-res gallery for more images.

jwdenver (Jun 7, 2020 at 11:47)
It is a very good looking bike. Weird that Aaron, Neko and Jack have all somewhat struggled with it though.

purplegorillaz (Jun 7, 2020 at 12:04)
@jwdenver: Jack had some good results when the aluminium prototype (but different team, suspensions, brakes,...)

padirt (Jun 7, 2020 at 5:35)
Neko is a well spoken individual with keen insight into the future of DH in the US. He is wise beyond his years and has confidence to back it up. Shuttle talk at the rock gets philosophical

ridesmoothbro (Jun 7, 2020 at 3:38)
Thanks to Neko and family for getting this race series up and running.

rpb10276 (Jun 8, 2020 at 18:20)
I currently still ride a 2014 Intense M9 and I love it. And earlier this year I bought a 2020 Intense Primer 29. And I ride the Primer almost everyday. I was never a huge Intense fan. But riding there bikes have changed my outlook on that. I like how the M16 and the M29 look. But after seeing how well the 29" wheels carry speed on Primer. I'm definitely purchasing an M29 for my next DH rig. I'm just not a big fan of the grey paint on the current model.

hamncheez (Jun 7, 2020 at 3:30)
One of the best looking bikes out there. As a Gwin fanboy it bothers me that he's on that prototype instead of one of these with modified links to get a mullet setup

cinco (Jun 7, 2020 at 4:31)
Too many crossing lines, maybe it's the break in the downtub? I think of it as a bit of a minimalist industrial design aesthetic. Something equivalent to new Volvo or Polestar. I like it, but can definitely see it's polarizing.

Drew-O (Jun 7, 2020 at 6:03)
No objection to the bike, but I hate the white Fox RAD lowers that they seem to be giving to all their sponsored riders this year. Everyone: “Damn nothing could clash with the rest of the bike more than that bright orange” Fox: “Hold my beer.”

Beez177 (Jun 7, 2020 at 6:14)
To each their own sir, I think its one of the best looking bikes out right now. I hate swoopy s bent tubes, the shortest distance between two points is a straight line. A lot of straight lines on this bad boy.

Unrealityshow (Jun 7, 2020 at 8:56)
@Drew-O: I respectfully disagree. The colours of white and black cannot clash with anything. I very much wish I could get a 38 with white lowers.

NorCalNomad (Jun 7, 2020 at 11:15)
I definitely think the same. From a professional design point of view it still does JUST barely pull aesthetic details from the M line throughout the years, but this evolution misses a few things imo. And none of them have been this straight since the M1.

The M3 Through M16 all had curves and the signature negative space curved triangle behind the head tube area of the front triangle. This one morphed into a hockey stick negative space with really straight lines. The silhouette of the front triangle no longer really reads as a triangle. It's reads as a thin rectangle with a small triangle stuck on the top for the seat tube gusset. Another detail that is an Intense staple is the concave surface on the top tube right behind the head tube. They started to walk away from that in the M16 Carbon (alum had it) . But I think it's something that could have brought a bit more interest to the headtube junction. I know with CF you probably don't need it, but even some sort of graphic to allude to it would make this bike look better IMO.

The rear triangle though still reads very M series and I think they nailed it there.

Just overall the bike reads much more "engineered" than "engineered AND beautiful" like the M3 through M16.

Also if you don’t like the white Fox lowers let’s put some orange ones on there, that will really clash. Personally I wish more pro riders would paint the fork to match the bike, that looks factory. All these signature colors for forks now days is a little over the top.

Did you hear Aaron Twin hasn't podiumed all season?
No, but his bike looks great! ????

ydopen (Jun 7, 2020 at 16:31)
@NorCalNomad: I think the departure from the classic Intense design aesthetic might have something to do with the fact that this frame was designed in conjunction with CERO designs (see www.wearecero.com/projects/intense-m29). It takes a few design cues from the Unno Ever which Cesar Rojo spent several years designing, racing and refining.

Personally, I think it's a stunning bike!

m3ggi (Jun 8, 2020 at 1:32)
lol thats bs. This is probably one of the best looking frames of DH bikes in the world cup now. Much better looking than the M16 and SC v10 (almost same bike). Graphics could be way better i agree, in terms of colors and lines but thats a different thing.

NorCalNomad (Jun 8, 2020 at 19:25)
@ydopen: I hope no one though that I didn't think it was a good design, cause CERO can definitely design! I just wanted to put my opinions on it in a very clear way instead of just, "i no like" and hopefully help some people understand why or why not they like it. If that's the direction Intense wanted to go in that's on them to guide their brand visuals. Successful design should evoke people's reaction and this one does. I just have always liked the intersection of curves but still reading as geometric forms that was Intense's aesthetic over the years.

None of this is to say it's not a good bike. I'm sure it rides AMAZING, I have yet to hop on an intense that wasn't awesome.

tacklingdummy (Jun 7, 2020 at 10:09)
The lower linkage looks like it surrounds the bottom bracket. That is interesting.

friendlyfoe (Jun 7, 2020 at 14:52)
Interesting but also over complicated and means the triangle hangs down below the bottom bracket. Catching the front of that chainstay on a square edged rock would end real freaking badly.

likeittacky (Jun 7, 2020 at 16:30)
@friendlyfoe: The only rock that should ever come into contact at that point would be one kicked up by the front tire. If your hitting rocks at the bottom bracket area something is wrong like the rider or suspension sag set at 50%. Also the low pivot location is different when compressed by the rider sitting on the bike due to the path of movement of the linkage.

Not sure I agree that it's impossible to hit the bottom bracket area off a rock though lol.

likeittacky (Jun 7, 2020 at 18:51)
@friendlyfoe: Not that its impossible, rather very unlikely do to location. If you careen into any rock large enough whether landing a jump or attempting to lunge over or onto one, the result would likely be catastrophic based on velocity and other factors regardless of what bike your riding. That area of the wheel tucked just below and behind the bottom bracket is not a place anyone would ever want a heavy rock strike.

tacklingdummy (Jun 7, 2020 at 19:53)
@friendlyfoe: Likely a rock would never hit the front of the chainstay because the rock would hit the chainring first. Also, the compressed suspension would move the linkage further out of the way.

likeittacky (Jun 7, 2020 at 20:24)
@tacklingdummy: Unless the rock is a Medieval spear shaped point put their by a cataclysmic event strategically situated in order to barbarically destroy your ride and reclaim its ground.

NorCalNomad (Jun 8, 2020 at 19:31)
@friendlyfoe: Intense has had their lower VPP link end up bellow the BB like that for over a decade (SC even did it on the V10 back in the day)...doesn't seem to stop people from going REALLY fast and winning WC races on them

DoubleCrownAddict (Jun 7, 2020 at 14:28)
He building more trails... awesome. Seems like he's getting the reputation as the best DH track designer in the states.

ranke (Jun 7, 2020 at 10:45)
super sick bike for a badass national champ. and just ordered me a slap silencer! had no idea those things existed!

finnbuckley (Jun 7, 2020 at 19:26)
is anyone going to mention the custom lower link with adjustable shock mount?

McArdle (Jun 7, 2020 at 8:31)
Not a fan, nice colourway but the lines don’t flow and it’s not pretty
Below threshold threads are hidden

cains08 (Jun 7, 2020 at 5:05)
Looks like it would fold in half easily. I'm basing my physics knowledge on what I learned in primary school but aren't triangles stronger than long skinny rectangles?