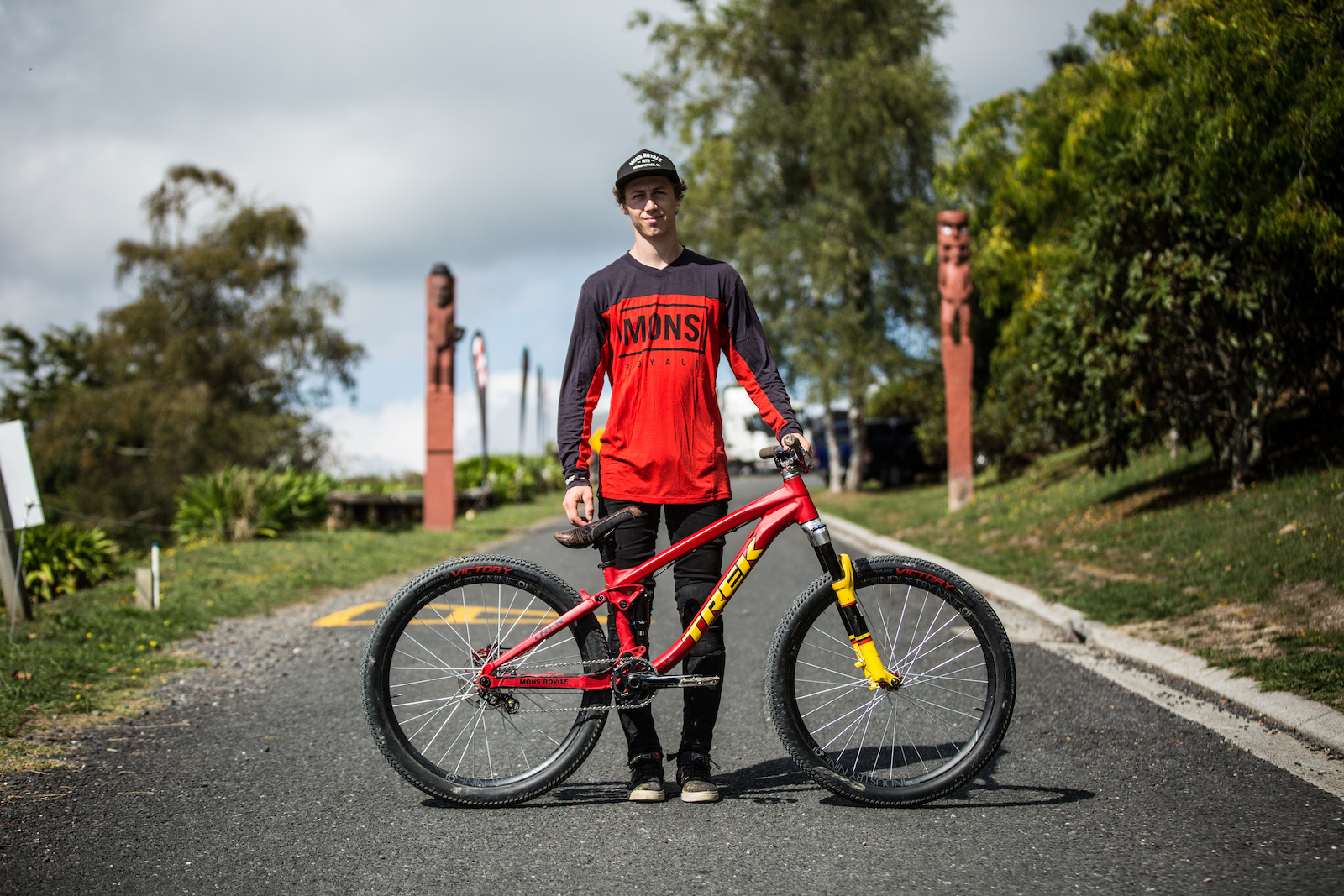 BIKE CHECK
Peter Kaiser's
Trek Ticket S
Photography by Andy Vathis
Peter Kaiser hails from Innsbruck Austria. The 21-year-old has been riding mountain bikes for most of his life, but only competing since 2014. He's a regular competitor in European slopestyle competitions, and is planning on also doing the full gamut of Crankworx Whip-offs along with Speed & Style this season.

When he's not competing, he's behind the lens filming and working on projects in the media and industry. He has a knack for producing some pretty cool riding videos and has a few in the works currently.

This weekend, Peter was an alternate in the slopestyle competition, however he won the Oceana Whip-off Championships in Rotorua. While his Trek Ticket S isn't the bike he won that event on, it's pretty rad and it has a sweet paint up that Peter did himself, so we decided it was worth a closer look.

Peter doesn't have a ton of custom or unavailable stuff on his bike, but he did throw on his own paint and has it dialed in for landing some pretty heavy hits. The air pressures on his fork and shock are about as high as he can possibly run. He has the shock at 300psi and the fork is at 160psi. He's running volume reducers to make everything ramp up quickly.

The gyro is a prototype from Trickstuff that should be available in the next few months. He is running Industry Nine wheels, a pair of lightweight Chaoyang tires, and an SB One chain tensioner. Check out the photos below for a few more details. 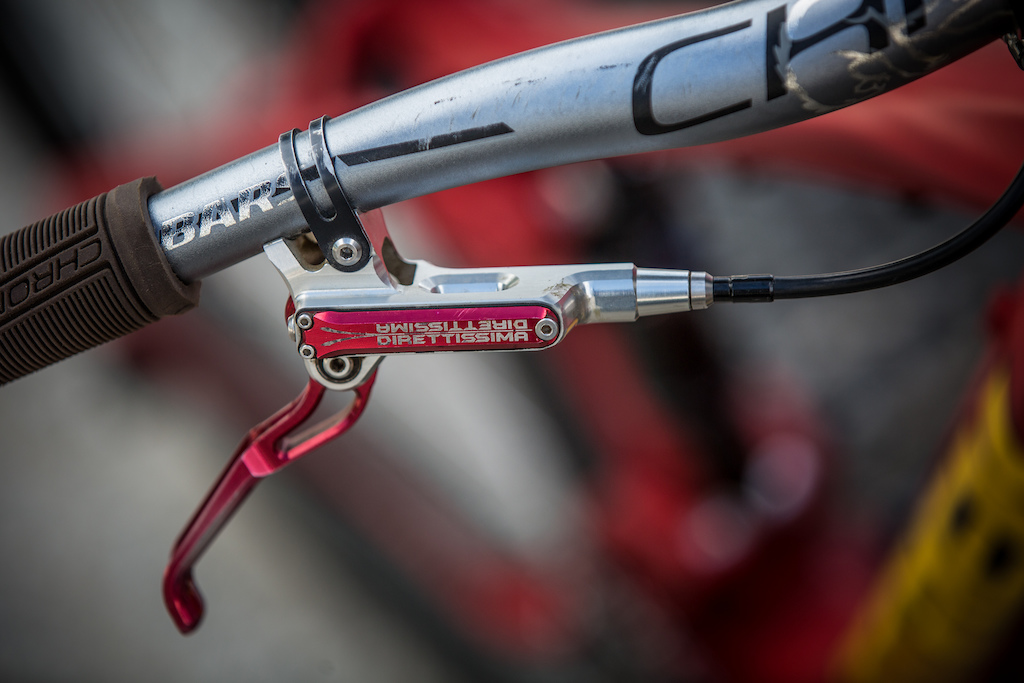 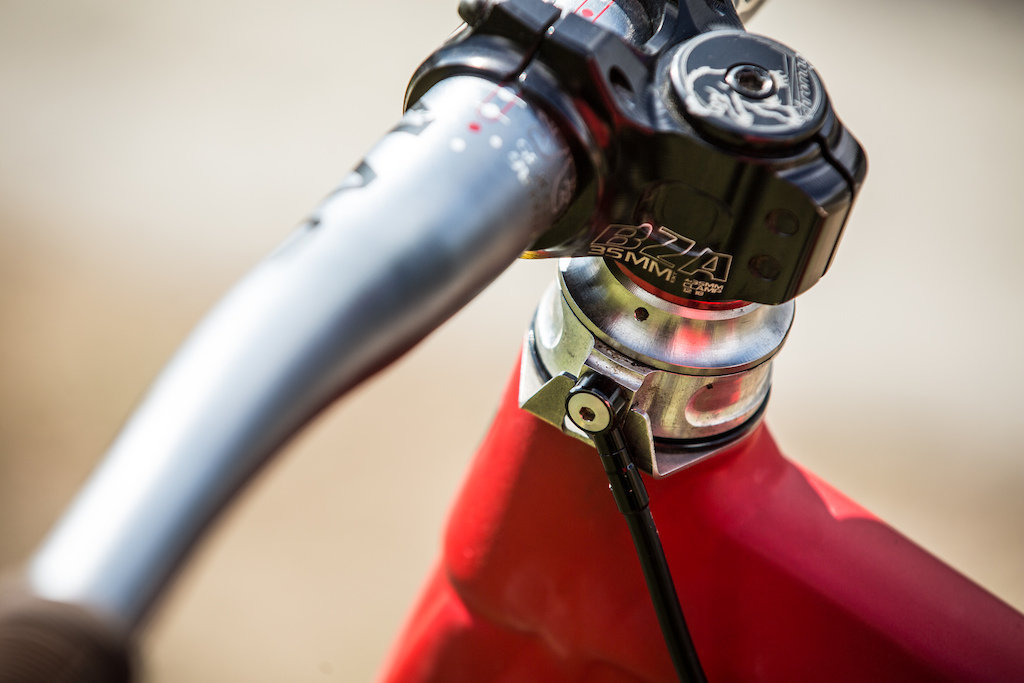 Trickstuff brakes and gyro for extra stopping power while still allowing for barspins and tailwhips. 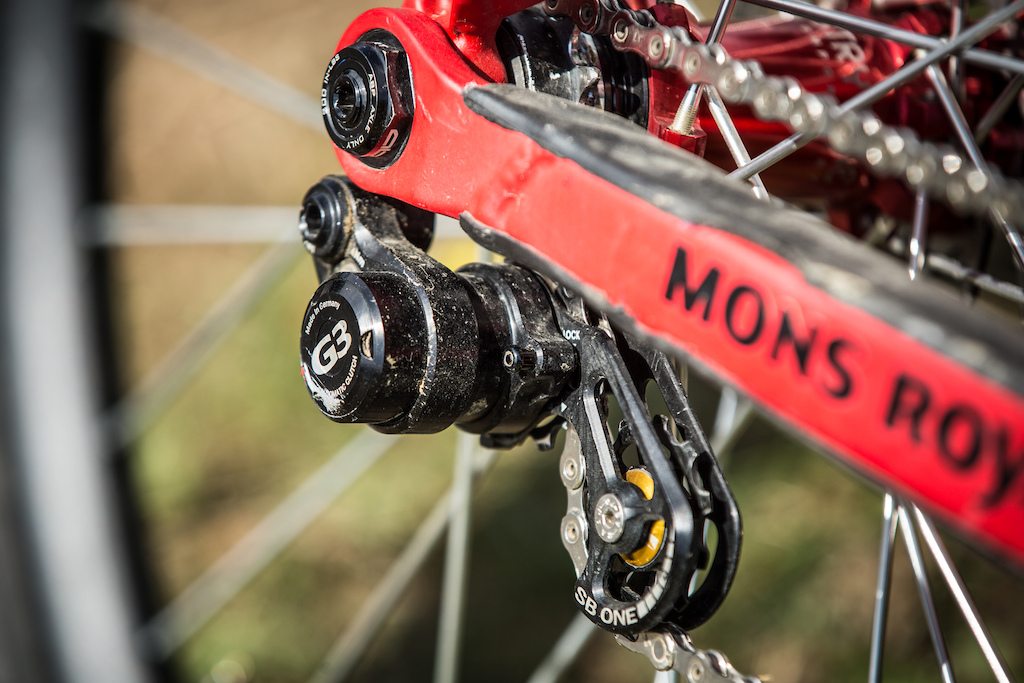 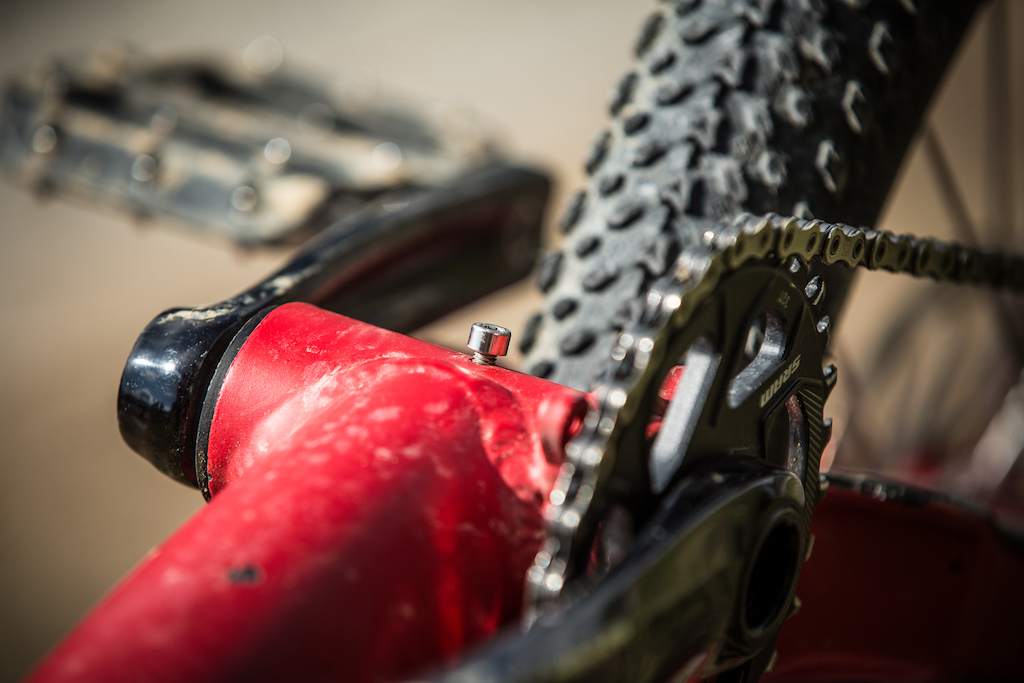 The chain tensioner is accompanied by a bolt that puts friction on a PVC shim that Peter has around the crank spindle. This keeps the crankarms from inadvertently rotating when his feet are off of the pedals in the air, ensuring the landing platform is right where he left it. 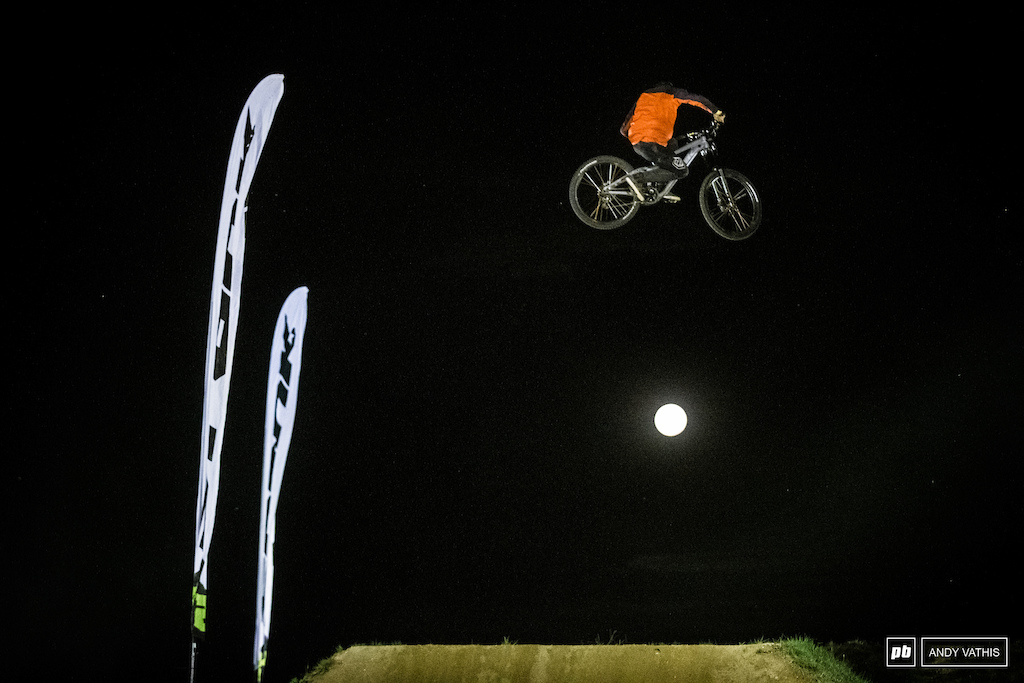 Blasting to the moon to win Whip Offs. 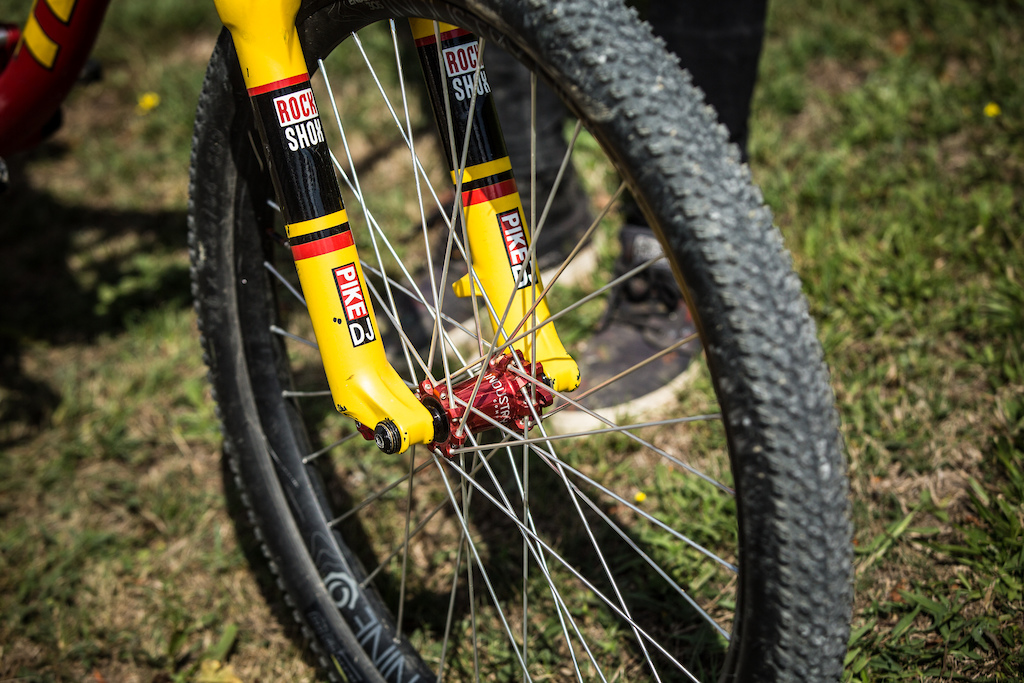 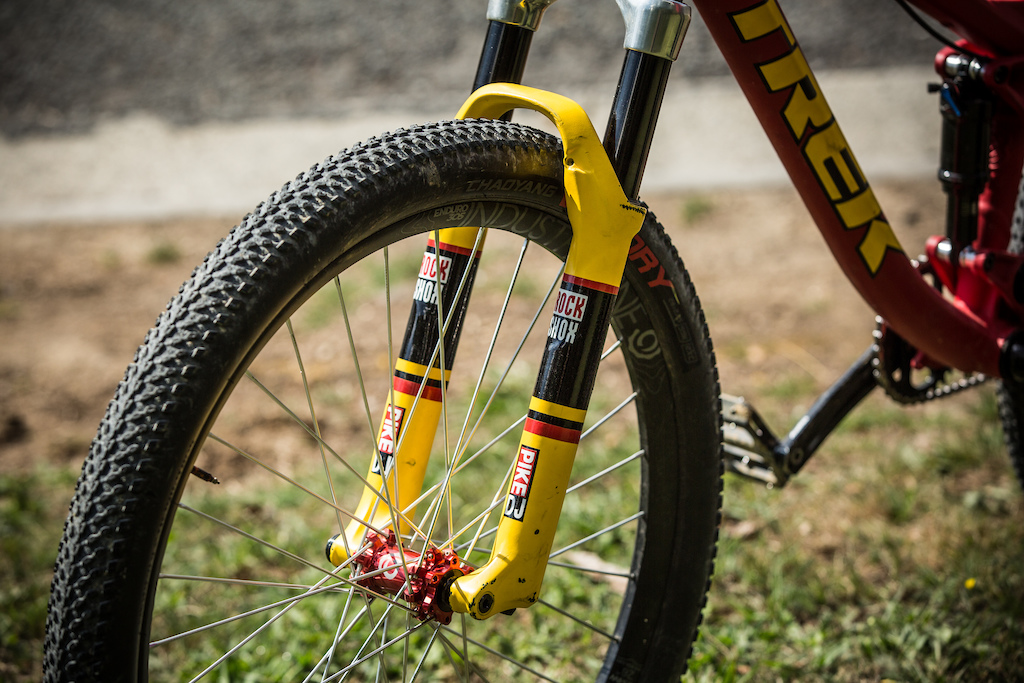 Let's be real. There's not a lot of tech on a slopestyle bike however, this paint scheme on the fork is on point. Peter was likely barely walking when the old Rockshox Judy forks were around, but I bet more than a few people can remember the yellow paint from back in the day.
MENTIONS: @trek / @peterkaiser

danielsapp Plus (Mar 25, 2019 at 13:53)
Maybe Peter can chime in here - He did it himself and said it was a quick and dirty job but it looked great to me. He said he needed to do a little touch up on it after several rides.

lacuna (Mar 26, 2019 at 6:02)
The '97 Judy SL look is spot on. I used to lust after those back in the day. Then Marzocchi brought out bombers and Rockshox were irrelevant for quite a while!