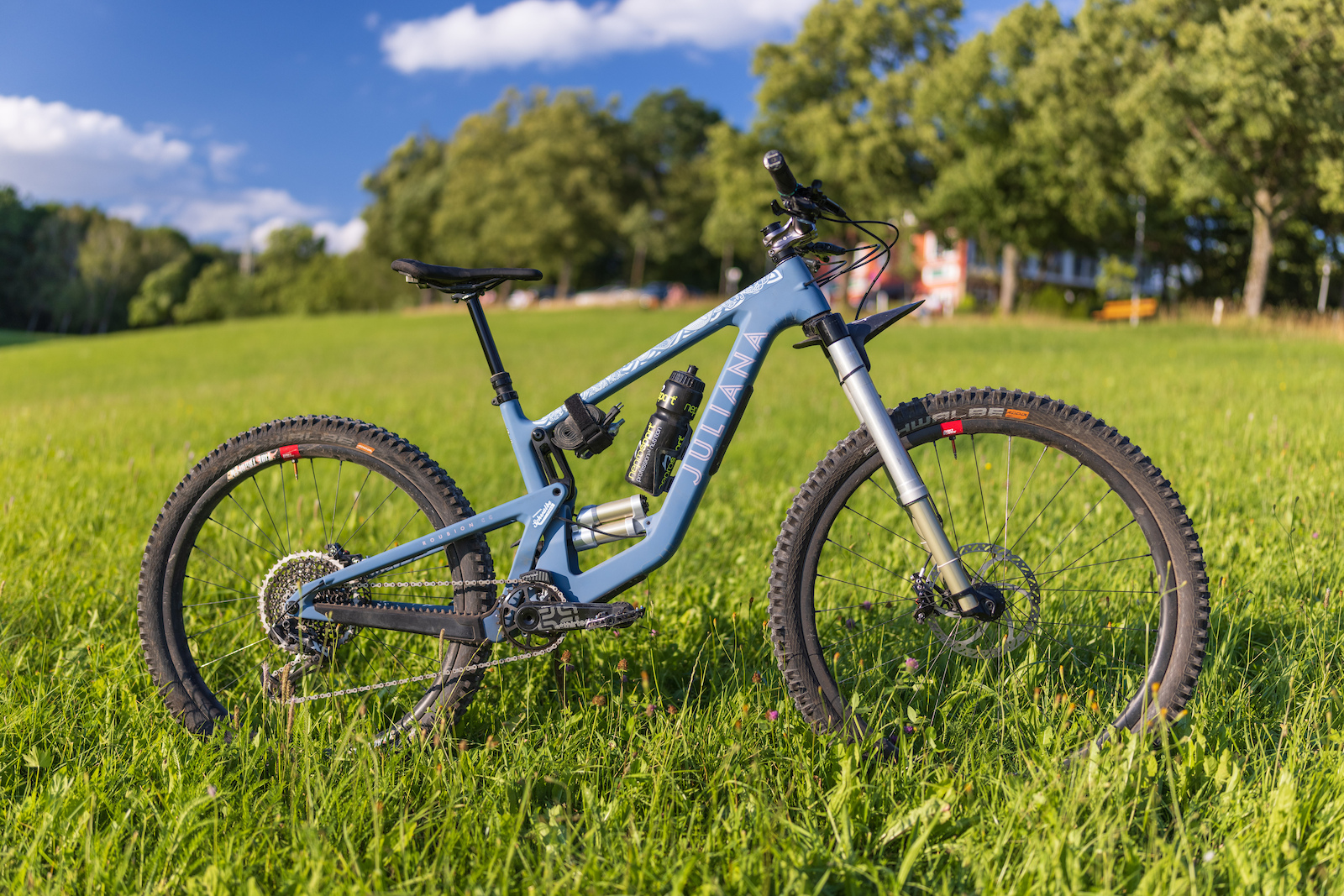 BIKE CHECK
Raphaela Richter's
Juliana Roubion
Photography by Lars Scharl
2021 has no doubt been an exciting year for enduro's rising stars, particularly in the women's field, and we've seem so many new names and faces mixing it up that just about anyone in the top 10 could conceivably win an EWS race. The competition is more robust than ever.

Likewise, in a year when bike companies and consumers alike have scrambled to get their hands on some of the more common parts, the spotlight has moved to some of the lesser-known brands making components that can compete with the giants. Here, we take a look at Raphaela's Juliana Roubion, built up with an Intend Bandit USD fork and Hover shock, parts designed and built by former Trickstuff engineer Cornelius Kapfinger.

Raphaela Richter has burst onto the EWS scene in the last few years, earning herself a handful of top-10s in both EWS and World Cup Downhill races and even a career-best 2nd place in Les Orres and a 3rd in Zermatt in 2019. In 2021, she finished the season ranked 10th in the EWS Global Ranking, which is no small feat for a 23-year-old optometrist who has taken on the world stage by teaming up with her friend Tanja Naber to form the Juliana Free Agents EWS team. 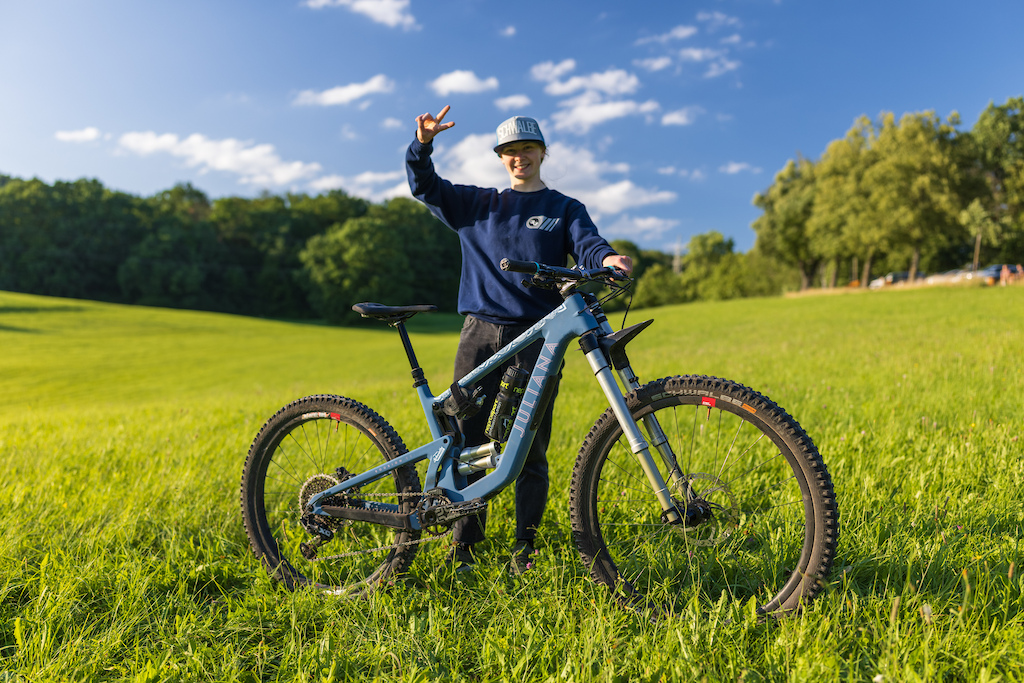 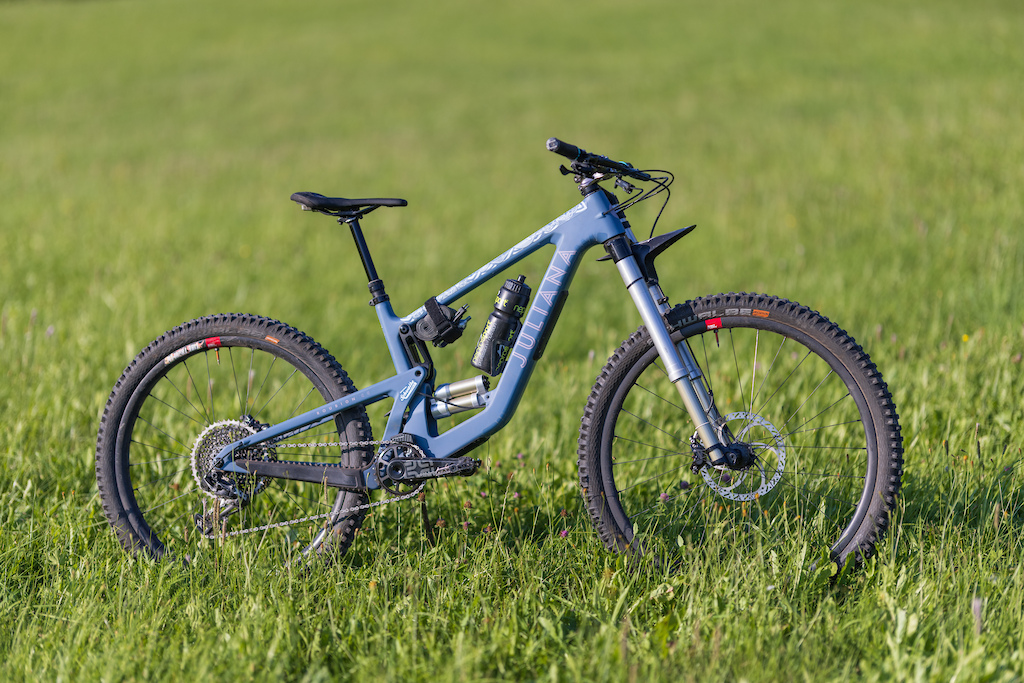 The bike is a nice mix of common and obscure parts, all of which seem to work quite well for Raphaela if we're judging by her EWS results. 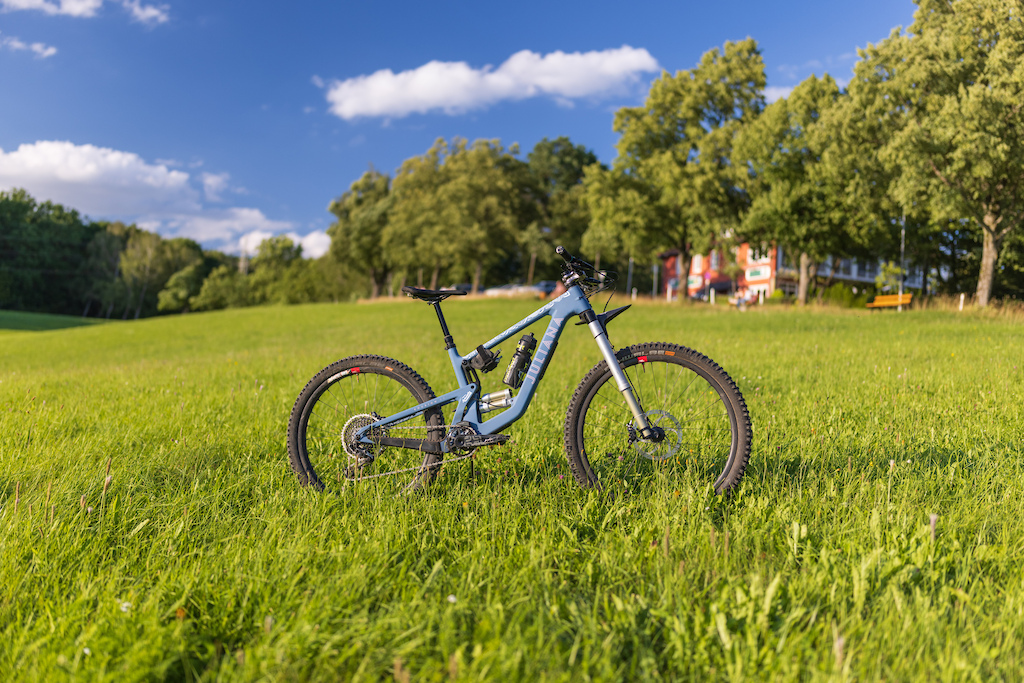 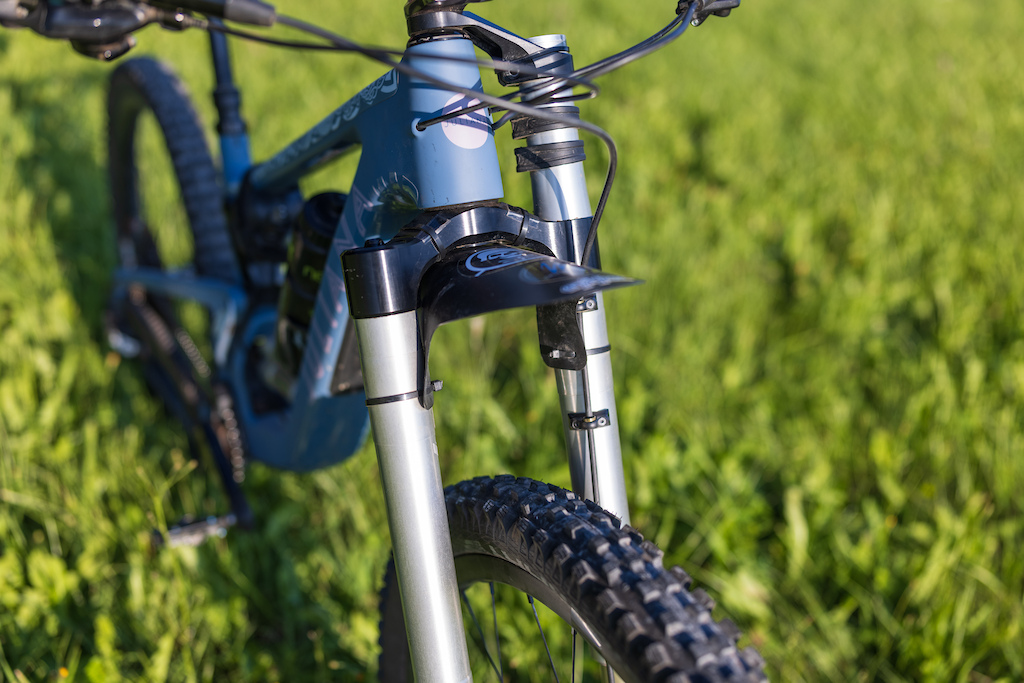 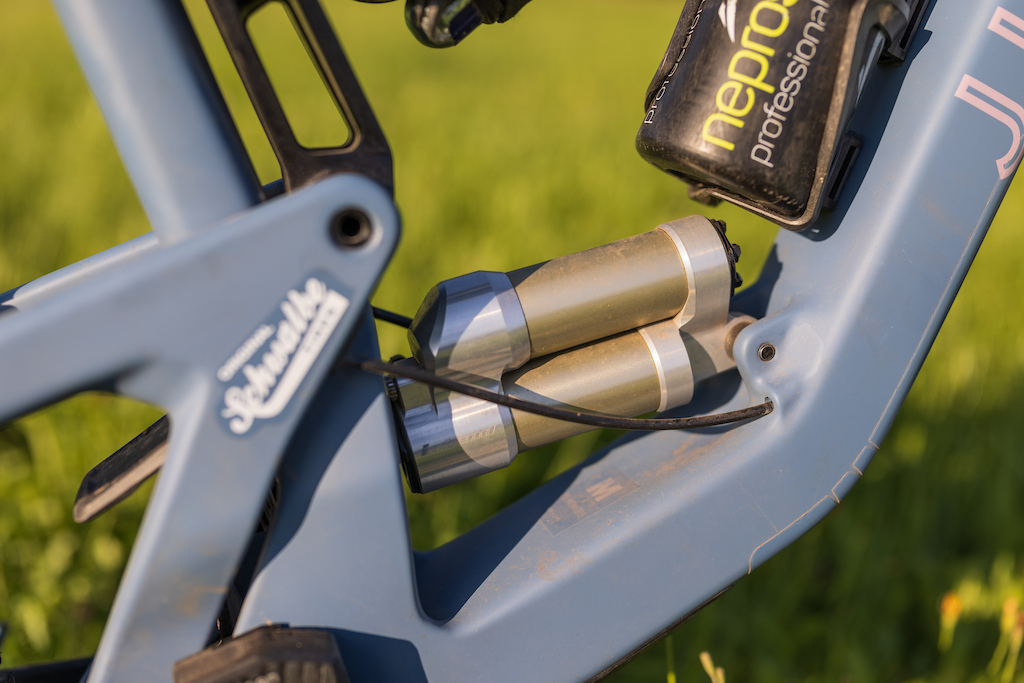 Highlights of the build include suspension from Intend Bicycle Components, Cornelius Kapfinger's impressive one-man operation. Raphaela started the season with the Ebonite, a less aggressive trail and enduro fork, but swapped to the burlier Bandit, which uses Intend's unique asymmetric design. 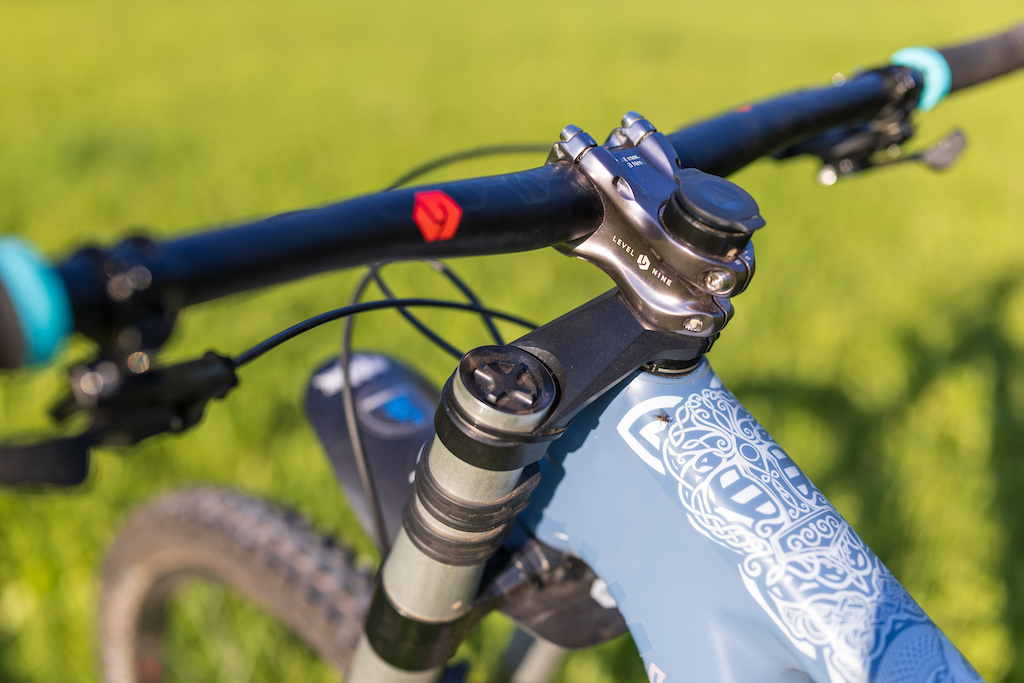 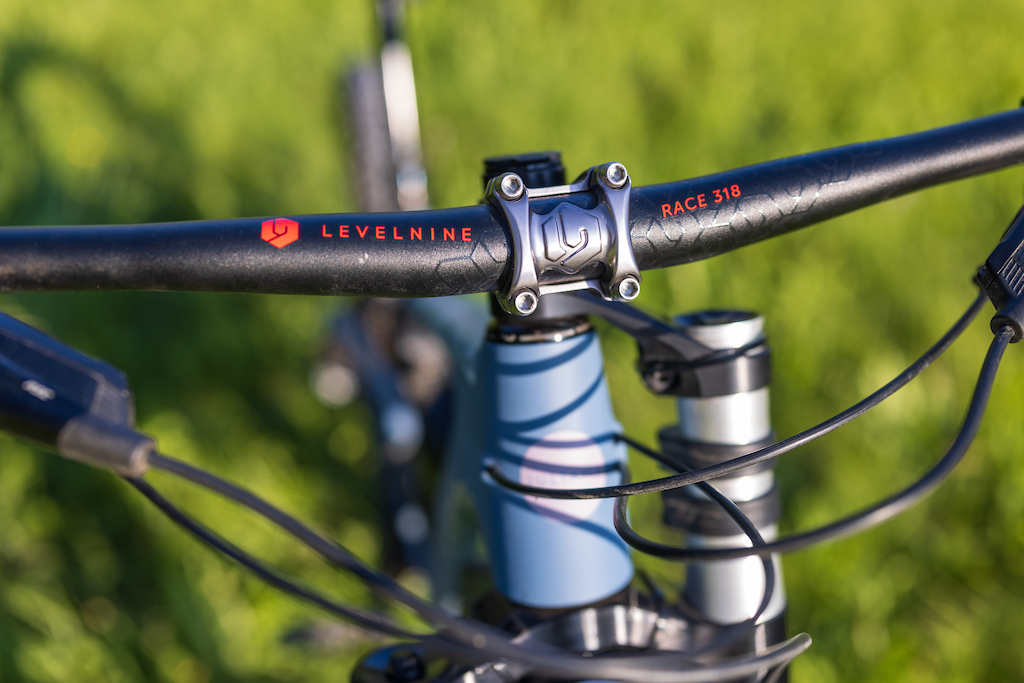 Raphaela's cockpit comes from Levelnine. She opted for a flatter bar and a 50 mm stem, putting her in a fairly forward position over the bike. 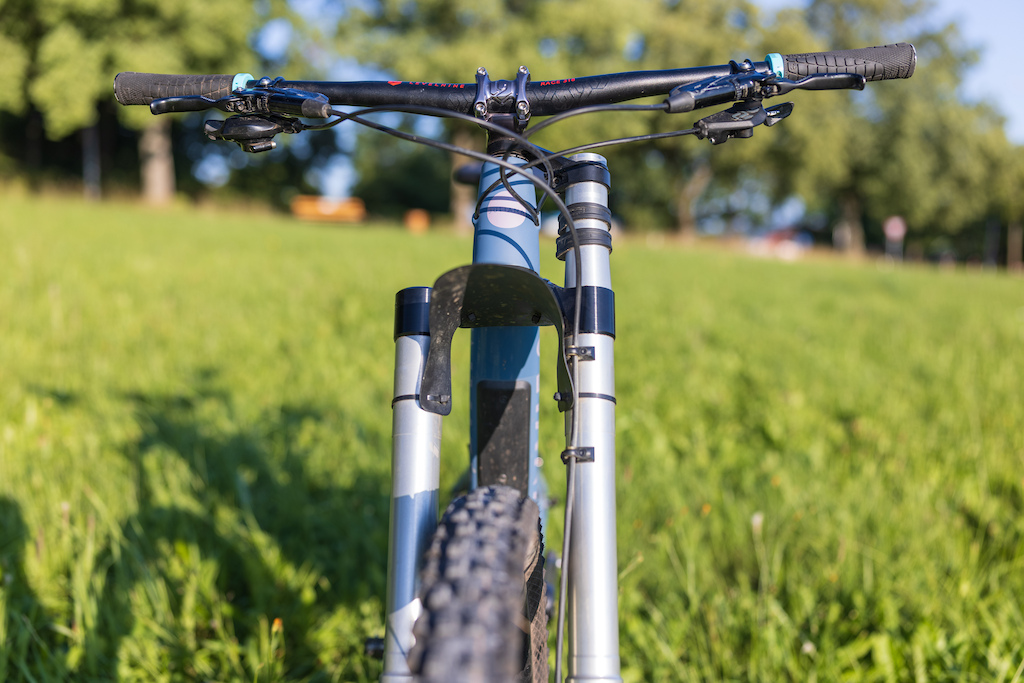 Raphaela runs her fork at 50 psi with the compression fully open and rebound in the middle, at 3 clicks out of 6. 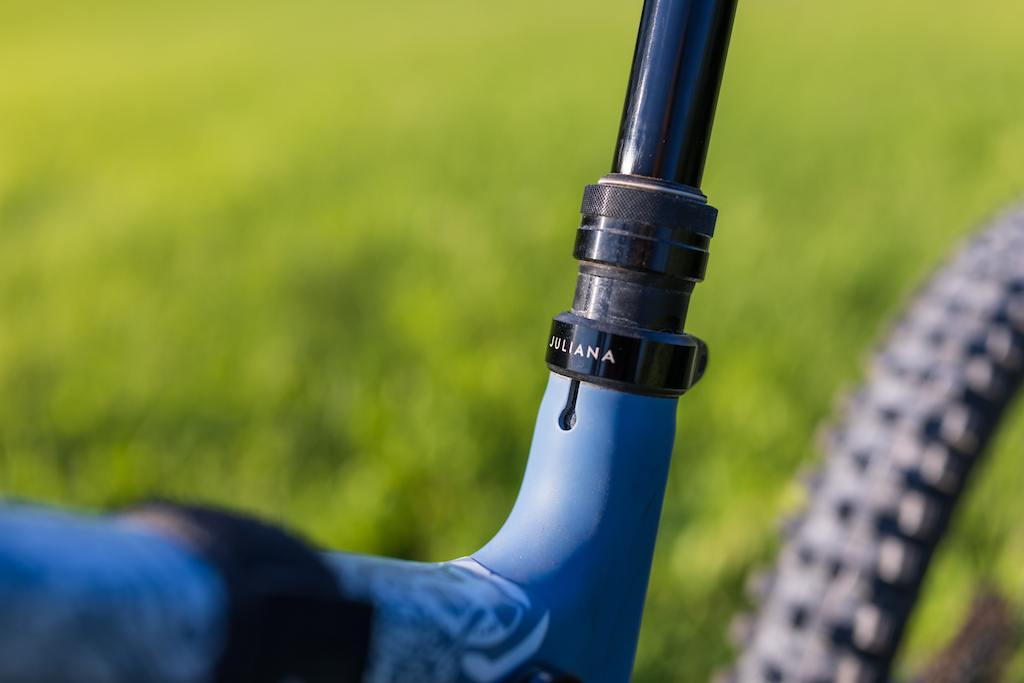 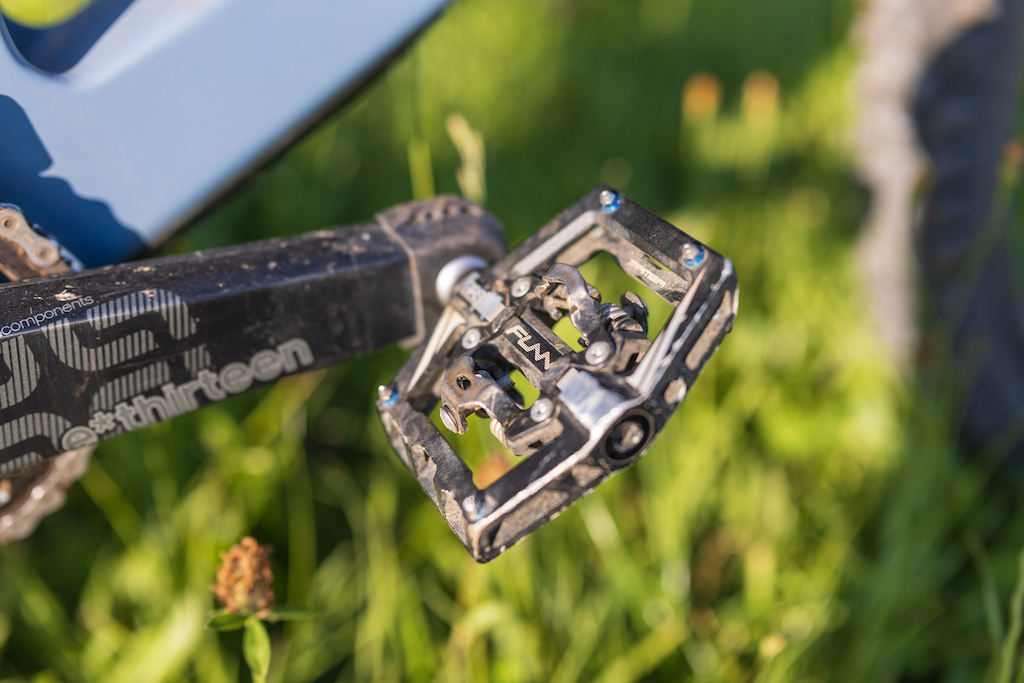 An e*Thirteen Vario Infinite Dropper and Funn Components Mamba Pedals manage some of the bike's contact points, along with an SQ Lab 6OX Saddle and 7OX Grips. 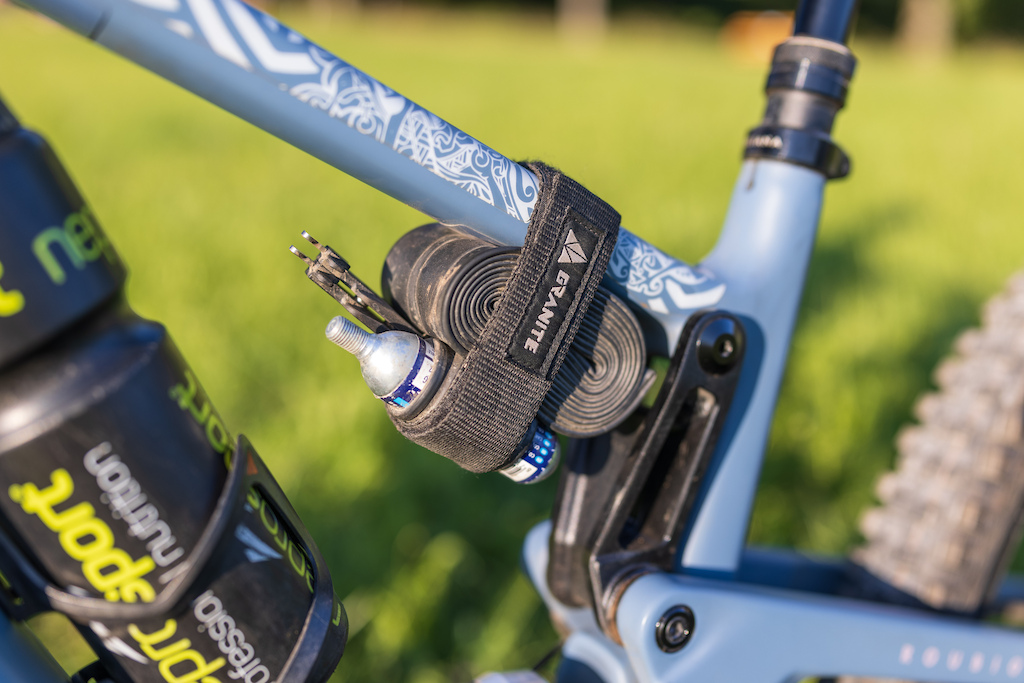 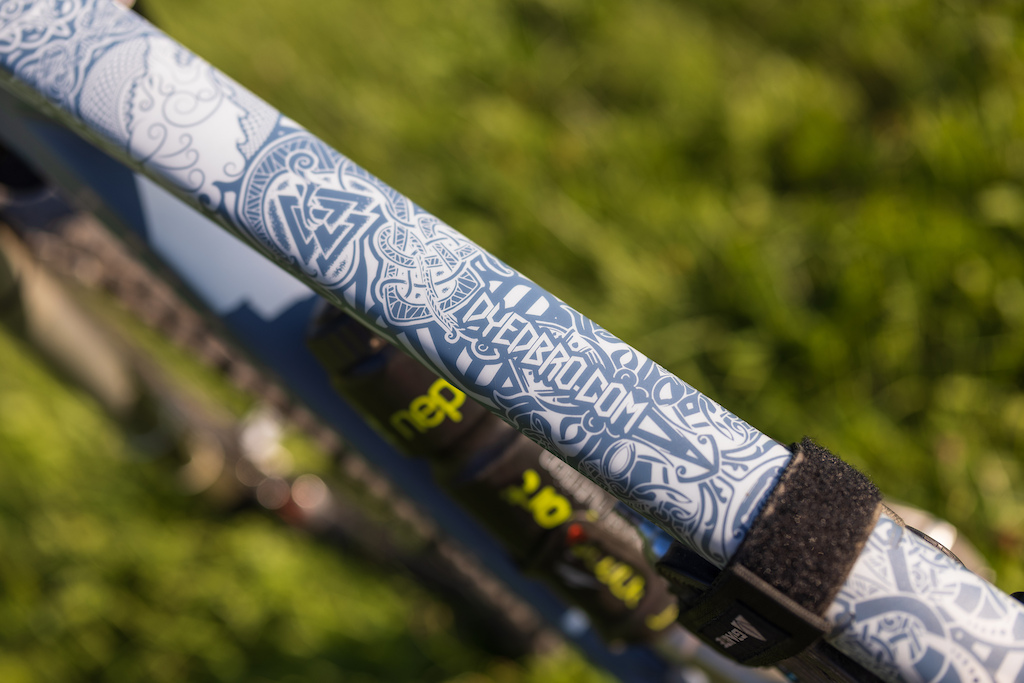 Some finishing touches from Dyedbro and Granite Design. 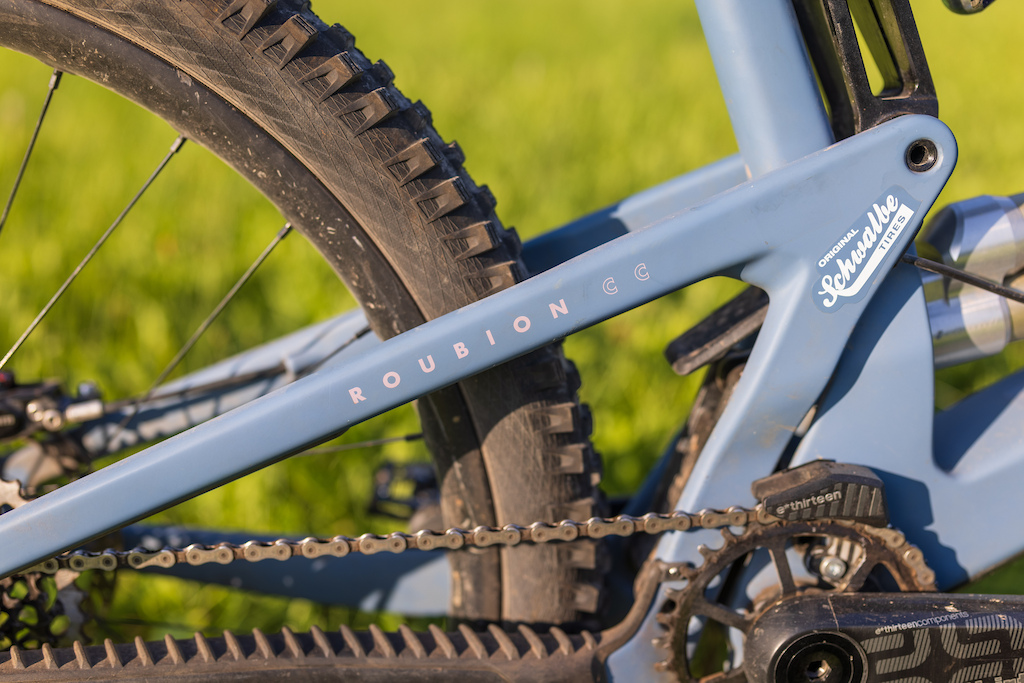 FredrikWestman (Nov 9, 2021 at 2:14)
I actually didn't think about the fact that you can't put a fender near the wheel on a USD fork before I saw this.

BeardlessMarinRider (Nov 9, 2021 at 2:17) (Below Threshold)
@FredrikWestman: There is nothing stopping it being zip tied further down. It doesn't have to go all the way up to the crown. Ask anyone running rigid forks and a mudguard

Afterschoolsports (Nov 9, 2021 at 4:04)
I run my dorado fender like the photos. It’s really not an issue. The caveat being that I live in a place with well drained terrain. I wouldn’t mind a MX style fender but I’m happy with my current setup. The old DVO emerald had the perfect solution, something similar would be simple to implement.

Jmtbauckland (Nov 9, 2021 at 12:17)
@FredrikWestman: it sort of depends where u live. The lack of mudguard might not bother people where I live but it might be an issue in other places.

terribleone1982 (Nov 10, 2021 at 4:06)
@Jmtbauckland: I'm going to see if I can survive a winter of UK Peak District riding sans mudguard this year. I got through a summer in Scotland, so it should be no different lol.

Your going to need it

betobi (Nov 9, 2021 at 4:21)
Having seen her race a few times now and ridden the stages by myself I can just say this stuff works and she is unbelievably fast and smooth. Hope She has a great season 2022!

masira (Nov 9, 2021 at 4:29)
I love the fact that her bike is still dusty and dirty for the fotoshoot.
Great use of the location above the Festspielhaus, also. Nice to see Bayreuth again ;-)

Afterschoolsports (Nov 9, 2021 at 4:06)
I love how the grass makes the bike only photos look like it’s a scale model of a bike.

cbursi13 (Nov 9, 2021 at 7:57)
This is actually an optical illusion phenomenon that occurs when a tilt shift lens is employed. Go ahead and google "tilt shift lens photography" and eye guzzle some big stuff pretending to be small.

therealkondor (Nov 9, 2021 at 13:44)
I'm surprised how far I had to scroll to find this comment. Not disagreeing with you, just surprised.

dirtmcleod (Nov 10, 2021 at 4:13)
@JohSch: Nice of them but every E13 component I have ever had has broken and the couple E13 sponsored riders I ride with have the same comments. Maybe she has had better luck but I think I would prefer to buy my own parts and not have E13 but she isn't me.

KalkhoffKiller (Nov 9, 2021 at 5:05)
Yeah, my forks are covered in scratches. Gotta say that i do much bike and hike on alpine trails tho. If you don't do that it might not be that bad.

mrti (Nov 9, 2021 at 7:27)
I ride my Intend fork for 3 years in rough BC terrain. The only scratches I have are on the dropouts! Funny enough the Lyric on my 2nd bike has a deep scratch from a stone that was jammed between stanchion and bridge... Scratches can happen everywhere, no matter what.

KalkhoffKiller (Nov 9, 2021 at 10:20)
@mrti: I forgot to add that my lowers are covered in scratches obviously while my uppers have only 2 or three tiny ones. I think if you are really careful with your bike and ride wide open stuff it might be possible to avoid scratches but if you're doing many shuttle runs, different chairlifts, bike & hike in rocky terrain its unavoidable to get scratches in this are so its weird they construct them like that.

smoothmoose (Nov 10, 2021 at 12:05)
Why not a mullet Nomad? I'm the same height as her and tried both the small and medium Bronson MX and definitely prefer the small. But I guess she's a racer, still think a mullet Nomad would be better.

JohSch (Nov 9, 2021 at 22:53)
Pity that SC made her race a new mullet bike right before the start of the season instead of the repainted trusty Megatower

chakaping (Nov 9, 2021 at 1:26)
Why do we hardly ever see Intend's suspension units reviewed by the MTB media?
Is it because they're more show than go?

isla0xtkpiq45ulaey2 (Nov 9, 2021 at 2:30)
it probably has more to do with Intend being as small as they are, they can't hand out test units to every magazine like bigger companies can. There have been a few tests in the past though iirc and everyone I met who rides one seems to be very impressed.

chakaping (Nov 9, 2021 at 2:42)
@isla0xtkpiq45ulaey2: I could only find one review, by Seb Stott when he worked at Bikeradar. That was rather lukewarm.