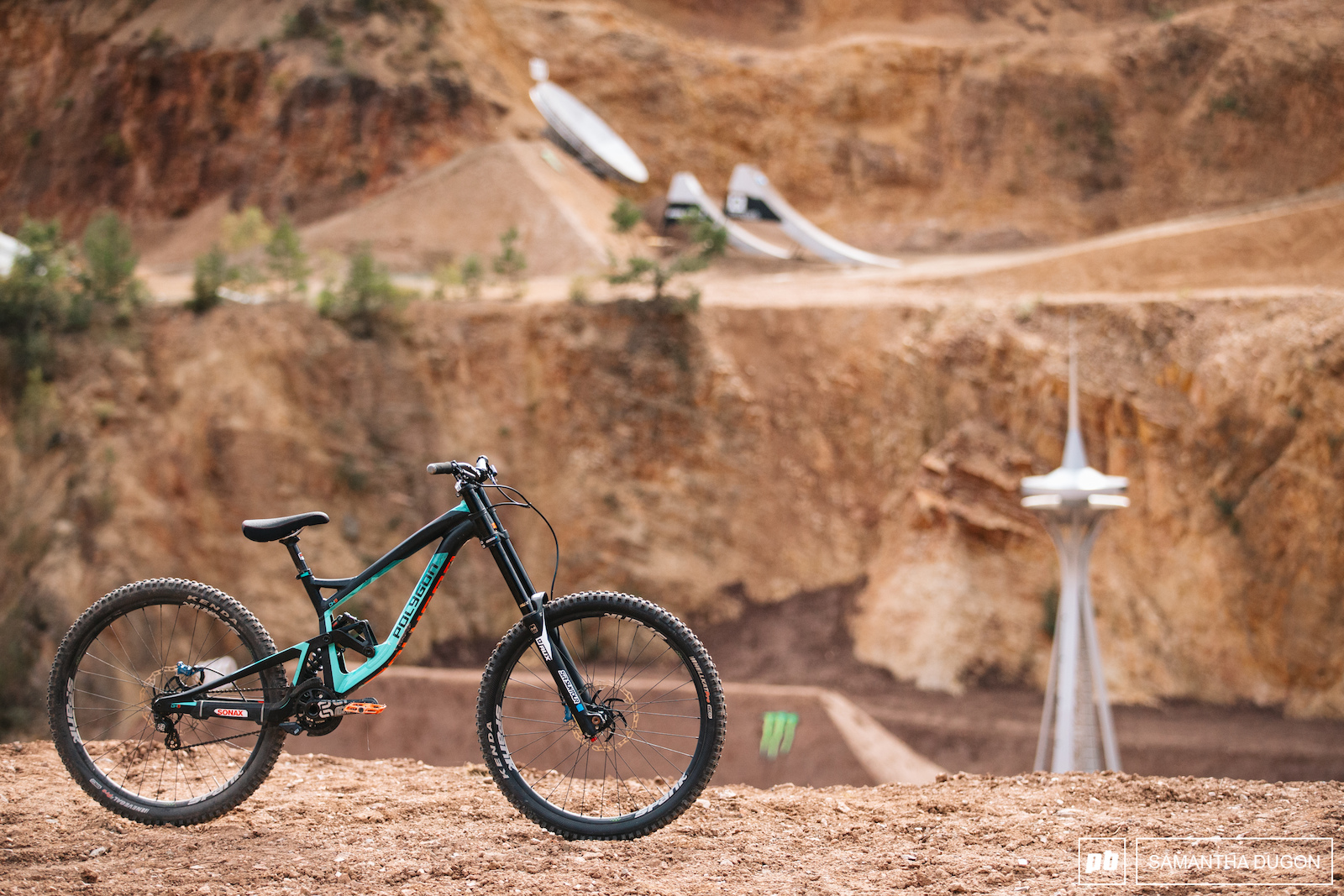 We're at Audi Nines in Birkenfeld, Germany, for the second year at this venue, and caught up with the course builder Sam Reynolds to get the low down on his freeride setup.

Reynolds is a fan of aluminum frames and components: "This is my Polygon DH9 frame with an alloy front because that gives me a bit more confidence than the carbon stuff breaking, and SR Suntour Rux suspension on the front pumped up probably quite hard for a normal person as there’s a lot of compression on the ramps here, so you need that.

I’ve got the Spank Vibrocore wheels which are great because they take a bit of the vibration out of the impact, along with the Spank Spike 800 Vibrocore bars, cut down to about 760mm wide. I know people like to know that."

He's also using high tire pressures for fast rolling and no burping: ''I’ve got 40psi in these Kenda tires with a big, fat knobbly Hellkat up the front, and then more of a fast-rolling enduro tire on the back to keep the back quite light to flick around here on the jumps. I’ve got the Trickstuff Direttissima brakes; they're quite seriously powerful brakes and really cool.'' 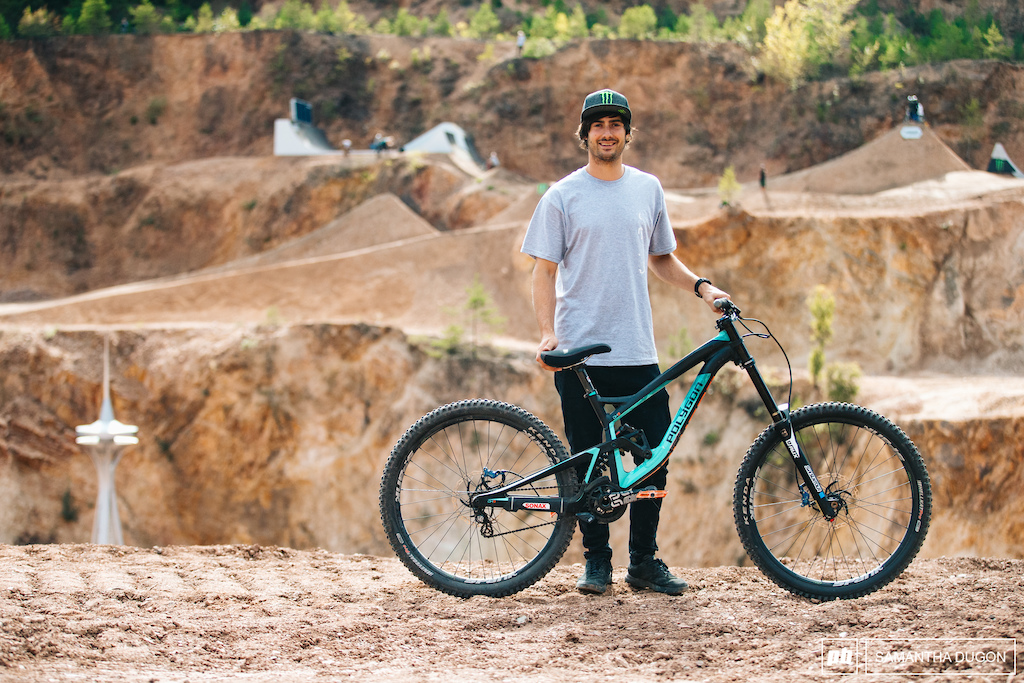 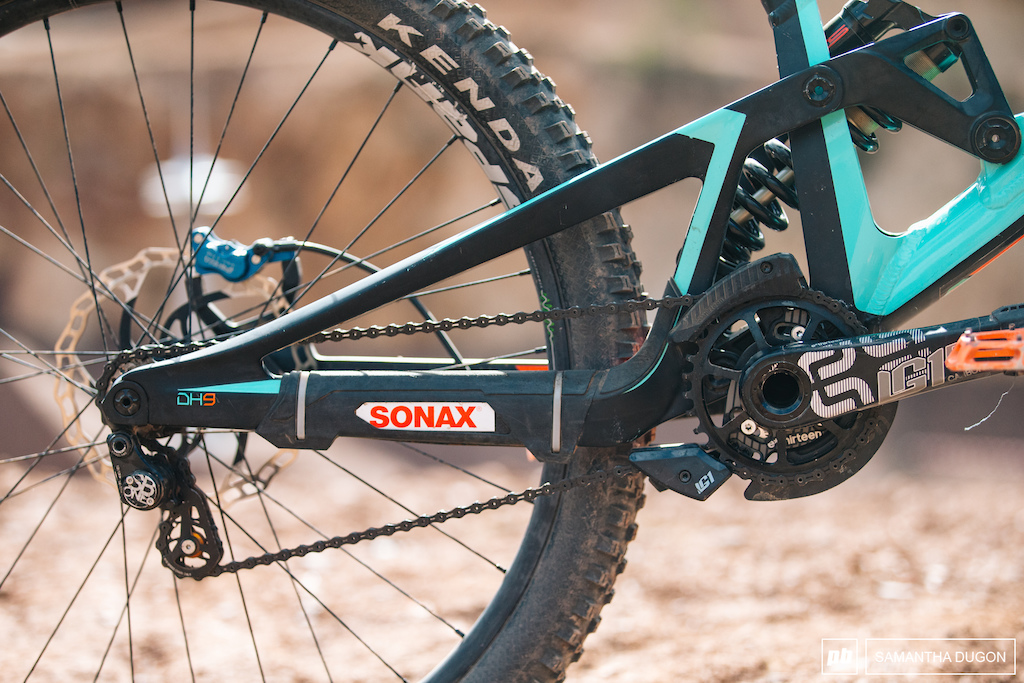 More and more freeriders are ditching derailleurs, and Sam explains why: ''I also don’t have any gears. I run single-speed because it's just nicer up the front, much cleaner with only two cables and you don't really need to pedal anywhere except into the jumps, so it's just a nice heavy gear to crank in. It's also much quieter and a little bit lighter, and simpler as well; if you go to events and stuff breaks, it's easier just to have no gears, and then there's nothing to fix. You don't have to take spares.

Got my signature seat on there, too, which is cool. It's a bit fat which is good for grabs, and it's got that grip on the front and the sides for doing no handers and cool stuff like that.'' 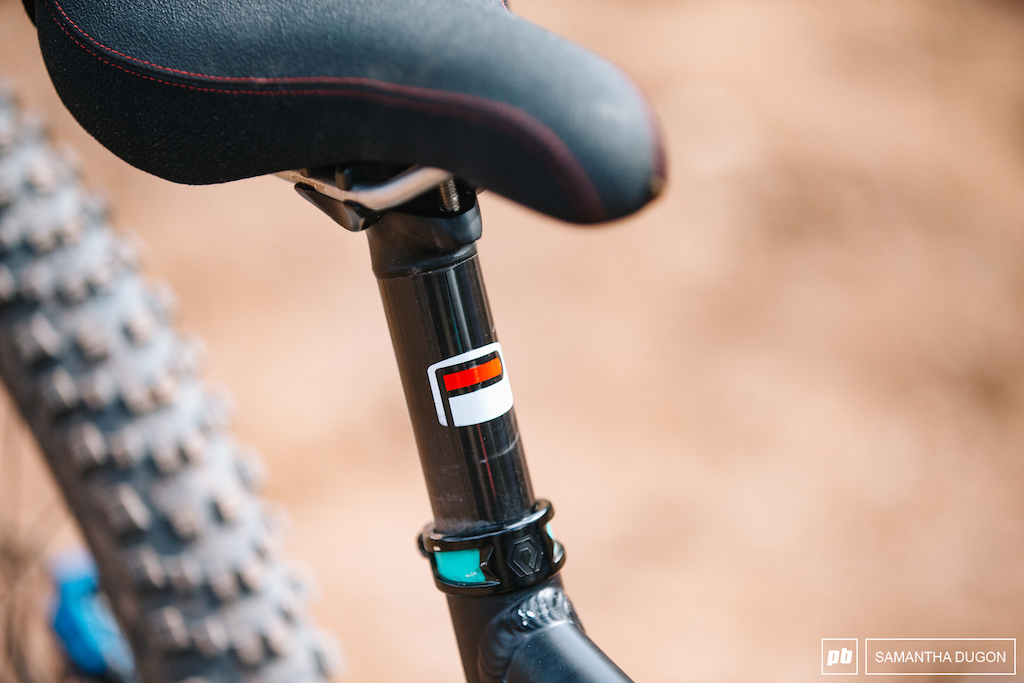 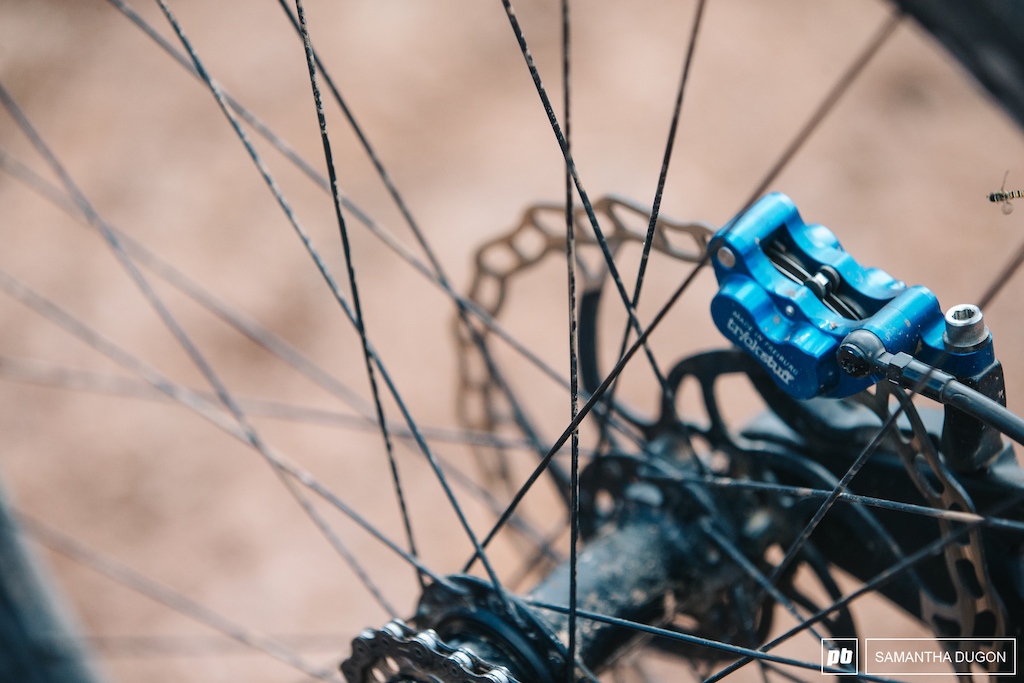 Reynolds' freeride rig is two years old: ''I've actually had it for two years now, but I love it, and it's my favourite bike. I've got a different bike; I've got the Square One set up for downhill, but then just this one which is a bit more playful, less monster truck for the big jumps like this! Oh yeah, I've also got DMR V12 pedals on there. They're orange and cool, which matches my helmet and kit and little bits on the bike. You've gotta look good, haven't you, when you're doing it right?'' 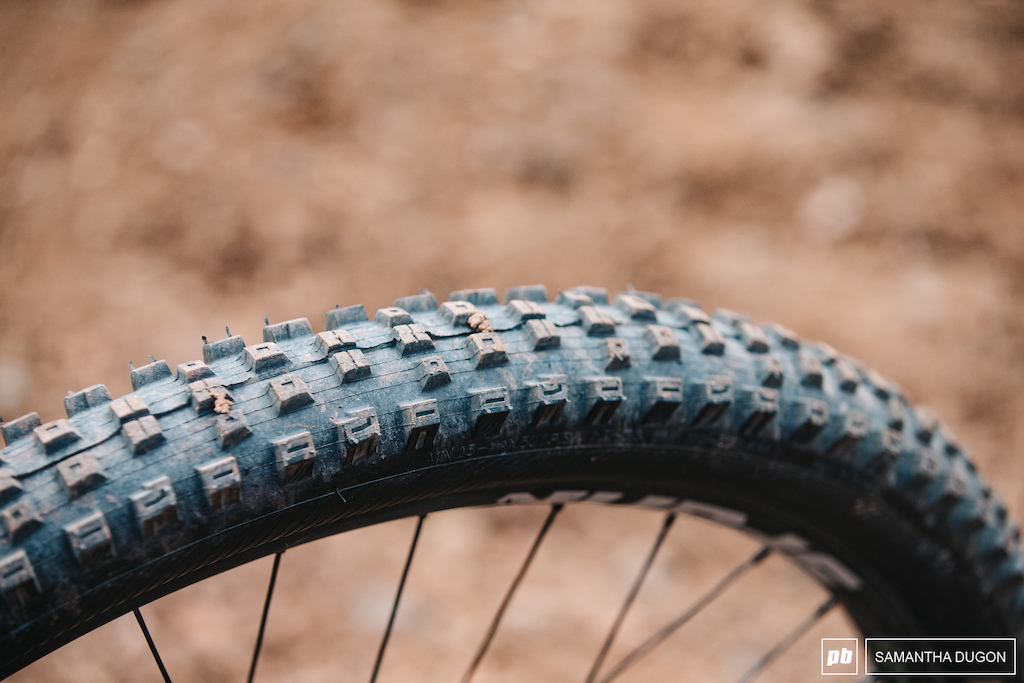 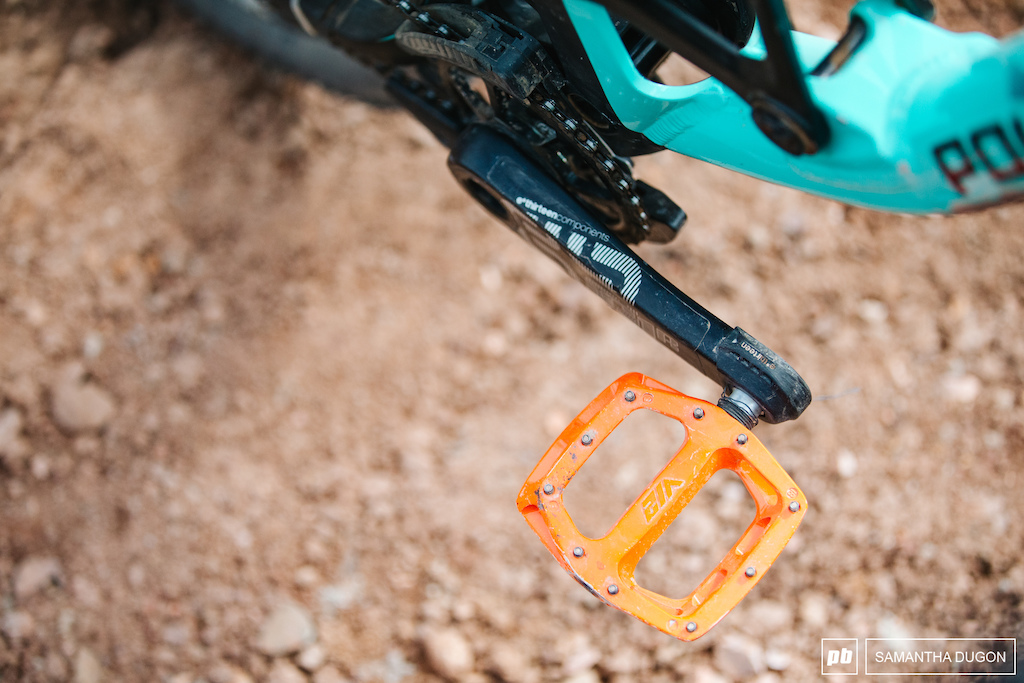 Reynolds is running a Kenda Hellkat upfront and a faster rolling rear tire, along with a set of DMR's V12 pedals.

chriskneeland (Sep 13, 2019 at 5:25)
Curious to know what gear ratio he's running. The speeds he's hitting must be insane into those jumps.

streetkvnt-kvlt (Sep 13, 2019 at 18:26)
I still run gears on my DH bike solely and only because sometimes I have to pedal back up, otherwise singlespeed. Then again I do just leave it in the same gear anyway (36-15).

naptime (Sep 13, 2019 at 23:18)
For me, it's about ride style. I was 3speed on my Bolt play bike because it had all the parts from my old 4Xer. The single speed changed me to finding speed from the terrain an also carrying speed an not wasting it, more flow an smoothness rather than mashing pedals at every opportunity. Wanted to try it on my DH rig. An yeah I'm no racer either!

noahr2011 (Sep 13, 2019 at 10:55)
@BryceBorlick: lets be real hes not actually worried about carbon failing its just his excuse so he dosnt have to ride those hideous new polygons square one dh bikes

loganflores (Sep 14, 2019 at 10:00)
@BryceBorlick: maybe he knows something you don’t know. It’s not like we know how many frames pros go through every season.

chriskneeland (Sep 13, 2019 at 12:26)
@phops: If you ride anything it works very well. The SB One has an adjustable clutch. It's way stronger than a derailleur. I ditched my chainguide for an 11 speed chain and narrow wide ring and haven't dropped a chain yet. And we ride some steep rowdy shit.

Strength is not the problem. The whole reason most DH bikes run gears is because sometimes you need to pedal out of stuff that slows you down, into a feature like a drop. And, if you ride in wet conditions, you will be doing more pedaling.

There is a difference between downhill and freeride, even though both involve gravity as the propulsive force.

chriskneeland (Sep 13, 2019 at 18:17)
@phops: You can still pedal plenty with a single speed. The only problem you'll run into is not enough gear on high speed sprints. But unless you're racing, who needs to high speed sprint. A 36/15 or a 34/12 has plenty of gear in every situation.

The gear you need to crank over slower tech is far lower than what you would need than to pedal for a sprint to add speed to clear a jump.

I think we see downhill differently. You seem to refer to only park riding, where you can definitely get away with single speed. I see it more as general downhill riding on trails that are mostly pointed down, but can feature short flat or uphill sections. A lot of these trails, especially in places like North Shore are DH bike worthy and worth a shuttle rather than a pedal up, and you do want some range on your cassette.

Preachey (Sep 13, 2019 at 4:39)
I wonder what polygon thinks of their rider using a bike they don't make anymore, it can't sell many frames for them

chriskneeland (Sep 13, 2019 at 5:23)
Too many companies are abandoning fun bikes for plow rigs. The industry sucks.

Lookinforit (Sep 13, 2019 at 9:40)
@chriskneeland: why would you ever want to have fun on a bike? Riding is all about going fast, beating the clock, and getting those medals

Seems like one of the few companies that know what's up.

freeridejerk888 (Sep 13, 2019 at 16:56)
@islandforlife: well intense still offers a 27.5 dh/freeride machine as well ad a 29er race sled santa cruz still offers both a lot still do its more in how you set up the suspension than what wheel size as well membe that YT markets there tues as a race machine yet most people ride it as a freeride huck machine

luckynugget (Sep 15, 2019 at 7:36)
@chriskneeland: agree 100%. Companies used to make freeride bikes, slope bikes, race bikes, now they only have trail bikes “to go ultra fast”. If they do still make a dh bike, its set up for racing and staying low to the ground.

mdpetrie (Sep 15, 2019 at 16:53)
Also consider the Rohloff DH tensioner . It doesn't have a clutch, which means less impact on your suspension. I actually had to up the compression on my rear shock - it was a bit of an adjustment to get used to the more active suspension. With the Rohloff, the chain is still held tight but there's lots of chain slap - you'd want to wrap your stays pretty well.

novajustin (Sep 13, 2019 at 8:56)
so much extra brake host just hanging out up front. that front brake hose looks atrocious.

leon-forfar (Sep 13, 2019 at 14:46)
@novajustin: Yup, I was expanding that you normally have to pull your bars further back than where they normally are and align them with your frame, hence why having longer front brake line can be nice.

jorgeposada (Sep 13, 2019 at 4:34)
Shocked people are soo nooob they have never tried this or been forced to try it on a road trip. Yes try it, you like it, molto bene!