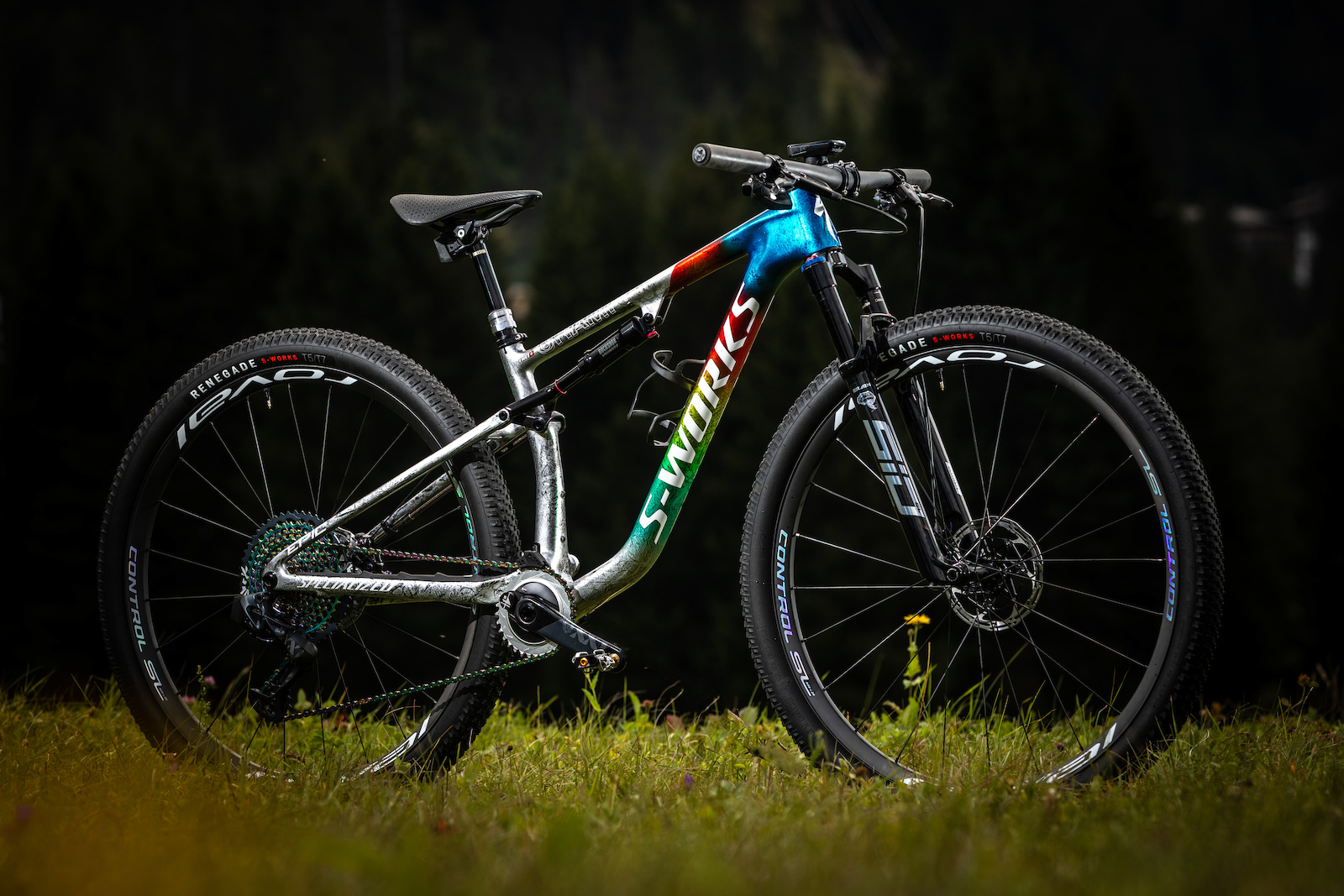 Sina Frei (Switzerland) and Christopher Blevins (United States) etched their names in the history books when they became the first-ever XCC World Champions at the 2021 MTB World Championships in Val di Sole, Italy and they both did it on the same bike. Although they ride for different teams, Frei on the Specialized Factory team and Blevins on the Trinity development squad, the Epic was their ride of choice.

In fact, it has been a successful year for the Epic all-around. Frei arrived at the World Championships fresh off her silver medal at the Olympic games, while Blevins would go on to win three medals at the Worlds with a silver medal in the team relay and a bronze medal in the E-Bike race added to his XCC win. This is a first-ever for any athlete at a World Championship MTB event and made him the first American man to win in a cross-country event since John Tomac in 1991.

To celebrate the success of these athletes and their historic achievements, Specialized have created custom-painted S-Works Epic framesets, which they will ride during their year in the World Champion jerseys. Additionally, it will produce 50 limited edition replica framesets for anyone to purchase in early October. A portion of all proceeds from the frame sales will be going to the Outride Foundation, an organization dedicated to providing evidence-based cycling interventions to improve social, emotional, and cognitive health.

Let's get into all the details of Sina's ride: 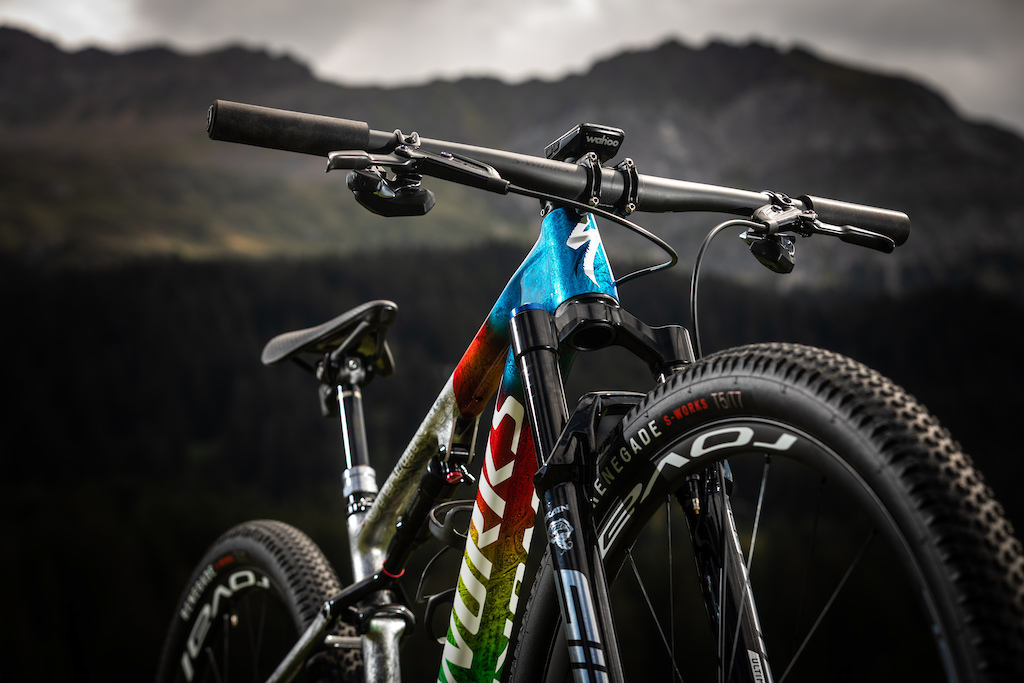 As with any World Champs bike worth its salt, the UCI rainbow forms the main insignia on this frame. 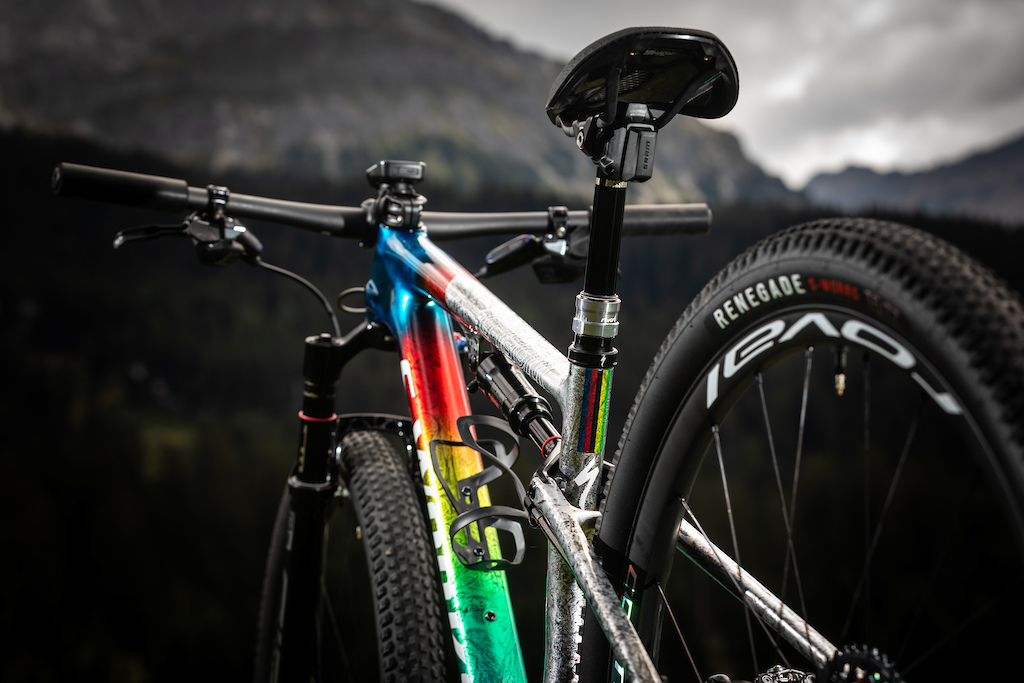 This is the second World Champs frame Specialized has produced this year after Jordan Sarrou's Epic from earlier in the year and it has definitely improved the recipe for Sina's. 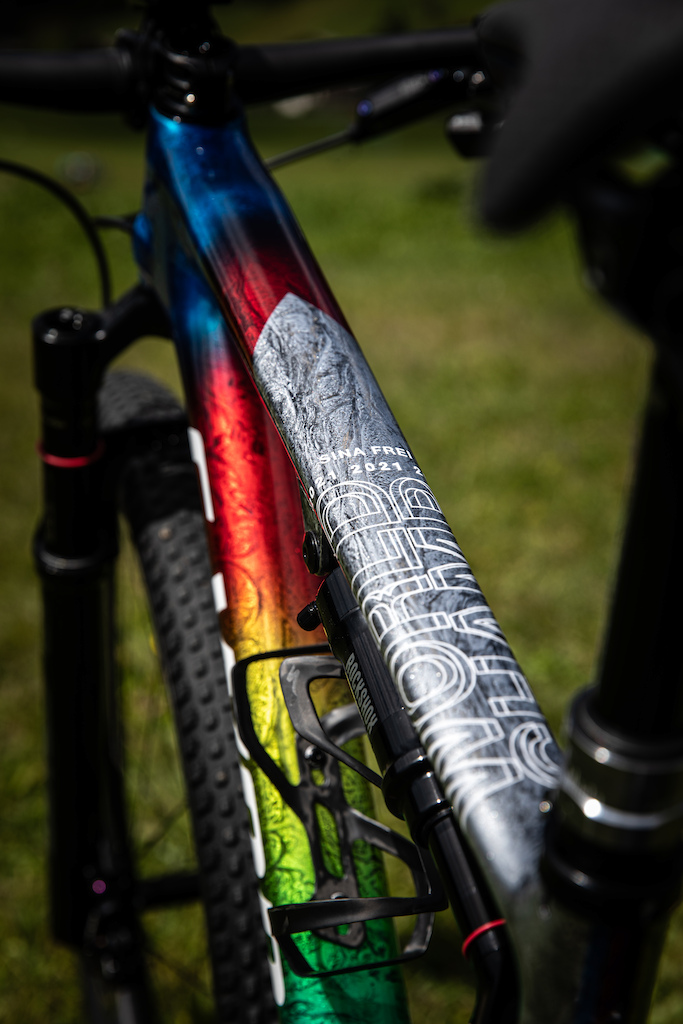 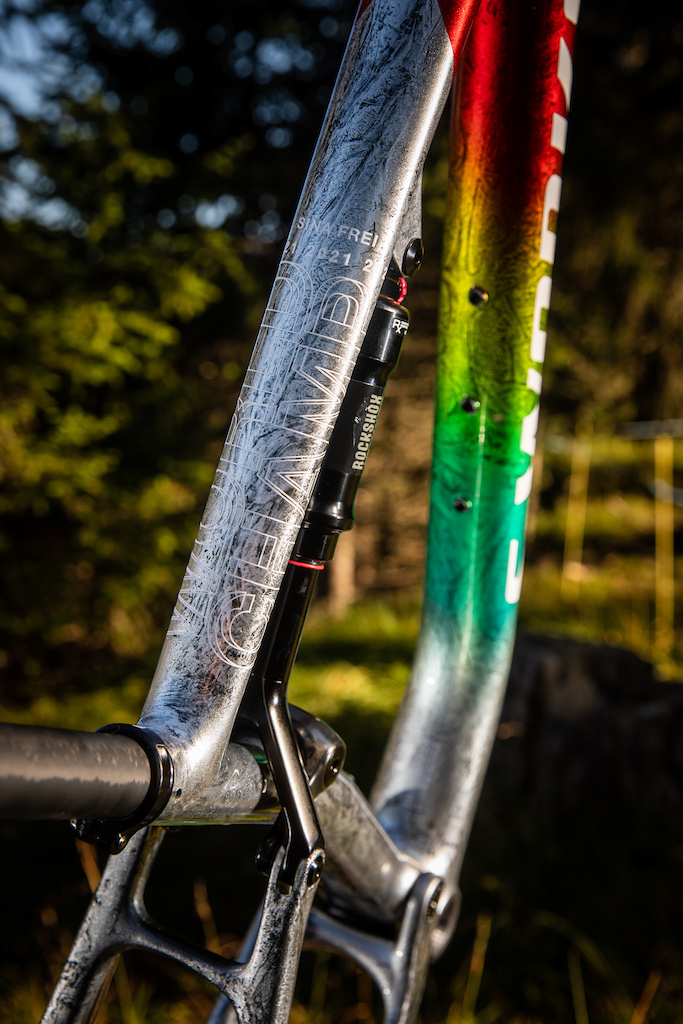 Behind the rainbow is a brushed silver rear end with white inscriptions. 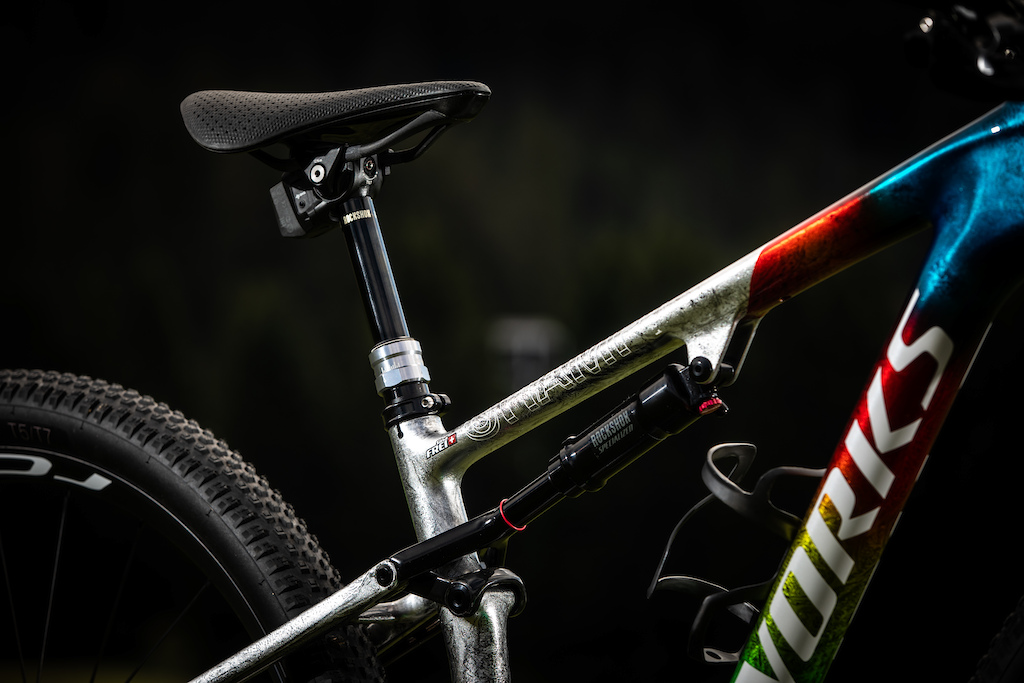 The rear suspension is a collaboration between Specialized and RockShox for the pedal-assisting Brain system. 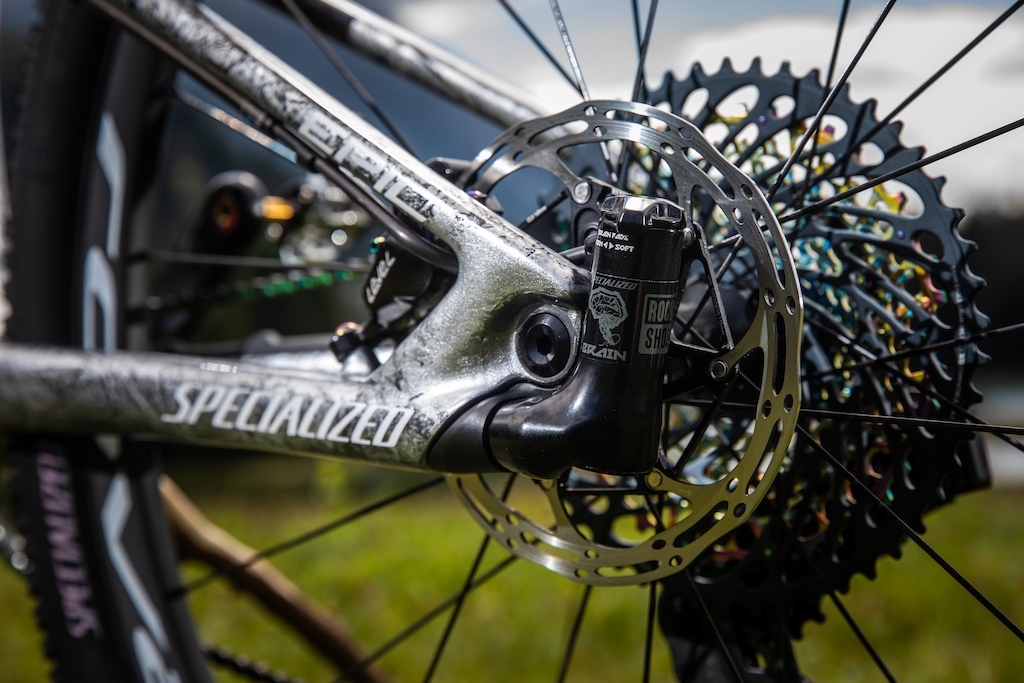 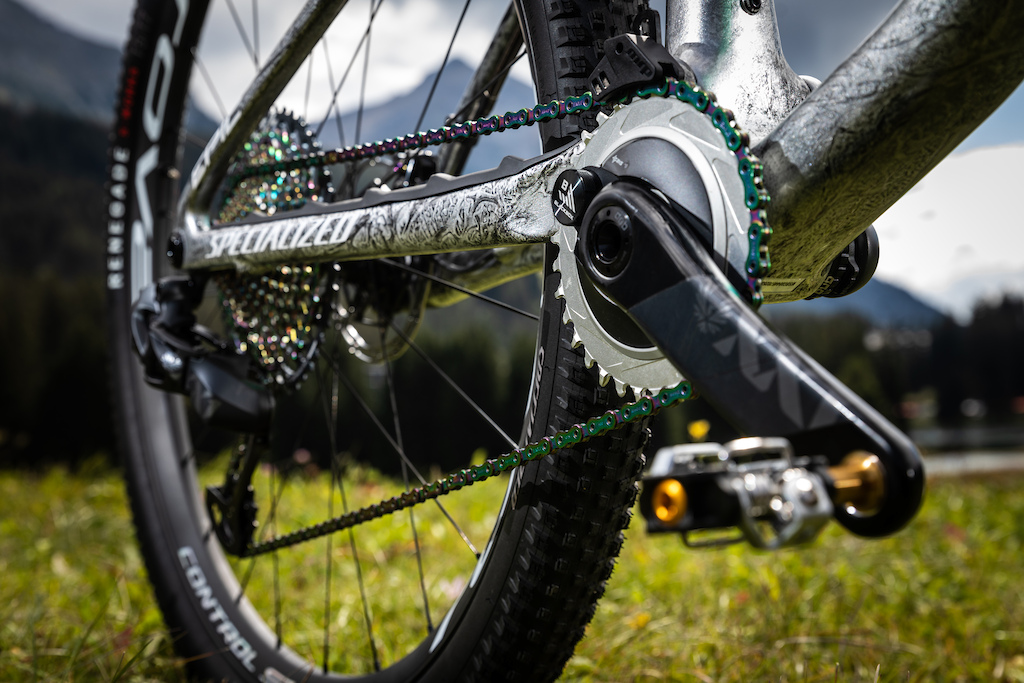 This Rockshox/Quarq power meter chainring is still being tested by a lot of top XC athletes. 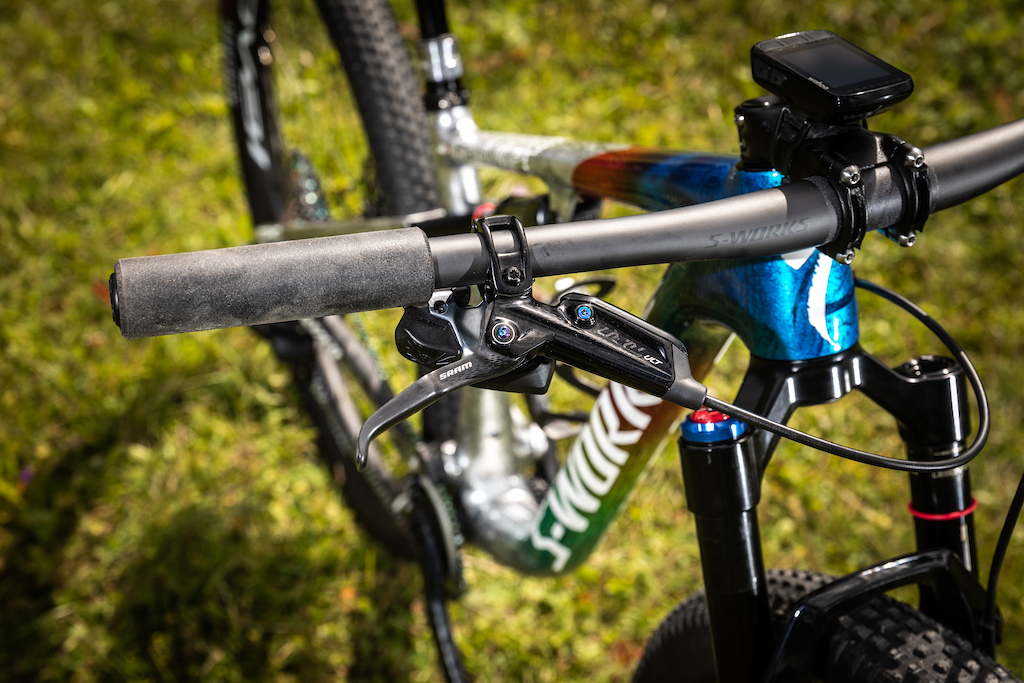 Specialized's S-Works components make up the cockpit along with some lightweight foam grips. Unlike her gold-medal-winning compatriot, Frei races with a computer from Wahoo. 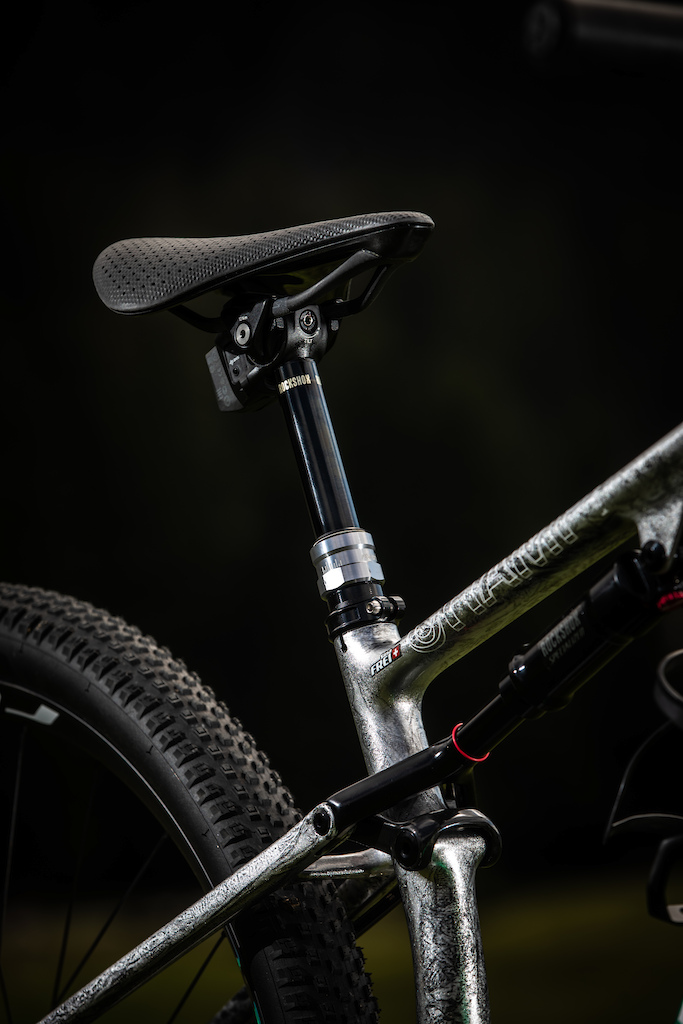 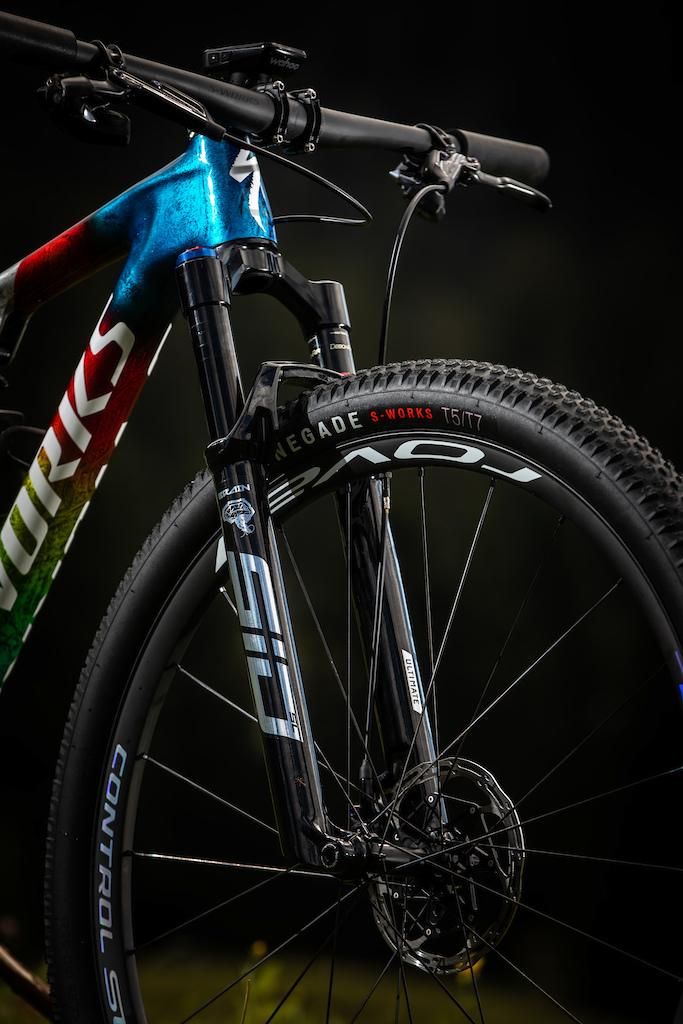 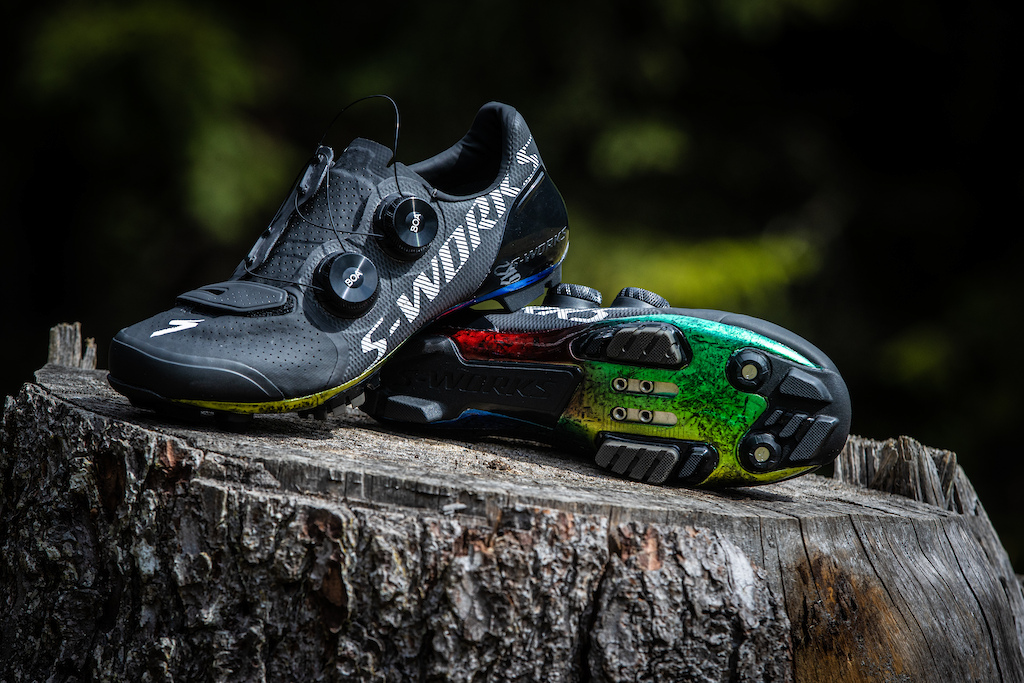 Matching shoes go along with the frame and jersey 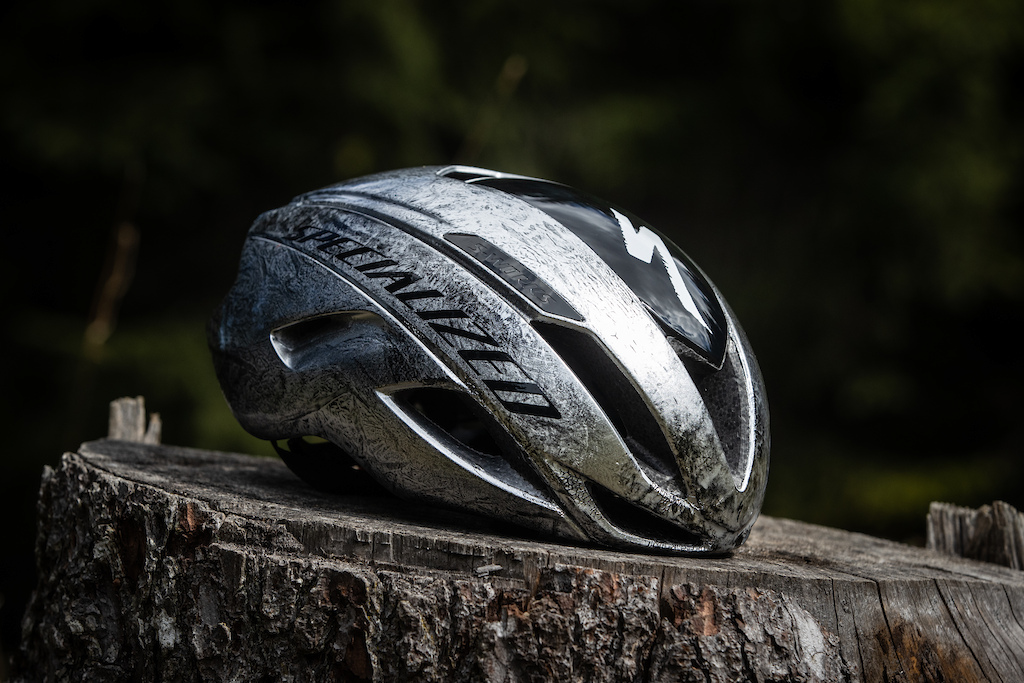 And of course a helmet completes the look.

jspier (Sep 7, 2021 at 14:18)
This feels a bit more like a press release than a bike check - rider height/weight and bike set-up stats are the difference. I'm still glad to have the pics, as it's an amazing paint job and deserves some press, but not much to add here.

It also feels like a bit of a stretch to say Blevins was on the same bike for his win. Sure everything in Specialized catalogue under 130mm travel is called an Epic, but he rode a hardtail and she rode the full-sus - that's pretty different.

Man, if you believe that you'll believe anything

The 50 their selling with a portion of the proceeds going to charity is cool in one way and rubs me the wrong way where the Rainbow Stripes are concerned.
IMPO, they can't be bought and I'd never wear/ride anything with them on it, some things just have to be earned.

iamamodel (Sep 7, 2021 at 17:51)
I agree, should be earned, but with the fade of one colour to the other it doesn't look exactly like the Rainbow Stripes. More like 'inspired'.

emery033 (Sep 7, 2021 at 15:02)
Was surprised Evie was not on a fully decked out Trek. They (Trek) seems totally on top of the immediate over the top paint jobs. Logistics maybe?

SpecSRAM (Sep 7, 2021 at 15:14)
True! However, Specialized has a long track history of very unique and eye-catching paint jobs. Check out some of their old Troy Lee Designs collabs....particularly the 2013 S-Works Demo, the 2014 S-Works Enduro, and the 2015 S-Works Stumpjumper. Those models had some pretty neat designs!

tauren58 (Sep 7, 2021 at 14:11)
Totally agree. One of the most interesting things about a cross country bike, from an enduro style rider, is how freaking late these bags are. PB please always post its weight:-)

Madfella (Sep 8, 2021 at 15:28)
Weights are only posted for lightest in class. Otherwise is not a good look for the manufacturer

SpecSRAM (Sep 7, 2021 at 14:59)
Usually it's some sort of contact process where the painter applies some paint to an applicator - such as a roller, a leaf, or something else with a unique texture....then they apply that applicator to the frame surface. I've seen people use some pretty interesting things upon applying a unique dimension to a paint job....one of which was someone using some old textured Victorian wallpaper and the end result was fantastic.

Bro-LanDog (Sep 7, 2021 at 16:49)
I use to airbrush quite a bit back in the day, to get a marbleing effect I'd crumple up a plastic bag and use the creases and ridges to apply contrasting paint to the base that adds depth and texture. I'd be willing to bet something similar was done here.

pourquois-pas (Sep 8, 2021 at 8:31)
@Bro-LanDog: It's one of my fav paint effects. It looks super slick on this frame the way it shows through the colors!

traildad69 (Sep 7, 2021 at 15:11)
I would love to see a post discussing the various aspects of the XC world such as Quarq power meters and live valve suspension. Especially as the world of e-assist bikes and ... analog bikes(?) become eerily more similar.

kazwei (Sep 8, 2021 at 0:25)
I think she can ride on that bike but what you can't do is wearing the stripes on your jersey. If i remember correctly is that Avancini once wore the stripes as marathon wc in a xco race and got some trouble for that. I think Camille Balanche was still riding the same wc inspired paintjob on her bike in Lenzerheide as before when she was wc

Willemhc (Sep 8, 2021 at 5:21)
I kinda think it would be lame to ride this bike in an XCO. Winnin this new XCC WC is a hell of an accomplishment, but it's not AS cool as winning the full blown XCO. Riding the rainbow bike during XCO feels like a minor disrespect to the actual XCO world champ. Anything rainbow colored in the XCO should be reserved to honor the current XCO world champ.

knutspeed (Sep 8, 2021 at 2:52)
I'd like to know why most of the Specialized riders were on Renegades, while Jenny Rissveds seems to always run Fast Traks. Doesn't seem to slow down Jenny much!

PapaStone (Sep 8, 2021 at 3:42)
I was wondering the same thing. If you watched the XCO race, Jenny did wash out her front wheel in a gravely/sandy little section. It made me wonder since I would "think" the Fast Trak would have more cornering grip...maybe not??

xxinsert-name-herexx (Sep 7, 2021 at 14:02)
Since they didn’t publish a weight figure, anyone know how heavy this bike would be? That Brain system and full AXS must add some heft.

SpecSRAM (Sep 7, 2021 at 14:19)
It's not heavy....not at all. These bikes - depending on frame size and other small factors, come in around the low 20lb range. Other sites are listing the S-Works and SW Evo models around 21.5 to 23.5 pounds. The AXS components definitely aren't as heavy as you might think and the Specialized Brain tech is both light and incredibly reliable.

brubou (Sep 7, 2021 at 18:19)
My large epic pro, with powermeter and a KS carbon dropper post is below 22lbs. The pro model use the 11m carbon and aluminum linkage. This s-works should be below 21lbs.

pedalt0themedal (Sep 7, 2021 at 17:05)
What happened to the Magura brakes and Rotor cranksets on Spesh team bikes?

mrkkbb (Sep 8, 2021 at 5:05)
Shame, a few hits from the controllers on the top tube and the bike is a goner. Honestly, how hard is it for Specialized to implement a knock block?