Bike Check: The Full Suspension Bike Made From Plywood 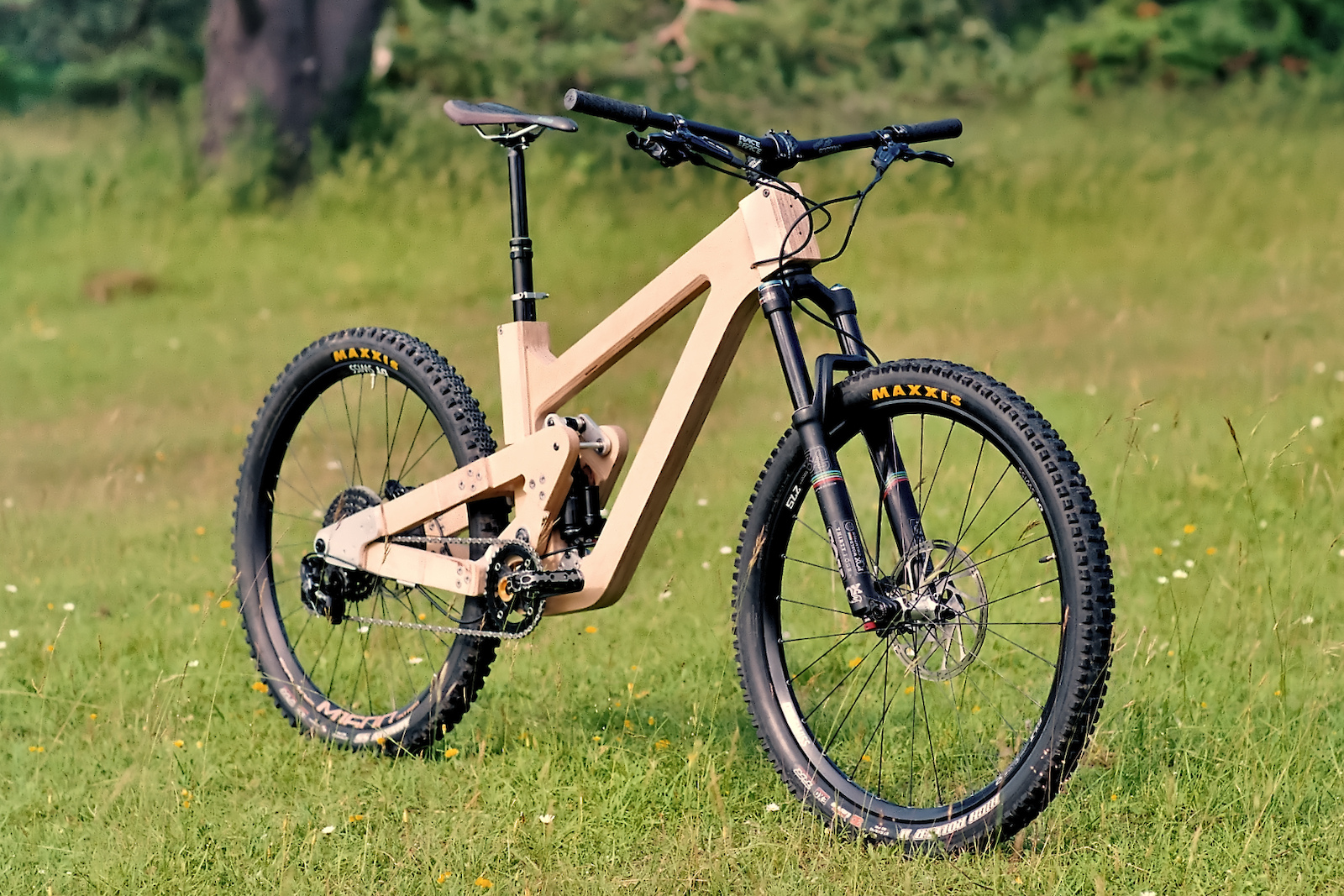 BIKE CHECK
Bene Mack's
Plywood Bike
Photography by Bene Mack
Our friend Alex at the European Bike Project has been featuring a collection of wooden bikes this week with everything from drop bar speed machines to the Earthbound high pivot enduro bamboo bike featured. There have been a few projects on there that really caught our eye so we decided to take a couple and do a deep dive on the tech and builders behind them.

First up is a plywood, linkage-driven, single-pivot from a German builder called Bene Mack. Bene studied product design and also took a six-month internship in the design department of a German bike company, so he decided to take those skills and build himself a bike for the first time. The bike was his chance to try out some ideas he had been working on using Fusion 360 and also try out the boundary-pushing geometry that is being tested by some bike brands. 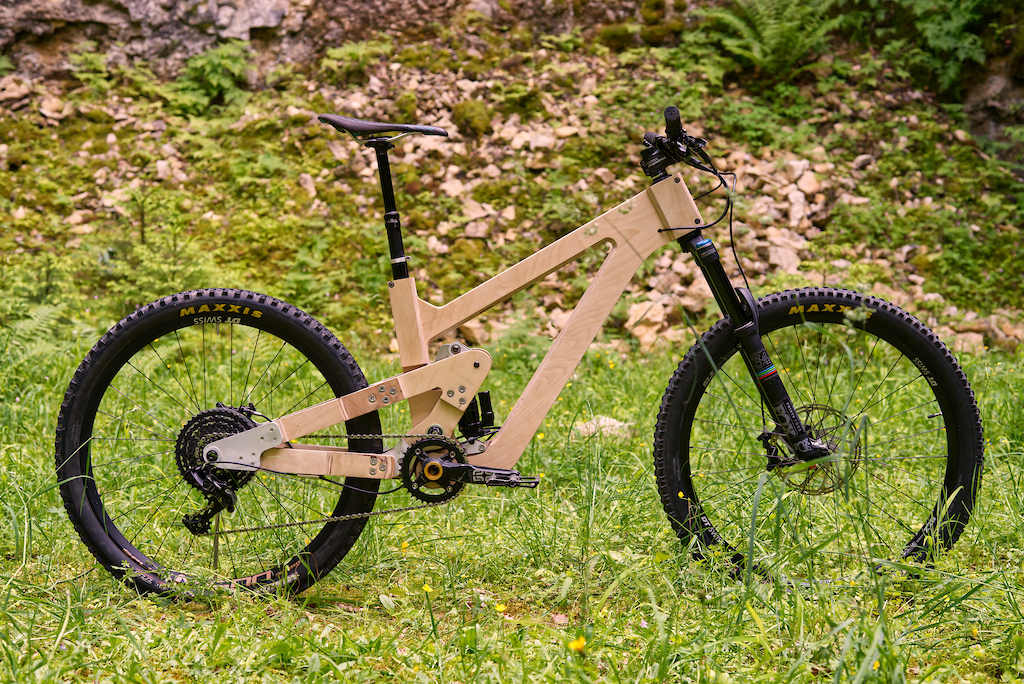 Details
Frame Material: Plywood / aluminum
Wheelsize: 27.5"
Rear travel: 154mm
Suspension Design: Linkage driven single pivot
Head Tube Angle: 63°
Seat Tube Angle: 80° (79° at 25% sag)
Reach: 484mm
Weight: 18kg (9kg frame)
More info: @bene_mack
So, to get the most obvious question out of the way first, why plywood? Well for Bene, it was simply a matter of practicality. Bene says, "Since I never welded before and without any access to the necessary facilities, I decided to build the frame out of plywood. The frame was designed to be built from 2D parts, which gives the bike that unique look." Thankfully he owns a jigsaw, a belt sander, a router, and a drill press in a small workshop and a friend owns a lathe, meaning he could create the bike with the required level of precision. 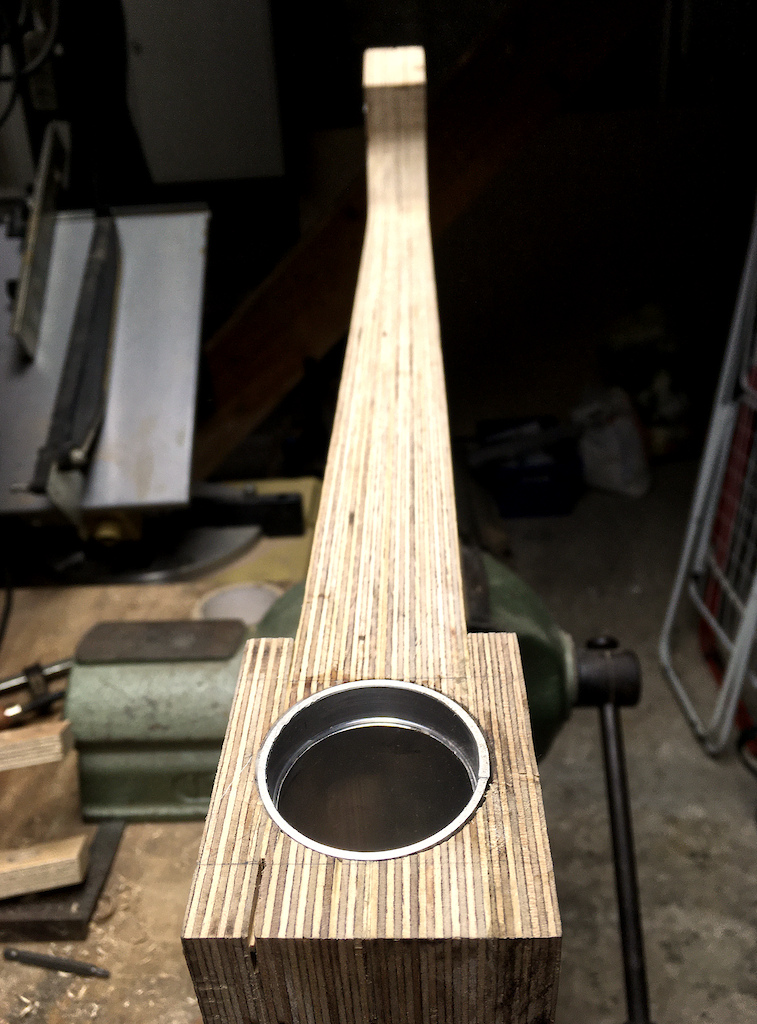 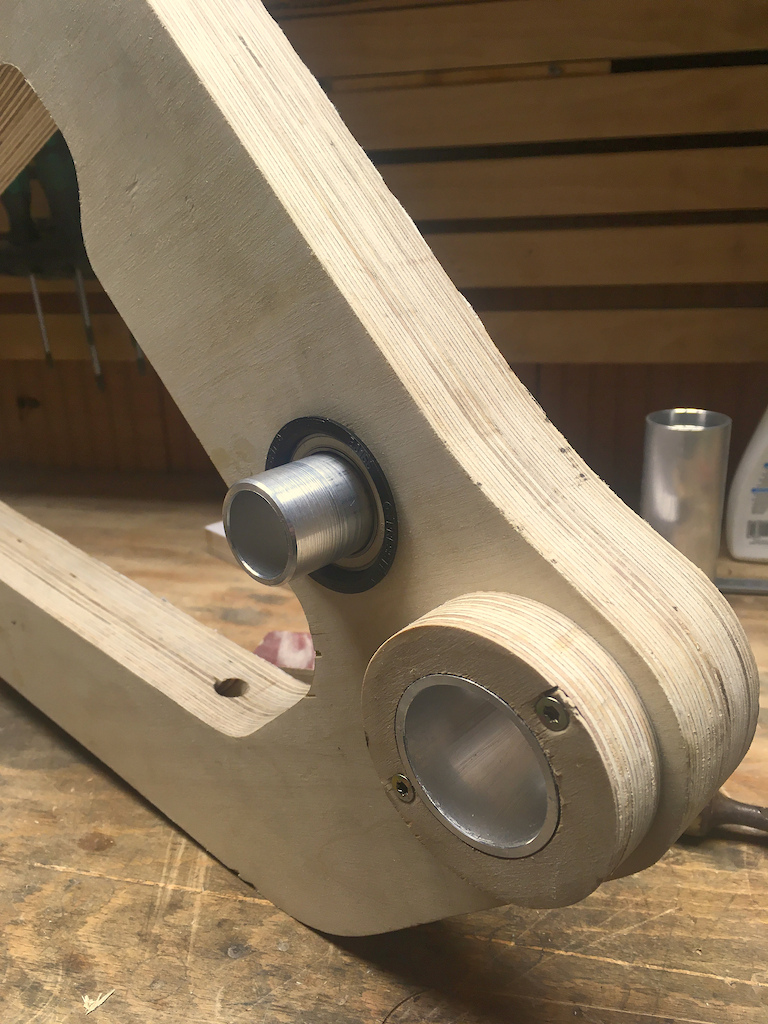 Ensuring the headtube didn't snap was one of the biggest challenges of the project for Bene.
After around 500km of riding on the bike, Bene is starting to pick out some interesting performance benefits to wood too. He says, "It's the quietest bike you can imagine. And the feeling of extra damping that wood provides is something I could get used to." However, he's unlikely to ever suggest that plywood bikes are the future. Apparently, the front triangle flexes under hard pedaling and although he's had no issues with it yet, he says he'll never trust the headtube 100%. 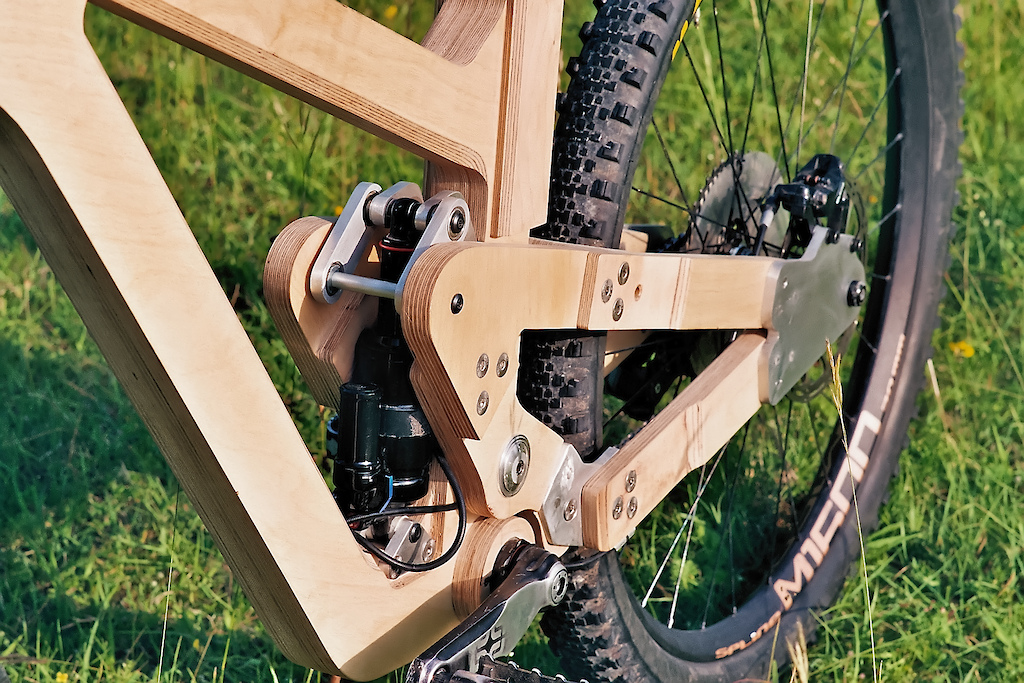 36 M8 bolts in the rear triangle and a solid wood construction contribute to the 9kg frame weight. 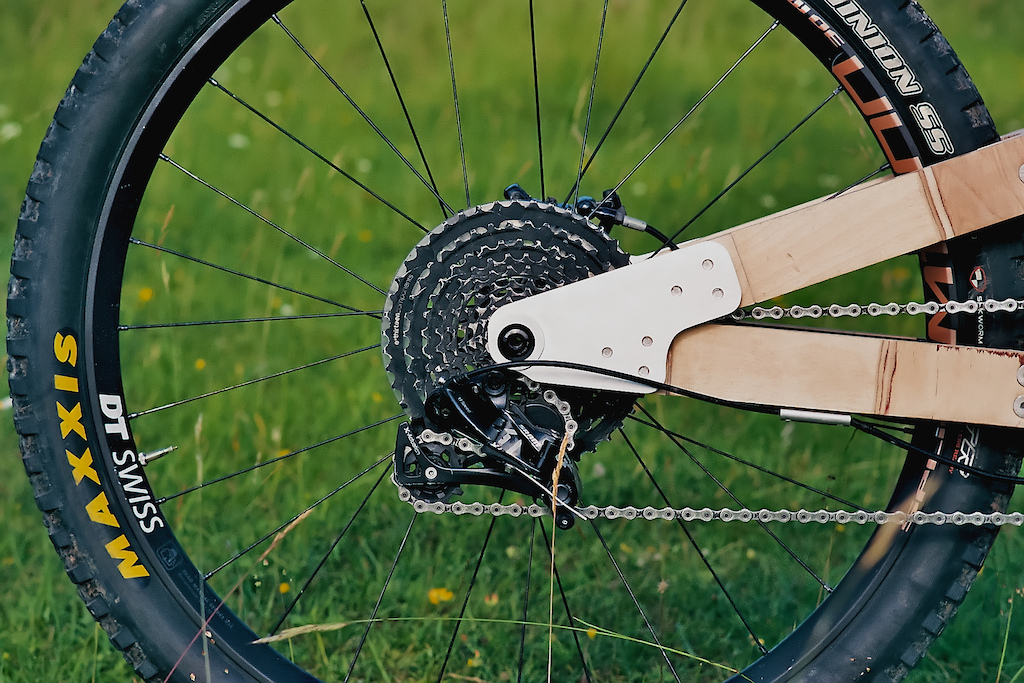 Some aluminum parts are used to help the construction come to life.
Bene decided to build the bike around a linkage-driven, single-pivot as it was a design he liked while also allowing him to increase the stiffness in the rear triangle. The system offers high anti-squat values to help you get the 9kg frame to the top of the hill and a progressive leverage ratio. Bene thinks it would work better with a coil shock but he just built this bike with spare parts he had lying around. 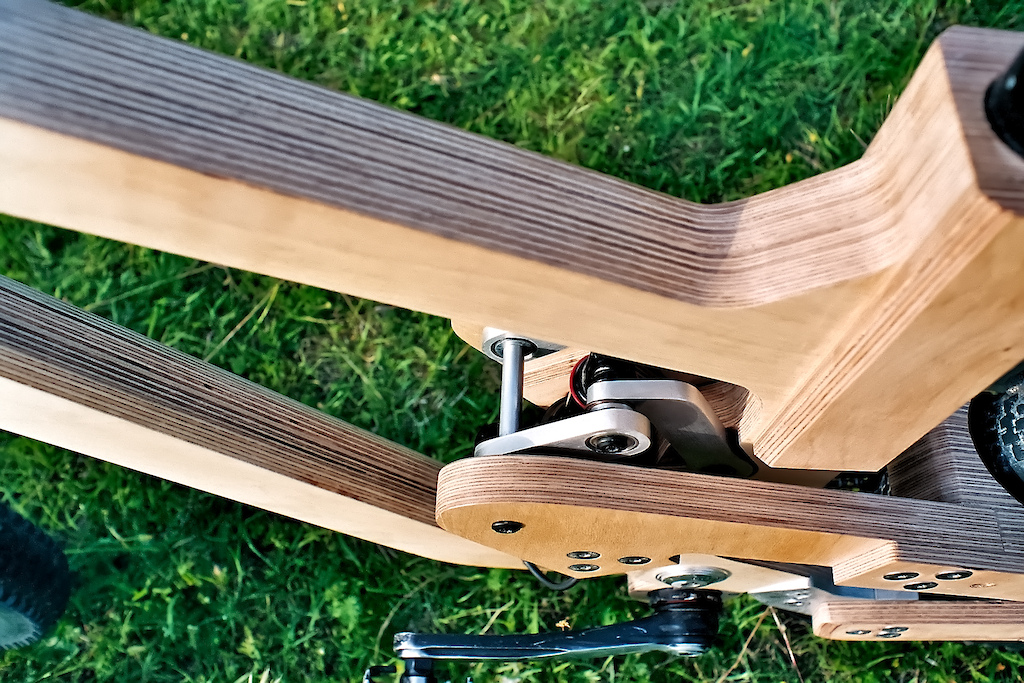 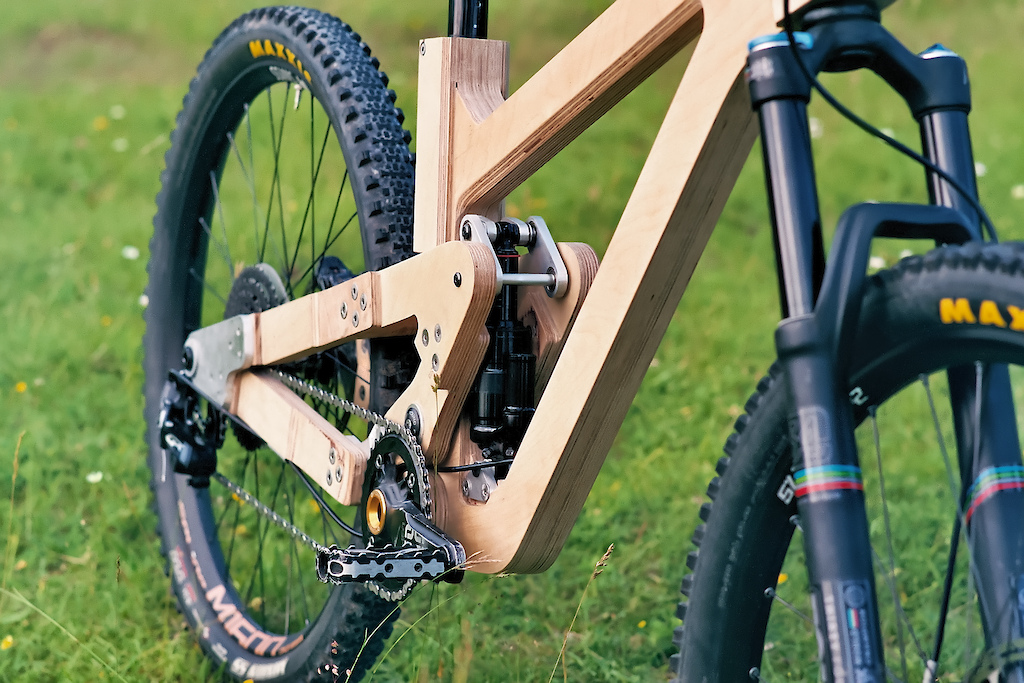 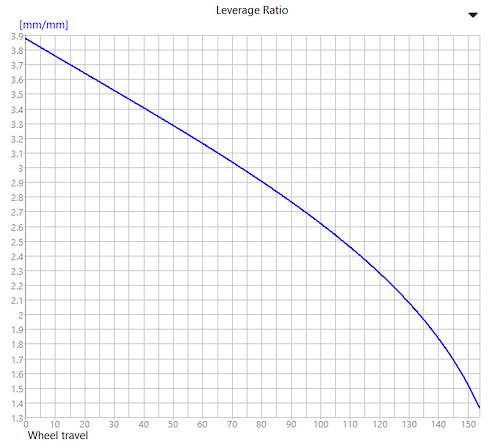 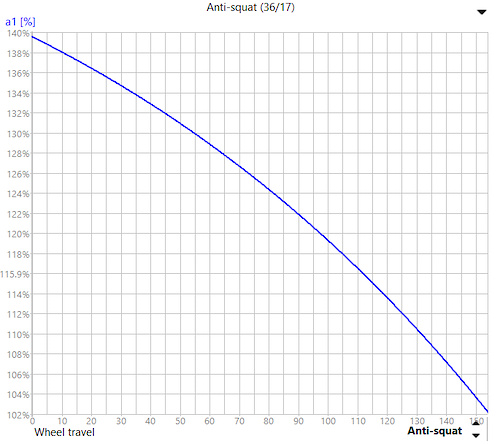 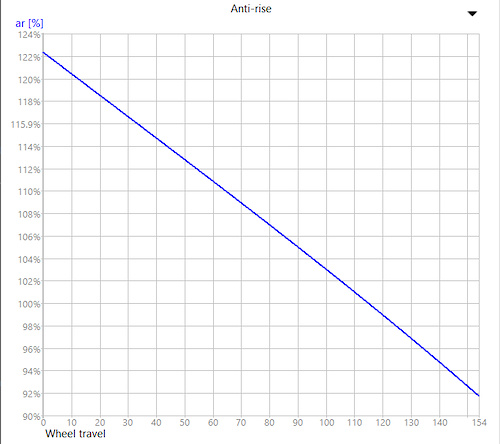 The next steps for Bene are riding, testing, and modifying the bike, and possibly developing a steel version. If the results are promising Bene could consider making a commercial project out of it too. If you want to follow his progress, follow him on Instagram, here. 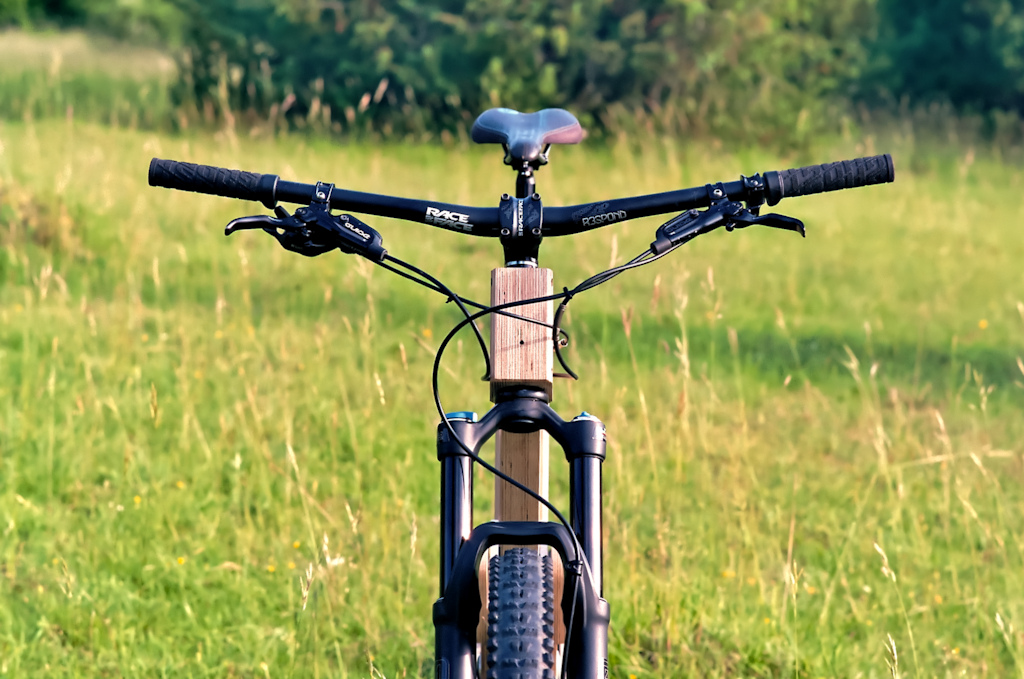 notsosikmik (Jul 16, 2021 at 11:14)
I think that is maybe the point? Every one wants to have the most baller bike so logically this was the next step.

hi-dr-nick (Jul 16, 2021 at 11:31)
@kkse: yeah people finally figured out that paying 50k over asking price for a house or build isn’t going to keep the mortgage cheap. Bunch of sheep.

Ref bamboo bikes from outside

Wilm (Jul 16, 2021 at 13:50)
That’s kicked off my investigation into making one from light cured dental composites.

HuckingCanuck (Jul 17, 2021 at 23:11)
@mixmastamikal: I hear you! Unfortunately with the price of the frame being so high you get pretty poor components. Not a fan of the Bike-Oak dropper, splinters for days!

rtclark (Jul 18, 2021 at 20:04)
I get your joke though lumber has already fallen 75% from the highs. Only reason price went that high is because of futures traders.

rtbiss (Jul 20, 2021 at 10:50)
@rtclark: An added problem is youcan't even find a good used bandsaw to mill your own. Wood Mizers (proudly North American made) are a year behind on orders and every second hobbiest is hoarding off cuts like they are an investment. Boom Bust in the forestry industry is not new. The problem for some of this goes quite a bit beyond the futures traders. Fallers are happy to take Covid Relief payments rather than constantly watch out for wido-makers dropping from the snag 30metres above their heads.And,,, the average age of log scalers is now over 60 on the West Coast. The kids can't do it because it needs the "Art" as well as those amazing hand held devices and that takes time to aquire. The lack of scalers is very real and since the companies are trying to cut everything posible, as fast as possible even with the fire ratings well into the extreme (make hay/sticks while the sun shines) there is avery real wall to the ability to ramp up wood production. No Scalers,,, the saws stop, the trucks sit and the mills cry for feedstock. Kinda like the story of - "for want of a horseshoe nail an empire fell" The traders who saw this coming make plastic money and the late arrivals get shaven.

gaberoc (Jul 16, 2021 at 11:55)
I'd ride it fir sure. I bet it'd fit great on my trunk rack. A bit of thrashing would root out any issue with headtube. Given the appearance I'm willing to go out on a limb and say the design isn't all bark and no bite. I'm sure after all these puns someone will log a complaint.

commental (Jul 16, 2021 at 12:25)
He's definitely going against the grain using this material. I reckon he must've been three sheets to the wind when he came up with the design.

leifgren (Jul 16, 2021 at 14:20)
I think it would be sycamore wooden bike builders sprouted up. I can just imagine milling about a shop, pining over the latest frame I saw.

PocoBoho (Jul 17, 2021 at 9:24)
Wonder if the puns were the icing on the cake during negotiations between Outside and PB.

Someoldfart (Jul 17, 2021 at 11:46)
Yet another splinter group making something different.

allmountainrider81 (Jul 17, 2021 at 14:38)
Whoever planted the seed for this idea was definitely thinking out side the (wooden) box.

It’s a little rough,
wood I ride this plane frame bike?
I’m on the fence here.

westcoastatheart (Jul 16, 2021 at 11:58)
I cedar what you did there, and fir what it's worth I think the decals would be a real birch to keep clean. Truthfully, I would always be scared of the headtube snapping and going ash over teakettle.

srsiri23w (Jul 16, 2021 at 11:03)
This is totally unrelated but has anyone noticed there is no Pinkbike podcast this week? I can't help but think the news on Wednesday had something to do with the episode being released on Thursday which they typically do.

pisgahgnar (Jul 16, 2021 at 11:08)
@brianpark replied to a comment in another thread. "we were just busy at Field Test and being yelled at on the internet. Podcast will be back next week."

Almostredbike (Jul 16, 2021 at 12:28)
@PTyliszczak: it’s weird eh, the comments and the associated readers are what makes Pinkbike, but they actually loath us.

bh406 (Jul 16, 2021 at 16:35)
@mikekazimer: If worse comes to worse and pinkbike cuts the podcast, I better see an independent Mike vs Mike mountain bike podcast

AllMountin (Jul 16, 2021 at 11:09)
I was interested until I saw it was part aluminum. Riders are never impressed with less than full wood.

big-red (Jul 16, 2021 at 13:36)
Everybody in here making jokes or questioning the practicality of it. It's explicitly stated in the article that it's a prototyping process for geo and suspension. I'd say this is an excellent and economical for a one-person operation to ease into the business without having to invest too much up front.

theshortestcharles (Jul 16, 2021 at 11:40)
I definitely agree that it's more suited to a coil shock...with 65% progression and the shape of the LR I'd guess the end of the travel is practically unusable if you set the bike to industry 'normal' sag percentages, especially with the natural end-stroke ramp of an air shock. I'm curious how it would ride with around 35-40% sag, since the anti-squat is still a fair bit above 100%.

WishIWazFaster (Jul 16, 2021 at 22:50)
Respect for the creativity and the follow through on the idea. I guess Bene has better things to do, but I'd love to take a sander to that frame and give it a nicer shape, you could probably knock off a kilo of unnecessary weight and make it look a whole lot better.

Longroadtonowhere (Jul 16, 2021 at 11:30)
As a woodworker by trade, i can’t even say I’m that stoked on this. Wish he would have atleast taken a disk shaper to that headtube.

HuckingCanuck (Jul 16, 2021 at 17:57)
Hey where did you get the plywood bike? Wooden you like to know. I’m only here for the comments so I barely looked at the article however at first glance it looked like the designer nailed it!

NCKingsting (Jul 20, 2021 at 6:51)
If you want to see the job done right, check out Renovo bikes XC MTB. www.puretimber.com/renovo-bikes Or the link to the article in Single Tracks about the bike introduced at Sea Otter back in 2018 www.singletracks.com/mtb-gear/wooden-29er-renovo-can-built-21lbs Renovo had a long history of building very high end road frames that were stunningly beautiful. As the owner of the Bad Ash 2, frame #2 of 3, I can tell you the dampening characteristics of wood are real and significantly improve the ride of a hard tail. For those of you who played baseball, think about the difference between a wood and aluminum bat. Very cool bikes and great to be “at one” with the woods!

muddytreker (Jul 17, 2021 at 9:04)
You could sandwich layers of alloy and home made micarta, choosing a siutably strong textile, 2D alloy plates for stronger juction points, no welding, no heated pressure mould, just a basic press and wood working tools.

CSharp (Jul 19, 2021 at 13:53)
Next up: Bike made of cloth! Then different types of cheese. How about whip cream, lobster shells, toothpicks, or dried spaghetti strands?

Thisisscott (Jul 16, 2021 at 12:15)
Hah, so plywood is currently outperforming the Pole machined aluminum?

ThiloSchmidt-Werthern (Jul 16, 2021 at 13:04)
The only bike pinkbike users can afford after paying for the outside subscription

CSharp (Jul 19, 2021 at 13:48)
Still disappointed that the fork, rear shock, dropper post, handlebars,wheels and tires are not made of wood.

sapinva (Jul 20, 2021 at 7:13)
Could have at least rounded over the edges. Imagine extracting the splinters after crashing that thing.

PS
I am not your father

DoubleCrownAddict (Jul 17, 2021 at 9:31)
The comments it inspired are actually more impressive than the bike.