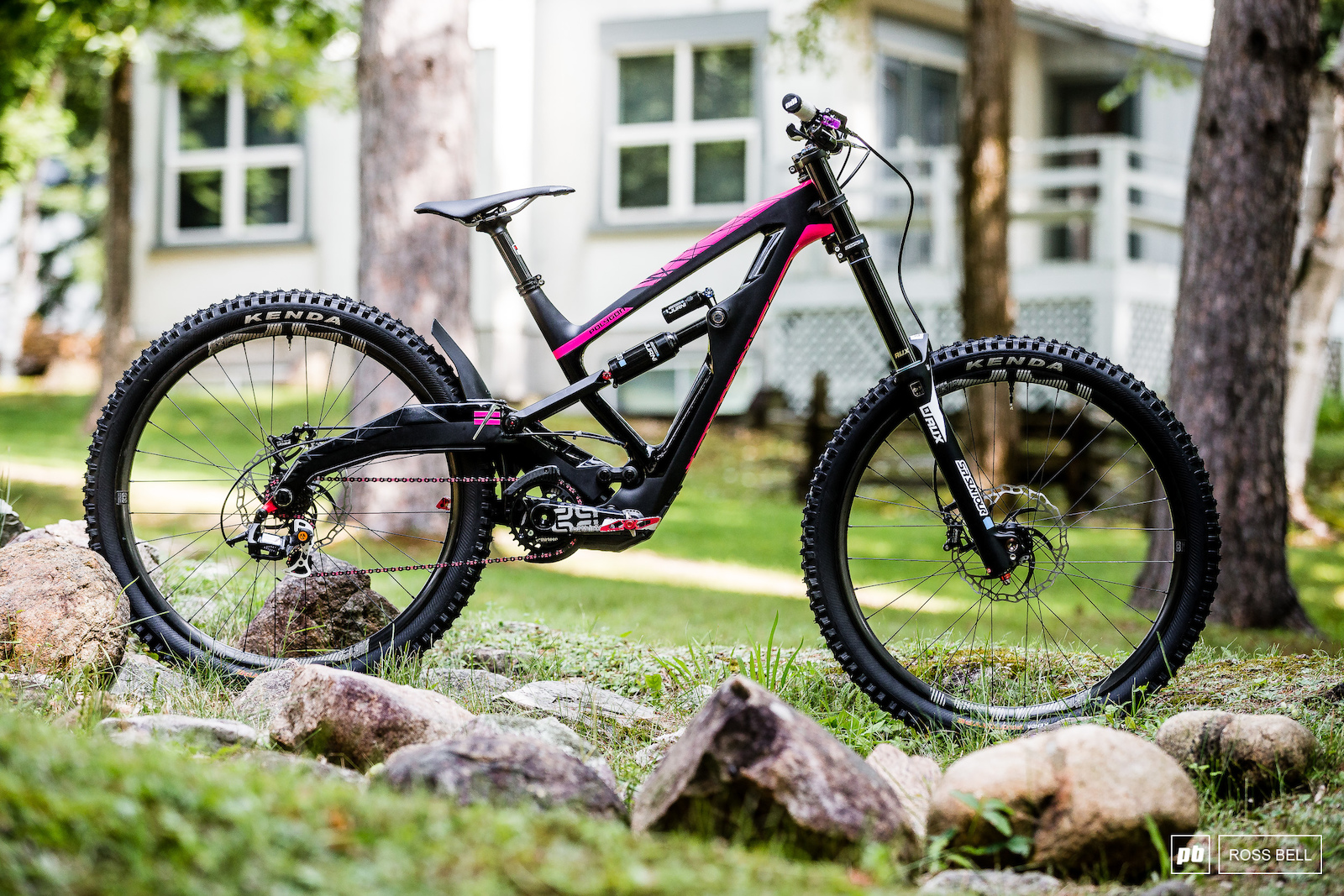 Tracey Hannah is currently sitting comfortably in third place overall in the World Cup standings, but there's no doubt she'll be aiming to put down another solid run on Saturday to finish out the season in La Bresse. Tracey's aboard the new Polygon XquareOne DH, but although the bike was only recently released to the public, she's been riding a prototype version for over a year. When the team first received the bike they did back-to-back runs with it versus the DH9, their race bike at the time, and the XquareOne was faster, which made making the switch to the wild looking machine an easy decision. 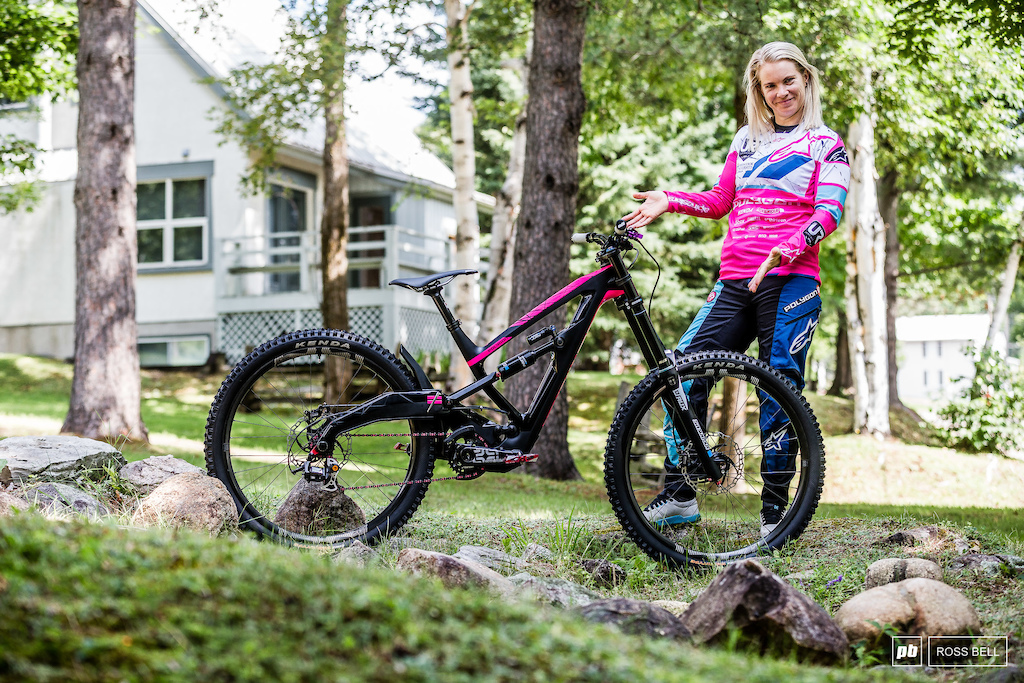 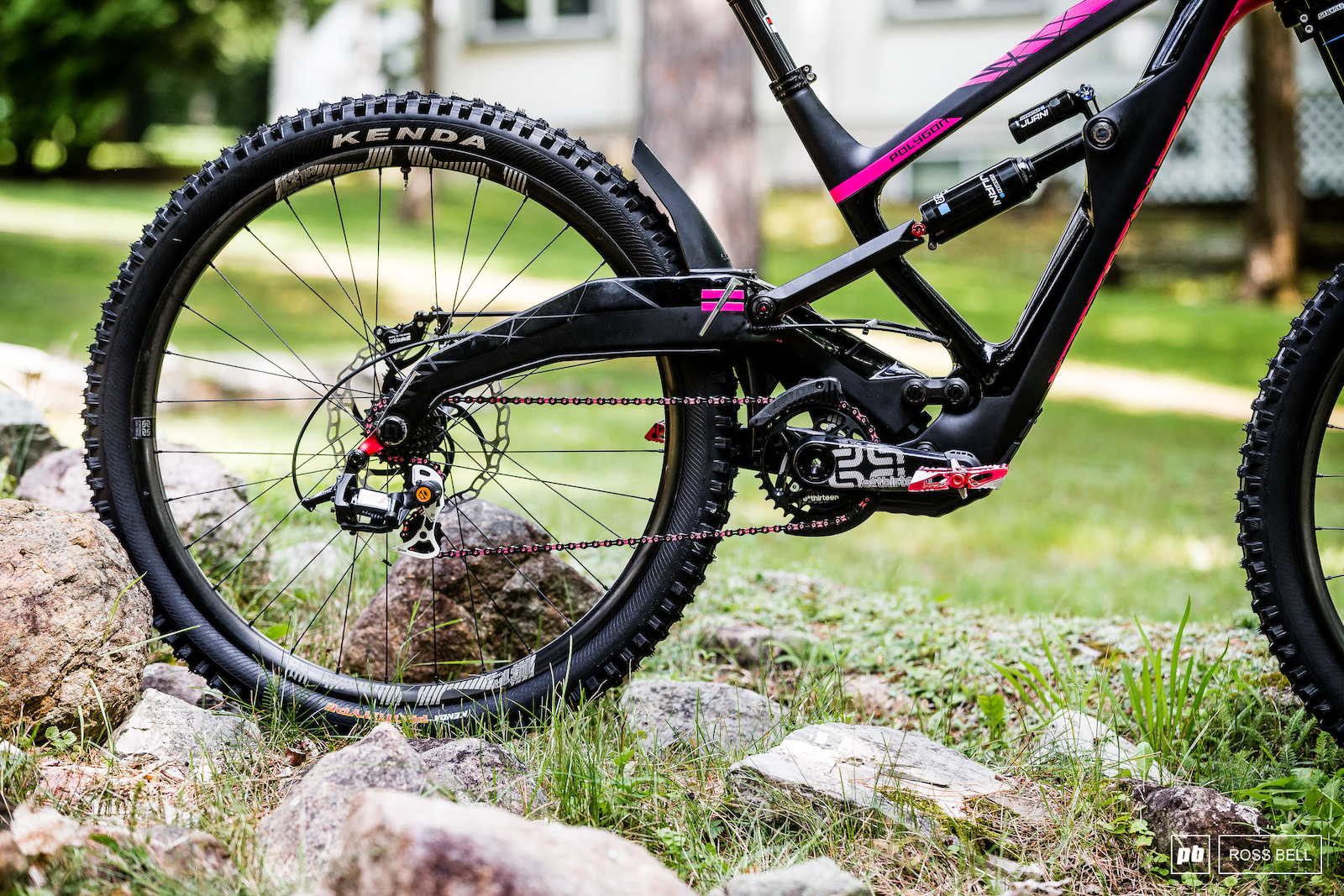 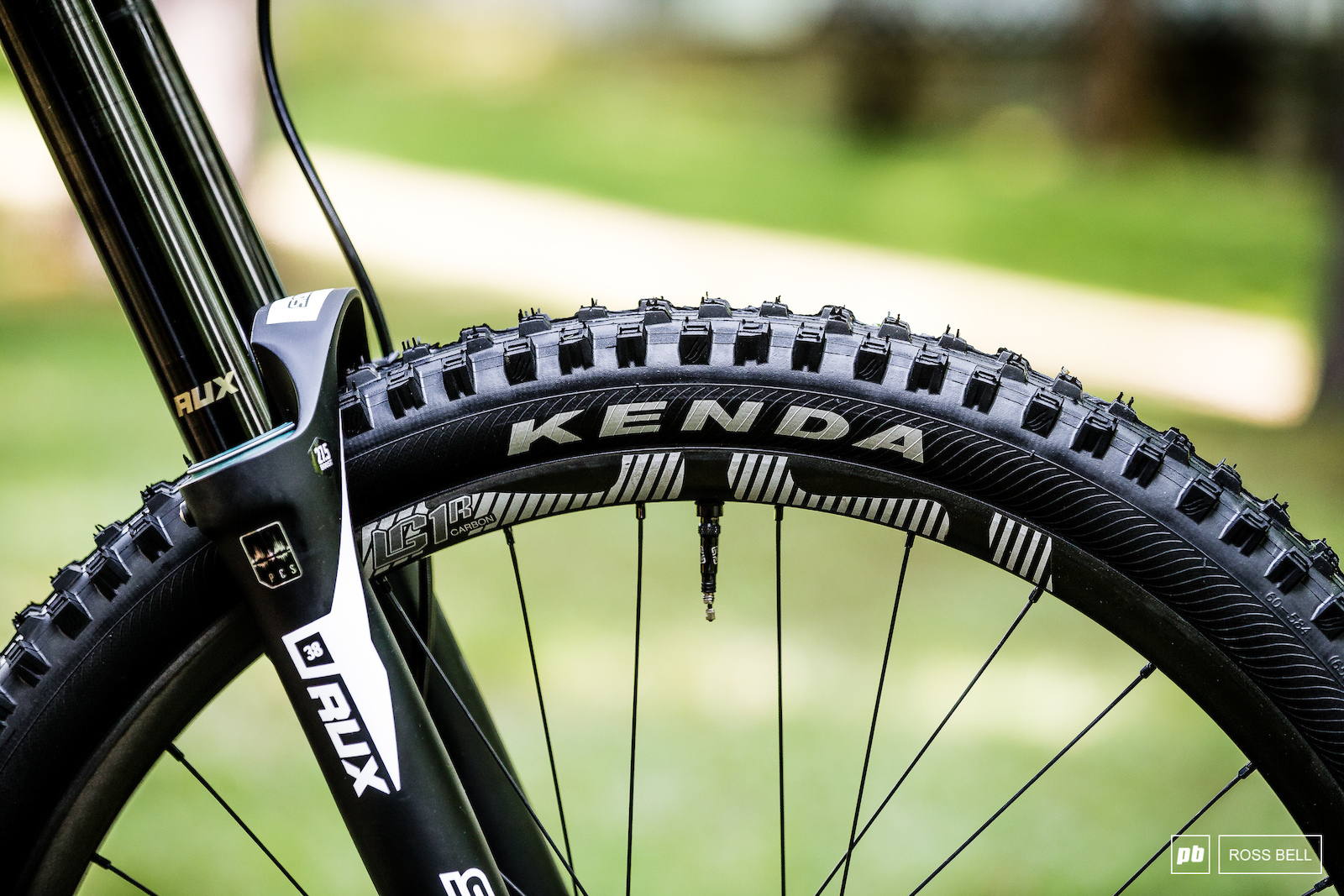 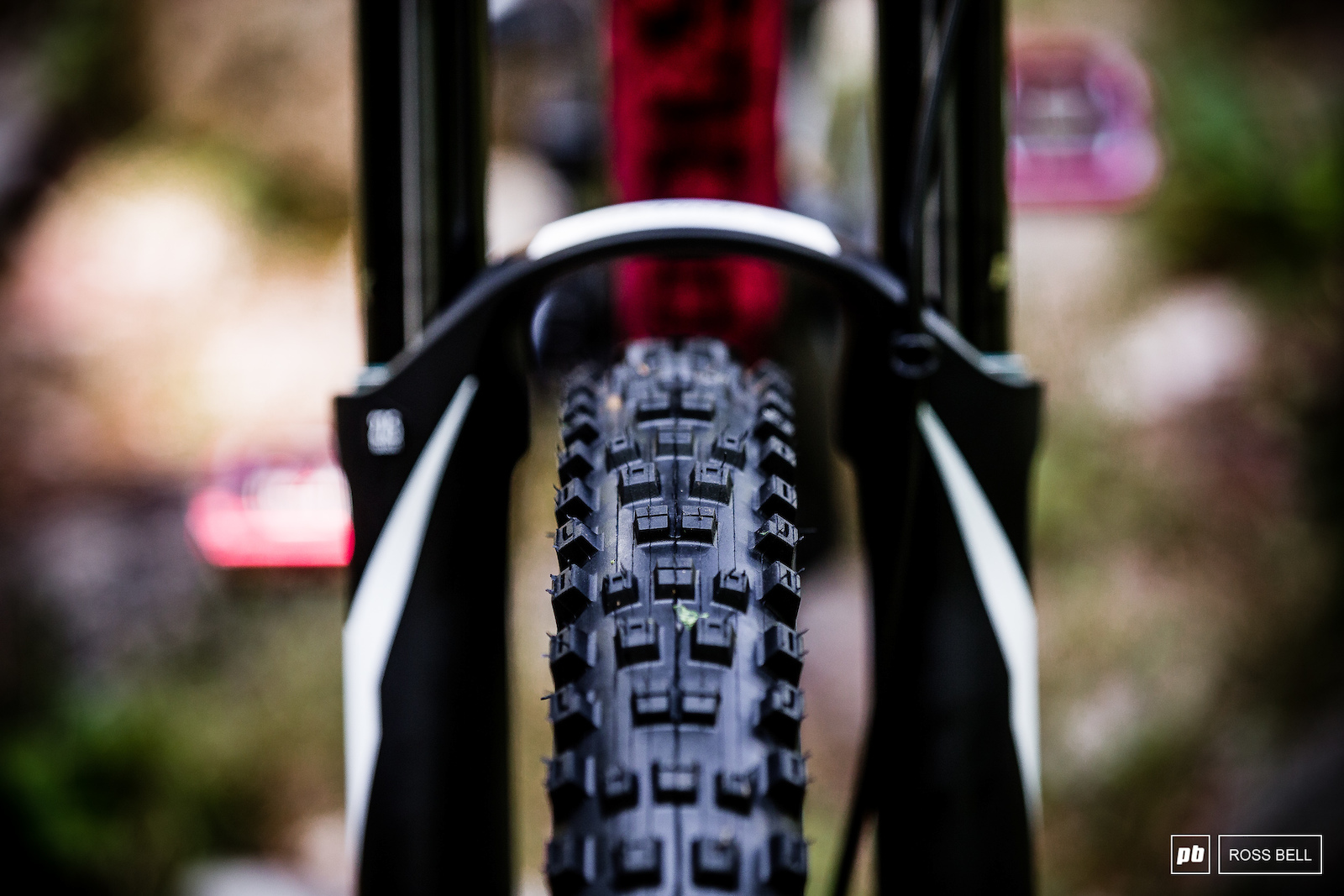 Tracey's trying out prototype versions of Kenda's Hellcat tires that use a thicker casing. There's also an insert in the rear tire for additional flat protection. 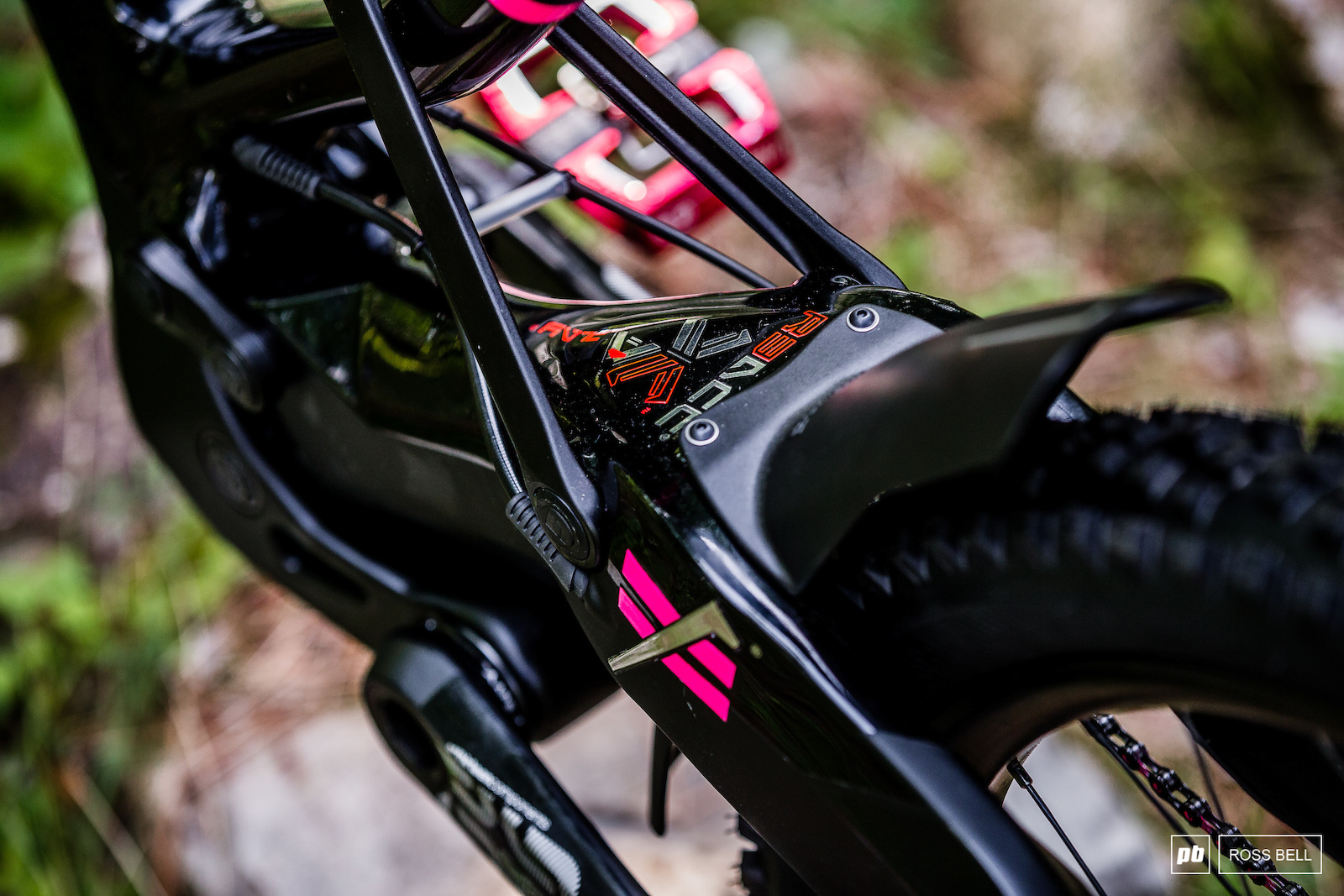 A closer look at the XquareOne DH's oversized carbon swingarm. 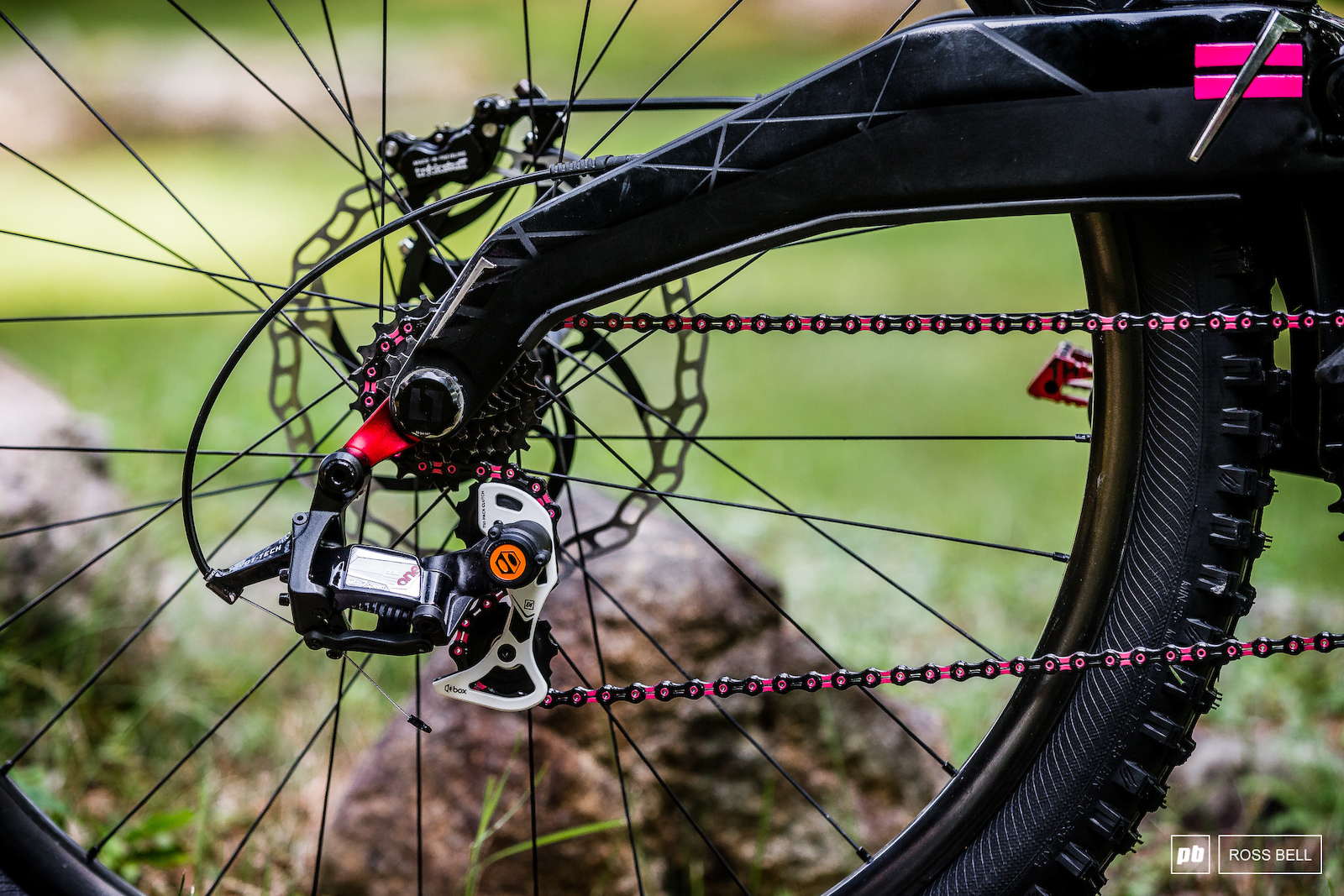 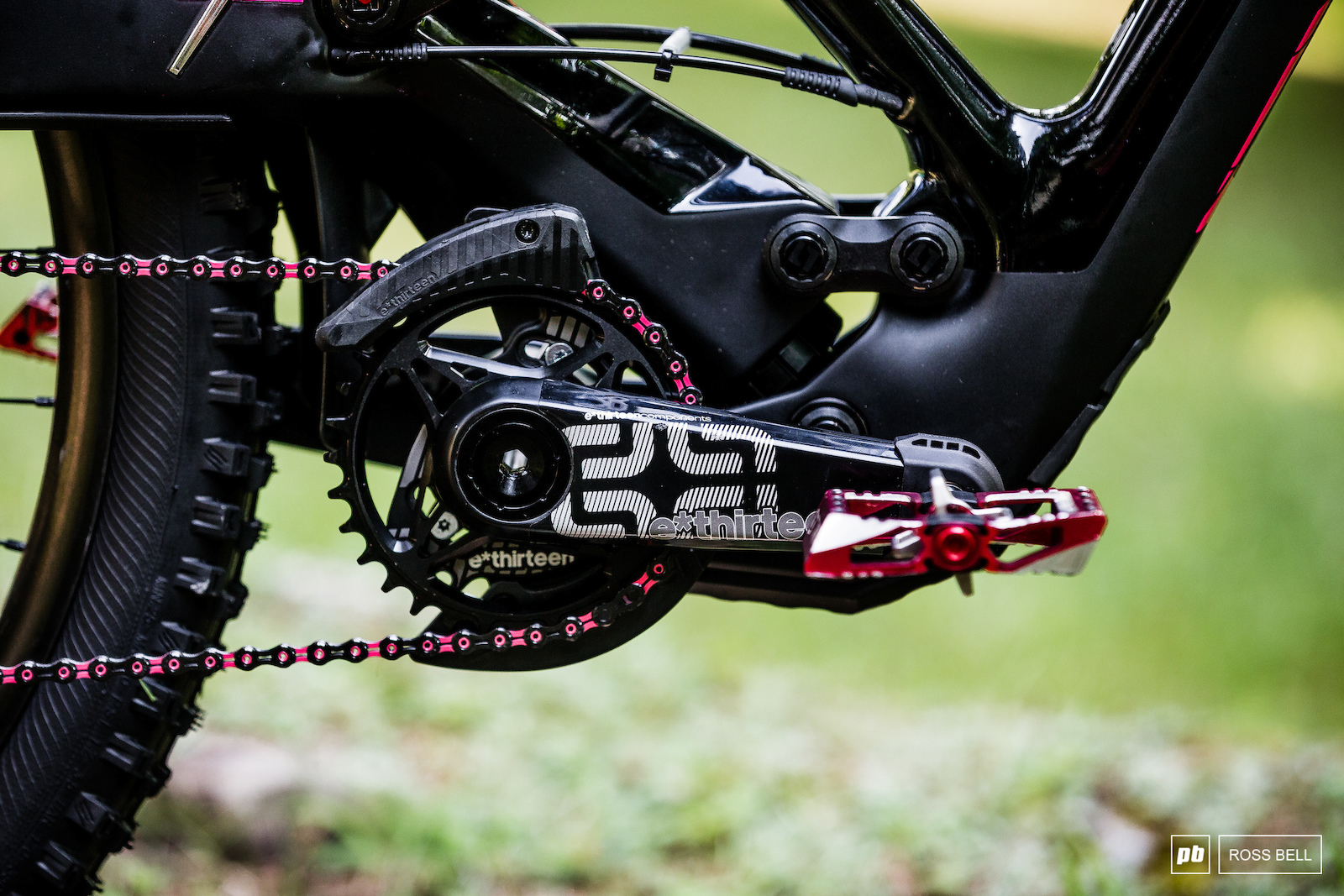 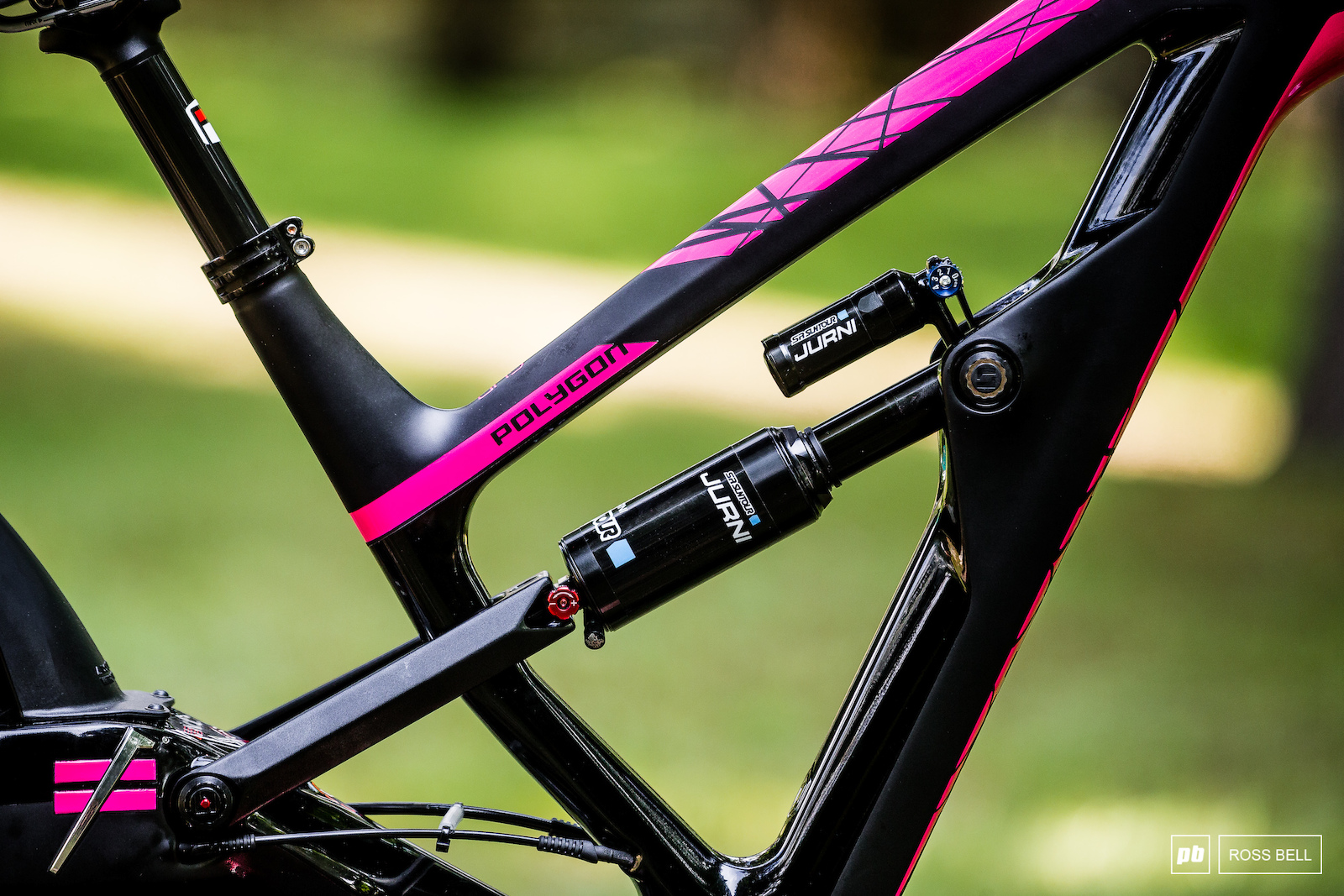 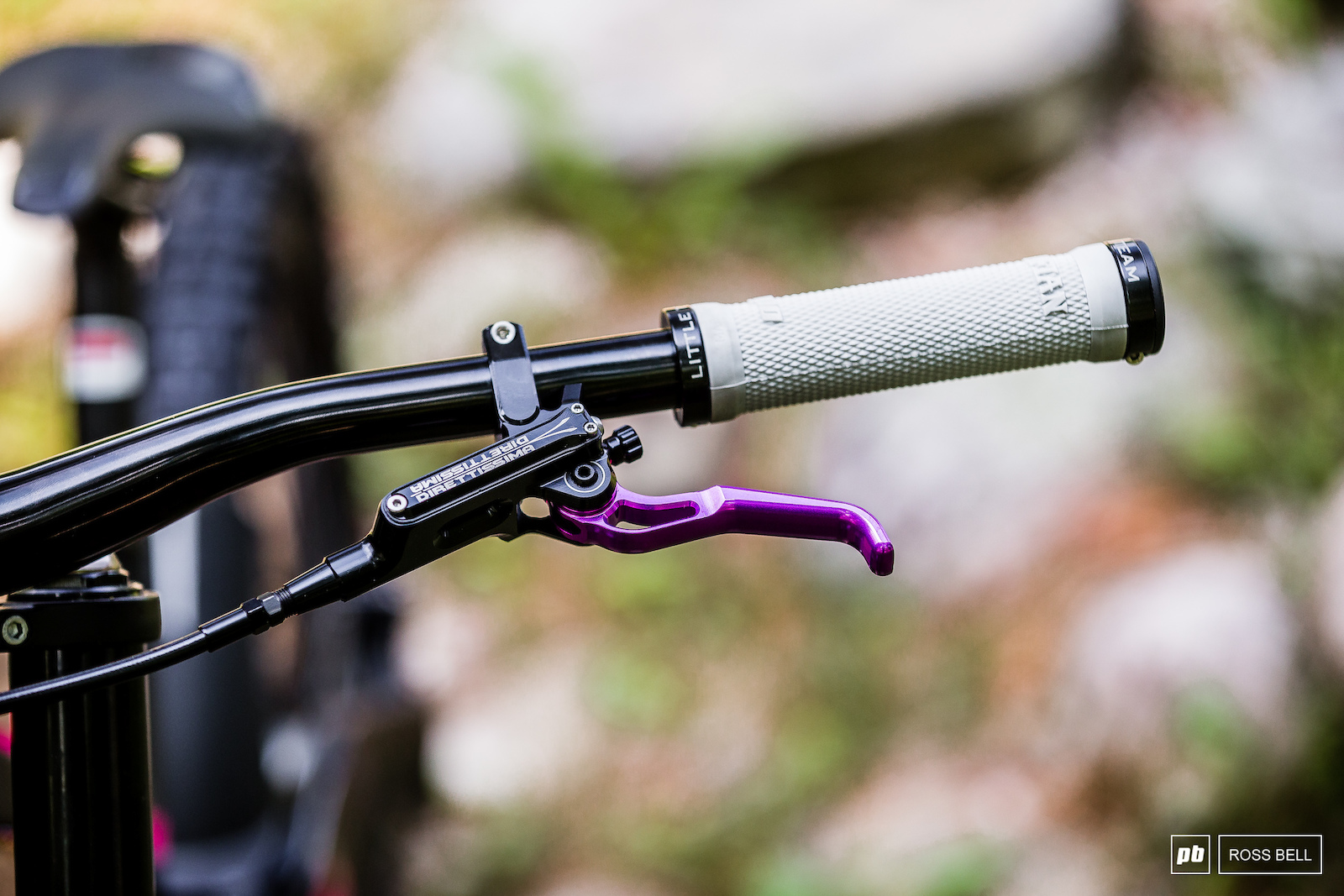 The track in La Bresse isn't that steep, but even if it was nearly vertical Tracey would have plenty of power with Trickstuff's Direttissima brakes. 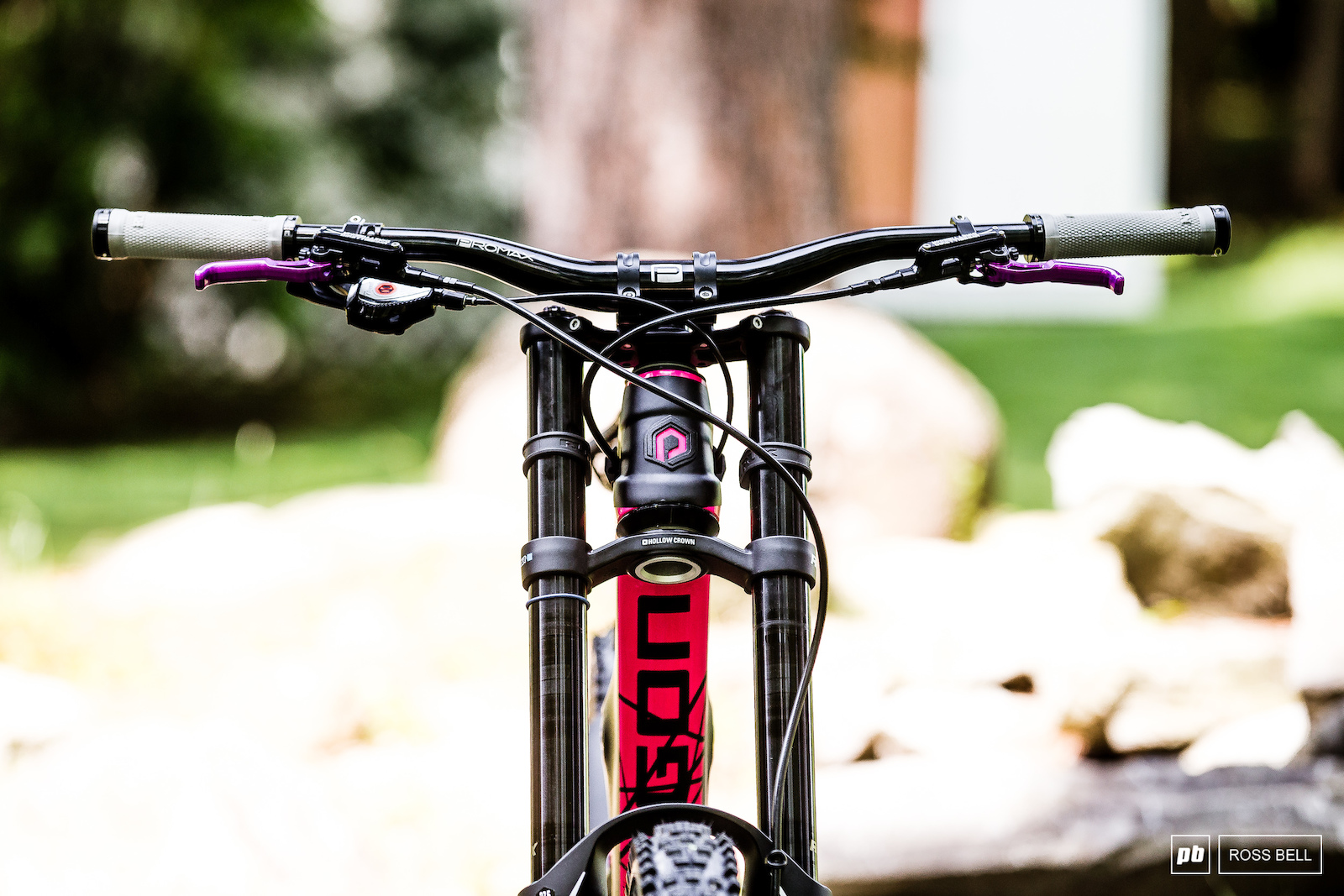 blackthorne (Aug 24, 2018 at 19:49)
Will someone please tell it’s designer to stick to engineering, not marketing. Xquareone and naild react2play or whatever constitutes some of the most cheeseball names this side of 1989

ka-brap (Aug 25, 2018 at 7:01)
@blackthorne: While true, the reason you see brands purposefully misspell names is to get around existing registered trademarks. I agree they still could have put a bit more thought into it, but this maneuver will become a more common thing.

danncam (Aug 24, 2018 at 17:18)
Strangely it looks so much more balanced than the trail bike version, or I'm just getting used to its weirdness.

samjobson (Aug 24, 2018 at 20:22)
Looks way more balanced, very burly and a bit moto for some reason. And much to my suprise/disgust, I actually find myself liking the silhouette as a whole...

DrSam (Aug 24, 2018 at 21:09)
The trail version has the weird top tube kinks. This dh version has a simpler straight top tube design. Just that minor change to the design, improves the look alot. I mean it is still polarising but it is winning back some of those that didn't like the look of the trail bike.

timmarris (Aug 24, 2018 at 17:15)
having ridden the 180mm "trail" version. i can say that these bikes absolutely rip. wouldnt be surprised to see more going this style of suspension at some point. bike felt glued to the ground .

bigmike9699 (Aug 24, 2018 at 17:45)
It sure does rip. I've got a Marin Wolf Ridge (160mm 29er version), and it's amazing. Best all around bike I've ever ridden (and those who know me, know I've ridden a lot of bikes). I've ridden bikes that descend better, and I've ridden bikes that climb better (although with much less travel), but no bike does BOTH of those things together as well as the Wolf Ridge (and this suspension design in general) does.

ninjatarian (Aug 24, 2018 at 18:58)
I feel like they are very close to having something that is a game changer, they just need to get it a little more sorted out, mostly that seat tube design / setup.

bigmike9699 (Aug 25, 2018 at 9:49)
@ninjatarian: in person, the bikes are quite something. The carbon moulding is impressive, and reminds me of the yester-years of early carbon design where companies were trying to be quite progressive with carbon moulding.

ciechan (Aug 25, 2018 at 3:11)
it's funny that they have put SR shock for pictures when she always races on FOX with no stickers

zyoungson (Aug 24, 2018 at 17:14)
I think a lot of bikes are going to look similar to this, the nalid (whatever it is called) suspension design looks promising .

brownstone (Aug 25, 2018 at 9:33)
I think it looks promising, but look a Commencal bikes, hard to argue with the results they get and really affordable too.

Kramz (Aug 25, 2018 at 3:13)
This bike reminds me of the difference between boys, and girls from when I was in like elementary school, or kindergarten, grade 1, 2. Girls don't really care, it's just a facade, like when a girl acts like she's interested in cars.

ArturoBandini (Aug 24, 2018 at 23:46)
Magic magic popagic OR underdamped marketing shit plus a spit in the face by the design engineer (not telling us any real facts because PB members wouldn‘t understand). That‘s for the reader to decide...