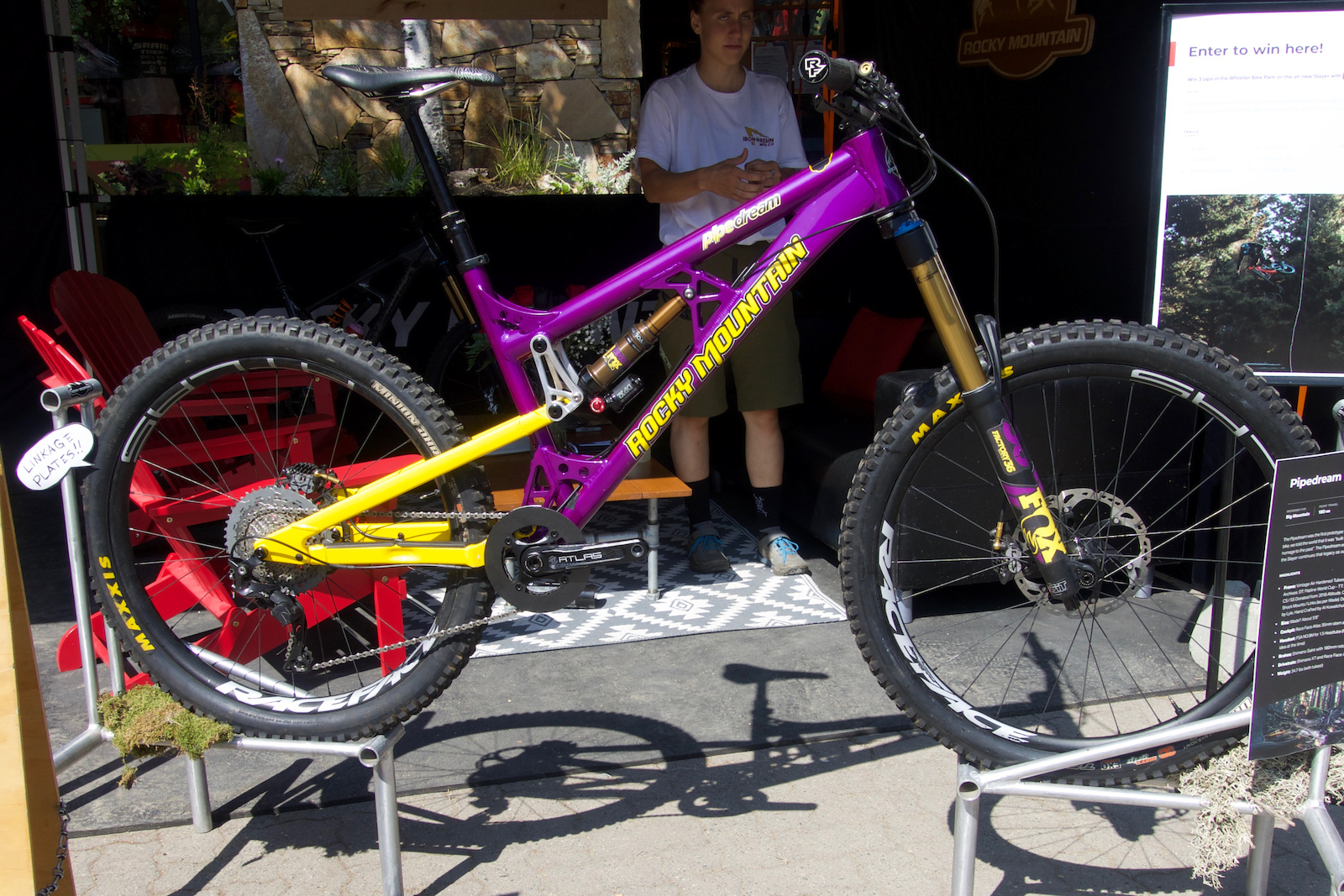 BIKE CHECK
Wade Simmons'
Rocky Mountain Pipedream
The aluminum Pipedream that Wade Simmons shredded on the Shore two years ago will have a familiar profile for anyone who has been paying attention to the many new bikes released this week as it was actually the basis for the new Rocky Mountain Slayer.

The Pipedream looked like a cool marketing project for an edit in 2017. It's now been revealed as a working prototype for the Slayer, hidden in plain sight. It allowed the Vancouver company to test away without any fear of leaks. We got a closer look at the prototype at their stand today: 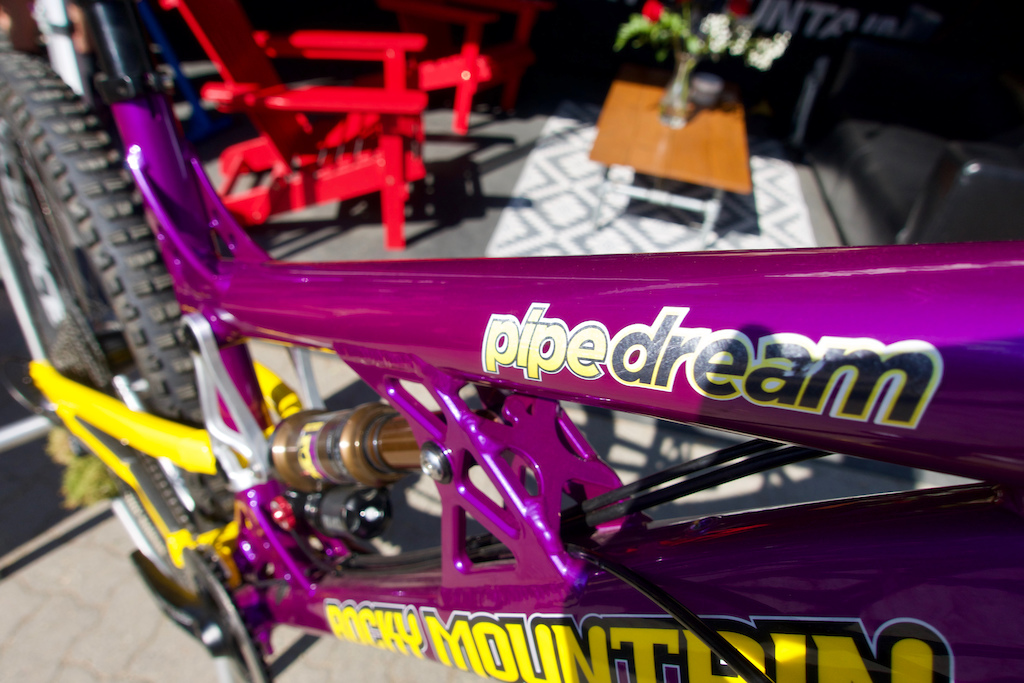 Built in house by Rocky, the bike includes the downtube from a Flatline World Cup, the top tube from a 2013 Altitude and the chainstays and seatstays from a 2018 Altitude. It was all assembled with yokes, gussets, shock mounts and links that were also specially built in house. Rocky builds all its prototypes in North Vancouver for testing on the Shore before shipping out production to Taiwan. 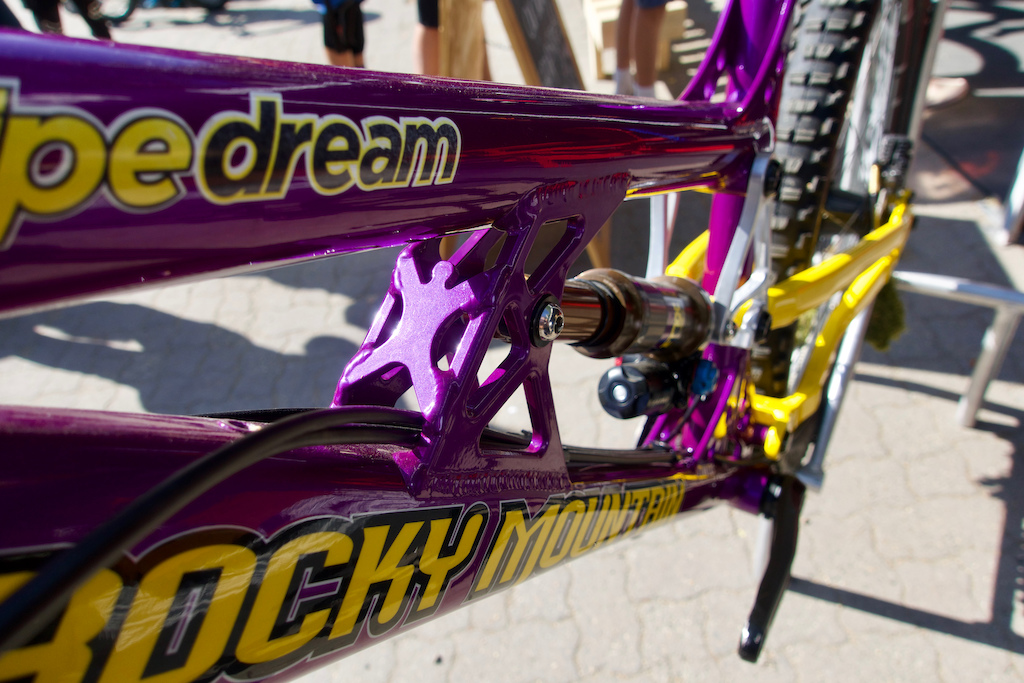 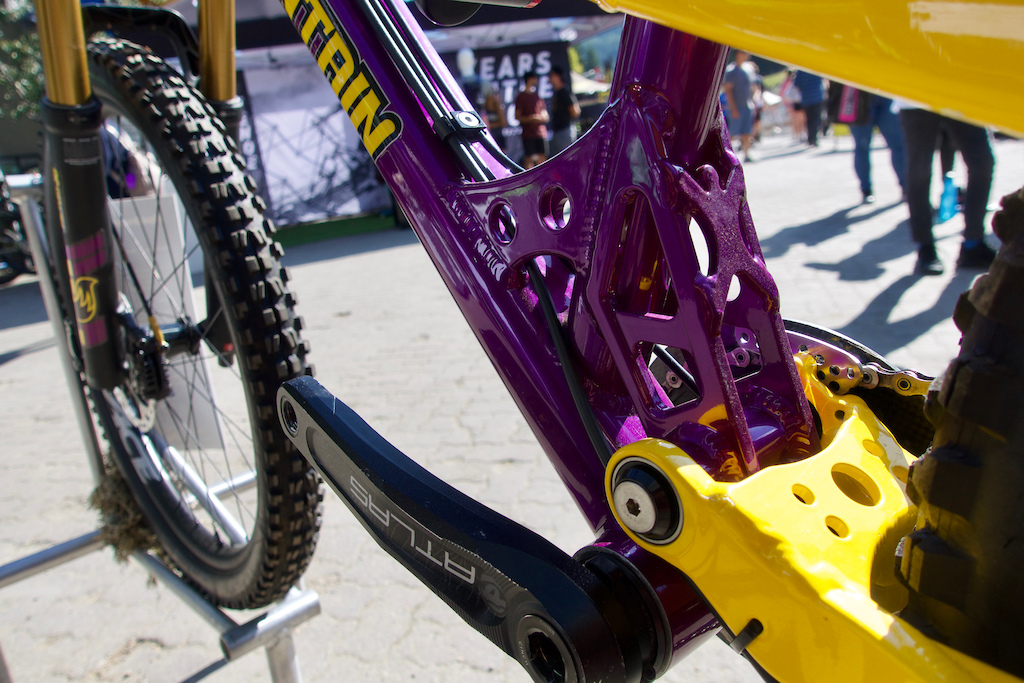 Many of the early Rocky Mountain freeride bikes had a feature that allowed you to mount the rear shock in 3 different locations. This was known as "NE 3", and required 2 linkage plates on either side of the shock with a cross-brace to stiffen everything torsionally. While having a bit of fun with cross-bracing designs, the NE 3 Man was born. 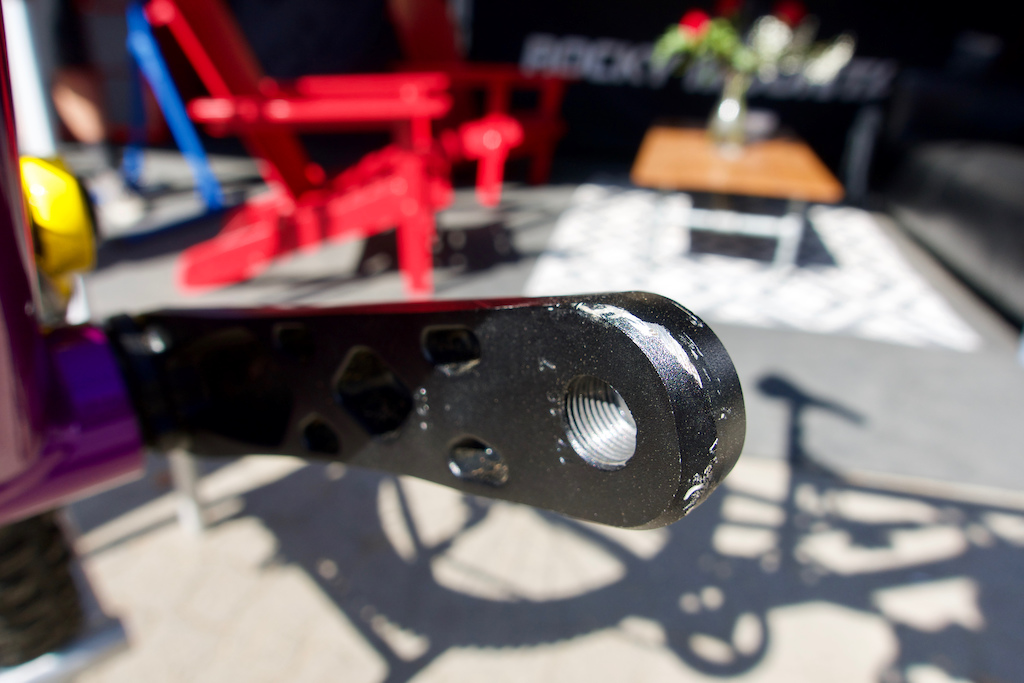 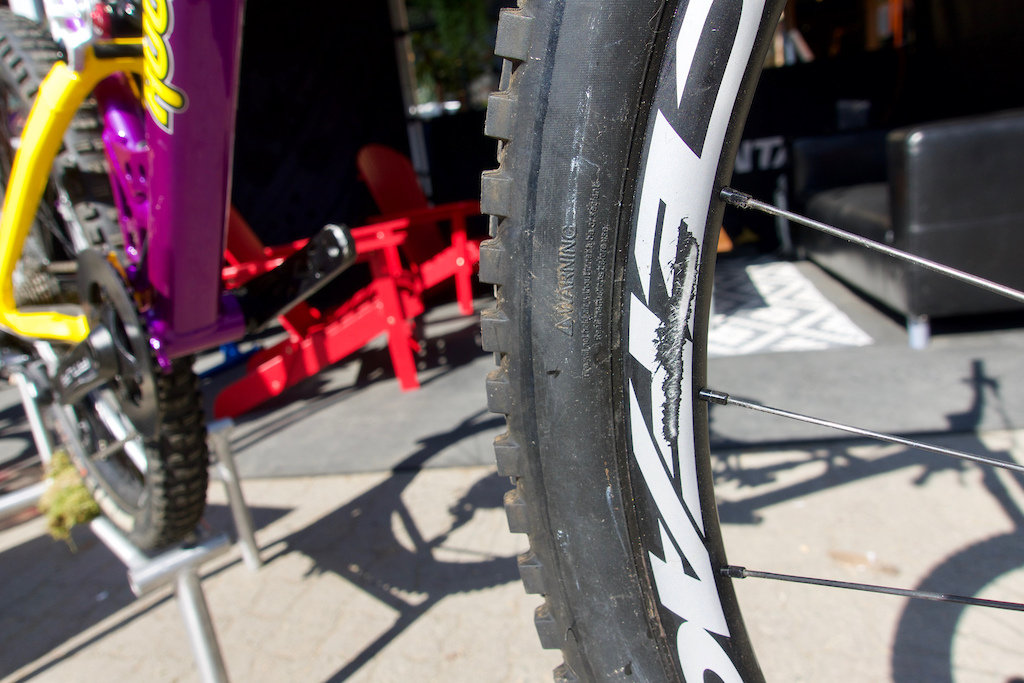 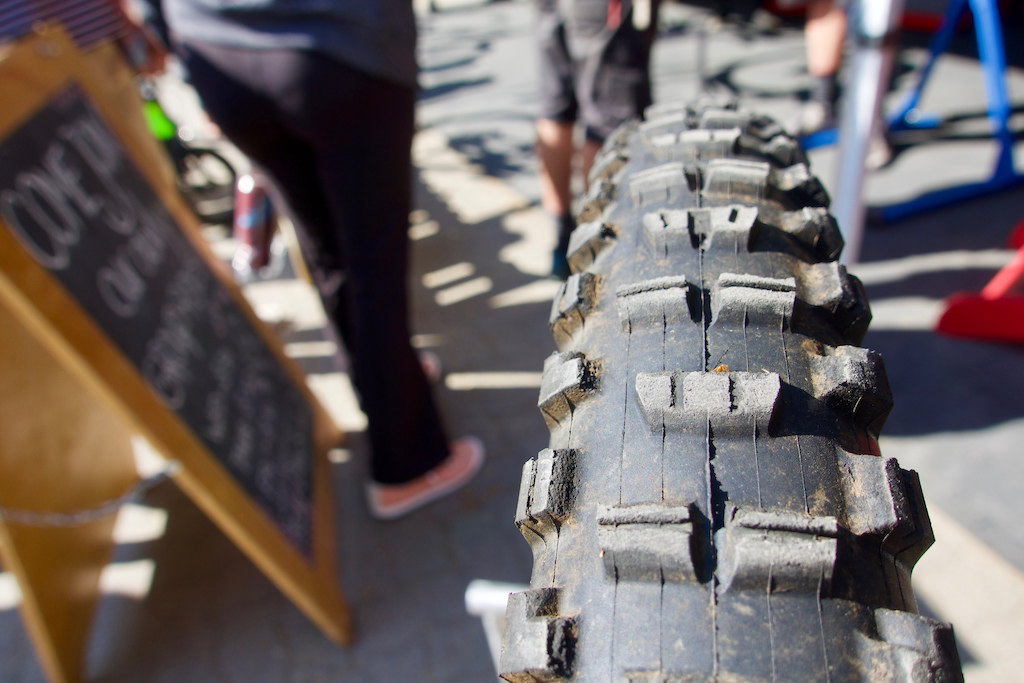 This bike is no show pony, there are signs of abuse everywhere. 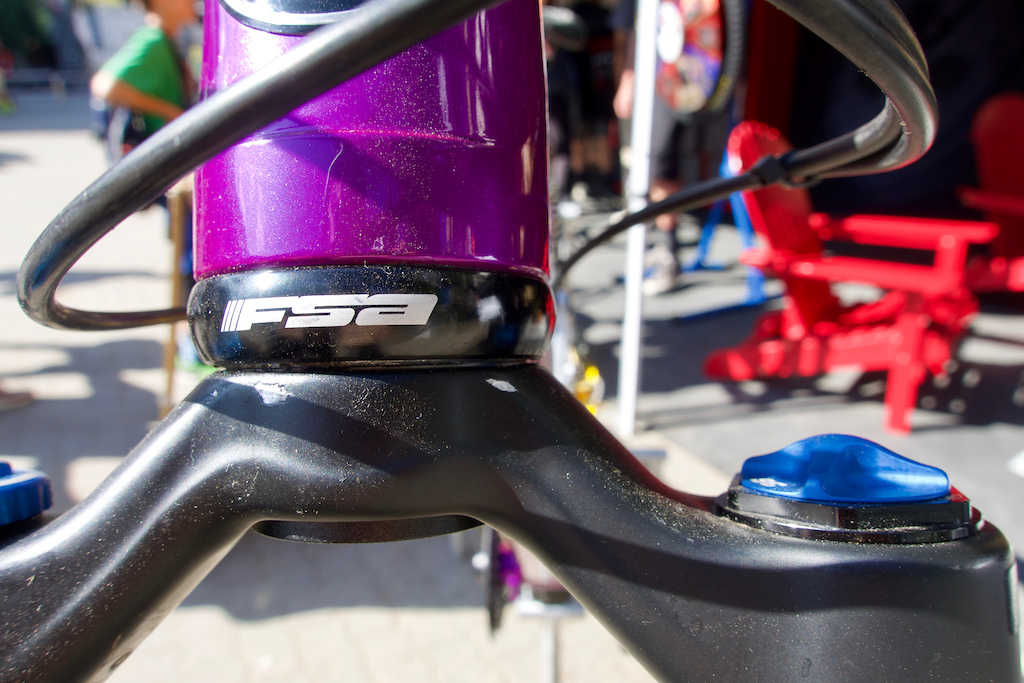 An FSA NO.9m headset for a 1.5" straight headtube. 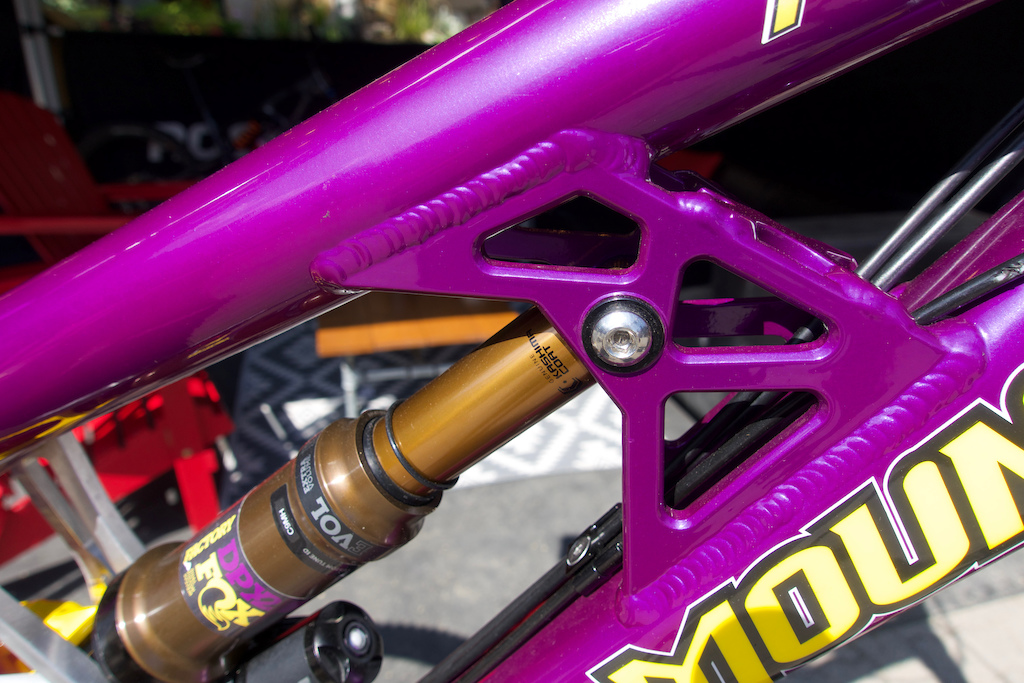 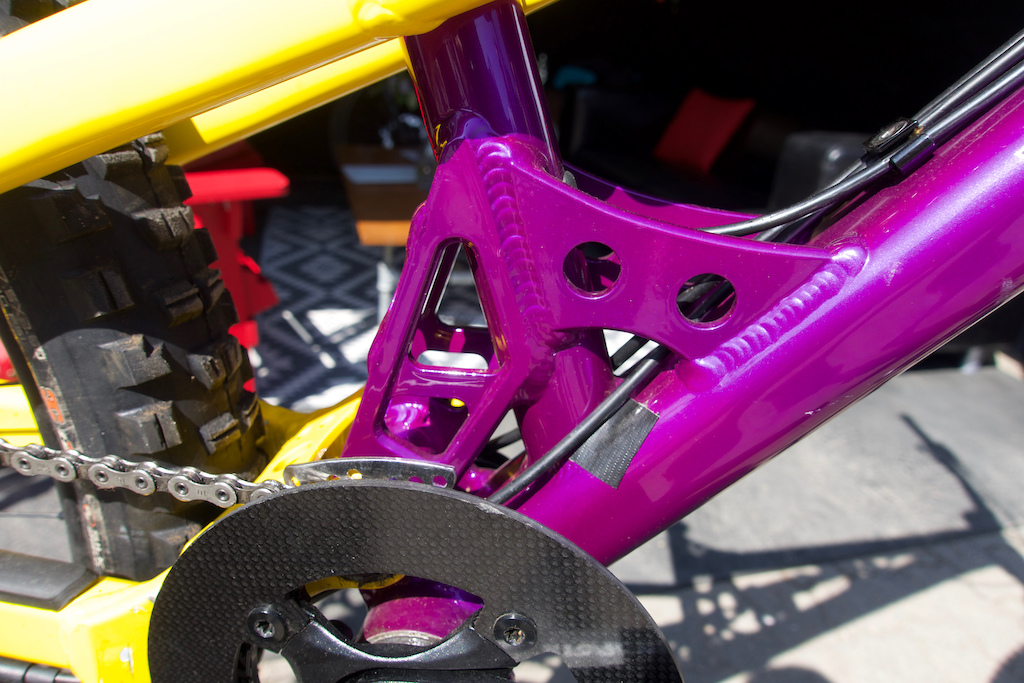 How many gussets is too many gussets? Trick question, as you can never have too many. Longtime Rocky Mountain welder, Al Kowalchuk, was on the torch for all of these. 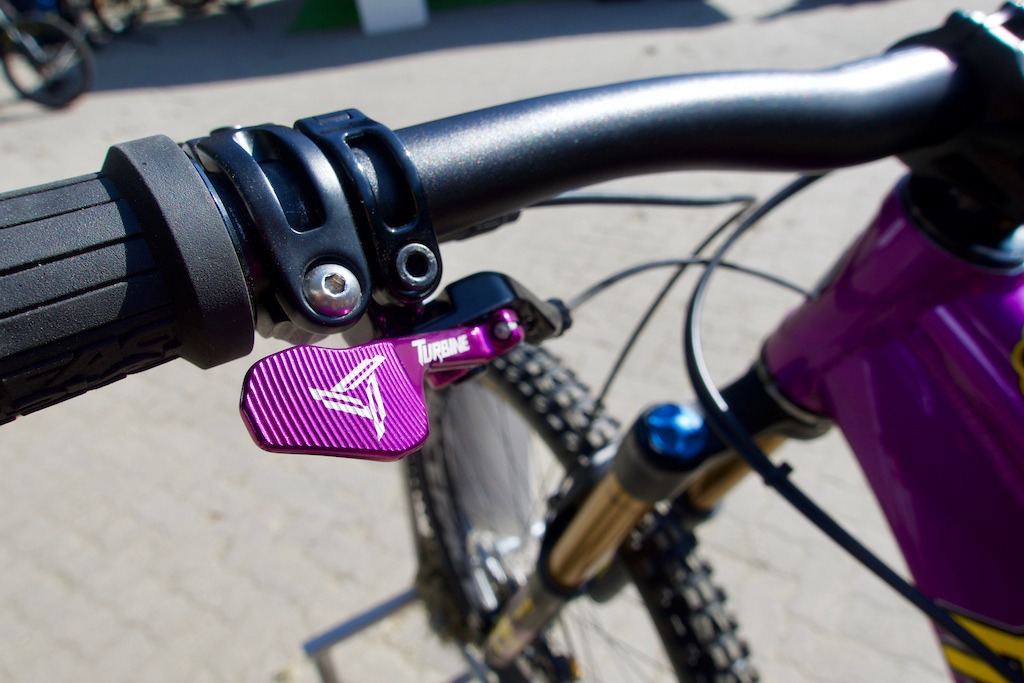 A purple lever for the RaceFace Aeffect dropper is a nice touch. 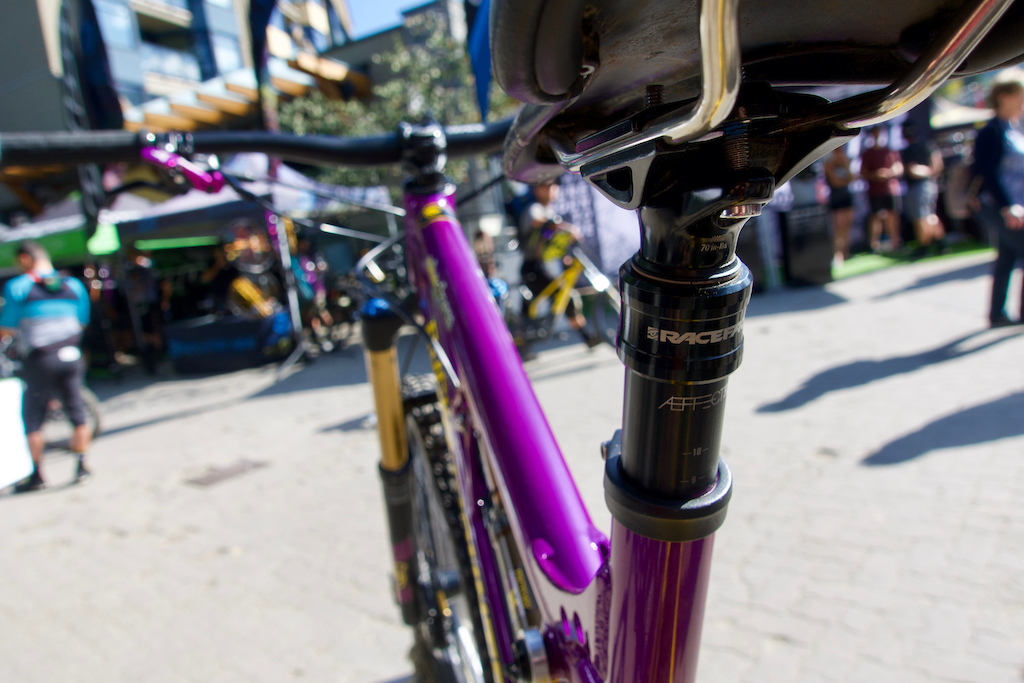 These were a very rare sight at the turn of the Millenium. 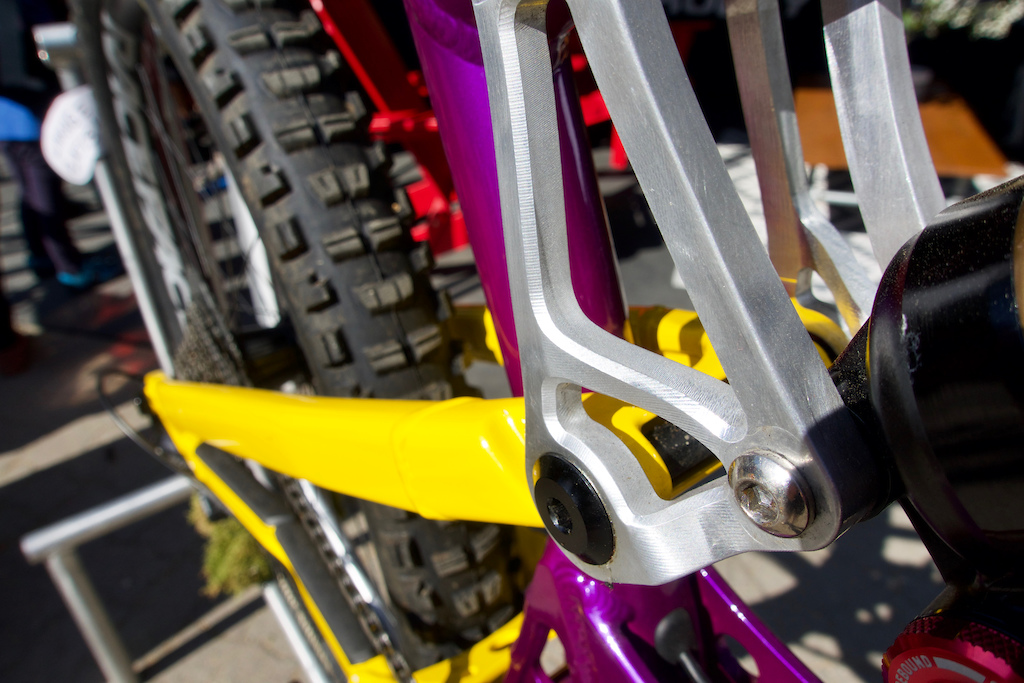 The CNC'd, 3D link was a feature on a lot of early 2000s Rocky Mountains including the Element, Edge, and Slayer so it was a natural addition to the Pipedream. 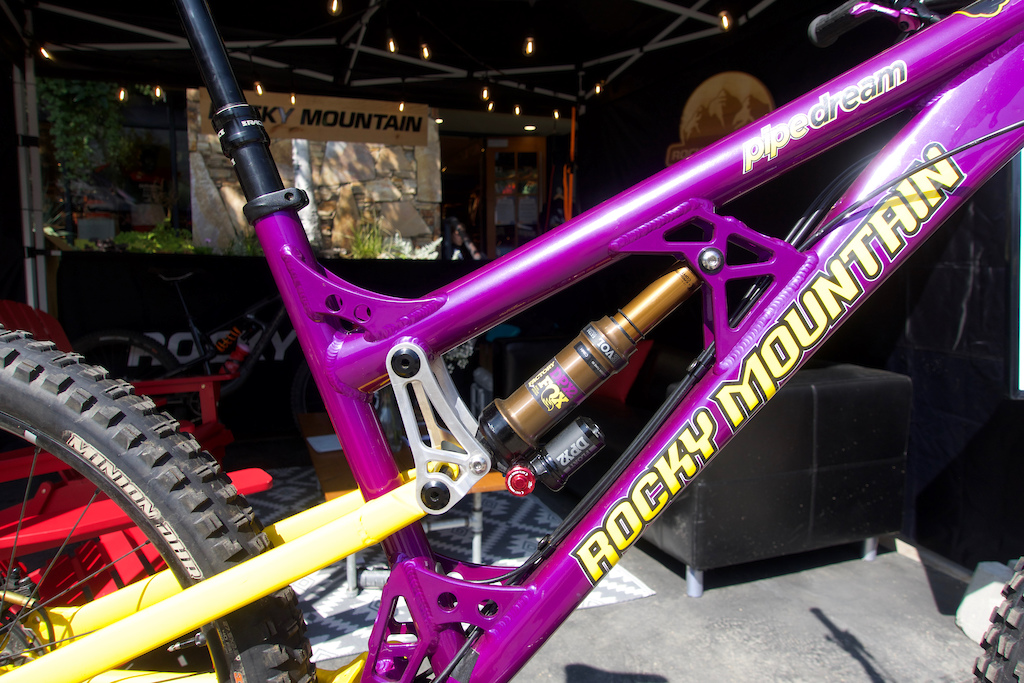 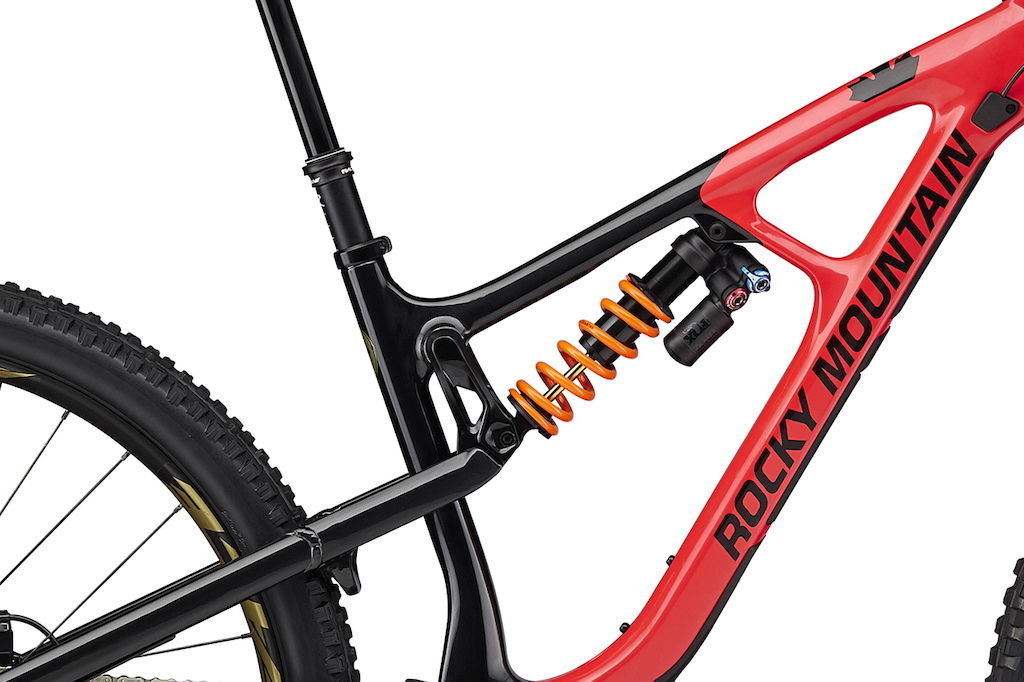 The Pipedream's linkage vs the Slayer it became 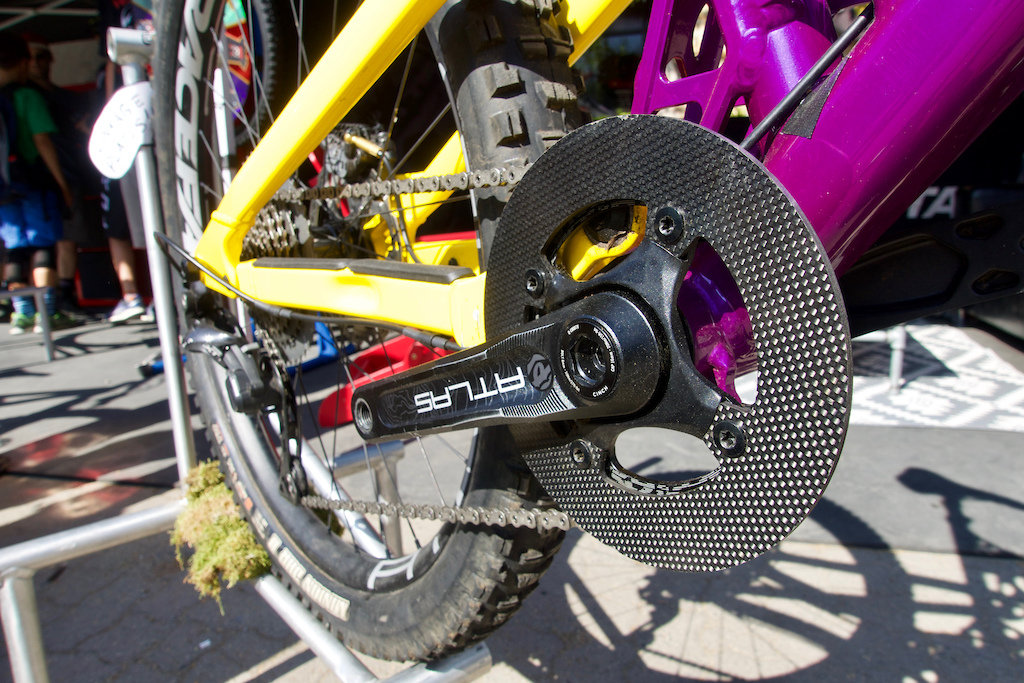 A big ol' bash guard to keep the chainring safe. 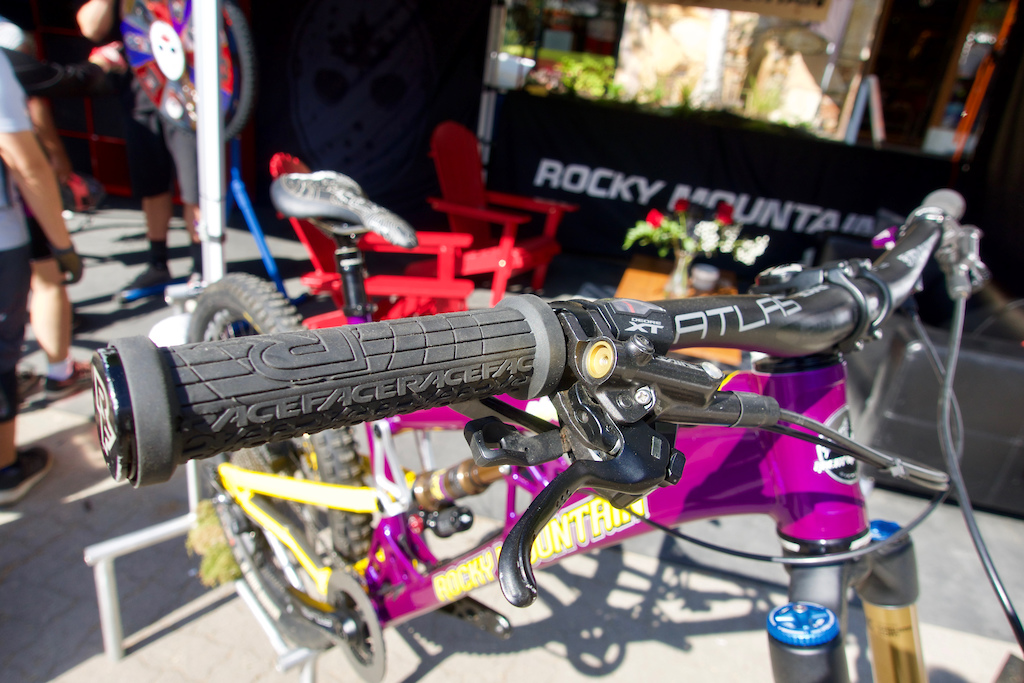 leggatt (Aug 15, 2019 at 12:57)
They should have just released this frame as is in this colour scheme and sold a shit ton of them. I would be on one now if it was available. Great looking bike, great name too.

gonecoastal (Aug 15, 2019 at 21:21)
It’s unridable without ability to place a water bottle inside the triangle. Further proof Wade is from Area 51.

Zany2410 (Aug 16, 2019 at 9:26)
Just look at any good steelframe company. There you go! I ride an Production Privee Shan No5 and love it! Modern geo with oldschool and simple look. Other Company´s like BTR (Pinnr) or Starling Cycles (Murmur, Swoop) do fantastic bikes that ride incredibley well and take a crazy beating (Cause its steel

Svinyard (Aug 15, 2019 at 14:05)
I dont get why Rocky didn't just make a production run of these in a few sizes and allow the link adjustment to fit 26" wheels appropriately or buy a separate link aftermarket. It would have been so different and unique but functional too with some modern geo tweaks. The street cred of this bike is through the roof and it hits at the heart of Rocky Mountain too. A proper modern throwback for the masses throwing it sideways (not me lol).

Then they make a kids version: )

I rode 4 Pipelines over a few years way back when freeriding was born - That steed opened my eyes and my riding to new ways of playing with the mountains all over this planet.

It embodied the soul of Rocky Mountain Bicycles and it's awesome to see you're back at it .

Thanks for the inspiration and all of the wicked ride memories you trigerred for riders like me.

lehott (Aug 16, 2019 at 14:17)
@chainspotting Cannondale, Brodie, Cervélo, Argon and Chromag are canadian based or Canadian parent owned corporations! We've got some sick bikes

novajustin (Aug 15, 2019 at 14:16)
does he seriously run the shifter window or is that just another throwback touch?

wapope74 (Aug 15, 2019 at 17:04)
Always been a fan of Rocky Mountain bikes. Love the stealth mode they went through in order to proto for the Slayer. Brilliant. Better than zebra tape and checkers cruising down the trail

Nicksen (Aug 15, 2019 at 17:48)
The one word 'linkage plates' on the Pipedream look a lot better than the rather weird looking welds on the link on the alloy Slayer version in my opinion (www.pinkbike.com/photo/17596913)

mlangestrom (Aug 16, 2019 at 3:25)
It looks really weird on the black one, the red color scheme hides it a bit. Should have done linkage plates or a straight tube.

dylandoe (Aug 15, 2019 at 17:59)
Even though it's now up for sale, I still have my 1999 Pipeline. It has always done very well in all conditions. I wrote Rocky Mountain (as I'm sure 1000 others did) to ask them to please make these. I guess that I'll just have to sell everything, including my older Slayer to get "THIS" in the new Slayer.

sngltrkmnd (Aug 15, 2019 at 19:02)
Somewhere I have a pic of the Reaper FS that Rocky brought to Sea Otter years ago. (2001?) It was the basis for the first Slayer which itself was an update to the Element DH but with Easton’s RAD tubes. Funny how models converge.

Skinnyrob (Aug 15, 2019 at 20:15)
There is absolutely no question that I would buy this bike in a second if I could. I though then and I still think now, Rocky Mountain is completely missing the boat on this one. It would sell like hot cakes to us older 90s era riders.

Lookinforit (Aug 16, 2019 at 13:27)
@mlangestrom: You're my hero for making that, but my villain for tempting me so. I am too close to buying the slayer and having it painted and you're not helping

Kramz (Aug 16, 2019 at 0:44)
Carbon fiber bash guard, nice. Yeah, I always wonder about my ISCG05 tabs, looks like if I really bashed, they might break off, but is also a good solution. Carbon fiber ring might be the ultimate solution.

ronufoh (Aug 16, 2019 at 11:57)
It was so cool to see Rocky make this from scratch in 2017, just for shits and giggles as we presumed back then. Now we see there was an ulterior motive, so they lost some points in my book :semisrs:

34.7 lbs is not bad for a 180mm metal bike with tubes built Wade tough though

Pumastang (Aug 15, 2019 at 15:15)
I remember the good old times in the nineties where a middle classed Thin Air frame was handmade in canada. And the Colour... Electric Blue. Loved it.

RoverDover (Aug 16, 2019 at 4:28)
My 1999 purple and yellow Pipeline frame hangs on the wall of my Garage with my Switch and RM7 frames. I plan on getting a new Slayer and getting it custom painted.

jsnfschr (Aug 15, 2019 at 14:56)
Should have made some tweaks to the previous Slayer and introduced the Pipeline as a new model.

zyoungson (Aug 15, 2019 at 15:59)
Old school goodness right there, I remember when bikes used to have straight tubes

WAKIdesigns (Aug 15, 2019 at 12:53)
I want that fork but at the same time I just cringe at the very sight of how little contact area there is between the crown and the steerer