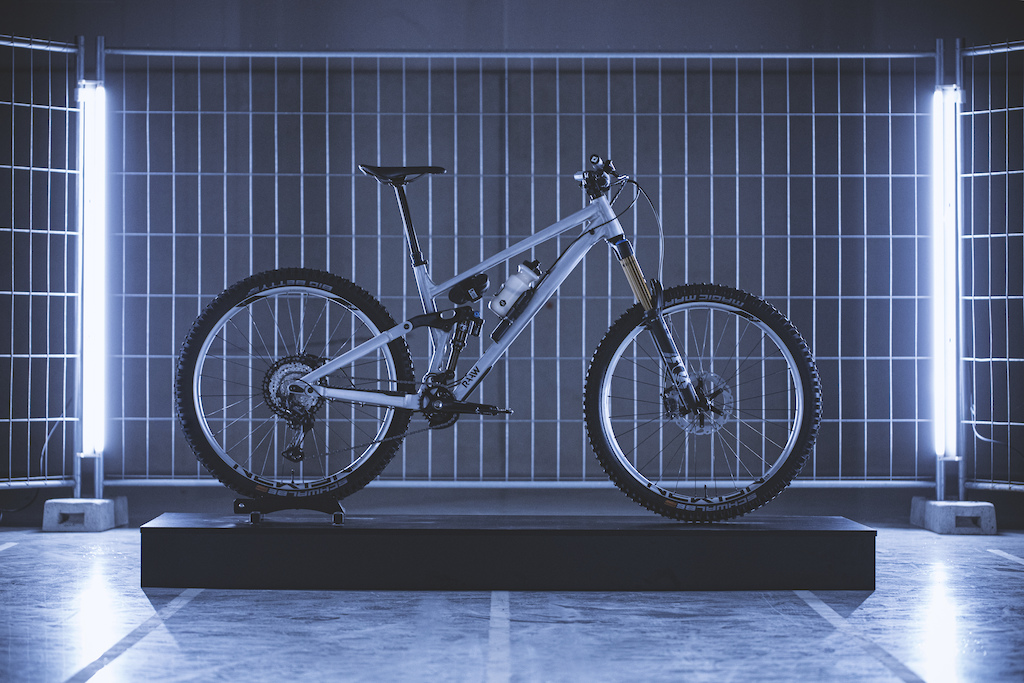 Bike Components is a bit more than just your regular online shop. Throughout Europe they're often the go to site for getting hold of, well, components as well as bikes and all manner of cycling related bits and pieces.

A recent From The Top with their CEO, Philipp Simon, examined into their origins, how the online retailer works and can react differently to other setups and talked about their own, BC, brand.

But in what could be a first for an online retailer, they've commenced a project looking to offer custom built bikes using select brands that they feel fits the style of the project and most of the time, brands they also use to build their own bikes.


Their first bike in this project, the Industry's Choice, is the RAAW Madonna V2. A bike that we are fans of at Pinkbike for its eye watering speed capabilities and attention to detail that made it an obvious choice for a chassis starting point with the guys at Bike Components.

This Industry's Choice project came about as a simple idea between mates. The guys at Bike Components and OneUp were chatting about bikes, as most industry folk do, and the simple idea of offering a custom build was the seed that grew. While the video portrayal of it may be a bit more scripted, the story essentially played out exactly like it.

For Bike Components it not only offered them a unique avenue for their own promotion but also promoted the smaller rider centric brands that they ride with day in day on their very own bikes. 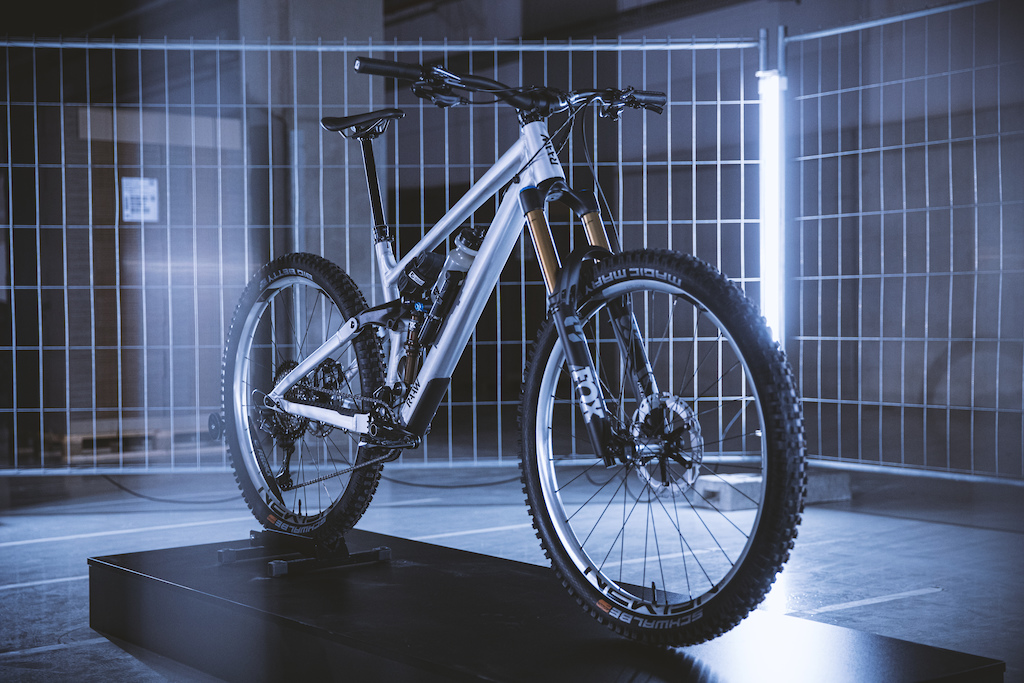 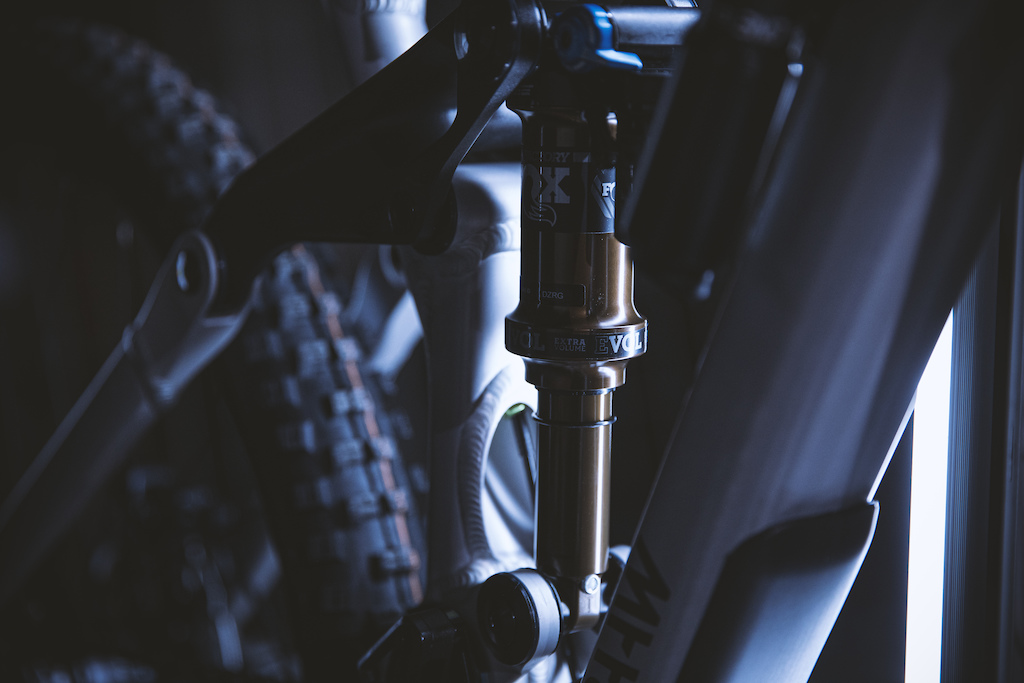 The Madonna V2 was the basis that all other parts would be hung off, and Ruben Torenbeek, the man behind the brand, was right behind the idea for more than just reasons of brand promotion. This isn't a huge money making venture for Bike Components and neither is money the focus for this project. It's as simple as creating a damn cool bike that gets you excited. The same excitement that we all know when we buy that new bike we've been lusting after, or tighten the final bolt on a bike we built from scratch, hand selecting all the components.

RAAW already partners with Fox for suspension and these bikes come with the DPX2. The little shock deceptively packing a lot of party in it and works well with the Madonna's kinematics. Up front the new 38 not only fits the proportions of the bike in terms of looks, but again, is right in line with the whole bike's intentions. The Madonna uses a 170mm travel fork as standard, but if you're after even more party up front then it can also work well with 180mm, that being something that is relatively easy to adjust by any home mechanics or service centres. 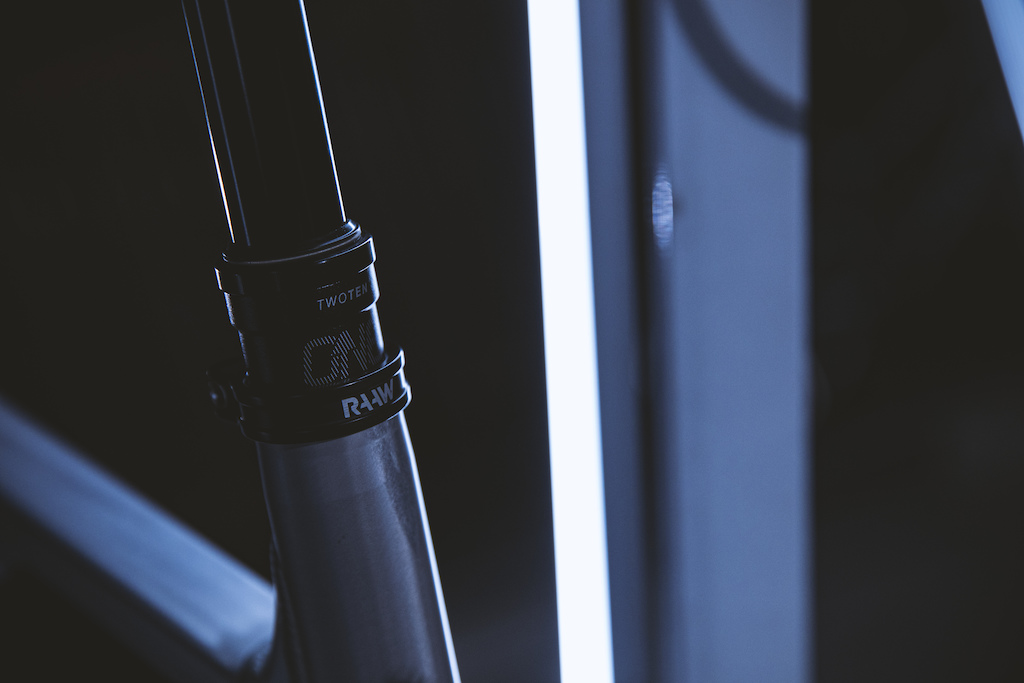 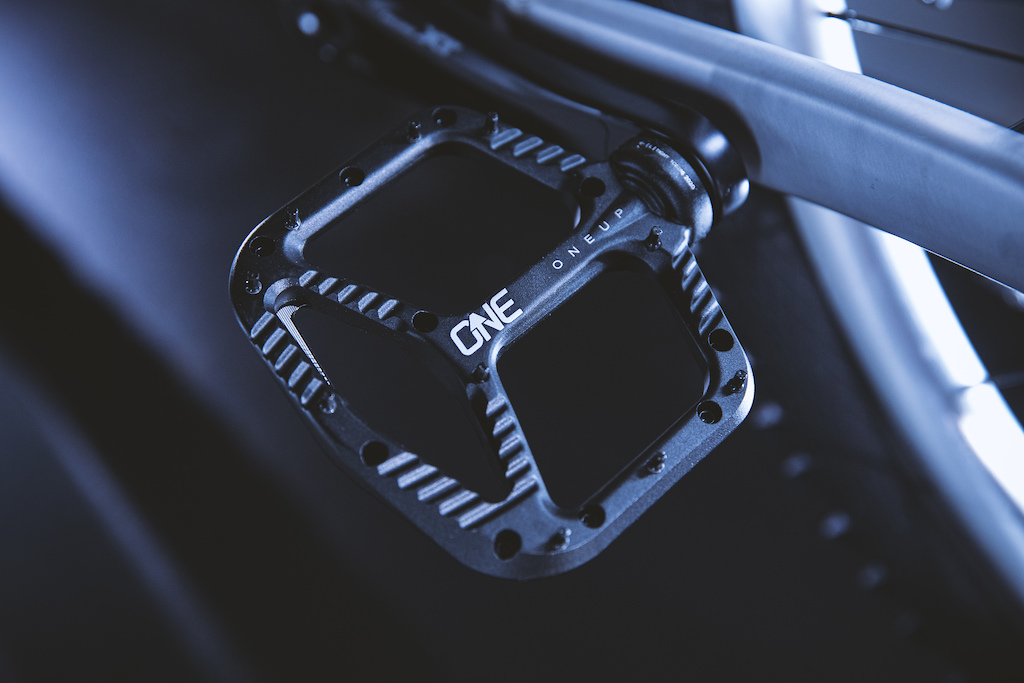 The guys at OneUp, with which the project also originated, were obviously also as keen as mustard. Their bar, stem, pedals chain guide and dropper post are used on the build, with the bars having some custom decals to tie in with the raw finish of the frame.

The One Up V2 dropper is known for its length and the Madonnas come specced with generous 180mm drops on the M size and the longest 210mm drop option on the L and XL sizes, and there's also the option to adjust the travel down to your desired amount if you prefer something with a little less drop.

Along with the components, the build also includes the One Up EDC pump in 70cc size. Along with that there's the EDC top cap included to give the option of running the EDC tool inside the steerer tube. 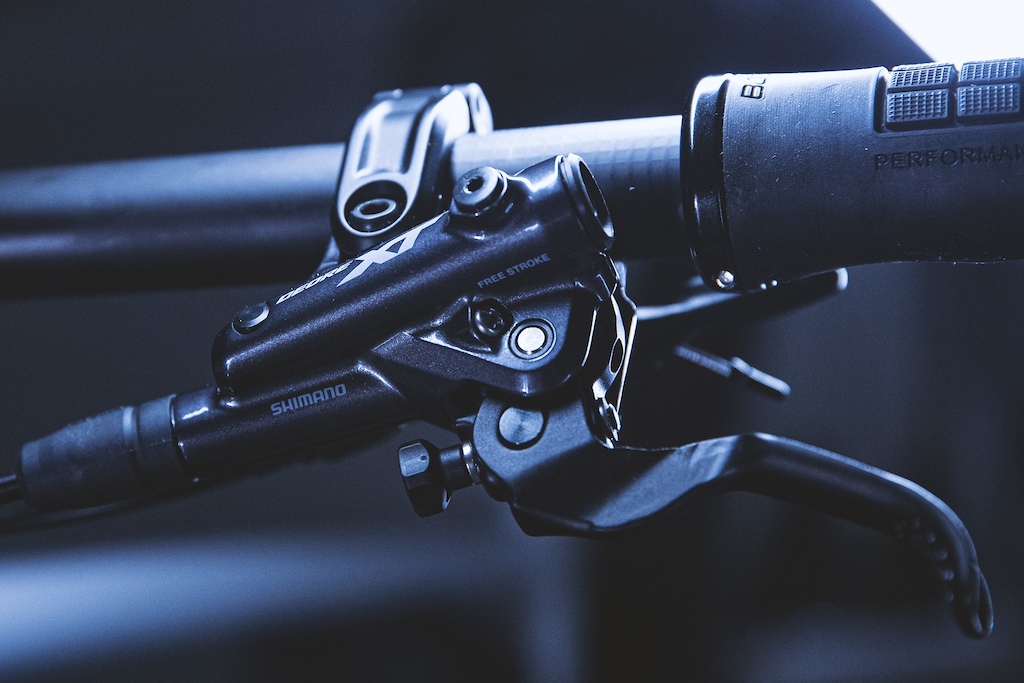 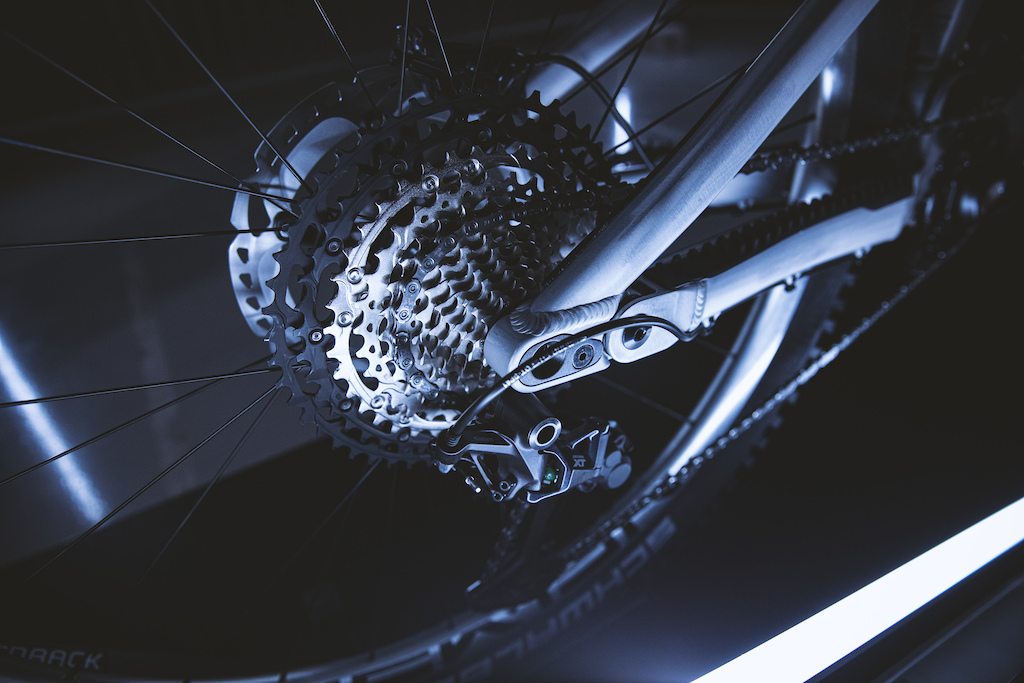 For the drivetrain there, was also an obvious choice for the guys. The Shimano XT 12-speed drivetrain is the workhorse of the Shimano MTB family and the balance of performance, durability and price all bundle together to put it ahead of any other offerings out there. The 170mm cranks give a good mix of ground clearance while maintaining the ability to give good pedalling torque and the combination of chain, cassette, derailleur and shifter all work seamlessly together to give some of the best shifting performance, especially under high load conditions.

It was also Shimano that Bike Components looked too for the brakes, choosing their XT four-piston units combined with 203mm rotors front and rear to match the mood of the bike. 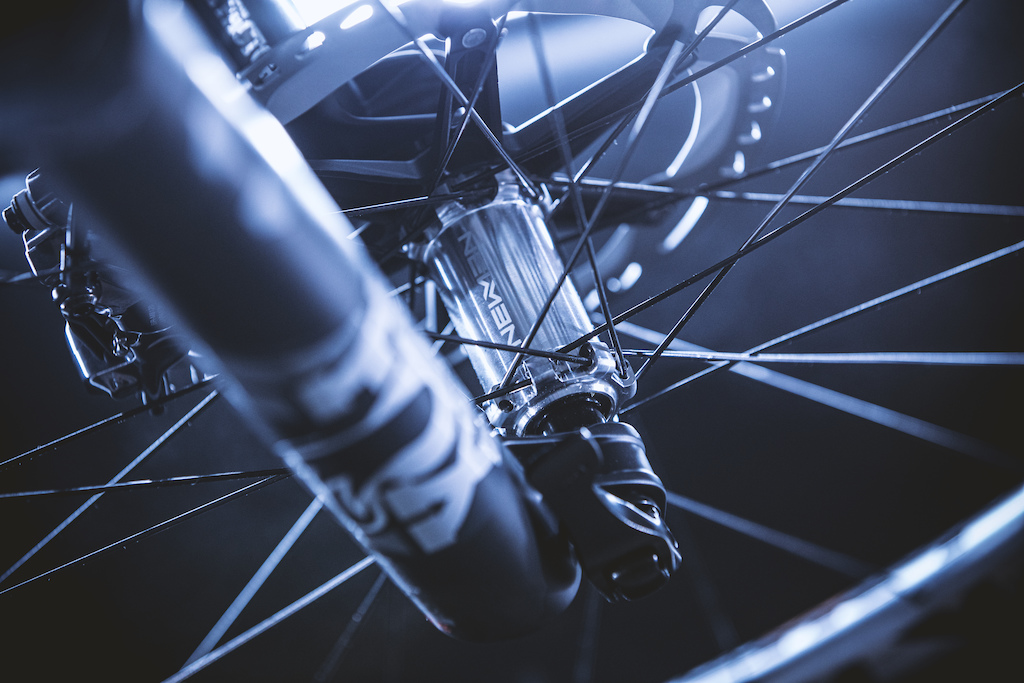 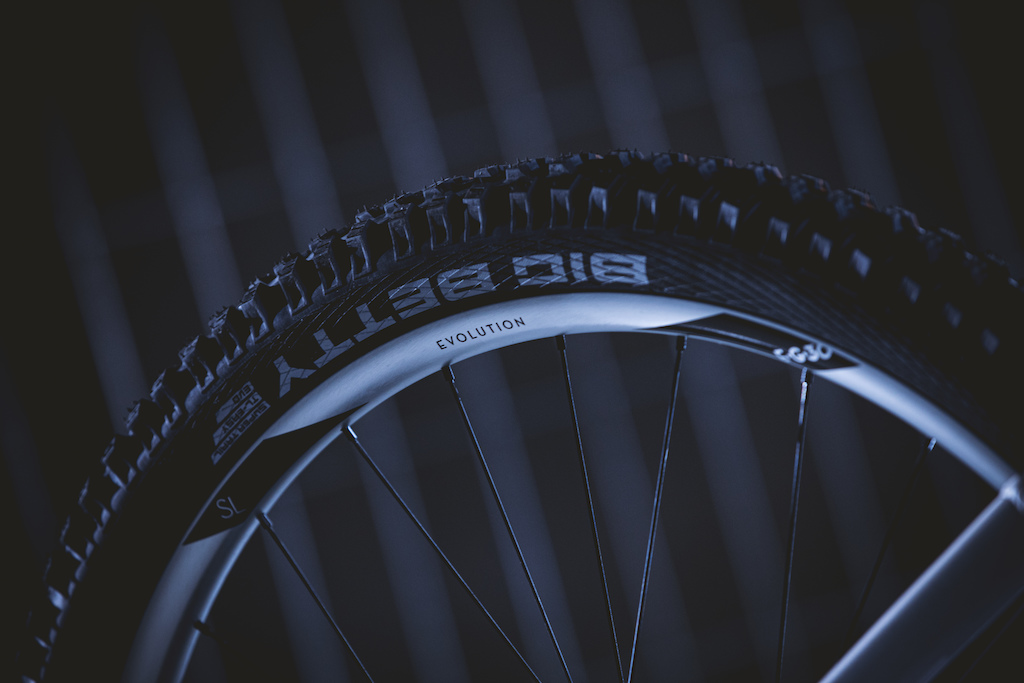 Round the corner from RAAW lies Newman, and it's also a brand favoured by the Bike Components guys on some of their personal bike builds. The Evolution SL E.G.30 wheelset from them are a reinforced version of the Evolution SL rim, laced to their own Fade hubs with Sapim race spokes. The 30mm inner width rims claim some serious impact resistance and we're also a hit when reviewd at Pinkbike. The hubs and rims also come in a frame matching silver colour.

And wrapping those wheels in rubber was also an easy choice for the Bike Components guys, with a certain German tire manufacturer making some of the most go-to tires available. The Schwalbe Magic Mary is a favourite tire for many people, and their latest update to carcasses lead the guys to spec the Super Trail version up front with one of their latest reincarnations, the Big Betty, out back. Both tyres are in the Addix Soft compound. 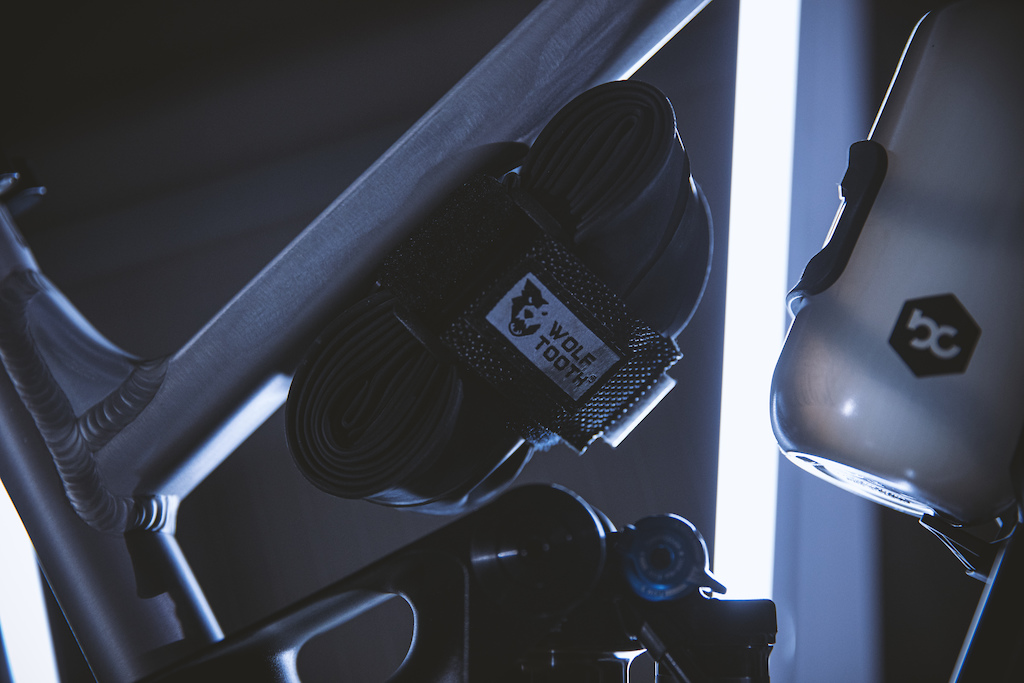 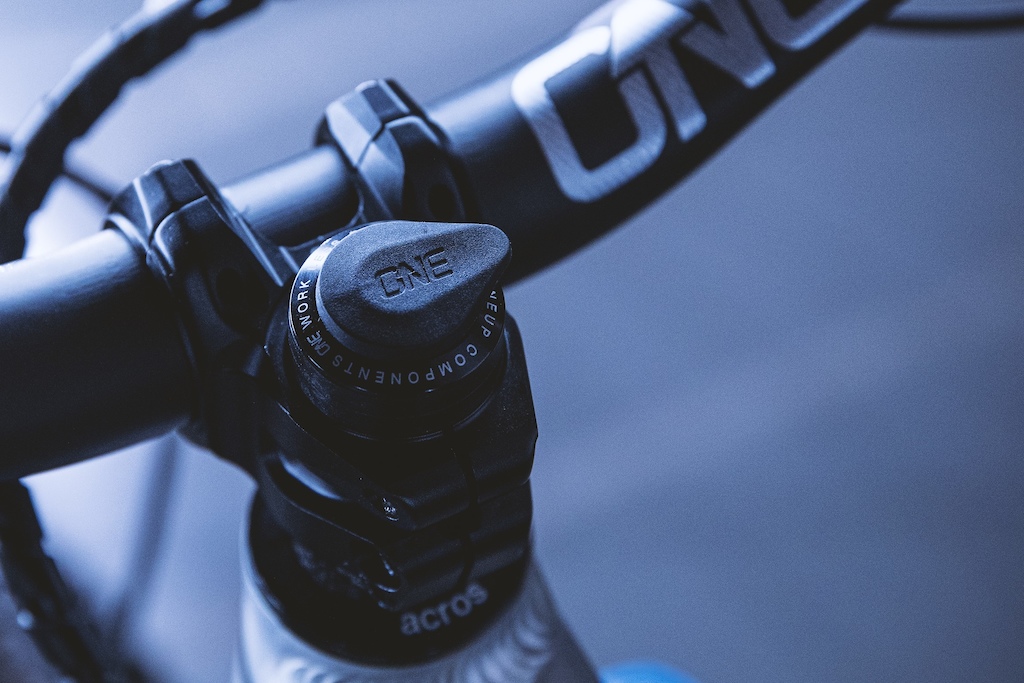 The build is rounded out with grips from Bjorn Bikes, which uses recycled materials to make the grips and an Ergon SM Pro Men saddle in the M/L size. Also, along with the bike, and to take advantage of the storage options available on the Madonna is a Wolf Tooth B-RAD mini strap mount, two spare Schwalbe inner tubes and a pair of tyre levers. Taking advantage of their in-house range of BC Basics components, the guys also include a side access bottle cage and 600ml bottle.

This is a limited edition build, so you'll have to be quick if you want to get hold of one. The whole package sells for €5882.77 and is available at bike-components.de with there being options for delivery worldwide, but do consider that shipping prices will vary depending how far away you are.

The future of these Industry's Choice builds looks bright, with more bikes planned in the future and by the sounds of it with more and more customisation in the builds. Ever wanted to own one of those limited edition race bikes you see at the World Championships? Well, something like that could well be possible from the guys at Bike Components.

Click here to check out more coverage from Across the Pond Beaver 2020.

Mettwurst82 (Sep 9, 2020 at 22:43)
What‘s custom about that? Maybe custom in the eyes of bike components. But not in the eyes of the end consumer. So nothing special here. A bike with preselected components where i still would have to switch drivetrain and brakes to get my custom feeling on here. A nice bike so, but this story is nothing than marketing.

Does this go for all of them or is it a (common) case of bad luck? If it goes for all of them, it seems like a poor choice to spec on a dream build, for a shop that has access to so many other options.

southoftheborder (Sep 9, 2020 at 19:29)
All the Shimano brakes which share that basic lever design suffer from the same wandering bite point. It's inherent to the design, they don't anodize the inner bore of the master cylinder after machining it, as many other brands do. The ServoWave link pushes the piston a little bit off center, it scratches the wall of the MC and the seals stop doing their job.

dro-cfr (Sep 9, 2020 at 20:43)
The latest generation of 4pot Xts is absolute crap. Had flawless previous gen 2pot XTs that I replaced with new 4pots in hopes of more power and found them to perform worse than budget tektros. New Magura MT7s inbound

alexhyland (Sep 10, 2020 at 0:17)
@southoftheborder: so the non- servo wave levers don't have this problem? So putting some cheap Shimano levers on should theoretically fix the problem?

southoftheborder (Sep 10, 2020 at 5:26)
@alexhyland: It'll come ultimately. As I said above, since the MC's inner bore isn't anodized, the piston will end up scoring it sooner or later. A friend re-machined the bore of his XT levers and then 3d-printed a new piston to adjust the tolerances. So far, he's digging it.

Feuerdaggi (Sep 10, 2020 at 2:56)
Good to see Shimano on this bike. There is no other brand hat is closer to the people, shows more passion for the sport. Usually they hide this very well. Great that they finally manage to open up a bit and be part of this project which is free of standard marketing bs.

mrusconi (Sep 13, 2020 at 23:56)
Bought a FOX build RAAW MADONNA V2 (not from bike components). Unbelievably heavy. I've been lied by RAAW about the weight in the pre-sales process. My build with DHX2 shock was 17.5 kg (38.6 lbs). Had to sell it 3 weeks after getting it. BIG RIP OFF!!! Got myself a norco sight instead, whole different level.

BigE-Rosen (Sep 9, 2020 at 16:52)
That looks killer, such great riding in that video, and what great shots of it sitting in that room with all the lights.

bike-components (Sep 10, 2020 at 1:28)
Depending on the country, the price changes due to different amounts of VAT rates.

isla0xtkpiq45ulaey2 (Sep 9, 2020 at 12:47)
You can, at least when buying it from Raaw directly. They offer Float X2 and DHX2 options. Raaw says the DPX2 fits the bike best though, probably because it makes the bike feel a little livelier.

sewer-rat (Sep 10, 2020 at 5:05)
Feature should read - "Bike shop builds bike and sells it like other bike shops that builds bikes and sell them do"

texag (Sep 9, 2020 at 14:09)
How can you expect other countries to engage in commerce with you until you get the troll problem under control?

bike-components (Sep 10, 2020 at 0:22)
Except complete bikes, bike racks and other large items, that require a freight carrier to handle the haulage, we ship to the US. Check out our shipping details her: www.bike-components.de/en/service/shipping