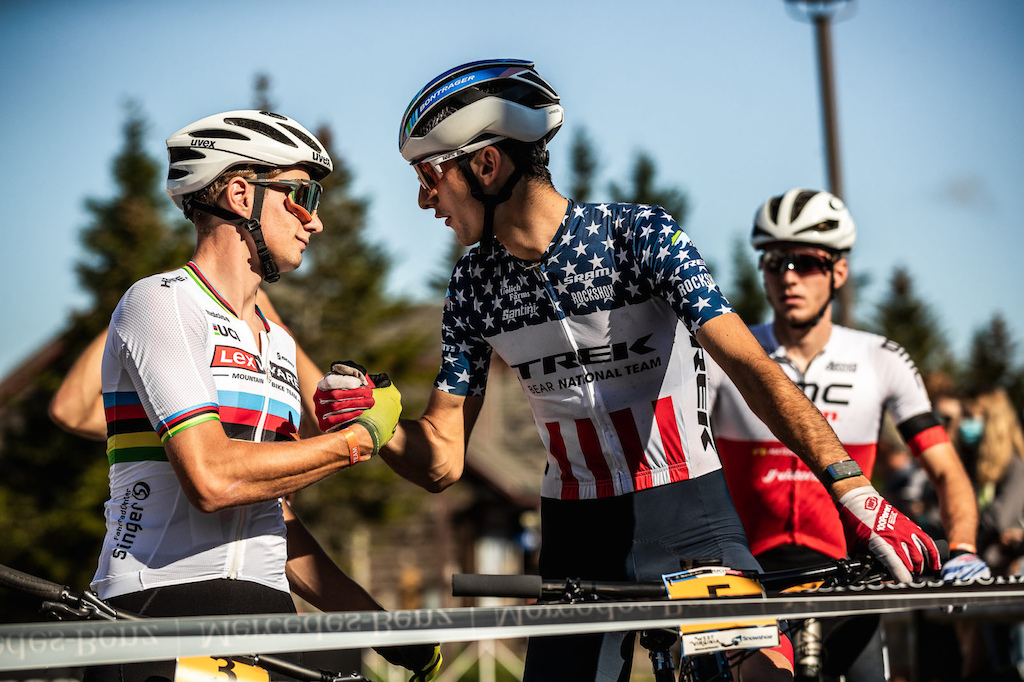 Photo: Trek
Riley Amos shared on Instagram that he has joined Trek Factory Racing after having a breakout 2021 season and taking his first U23 win at Leogang in June.

Amos has had support from Trek in the past as part of Bear Development National Team and traveled with the factory team last season as part of a unique bridge program as he transitioned from domestic racing to World Cups. Now that he's shown what he can do at the top level, he'll become a full-fledged member of Trek Factory Racing for 2022.

Although he finished second, fifth, and first in his first three starts of his first U23 season, Amos hadn't anticipated that success. In an interview at the start of the season, he said he hoped to achieve a single top 10, perhaps, but that his main goal was simply to gain experience and progress as a racer. Winning a race, then having some trouble with both his luck and his fitness through the rest of the season and struggling to earn top-10s, showed him how delicate the winning formula can be. Ultimately, he placed sixth in the U23 overall ranking and plans to improve on that result next season.

Amos was the first American man in history to win a U23 World Cup race, the US's first World Cup win since Howard Grotts stood on top of a junior podium in 2011. Still, at just 19, he's aware that he has a long career ahead of him and doesn't want to rush the process, he recently told Trek's Race Shop.

Have to say that Trek unlike some manufacturer's really is investing in race teams across the disciplines & genders,

All the very best Riley. I like your style. Don't weigh yourself down with expectation, enjoy the ride. Everything will fall into place

Ososmash (Nov 26, 2021 at 7:26)
There has been a huge push among American racers to focus on the process. Which I think makes sense.

KeeganPelton (Nov 26, 2021 at 17:33)
@Muchogusto: oops haha wasn't responding to you. @ski-bike-repeat seems to be fairly out of touch, @Ososmash is correct. American XC is so far behind because we are only now really investing in youth racing, something that European countries have been going hard at for decades. With NICA and more development teams, we're trying to set kids up for long term career success and not burn them out trying to win junior races. Focusing on the process is spot on.

moondustdictator (Nov 24, 2021 at 13:55)
Kid lapped me in a practice xc short track race in Durango. He passed on a steep technical grind and I couldnt believe the output coming from his legs while he was hyperventilating in the most controlled way possible. It was ine of the most intense feats of athleticism I ever seen.

bonjurns (Nov 24, 2021 at 13:05)
With perspective like that, this dude is going to be successful in life- regardless of his stat sheet racing bikes.

Hogfly (Nov 24, 2021 at 22:22)
God I love the vibe of all the crew coming out of Bear National. My 14 year old is a hard core freeride/jump/endurobro/bmx type, and he thinks the Bear National team is cool AF. To the point that he’s actually pretty stoked on competing in XC as well. Great job, Riley. Your out of body experience at oztrails off-road seems to have paid off.

mdubxtreme (Nov 24, 2021 at 11:22)
I believe Bear Development team's bike sponsor is Trek, yes. However this is a move to a full factory team.
Post a Comment