Brendan Fairclough Has Hand Infection Due to Splinter 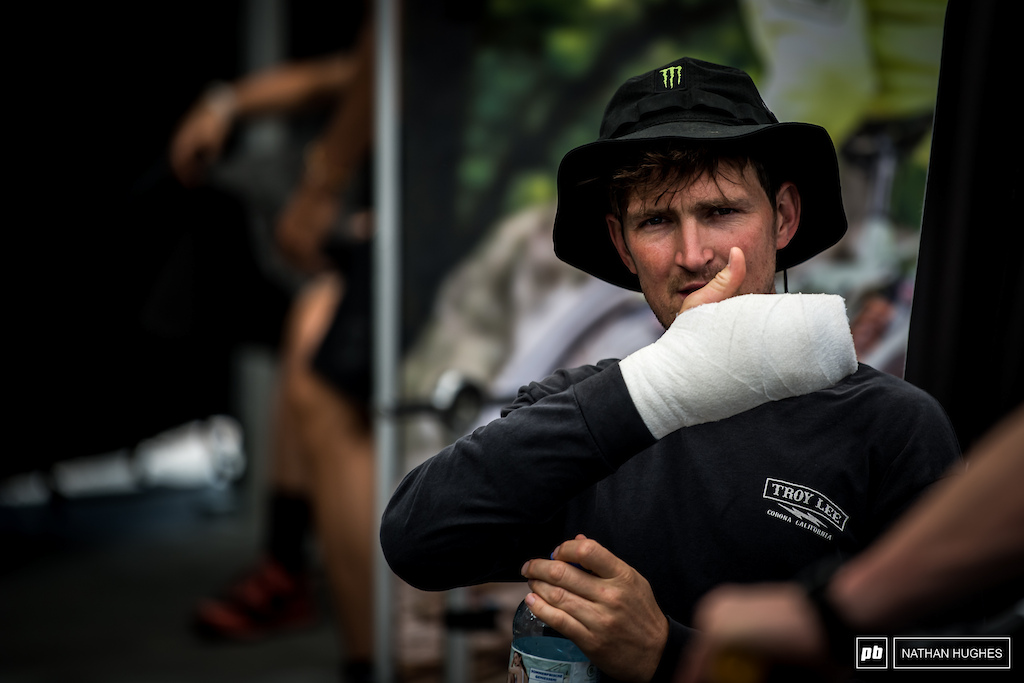 Brendan Fairclough shared on Instagram today that a splinter in his hand led to an infection that required a trip to the hospital after he tried to remove it.

He said in an Instagram story update that he has had the splinter for about three weeks now. In Schladming last week, he tried to "self-operate" and dig it out, but that plan didn't work. After riding yesterday, his hand swelled up badly and felt "like it was on fire," so he went to the hospital, where he was given antibiotics and anti-inflammatories. 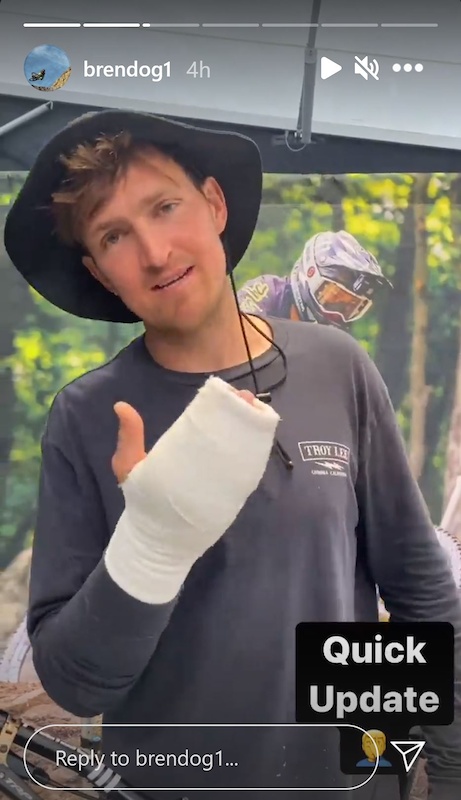 He is currently still on antibiotics and plans to see the doctor again in the morning. He doesn't know yet whether he can ride this weekend, but we hope to see him back on the bike ASAP. We will update you when we know more, and in the meantime, we wish Brendan all the best.

SangamonTaylor (Jun 9, 2021 at 19:12)
@SlinkySammy: dude. Freshman year of college I went out with a girl named Carly who played softball. Was actually painful. She’s married to a woman now.

stalkinghorse (Jun 9, 2021 at 14:10)
Scalpels aren't known for their capable handling. Too twitchy. Looks like now he's a Lefty.

foxinsocks (Jun 9, 2021 at 21:35) (Below Threshold)
Where's the P.C police?
You must jump valiantly to quench the flames of this potentially inappropriate joke before Brendog has a chance to get offended. C'mon.

Touché to you, sir.

conoat (Jun 10, 2021 at 1:23)
everyone leave the splinter removal, hangnails and papercuts to the HERO FRONTLINE WORKERS!

Upduro (Jun 9, 2021 at 14:19)
I remember when I stepped into a sea urchin in Portugal and had a few needles stuck in my heel. Some high af surf hippie at the hostel insisted he knew what he was doing and young and dumb as I was I let him. Didn’t get a single one out. Took the bus to the hospital the next day. Had a few splinters pop out months later still. Get that shit looked at properly, having random pointy things stuck in your extremities is never fun.

Lanebobane (Jun 9, 2021 at 14:32)
I know we report/read on athlete injuries, but infection is a new one compared to the broken/tore things we're used to. Death to bad bacteria!

parkisatool (Jun 10, 2021 at 10:07)
@An-Undocumented-Worker: According to him, he took antibiotics to fight an infection at a race. Those antibiotics were banned by WADA so he got suspended for doping. Funny enough, he is not at the same level now as he was before that happened, so draw your own conclusions...

Now sit back and watch the downvotes roll over you

mjscyclery (Jun 9, 2021 at 14:39)
I had a similar issue with splinters leading to a bad infection. It was likely MRSA or something similar. No amount of traditional antibiotics would get rid of the infection in my thumb.

odbrider (Jun 9, 2021 at 16:16)
Probably all that f*cking around with those makeshift ramps at his house...gotta pay attention to that shit ...septic poisoning can really f*ck you up..been there done that!

Ironchefjon (Jun 10, 2021 at 7:18)
jumps over his sketchy roof with a sketchy ramp he build on his land rover with a sketchy run in, but a splinter is what takes him out. what a mad lad.

cypher74 (Jun 10, 2021 at 9:31)
With all the hand cleanser currently in the world with which you could clean any injuries or tools it’s pretty good going managing to get a an infection from a splinter

pisgahgnar (Jun 9, 2021 at 15:54)
@Ds1234: how does that work internationally? What is he required to pay/who gets billed for an office visit in Austria? Serious question as a curious American who thinks my health system is nuts.

Ds1234 (Jun 9, 2021 at 15:58)
@PTyliszczak: pretty sure the pro teams are fully insured when they're abroad - i remember after brycelands hafjell crash they were joking about whether the insurance will cover it. Sounds like brendan (his team) does since he got all fixed up

parkisatool (Jun 9, 2021 at 18:18) (Below Threshold)
@PTyliszczak: just like anyone in the world you need travel insurance when visiting an other country. In his case the tesm is paying for it. How do you not know that?

dubod22 (Jun 9, 2021 at 19:51)
@parkisatool: Not true. In Europe they have the European Health Card which gives you rights to access the health care system of the country you are in on the condition you are in the European Economic Area (and Switzerland).

Unfortunately, Brexit laid waste to this idea but you can use it until the date on the card expires.

iamamodel (Jun 9, 2021 at 21:16)
@PTyliszczak: Apart from the advice above, some countries have reciprocal health care agreements, for example Australia and the UK. Australia also has agreements with other European countries and NZ.

pisgahgnar (Jun 10, 2021 at 5:39)
@parkisatool: You actually do not always need international insurance. My health insurance through my US employer will cover costs overseas but it is considered out of network and requires separate billing, potentially prepayment when receiving care.

And I'm just curious man. Things can be different all over the world, I'm just asking a question.

transitter (Jun 10, 2021 at 6:13)
@PTyliszczak: crashed at the Leogang motorway in 2007. Needed a bunch of stitches. Private hospital fixed me up pretty good, can hardly see the scars, just handed me the bill when I left, no prepayment. In the end my insurance only paid half the costs because in their eyes I received unnecessary care. Till then I didn’t have international medical costs added to my travel insurance, now I do.