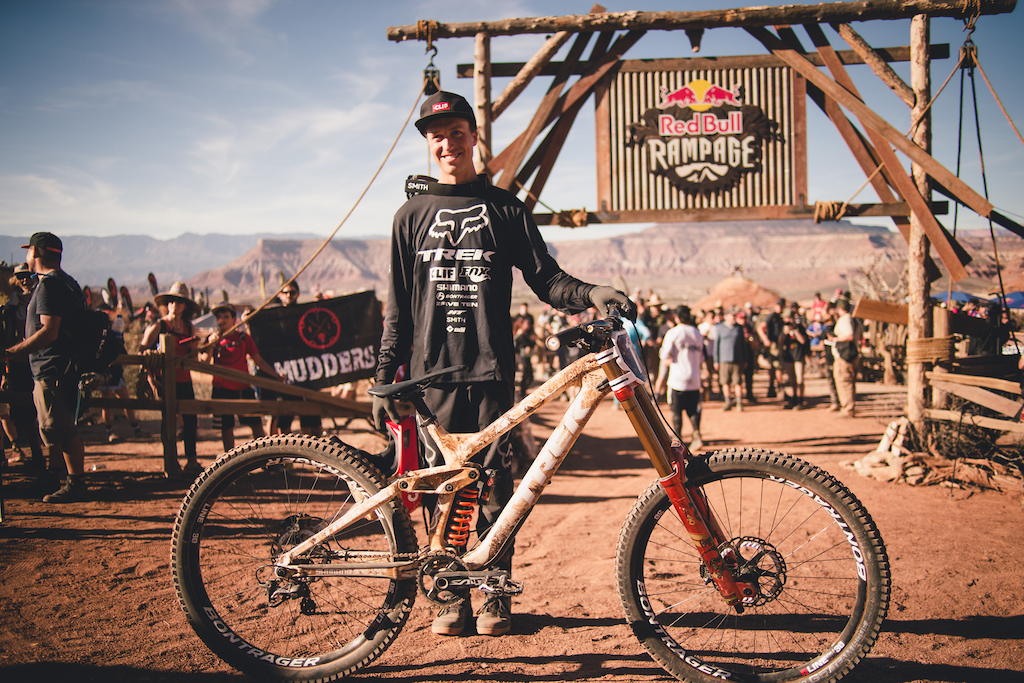 Brett Rheeder after winning Red Bull Rampage on his Trek Session in 2018. Photo by Peter Jamison

After a partnership that lasted nine years, Brett Rheeder is parting ways with Trek Bicycles, announcing today that he has signed a two-year contract with another bike brand.

Brett Rheeder has been a member of the Trek C3 Project since 2012, and during that time he won Red Bull Rampage, the X-Games, became a seven-time Crankworx champion, and the only four-time FMB Slopestyle World Tour champion. He also starred in several feature films, including "NotBad," "UnReal," "Not2Bad" and "Return to Earth."


Brett came to Trek as a flatlander from Ontario and Andrew Shandro worked with him and saw his progression firsthand during his nine years with Trek.


We look forward to seeing where Rheeder lands next and will update you as soon as we have the news.

While I'm here, did you know that in Latin, Sinister means Left and Dexter means Right? Explains a lot, Latin does. Glad they still taught it when I went to high school in the Middle Ages.

Crazy that Trek had three of them at the same time

gypsyjeff (Jan 20, 2022 at 7:37)
Anyone else hoping for Title bicycles?
First company to prioritize jump bikes over racing !

MarcusBrody (Jan 20, 2022 at 7:52)
I just assumed that they were just releasing another celebrity promo.

buckwheat23 (Jan 20, 2022 at 8:21)
@nolimit I had a similar thought when I saw this. Probably need deep pockets to sign someone like Rheeder.

asapyohanes (Jan 20, 2022 at 7:03)
Interesting ... trek is the only brand with a proven high quality slopestyle bike (besides canyon maybe) it's gonna be very intersting who he signs for

CamLamson (Jan 20, 2022 at 7:12)
That is a good point, but in the past years hes seemed to avoid going back to slopestyle. Which has been interesting, it almost seems like he lost motivation.

chakaping (Jan 20, 2022 at 7:14)
@CamLamson: He did a podcast recently(ish) where he said he'd lost motivation for flippy-spinny stuff - and was more motivated by racing DH now.
So he'll probably turn up on a Commencal team next week?

CamLamson (Jan 20, 2022 at 7:18)
@chakaping: Commencal or some other tiny brand with new concepts. He was running that weird looking fork and shock last year, I wouldn't put anything past him.

plyawn (Jan 20, 2022 at 10:21)
With the combination of better "jumpability" in trail/enduro bikes and trends in hyper-groomed slopestyle courses this already very small market has shrunk though, from what I can see. There's just not that many people hitting paved 50+ foot gaps and throwing tailwhips.

Theysayivebeentheone (Jan 20, 2022 at 7:43)
Fuck I see more people leaving brands than signing with them

robito (Jan 20, 2022 at 7:29)
Wow. I don't know if I should congratulate him for the bold/courageous move or ask his friends to go over for a welfare check. I never thought I would see him not on a trek.

clemson (Jan 21, 2022 at 1:22)
you don t need to go out of the shadow when you re shining by yourself ..it was just an awesome team with some outstanding riders and personalities on it ..cam mc caul, semenuk, r-dog, emil .... will always love the not bad series from the c3 team

frampo (Jan 20, 2022 at 10:35)
Rocky Mountain? Carson just left and the maiden has been a proven bike at rampage. They have a history at rampage been there since the start and have been in slopestyle for a long time as well.

tkrug (Jan 20, 2022 at 10:43)
I suspect their stash of Maiden frames is getting pretty low - not sure how stoked he would be on a second hand frame, even with a new paint job.

Could be Rocky, but I don’t see the maiden being a selling feature.

frampo (Jan 20, 2022 at 10:55)
@tkrug: maybe there is something new in the works, also if you look at the history there was the prototype of the maiden back in 2014 when Gully was on rocky. They also built the new slayer as a prototype just called it the pipedream and they built Carson a custom slopestyle bike.

mtnbykr05 (Jan 20, 2022 at 11:10)
@frampo: the Pipedream was a special one-off gratitude build for Wade Simmons meant to replicate his original Rocky Pipedream from early 2000’s with updated geo and parts. Never meant to be a Slayer proto or replacement.

naptime (Jan 20, 2022 at 8:13)
Could any other brand afford him? Maybe spesh? Or a home made brand that could be working with him to develop parts for the title brand, maybe we are one...

Never saw this coming. Thought he was a lifer like Brandon

friendlyneighbourhoodsleuth (Jan 20, 2022 at 12:18)
Maybe a title/hyper thing going on? Would be cool to see that!