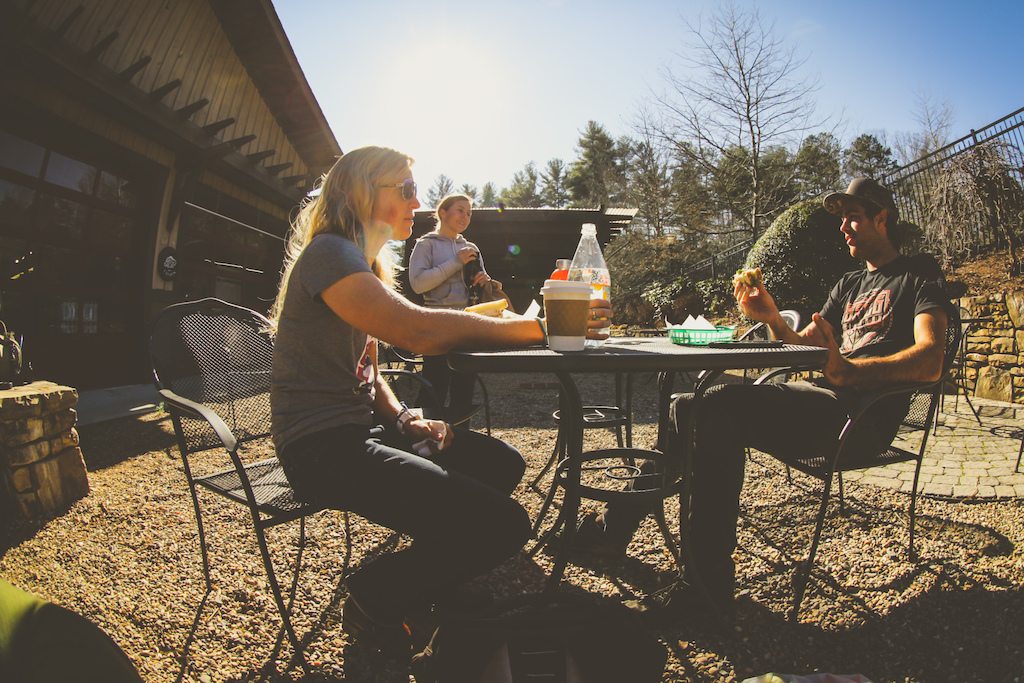 Although they specialize in nearly polar opposite disciplines, pro riders Neko Mulally (Gstaad-SCOTT) and Erin Huck (SCOTT-3Rox) met up for four days of riding outside of Asheville, North Carolina in early December. Like most competitive athletes, they each use the off season to step back, review the season past and plan for the year ahead. And while they wouldn’t seem to have much in common other than occasionally crossing paths at the same UCI venue, they both have “home improvement” projects for the winter. 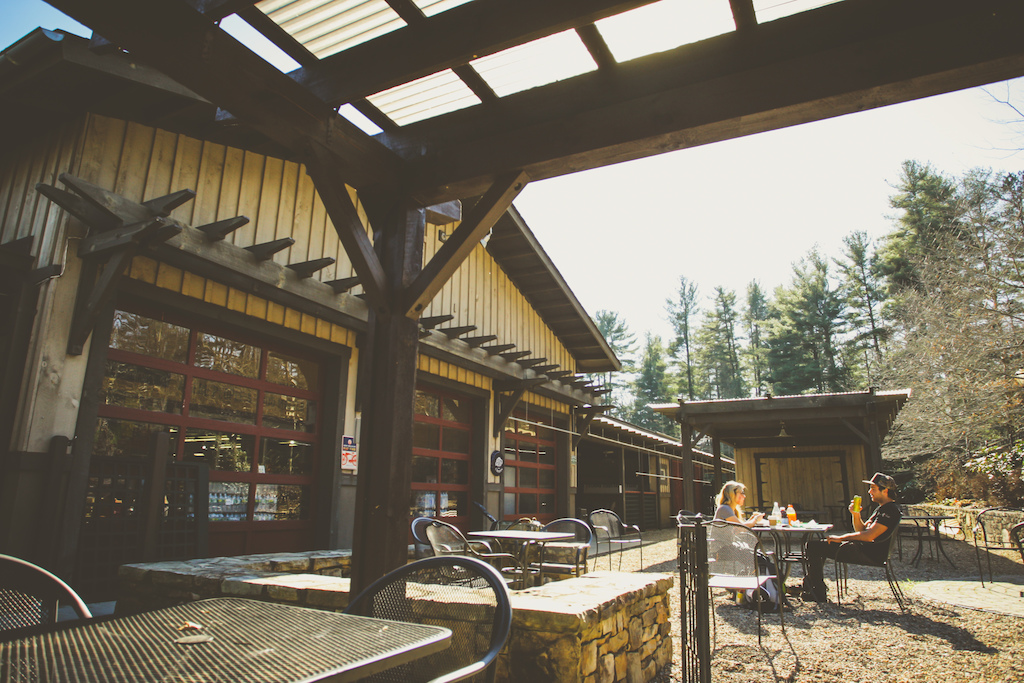 Neko is coming off his first season with Gstaad-SCOTT and he’s trying to get back to the form that saw him snag 4th in the 2014 downhill World Championships. In Erin’s case, after her first year with 3Rox, she’s honing her technical skills in anticipation of a full World Cup XC season and a potential Olympic berth.

Challenges in the rearview mirror for Neko

Reflecting on 2015, Neko said, “I came off a really good result at the end of 2014, got on the new bike, the new team, and was riding on a high of confidence and excitement, but maybe not managing my time well. I was just riding my DH bike all winter,” he said. 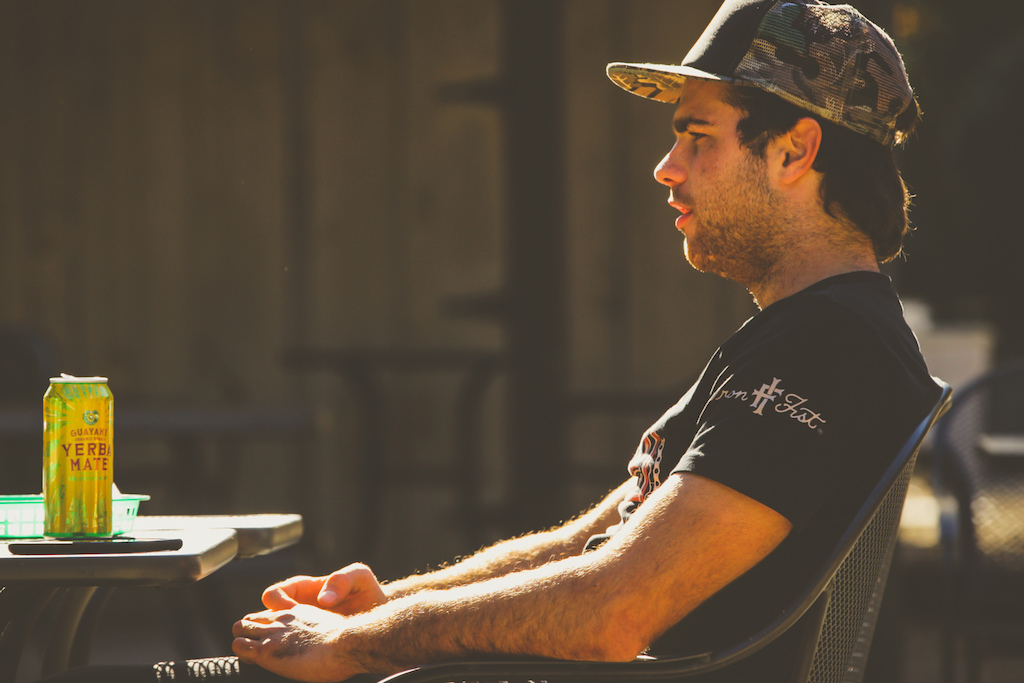 “Then I got to the first race, got a flat tire, and after that, went to the first national where I crashed and hurt my shoulder,” Neko continued. “After that I had to take time off and then immediately go to Europe. All season in Europe, I just didn’t have the feeling I wanted on the bike after the crash.”

At home in Brevard, Neko views the past season as a chance to move ahead for 2016. “Now that the season has been over I’m looking at it with a different perspective,” he said. “Since the end of the season I’ve taken a lot of steps to turn it around for next year, so that I can come back and get better than I ever have.” 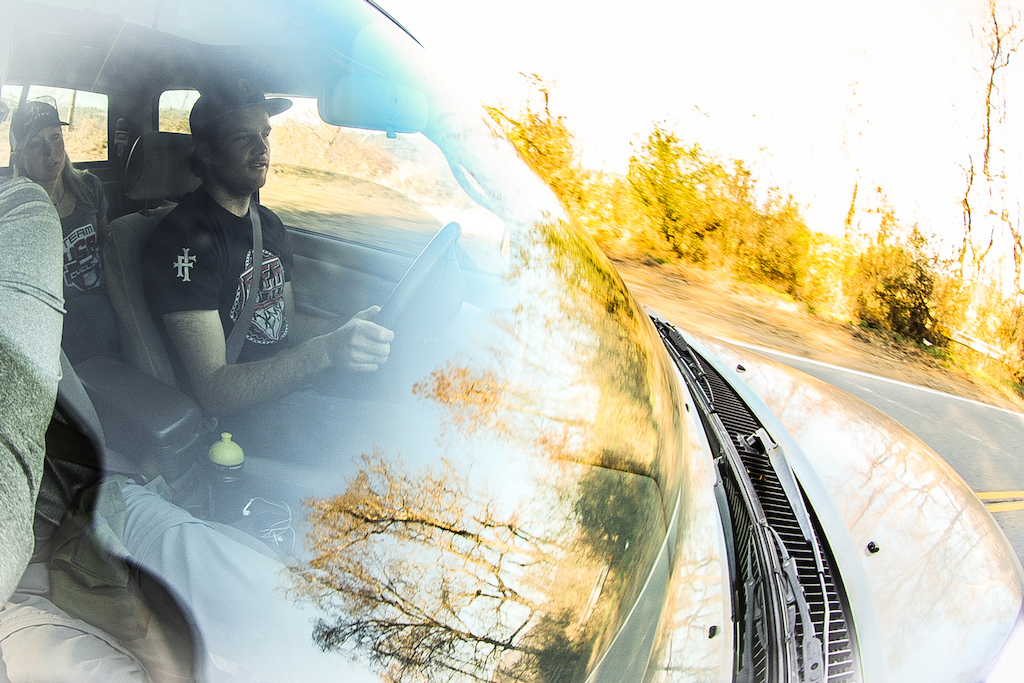 “I’m disappointed that I didn’t have the results I wanted this year and I want to do better for everybody, mainly myself,” Neko concluded. “I’m doing what it takes to do better again and I’m excited to see what happens.”

Erin exits 2015 with a different set of opinions, following her first year with SCOTT-3Rox, - “I’ve never been on a pro team before so that was really next level in terms of support,” said Erin. “The Windham World Cup was a highlight - I managed to get 12th there. To have such a result told me, hey, I’m right there, I can do this!"

As well, Erin was one of just four American women invited to participate in the Rio Olympic XC test event, and it gave her a nudge to keep pushing her cycling career forward.

So to better focus on racing, she’s taking a leave of absence in 2016 from her professional, non-athletic career. “I work for a biomedical device company. I started as an engineer and now I’m a program manager. I’ve been with them for 10 years and I work 32 hours a week,” said Erin. 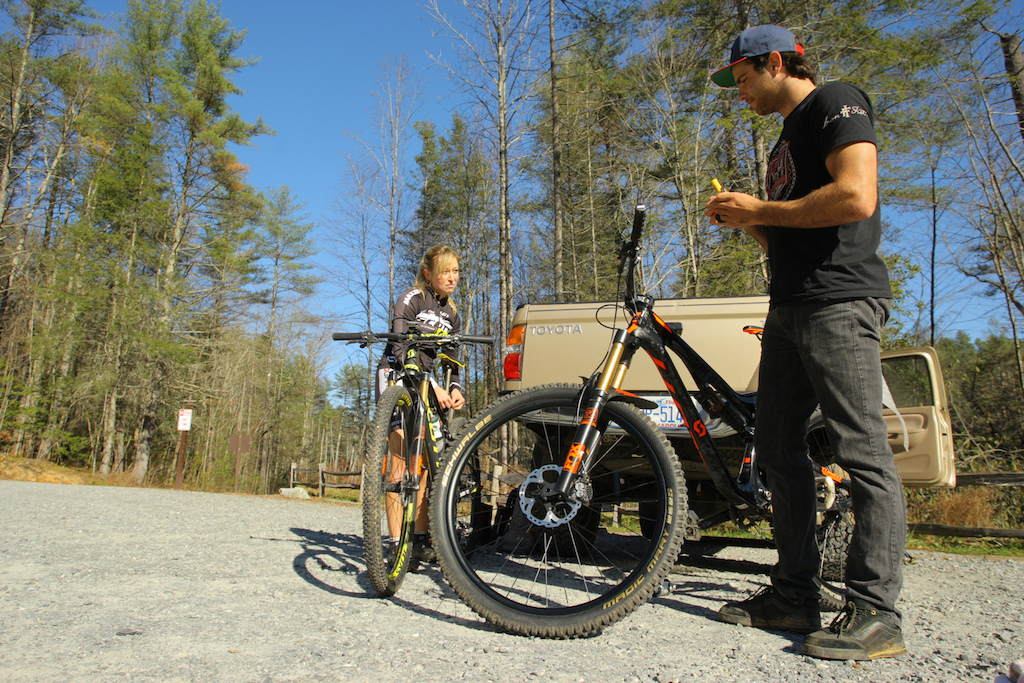 That explains the short four days in Brevard. “I’m still working so I have limited time that I can be out of the office,” said Erin. But starting in February, she will be able direct her full attention to racing.

“Going into 2016 I really want to focus more on the World Cups and make them even a bigger priority,” said Erin. “So I identified that improving my confidence with descending is an area that I can work on.” 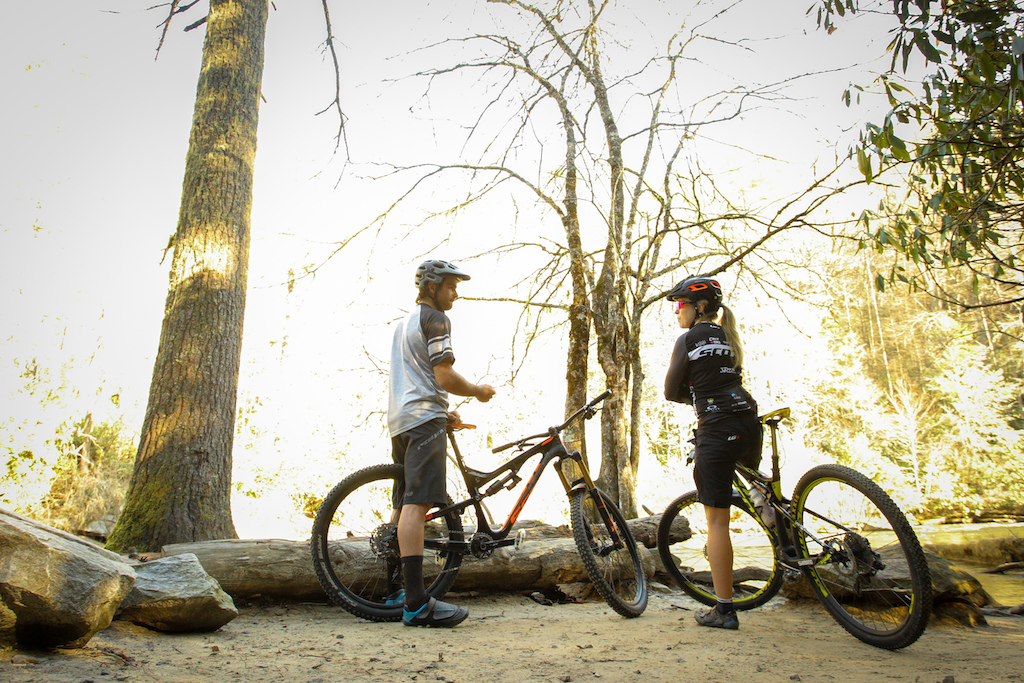 And so after meeting up at the World Championships, Erin planned her trip to Brevard. “Our Scott team pitted with the Gstaad team at worlds in Andorra,” said Erin. “I got to meet Neko there and we just talked about our routines at home where we’re from and he mentioned how awesome the riding was in Brevard, North Carolina, where he lives.”

Erin continued, “I was like, that sounds great, like exactly what I need to work on - riding technical trails with more roots and rocks and wet conditions. Most of what I have on my home trails in Boulder, Colorado is dry, sandy rocks,” she explained. 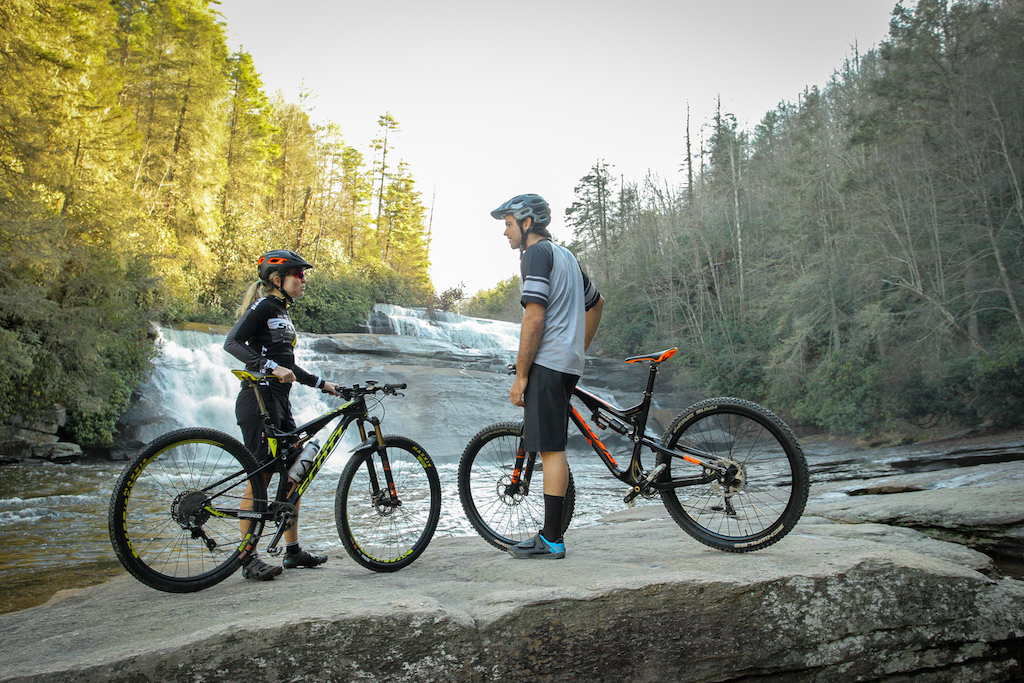 With unseasonably warm and dry conditions in early December, the two riders didn’t get the wet, slippery conditions that Erin was looking for. But every day for four days in a row, they spent up to 4.5 hours on the bikes, looking for challenging terrain. 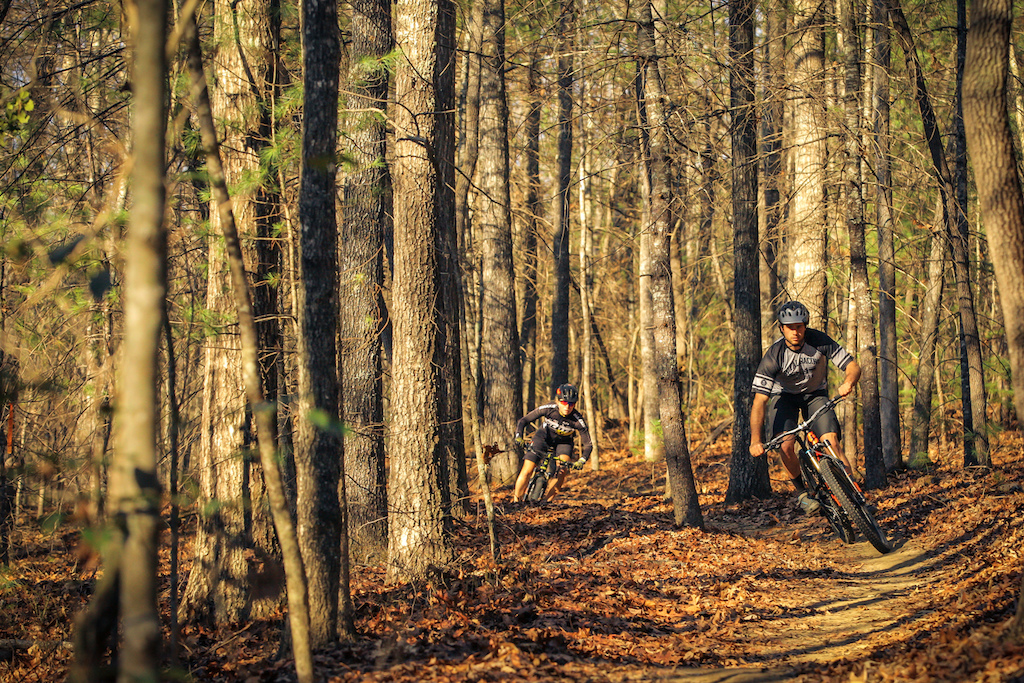 “I was mainly just telling her how to approach the downhills and then getting her to ride a tonne of them,” said Neko. “I mean, we rode so many descents. We would climb for an hour and then have a 15 minute descent. We probably did 8 or 10 of them while she was here. One of the days, we even parked at like 5000 feet and finished at 2500 feet, so we lost a ton of elevation on that ride.”

“Here and there the trails were wet,” said Erin, “But it actually didn’t matter because the trails were covered in leaves. The leaves were super slippery anyway. It was just all about sort of pushing my comfort level and that goal was accomplished,” she said. 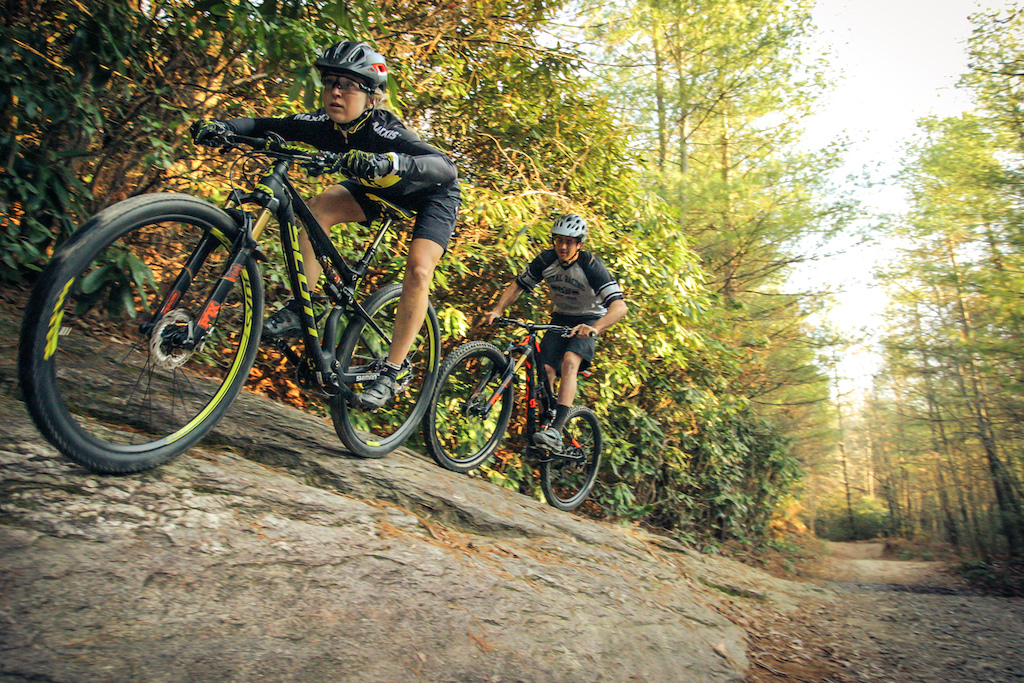 “While we were riding together, I just kept giving her pointers for the downhills,” said Neko. “One of the things she kept saying is how tired her upper body was. So I was trying to tell her to relax more with her upper body and have a looser grip and flow on the trail, instead of tensing up and running into everything which wears you out way quicker than if you just relax and breathe and flow,” he explained.

Neko’s suggestions for faster descending are broadly applicable, - “I used this analogy - it’s funny because my brother used to have an STI and whenever I would drive it I would hold my breath when I shifted, because it was like such a tight clutch like in a race car that I would hold my breath between shifts, because I didn’t want to mess it up. And trying to drive it fast I would definitely drive it so tense. But if I would just relax and breathe, I could drive the car so much better and shift it so much better,” said Neko. 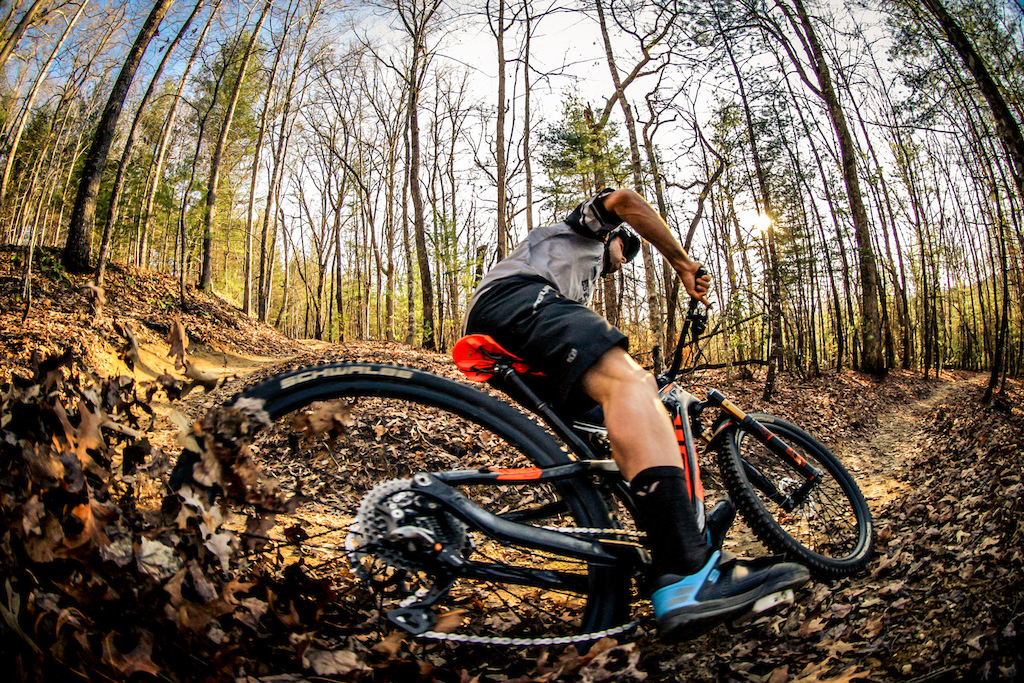 He continued, “So riding with Erin, I was like ‘Don’t hold your breath between shifts! When you’re on the downhill, breathe and relax and be loose’ and it will just happen so much easier. You’ll take the thinking part out of it and just react to what’s coming toward you on the trail.” 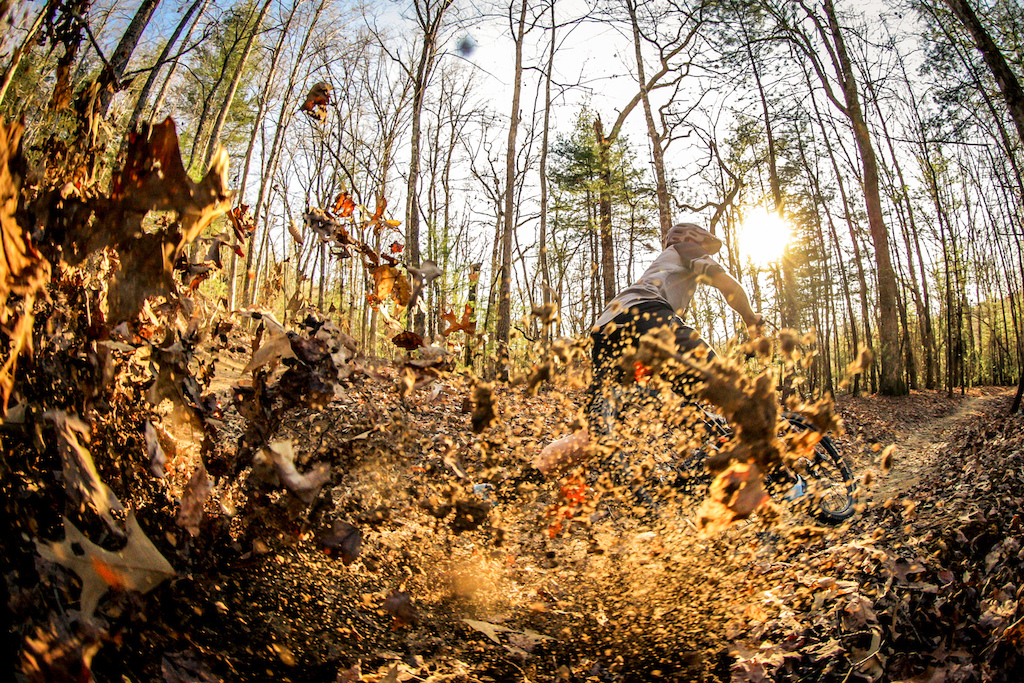 Erin soaked up Neko’s suggestions. “We’d ride for hours just riding trails, not often stopping to session anything. For me it was just, go as fast as you can and try to follow Neko.”

She added, “He would give me pointers. My favorite was ‘Be loose with your grips. Don’t clench your grips super tight.’ That’s one I kept reminding myself as we were riding. I don’t know if he realized what a sponge I was! Every little bit that he shared I was trying to pick up,” said Erin. 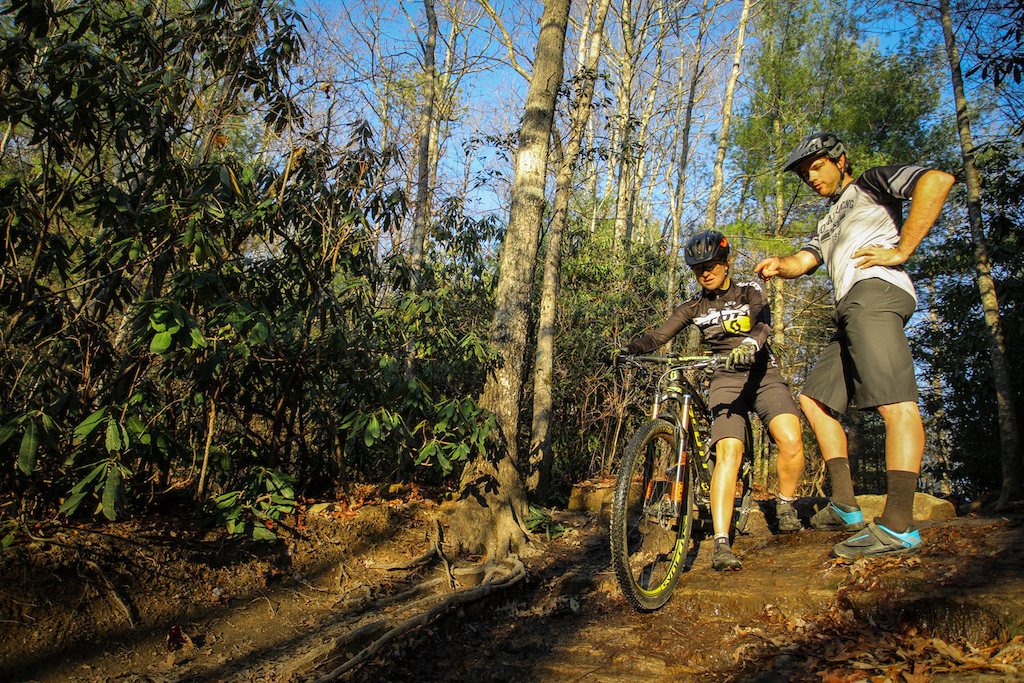 Accountability on the endurance side

On Neko’s side, he’s using the winter for fitness and cross training, which are normally second nature for an endurance rider like Erin. “I work with Carmichael training systems,” said Neko, “and they organize a training program for me during the year. This time of the year it’s cross training, so I’ve done some cyclocross and also doing a lot of gym work.”

The fall and winter are normally a time when he tries to spend more time off the bike, rather than on it. “That’s something that Erin helped a lot with actually, in talking to her, because an endurance rider has to be a lot more accountable for their time on the bike and not spending too much energy, and just their whole season kind of building on itself,” said Neko. “So getting input from her about managing time and time on the bike better, was really helpful.” 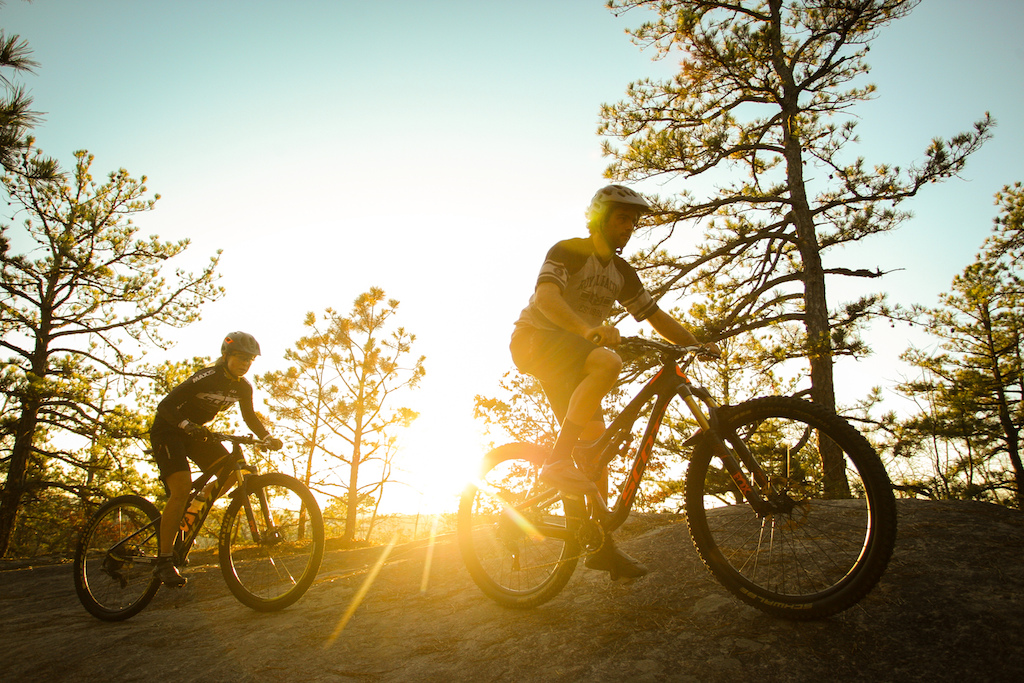 With perfect weather and a killer community at home in Brevard, it could be hard to stay off the bike. But Neko explained it this way, saying, “I’m going to have a lot of mountain bike training coming up soon, so I want to save the stoke for getting on the bike for when I really have do it. I love riding my mountain bike, but I try to limit it a little bit so that when it comes time to treating it like a job, getting out for the training I have to do, I’m excited to get on the bike,” he said. 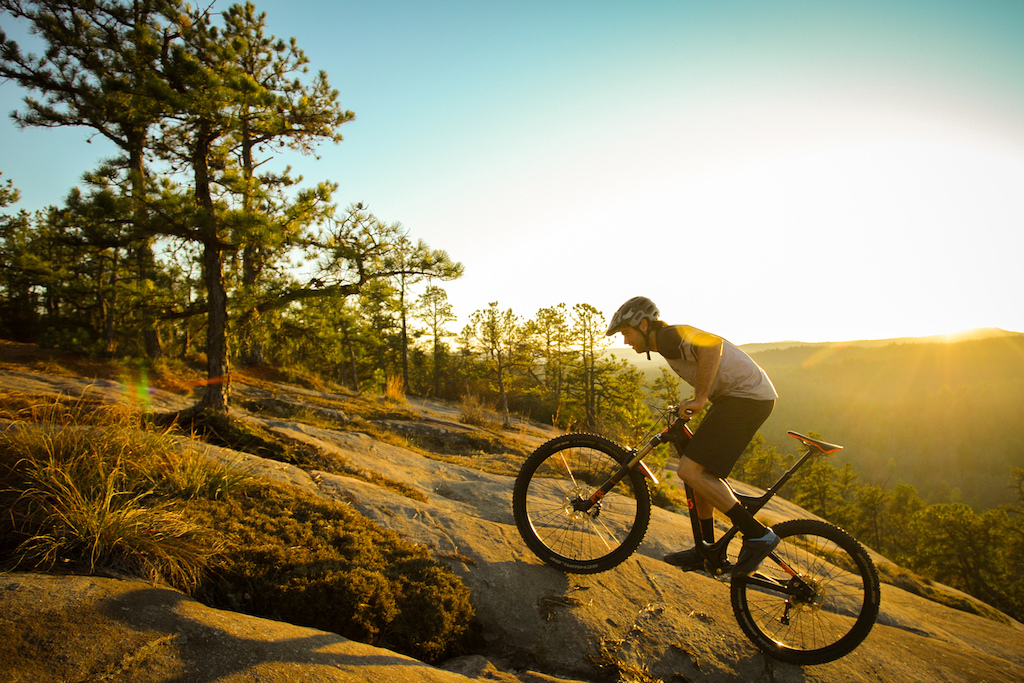 If the work that Erin and Neko are doing in the off season is any indication, then all of us on the spectator side of the course tape should be excited to see what happens in 2016. 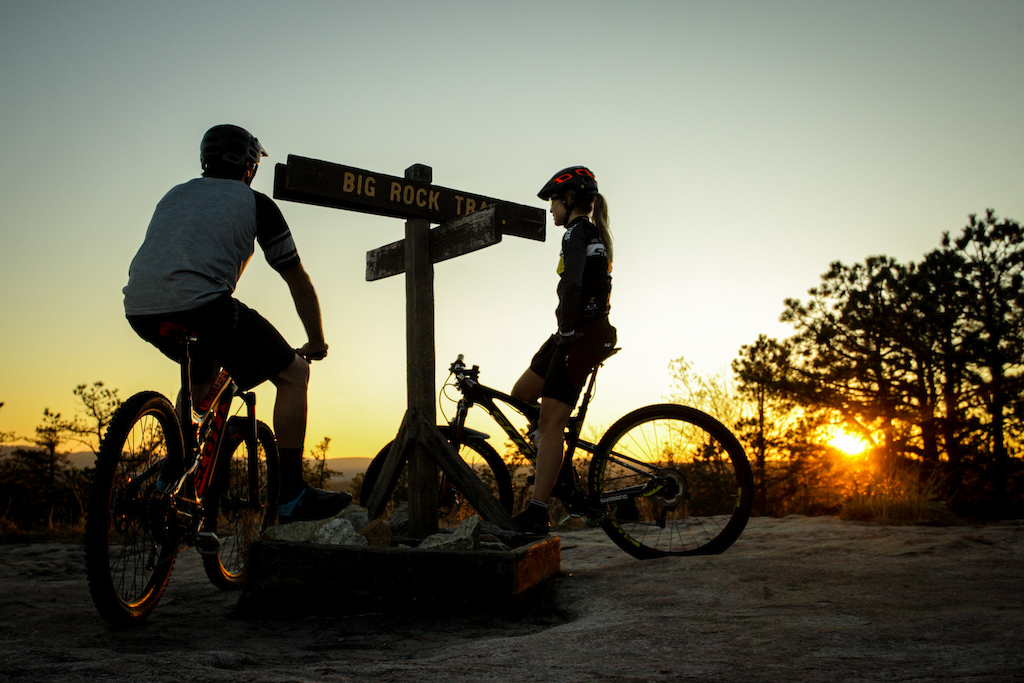 nomad26er (Jan 17, 2016 at 19:54)
Just looking at one of the pic's, looks like she should be utilizing that dropper post she's got on that there steed !Maybe that would alleviate some of the stress in the upper body, IMO .

cptstoney (Jan 18, 2016 at 11:26)
doubt she will rock a dropper on the wc xc bike due to weight. so practicing with it up makes sense. i dont always drop mine when i do fun lil hits. i got used to doing the same things with it up so it doesnt bother me.

RyanC318 (Jan 20, 2016 at 5:14)
I feel like with the dropping weights of droppers, we will start to see them more often on the pro XC circuit. I have been using one for the past year on my XC bike and I feel much faster and confident down descents.

metaam (Jan 21, 2016 at 9:51)
It's a bit like the argument for disc brakes and suspension forks,added weight for sure but undoubtedly worth it for added performance IMO

querent (Jan 17, 2016 at 7:33)
Nice! My wife and I spend a couple of days in Brevard just before Thanksgiving. Had a great time riding mostly DuPont. It looks like a lot of the photos were taken there! Just need to stop by The Hub for a beer after the ride! Good times. I hope Neko has some better results this year. Seems like he's off to a good start.