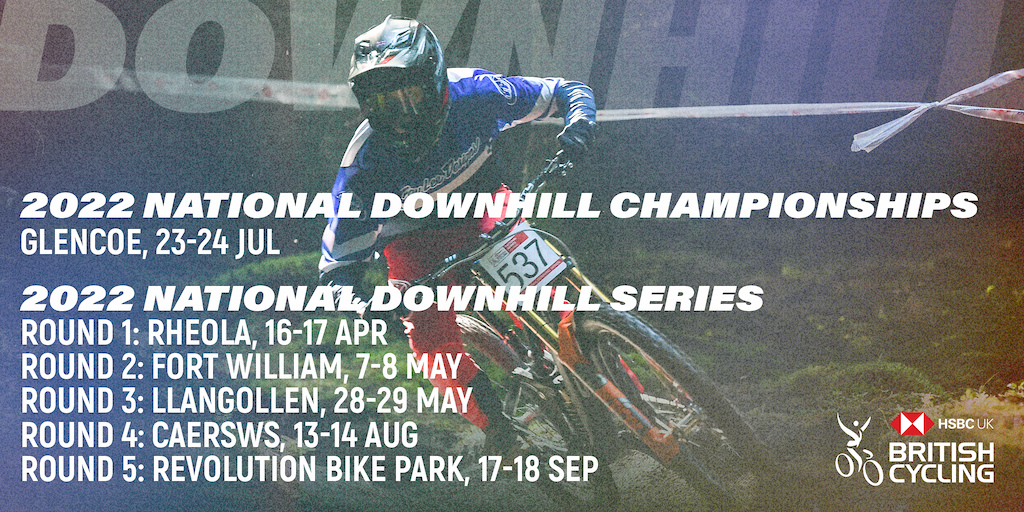 Also confirmed today are the dates and venues for the National Downhill Series. The series is to be delivered by five separate organisers, beginning in Rheola in April. Round two will be a UCI C1 in Fort William, followed by a UCI C2 event in Llangollen for round three.
The series ends with rounds in Caersws and at Revolution Bike Park, which hosted the national championships in 2019.
The 2022 national championships will make a welcome return to Glencoe, which last hosted the showpiece event in 2018, and means that both the downhill and cross-country national championships will be held in Scotland across the same weekend from 23-24 July.
A close-fought 2021 downhill series ended in victories for Roger Novack Vieira and Stacey Fisher, while Matt Walker and Katherine Sharp were victorious in the national championships at Rhyd-y-Felin in July. 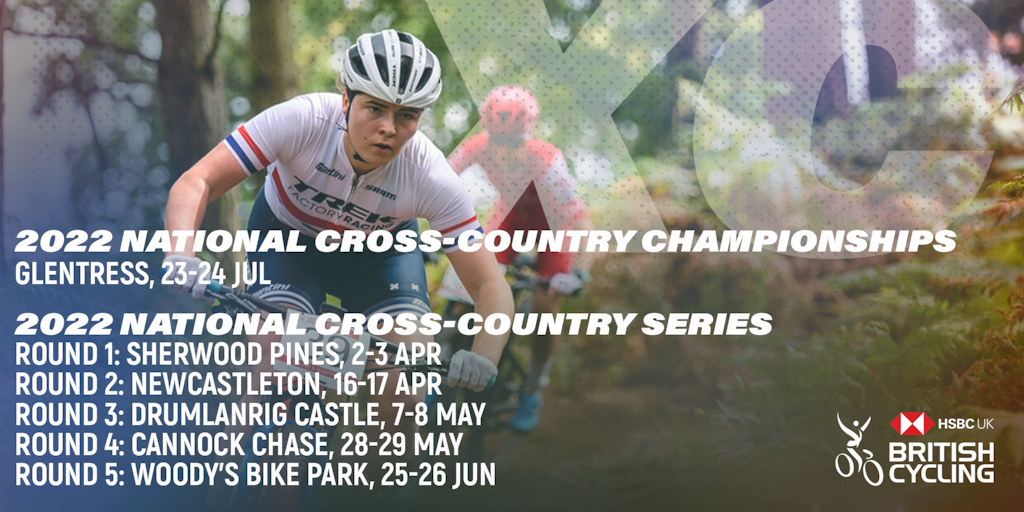 Kicking off in April at popular Nottinghamshire venue, Sherwood Pines, the cross-country series will then head north to Newcastleton and Drumlanrig Castle for rounds two and three, and Cannock Chase makes a welcome return to the schedule for round four.
The series concludes at Woody’s Bike Park in Fowey, which successfully hosted its debut national series event in 2021, and we are pleased to announce that next year’s event has been awarded UCI C1 classification.
A favourite of the Scottish MTB scene, Glentress will host the 2022 national championships, having last hosted a round of the national series in 2019.
In the 2022 series Jane Barr and Ben Wadey will be defending their titles, while Isla Short and Frazer Clacherty will be hoping to hold on to the national champions’ jerseys they collected this summer at Plymouth’s Newnham Park. 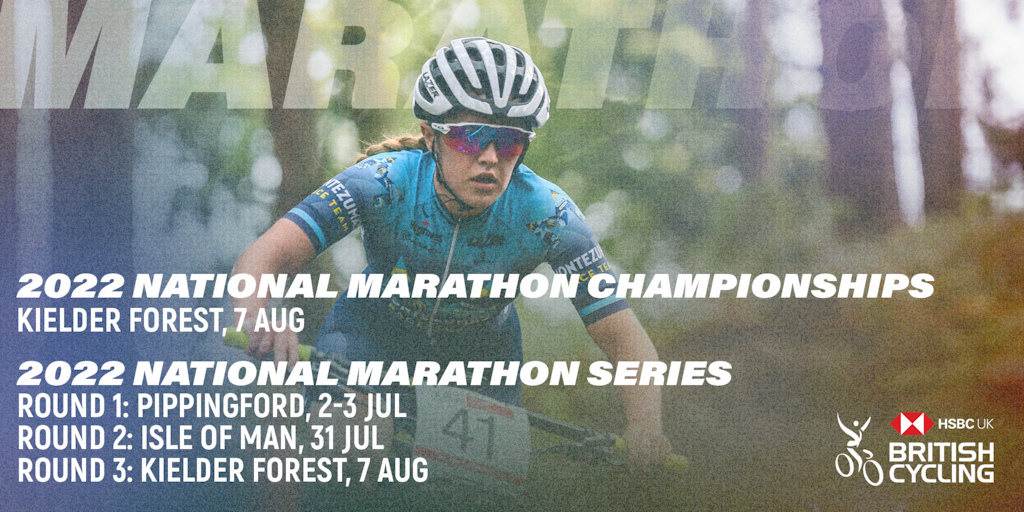 In a landmark moment for the discipline, 2022 will see the first-ever national series for mountain bike marathon. The series will feature one round per month from July through to September, beginning in Pippingford, while the third round in Kielder Forest will double up as the National Marathon Championships. Jacob Scott and Isla Short will return as defending champions.
Full calendars

KrisLord (Nov 25, 2021 at 3:44)
Sending tired riders to race down technical tracks with only one practice run sounds like an insurance nightmare. I'm not surprised they won't touch it, especially considering previous accidents in DH events. With downhill races you have to have be shown to have two practice runs before you are allowed to race. This is for a good reason.

fatduke (Nov 25, 2021 at 3:59)
@KrisLord: there's only a few blind enduro races in the UK. Most you get a day practice and by race day you're too knackered to go race pace and get swept up by the grim sweeper and have to go back to the event area knowing that you didn't need to practice all the stages and that those beers last night were a bad idea and that dodgy burger van that charged you £7.50 for rat meat was also a bad idea.

weeksy59 (Nov 25, 2021 at 4:09)
@fatduke: LOL that certainly sounds like some of the Southerns.. you get to 12:00 having ridden 5 stages and barely survived, then you have to go back out and do it all again and somehow survive that too. Some days you survive... some days you question your sanity.

jaame (Nov 25, 2021 at 6:56)
@fatduke: I have also wondered why they are so effing long. Who wants to ride 40km on two consecutive days, with only 6.8km of timed downhills?
Surely they can make the races more compact. I would love a 20km loop with seven stages, something like that. 40km is a like a weekly summer evening ride, with as much talking as gassing it.

KrisLord (Nov 25, 2021 at 3:51)
I think the DH calendar is spot on. Good range of tracks and all (potentially) quick uplifts.
Good to see that the Fort William and Llangollen are UCI Cat races too. Not been any of those in the UK for years.
Fingers crossed this attracts a good turnout of Pro riders back to UK racing again.

abennett219 (Nov 25, 2021 at 2:55)
Shame to see Hadleigh Park not on the XC list - even the local races have stopped due to the council letting the place fall to pieces. So much for the "Olympic legacy"

chriss78 (Nov 25, 2021 at 4:01)
Yeah it's my local track it's a disgrace. I think they are trying to close it due to conflicts with dog walker's etc .. TBH they have more interest with running races, more money, less stress.

betsie (Nov 25, 2021 at 1:31)
Fort William and Glencoe should be rad as only a few hours south, the rest in Wales means a tough drive if northern folk want to do nationals. Would love to see Golspie in a nationals, could have the longest, gnarliest track in the UK there with a fire road too to bottom for uplift.

betsie (Nov 25, 2021 at 2:38)
@weeksy59: totally.
It's a shame Hamsterly didn't really work out last year and Inners was super wet with the worst uplift of all time, so there are not many options.

I remember talking about Golspie and Laggan (I started a crazy gnarly Dh track there which would have been epic) when Si was doing the National Series. Si was great for wanting to embrace new venues and diversify the sport.
Going to Wales is cool for me as it's like riding somewhere new with a dirt type that we just don't have up here, pretty much a new sport. Getting up to speed just doesn't happen in a days practice.

weeksy59 (Nov 25, 2021 at 3:14)
@betsie: I'm going to use "Getting up to speed just doesn't happen in a days practice." as an excuse for my performances in Southern Enduro series this year

Enduro though... So many folk treat it like a Dh and head to practice for weeks before the next race. They should just ride Dh and be happy.