Join Pinkbike  Login
It looks like FMD Racing is officially riding on Canyon for 2020 as British Cycling leaked the "Canyon Collective FMD" team name earlier this week and Tahnee and Kaos Seagrave shared the below videos of themselves riding on Canyon bikes today. You don't have to be eagle-eyed to spot the details of the Canyon Sender that Tahnee is on or the bright blue Canyon Spectral that Kaos is riding in the video. 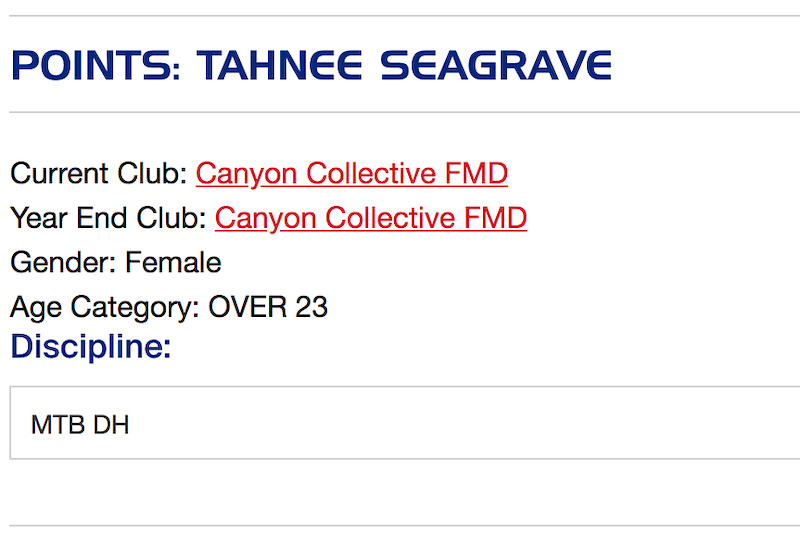 British Cycling may just have leaked the biggest rumour of the off season as Tahnee and Kaos Seagrave are now listed as riding for the "Canyon Collective FMD" team on its website.

An eagle-eyed dh fan spotted this and posted it on Vital's forums and it seems to confirm our suspicions that Tahnee, Kaos and the rest of the FMD team will be running Canyon frames next year with Canyon also becoming the lead sponsor, taking over from Transition/Muc Off. We also found a third rider, Dennis Luffman, listed under the Canyon Collective FMD team on the British Cycling website. Dennis has been racing for the Transition Muc Off Team as a youth and looks to be making the step up to the junior World Cup series with the team next year.

FMD announced they were no longer racing on Transition frames last week however speculation that the team would be on Canyon has been swirling since the end of the race season. We suspect this means that Canyon will be fielding two teams on the circuit next year with Troy Brosnan already confirmed on its factory program and FMD remaining an independent team but running Canyon frames.

Other evidence from the team has been this cryptic Instagram post showing Steve Peat and the caption, "Looking forward to working with some legends in 2020!". We’ve seen two theories about this one, one is that the team will be running Royal Racing kit next year but we believe this is unlikely given Tahnee’s close relationship with Fox. We think it’s more likely a bit of misdirection, and the team is actually referring to Peaty’s long-time rival, Fabien Barel, who is closely involved with Canyon's racing programs.

Either way, we expect the full news from the team to drop in the new year.

jaame (Jan 2, 2020 at 0:37)
@makripper: they weren’t very good from what I remember. The actual lever was very thin metal with plastic on the outside and it bent at the threads. Then they changed it to hexagonal metal without the plastic cover and it cut into your hands. Interesting idea though.

elliottglynn (Dec 30, 2019 at 5:57)
They're on canyon, Millie Johnset put up a post with Kaos on a sender and quickly took it down

Rudy2455 (Dec 30, 2019 at 7:56)
Wow this is way more pleasant than finding out in two days with an official press release. I’m sure FMD are stoked. Why does it feel like I’m following a gossip rag and not a bike news site lately?

sino428 (Dec 30, 2019 at 9:03)
Well this is actually how a real "news" site would work. Real "news" and real "journalists" report information on the topics they cover as soon as they can verify it.

hamncheez (Dec 30, 2019 at 8:59)
It was rumored they were going to Canyon like 4 months ago when Tahnee was spotted at their headquarters and riding their bike.

maxyedor (Dec 30, 2019 at 7:05)
The biggest surprise here is that they care enough about DH to update the website.

werics (Dec 30, 2019 at 12:32)
I believe they have recently, but I can't recall with much certainty. It may have been another big-name MTB move, but this story has happened before, I do believe.

sino428 (Dec 30, 2019 at 22:20)
Is it really a screw up? Do they care? Should they even care? Obviously someone from the team registered the new team name and riders. Is it British cyclings responsibility to worry or care about if or when FMD is planning a team announcement?

JDFF (Dec 30, 2019 at 5:37)
Sounds unlikely, but if FMD ran Royal Racing kits that would be interesting being that they have not had a women's specific line of wear. It makes sense Tahnee would stay with Fox also. If a Royal/FMD thing happened, would be cool to see a Royal Racing women's line pop up.

"We’ve seen two theories about this one, one is that the team will be running Royal Racing kit next year but we believe this is unlikely given Tahnee’s close relationship with Fox."

dakuan (Dec 30, 2019 at 6:13)
@catweasel: time to take Tahnee off the fantasy DH team. Dog farts seal better than that nonsense. And they aren't full of fecking glitter.

JDFF (Dec 30, 2019 at 6:55)
@catweasel: I have heard that they have made improvements from first round of sealant? Can anyone comment on that? I have a few buddies that have been using Peaty's Sealant and have not had issues.

WAKIdesigns (Dec 30, 2019 at 9:22)
@mtbgeartech: I had orange this season and it seals punctures rather poorly. I am yet to find something that I like more than Stans or Joe’s.

mtbgeartech (Dec 30, 2019 at 9:40)
@WAKIdesigns: Good to know. I'm running Stan's now but had decent luck with Orange although it was on a trail bike and I didn't have punctures... It sealed the tire on the rim well at least.

WAKIdesigns (Dec 30, 2019 at 9:47)
@mtbgeartech: It matters less these days because of availability of tire plugs. But I just prefer to be able to get dow the mountain and fix the hole there rather than on some muddy, steep slope.

groghunter (Dec 30, 2019 at 10:08)
@mtbgeartech: biggest problems I had with orange is that it seemed to make myself, and other peoples rims come unsealed, usually where the valve went through the tape. seemed to crop up before airing up prior to a ride, and not be fixable without retaping the rim.

Ghostifari (Dec 30, 2019 at 21:08)
@JDFF: @mtbgeartech @dakuan I have been running Peat's Sealent in my tires all summer here in SoCal, land of sharp rocks and thick thorns and have nothing but great luck sealing back up the holes.

JDFF (Dec 31, 2019 at 1:52)
@Ghostifari: I wonder how much humidity and temperatures play into performance of tire sealant. It is plausible that sealant performance could vary per climate. We certainly know that some sealants dry out faster in warm/dry climates, so other characteristics arent too far fetched.

mtbgeartech (Dec 31, 2019 at 4:14)
@Ghostifari: It seals punctures fine. For some reason It didn't seal the bead well for me on SC Reserve rims. I change tires often and Peaty's is just too messy to clean out of a tire vs Stan's. I have tires that I can't use anymore because there's so much dried sealant and glitter on the bead. I don't feel like resorting to sandpaper to remove it.

JDFF (Dec 31, 2019 at 5:47)
@mtbgeartech: good to know. Im in the same boat SC Reserves and frequently change (and reuse) tires per conditions. Does the glitter in Peaty's seem to be the problem once it drys on the bead?

jzPV (Jan 3, 2020 at 10:58)
@JDFF: I use Peatys for 2 years or something now, don't know which badge, and it works. Doesn't dry up quick and I've had a thorn in the tire and only noticed it when changing the sealant. And my tires don't get destroyed anymore (no sweaty sidewalls) so I won't buy anything with Ammonia anymore. I've had issues getting a tubeless road tire sealed (Vittoria Corsa Control) but that's more the tires fault... but if your sidewall is porous and not airtight Peatys may be too thick to act... dilute it with water then

lou-talks-mtb (Dec 30, 2019 at 6:06)
gotta love private detective skills being applied to their maximum potential around this time of the year

Bmontgomery87 (Dec 30, 2019 at 17:02)
If anything they’re using the Peatys brand. I can’t imagine Tahnee riding for Royal, she likes having custom kits and they can’t even be bothered to have more than one color of dh pants.

Janes28 (Jan 3, 2020 at 14:12)
Tahnee won't be wearing Royal Racing kits as she stated in a comment on her latest post of her on the Canyon bike. She sais she will still be wearing the sickest kit as she is still sponsored by Fox.

And last but questionably least...We Are Never Getting Back Together: Taylor Swift

korev (Dec 31, 2019 at 1:29)
Anna Newkirk is on Canyon too and will move up to the Senior Women category this year, hopefully Canyon will keep her too

Crisskan (Jan 6, 2020 at 22:57)
How are those Spectral chainstays holding up? And make sure to tighten the linkage bolts every five minutes or so ^^

I am starting to think it is like the "Bobs" meeting in Office Space..."What would you say you do here???"

This is like UCI's response to the timeliness of addressing injured athletes in 2019.

justanotherusername (Dec 30, 2019 at 7:40)
You are probably fasterer than her, ride bigger gnar and keep it more real though, innit?