Coming off of a massive block of training in June, I was now geared to get some racing back in the legs. June also marked the hardest month I’ve ever done on the bike. Throw in some BC cross-country races, my first Enduro race and great times at home with family and friends meant it was well spent.

Approaching a Canada Cup in Sudbury the weekend before Nationals was the first test. A big goal was staying consistent with results and to improve my second overall in the Canada Cup series. The race went alright, although fifth place on the podium is good, it’s not what I wanted. Plus, my body didn’t perform the way I know it was capable of. Satisfied with how I battled and made the most of what cards I was dealt with on the day. 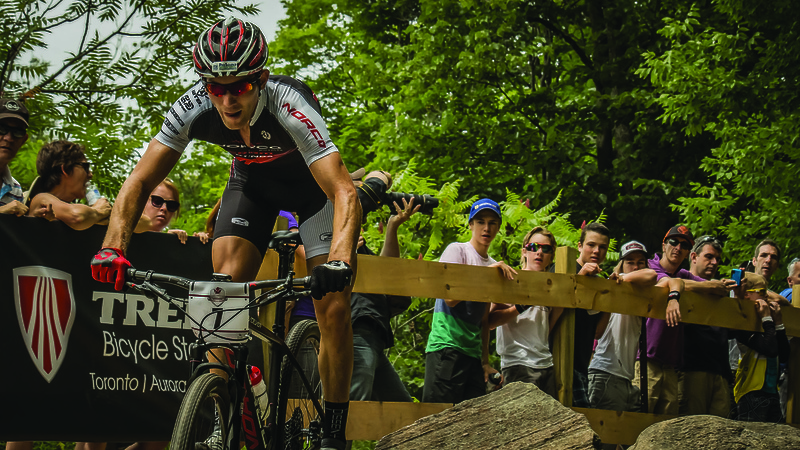 Our 2014 Canadian National Championships were held at Hardwood Hills in Ontario. After racing a Canada Cup the weekend before in Subury, ON the Norco Factory Team enjoyed a relaxing, yet focused, pre-race week at our accommodations in Horseshoe Valley. 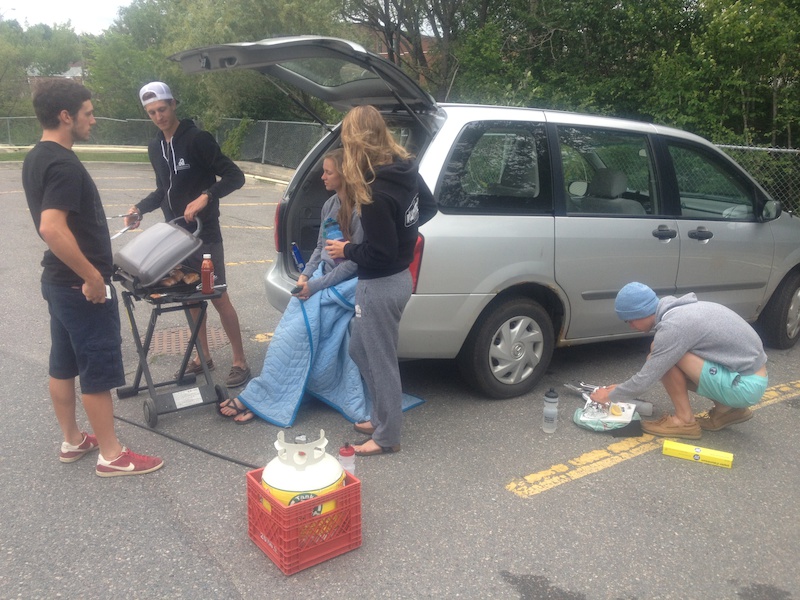 Nationals came and I had one of the best days racing a bike that I can remember. Finishing up 5th in senior elite men at the National Championships is hard to come by. Our crop of racers is fast and not just in Canada but around the globe. For example: Geoff Kabush is a 3X Olympian and World Cup winner, Max Plaxton also an Olympian is a multi-time national champ and world championship medallist, Derek Zandstra was reigning national champ and Raphael Gagne has had Canada’s best World Cup results this season. Back in 2009 I was fortunate enough to share the World Championship podium in the team relay with Geoff, Raphael and Catharine Pendrel. So yes, 5th against those guys is great, but the story behind the race is much more than a 5th on paper. 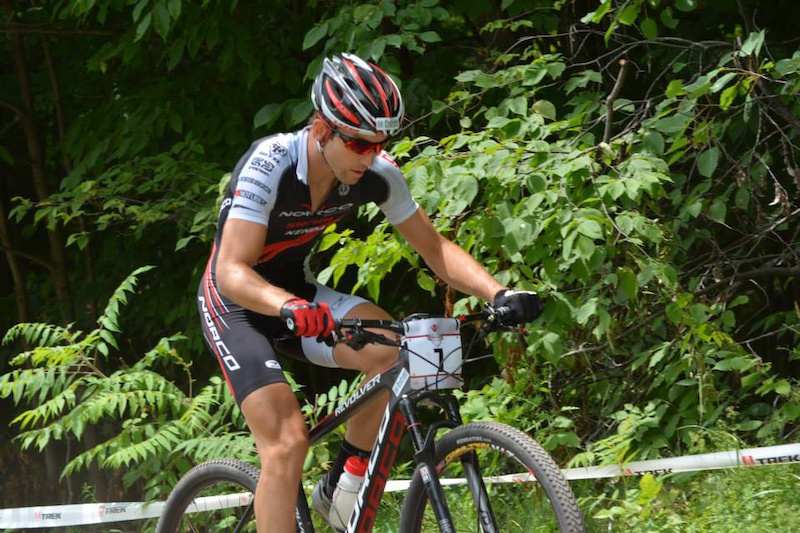 As a first year senior(23 years and older) I was VERY happy. I had written on a piece of paper back in December that a top-5 at Nationals was a goal for the season. That was a long time ago where lots of things have changed and happened. I'm happy to cross that off the list and take so much more from the race than the result. I've been working with a new coach for a couple months now, Keith Wilson, and we have put in the hardest training I've ever done. I've never felt so motivated, inspired, excited, strong, healthy and passionate for the sport as now.

During the race day battle I wasn't going to hang out, bide my time or follow wheels; I was going out guns blazing and not just pistols, but double barrel shotguns. I went all in from the start and raced unlike I've been for many years: at the front doing everything possible to dictate the race. 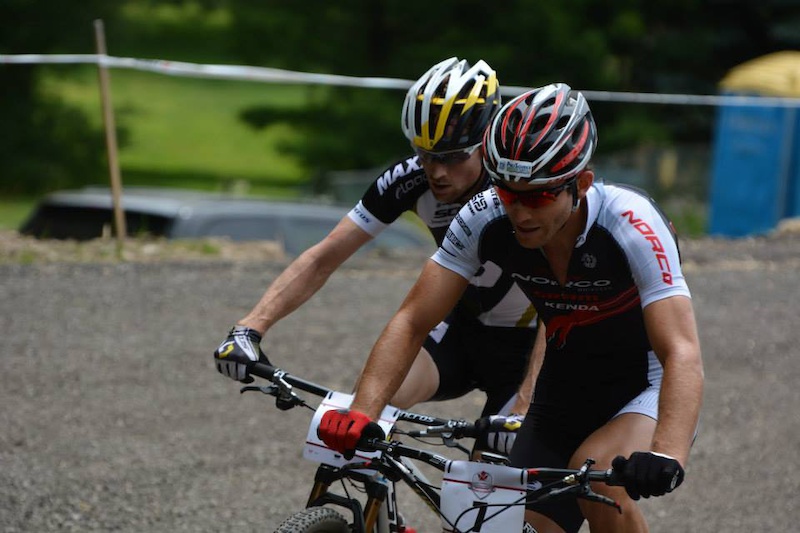 Lap 1 I took off and had a 10 sec lead before lap 2. Soon joined by Raphael Gagne of Rocky Mountain Factory Team and Cam Jette of Scott-3Rox Racing. For a couple laps we rode together, attacked each other, so staying close to the front was the only thing going through my head. On the 4th lap Cam had fallen off and it was down to Raph and I. We went blow for blow until I found some wiggle room on the big climb. That was it, the chance was there and I turned myself inside out to make the most of it.

By the end of the penultimate lap I was out front, solo, realizing that donning the Maple Leaf jersey was only a lap away. It was closer than I thought possible at this stage in my racing. In the end I was caught and passed by Geoff, Derek, Raph and Max. Never for a second did I lay off, although my body was fading, it was a special lap. Of course I would have loved to finish higher, especially on that podium, but everything was left on course and you can't be upset about that.

Without the support from everyone on course today I don't know if I would have been able to keep pushing that pace. I was proving to myself and everyone else that I'm not here to mess around. The crowds were amazing and all the cheering definitely made a difference in how I rode. So many kind words from many people out on course was very memorable, so I thank them and everyone else who supported me on that day and every other day leading up.

My Norco teammates had some stellar races as well. Haley Smith lead the charge in the U23 women and put down the ride of the race to come out second after a last lap mishap. Cayley Brooks followed up in 9th. For U23 men other Evan (Mcneely) and Peter Disera took the reigns for Norco. Peter, as a first year U23, took the bronze and Mcneely followed up in 6th after a tough race. My senior (old man) teammates Andrew Watson and Andrew Lesperance fought hard in a tough men's field to finish up 8th and 11th. You must be wondering by now if Norco requires a riders name to be Evan, Andrew, end with aley or Peter. Answer is no, we are just that awesome.

Up next are the Mont-Sainte-Anne and Windham World Cups. Check back for another report after those races. 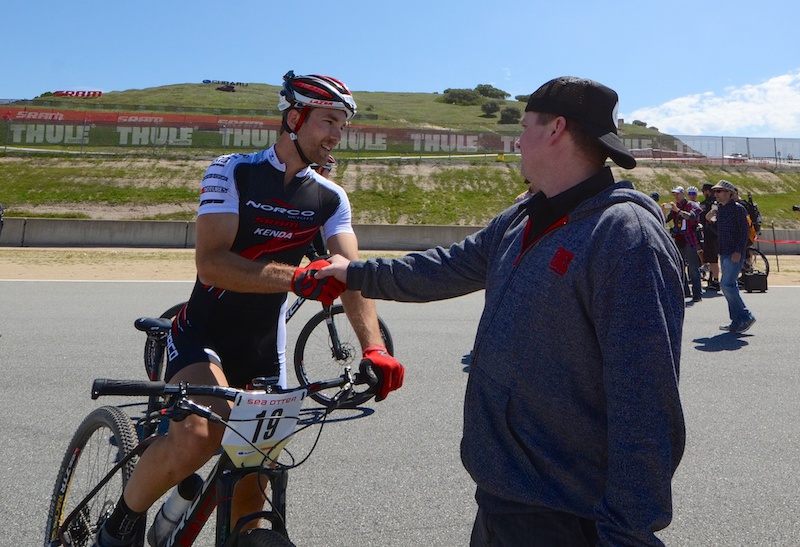 The man, the legend, the one and only Kevin Haviland. This guy is on the ground taking care of us XC athletes and I can't say enough about him. Putting up with six athletes during a specific race time is no easy task. Thank you 'Havy', Josh, Sean, Kyle and others for making the weekend easy for us athletes. 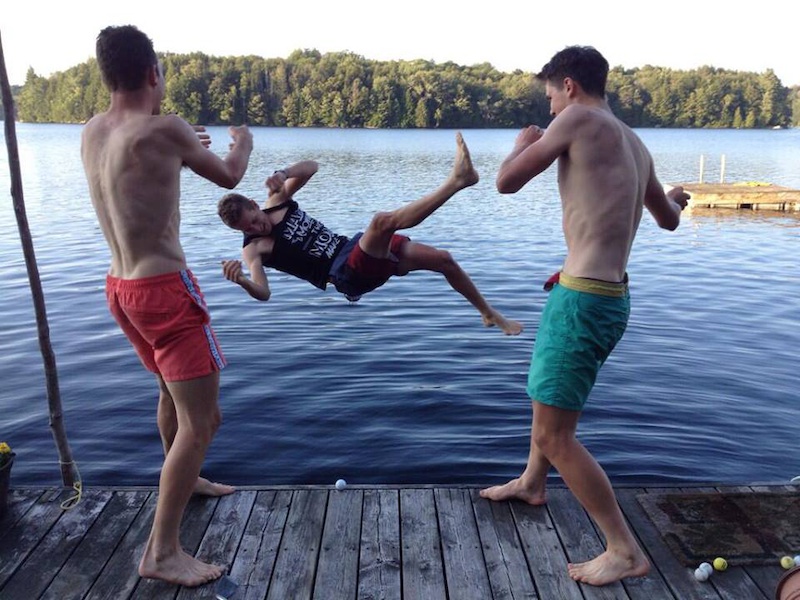 Just throwing this picture in.

thatshowiroll (Jul 22, 2014 at 12:38)
Good writeup. Hardwood hills is a great place to ride and race. Next year, the Pan Am Games are in Toronto, and the XC venue is at none other than Hardwood Hills.=-O

eveono (Jul 22, 2014 at 21:18)
He surprised us with a pit shirt that had a wolf howling at the moon and offered to wrestle, but we're still scared..
Below threshold threads are hidden

CaptainSnappy (Jul 23, 2014 at 10:51)
Support your country's racers regardless of the discipline.