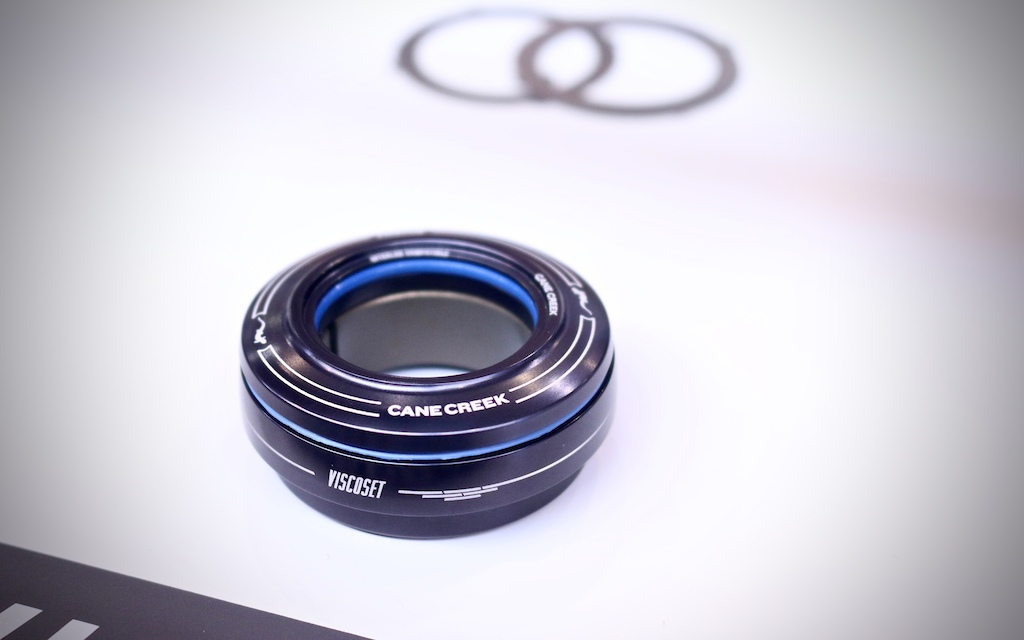 While we know them more for their Double Barrel shocks these days, Cane Creek has likely been making headsets since before you could ride a bike without training wheels. That was also around the same time that people were considering steering dampers for their mountain bike (remember Hopey? They're still at it, by the way), but steering dampers may be coming back around, albeit aimed at the e-bike and commuter market. The Viscoset is far too interesting to not show you guys, however, and I also wouldn't be surprised to see it show up on the odd downhill bike.

First, let's answer the why. Cane Creek had an e-bike manufacturer come to them with an issue: some of their bikes were steering very, very poorly, to the point where speed wobble was becoming an issue. The cause of the trouble? E-bikes, and especially commuter-style e-bikes, often have their heavy battery located towards the rear of the bike which, along with the rider's position, puts a massive weight imbalance towards the rear axle. Further compounding matters is how many city-styled e-bikes have only a long down tube connecting the front of the bike to the back, which isn't exactly the most torsionally rigid design.
Viscoset Details

The result of the relatively flexible frame and odd weight imbalance can sometimes be a speed wobble, which is a scary thing to someone who's only using their bike to get to work or pick up groceries. So Cane Creek needed to come up with a headset that did the job of a steering damper but still looked like a headset, and that would be both dead simple and reliable. Enter the Viscoset, a headset that's also a steering damper. 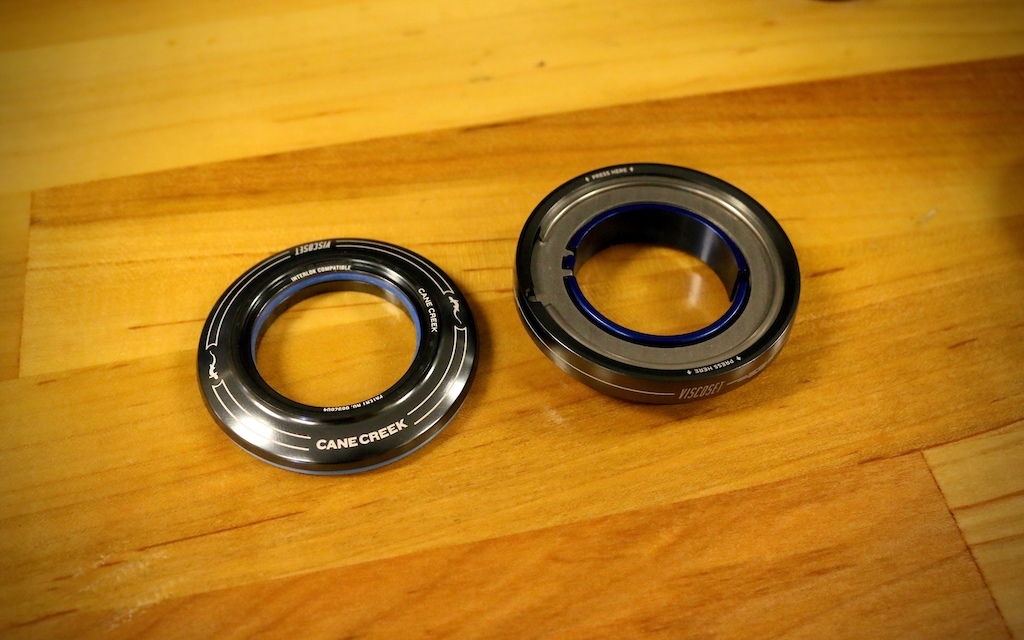 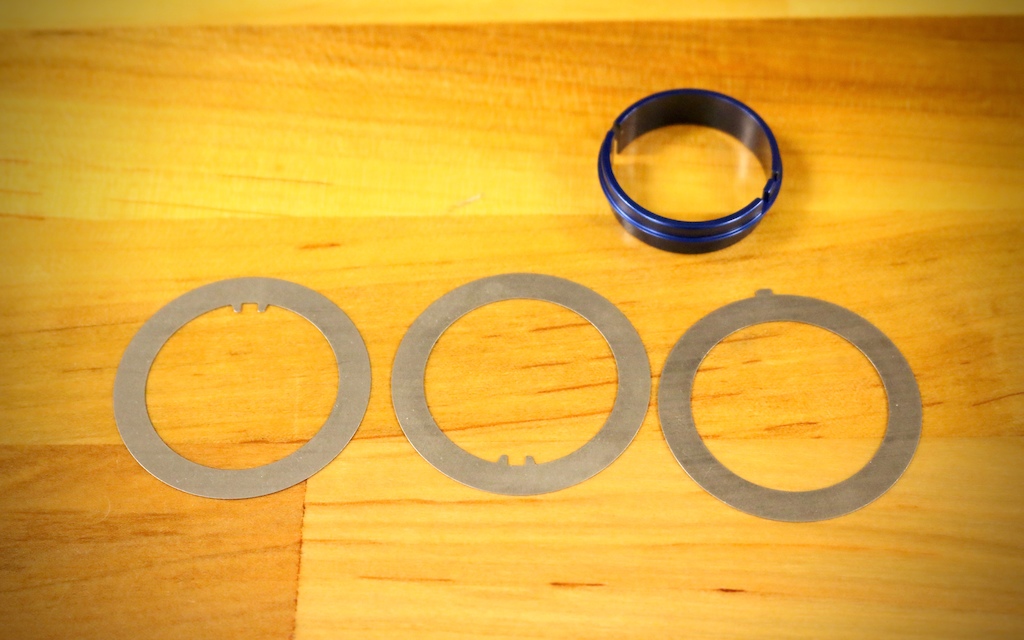 
The Viscoset still needs to do the job of a headset, so you'll still find a standard looking headset cup but also one that's a few millimeters taller than normal. This is because there's a sealed bearing in the cup as per usual, but above it is stacked a number of thin clutch plates. Half of these plates are keyed to lock into the cup to keep them from rotating, while the other half are keyed into the compression ring so as to turn only with the steerer tube.

The clutch plates are also stacked up alternately; the headset cup is obviously stationary in the frame because it's pressed into place, and the compression ring clamps down onto the steerer tube when you preload your headset.

You can see the keyed clutch plates and how half of them lock into the compression ring.


Cane Creek then fills the gaps in between the clutch plates with a very special damping grease that provides resistance but in a smooth way. You know the 'oh shit' handles in your car and how if you let them go they'll fold back up slowly? Or how the dials on a decent stereo turn smoothly but they're not loose? That's damping grease at work, and with the alternating plates stacked up next to each other with this damping grease in between them, the Viscoset provides a similar feel to an 'oh shit' handle or stereo dial - it turns smoothly, but there's certainly some resistance there.

The amount of damping can be changed by using different viscosity grease, or even by fitting slightly different clutch plate layups, but the Viscoset isn't like a speed-sensitive fluid-style steering damper like you'd find on some motorbikes, so there's more resistance and it's applied in both directions. The design does provide a relatively low stack height considering what it does, but it's still a few millimeters taller than a normal headset, and it will obviously only work on bikes that take press-in headset cups.

HamsterPants (Aug 31, 2016 at 13:33)
Hey, just because it has a motor, it's faster than Chris Froome on crack, and pedaling provides such a small percentage of the power that the pedals are almost irrelevant, and it has more suspension than my motorcycle, and it has a steering damper, and it's powered by fossil fuel (indirectly, power plants don't run on positive vibes), DOES NOT MEAN IT'S NOT A BICYCLE!

apparantely you are wrong about the Froome part.

Marcencinitas (Aug 31, 2016 at 14:55) (Below Threshold)
Most of the older guys on this forum thought suspension and disk brakes were for pussies when they first came out but once we experienced the benefits, we came around. Same thing will happen with eBikes. Most of us will be riding them to work and to the grocery store within five years.

derekfloyd (Aug 31, 2016 at 17:51)
@schofell84: that being said, I think the rider has a lot to do with speed wobbles. A more experienced and relaxed rider will have less wobbles. Maybe it's the people and not the bikes. The bikes are too much for inexperienced riders

wilko1987 (Sep 1, 2016 at 7:05)
@kathwill: I have used a brace before, but found it kept pulling my ribs away from cartlidge.I have a complete Brachial Plexus injury, so a bit more complex than loss of limb as my pec and other muscles are paralysed too. I recently competed in Deep Summer Photo Challenge in Whistler , and to be fair to the Hopey it did all I could ask from it in the bike park. They just get in the way a bit - this looks clean and more hassle free.

Partigiano (Aug 31, 2016 at 13:22)
Euro Bike news are nice, but I am waiting for trackwalk coverage and Claudio's run with SuperBruni in front of him...

fattyheadshok (Aug 31, 2016 at 14:42)
Ok so..... We finally get an article about a specialty headset that has to legitimately admit that.... "Wait for it" .... E bikes are heavy unbalanced pieces of crap. Proven by the very necessity of the need for a dampened headset.

kingofkonas (Aug 31, 2016 at 13:35)
We will soon see slopestyle pro's installing these on training bikes to increase their barspin speed!

kingofkonas (Aug 31, 2016 at 18:41)
@NickBosshard: Keyword "training bike" like a barspin resistance trainer. Still a joke though.

pukkasilvia (Aug 31, 2016 at 13:30)
i actually got 'tank slap' on my dh bike at cwmcarn on a hip step down the other week. first time ive ever had it on a push bike. It was quite a crazy experience. managed to keep it going luckily

MtbSince84 (Aug 31, 2016 at 23:31)
Cool - my riding buds and I were just talking the other day about having a steering damper on MTBs (after having them on motos and finding them a big help).

I just hope this Viscoset is more reliable than the two AngleSets I had that self destructed after a few rides. :-/

DaMilkyBarKid (Aug 31, 2016 at 22:50)
Can't help but think that if any grit or salt gets in between those plates (entirely possible on a British commute!) it'll just grind itself to death very quickly. I've experienced steering wobble on a road bike at ~50mph and it is scary but surely E-bikes should be capable of handling 16mph - their legal top speed here in the UK - without the frame flexing like a plasticine ruler!!

mrleach (Sep 1, 2016 at 5:35)
@DaMilkyBarKid: Have you ever used a Cane Creek headset? Their seal design is quite excellent. I rode an entire day in hurricane force rain and winds at a DH park last year (not the best idea, I admit, but we had been planning the trip for months, and it was their last open day of the season) Followed that up with an entire night out in the rain, and a 3 hour drive home in the rain with the bike on the rack. I had to scrap just about every bearing on the bike, as well as the chain. The Cane Creek Forty was still flawless.

DaMilkyBarKid (Sep 1, 2016 at 9:56)
@mrleach: yep, used a few C/Creek headsets. Plus a RaceFace and multiple Hopes, all have eventually ended up with dirt inside them. Hope are the best, just need a clean every few weeks to keep them sweet.
We have that kind of weather for most of the year so anything with moving parts gets chewed up pretty fast. I've ridden on some days and gone through multiple brake pads, the chainring, the chain and had to regrease every bearing when I got home!! But then it was a Specialized bike with piss-poor sealing so it was to be expected TBH.
If we decided not to go out riding because the weather was crap no-one would ride in the UK!!

Messy (Aug 31, 2016 at 20:47)
so, when my headset bearings give up and I can't turn the bars easily, is that a good thing? I can see the point for super bikes or whatever, but I've never experienced head shake on a pushbike.

I WOULD like to see a headset that retro-fits a steering lock (like some Trek models have now) onto older headsets.

marcsb95c (Sep 1, 2016 at 9:36)
Will it be really unreliable and after repair it still doesn't work, will they then try and make you spend another $200 for a bigger heavier version? Because they did that to me with the DoucheBagInline. Thing kept crapping the bed so they offered to SELL me another one of their shocks for another $200 so that I could have a lighter wallet and heavier bike.

unrooted (Aug 31, 2016 at 13:53)
Doesn't a steering damper reduce the effects of a quick bump, but allows for normal steering gel otherwise. Wouldn't this do the opposite...

iamamodel (Aug 31, 2016 at 20:27)
The handles on the ceilings/head liner of cars just above the doors - when your passengers are scared by the driver's talent (or lack of it), they grab them and yell "Oh shiii..."

These are spring loaded to keep them folded away and are often damped on their return.