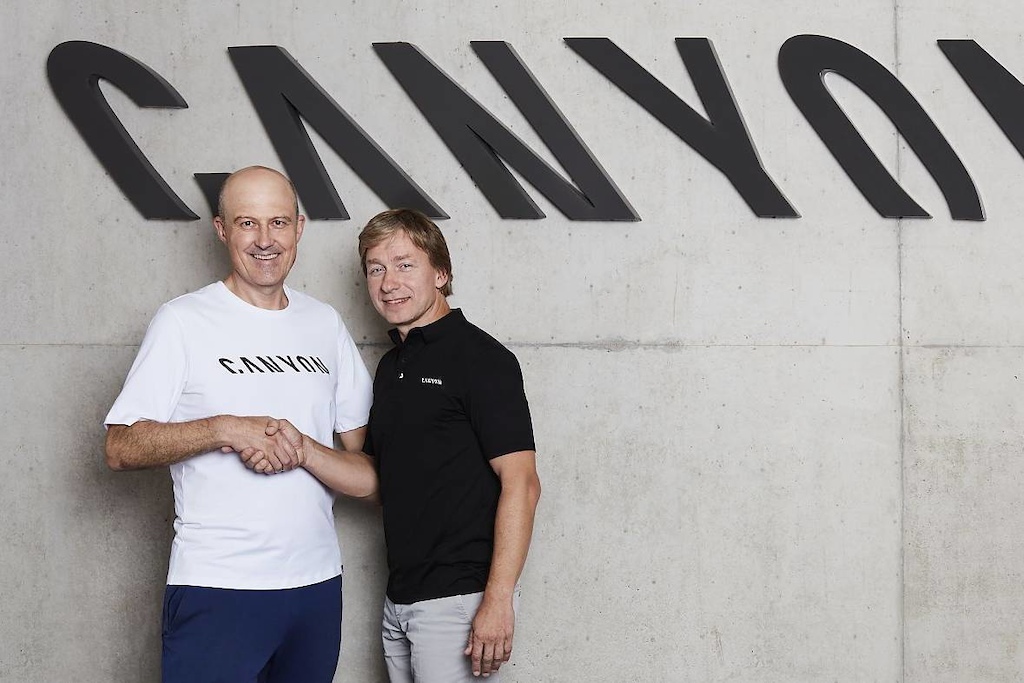 One of Canyon's founders and its CEO for the past 35 years, Roman Arnold, has stepped away from his role to join the newly formed Canyon Advisory Board as chairman.

Canyon began life as Radsport Arnold in 1985, it was formed by Roman and his brother Frank as a bike parts supplier. In 1996, the Canyon name emerged and the brand embraced a direct sales model, becoming one of the first in cycling to cut out bike shops and sell directly to customers.

Roman has been at the head of the brand since then but will now be stepping aside to support management and help set the company's strategic course. He said, "I am still with Canyon with all my heart and soul, but in a new position in the future. I have been riding the big chainring for over 30 years. I am now shifting down a gear, but I am doing well on the long distance." He will be replaced on October 1 by Armin Landgraf, the current COO and former CEO of Pon Group, the parent company of Focus, Santa Cruz and more.

Landgraf said, "We will continue to focus on the development of new technologies and products, a continuous expansion of our e-bike portfolio, the expansion of our service offering and the strengthening of our global brand presence."

Canyon also announced its sales have increased by 30% up to €400 million ($474 million) in its fiscal year. It also announced that it is looking for a new investor after working with TSG Consumer Partners LLC for the past five years. Its sales have grown by €150 million in that time thanks in part to its entry into the American market. Arnold said, "We have reached a scale at which we need additional investors for our growth and innovation plans."

vjunior21 (Sep 17, 2020 at 8:32)
All I need to hear out of Canyon is that Pauline and Fabio are still sponsored athletes. Everything else is just noise.

The-Foiling-Optimist (Sep 17, 2020 at 17:51)
@subwaypanda: Definitely would be interesting to know how much they save each year by systematically cutting all the vowels out of their operations.

subwaypanda (Sep 17, 2020 at 21:31)
@The-Foiling-Optimist: if they labelled everything in German they would be saving a fortune.

DidNotSendIt (Sep 18, 2020 at 6:04)
@The-Foiling-Optimist: Don't know the figures but i understand it brings in a consonant stream of revenue.

Will-narayan (Sep 17, 2020 at 5:34)
Isn't a bit weird to have someone from another company take the CEO role ? Why not someone from the company stepping up ? (naive question, not targeting Canyon, I don't know anything business wise)

Also @Pinkbike, a big article showing all the ties in the bike industry, parent company, factories, etc, would be cool

DHhack (Sep 17, 2020 at 6:04)
First, no it’s not. Second, the new CEO is the current COO. Probably recruited for the role but wanted him in a lesser role first to make sure he jives with the company.

Will-narayan (Sep 17, 2020 at 10:18)
@DHhack: Oh indeed, I misread. Cuz' in fact I've heard that in Germany it's a common thing to start in a company at the bottom and end up being the CEO a couple of decades later. Screwing everything up with someone totally stranger to the company is more a french thing^^.

swellhunter (Sep 17, 2020 at 4:37)
My experience with Canyon has been all good. For a budget based rider you can get a Spectral or Torque AL 6.0 build and just upgrade the brakes and you have a full send machine all day. Still waiting to find something loose on my Spectral after a day at the park.

mtmc99 (Sep 18, 2020 at 7:55)
In my experience my the lower pivot bolts always came loose for me on my Spectral (the ones behind the dust cover and chainring). I would Loctite them and they would still work loose. They were the only bolts that were inconvenient to tighten and the only ones I had issue with. This seemed to be a one off issue because I never heard of someone else with the issue.

ScottyJ7 (Sep 17, 2020 at 6:53)
They need some work on their warranty department. I have a friend who has countless times tried to get his cracked frame replaced and they have gone dark on him. Overall great bikes for the builds.

Drewbreezy (Sep 17, 2020 at 16:36)
Honestly, they make a good bike and are as innovative as others. It’s too bad the direct to consumer model has people poo pooing them. The price points are too hard to ignore, in a positive way. They’ve made a name for themselves with their road bikes, check their super light ultimate it’s a thing a beauty even for a full susp rider like me. I appreciate their work and innovation as it makes other major companies continue to keep up and push the limits. Congrats and amazing work to the former and to the next, continue the progress and push the boundaries further. Also keep braydon, that dude can ride. Cheers

James Smurthwaite, You forgot to properly introduce this person Roman you reported on; or maybe you get Google Points.

If I had to guess,(the one Who Looks like John Denver)

stalkinghorse (Sep 17, 2020 at 7:56)
Interesting to see the bike spike in sales. I hope that trickles down to their sponsored riders (not just at Canyon, but at every company with record sales).

lkubica (Sep 17, 2020 at 3:03)
I still wonder what is the story behind the brand's name. I mean, were they originally producing kayaks and got a quick opportunity to sale some Chinese bikes or what?

mtbmaniatv (Sep 17, 2020 at 4:13)
CEO's shouldnt be on the board anyway. Otherwise, they can't really vote in a new CEO from my understanding.

heinous (Sep 17, 2020 at 4:34)
Depends on the constitution but it’s irregular for a CEO to have casting voting right on a board. You’ll find CEO and Board isn’t uncommon where the CEO is founder and major shareholder.

PapaStone (Sep 17, 2020 at 3:56)
I don't like the focus on their e-bike portfolio. They need to spend more time developing their human powered bikes for racers.

Euskafreez (Sep 17, 2020 at 4:54)
Open your eyes, Canyon is a German company based in Europe. And since they sell most of their bikes in Europe, focusing on e-bikes is the right thing to do. 40 to 50% of the profit for high end push bikes are made with e-bikes. If it was not for ebikes, a lot of LBS would close their doors.
What Canyon need to do is focusing the type of bikes they sell the most. Race oriented bikes … only a drop in the ocean.

DuelingBanjos (Sep 17, 2020 at 4:05)
That photo doesn't need covid reference in order to be qualified as awkward.