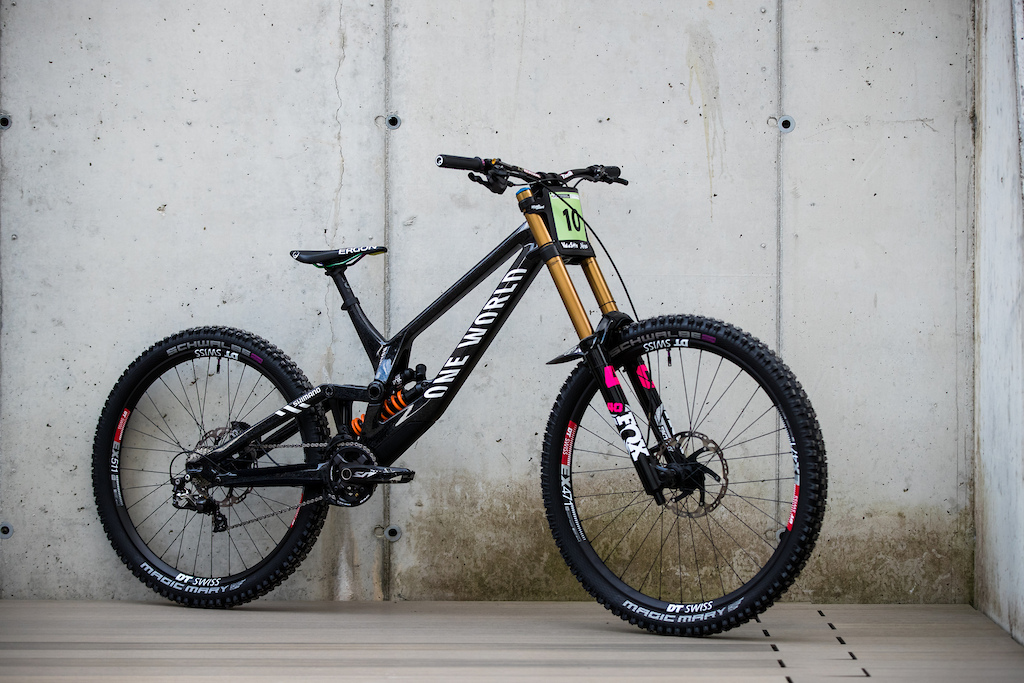 Phoebe Gale's Sender. Credit: Boris Beyer.
Rather than provide its athletes with custom, national colours paint jobs at the upcoming World Championships or Audi Nines, Canyon has instead designed blacked-out frames that raise awareness and money for World Bicycle Relief.

The bikes will have the phrase "One World" painted on the downtube to signify that, "we’re all here on this planet together, and we’re all part of the same awesome global cycling community. Especially in our modern world, unity and solidarity are more important than ever." 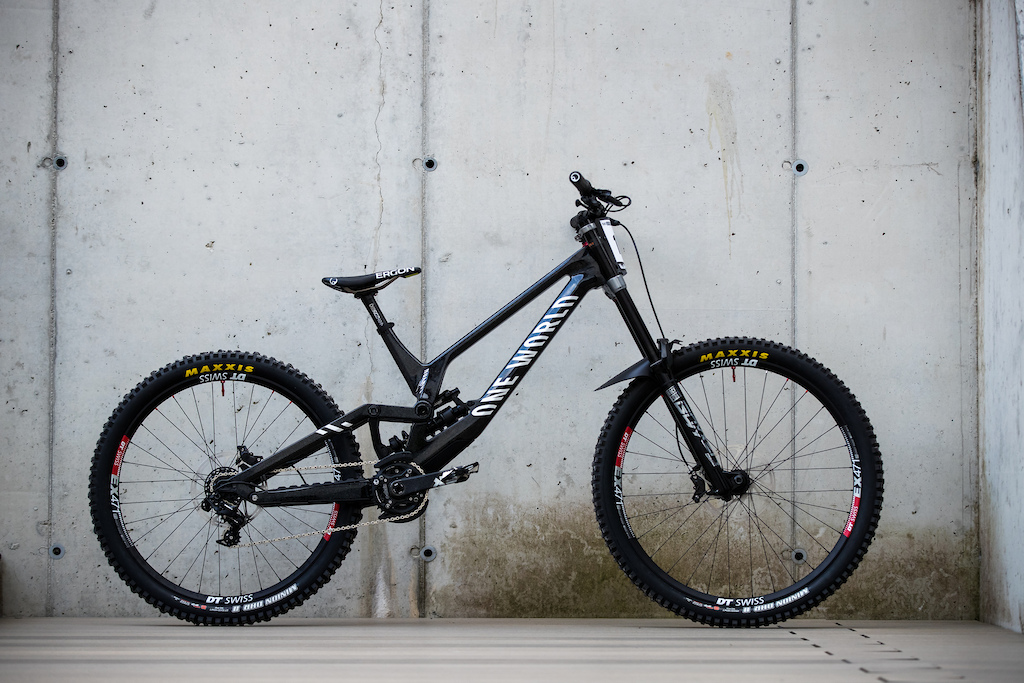 Both Canyon downhill teams will run the World Bicycle Relief frames. Credit: Boris Beyer.
World Bicycle Relief is a charity that uses bikes to reduce poverty around the world. The bicycles they donate remove barriers to attending school, receiving healthcare, and delivering goods to market. The charity has so far delivered 572,000 bikes and impacted more than 3.4 million people. 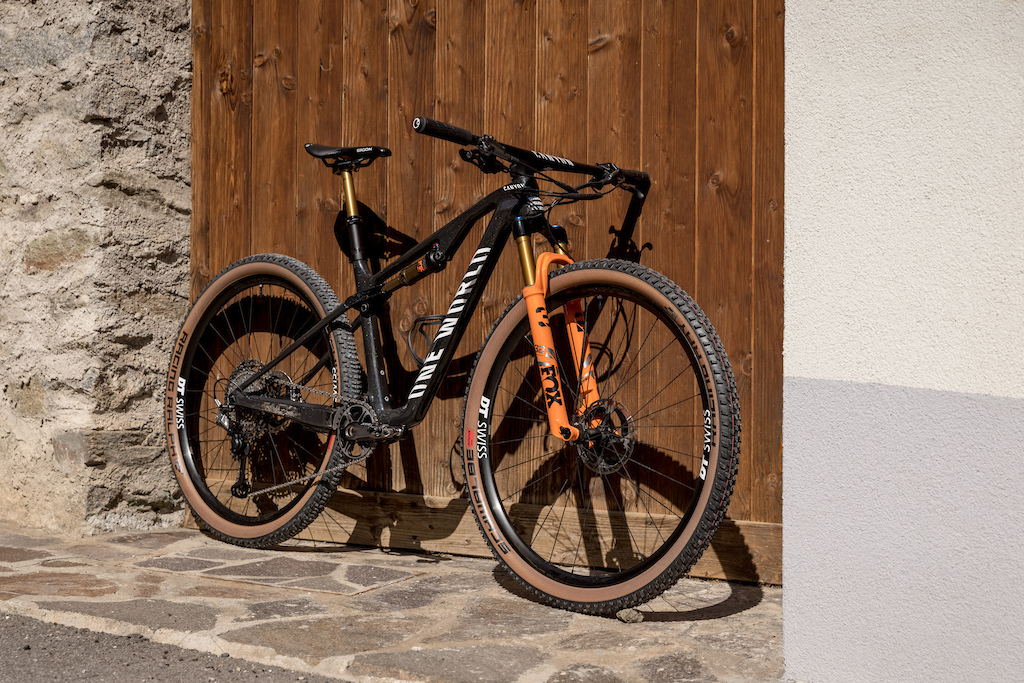 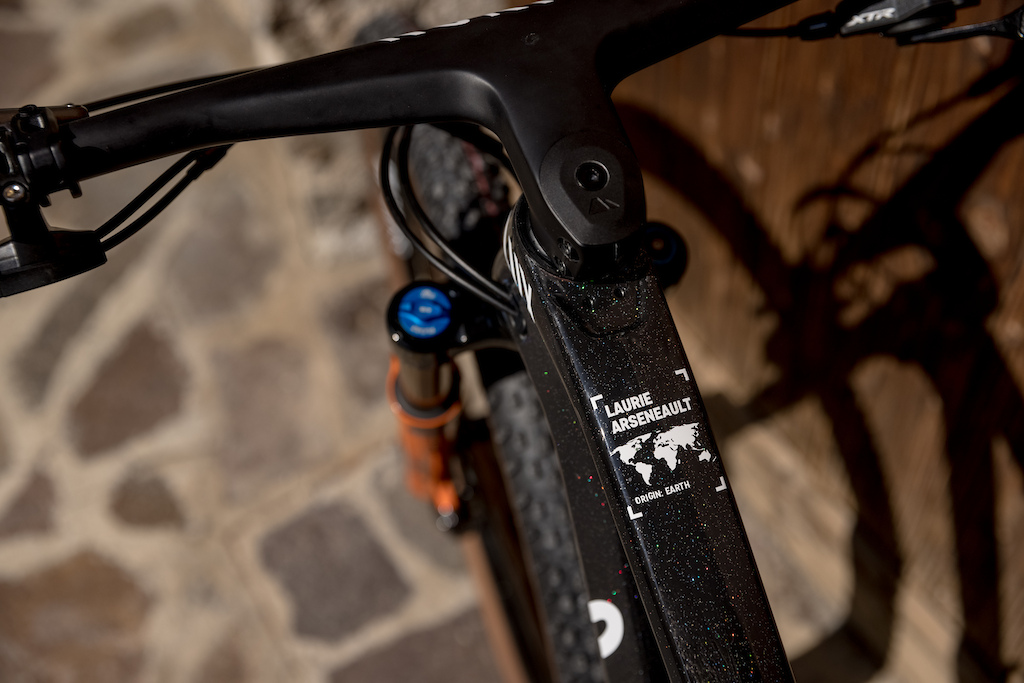 Canyon is also asking fans to make a donation on a fundraising page to support its message. Every donation made will include an entry to win a one-of-a-kind Canyon Spectral CF 29 with the same One World artwork as the pros' bikes. 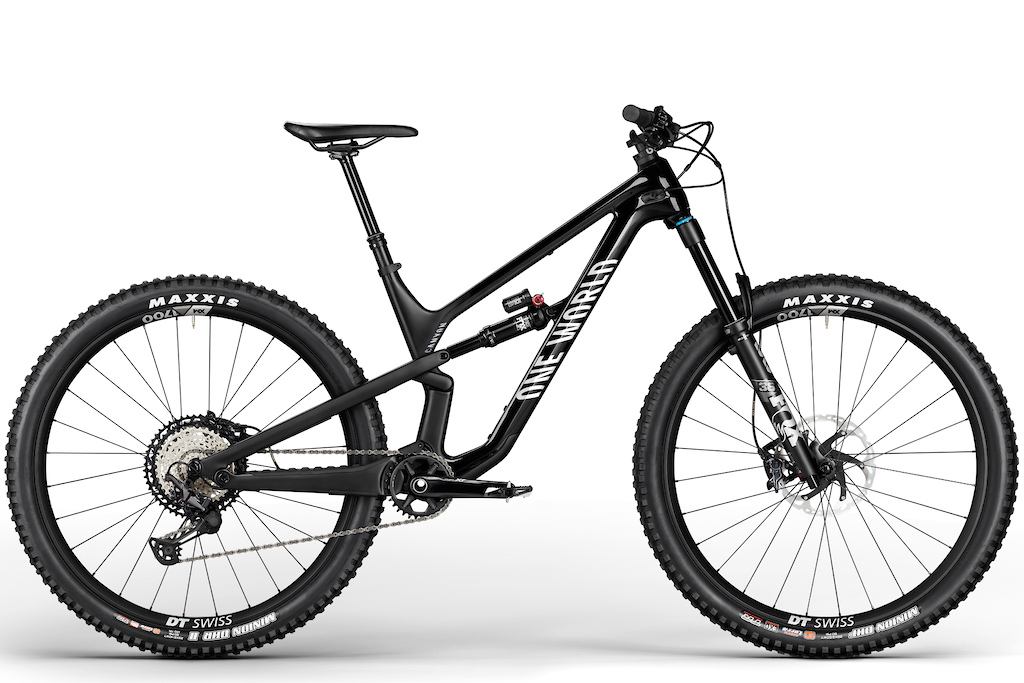 More information on the project and donating can be found, here or check out the phenomenal work being done by World Bicycle Relief here.

padirt (Aug 25, 2021 at 3:35)
Again in summary a large cash injected bike company shows their caring nature by making a few special bikes for their pros and asks you to donate?

bulletbassman (Aug 25, 2021 at 5:19)
So they shouldn’t donate the bikes and bring publicity to the charity because you are salty?

bulletbassman (Aug 25, 2021 at 5:22)
Oops misread article, while I’m sure canyon is also donating money, would be cool if bikes were being donated like neko did with yt.

If all they’re donating is a bike prize then that’s insane. The Buffalo Bikes seem to cost about £140 each. The saved cost on frame-sprays should mean they can donate 5 or 10 Buffalo Bikes per athlete. That would be something tangible. As it is it looks more like virtue-signalling than virtue.

twopoint6khz (Aug 25, 2021 at 3:25)
"Rather than provide its athletes with custom, national colours paint jobs at the upcoming World Championships or Audi Nines, Canyon has instead designed blacked-out frames that raise awareness and money for World Bicycle Relief"

Except of course, that black and white are the national colours of Cornwall.

padirt (Aug 25, 2021 at 3:32)
If canyon cared enough they would just donate a bunch of money but they really want to market their product and show us how awesome they are as a caring company instead so they do this. Bike companies have made so much money in the past two years that there is no excuse for not just coughing up some bikes or money for the less fortunate. You may be able to dangle carrots and get away with it anywhere else but this is the mtb community. We are proud of what little brains we have left.

vinay (Aug 25, 2021 at 3:40)
I think it is cool. They spread the message on their bikes (that most likely are going to be photographed, filmed etc). So it shows the message instead of their brand name. And they tell us audience that it is better to spend our money on a good cause instead of on their bikes (while we already have a perfectly fine one). I approve!

padirt (Aug 25, 2021 at 4:27)
@Germanmike: I donate my time and money to local causes and I don’t ask for praise or anyone else to do anything. I quietly serve my community. I do not advertise any of what I do I just do it as it’s not about me it’s about the cause.

bigtim (Aug 25, 2021 at 4:38)
@padirt: It's not *all* about the money though. Boosting awareness of these organisations is a huge part of what they need, because that is what ultimately will lead to a wider reaching audience with hopefully a more steady income rather than one off donations which largely go unreported. Charities building relationships with organisations willing to support them like this is a massive benefit. The very fact we are having this conversation shows that awareness is being raised by this initiative.

m1dg3t (Aug 25, 2021 at 4:52)
@bigtim: It is a well established/known fact that the majority of $$$ that charities receive does NOT make it's way to the intended use. The larger the charity the less likely your donation is to get used for what you intended.

person-named-john (Aug 25, 2021 at 5:16)
@m1dg3t: their point is that the supply shortage is going to continue because factories in China and elsewhere are going to continue to be affected by covid-induced limitations, and possibly get worse. Because of this, bike brands may continue to raise prices. Most already did once, it wouldn't really surprise me if they did again at some point. Even if brands are selling more than they have in the past, the demand far surpasses the supply.

GZMS (Aug 25, 2021 at 5:59)
@m1dg3t: inflation and profits/losses have no direct connection and can go either way independently.. #UseAnEconomicsTextbook

DavidMcComb (Aug 25, 2021 at 10:07)
Am I missing something here? Donate to a charity for a chance to win a free bike, while helping others out. how is this any different from all these large companies selling merch for entries to a free car/truck/camper... except now you help others instead of getting your $12 t-shirt that you'll spill mustard on at the family BBQ next week and use as a rag. Obviously Canyon will donate a large sum themselves but if they can incentivize others to donate as well....everyone wins.

yellowtree (Aug 25, 2021 at 3:43)
"To enter the draw for free without pledging, please send a postcard with your name, address and contact telephone number to: Canyon Bicycles UK Ltd, Unit 72 Barwell Business Park, Chessington, KT9 2NY."
Strange that this is part of the Terms and conditions

JackNy (Aug 25, 2021 at 3:48)
Prize draws and fundraisers do have some weird t's and c's, so they are not mistaken for gambling or lottery comps.

pourquois-pas (Aug 25, 2021 at 6:17)
@JackNy: This. In many parts of the world you cannot require any purchase or any consideration in order to enter a contest. So to get around these rules there is always a non-purchase entry method.

Here in Canada the infamous Tim Horton's runs a promo for shit prizes (but not as shit as their actual coffee). Since no purchase is necessary you used to be able to just walk in and ask for a cup. Most stores knew that to enter without cost one must mail the head office and they will ship you a flat unused cup. But if you're charming and a quick talker they'd just give up and pass over a cup to move on with their day in stead of arguing whether requiring one ot buy a postage stamp falls under "consideration". Now the contest has gone virtual so the jig is up, but it was fun for years.

nickgarrison (Aug 25, 2021 at 4:56)
I don't get why people knock companies or famous and/or wealthy people for bringing awareness to some sort of charity. I don't see how that is a negative thing. I bet in some cases when things like this get the attention of a broad audience, it generates more donations than just if the company or person donated and never said a word about it. I know if I ran a charity, I would be stoked to see my organization get promoted to a very large audience.

Nygaard (Aug 25, 2021 at 6:28)
Now throw some of that black paint on the top spec LUX Trail, please! I really really want one - but at the same time don't want to look like someone who just escaped from a circus!

zyoungson (Aug 25, 2021 at 5:32)
Pretty rich for a large company to signal a good cause and ask for people to donate without actually donating themselves.

meathooker (Aug 25, 2021 at 6:02)
All of these companies need to start donating to provide birth control. Virtually all of the problems society faces could be solved in a couple decades with proper distribution and use of birth control.