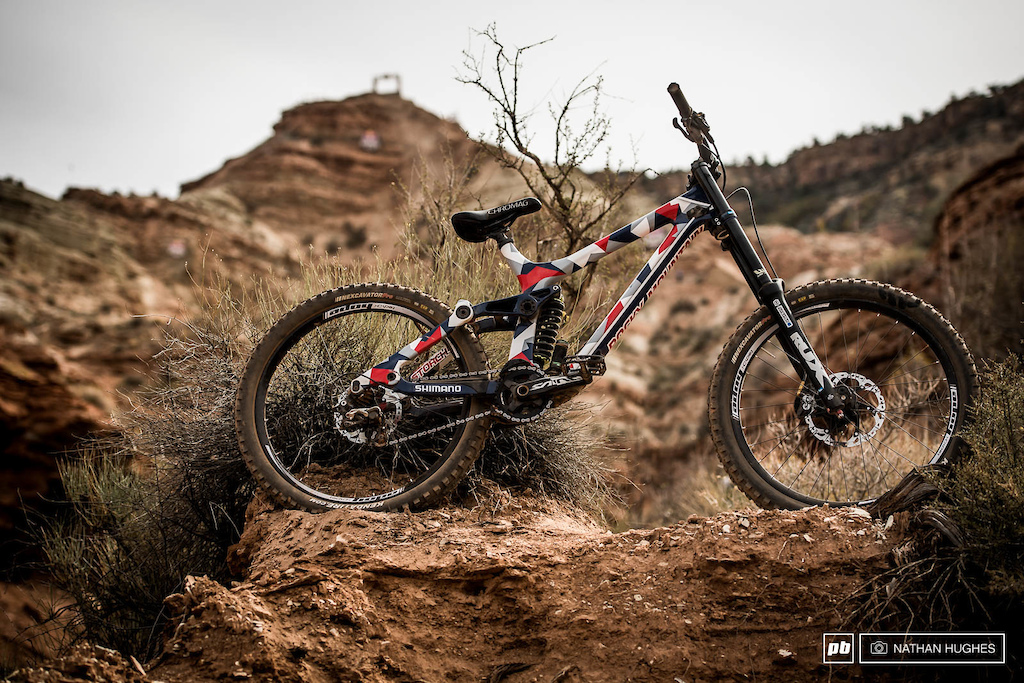 BIKE CHECK
Carson Storch's
Rocky Mountain Maiden
At 23-years-old, Carson Storch is one of the youngest competitors at the Red Bull Rampage, despite the fact that this is his third time competing in the event. Last year's performance was cut short by a crash in practice - there's no doubt Carson will be looking for redemption this time around.

His weapon of choice for the near-vertical course is a Rocky Mountain Maiden, complete with a one of a kind paintjob from Painthouse Customs. The red, white, and blue pattern was inspired by the camouflage used by the US Navy during WWII. 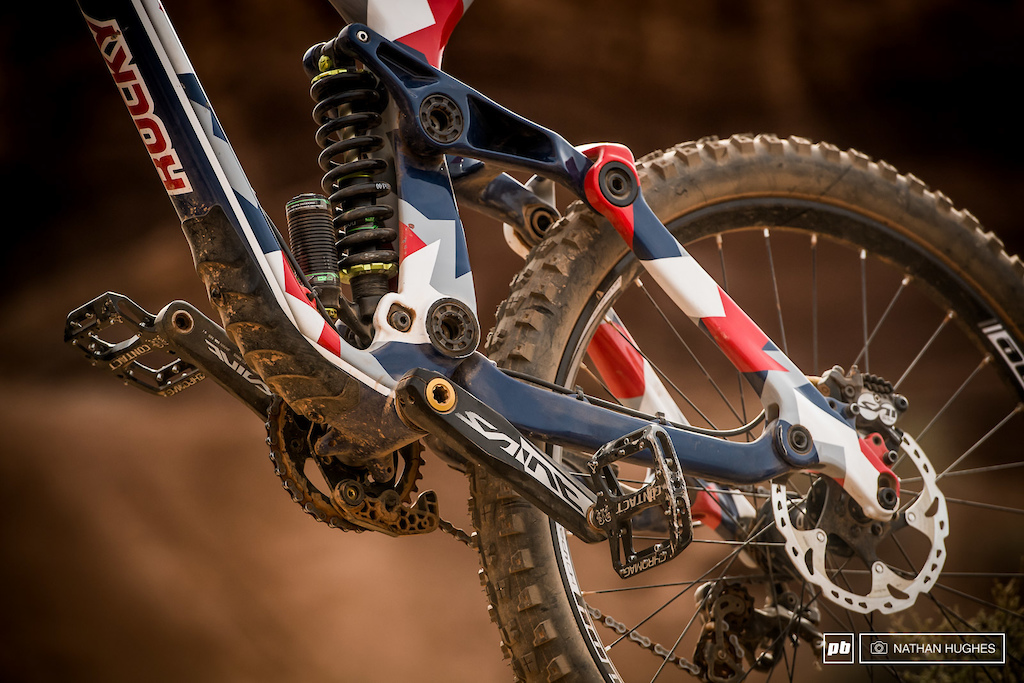 The Maiden's fork and shock have been tuned to be extra stiff and progressive in order to withstand the massive drops and jumps that are on the menu.
Rocky designed the Maiden to be able to run 26” or 27.5” wheels while maintaining the same geometry thanks to a custom lower headset cup and two rear axle positions. Storch has chosen to go with 26” wheels, in this case a set of Hope wheels shod with Kenda Nexcavators, due to the fact that he's on the shorter side of the scale, and prefers the extra maneuverability the smaller wheels provide.

The go-to suspension setup for the huge hucks of Rampage is extra stiff and progressive, and Storch's setup is no exception. Both the Suntour RUX fork and the DVO Jade shock have been custom tuned to be able to handle the forces generated while coming in for a landing off a two-story drop.

Carson says he prefers the feel of an aluminum handlebar versus carbon for hard landings, and in this case has gone with Chromag's OSX 35 trimmed down to 787mm and rolled forward slightly to put his weight in the right position for the tricks he has in store for Friday's big show. 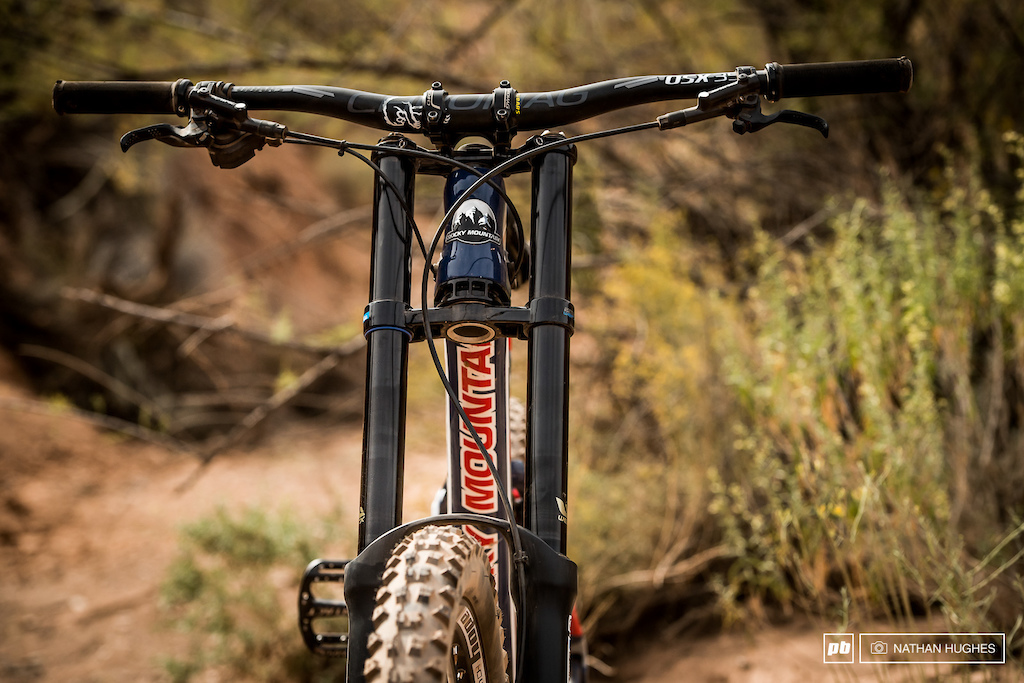 The lower headset cup adjusts the bike's geometry to work with 26" wheels. 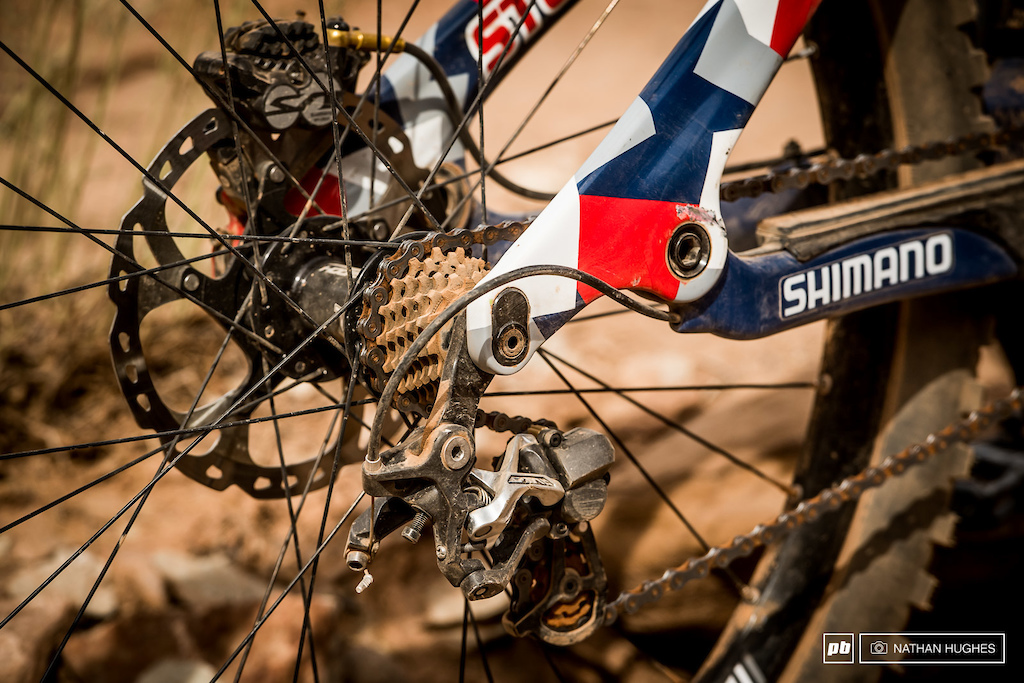 There's not much pedaling required, which is why Storch is only running a few cogs on his Shimano cassette. 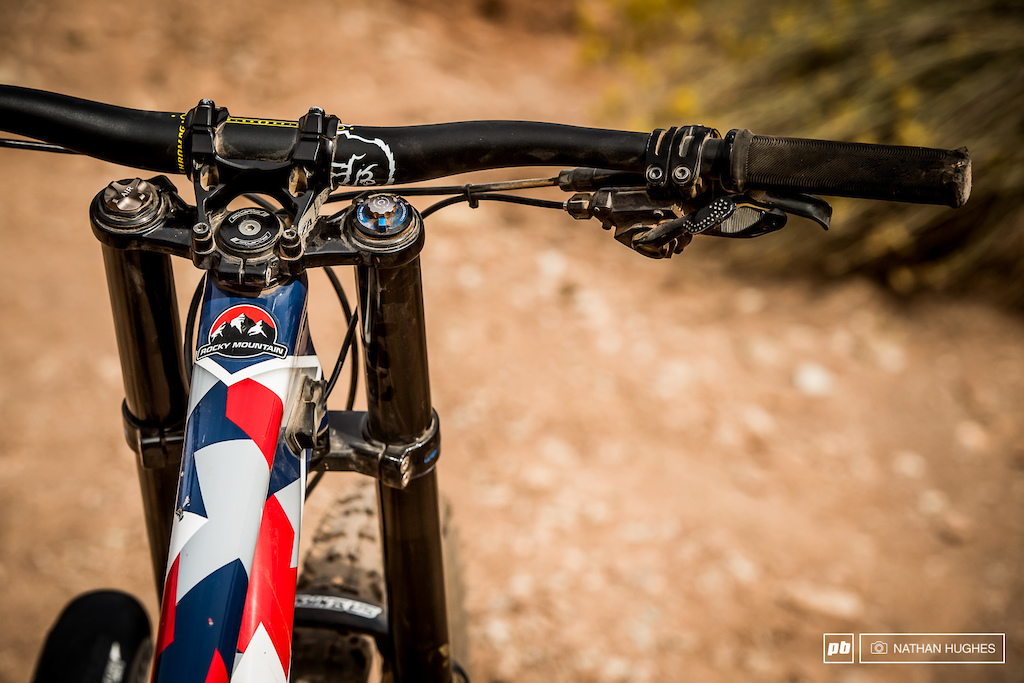 Chromag takes care of the handlebar, and Shimano provides the stoppers and shifter. 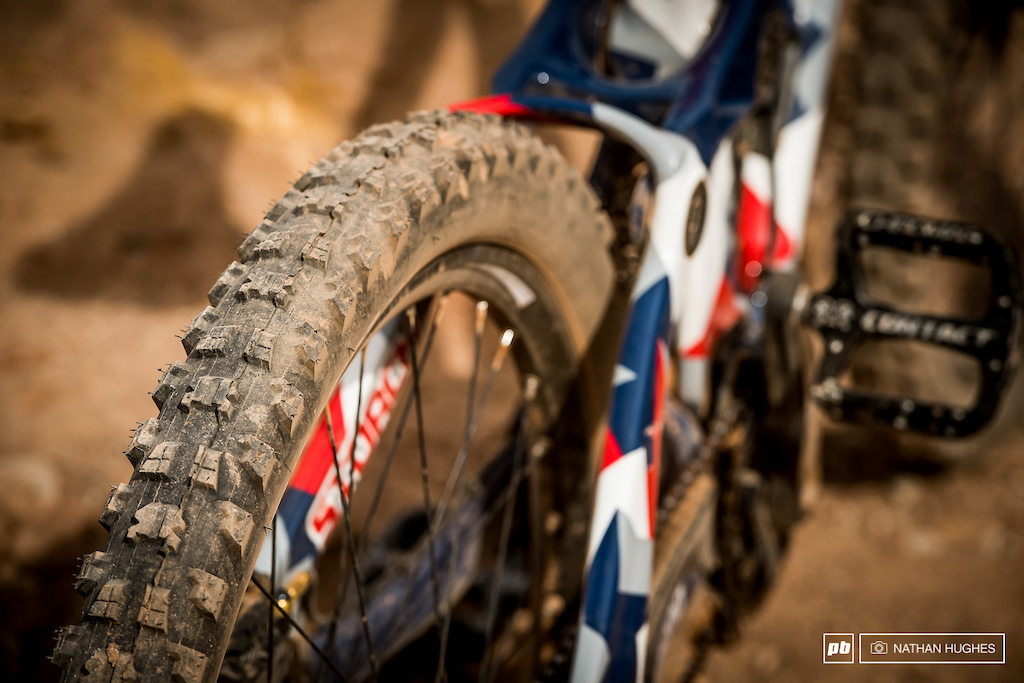 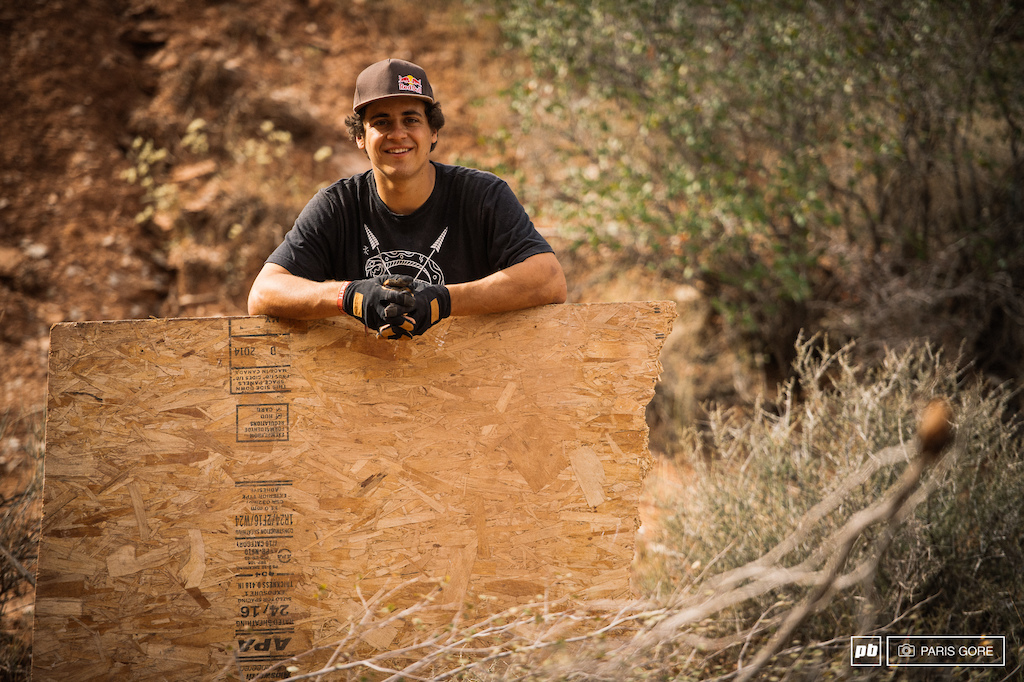 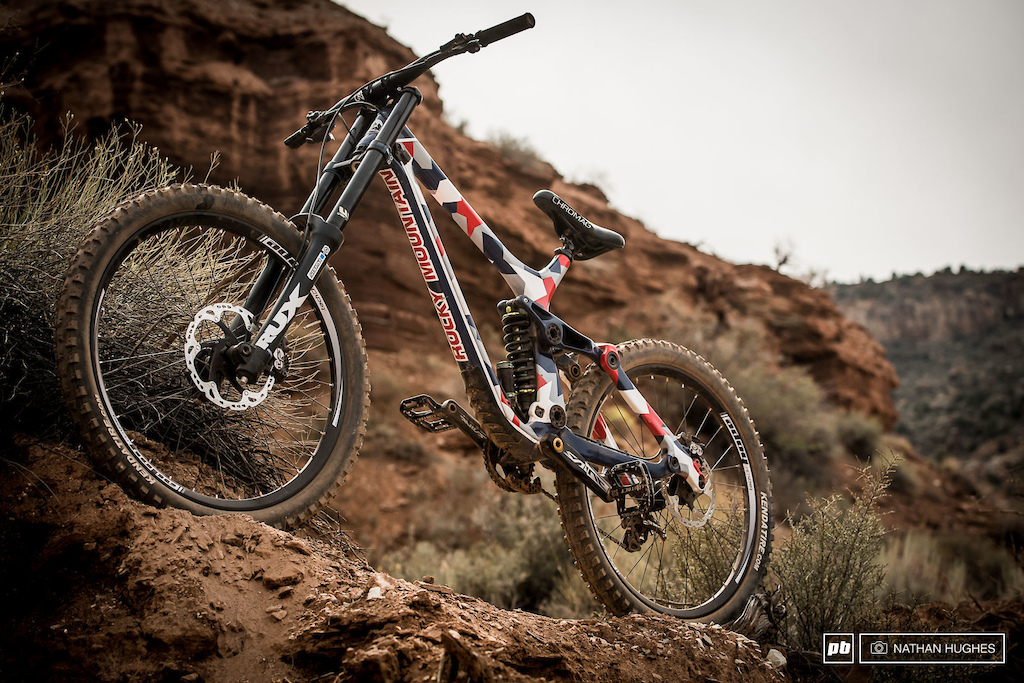 RockyMountainBicycles Plus (Oct 13, 2016 at 13:50)
@frojoe @sjdeweese thanks! We worked on the paint project with our buddy Stacy at Painthouse Customs. Glad you like it, we're fired up!

obee1 Plus (Oct 13, 2016 at 15:59)
@RockyMountainBicycles: stacy is a phenomenal painter. what a great decision to go with painthouse, you might consider his input for all your fleets paint designs.

sjdeweese (Oct 13, 2016 at 20:05)
@RockyMountainBicycles: Father was a Marine in Pacific Curtain WW2. So I'm also a bit partial to any military theme. And any company that supports troops openly is A OK with me!!

skidrumr (Oct 14, 2016 at 9:25)
@Matt-Pau: Bike should have a little Eddie figure on it somewhere, maybe riding a bike made of skulls and fire

Jokesterwild (Oct 13, 2016 at 15:32)
People are such babies. I was riding in Revelstoke and ripped apart my michelin. The only replacement in a tiny town was a nevegal. Slapped it on and went and road steep losee terrain and it was fine.

gooseman310 (Oct 13, 2016 at 16:35)
@loopie: True ...but they are heavy but worthy in very rough conditions but do cause some lack of pace i the pedaling up department when your on a DH casing but still a reliable in the rough sharp rock dept. which i like to use in those cases but do switch up to shwalbe on other conditions

dzenyy (Oct 22, 2016 at 15:10)
Oh, my XC bike (26' Nakamura Summit Lite XT) has some Kenda tires. Never had any problems with them. However, I wouldn't give my life into their hands on harder terrain, than they're used to ride on (mostly moving my lazy ass, as i freakin' hate to walk). I'm from Poland, so it's not like North America, that having a car is a must. I live in small city (100k ppl) so i can either walk, or ride to my university (or everywhere else inside my town). 4 minutes vs 25 is a big difference. I hate walking, running, nordic walking and all of that sh*t, when you have to go from place A to place B. Doesn't have time to go by foot. At least i'll go by bus, but it's kinda little nightmare in Poland.

alexander80 (Oct 13, 2016 at 12:24)
That rear triangle looks unbreakable. It is so massive. Never seen such big bearings on any other bike

RockyMountainBicycles Plus (Oct 13, 2016 at 13:53)
We designed the Maiden from the start to be set up in either wheel size. The lower headset insert along with the 2nd rear axle position make sure there are no compromises to geometry or steering dynamics.

E-ROG (Oct 15, 2016 at 10:05)
@RockyMountainBicycles: This bike has me seriously looking at Rock Mountain for my next bike. Love everything about it, but please go back to threaded BBs. Beautiful bike!

Feels like they had rampage in mind when writing that song

rabidmonkfish (Oct 13, 2016 at 16:25)
cool to see a company offering real choices to let people use either 26 or 650b. 650b not necessary but if you wanna ride it that's a ok by me but i just want the choice to ride what i want you know just like the industry promised. cool paint job by the way...wasn't sure of it at first but i rather like it after a longer look.

mikekazimer Mod Plus (Oct 13, 2016 at 11:02)
He is, but Suntour doesn't currently make a DH rear shock. DVO manufactures their products in the Suntour factory, so Suntour provided Carson with the Jade.

Gasket-Jeff (Oct 13, 2016 at 14:35)
Hey effin bike indust even the pros want 26er wheels. Stop selling us he planned obsolescence ones size fits all crap. Stop trying to kill of the sales of dh and freeride bixe. (Normally I wouldn't name names but) bow cycle has like 600 bixe on their show room floor and 2 of them are dh bixe. Calgary cycle used to be so fun to go to because more than half the showroom was dh, now none. 26" wheeled dh/freeride bixe please!!!!

suspended-flesh (Oct 13, 2016 at 12:32)
@gramboh: I really don't know - maybe because the 180 produces less immediate stopping power (weaker), there is more lever-throw to play with before full-stop bite? I've never really thought much about it - I come across that modulation argument/statement from time to time.They both work fine for my needs, but I happen to have 200s F&R.

Maybe he feels the same.

groghunter (Oct 13, 2016 at 12:44)
@endlessblockades: To address some of the other comments I couldn't see when I typed mine: I wouldn't really call it for modulation, more that it feels like I can pull both levers the exact same amount & get exactly the balance between front & rear braking I want. makes braking simpler, I guess. but 90% of it is that it just feels comfortable to me, & I'm used to it.

(If you didn't know, you cannot get 185 post mount adapters, only 180. so when I switched from a bike with IS mounts to post mounts, the new rotor & bracket I had to buy was unexpected.)