Catching Up with Casey Brown - Interview

Join Pinkbike  Login
Casey Brown's infectious smile and enthusiasm are hard to ignore, but it's her presence and raw bike handling skills that have catapulted Casey into the hearts and minds of many of us. After a few years of back-to-back seasons on the downhill World Cup circuit, Casey has taken a different path for 2016, instead, choosing a program all of her own. Arguably one of the raddest riders on the scene right now, we caught up with Casey in Les Gets to see how her year is shaping up... 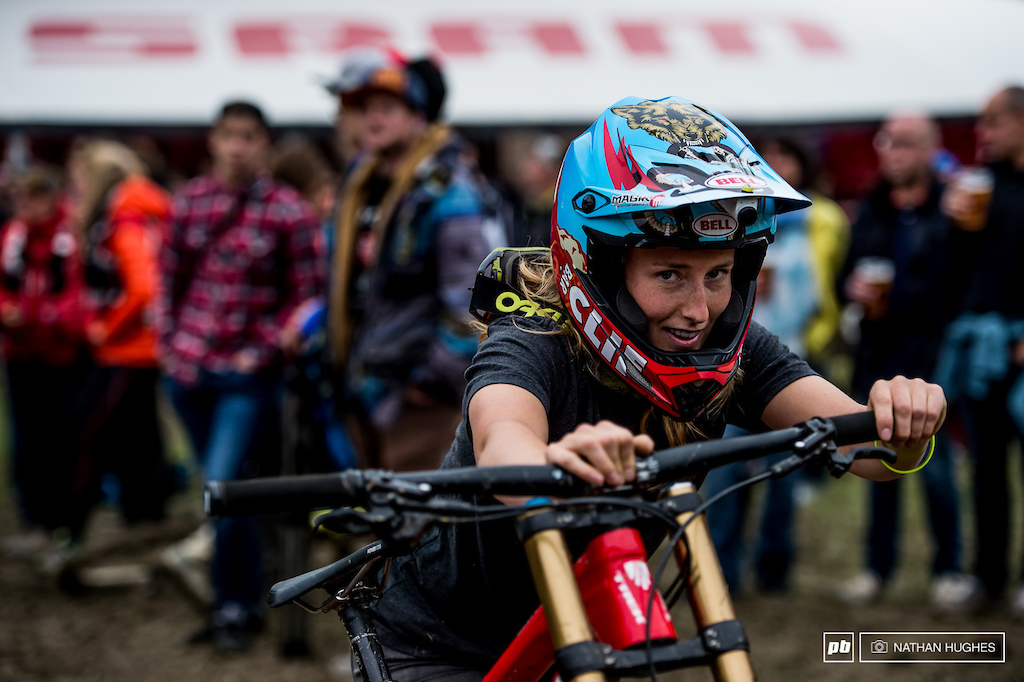 Understandably buzzing and on her way to hitting the whip off sender... again.

A new year and a totally new program. Can you tell us more about your move from World Cup racing and why you've switched things up?
So this year is a bit different for me. I'll be doing a lot more filming and photo trips, along with Crankworx competitions and a few EWS events. Believe it or not, my schedule is busier than ever but I get to do more from home which is nice. My reason for the switch is to have a bit more control over what I do during the season, to be a bit more creative in my riding and work on some things I've had on my list for a while.

What are your thoughts with regards to the current state of World Cup downhill downhill racing and do you think anyone can break Rachel's winning streak?
The World Cup downhill is for sure the pinnacle of the sport, really inspiring to see how hard those athletes work. Rach is killing it right now but I know how determined the girls are to get on the top spot, it's bound to happen eventually, maybe in the next couple rounds?

Can you tell us a little more about your program with Trek this year?
So I'll be mostly Crankworx focused this season. I'm looking forward to spending some time filming in my hometown - it's always nice when you can showcase where you came from. 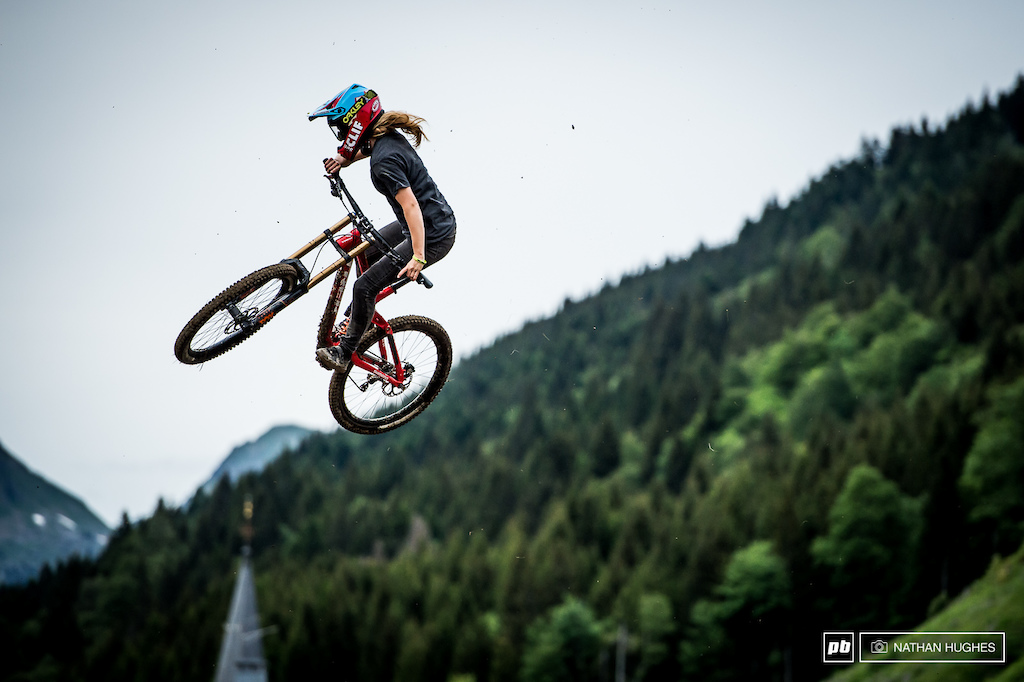 It doesn't matter what the event is, Casey is in there and getting rad! Sideways action from Les Gets, 2016.

Was making the leap into enduro ever in your game plan and have you surprised yourself with your results so far?
I honestly thought I'd never race an enduro, but hey, the offer was there and it's hard to say no to riding in some of the sickest locations in the world. I've only ridden one EWS so far and yes it was a surprise to place 2nd.

Have you had to switch up your off-season training in preparation for these new challenges?
My training hasn't really changed too much, I'm still training with PerformX. I did get a sled this year so winter had a lot more backcountry days, and wrestling a 450-pound machine around in the deep snow has to be good for something right?

You smashed the whip-off contest at Crankworx Les Gets and have a reputation for being one of the raddest women in the sport, but do you consider it an insult or a compliment when people say that you can ride like a guy?
I take it as a compliment because I think they intend it to be a compliment, but I do wish the stereotypical "do anything like a girl" (run, throw, ride, etc) would just go away, for the kids sake, it's just so limiting for young people. 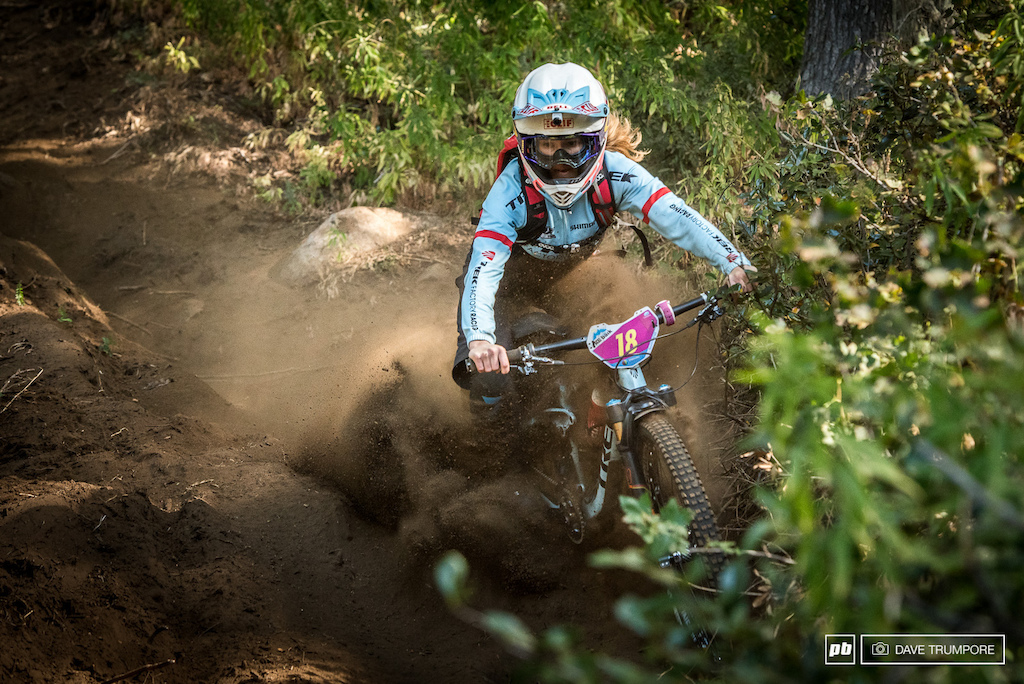 How many riders score a second place overall in their first ever EWS?

Of all the riders out there, who's your favourite?
My favorite rider to watch/follow is R-dog... the kid has unmatchable style.

Is it true that your dad killed a moose with his bare hands?
Yes, it's a really sad story, but when he tells a story I always listen because you know sh*ts about to go down.

Can you tell us a little more about your involvement with Revelstoke?
I'm a tourism Revelstoke ambassador, along with a few other athletes who call it home. We have a few little projects going on and it's sweet to represent my hometown. 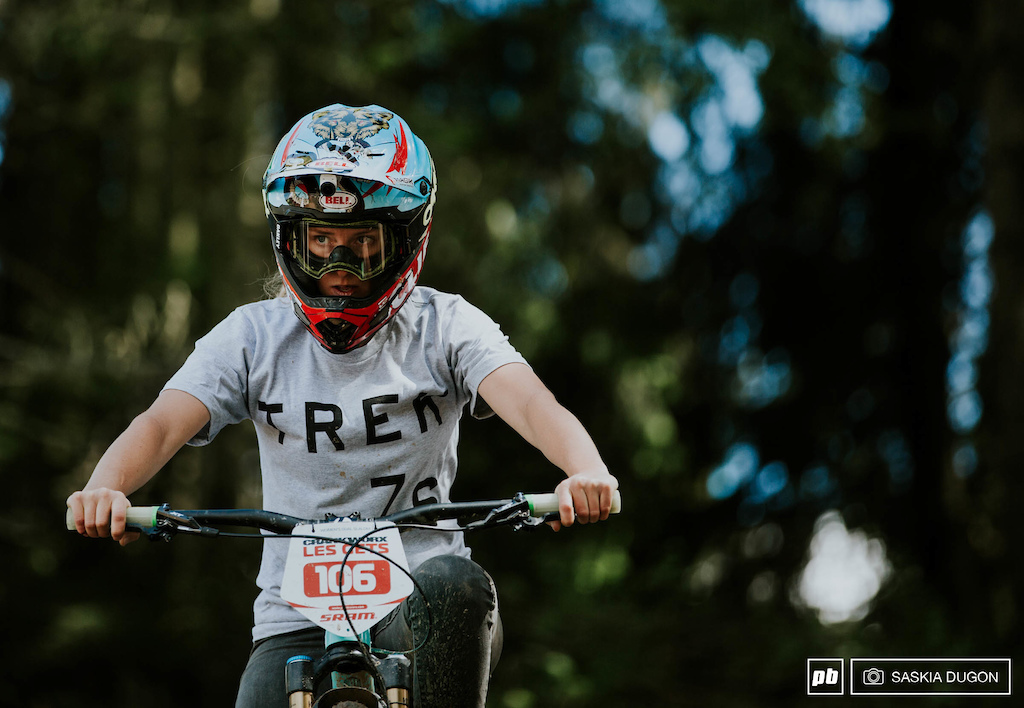 In the zone and getting ready for the dual slalom, Les Gets, 2016.

How does Crankworx compare next to the World Cup and EWS?
They're all on the right path, but World Cup DH will have a deeper pool of legends, because of the longer history, and maybe a more "core" following because of that. 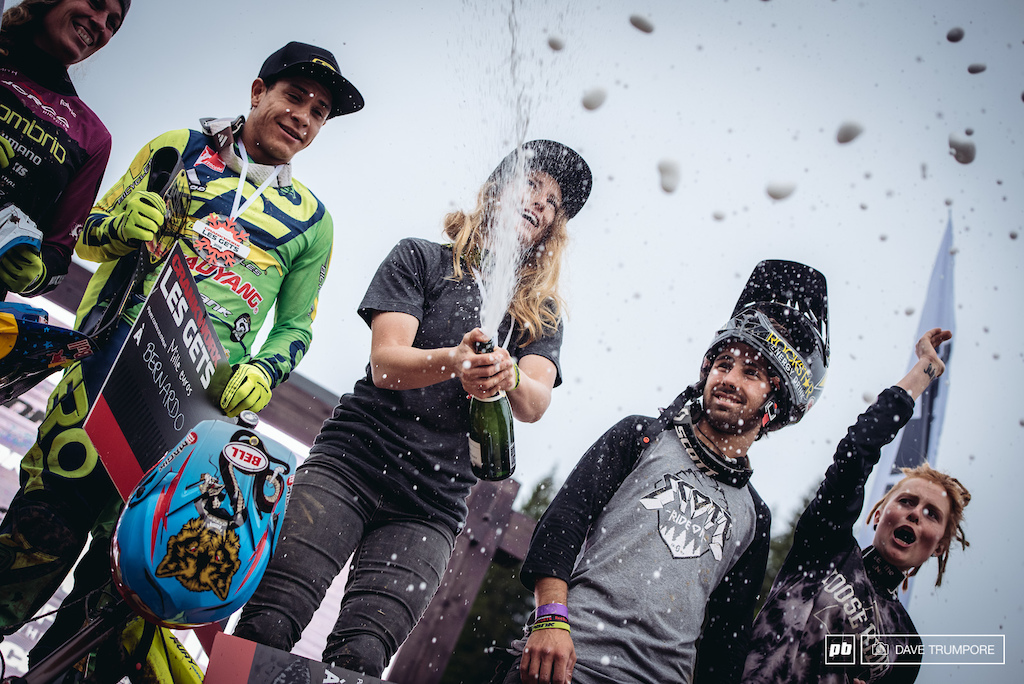 What's the story behind the graphics on your new helmet?
I ride for Clif Bar in the same sense as anyone with an energy drink graphic on their helmet - I like to promote healthy lifestyles and I know kids are watching.

You're known as a tough cookie and someone who can look after themselves, but is it true that you used to work in construction during past off-seasons?
Yeah, I used to work under an industrial electrician as an apprentice, on the railway, and in sawmills... interesting work.

What are you plans for the future?
Ride or die. 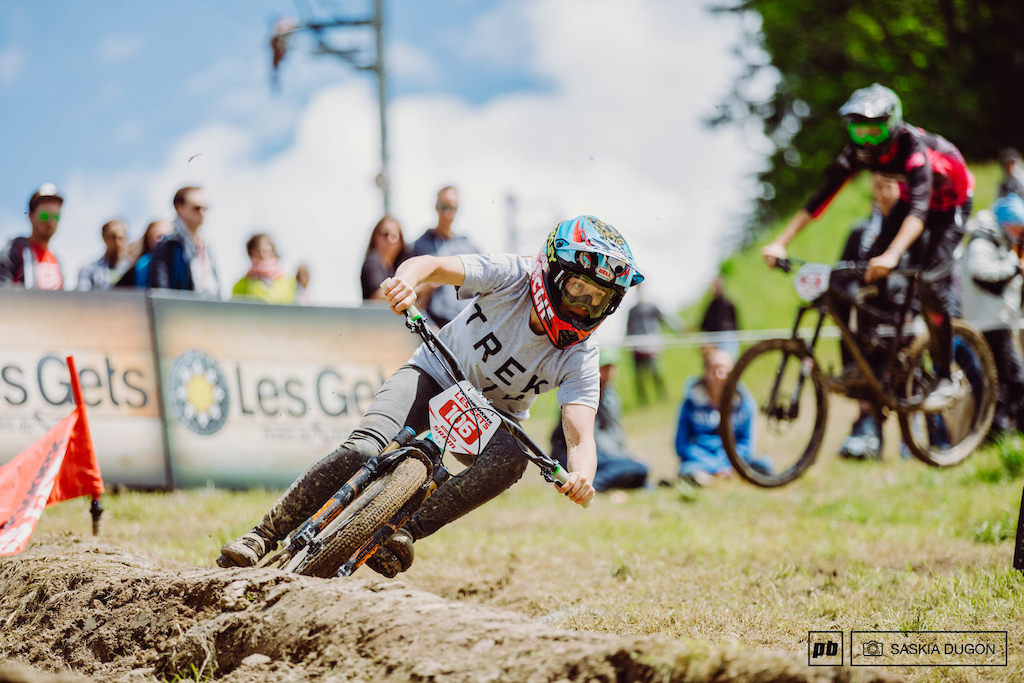 If you win the Queen of Crankworx title this year, how will you celebrate?
Patron on ice!

kmayHD (Jun 21, 2016 at 10:46)
Gonna be tough to lose the sterotypes when those knob crankworx announcers say shit like "This is definitely a mans track, but the girls are out here doing it" which was said I think maybe during Caseys run during the DH race live feed.

NMK187 (Jun 21, 2016 at 14:53)
That was especially bad, but pretty much everything they say is cringe-worthy. I actually feel like its bad for the sport to have them announce anything.

moose-619 (Jun 21, 2016 at 17:47)
fairly new to the mountain biking scene but i've gotta say i'm really stoked on the awareness within this community of riders when it comes to gender norms and attempting to move away from such comments and stereotypes. much more refreshing than in other cycling communities. smiles!

stacykohut (Jun 21, 2016 at 21:01)
@drtyboy: maybe if they did like in world cup skiing , we wouldn't have to watch half the women's field barely get down the track on race day.

the participation numbers would be waaaaaaaay up if the world cup and nationals had women's sections.

fact: they have less power.
even lindsey vonn and racheal would admit to that.

they have women's sections in bmx for the olympics.

sometimes our sport is soooo backwards it really does hold the women back from growing numbers at the elite level.

its works for bmx and dh skiing, it will work for wc dh mtb.

i'd rather see a woman rip a 40 foot table top with steez and 'sell the sport' than watch them case the shit outta a 60 foot table.

hasn't there been a few races this year in the women's class where someone crashed and still made the podium?
whats that all about?
seriously....

i'm not talkin about a full women's track(to expensive/logistics), just a few sections where the women can excel and 'sell the sport' more to other aspiring women and younger girls....

JQualey (Jun 21, 2016 at 9:49)
Thanks for being a positive role model for the younger generation of female shredders. My 8yr old daughter thinks you are great.

SteveDekker (Jun 21, 2016 at 9:41)
Her old man killed a moose with his bare hands. Thats baddass! Whats sad about it? Unless Moose was the name of her first boyfriend or something. Good job!

Ride12 (Jun 21, 2016 at 10:28)
Probably in self defence, still, to kill a charging 1 ton moose is absolutely crazy. You have to have seen one in person to understand just how powerful creatures they are.

atrokz (Jun 21, 2016 at 10:30)
@Ride12: Something tells me this wasn't a charging moose. Nobody is going to stop one with their bare hands. Chuck norris becomes Chuck-the-Cuck when being chased by Canada's finest. They are huge.

Golden-G (Jun 21, 2016 at 12:49)
One of the raddest people in the sport. Tough as nails. Shreds so hard. Humble and absolutely lovely looking to boot!

ryanr98 (Jun 21, 2016 at 13:56)
Got a chance to ride along side Casey when she visited my hometown. She was showing up the boys the whole time and has the smoothest style ever. Most humble and rad girl on the circuit and in general.

(I'll catch up someday on those whips !!)

endlessblockades (Jun 21, 2016 at 11:33)
Casey is awesome! How come she wears a podium tooth when the trackside interview was sans-a-dente?