Join Pinkbike  Login
There are too many riders out there that know this: to be a privateer you’ve got to love your sport. You have to have passion, heart and the drive to train and race for little to no money.It means working full time and training in the dark, digging dirt jumps out of the snow because you can’t afford the fuel to get to somewhere a little warmer, even if it’s only 1.5 hours south. It means flogging old bikes to get to a few races, fixing your own flats and sleeping on the floor. It means often learning about racing the hard way...It means a lot of sacrifice that comes with a “normal” life for something that you want to do, be and live like. I missed camping trips, parties and family weddings. I struggled making ends meet. I don’t have rich parents. I remember asking my older brother why I couldn’t just be happy to be a normal person with a normal job? And before I could even finish the question, he said: “Cuz Claire, you’re not normal.” 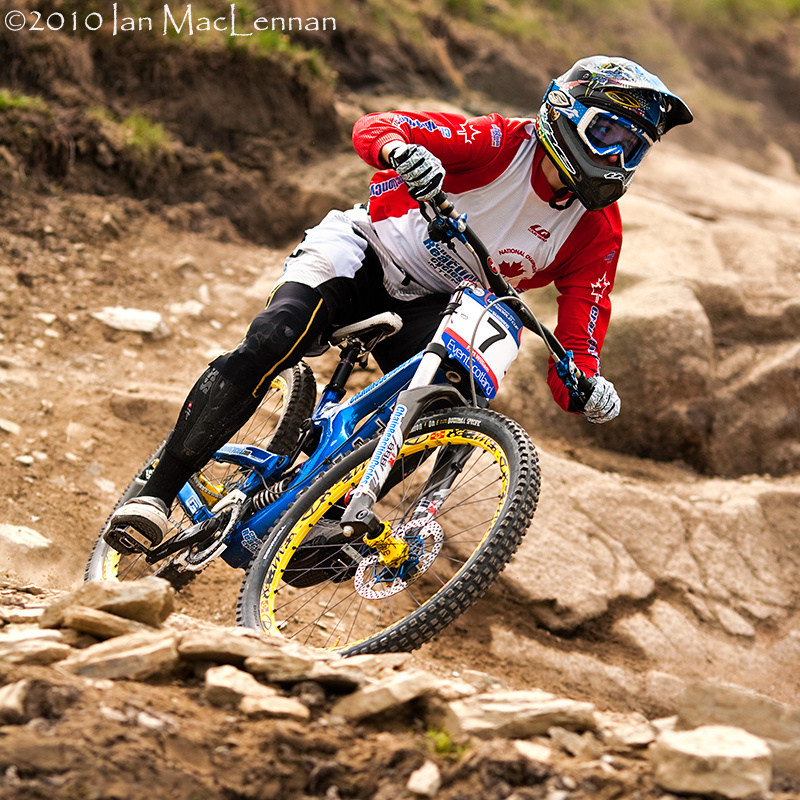 There is a vicious circle in mountain biking and in a lot of sports, I suspect: Often, you can’t get results without support, but you can’t get the support you need without results.

Now, there is an exception to this rule. I was grateful to be supported by a handful of amazing companies who recognized my efforts to prove myself, who gave me what they could, even though it didn’t always allow me to eat.

For most of my career as a mountain bike athlete, I have been a privateer. And although the adventure far out weighed the struggle, it was hard to show and express my full potential.

But for the last 2 seasons, I was lucky enough to be a part of a full factory world cup team. Lets face it, there aren’t a lot of teams out there for the amount of talent. ChainReactionCycles.com/Intense took me on board and I raced the full circuit on their dime with my own mechanic and my own chair in the pits. Now lets not kid ourselves here…although Nigel Page believed in me, being married to Chris Kovarik had a significant impact on why I was able to be a part of this team. But I swallowed my pride and used it as an opportunity to finally live my dream. And I believe I contributed. I brought a different flavor to the all male world as well as accumulating valuable points toward our World Cup Team Overall win in 2010. I grew so much as a racer and athlete in those 2 years, more so than I had in 8 years of being a privateer. I was able to focus on one job, which was riding. That’s it. I stood on a World Cup Podium. I, as annoying as it was, earned the nickname “7” by managing a full consistent World Cup Season 7th place streak and then finished 7th overall! 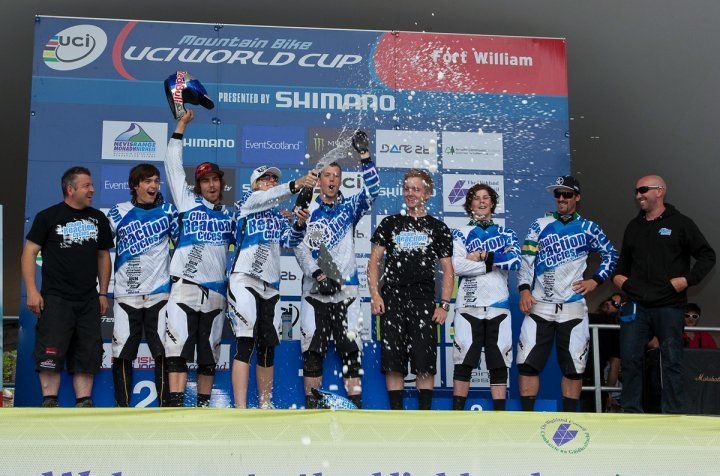 It is hard enough to get ahead in this world without having a massively expensive “hobby”. I don’t know exactly what will be in store for me in 2011 as far as racing goes, those things are still being worked out. But one thing I do know is that this entire adventure has made me a better, faster and stronger person.

From my hucking no footer days through the squid years and from the confidence building years until now, thank you to all of my sponsors, believers and fans. Your support and generosity was never and will never go unnoticed! 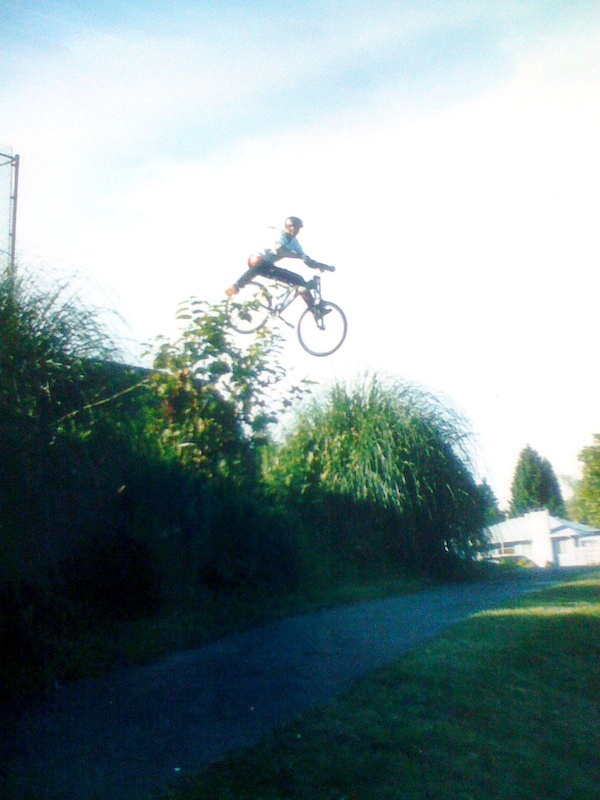 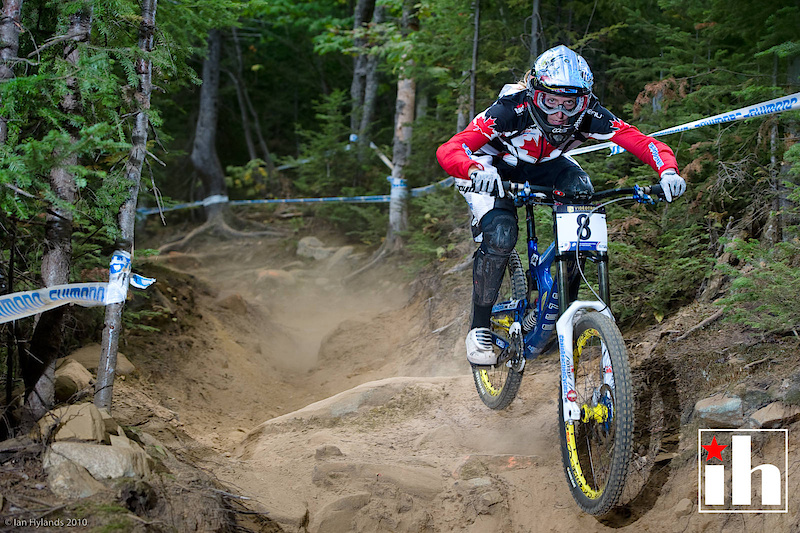 Claire was born and raised on the North Shore of Vancouver. She didn't pick up a mountain bike until she was about 20 years of age but has never looked back. She has traveled the globe racing, riding and adventuring on her bike. Married to Aussie DH star, Chris Kovarik, she now resides between Whistler and the tropical coast of Queensland. She recently graduated from Sessions School of Art and Design and now freelances when she isn't riding her bike, snowboarding, hangin' at the beach or lake, doing yoga, art or hanging out with her amazing assortment of friends from around the world.

She owes these Recent Career Highlights to all of the support she has received over the years:

Rider Perspective is a weekly article (airing on Fridays) that will feature our sport's most well known personalities, writing exclusively for Pinkbike.

nouser (Feb 4, 2011 at 12:43)
im in the same position as the beginning with motocross, only a couple small sponsors with basically no support, guess i'll just keep going at it and hope for the best, really inspiring post, thanks for writing

jdigdog (Feb 4, 2011 at 8:55)
Wow - what a great article showing the reality of racing at this level! It sounds like you've had to work hard to where you are, but enjoy not living the 'normal life'. Watch out for floods and cyclones if you're still in Aus - hope your family-in-law is not affected. Think it's awesome that you and CK are married - a couple who plays together, stays together!

downhill101 (Feb 4, 2011 at 11:39)
Wicked article! This is the kind of people we need representing our sport in magazines and internet articles. At the end of the day its not about how much money you make or how fancy your bike is. Its about doing what you love!

heres the link of why i asked...

rstwosix (Feb 4, 2011 at 3:27)
Great story about a female DH rider - and no stupid comments from idiots yet, which is a bit of a contrast to the story a few days ago (Girls Who Ride). All the best Claire.

IMO i liked cams one better so far

But still great read this one, thanks

mkem (Feb 4, 2011 at 8:43)
Nobody hucks like BUTCHER! Your constant hard work and determination is very inspiring.

You've also got to be lucky enough to be middle to upper middle class.

bikeaddict123 (Feb 5, 2011 at 12:21)
"It means a lot of sacrifice that comes with a “normal” life for something that you want to do, be and live like... I struggled making ends meet. I don’t have rich parents." dude did you even read the first paragraph?

yesok (Feb 5, 2011 at 13:17)
Yes, I read it. The article implies all you need to do to be a "privateer" is to love your sport, it's insulting.
There's a little more to it than that. "I don't have rich parents" could mean they don't own a private jet and aren't millionaires. Great.
Like I said, it's impossible to race abroad full time without a lot of money behind you - the only way is to work full time and race in your own country and gain some sort of sponsorship, perhaps getting out of the country a couple of times a year if you're VERY lucky. It isn't possible for a working class schmuck with more bills than dreams.
My main beef with this "article" is it being less about inspiring people without sponsors to suddenly be able to race world cups as long as they love their sport enough and more about promoting Claire Buchar.

brule (Feb 6, 2011 at 21:08)
@Yesok - How one grows up doesn't always play into how they approach their own lives once out from under their parent's roof. We had a rider that rode for us for a few years - Derek Chambers - and he'd work at a bike shop full time all Fall, Winter, Early Spring saving his money, eating on the cheap and scrounging together to race come mid Spring time. We saw this in his drive and so did folks in his home town of Nelson and he was able to put together enough money for one season on the WC circuit (it'll cost 20-30Gs to do it on your own) and pursue his dream to see if he had what was needed to get to that next step. Now take Claire, maybe there were a few more opportunities to find sponsors as a top female in Whistler (arguably the MTB DH Mecca), but most was in the form of parts (which you hold onto until the last moment and then sell to get to the next race) and very little cash. If you want something bad, enough you'll find ways to make it happen. Yes this was about Claire and in the coming weeks, it'll be about other athletes, enjoy their stories too.

specialized15 (Feb 4, 2011 at 22:16)
thats wierd she posted this cause i was getting that awesome feeling to ride my bike for "little to no money".