The downhiller's loudmouth challenges the 9 times cross country world champion in an epic e-bike race on the World Cup Downhill track in Lenzerheide, Switzerland, to raise funds for Pump for Peace.

The ultimate e-bike race between Nino Schurter and Claudio Caluori is set to take place on 9 October 2021 with the aim to raise 1 Million Euro for Pump for Peace projects in countries all over the world, making cycling accessible to everyone.

- Taking e-bike racing to a new level in a never seen format
- Over 10’000 vertical meters of climbing and redescending
- 25 climbs of 403 vertical meters to the top
- 25 downhill runs on the World Cup track in the Bike Kingdom in Lenzerheide
- Nino’s and Claudio’s sponsors joining the effort for the fundraising
- Spectators and fans participating in the fundraiser on pumpforpeace.com

- Whoever finishes the 25 laps first, wins the race.
- Riders are allowed to swap bikes similar to cyclocross racing in order to change/charge batteries. 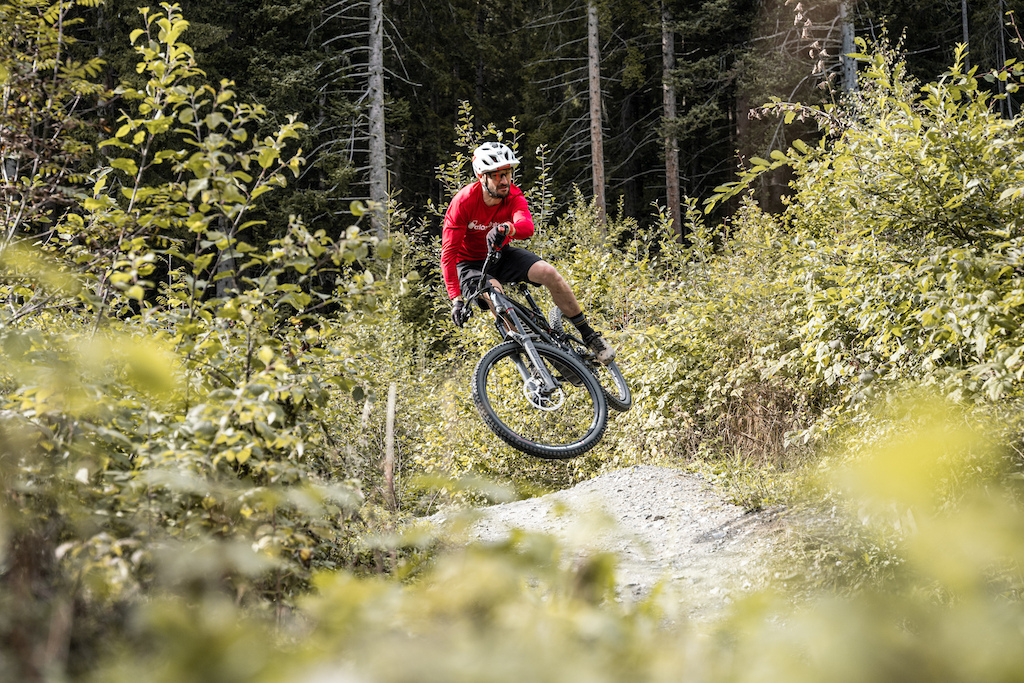 What is Pump for Peace?

Pump for Peace, is a global initiative by Velosolutions introducing kids to a healthy, respectful and tolerant lifestyle. Velosolutions Pump Tracks are social hubs and a great platform for communities to develop a sense of togetherness. At Pump for Peace, we collaborate with governments, local organisations and private companies to bring pump tracks to underprivileged or disadvantaged areas.

How did this get started?

Nino and Claudio went for a ride together in their home town just after Claudio came back from a crazy Pump for Peace project in Israel during the conflict in May. Claudio must have still been buzzing from that experience when he thought he could challenge the World’s greatest Mountain Bike Cross Country racer in a competition that could take all day long.

What was Claudio thinking?

The answer to that is very clear: He wants to get all of those projects up and running, that are waiting to be built in South Africa, Uganda, Ethiopia, Palestine, Iran, Tobago, Navajo Reservation, Armenia, and many more.

Nino has been one of the “Guardians”, which is a team of Pump for Peace ambassadors, for quite a while and he knew, it was time for him to act. So, despite a totally crazy busy season, including the Olympic Games, he committed to take the challenge and help make cycling accessible to people all around the World.   Immediately, SRAM, Scott, Vittoria, PeakPunk and GoPro confirmed to join our efforts to make this happen, which we’re very grateful for! The money from the partners and sponsors go to Pump for Peace just like the donations from the fans and spectators.

How can you help, participate, donate?

- Please spread the word and visit pumpforpeace.com/neverresting to make a donation to help us reach our goal of 1 million Euro for projects in Africa, Central/South America, Asia, Middle East.
- Come to the event in Lenzerheide on 9th October
- Join us at the concert in the Kurhaus after the race


Nino and Claudio say thank you to all who contribute to this insane project.

tkrug (Oct 4, 2021 at 11:53)
Claudio needs to find 25 limiter-removed, high assist to effort ratio modified e-bikes (if thats even a thing) and just grab a new one every lap.

rodeostu (Oct 4, 2021 at 11:49)
Novel idea, but I feel like there's no way Claudio can gain enough seconds going downhill to offset Nino's climbs. In fact, Nino's endurance and conditioning is probably enough that he can start winning the descents once Claudio starts getting heavy legs.

medievalbiking (Oct 4, 2021 at 12:51)
Is Claudio even faster on the DH to start with? I know he used to be a DH racer, but he's retired and Nino is a really really fast xc descender from what I've seen?

Darwin66 (Oct 4, 2021 at 14:31)
@medievalbiking: There was a video a while ago where Claudio went for a ride with Nino, Claudio on a kenevo and Nino on his fixed post spark. They seemed pretty evenly matched, so I think on equivalent bikes, Ninos gonna be a fair bit quicker downhill.

medievalbiking (Oct 4, 2021 at 19:14)
So Nino is probably quicker downhill and definitely significantly quicker uphill... they gonna give him an ebike lite or what?

dirtmcleod (Oct 4, 2021 at 14:01)
@cgreaseman: The point of it being free is a comment on them not being able to afford it as the explanation for it not being done.

LiquidSpin (Oct 4, 2021 at 11:21)
and how is this a competition? More like a few hours of torture for Claudio even with the aid of an e-bike. This should be good to watch! haha

vinay (Oct 4, 2021 at 13:29)
How can there not be a pumptrack race included. That's the bit I'd want to see. Nino against Claudio in a pumptrack race. On a mid-motor e-bike if they want as long as the chain is removed.

dirtmcleod (Oct 4, 2021 at 13:59)
The point of it being free is a comment on them not being able to afford it as the explanation for it not being done.

rodeostu (Oct 5, 2021 at 9:06)
After a period of initial cynicism, I'm now sold on this - a charity gets money, MTB fans get to watch Nino curb-stomp Claudio going up and (most likely) going down, and some Swiss people get an excuse for a concert and some beers before getting snowed in for the winter.

want to donate, but no credit card and no paypal option. bummer. good luck nino and claudio, enjoy Lenzerheide

kazwei (Oct 4, 2021 at 12:03)
Who cares? Maybe some kids in South Africa, Uganda, Ethiopia, Palestine, Iran, Tobago, Navajo Reservation, Armenia who will get a pumptrack when enough money is raised but obviously not you, you prefer to be a little d!ck about it. Pumpforpeace has made a lot to bring a little fun to places less privileged.