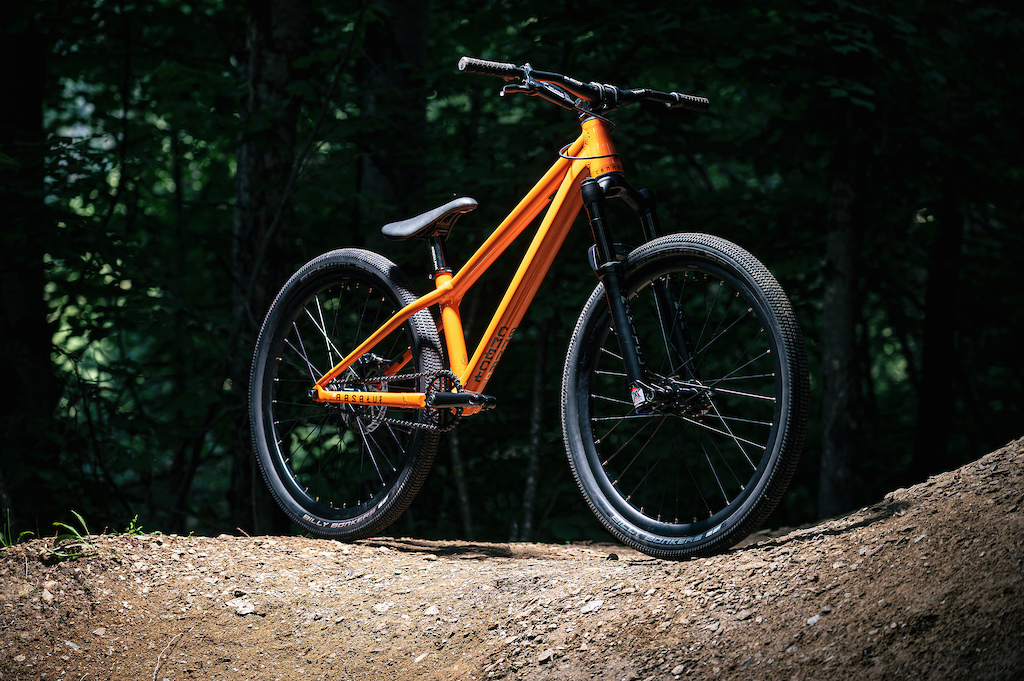 The most common route for young riders getting into dirt jumping would be to start on a BMX and then graduate up to 26" wheels when they're strong enough to handle the extra weight and size. Now, riders can get used to the feeling of a mountain bike quicker thanks to Commencal's Absolut 24" - a kids' bike that's aimed specifically at dirt jumping. We'd already spotted 11-year-old FMB competitor Finley Davies riding on a prototype version of this bike and now Commencal is releasing it to the general public. 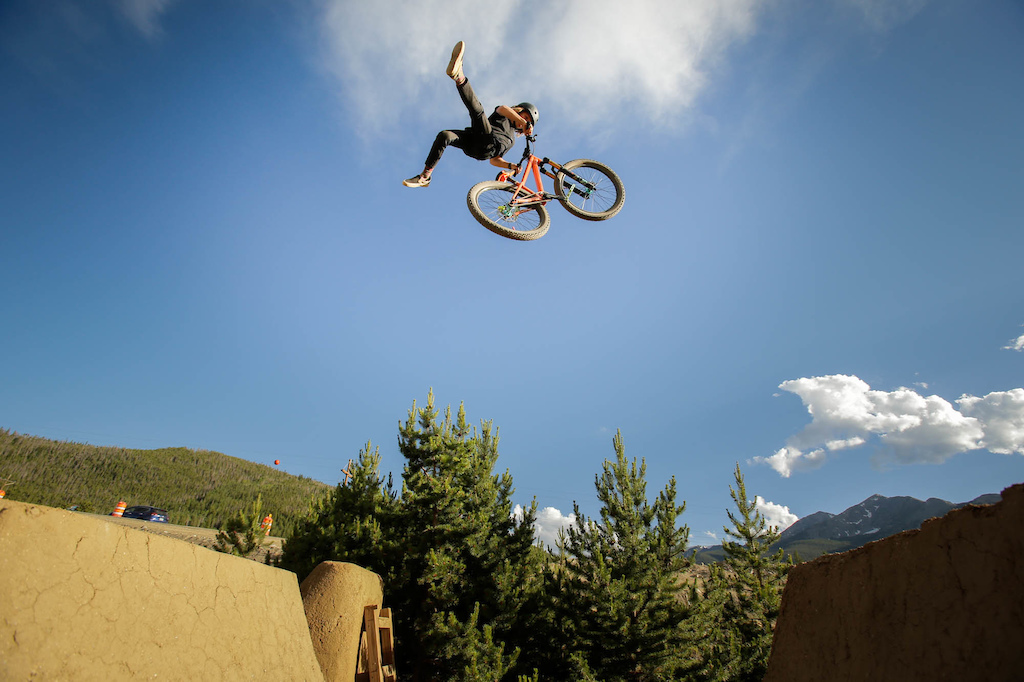 This is a new frame from Commencal and not just a standard Absolut with smaller wheels swapped in for little riders. While it has been shrunk, it still keeps a lot of the dirt jump features of a regular Absolut including tabs for a gyro headset, a chain tensioner and a bottom bracket that slows the rotation of the cranks. There's a 100mm Manitou fork on the front to deal with the big hits and a kids' sized cockpit from SDG to help with control for smaller hands. 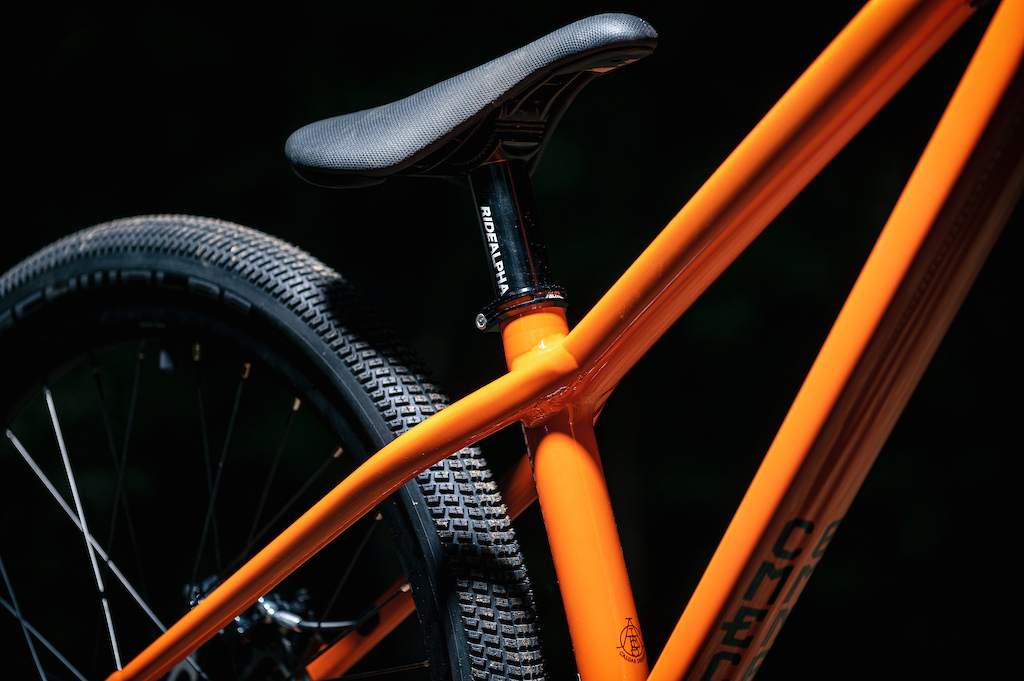 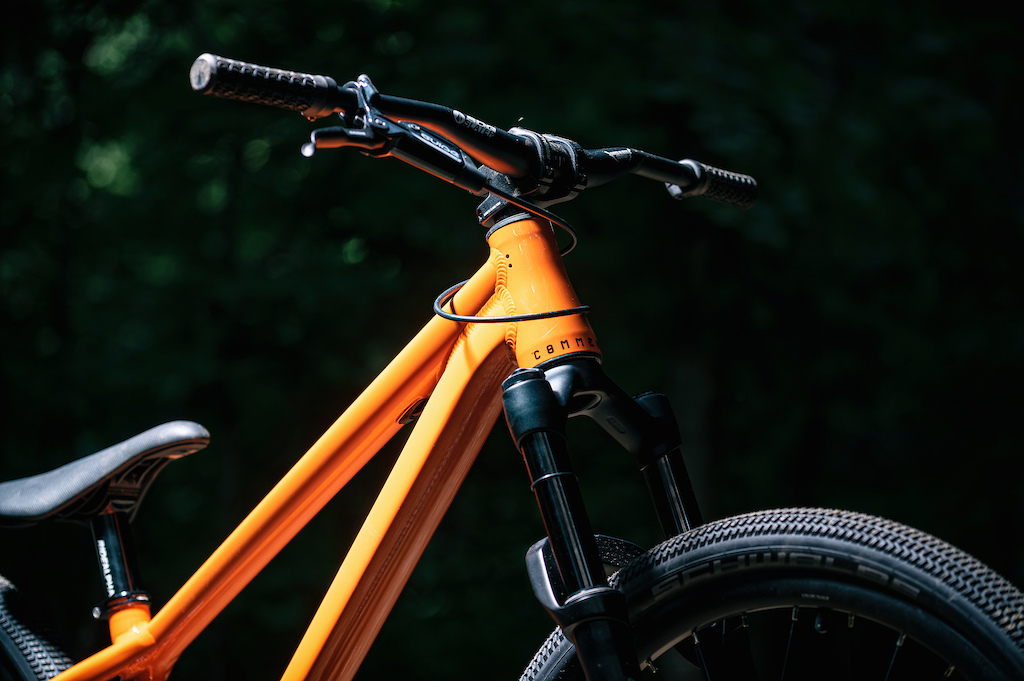 Commencal's trail offerings for kids are split in two with the 24" range catering for children between 125cm and 150cm in height and its Junior range for 145cm to 160cm. This Absolut sits between those ranges and Commencal says it is suitable for kids across that range, from 125cm to 160cm. 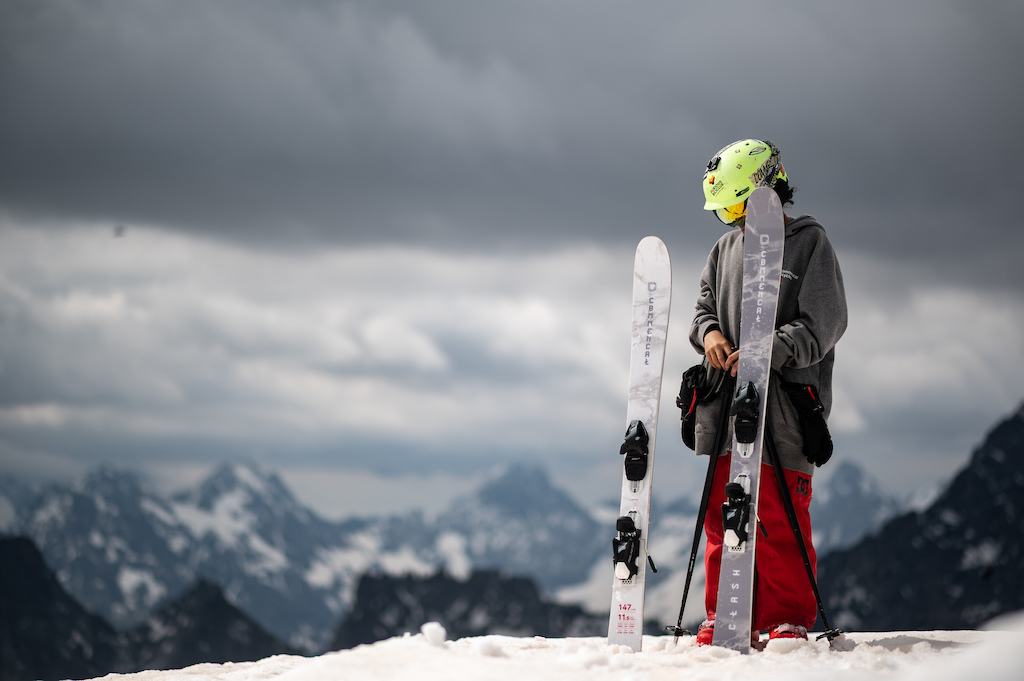 Commencal has also updated its ski and snowboard range for the upcoming winter season with updated geometry and construction. It has also introduced a range of kids' skis and its first-ever snowboard for this year.

More info on the entire Commencal snow range can be found, here.

DidNotSendIt (Sep 22, 2020 at 0:32)
Is Commencal's ski/snowboard range popular? I've been snowboarding a number of years and have never seen any of their products for sale or advertised with the large retailers i tended to use, nor have i seen them mentioned or promoted in any snowboarding media (magazines, films etc) or athlete sponsorship.

I don't mean this as a criticism, just genuinely curious. I took an interest in snowboarding a few years before i [relatively recently] got interested in MTB. It is only recently through MTB i had heard of Commencal.

I even did a snowboard holiday in Andorra and can't recall ever seeing the brand name.

If your boards go as fast as people say your bikes do, you should be on to a winner!

Also, i loved Andorra. Would love to go again.

diegosk (Sep 22, 2020 at 5:52)
Commencal skis are made by Faction. High quality stuff. Look up some Candide Thovex videos to pump you up for winter.

Hello,
the first year only. Since last year we are producing our own skis, with our own shapes and flex.

diegosk (Sep 22, 2020 at 8:53)
@COMMENCALbicycles: cool! I was not aware. Always a good sign to see companies taking matters into their own hands.

Still recommend the Candide videos though...

timrippeth (Sep 22, 2020 at 22:09)
@diegosk: So much this. I could watch Candide shred all day. Who would you say is his mountain bike equivalent? I've spent more time thinking about that topic, than I probably should have.

pakleni (Sep 22, 2020 at 0:49)
@COMMENCALbicycles I like your bikes. I really do. So already in our stable we have Ramones 12, Ramones 14 and Ramones 16. We skipped 20" Commencal because I thought some other brands made a better job.
If you want as back for 24" model, you should
do something with excessive weight of your kid's bikes. I would rather pay more (like I did with 20") than force my kids to ride an ulta heavy bike

pensamtb (Sep 22, 2020 at 4:04)
@pakleni: highly recommend the Early Rider Seeker series (have/had mine on the 20" and 24" versions). The spec is very decent and you can still take out some weight when the tyres are done (e.g. a set of 24" Rocket Rons takes another 500g or so off the bike). Also, they have adjusted the pricing recently and I think it's sensible given the relatively high re-sale value.

pakleni (Sep 22, 2020 at 4:23)
@pensamtb: I've heard they fixed that ridiculous standover hight. If that's true, then they should be on the short list

Svinyard (Sep 22, 2020 at 8:12)
It's always been their tank wheels and silly plus tires. They have gotten a lot better for 2020. Spank wheels and finally proper crank length. Give them another look. Its the rotational weight that slays kids. Whatever you get...you want as much of the Manitou/Hayes/Sunringle/Protaper stuff as possible. Its nicer than what most of my adult friends ride, literally. And it only gets better every year. That's why we have some Commencal stuff, proper geo and legit suspension. Cheers to them for spec'ing that stuff and continuing to do so. They are doing some sick stuff for kids. This DJ is dope

Let's say that you're 90 kgs heavy. How would you feel cranking up the hill a bike thst weights 55 kgs? And no gears. Singlespeed baby!

bombdabass (Sep 22, 2020 at 1:11)
Id buy one of their normal 24 inch bikes for my daughter who wants to get into riding but most 24 inch mtbs seem to come without front suspension which is frustrating. If anyone has recommendations Id appreciated it.

xxinsert-name-herexx (Sep 22, 2020 at 1:31)
NS bikes have something which can accept a 24" wheel and a 100mm fork (a 26" Reba makes sense here, reduced to 80mm). Combined with some eBay deals and it seems like a great bike. Waki did one, check out his instagram for more details.

mountainsofsussex (Sep 22, 2020 at 2:50)
The Orbea MX24 range are really good - look just like an adult bike but smaller - long low, maybe not so slack, nice hydroforming. We got a rigid due to the excessive weight of most kids forks. The bike has big volume tyres which make up for it. The age 8-14 range is tricky, as fancy kids bikes cost as much as adult ones, and small cheap adult bikes, as we know, are generally pretty terrible. My daughter has pretty much grown out of her MX24 and I'm really struggling with what next

Svinyard (Sep 22, 2020 at 8:30)
Kids bikes are a mine field of screwed up spec. Only a few manufacturers have a whole package but you pay for it. Most have it screwed up. Orbea stuff is still janky in parts of the spec and haven't updated in years, so is everything from the big manufacturers. These are the good bikes with air forks, proper cranks and decent geo and tires: 24". You get what you pay for.

Commencal Meta HT 24": I love this bike, its beautiful and more importantly has the Manitou JUnit fork (all my kids ride). But...the wheels are ultra heavy, hot garbage (we have these wheels too...hanging up). You'd have to swap these, no joke. It sucks because the fork is so important so insanely nice. But the wheels are so bad. For a beginner tho, the cheaper air forks will be ok. For any other kid, there is no substitute for Manitou. Good luck finding anything tho, hard these days. FWIW, for new riders...a BMX or DJ is the best way to go and WAAAY cheaper(BMX). Find a 16" Cult Juvenile, Sunday Blueprint, Fit Misfit.

My 8yr is 15ft in air on his ultra nice commencal, but he loves his 16" used 150$ United Recruit BMX almost as much lol.

mountainsofsussex (Sep 22, 2020 at 13:42)
@Svinyard: ooh, good list. Wasn't aware of the nucleus 24". The others are quite pricey for something that'll get grown out of in 2 years. And sadly, unless it's an islabike, second hand kids bikes don't hold their value. Certainly not round here anyway

Svinyard (Sep 22, 2020 at 14:10)
@mountainsofsussex: It's hard to say if you haven't sold a nice kids MTB. A crappy Spesh Riprock won't hold any value. However most decent kids bikes (air fork hardtail) will net around 65%-75% in value after two years. MUCH better than any adult bike. Now its hard to see because these bikes often never hit the market. I have people lined up years out for our bikes...its weird. So with that in mind, kids bikes are more of a rental than an ownership unless you have multiple kids. Run a cost of ownership calc on 800$ kids bike and it nets out to around 120-140$ a year for two years for a sweet bike. Unfortunately that's peanuts in the MTB world. Most guys spend that in tires and sealant alone. Again, if kids are newer to the sport...I'm HUGE fan of BMX freestyle bikes for kids. They are way cheaper and absolutely require proper riding position and skill. No BS sitting and pedaling around on an Isla road bike (their highend hardtail was sick). As my kids say "Sittings for old people...and crashing". The BMX fixes that quick for kids and turns them into skilled pilots.

dirtpedaler (Sep 22, 2020 at 10:50)
Did you check out the Big White Grom Slopestyle? That should answer your question. When we went 24 we sold off the 20 hardtail and my kid misses it. Got him an 18 bmx to replace it and he can ride 26 dj so thinking 24's on the DJ temporarily if needed. Got it pretty covered with 24 DH and HT, 18 bmx, 26 DJ is waiting for him. Only problem now is his current obsession is tricks at the trampoline park, sticking double twisting back flips, and I'm nervous about him wanting to try this stuff on the bike. Still need to find a tramp bike.

I saw Big White but hard to see the height of kids and so many of those older kids are tiny. Gets confusing. Good luck on the Tramp bike lol. The one company that made a sick one is out of business. Time to get the duck tape and foam out (we are going this route). Safer to tramp bike than slaying big on the trail at least.

dirtpedaler (Sep 22, 2020 at 13:20)
@Svinyard: I have one of those tiny kids, he's 10 and maybe 4'4" if you include his hair. I was really surprised to see those kids going big on 20" DJ bikes. Honestly I do get concerned about potential consequences to young childrens bones/bodies from hard impact landings.

juanny (Sep 22, 2020 at 14:01)
@Svinyard: my small sparrow weight 8yo (#2) is on a small 24" vpace Danny. He's not got a freestyle BMX background so no 369s etc but it's super light and he can move it about super easy.
There's nothing lighter out there off the shelf but my 10yr olds frame up custom spawn kotori v1 24 is lighter...but bigger due to the Durin SL and crest wheels.
Chromag may have a 20"dj coming. Heavy though.

Svinyard (Sep 22, 2020 at 9:49)
An ex-pro freeride buddy I know has a rigid 24" DJ that he slays on. He freaking loves that thing. Its more versatile for mortals not sending huge lines. It works really well at BMX parks as well. I wonder what a 24" BMX cruiser would look like with a 24" fork lol.

Sshredder (Sep 22, 2020 at 9:55)
Get those kids on the pump tracks and Dirt Jumping. Cool part when they grow out of this bike it will have a terrific resale value ready for the next generation of shredders .

Svinyard (Sep 22, 2020 at 11:12)
It's by far better for kids development than just bumping down the trails. This why the BMX kids are so dang good. Their program is strong and entirely dev focused rather than general trail riding.