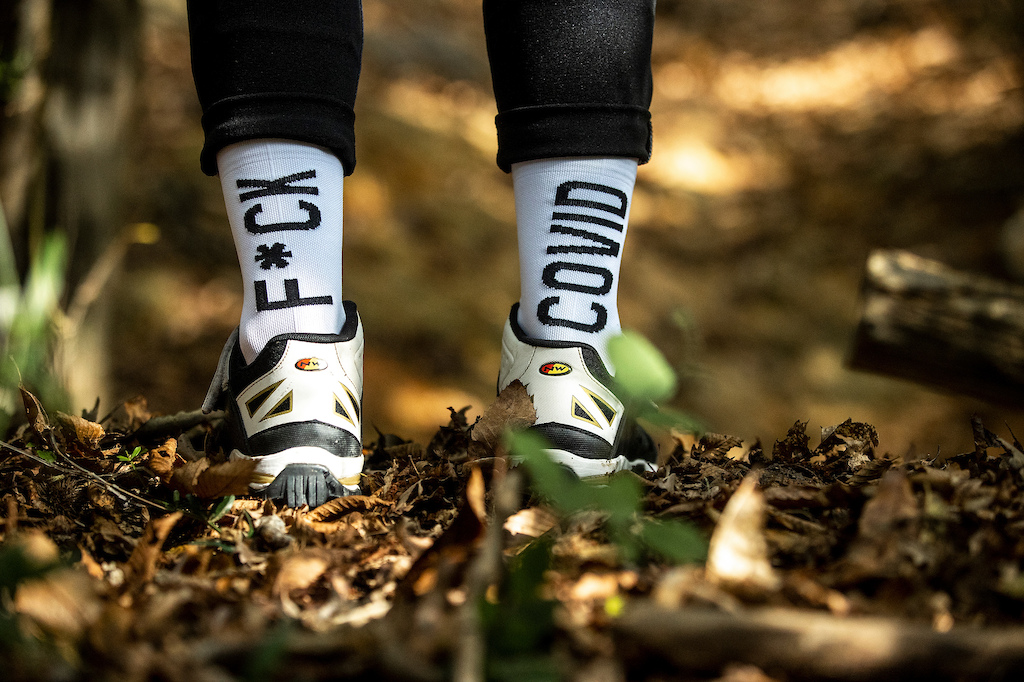 Take a look back at a season like no other through these photos of all our best moments!

The 2020 season will go down in history, and not necessarily for the reasons we might have imagined at the start of the year. The challenging environment brought about by the Covid-19 pandemic greatly affected the season for our athletes, and all on the circuit. From March, when the DH World Cup and Enduro World Series rounds were cancelled one after the other, everyone thought that there would simply be no 2020 season. Finally, there was eventually an unprecedented short season where riders had to completely adapt to a very different program. 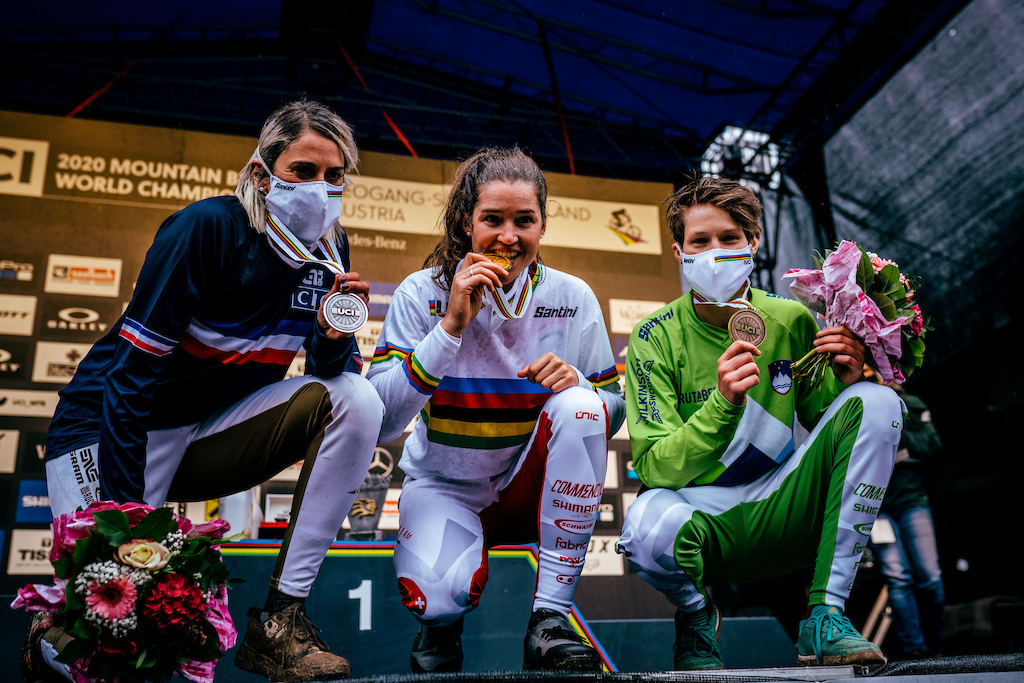 Held in Austria in October and therefore featuring dire weather conditions, the DH World Championships still came up trumps. After days of everyone slipping and sliding around, it wasn't until Sunday morning that the organisation were sure that they could even run the final. Snow was forecast for Saturday night and Sunday morning (race day) and apparently a track clearing team were on call through the night, just in case. Eventually, even with the cold, rain and fog (and actually some snowfall during Remi Thirion’s race run…), the final was able to take place on this unpredictable track.

When all the favourites fell, Camille Balanche stayed on her bike showing true skill, being one of the few out of the entire field who managed to keep her (Swiss) kit clean. She became the Women's DH World Champion as a result, a year after her European title! 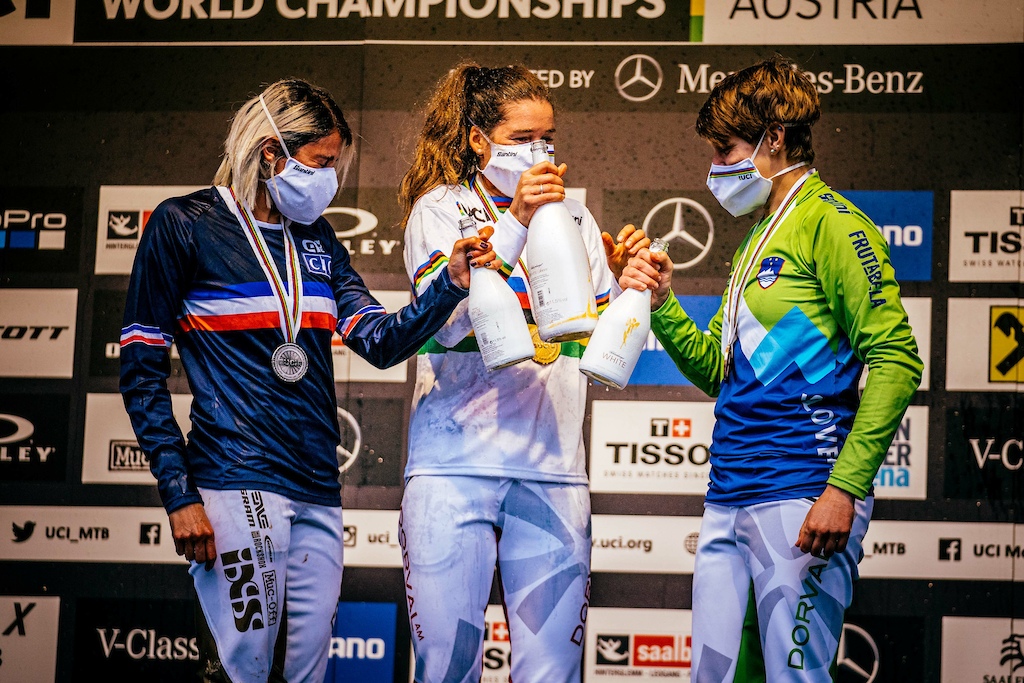 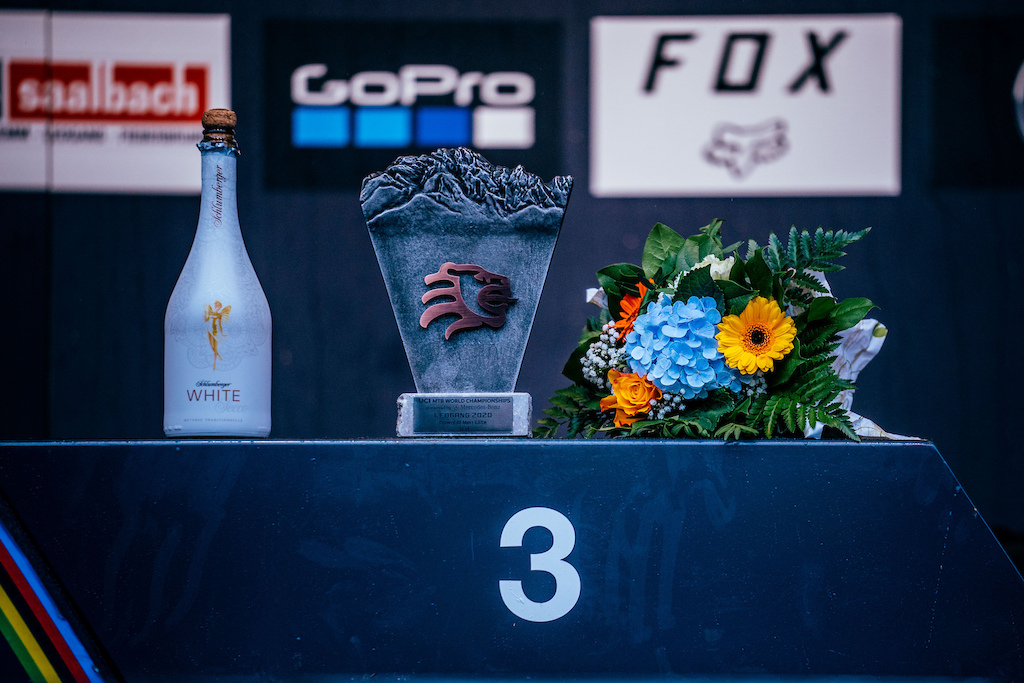 Three Commencal riders taking the three top spots at the World Championships! We feel immensely proud and we hope this illustrates our dedication to women's sport, with all our awesome champions from the past who have ridden our bikes, legends Anne-Caroline Chausson, Cécile Ravanel and Rachel Atherton... 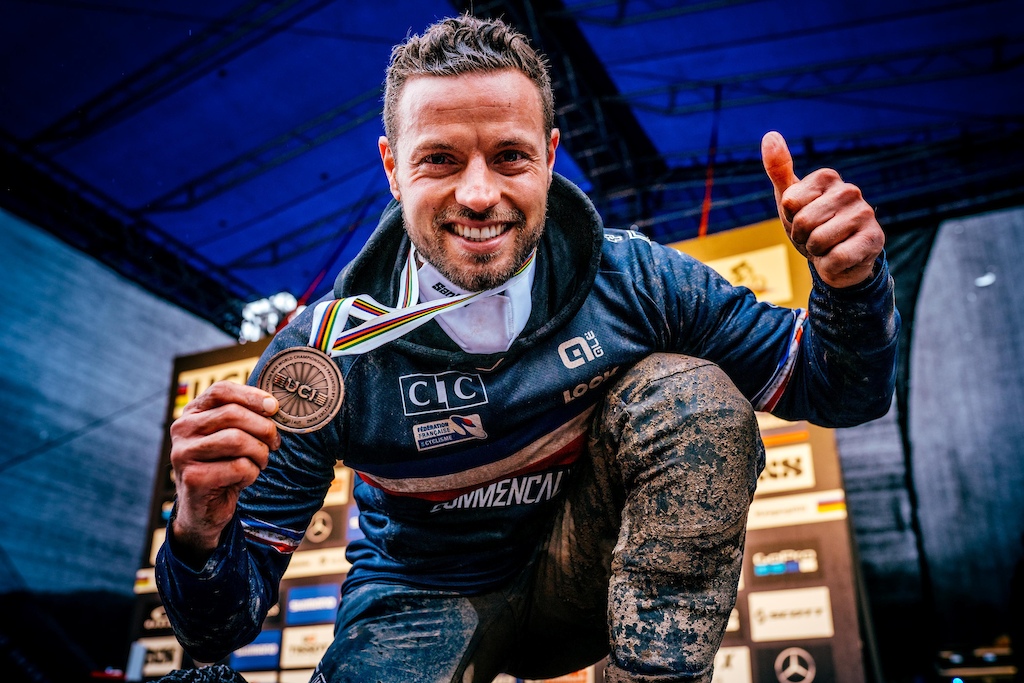 With a World Cup victory in 2013 but then a serious injury in 2017 which kept him away from the sport for a long while, Remi Thirion has had a few long months of struggle in order to return to his best. His steely grit and determination kept him going and he finally did it! The rider from Les Vosges has shown on many occasions that he is one of the most comfortable and technically capable riders on the planet (whilst also bringing heaps of style) and especially in conditions as difficult as those experienced in Leogang. A magnificent and already historic run (proven by the video which went viral of him ‘rodeoing’ the most difficult part of the track) saw him win his first bronze medal at a World Championships! Well done Mitch! 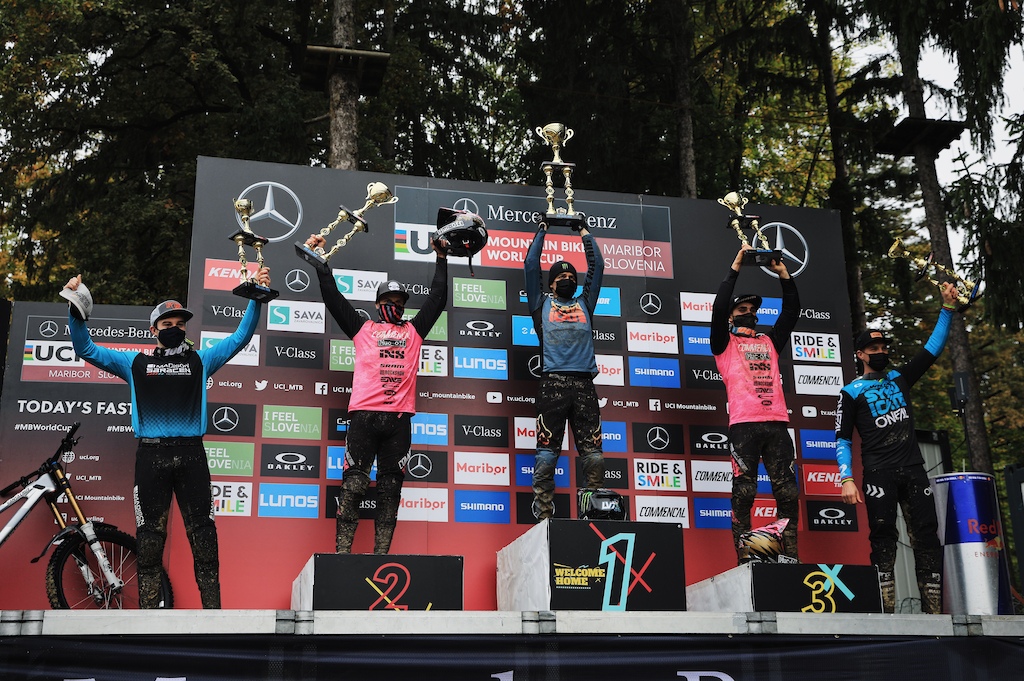 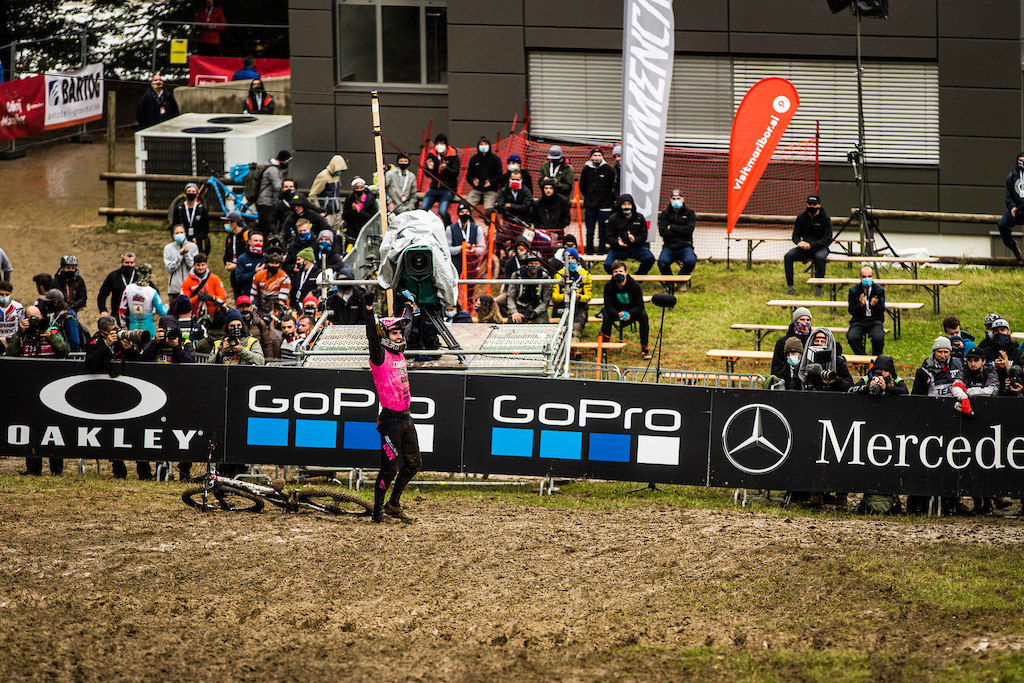 He said it himself last March following his knee injury that he wasn’t aiming higher than the top 15 in the World Cup this year. So, for his first season in the Men's Elite field, Thibaut Daprela very quickly outdid himself with several top 10 finishes including 3rd in Maribor and a 5th place and magnificent podium in the Elite Men's World Cup overall.

These are huge performances which already confirm he’s comfortable and capable at the highest level! 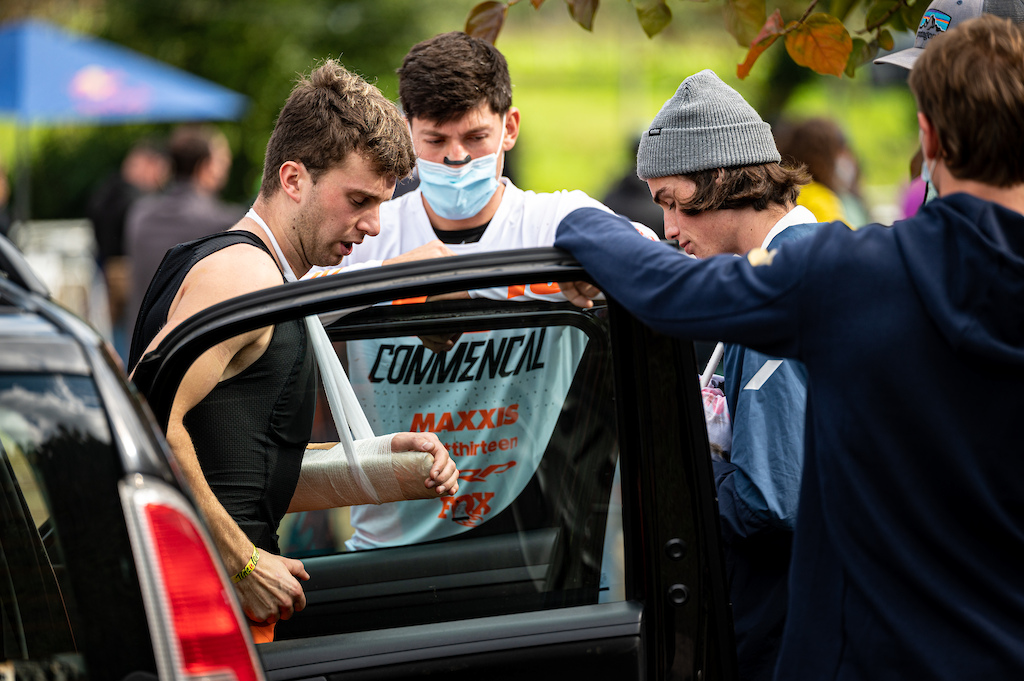 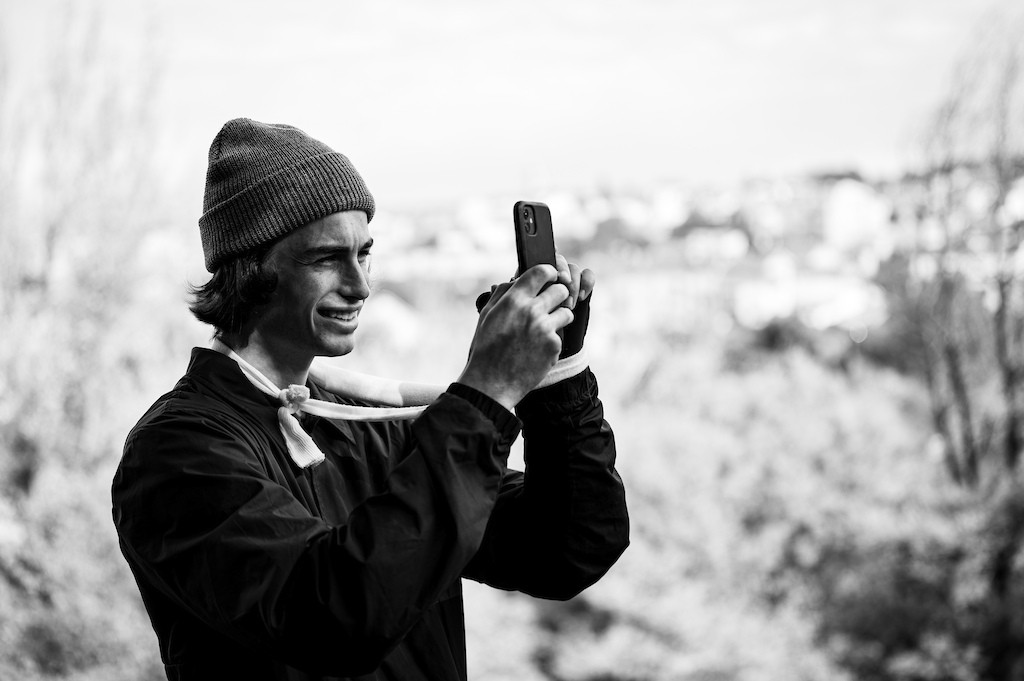 For Thomas Estaque and Hugo Frixtalon, the season turned out to be more complicated. The two friends and teammates on the Commencal 100% Team were unable to finish off the DH World Cup season due to injury. Hugo suffered a broken wrist after a heavy fall in Maribor, whilst Thomas also suffered a wrist injury with a painful dislocation and two torn ligaments. 2020, a difficult year... Bring on 2021 for them!

Their teammate Greg Williamson however, kept the team dream alive with a couple of excellent top 10 finishes in his first season riding the Supreme 29. 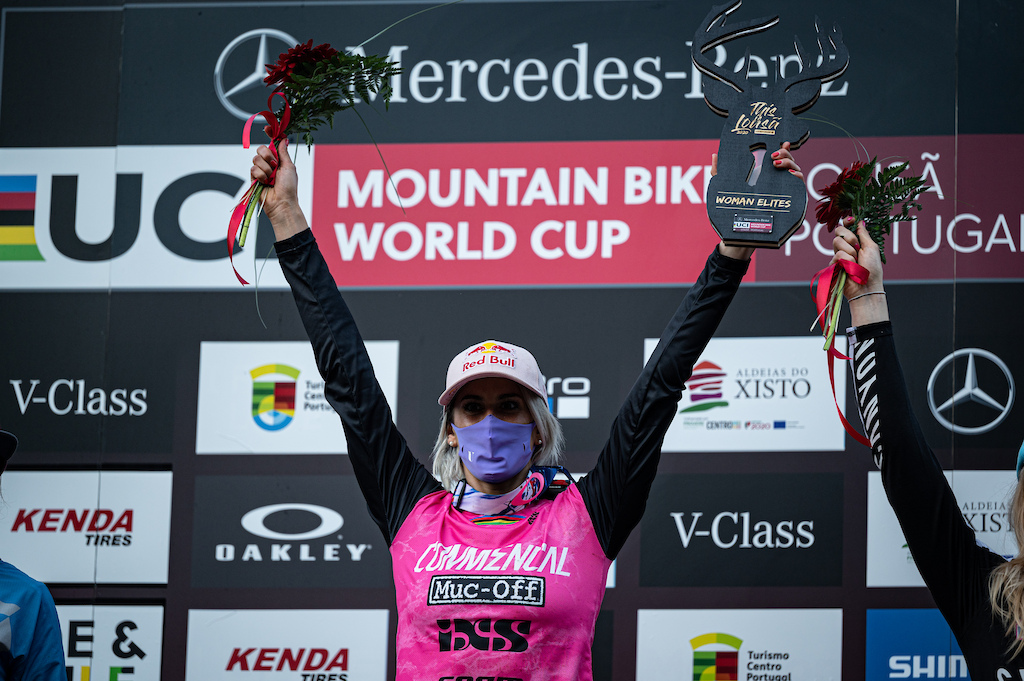 Like Rémi Thirion with his injury in 2017, Myriam Nicole suffered a serious foot injury in 2019 that kept her off the race track for almost a whole season. In Lousã, the Commencal Muc-Off Team rider won her first World Cup since Lošinj in 2018! A very well-deserved victory for Pomp, a year after earning the right to wear the rainbow stripes forever by becoming World Champion. 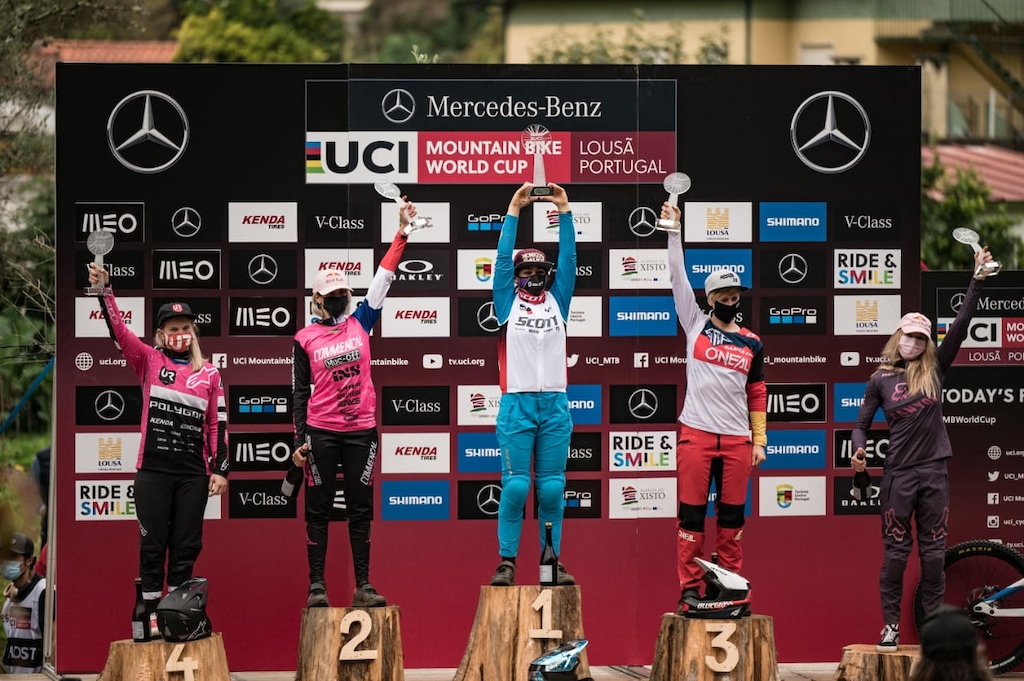 However, her 4th place finish in the final round and a win from Marine Cabirou saw her end the season in 2nd overall. A blow for Pompon after her silver medal at the World Championships. She will admit herself that she just didn’t take enough risks during her final run… But she is a fighter and her dedication will mean she’ll be even more ready in 2021! 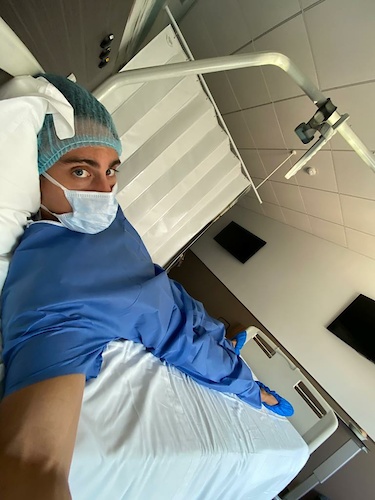 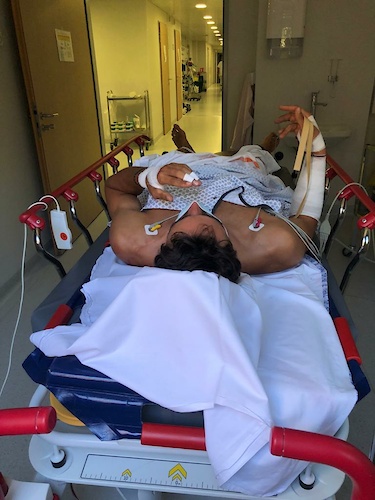 Competing in the French National Champs back in August, Amaury Pierron had a terrible fall during his race run. The consequences; fractured clavicle, dislocated finger and notably, fractures of the L2 and L3 transverse process of the vertebrae… A good six weeks in bed meant that obviously the season was over and no World Cups or World Champs for Momo. A real blow for him, the French team, the Muc-Off team and of course, his many fans!

For sure, he had a hard time following his World Cup teammates from in front of the TV but today things are looking up and he can get on his bike again! We’re glad to report that he’s more motivated than ever for the 2021 season and we cannot wait to see him at the races again. 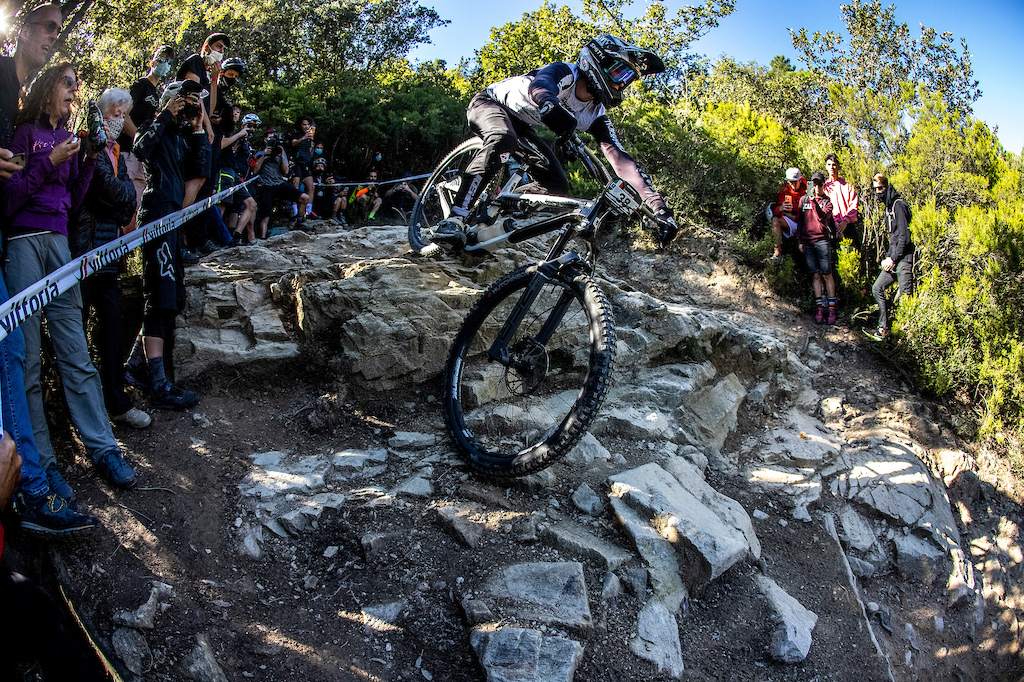 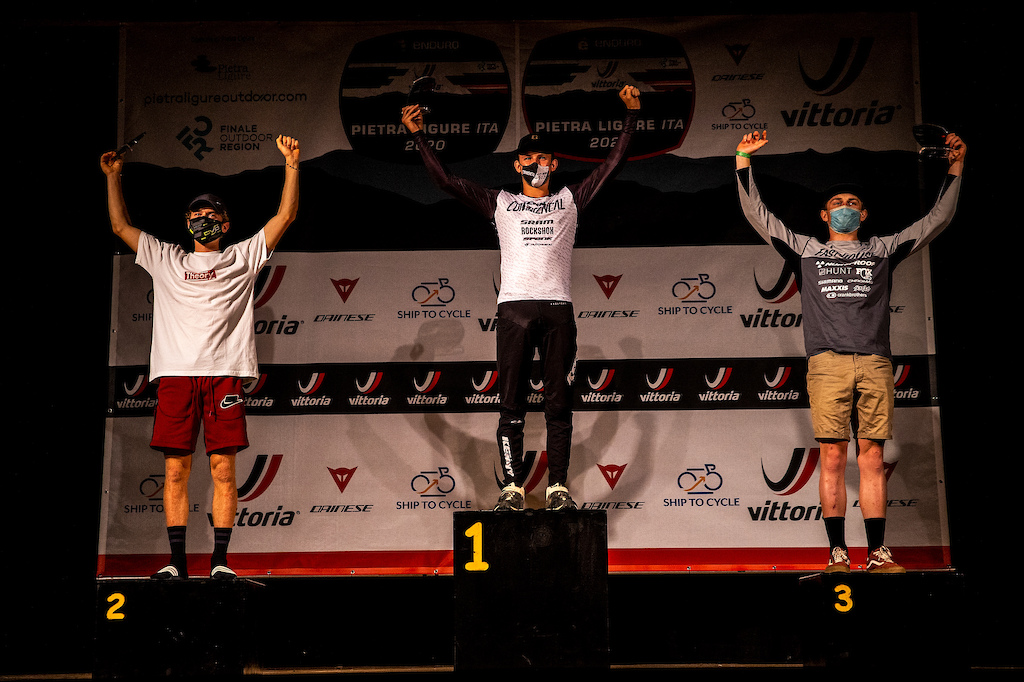 After crushing the competition last year in the U21 Enduro World Series, Antoine Vidal has once again had a great year despite the short season.

With two victories in two races in Pietra Ligure and Zermatt, Antoine even had the luxury of racing amongst the Elites for the last round in Finale Ligure! He finished 18th scratch, and in particular he took the 6th fastest time twice on two separate stages. Once again, superb performances and we have to count on him to do more great things next season! 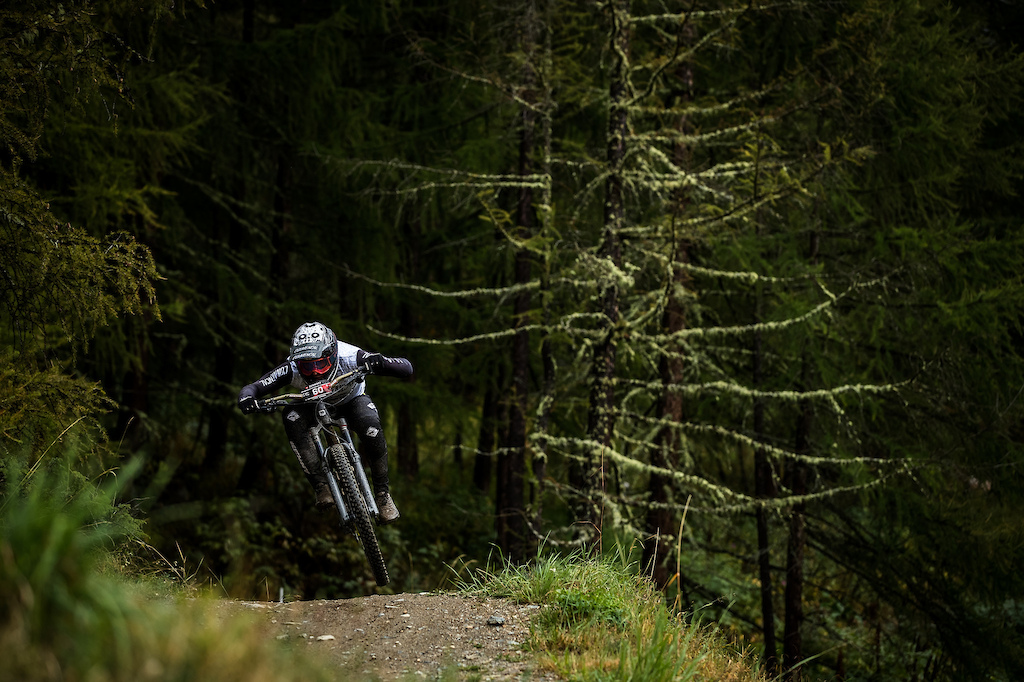 Alex Rudeau took part in Zermatt in his 4th career Enduro World Series in the Elite category. The young rider looked very comfortable on his new META AM 29 with an 11th place overall, including a superb 5th fastest time on the second stage.

A great performance which shows him as the underdog to look out for next season in the EWS competition! 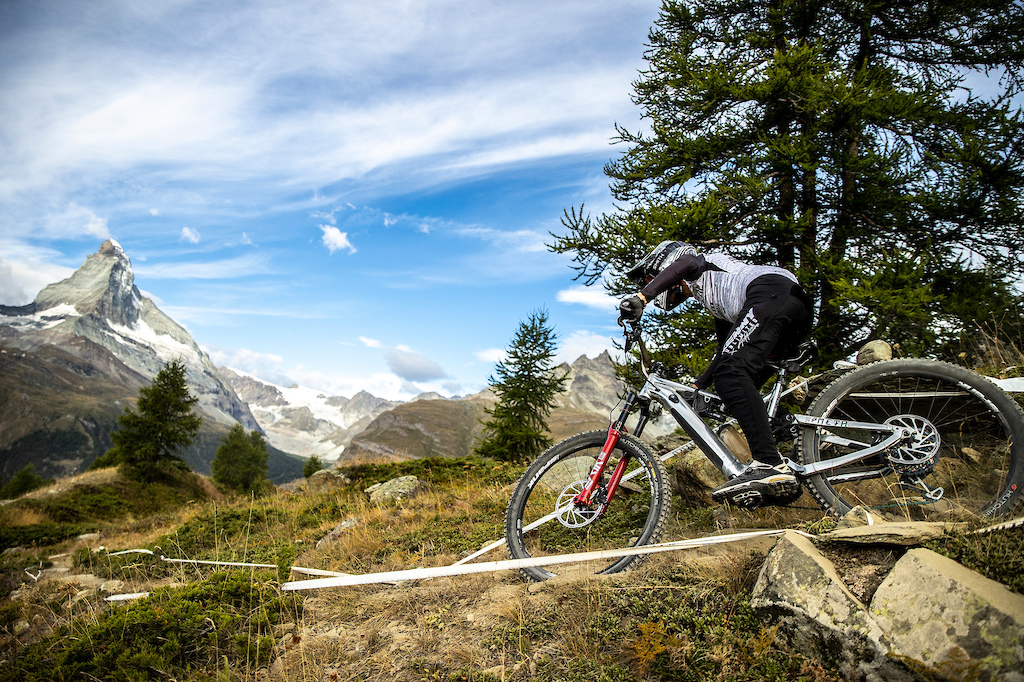 Even if it all didn’t go quite as planned in 2020 (that's 2020 life!) Cédric and our engineers have a common desire to progress in this area and to fight for some wins from next season onwards! 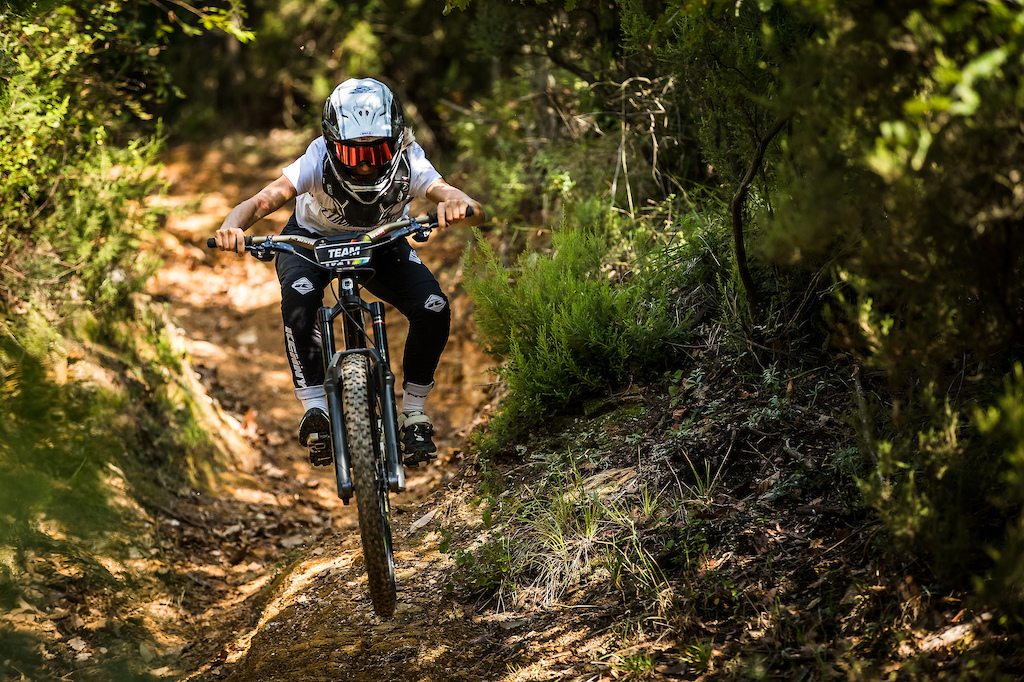 After her serious injury last year, Cécile Ravanel chose not to participate in the EWS this season. Whilst we miss seeing her on the podium, she’s assured us that she’s enjoyed discovering a new role as coach within her team. You can read more about that here.

It’s a position which seems to suit her perfectly given the team's results and it allows her to travel to races alongside her teammates. Judging by this photo she hasn't lost any skills behind the bars of her Meta AM 29! 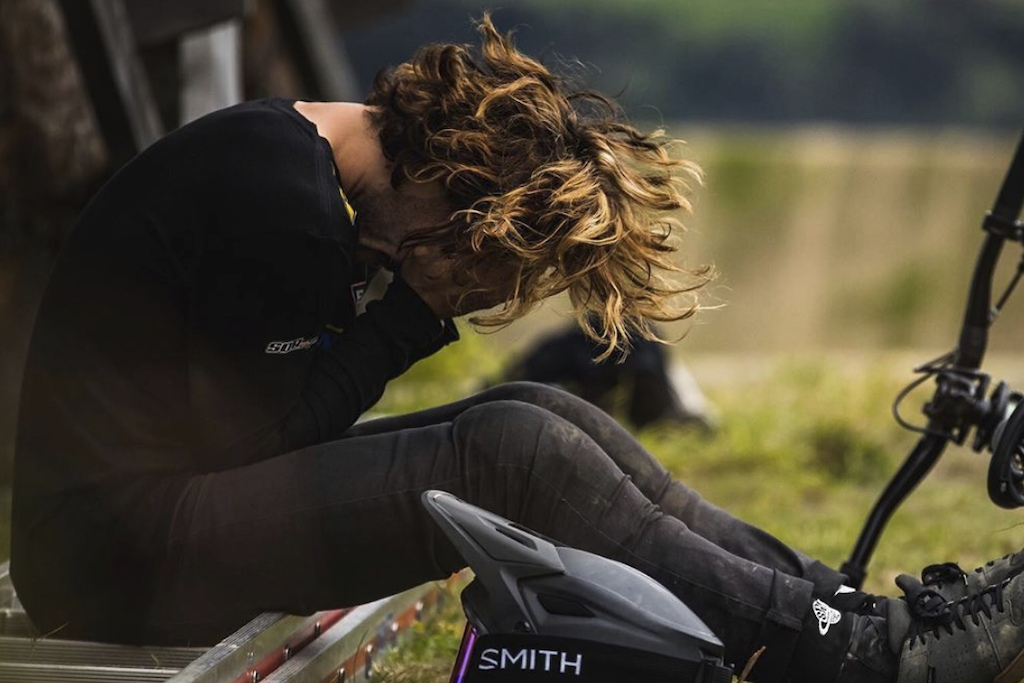 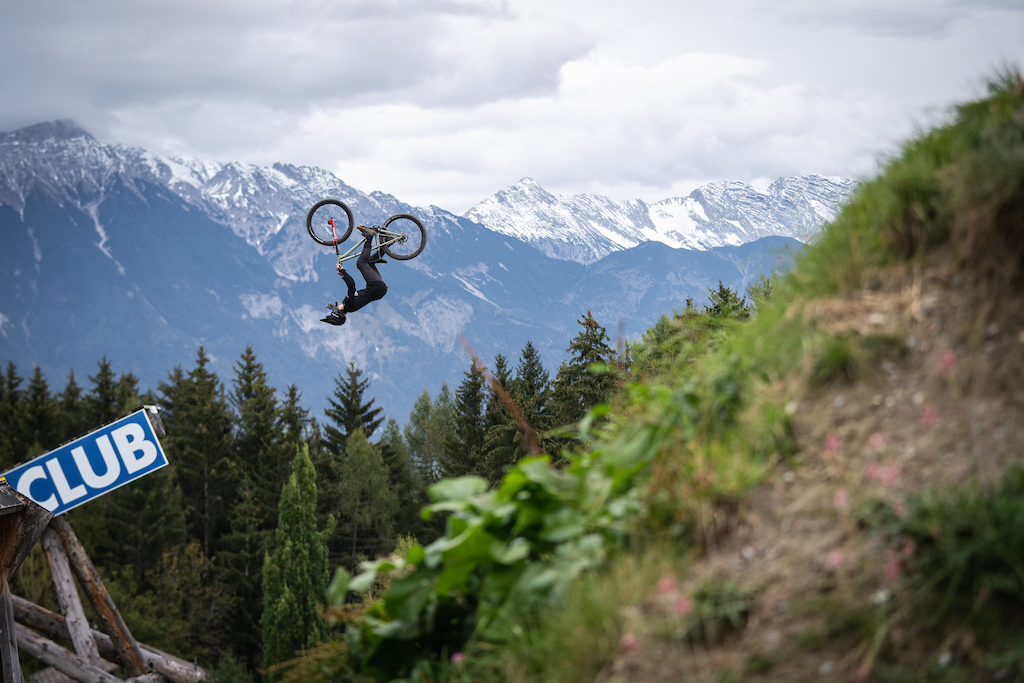 Once again, Paul Couderc took part in Crankworx Slopestyle, the most recognised competition in the world for this discipline. And all the more important for him this year since it was the only Slopestyle competition available to enter.

Paul works hard and pushes boundaries throughout the year to achieve his goals, as his 'My War' video shows. Unfortunately for him, at Crankworx Innsbruck he crashed in his two final runs… It can happen so easily in this crazy sport!

Another Slopestyler Tim Bringer participated in his first-ever Crankworx this year. After the Rotorua round, he arrived in Innsbruck with little pressure and provided a great show on the Austrian course. In each of his runs he tried everything, for better or for worse… His rear wheel sure felt the brunt! 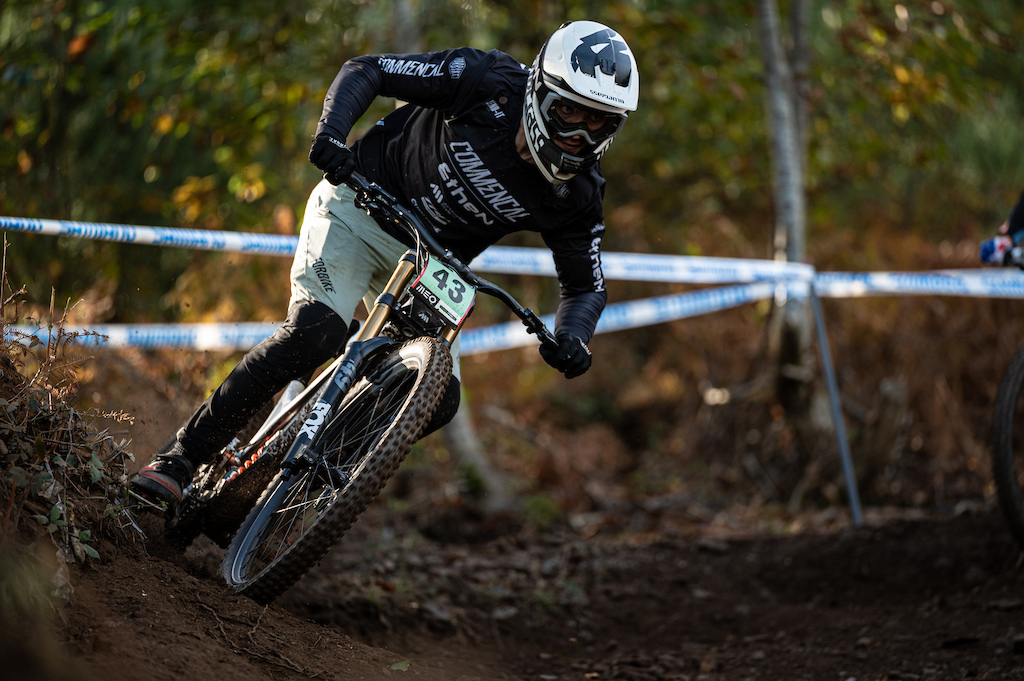 Like with the Commencal Junior Cartel, we have always helped and supported young riders. Our goal is to aid them in reaching the top level of the world circuit, a rider like Thibaut Daprela is an excellent example.

This season, it was Spaniard Pau Menoyo and Englishman Dan Slack who shone in the Junior DH category. Pau took a wonderful 2nd place at the 3rd World Cup in Lousã, whilst Dan won the silver medal at World Championships and achieved two World Cup podiums taking a superb 5th place in the overall! They are the young guns to watch in the coming seasons! 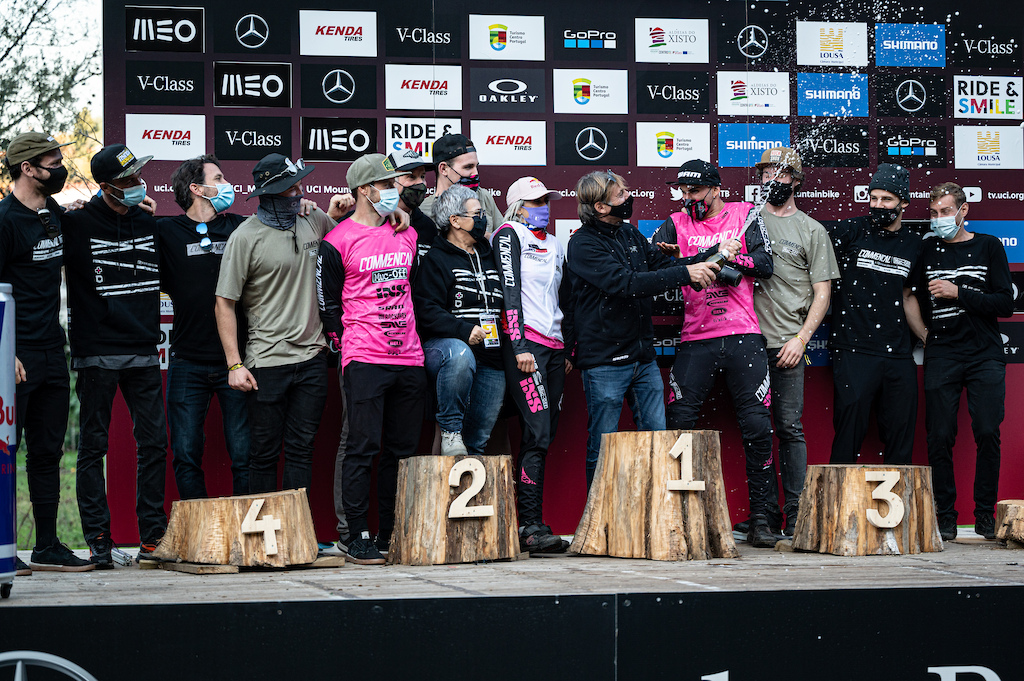 During the 3rd World Cup in Lousã, with Myriam Nicole’s win and her return to the forefront in the overall competition, plus Daprela and Thirion’s great results, the Commencal Muc-Off Team won the Team of the Day accolade! Always great moments to share together. 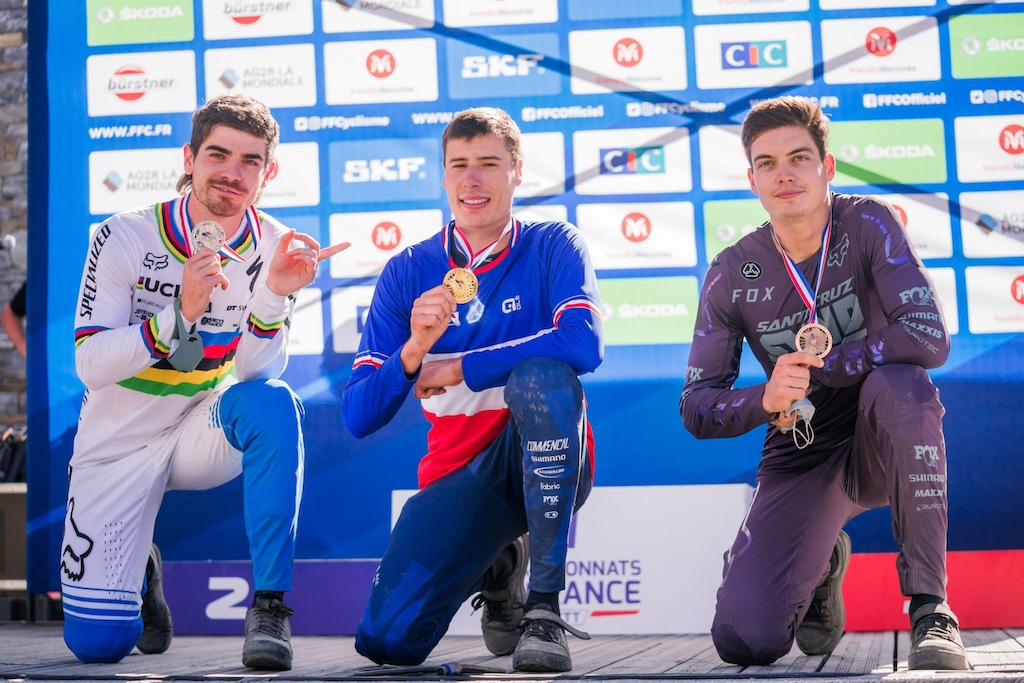 After training all summer in Morzine and going on to win a French Cup, Benoît Coulanges impressed everyone by pulling a storming run out of the bag at the French National Championships in Les Ménuires! He beat some of the best riders in the world to take the sleeve, including Loic Bruni, Loris Vergier, Rémi Thirion and Thibault Daprela.


For everyone across all disciplines, the 2020 season is now over. Thanks to each and every one of these athletes for creating such intense memories and emotions. For some, now is the time to rest and recuperate from injuries. Others are already working hard to prepare for next season, which we hope will be complete... See you in March 2021 for the Enduro World Series and April for the return of the DH World Cup!

deadflat (Nov 14, 2020 at 10:26)
Is Loic sporting a mullet in that podium pic from the French National Championships?

kdiff (Nov 16, 2020 at 9:49)
@COMMENCALbicycles - Your post race videos are the best. 2018 videos and earlier were very good. The 2019 videos (especially Fort William and Leogang) were phenomenal!! I still watch them when I need some good mtb videos. The Remi X Morgins video from a few months ago is another great one. Speaking of Remi, its cool to see him back at the top. I admire the French dedication and love for the sport of biking, especially mtb. Looking forward to hopefully a normal '21 race season and the Commencal racers crushing it.

Linkpin (Nov 14, 2020 at 23:58)
Considering his results and the press he's generated that's a pretty fleeting mention of Greg Williamson there. Cool write up, though - makes a nice change from videos to be able to read it yourself.

abueno (Nov 14, 2020 at 8:08)
Yea prolly has nothing to do with inflation and the market changes due to the global pandemic..surely you are right...