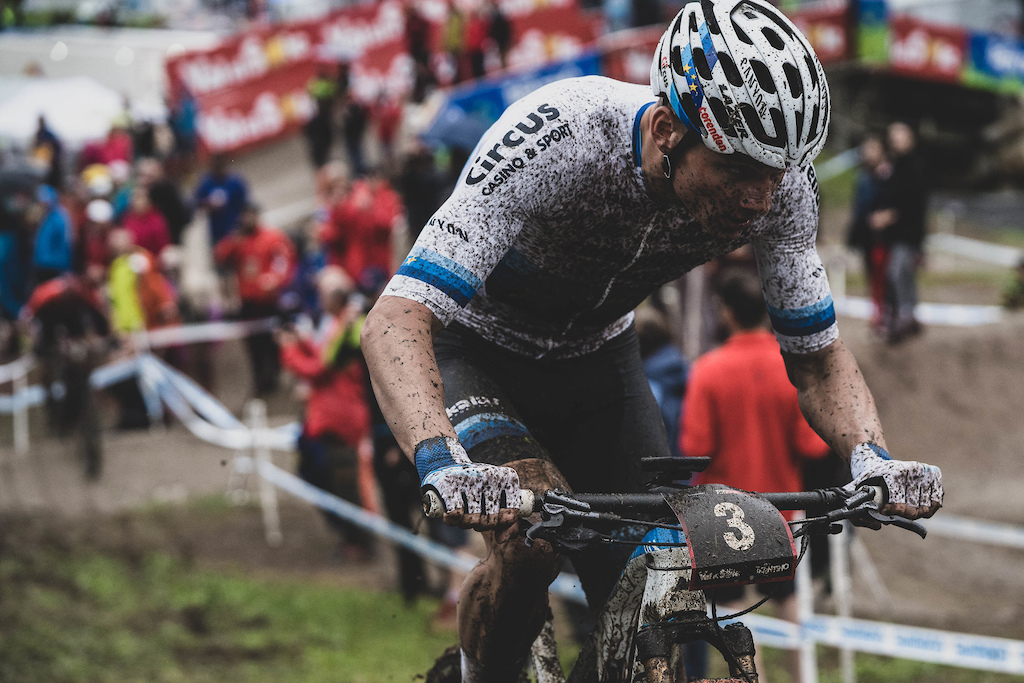 Mathieu Van Der Poel's Cornedon Circus team has today announced it will be rebranded as Alpecin Fenix and that it has signed Kiwi racer Sam Gaze.

The team will continue to race on Canyon bikes and they will also continue to be multi-disciplinary, racing in mtb, cyclocross and on the road. The team has already enjoyed its first taste of success as both Ceylin del Carmen Alvarado and Mathieu van der Poel picked up wins at the cyclocross GP Sven Nys yesterday. From what we can tell from pictures of that event, the team will now be wearing navy blue kit as opposed to the white, orange and blue of Corendon Circus.

The press release also confirms that Sam Gaze has moved over to the team from Specialized. Gaze wil be focussing predominantly on cross country racing and no doubt keen to return to his winning form of 2018.

Despite his continuing success in cyclocross and on the road, the team confirmed that Van Der Poel's main target for 2020 is Olympics mtb gold in Tokyo.

A name change for 2020 but still a collaboration with Canyon Bicycles. Alpecin-Fenix is the new name of the multidisciplinary team led by brothers Philip and Christoph Roodhooft, featuring Mathieu Van Der Poel and competing with a UCI Pro Continental license.

Mathieu van der Poel will lead Alpecin-Fenix across the board, competing in cyclocross, road racing and cross-country mountain bike racing. Mathieu van der Poel's #1 objective for the 2020 season is the Gold Medal in the XCO bike race at the Olympic Games in Tokyo. Roman Arnold, founder and managing director of Canyon Bicycles GmbH, explained “We are really pleased to continue our collaboration with Alpecin-Fenix as bike sponsor and partner. Since the beginning, we have believed in Philip and Christoph Roodhooft's vision to create a multi-disciplinary team that can be competitive in more than one discipline. And having the incomparable Mathieu van der Poel racing Canyon Bicycles on and off road and in cyclocross is simply unbelievable.  We've enjoyed an incredible number of wins in all categories with this team, so we can't wait for the season to begin for Alpecin-Fenix!”

Besides van der Poel, Alpecin-Fenix will feature many other world-class cyclists in 2020 including cyclocross star Ceylin del Carmen Alvarado and cross-country mountain bike riders Sam Gaze and Ronja Eibl. For road racing, prolific Italian sprinter Sascha Modolo will join Alpecin-Fenix for results in both the spring classics and the large tours. Belgian champion Tim Merlier is back for more wins in 2020 while Danish track specialist Lasse Norman Hansen is an emerging force in road racing. Alpecin-Fenix will include a solid German contingent, with Alexander Krieger joining the reigning German CX champion Marcel Meisen and experienced Philipp Walsleben (former U23 cyclocross world champion).

Team Alpecin-Fenix will race on road with the Canyon Aeroad, Ultimate and Speedmax. In mountain bike, the team can choose the Canyon Lux full-suspension race bike or the hardtail Canyon Exceed for cross-country events. The Canyon Inflite is the bike of choice for cyclocross and Canyon Grail for gravel racing.

martinaasa (Jan 2, 2020 at 3:12)
Definitely looking forward to seeing MVDP battle it out with Wout Van Aert in the spring classics.

PapaStone (Jan 2, 2020 at 4:36)
If Sam Gaze can get back to top form, who will lead out the sprint in the Short Track MTB race, Sam or MvdP? It seems like they will be battling each other for that discipline.

GatoGordo (Jan 2, 2020 at 7:00)
You think Gaze is as good as MvDP? Gaze should already know who the real star and winner of that team which is MvDP.

vinay (Jan 2, 2020 at 12:07) (Below Threshold)
@jonnyboy: Chances are slim he'd be running the same axle standard, wheelsize, rotor size and cassette spacing with all these standards we have these days. If the chain and cassette are even worn in an equal amount. Are they the same weight so that they actually run compatible tire pressures and tire insert hardness gauges? Either give him the complete bike or don't bother at all.

Squamishboz (Jan 2, 2020 at 6:42)
This makes way more sense now. I was struggling to understand why MVP would sign with another pro conti team given that I’m sure just about any pro team would have found room in their budget for him.

racerfacer (Jan 2, 2020 at 7:59)
after Tokyo, MVDP needs to step up to the World Tour ASAP. Although I haven't crunched the numbers, but maybe doing Pro Conti with the odd World Tour race thrown in has kept his yearly racing kilometers reasonable and allowed him to be a triple threat?

Cadel rode for the biggest teams in the world (eventually).

fullfacemike (Jan 2, 2020 at 6:51)
Last line, "The Canyon Inflite is the bike of choice for cyclocross and Canyon Grail for gravel racing," confirms pro gravel is a thing. A thing MVDP can/will also dominate, but a thing nonetheless.

lucky13p0 (Jan 3, 2020 at 0:56)
MVDP is a complete rider, I hope he can achieve what no one ever did. He's a real winner. It's far from Tokyo but if he can win the gold medal he's my God. Then I buy his 4gold supplements. Strange name for supplements ;-). Happy new year everybody

cvoc (Jan 3, 2020 at 2:12)
Just to bitch about the spelling of his name: If you use his full name, you write 'van der' with lower case letters (so: Mathieu van der Poel). If you only use his last name, the 'van' is spelled with a capital (so: Van der Poel). This is sometimes done correctly in this article and sometimes done wrong (even in the press release from Canyon...).

vinay (Jan 5, 2020 at 12:23)
In an alphabetical list sorted by last name it would be "Poel, Mathieu van der". I forgive anyone who's getting this wrong. Heck, I'm not even sure whether I am correct here!

jtorrento (Jan 4, 2020 at 5:26)
A lot of comments around Gaze's arrogance so I'll note a story. In the moments after his short track win at mont st. anne in 2018 my son and I were near the podium and he walked straight from the podium away from the interviewer and asked my son what he thought of the race and his name and if he rides. It was pretty surreal. After a high five he went back to the (red bull?) interviewer and camera. I was impressed. That was not the move a self consumed man makes.

Augustus-G (Jan 4, 2020 at 14:31)
@jtorrento IMPO, Sam did a lot of growing up after the bird flipping incident and all of the backlash he deservedly received afterwards.

fullfacemike (Jan 2, 2020 at 8:22)
@jclnv: Doubtful; this team is kind of known for putting together a good roster. This time next year we can look back on Gaze's 2020 results but for right now I'll tell you Alpecin-Fenix knows a hell of a lot more about who has potential than anyone on Pinkbike.

jclnv (Jan 2, 2020 at 9:47)
@fullfacemike: Totally. They’ve seen his numbers or they wouldn’t sign him. But the real reason they signed Gaze is that MvdP will be off to road after the Olympic crap and Gaze is one of the only guys to beat Nino. That said, Gaze does come across as a bit full of himself and he probably thinks on paper he’ll be competitive with MvdP but I think he’ll get a shock when he sees how many repeat threshold efforts MvdP can put out. That’s where he’s on another level to almost anyone.

XCO wise think Lars Forster is going to be hard to beat this year.

Augustus-G (Jan 4, 2020 at 14:44)
I don't know. He still wasn't back in even remotely good form by the end of the 2019 season.
Head injuries like he suffered can have a life long impact both physically and mentally.
We know he has the potential to be very strong, especially in the XCC events.
IMPO, His weakness has always been his technical skills. If Nino is an "A", Sam's a "C" at best.
I have some doubts concerning his full recovery but hope they're misconceived.
We'll just have to wait and see.

magnusc (Jan 5, 2020 at 3:01)
@Augustus-G: Remembering the first XCO WC in 2017 when Sam beat Nino, Sam had no problem following Nino downhill. I would rather say Nino had trouble following Sam. Though I think most of the time Nino is riding safe to not fall or get punctures. Nino’s safe is almost as fast as everybody else's max or "a little over the top".

Augustus-G (Jan 6, 2020 at 19:43)
@magnusc: That was 2018 at Stellenbosch. 2017 was Nino's perfect season.
Stellenbosch had some really cool features but it wasn't a super technical course.
I hope Sam has made a full recovery and helps make the Men's side of the house as competitive as the Women's side but I still have my doubts. So we'll just have to see how things play out.

RoadRunner13 (Jan 7, 2020 at 1:23)
VDP will blow Schurter at the Olympics... If no mechanics or fueling problem (like the World Champs on the road, but different context), he'll just destroy Schurter.

Dustfarter (Jan 2, 2020 at 6:54)
Thankfully they chose a catchy team name that just rolls of the tongue this time.

PapaStone (Jan 3, 2020 at 7:58)
Not this year. He has a big road classics campaign planned for this spring.
Post a Comment