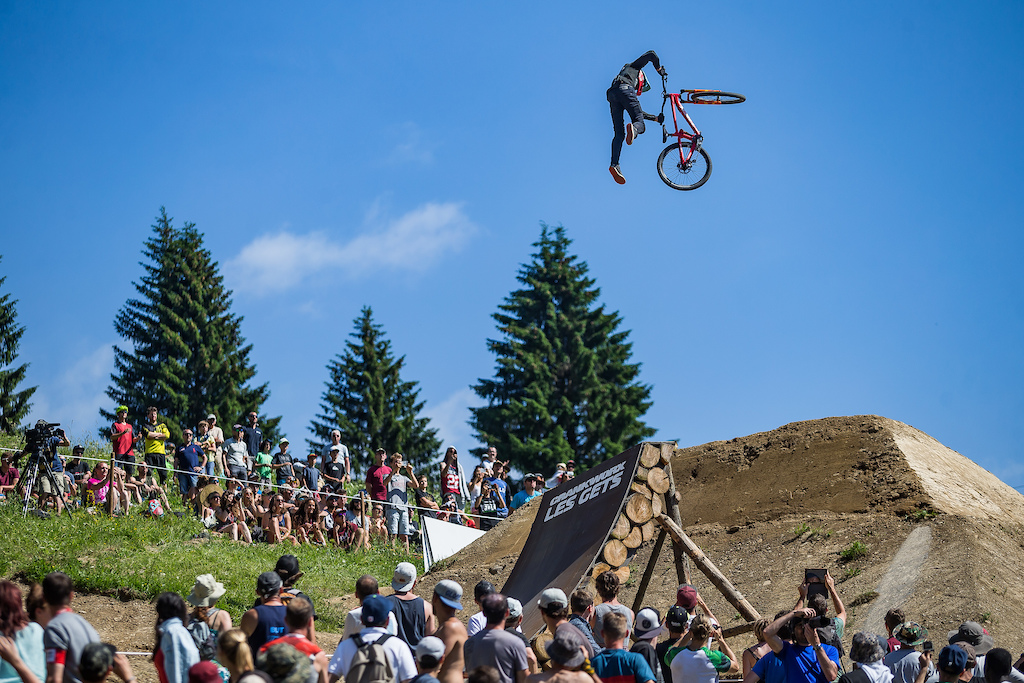 The Pinnacle of Slopestyle
Unified series takes Slopestyle to the next level
Brett Rheeder at the Crankworx Les Gets Slopestyle in France. His win in the event earns him the fifth pre-qualified spot in the 2018 SWC. Photo: Fraser Britton
The sport of Slopestyle mountain biking is entering a new era. TheCrankworx World Tour and the Freeride Mountain Bike Association (FMBA) are excited to be launching into the 2018 season in unison. Starting this year, there will now be one elite-level series of slopestyle mountain biking events. 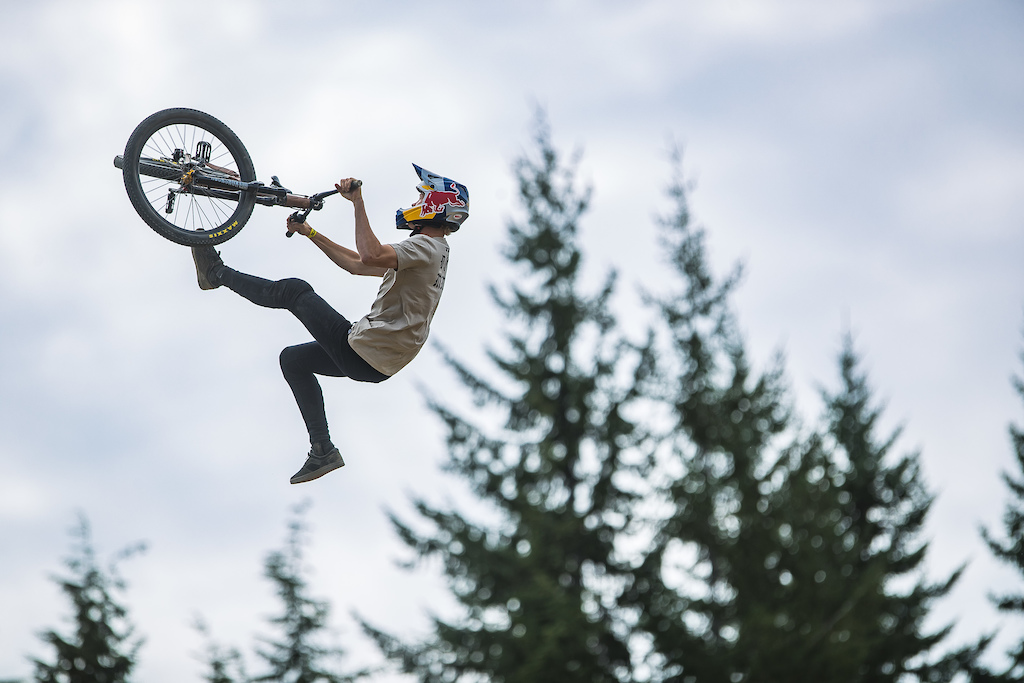 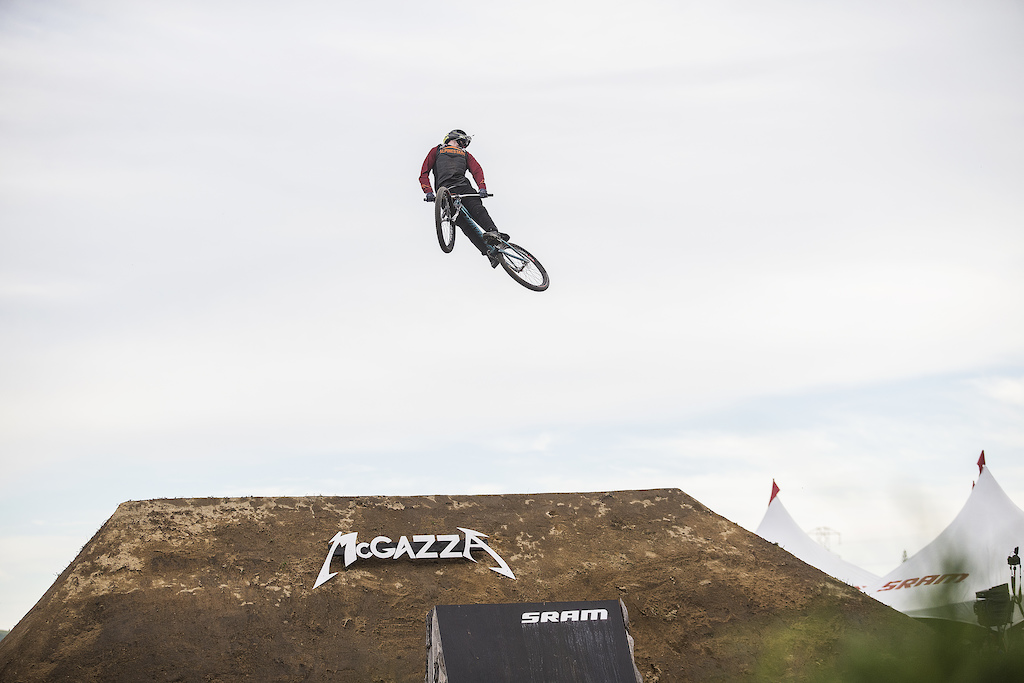 Based on his 2017 results, Emil Johansson (left) is the first pre-qualified rider for the 2018 SWC season, while Nicholi Rogatkin is second. Photos: Fraser Britton


The FMBA as the governing body of the sport will continue to operate the FMB World Tour, a classification system of events comprised of Bronze, Silver, Gold, and Diamond level events, and produce the FMB World Ranking through which young talent can break in and rise up to the SWC. In order to ensure riders can make the leap, the FMBA has remodelled the points system for Gold and Silver events, awarding more points at these contests. 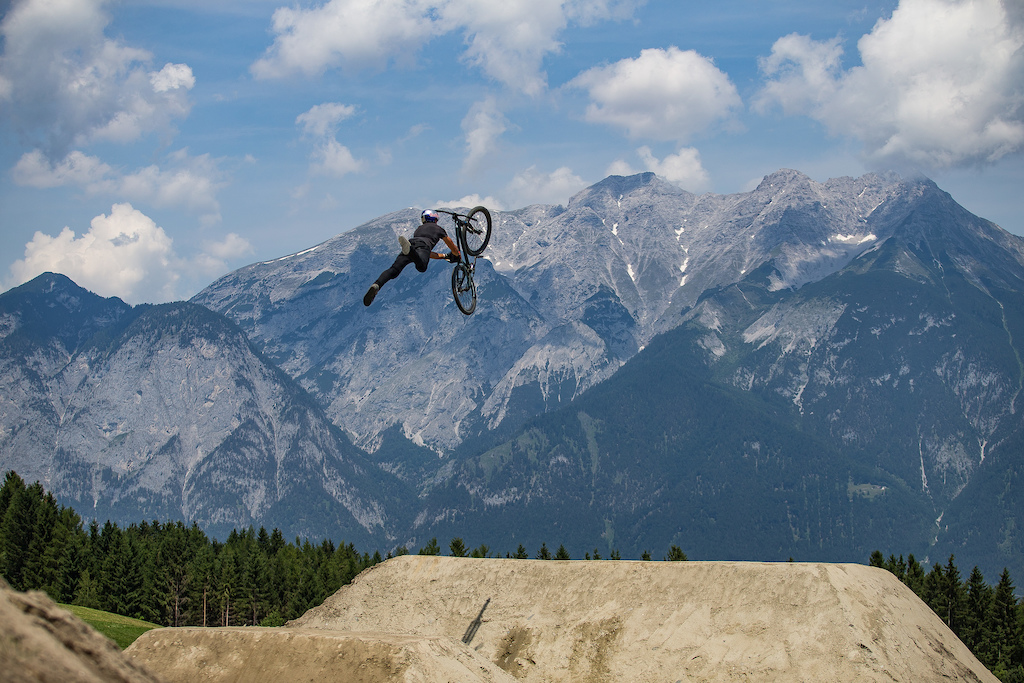 Szymon Godziek, flying high in practice for the Crankworx Innsbruck Slopestyle presented by Kenda. Godziek will be the third pre-qualified SWC rider in 2018. Photo: Fraser Britton
14 spots will now be up for grabs for SWC events. The top six riders according to the SWC Standings from the previous year automatically qualify for all SWC events. This year the top six riders from last year’s FMB Diamond Series will automatically qualify for the SWC’s premiere season. These six pre-qualified athletes will be joined by the next best six riders according to the FMB World Ranking six weeks before an SWC event. The two final spots will be awarded to FMB Wildcard entries who can win their spot on the start list by competing at designated FMB Gold events taking place before an SWC event. Additionally, winners of Red Bull Joyride, Slopestyle’s ultimate event, will be granted lifetime entry to SWC events.


The FMB World Tour is heading into its ninth season. A preliminary FMB World Tour Event Calendar covering the rest of the 2018 season is expected to be released soon.

The first Crankworx FMBA Slopestyle World Championship event of the season will be the Crankworx Rotorua Slopestyle in Memory of McGazza on Saturday, March 24, 2018 in New Zealand. 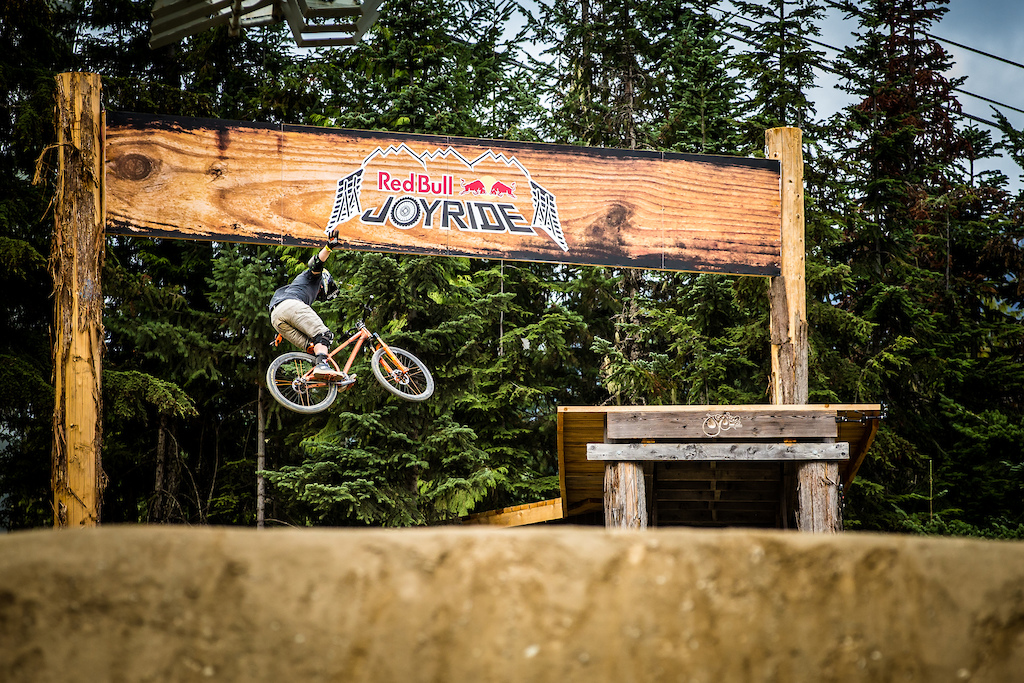 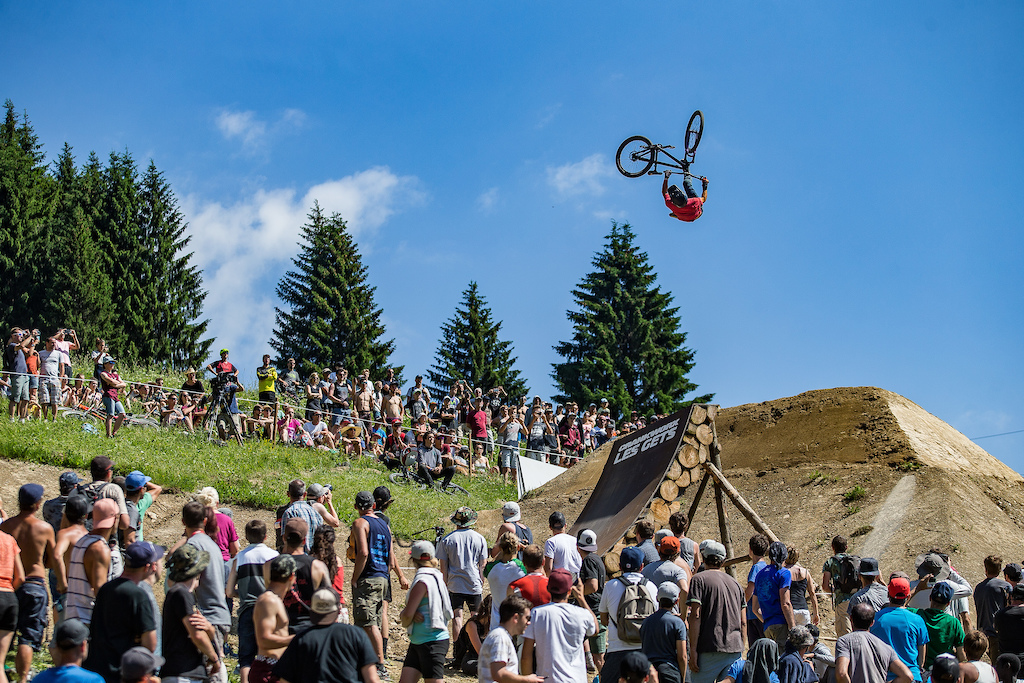 For more information on the changes to the FMB World Tour Ranking points leading up to the SWC, get the details here . Keep up to date on all the latest from the FMB World Ranking and Crankworx FMBA Slopestyle World Championship standings here.

talhaslam (Feb 8, 2018 at 8:22)
All I can say is $200k in total prize money is not enough for what these guys have to risk to win. Makes me wonder what the executives are making every year in salary to sit in an armchair and make decisions like these. If we want to see better competition, reward the riders.

taquitos (Feb 8, 2018 at 10:01)
It would be interesting to know what's going on behind the scenes as far as funding goes. In my mind the amount they make over their career (which can easily be cut shore by injuries) should be at least $3.2 million since this is what you'd make over a 40 year career making an average of $80k a year. This would included sponsorship deals and competitions of course.

dirtbiker327 (Feb 8, 2018 at 10:26)
@robito: what is fair pay for someone that rides their bikes for a living? It's not just competition winnings but a Redbull contract is like $30K a year plus bike sponsor, plus outer wear, plus googles, the top riders that are traveling to events are making pretty decent money. Top ten riders are probably pulling $100k+/year. The real thing that needs to be built into contracts is health insurance and disability as those guys are taking big risks which could keep them out of the game for a bit, and that is where things need to change.

clemson (Feb 8, 2018 at 10:35)
There is no real money in mountainbiking. Far to few outside sponsors with real budgets, no tv money ...so its gonna be b Paenuts compared to other sports .... its still a ninche sports

slickwilly1 (Feb 8, 2018 at 11:40)
Once people are willing to pay big $$$ to go watch these events, buy memerobilia at big $$$ or pay to watch all the free content we already get, maybe the riders will get paid more.. Its not like any if the big four sports where fans and corporate sponsorship enable the athletes to make big $$... Besides most of these guys would be pushing it on their bikes for fun if this wasnt their job...

talhaslam (Feb 8, 2018 at 12:09)
The fact is very few of us know how much money is actually flowing through the industry. It is definitely a niche sport, but I am willing to bet they could get creative to cut costs somewhere else and supplement the rider’s earnings. And you’re spot on about the health insurance thing.

bman33 (Feb 8, 2018 at 12:32)
@slickwilly1: Exactly. I keep hearing 'pay them more' or 'give them insurance'. Well, until what you say above comes true and we pay $$ to watch everything including Fest, Rampage, Crankworx, etc. and start paying crazy money for branded jerseys, and 25-60 thousand people pack the stands, we will still see only the top of the top make the 'real' money.

VwHarman (Feb 8, 2018 at 12:33)
@robito: the way to pay more is to get non-industry based sponsors. Mtb is a small market, especially something like slope. Frankly slope has a better chance than DH or Enduro to be a bigger money sport just based on its presentability to arc audience.

robito (Feb 8, 2018 at 12:39)
@dirtbiker327: I'm not sure to be honest. They don't have to make pro basketball money but they should be able to live pretty comfortable and be able to put some away. I guess they get paid in relation to the money they generate for the sponsors they represent.

Is a yearly sponsor from Redbull really $30k? That seems low too. And that's only for the top cream of the crop in our sport that get to wear that helmet.

The top snowboarders seem to be making a lot more. Can someone educate me on why that is?

dirtbiker327 (Feb 12, 2018 at 16:21)
I know some Monster contracts are $30k a year basing it off that probably like $50k for the top riders realistically but I was being conservative with my numbers.

taquitos (Feb 8, 2018 at 7:46)
"Additionally, winners of Red Bull Joyride, Slopestyle’s ultimate event, will be granted lifetime entry to SWC events." Semenuk wasn't in the pre-qualified list so they decided this I bet haha

only 2/4 of them are in europe

nscapital08 (Feb 8, 2018 at 8:41)
What about grassroot slopestyle events or series? Smaller courses to build on the next generation.

paulgenovese Plus (Feb 12, 2018 at 12:55)
That would be nice, a few years ago there was a bunch of bronze/silver/gold North American events such as Ranch Style, Teva Mountain Games, Claymore Challenge, Jump Ship, City 8 Slopestyle, Colorado Freeride Fest ect..they are literally ALL gone! I feel bad for the kids coming up in the sport right now from North America.

andrewgiesbrecht (Feb 8, 2018 at 10:19)
I'm still amazed that Diego Caverzasi still doesn't have a frame sponsor. He's got an awesome instagram page, and puts in consistent results at the biggest events. Somebody get him on a team!

Doesn't make sense to me either. There's tons of smaller companies that could get him on to an equipment only sponsorship. At least for the next 2 years. Talking about a dude that's gonna be in the top 10 of every event this year.

onemanarmy Plus (Feb 9, 2018 at 13:32)
@ryanme: I thought about that, but it doesn't really make any sense unless he's got something in the works with a big sponsor.

deco1 (Feb 8, 2018 at 13:09)
I'm under the impression that the main reason why the prize money is so low compared to other sports is probably completely down to television rights. I don't know if someone could possibly explain it to me but I assume that the crankworx broadcast which we see on foxsports in Australia is probably worth close to nothing as well as red bull probably paying almost nothing for slope style and world cups as they are only on an online platform.

Roonsk (Feb 8, 2018 at 13:26)
Very few are making “a living” at mountain biking. Especially slope athletes. For most it is done for the love of riding, adrenaline and the love of travel. For the risks they take they should make wayyyy more. A small ticket price to view these events would help if it went to the riders. Doubtful

theredbike (Feb 8, 2018 at 16:55)
These guys are taking advantage of the sport and steering it right in the trash