Join Pinkbike  Login
Unfortunately today didn’t start out so good for our good bud Joe Perrizo… the course opened and the riders started to practice for the best trick contest this afternoon and everything was great except for the wind. Joe ended up going for the last drop and got blown like a feather and landed very hard on his head and was out for about 3-5 minutes. After transporting him to the clinic/hospital up here in Winter Park, they wanted to get him down to Denver for a CT scan on his head to make sure nothing was messed up in there, and it seems pretty OK but he will have to stay for a couple days 'til they feel he is OK to go home.After I had left Joe at the hospital to be transported down to Denver, I got myself back up the course just in time for the Best Trick comp. There are 2 main jumps in the middle of the course that was going to be the first part of the comp, where riders would sesh those for 45 minutes and throw down their best lines. The second section of the comp would be the last drop feature and then after the riders would judge each other to crown the best rider of each section.

The first section started off pretty mellow with most riders chilling on the sideline thinking they should save themselves for the main event on Saturday, but after about 15 minutes the jam got underway and everyone took off their skirt and it was officially on! Andrew Taylor was throwing big tuck no handed flips and flip superman, Tyler McCaul was cleaning up with switch tailwhip to regular tailwhip, Graham Agassiz was doing massive cork flips, and Mitch Chubey did a big over rotated 3 off the first jump and blew up his rear wheel. But the competition really stepped up when Greg Watts flipped the first and flip whipped the second very clean first try! Mitch Chubey was scrambling to get his new rear wheel in his bike with only 10 minutes to go in the jam… he took one practice run through the jumps then trucked the first (360 bar spin) and flip whipped the last, but ended up not catching his feet as clean on the flip whip as Greg did, so in the end Greg Watts took the title for the first section and got $2000 for his efforts. 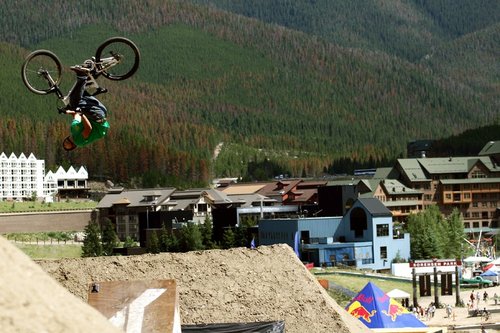 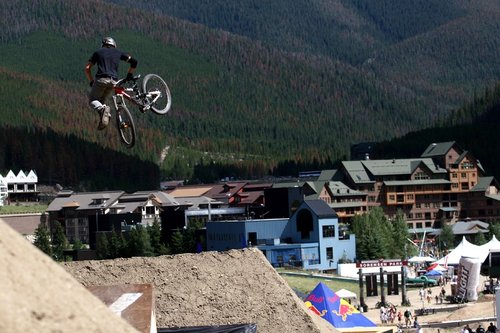 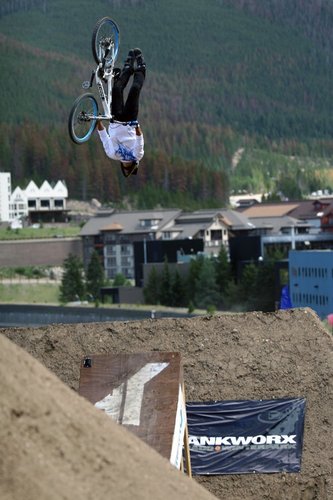 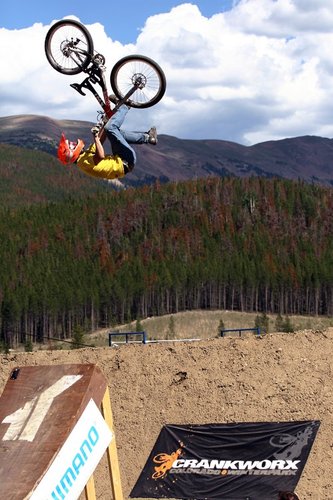 The second Section was the last 20 foot step down but it was very windy at the time so no one was really pumped on hitting it, especially after seeing what happened to Joe when he went off in the wind. After the first 5 minutes or so, the riders started to man up and hit it anyways… after all there was another $2000 to be won. After a couple dozen dead sailors from all the riders, Cam McCaul stepped up and flipped the step down. The crowd went nuts and so did the riders, where Andrew Taylor followed with another flip and then a flip table. After a couple more flips from Cam, he amped the crowd up in normal McCaul style and created MTB history with the first ever superman flip off a drop! Andrew Taylor followed it up with attempting to flip table the drop then up the step up box and tail whip the quarter and then 3 off the next step down, but was having a little trouble and fell about 6 times in a row. Tyler McCaul set up for the drop and did his first ever tailwhip off a drop which couldn’t have been cleaner and then Graham Agassiz did his first ever flip off the drop. In the end Andrew Taylor stuck his amazing line but Cam McCaul ended up taking the $2000 home because the contest was based on a single trick not a single line. 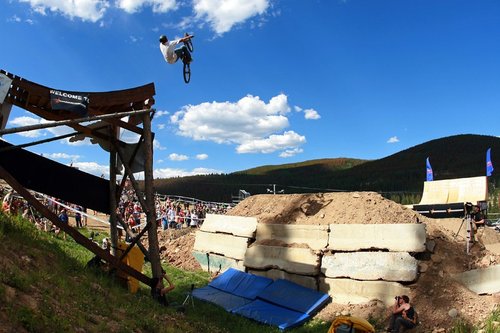 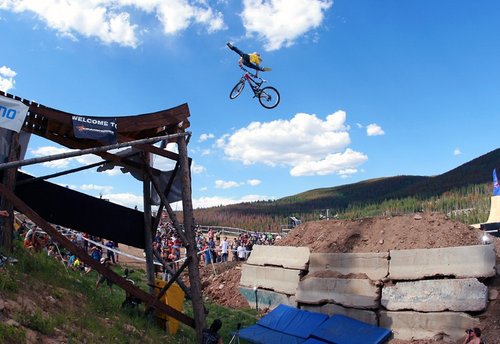 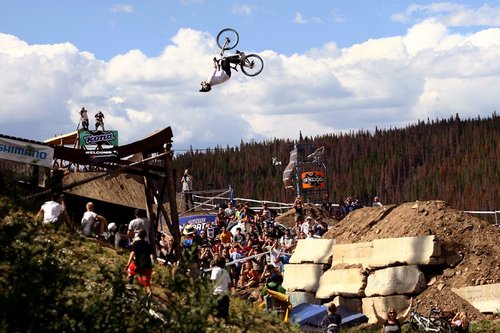 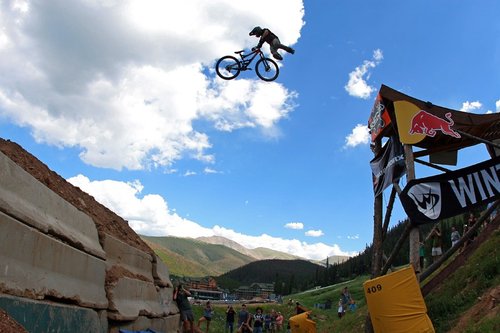 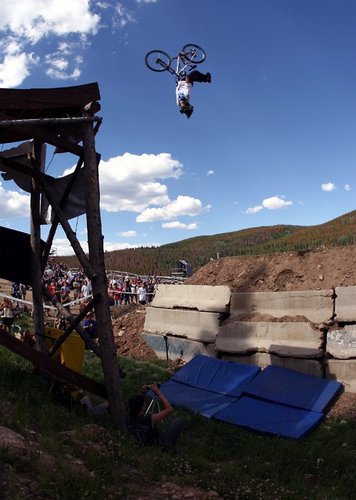 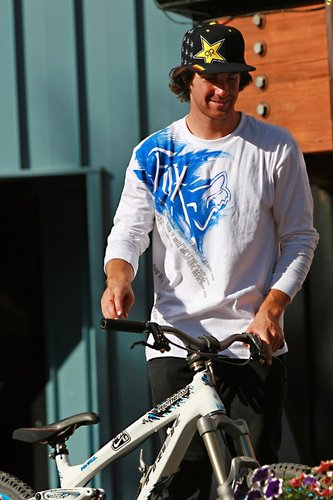 We were unable to get any coverage of the downhill due to it being at the same time as the big air comp, but stay tuned tomorrow for the results and the slope-style finals!

All event coverage of Crankworx Colorado 2008 by Ryan Meyer with pics by Mike Reid.

harriieee (Aug 3, 2008 at 2:40)
Looks like Cam's gonna walk away with C'worx Colorado again. Sick to see all these tricks going down now, last year was disappointing in terms of people bringing out new tricks in the big contests on the whole. Looks great, last year was fucking terrible, Alex Pro took 5th with the shittest runs, but it's looking really good this time around. Esp. as I watched Adidas slopestyle yesterday, and the course was rough with no flow.

brandonf (Aug 2, 2008 at 15:32)
slopestyle and dirtjumping is gettting insane
a superflip on a step down? thats just nuts!

jackalope14 (Aug 3, 2008 at 6:23)
im confused? was it like a normal slopestyle comp when the riders did a line then they go judged on that? or was it like just best trick of each section?

mikereidphoto (Aug 2, 2008 at 17:30)
Semenuk absolutly killed it, keep checkin back for slopestyle final update and tons of sick photos!

roobey (Aug 3, 2008 at 2:53)
I watched adidas slopestyle but that was nothing between this

mikereidphoto (Aug 3, 2008 at 8:59)
there was a best trick contest a day before the actual slopestyle

DavidMakalaster (Aug 2, 2008 at 17:48)
Ummm. Actually he got first in the Crankworx Colorado slopestyle last year.