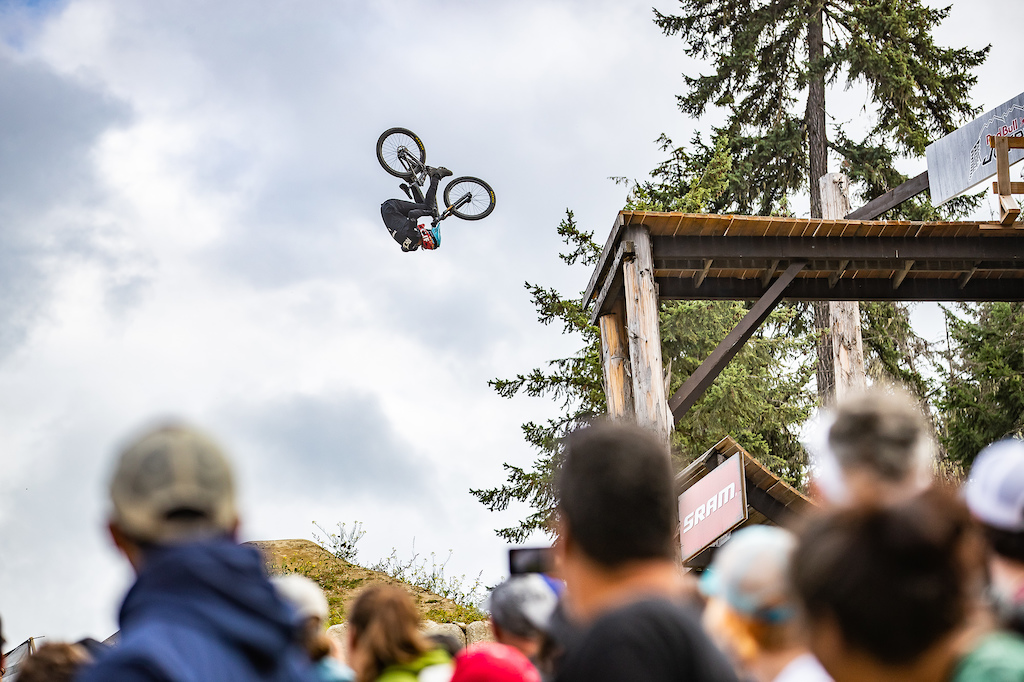 In three weeks time on Saturday, March 7, all the action, excitement, inspiration and drama of the highest level of Slopestyle mountain biking will take flight for another season. 14 of the world’s top competitors have been given the golden ticket and are getting ready to descend on Rotorua for the first contest of the Crankworx FMBA Slopestyle World Championship season.

As the pilgrimage to the Southern Hemisphere begins, the full rider list for the Maxxis Slopestyle in Memory of McGazza has been released.

First up, the top five from the 2019 SWC standings:

These riders have earned entry into all Crankworx Slopestyle competitions in 2020.

But noticeably absent from the roster: the reigning Crankworx FMBA Slopestyle World Champion. In recent years, Brett Rheeder has been the most decorated Slopestyle athlete currently competing on the circuit, second only to Brandon Semenuk in the history of the discipline. 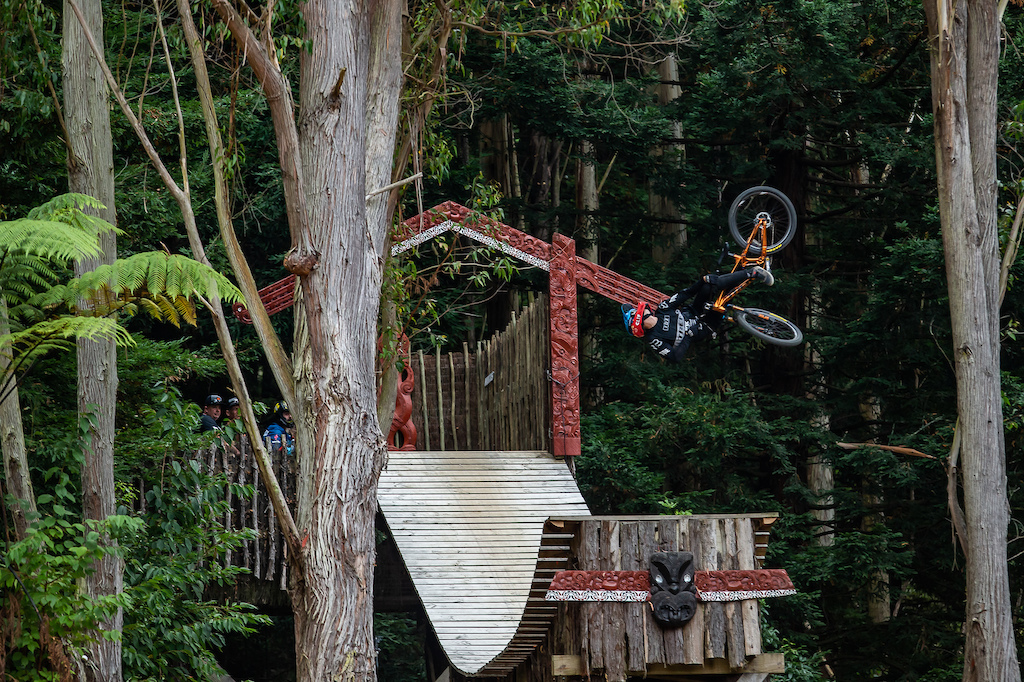 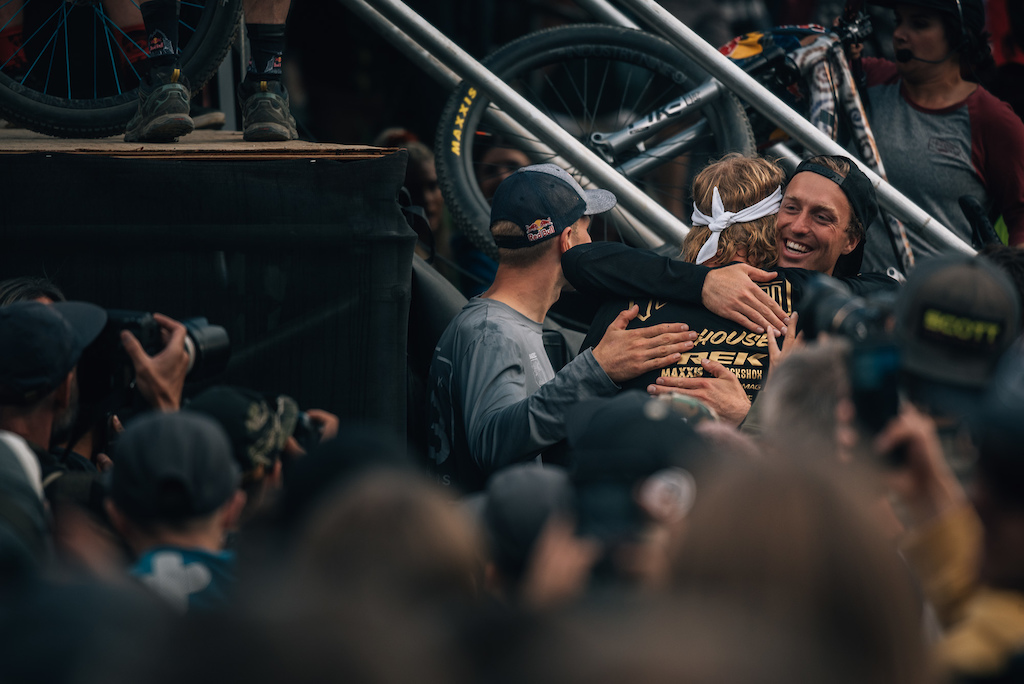 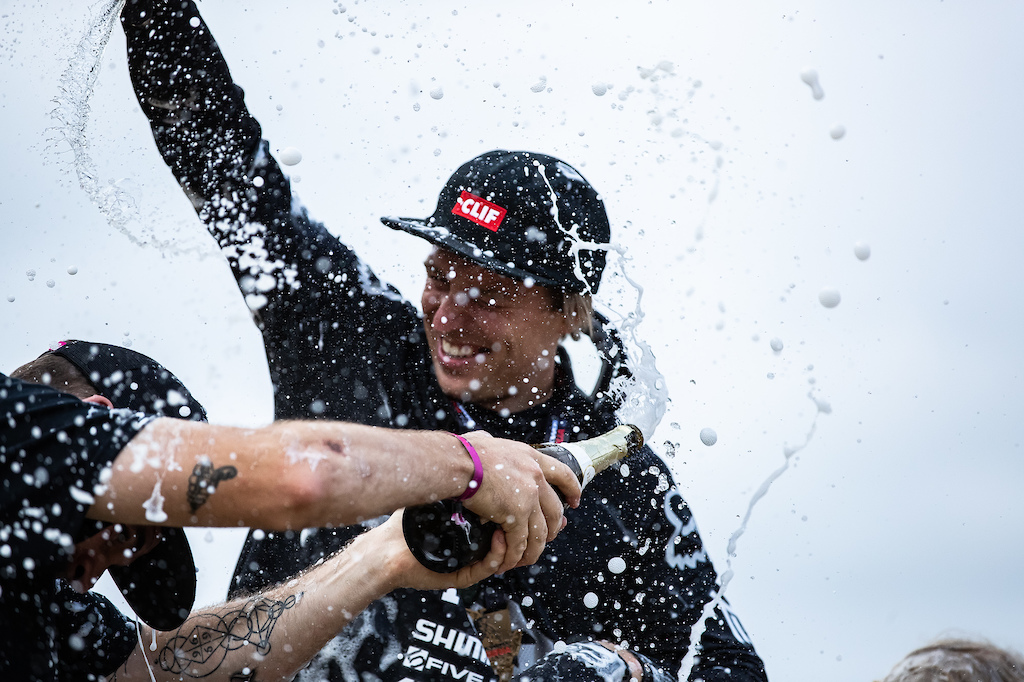 Photo: Fraser Britton
Rheeder, who turns 27 in under a week, has won seven Crankworx Slopestyle comps over the course of his career. He says he still plans to return to compete at Red Bull Joyride at Crankworx Whistler 2020, as well as Red Bull Rampage.

With the Canadian removed from the roster, Johansson becomes the top ranked competitor heading into Rotorua. The 23-year-old Swede returned to competition mid-season after a year off working through some medical issues. He came out swinging, placing second in Innsbruck and ending his Crankworx season on the highest note possible, winning Red Bull Joyride. 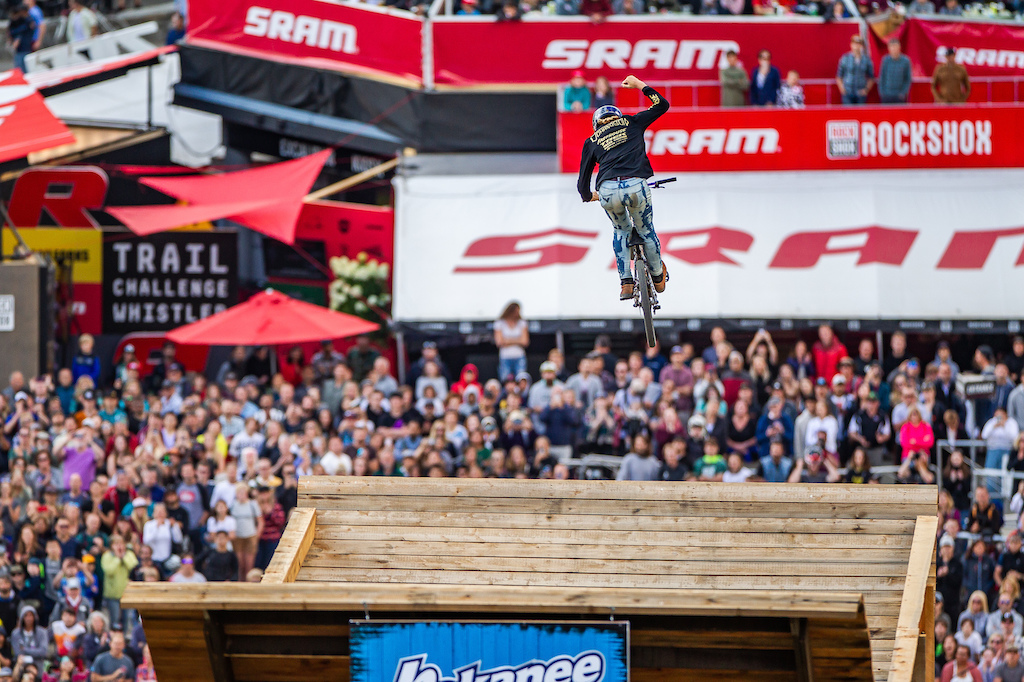 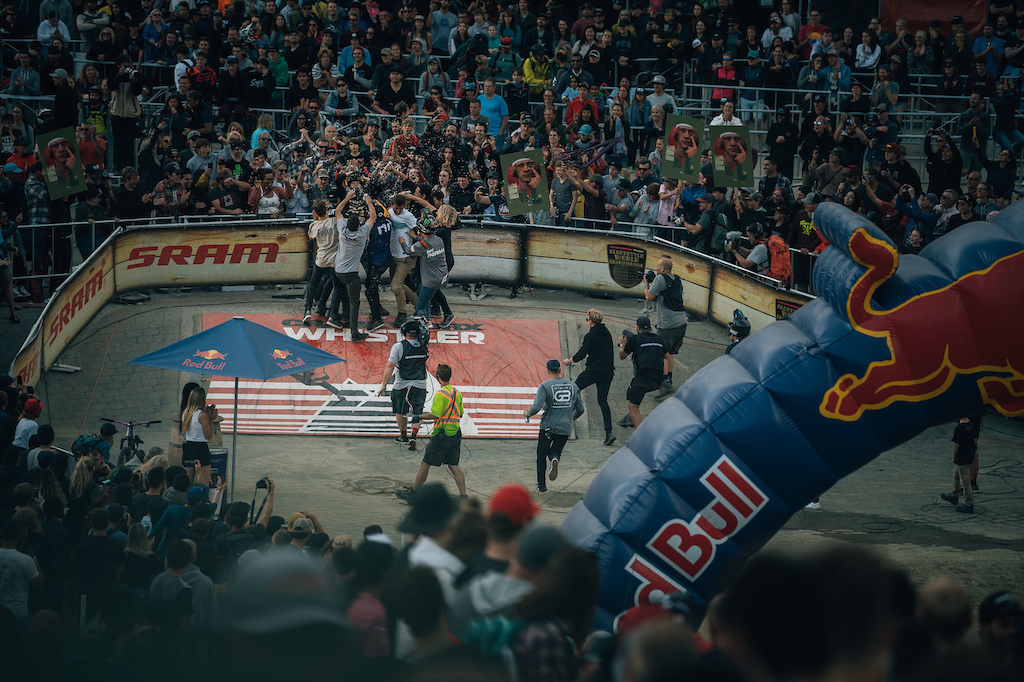 It’s a feeling shared by others who’re chomping at the bit to put their off-season training to work. 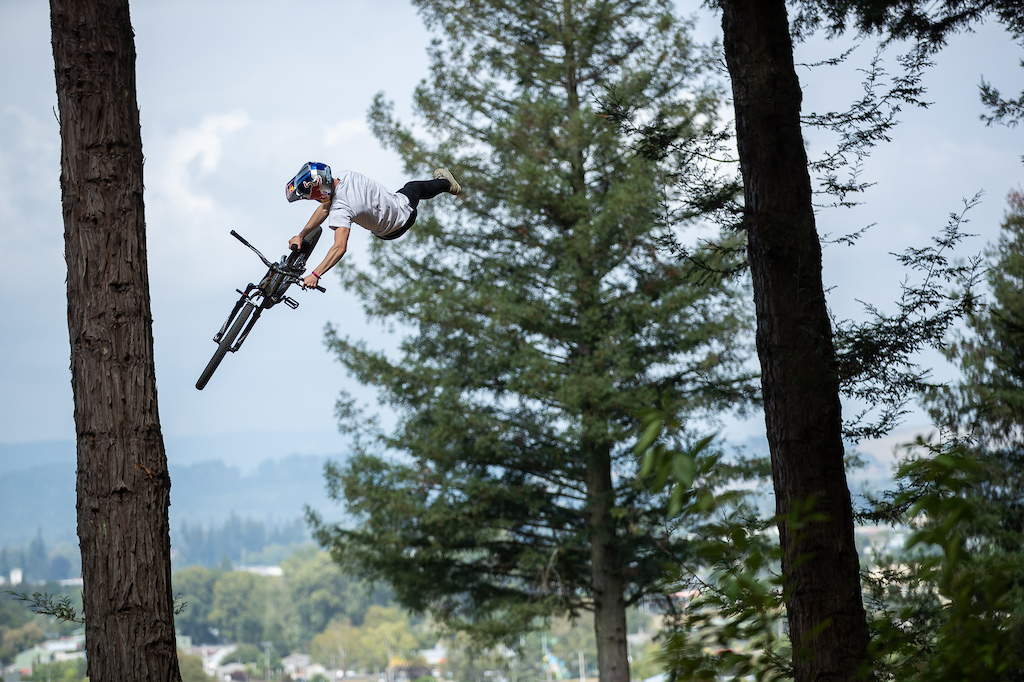 Erik Fedko, who'll be looking to better his top season finish of fith place last year. Photo: Fraser Britton
Following is the next top-seven riders from the FMB World Ranking. The ripple effect of Rheeder’s departure bumps Messere up from first alternate onto the start list.

The world will certainly be watching to see if Rogatkin can find his stride once again in 2020. After winning three out of four events in 2018, the American cracked the top five only once in 2019. Genon will also be looking to better his performance from last season - a fall off the first drop in New Zealand resulted in a shoulder injury that took him out for the entire season.


Rounding things out, two wildcards will join the pack.

Bringer gains entry as the 2019 Red Bull Rookie of the Year, while Marks earns his spot thanks to his strong performance in the 2019 Big White Tom van Steenbergen Invitational.

A new year and a new decade of competition are upon us. Who’s going to step up to the challenge and make their mark? 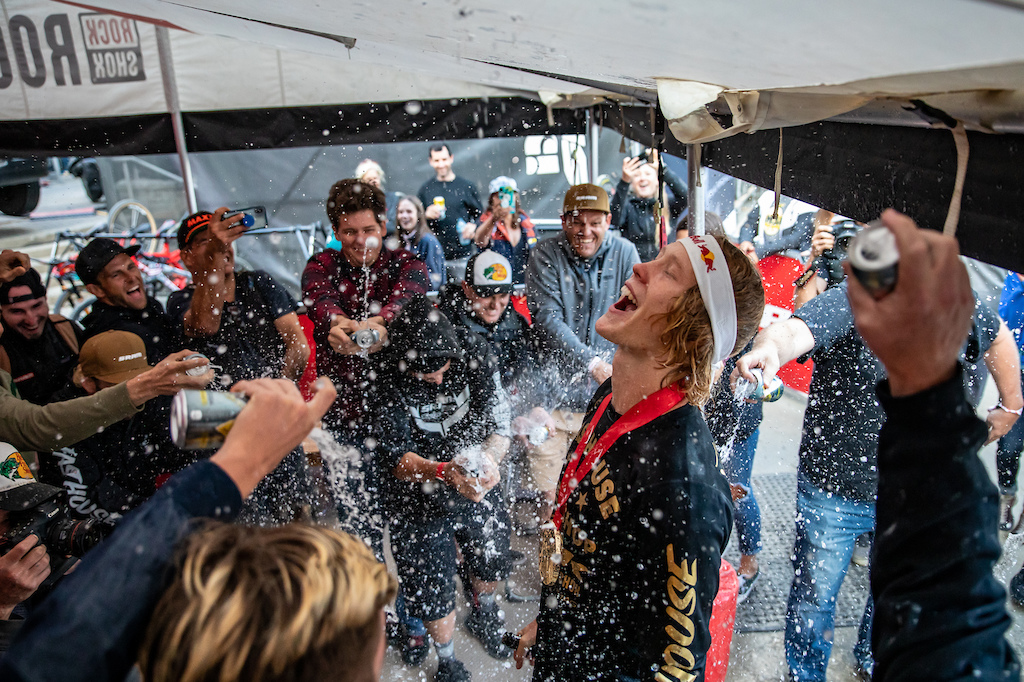 Where things ended in 2019. Photo: James Stokoe
Tune in Saturday, March 7 to watch it all go down.

Keep up with all the action from the Crankworx World Tour at RedBull.com/Crankworx, including LIVE coverage on Red Bull TV of:

You can also catch the action live on Crankworx.com, along with schedule and broadcast info, tickets, event details, and results from across the Crankworx World Tour.

I dunno guys, gotta be honest... I was really hoping to see Bill Murray out here on a new ebike, shredding lines like a monster.

rippersub (Feb 10, 2020 at 9:12)
Call me crazy, but if the people at the top of their game (Semenuk, Rheeder) are walking away from crankworx due to a number of reasons, wouldn't it be wise for Crankworx to take an inward look and ask "why", perhaps make some changes to keep the most entertaining guys competing? Ultimately thats what the fans want to see....

kungfupanda (Feb 10, 2020 at 10:27)
What if they removed judges and awards from Crankworx and Rampage, and just split the prize money equally among all the riders. Let the whole thing be a jam session. I'd still be entertained.

Every time I hear Cam McCaul going "WOW, the judges REALLY Love that!" ... & then they DON'T... & the pained silence afterwards... It's just cringe. Even to my wife, walking past the tv, "how come his score is so low?" EXACTLY.

I wish there was something as objective as a timer for Slopestyle.

My I posit:
1. Post a list of tricks with their 'value'. Then simple T-shirt size, "Good, Better, Great" for each jump, with a stated multiplier.
2. Sure there'll be more 'close' or 'ties'. Great: Do a run-off, -or-
3. Let the riders themselves decide.

Goal: Put the judges out of work, & make the contest far more enjoyable!

kungfupanda (Feb 10, 2020 at 21:01)
@taijidave: From what I can tell, most of the judges aren't really in the "business" of being a judge. They do it because it needs to be done, and it's an honor to be asked.
Having a point system wouldn't do anything. It may be worse. It'd make it more of a video game...
I was thinking that if there needs to be a winner, the riders should vote for it. Would be like a spirit award, effort award, and best rider award all rolled into one.

kungfupanda (Feb 10, 2020 at 22:54)
@rippersub: wait, also need a minimum payout for every invited rider. Privateers and low-level factory riders are on a budget! Nothing crazy. Just enough to not make it cost money to place 4th at Crankworx.

rippersub (Feb 11, 2020 at 10:29)
@mtbikemccoy: Sure, if the event organizers allow for it, priority should go to someone risking their life to win though, if it's not financially justifiable nobody would compete in the first place...

Call me crazy, but isn't the whole point of sponsors to cover the costs of their athletes, not the event organizers? This isn't exactly PGA golf here... There shouldn't be privateers at crankworx because a sponsor should have picked them up by then....

taijidave (Feb 13, 2020 at 13:39)
@rippersub: Is that what Rheeder said? B/c quite seriously, his style of 'oppo truck driver' (& bagging on Rogatkin's Twister every time he can) is what's pushing viewers away from Slopestyle. Very few of the crew I hit the DJ's with think much of the judging at Crankworks... or Rampage, for that matter.

If I have to ask, "Wait, was that oppo? Okay, so then, um, I guess that oppo 720 is worth more b/c it had a quick can-can" etc... I'm just hating watching. Stoke has left the building.

EVERYONE can see how awesome a Twister or double-backflip is. When the judges keep ranking those lower than 'oppo 720'? I think the judging isn't serving the 'stoke.

@mtbikemccoy : I do agree that being asked to judge is an honor. I just don't understand WTF they're judging on, & obviously, neither does the public, & nor even announcers like Cam McCaul.
Let's brainstorm on a more objective criteria, b/c there's clearly some major bias going on.

...& if Rheeder srsly is complaining? Dude, he was the clear beneficiary of a ton of judges bias, & now at Rampage. "Clinical not Flat-Out" seems to be the new judging criteria.

Don't mind me. Me & my bros will be watching the 'Fest series instead...

drmantistobogganmd (Feb 10, 2020 at 7:05)
I am hoping so. Them two and Tommy G are my favourites apart from Semenuk and Rheeder. I hope Emil continues on his current form. I can see him matching Rheeder and possibly Semenuk. Not much care for Rogatkin. Not as stylish or as interesting to watch as the others.

oakleymtb (Feb 10, 2020 at 10:18)
I feel like there needs to be more big diamond style events throughout the season and more variation to the slope courses so riders like Semenuk and Rheeder aren’t getting so bored of the scene. I also think with how hard these riders work in the off season there should be more contests for them to show off their hard work. Also let more than 14 riders in because there are a lot more capable riders.

AsafGurfinkel (Feb 10, 2020 at 11:10)
The diamond series because there were to many contests to attend so if you wanted to win the overall wich resulted in to much pressure for the riders so they summed it down to the 5 most serious comps

PB cracking me up negative propping me on that comment. LOL!

onemanarmy (Feb 10, 2020 at 19:53)
Stoked to see Owen get some more love. Been killing it for years. He road real well last year and put up some killer results all over the world.

lou-talks-mtb (Feb 10, 2020 at 2:18)
Can't even imagine how hard mega-spinning is, or doing what scores the most to win is obviously important - but I am hoping for an event filled with fun new tricks, something that is fun to watch. . ... ..

p2-fleming (Feb 10, 2020 at 3:37)
I can't figure out why us Brits are not more competitive here. We have have pockets of a great DJ scene but it doesn't grow. I guess some want to keep it that way.

highlinenthusiasm (Feb 10, 2020 at 4:17)
I feel like most Brits ride for style and not for contest winning tricks. Which isn’t a bad thing at all.

imsundee (Feb 10, 2020 at 4:46)
We dont have the scene for it, thats why, only really a handful of riders doing this. Was really hoping might have seen Matt invited again but seems not as he didn't have a great season last year.

brit-100 (Feb 10, 2020 at 6:32)
The UK scene just isn't competition focused. The only UK rider genuinely chasing ranking and titles is Tom Isted. Matt Jones, Pilgrim and the Reynolds brothers are far more media focused these days. It's not necessarily a good or bad thing, it's just the way it is.

mau416 (Feb 10, 2020 at 15:14)
Im kinda new to the whole slopestyle competition world,so could anyone tell me why max fredriksson isn't going to compete in rotorua?

AWDxTY (Feb 10, 2020 at 19:23)
Probably because he threw away his runs last season. Max is insanely talented and has so much bike control. I really was hoping he would throw down this year as well.

AndyMandura (Feb 11, 2020 at 4:42)
Hope Brett comes back after a year off.
Below threshold threads are hidden

mudmandhbrazil (Feb 10, 2020 at 2:34)
Slopestyle events will never be the same without the precision and style of Brett Rheeder.

nickgarrison (Feb 10, 2020 at 4:28)
Apparently you’ve never heard of Emil Johansson. Easily one of the cleanest riders out there.

taijidave (Feb 10, 2020 at 11:29)
@mudmandhbrazil
I just wish B.Rheeder was a bit more likeable. He always looks like he's getting teeth pulled when other ppl pull off a great run, let-alone 'force' him to make a 2nd.

His absolute worst was on the RedBull clip, when he said "I'd rather see an oppo truck-driver than another Twister".

Srsly dude? Lemme see you pull off a Twister, & then you can snark. At least apparently he agrees 'oppo' doesn't add much :-D

mudmandhbrazil (Feb 10, 2020 at 15:48)
@CalvR: man, how do you know I smoke? I love a good quality weed! But just because I like Brett riding style I am stone? So if I also like a lot Semenuk style I'm drunk? All Slopestyle riders are heros, those huge jumps. I like all of them....