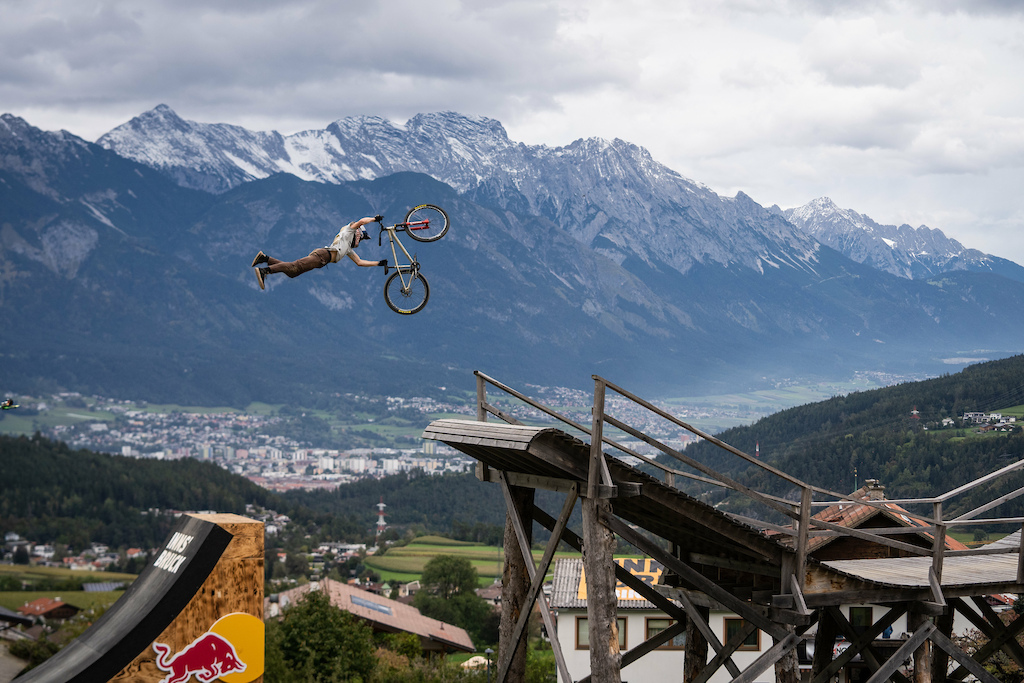 The legend of Tommy G, Crankworx Innsbruck edition. Photo: Kike Abelleira
We will never forget this year. Thankfully, for more reasons that just the pandemic. We will remember this year for amazing moments in bucket list-worthy places with inspiring humans. Cheers to them, and cheers to that.

We love a good "year in review" list, and this year it feels more important than ever to remember the things that made us smile over the past 365 days.

So as we bid farewell to 2020 (!!) and head toward what’s next, here’s a look back at the moments, people, photos and places that made 2020 awesome for us, in the midst of it all. We hope they made it a little more awesome for you too.

#10 - This nail-biter of a battle between Collin Hudson and Tommy Zula. 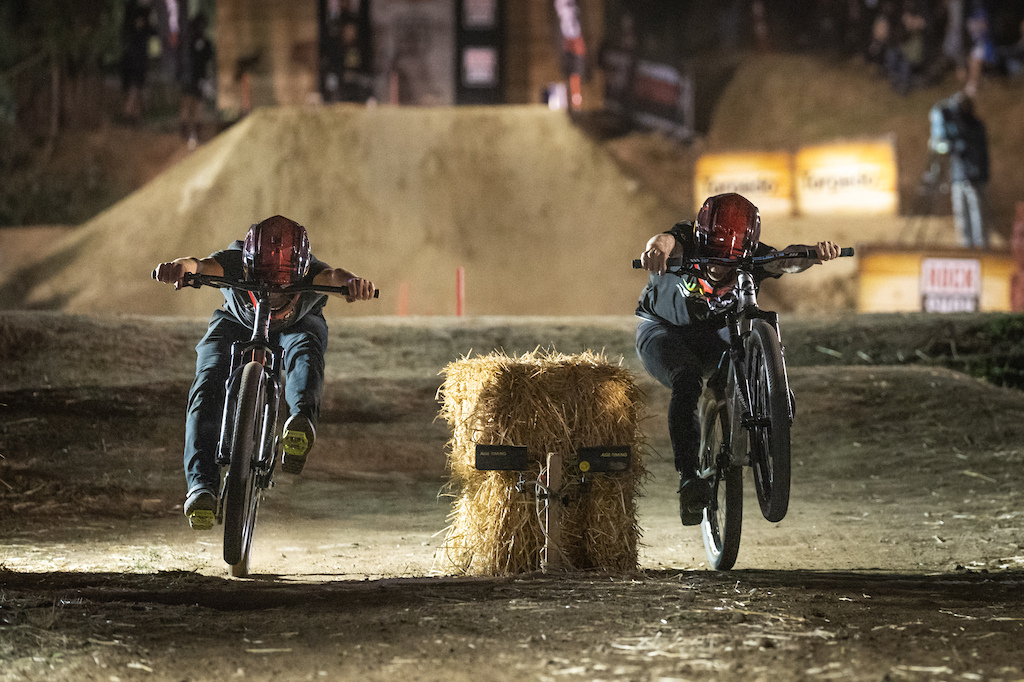 Hudson vs. Zula...or is it Zula vs. Hudson? Twinning teammates go head-to-head at Crankworx Rotorua. Photo: Kike Abelleira
On the Pump Track in March, Zula was matched up in the final round with his teammate and friend Hudson. Both were dressed in black with matching red helmets. Both had won a Crankworx Pump Track race before. And both were riding strong. Their first battle in the final round was a draw, their times so close that “WINNER” appeared underneath both names on the scoreboard. In the all-or-nothing round, a mere 0.01 seconds separated the two of them, Zula taking the win by a hair, the moment perfectly captured by Kike Abelleira. 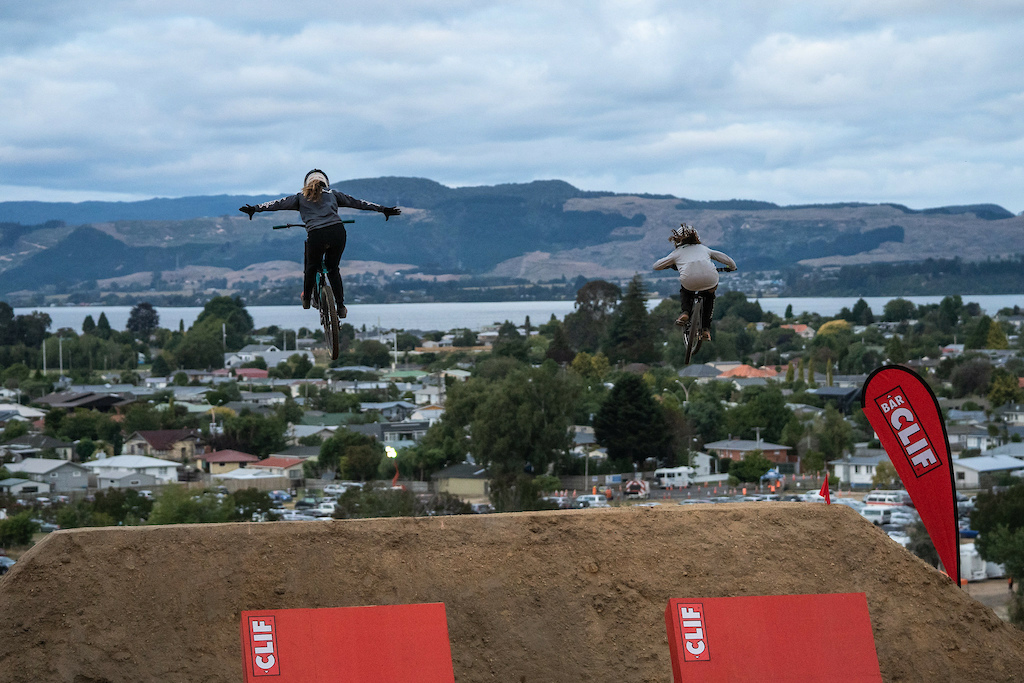 Vaea Verbeeck and Jordy Scott hit the final jump in the CLIF Speed & Style presented by Mons Royale. Photo: Kike Abelleira
Throwing down tuck-no-handers and tire grabs, Jordy Scott wins the first international women’s Speed & Style comp to be part of the Crankworx World Tour. “All the young girls that are coming up are so ridiculously skilled. They’re really pushing to get to this level. So being able to see that this is possible and to be able to have something to aspire to is so awesome.” 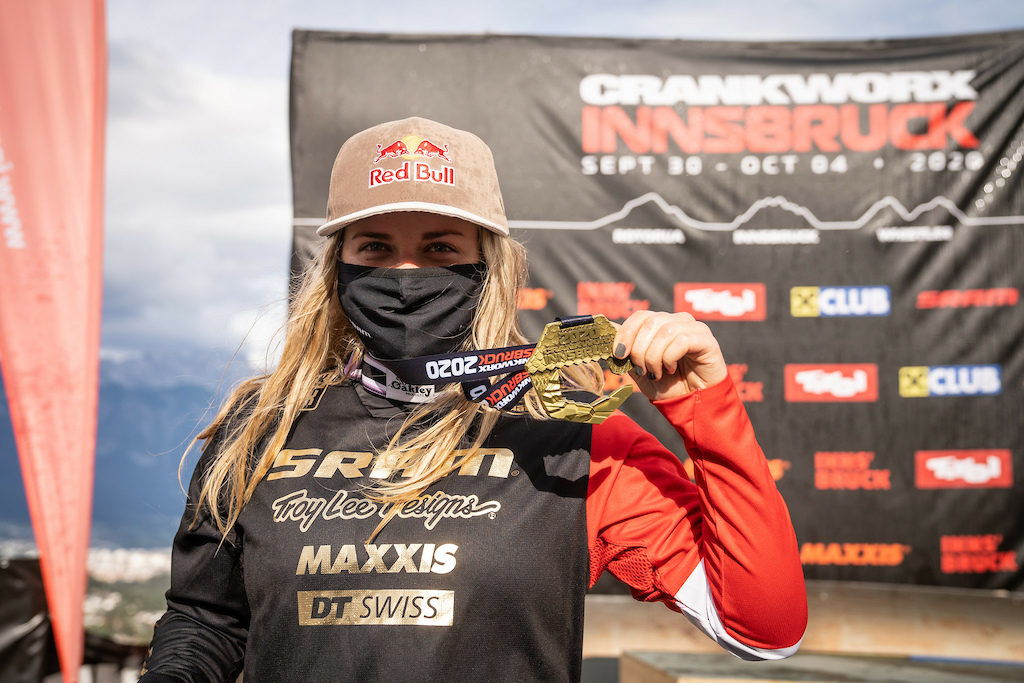 Golden girl. Photo: Kike Abelleira
Do you remember the first time you heard about Vali Höll? For many it likely sounded something like: "Have you heard about this junior who's smashing the times of the top elites??" And in 2020, she arrived, like a boss. In black and gold race kit, Höll clocked the fastest time of the day amongst the pro women in the iXS Innsbruck Downhill presented by Raiffeisen Club.

#7 - After seven months with no comps, Tomas Lemoine hits the ground running in Innsbruck and stomps e-ver-y-thang. 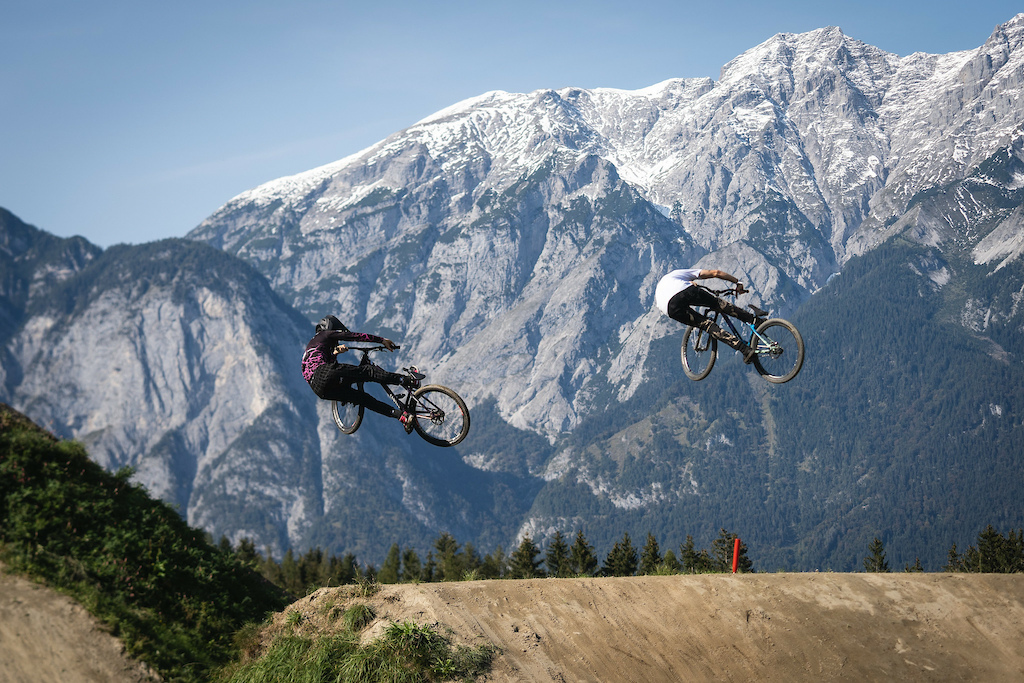 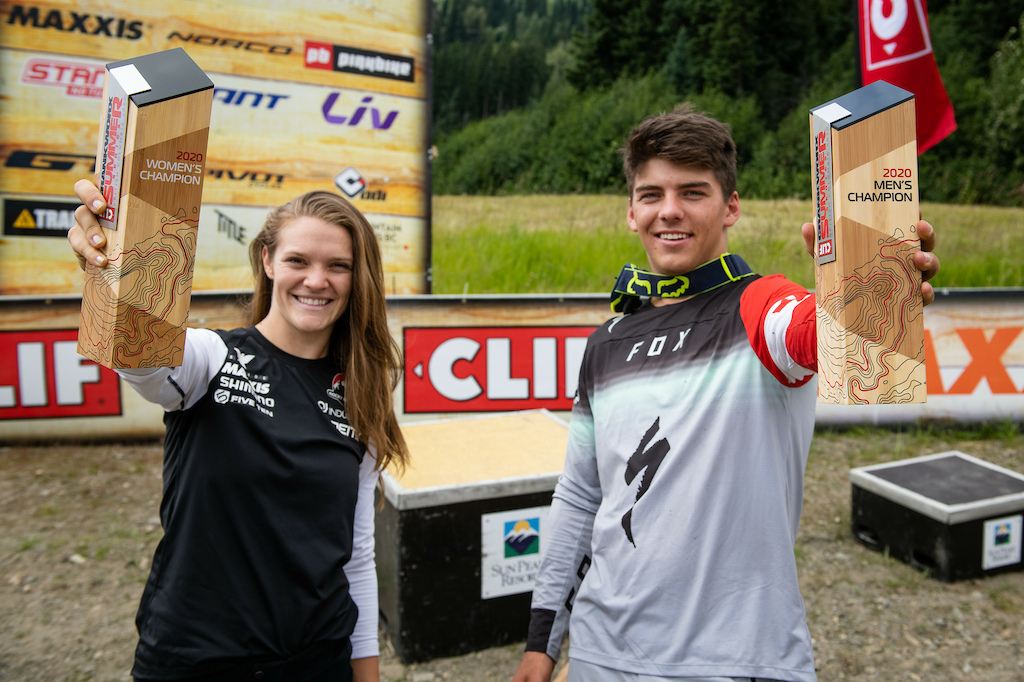 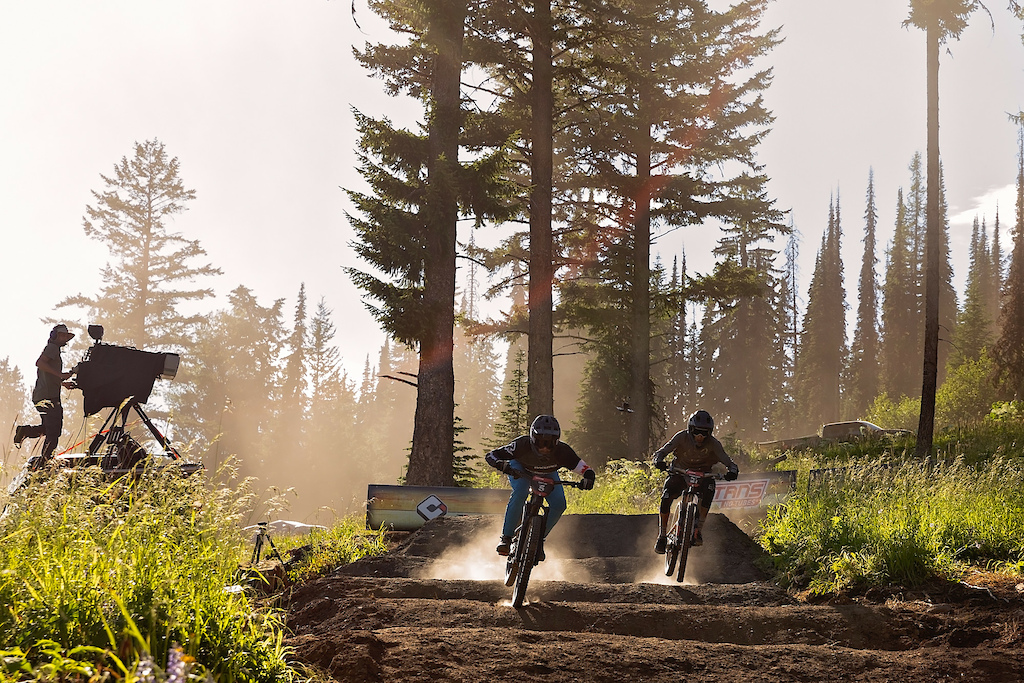 Remi Gauvin and Seth Sherlock in the first broadcast event of the CLIF Crankworx Summer Series. Photo: Clint Trahan
Was this a surprise? To be honest, it was a bit for us too. After coming up with the idea in April, we worked on the CLIF Crankworx Summer Series for months, but never with total certainty it would be able to happen (because...2020). At the 11th hour we got the green light, loaded up the vans, and hit the road for three weeks of bikes in B.C., sharing the experience with the world.

Aside from the obvious (bikes, cameras, action!), what did it take? Lots of Red Bull and CLIF product, an amazing physio, a top-notch team of mechanics, moral support doggos, and higher than average level of bike stoke. 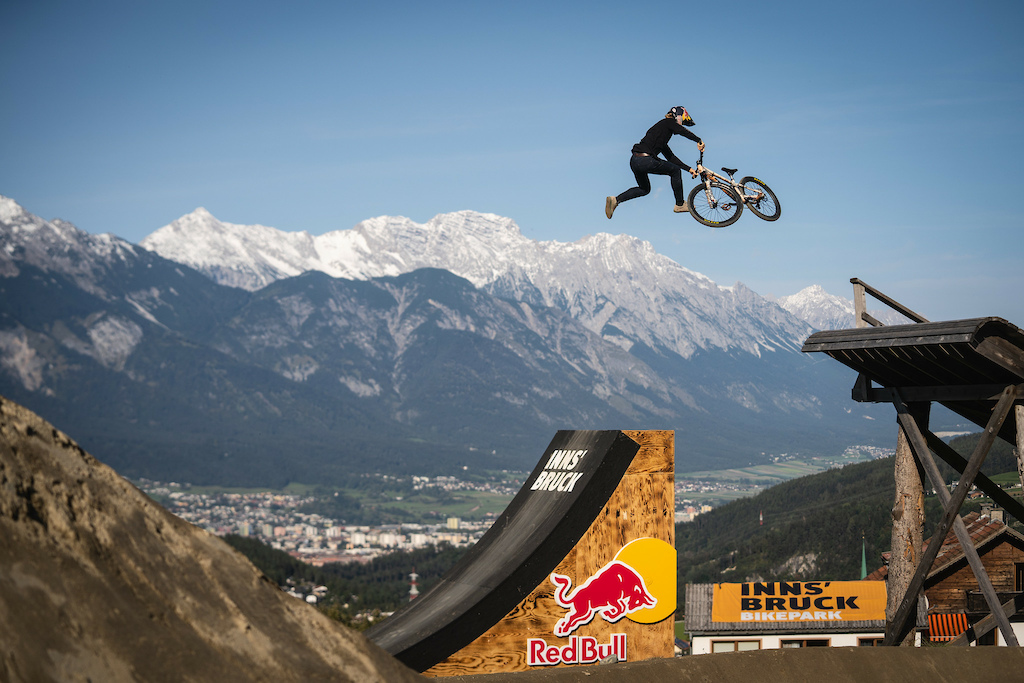 Johansson pushes for the top in the Crankworx Innsbruck Slopestyle in October. Photo: Kike Abelleira
On Instagram recently we wrote that Emil Johansson is changing the game. Someone replied: "He is the game." We stand corrected. The young Swede is now undefeated in three - his win in Innsbruck in October means he's won all Crankworx Slopestyle comps there is to win. Boom.

#3 - The Bulldog makes his comeback. 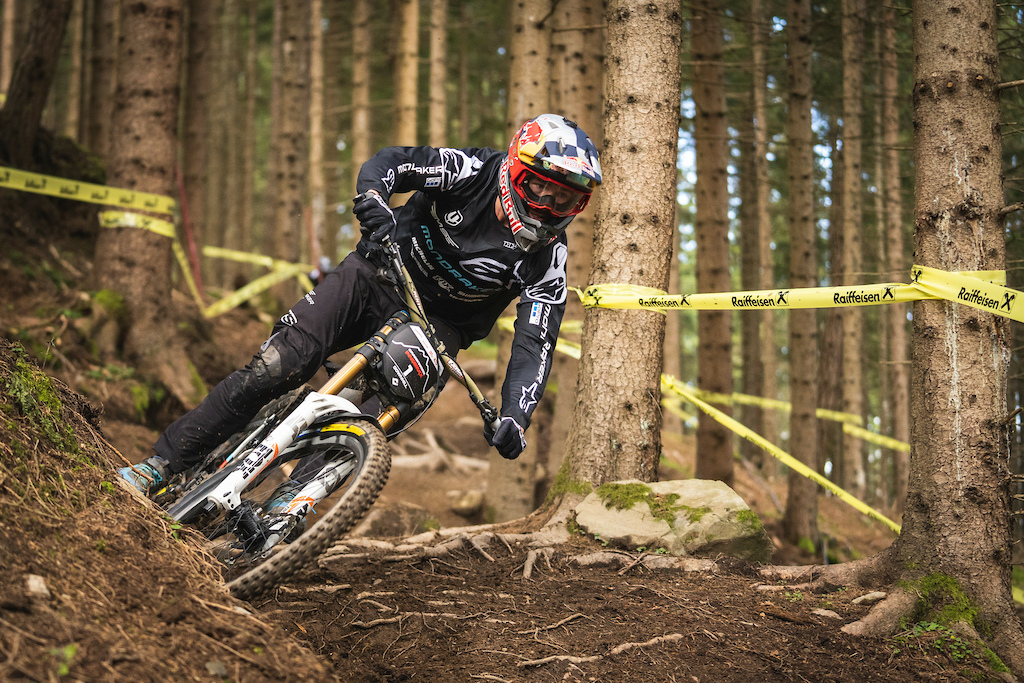 The Bulldog, back, and on point. Photo: Kike Abelleira
After a year of rehab, Brook Macdonald returns to racing at Crankworx Innsbruck. Not only did he roll up to the start gate once again, he charged, showing the world he is as on his game as ever. From relearning to walk, the Bulldog managed to finish his first international race just five seconds off the top time. It was a moment we were pretty honoured to be a part of. 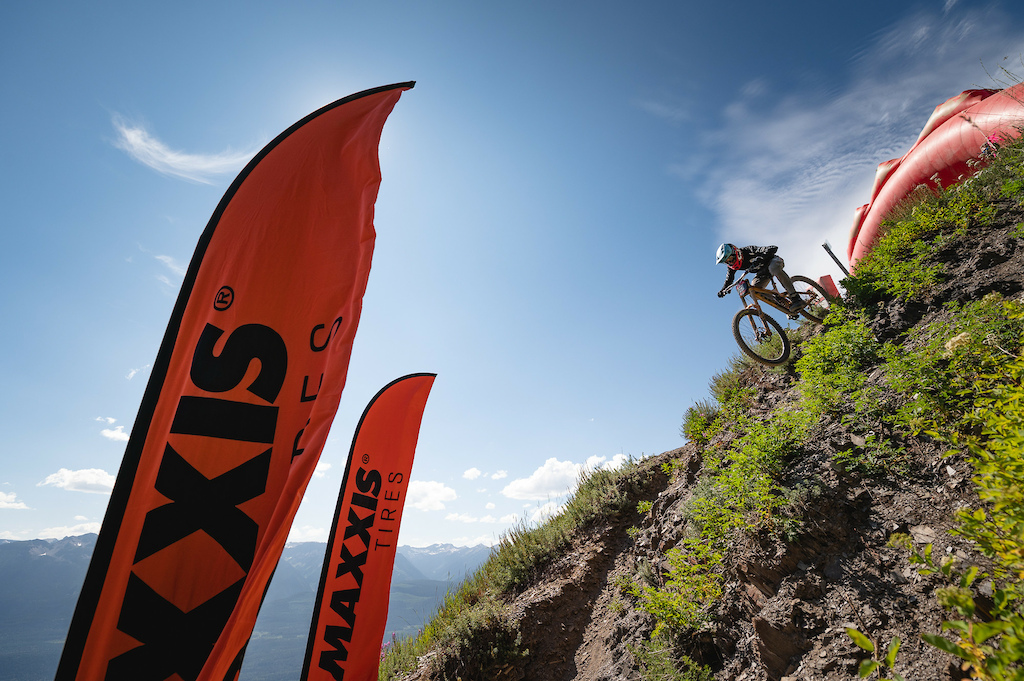 Brett Rheeder charges down Dead Dog on the top of Mt7 in Golden. Photo: Chris Pilling
This was a dream that took flight as the world shut down and we started looking to our backyard for adventure. Getting to bring the Mt7 Psychosis race back and share it with the world, well that was an experience those who were there won't soon forget.

Here are some little nuggets that may give some context to just why this race is so legendary: Golden Cycling Club Events Director Trevor Gavura described the pitch as "so steep, in some places it's physically impossible to stop," while from the finish line, riders described the sensation of feeling like they were breathing in "shards of glass" along the 11+ minute race track. Fun, right? Well, our kind of fun.

In case you missed it:


Cheers to the Golden Cycling Club for being rad, and to our racers who stood atop this gnarly peak, looked fear in the face, and let 'er rip. 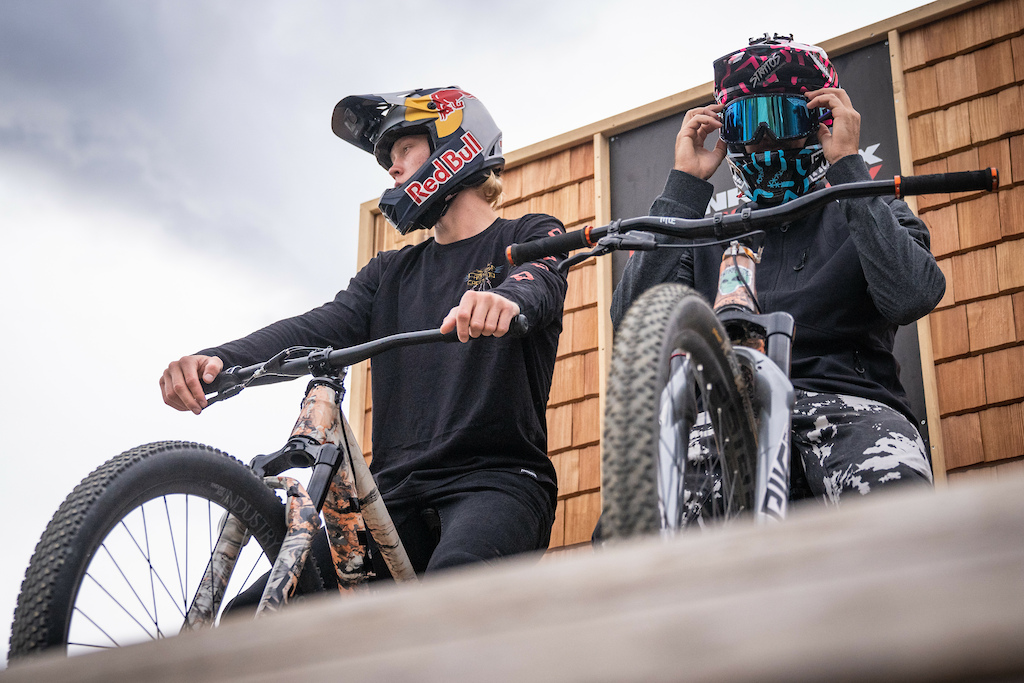 Getting ready for their victory lap, at the end of a season that really freaking needed a victory lap. Photo: Kike Abelleira
2020 has been a trip. A wild and unexpected one. We're incredibly grateful to have made it to this end, and to have left a trail of good times behind us.

We couldn’t have done what we did this year without our athletes and their unstoppable stoke. Our media partners who blasted the stories around the world. Our sponsors and partners and their support, flexibility and creativity. And of course, you. Our fans. Thank you for coming along for the wild ride of 2020 alongside us.

Here's to what's next.

Posted In:
Racing and Events Crankworx

p0zi (Dec 30, 2020 at 7:11)
Summer Series was fantastic. Not sure how it would look but having something like that continue would be great, but maybe with live spectating once opened up.

gmcc (Dec 30, 2020 at 9:37)
It really kicked off the season last year with a bang some great racing and warm up for EWS and World Cup racing