Greg Callaghan was last year's hometown hero when he won the 2015 Ireland round of the EWS series on a 27.5'' wheeled Cube Stereo, and now he's looking to do it again aboard a 29'' wheeled version of the same bike.

Like a lot of the field, Callaghan had been spending most of his time on 27.5'' wheels. However, he took delivery of his new Cube Stereo 140 29 just before heading to Chile earlier this year, but it isn't just the larger diameter wheels that he likes. ''It's a little longer than the Stereo 160, and then, with the 50mm stem, it gives me another 15mm,'' he said of his new race bike's longer stance. ''So I think that, overall, I've got 25 - 30mm extra reach in my standing position."

He's a fan of the bike's larger wheels and longer wheelbase, going on to explain how it seems to provide the best of two worlds: ''I just like the stability of the bigger wheels, and you kinda get that extra stability without losing the efficiency of the suspension when you're pumping and pedalling through the flatter sections here. For the high-speed stages it gives you that stability and confidence, but then when it gets slow, when you really need to work for your speed, it lets you do that.''

Does that mean that the prior EWS winner is sold on 29'' wheels? Not so fast, as things become more complicated when the series returns to the bigger mountains. ''I feel like I might keep it for the rest of the season, but it's hard to know until you get out to the Alps and see how it'll handle the rougher, gnarlier stuff,'' he said. 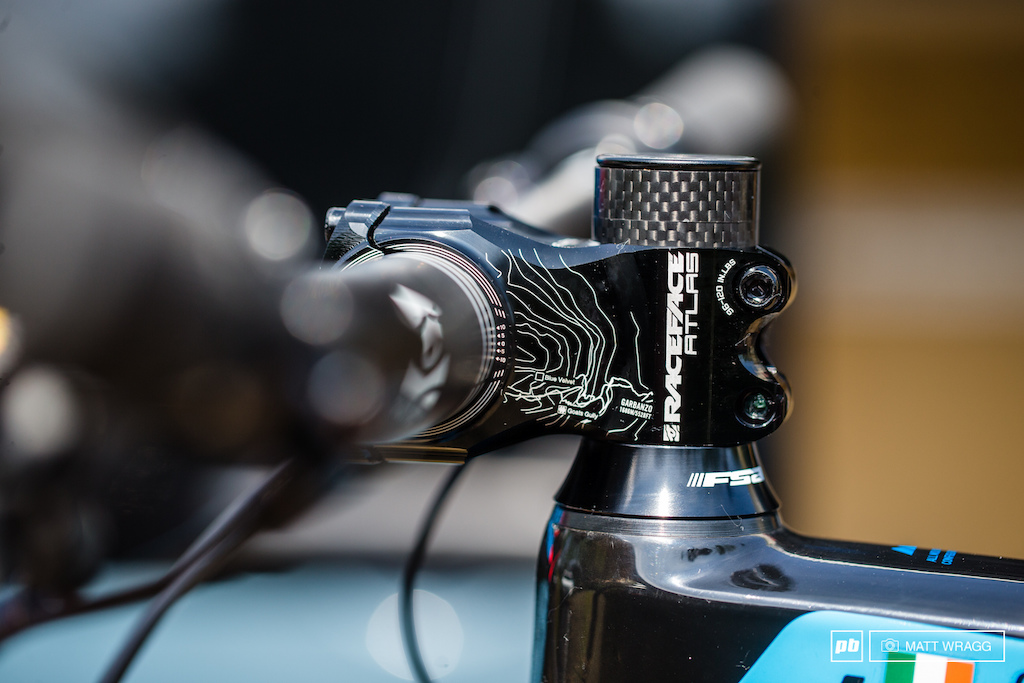 Greg runs a 50mm Race Face Atlas stem that's sandwiched by a number of spacers to let him change his handlebar height as needed.
Greg, at 5' 11'', is on a large-sized bike, and like a lot of racers in Ireland, his machine is sporting less travel out back than it would at those gnarlier rounds that might see him choosing a 27.5'' wheeled bike - 140mm via a Fox Float X rather than 160mm of travel. There's 200 PSI in the shock, as well as quite a few volume spacers; that's a specific setup tailored to match this weekend's course. Up front, Greg has stuck with a 160mm travel Fox 36 that sees an equally firm setup: 95 PSI and a handful of volume spacers to provide a good amount of progression. ''I find with having my weight farther forward, with that longer stem, it puts a bit more weight on the front so the fork needs a bit more support,'' he said of his stiff setup, and let's not forget that at 80 kilograms, Greg is one of the bigger guys on the circuit. "I am quite heavy so when my weight goes forward, it's quite a lot of momentum.'' 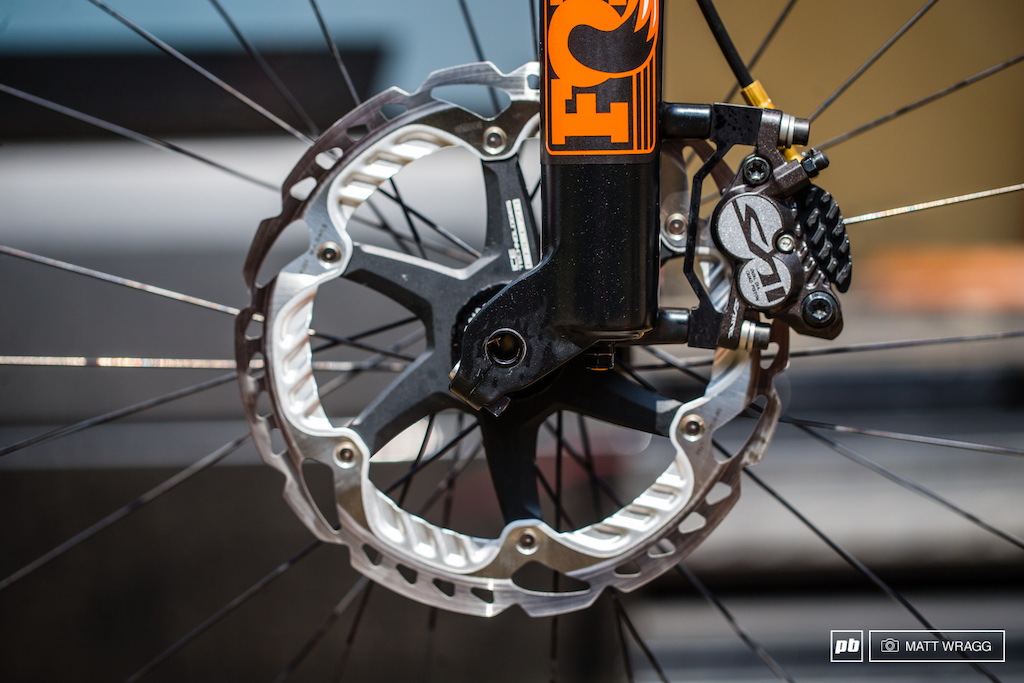 Got power? Greg obviously does. 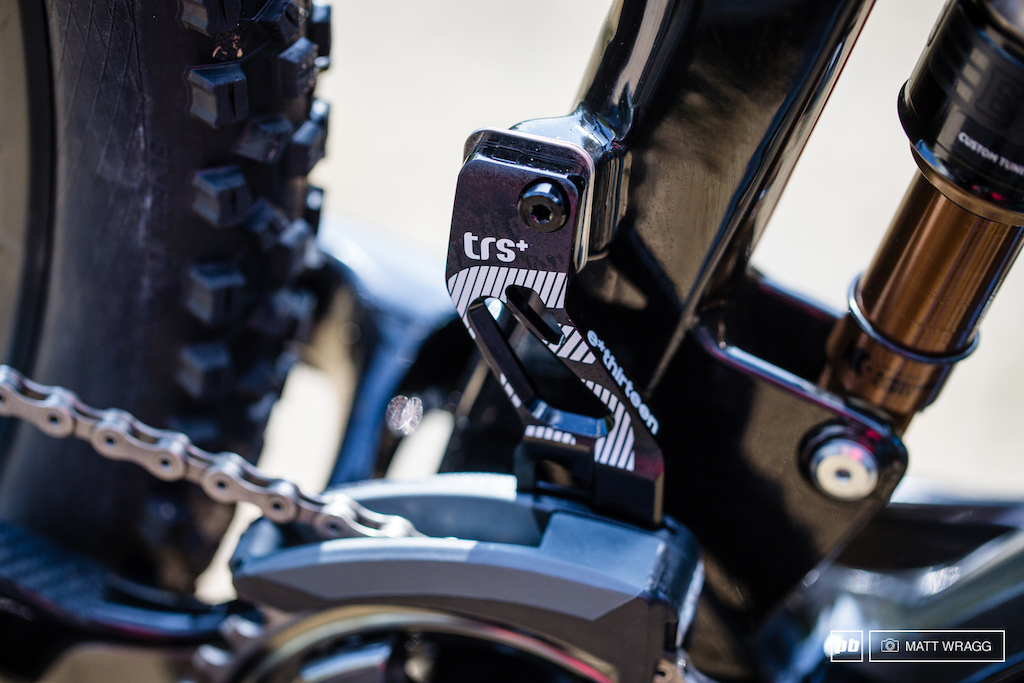 Callaghan's bike sees both single double chainring setups depending on his needs, but the relatively mellow climbs this weekend mean that he's running the former. ''Yeah, just for this race. For Trans-Provence, I'll put on a double,'' no doubt to make the long days in the French mountains a bit easier. ''For here, the fire roads are quite mellow to climb, so I like the simplicity of having the single ring."

He's running a 34 tooth ring on his mostly Shimano XTR Di2 drivetrain - there's an 11-42 tooth XT cassette out back - as well as an e*thirteen guide to make sure his chain stays put. 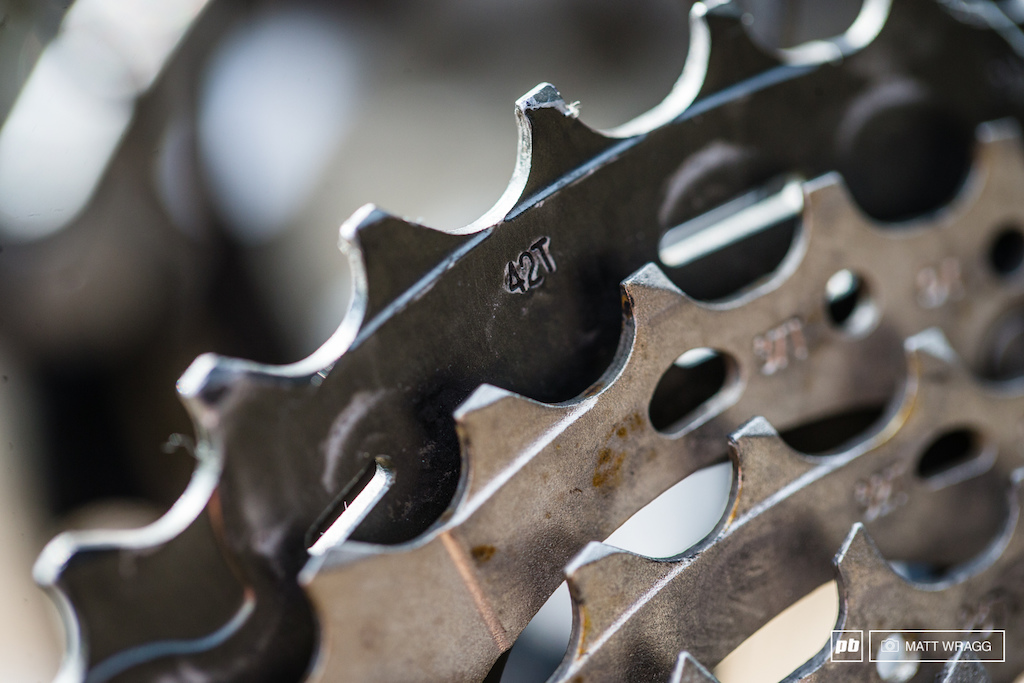 Greg is running an 11-42 tooth Shimano XT cassette rather than the lighter weight XTR model. 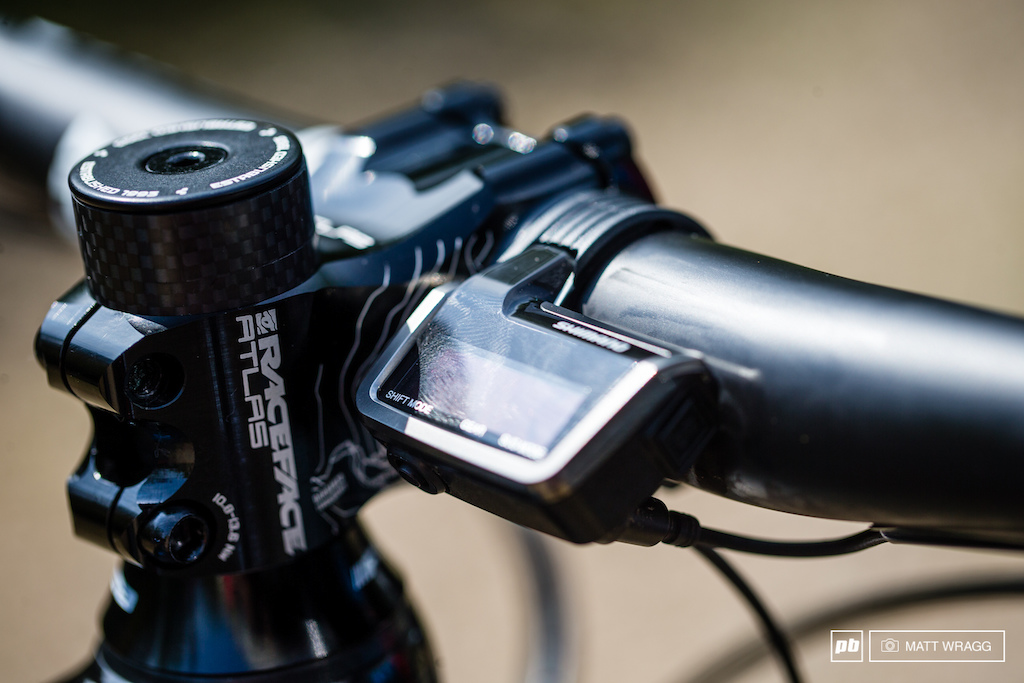 The Di2 computer head is tucked up safely against the stem.

Greg doesn't often deviate from his usual Magic Mary and Hans Dampf tire combo, and that's exactly what he's using in Ireland, with both being of the Super Gravity casing variety. He says that, due to being a heavier rider, he prefers the stiffer casing as it provides more support, and that his only change is that he sometimes runs a Magic Mary on the back of the bike if things are really muddy or it's an extremely rowdy course.

And speaking of rowdy, he's using a set of Saint brakes with 203mm rotors, saying that ''the races are getting faster and more gnarly, and they just give you more control. It's good to have that extra bit of power." 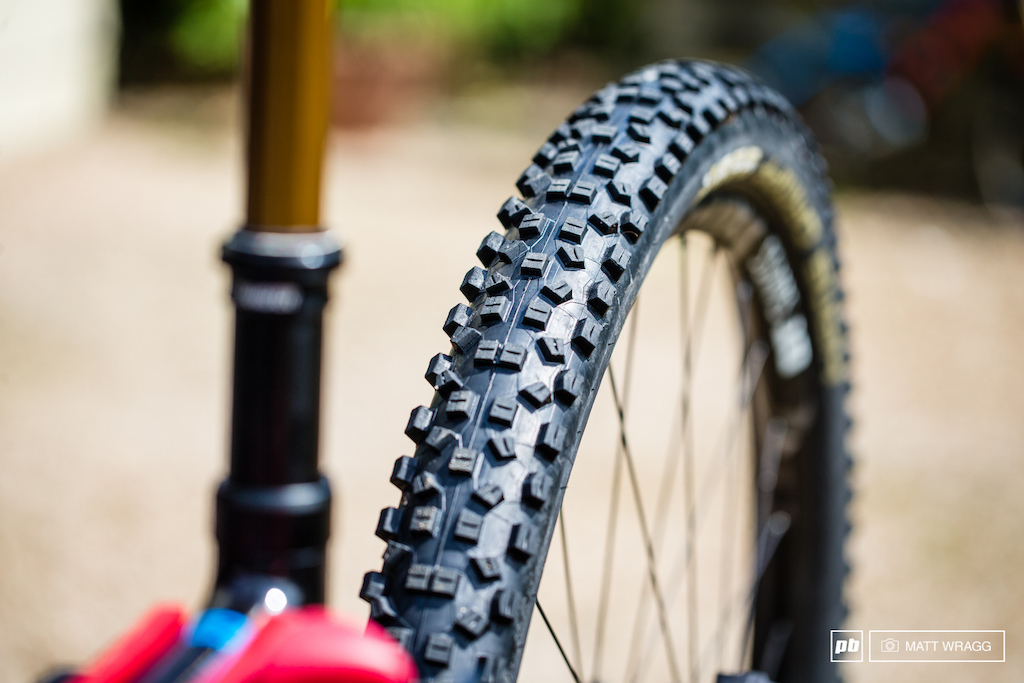 Greg usually runs a Hans Dampf with a Super Gravity casing on the back of his bike, and Magic Mary up front.

thisistopher (May 12, 2016 at 14:07)
This is exactly what I was thinking, I'm the same weight as you and there is no way I would consider myself heavy.

atrokz (May 13, 2016 at 6:06)
Yea 176lbs is not heavy by most athletic standards. In fact it's pretty light for a 5'11" guy. If you're that height with a muscular build you're past 200lbs more than likely, as is evident by nearly all sports and esp combat sports (because the weights are recorded) where guys who cut to 170lbs are walking around well past 200lbs daily.

90psi in the fork seems absurdly firm too.

CorneringKnobs (May 14, 2016 at 14:40)
@CantClimb: And wheelbase and wheel size are totally independent. You can add high speed stability, if needed, by for example making WB longer. Or if extra room is needed, go with a longer stem added to that. These changes are not related to wheel size, per se, eventough it, of course, makes difference to riding dynamics as well.
But nice way to promo new product. And at the same time this frame manufacturer has rather large banner ad on this site, how convenient...

Avigazed (Mar 19, 2017 at 8:53)
@headshot: I suppose it's just a preference. Curtis Keene rides a 29er. I'm not sure how often but he did ride one at last year's EWS Whistler round as well as in Italy and France.

I dunno why anyone is questioning his weight or setup afterall he did win this thing last year and happens to be one of the country's finest riders in all disciplines I've seen him in.Hes a professional at the end of the day and he knows what's right for him.

Maverickdh00 (May 13, 2016 at 13:59)
Nice bike even with the Wagon wheels! Im closing in on the time of age when 29er makes sense to me, about 4yrs to go and Ill be crossing the boarder lands into a half cent so then I reckon my body, brain, legs etc make sense to finally go to pasture and ease off the pace and crusie around on a wagon wheeler, hell I even have a fatbike, all steel Icecream, no fance pantz bs just plain fun SS mode, but since I'm in the snowline it sort of makes sense thoug nothing in biking makes sense to me nowadays, ride what chew got pussys, Peace

AyJayDoubleyou (May 13, 2016 at 5:15)
Has any male won a EWS round on a 29er?
TMo obviously dominated on one (and she surely had the choice of anything from Trek)

AyJayDoubleyou (May 13, 2016 at 1:48)
He's got what I assume is a 150mm dropper in there. So he won't be hitting balls on the top tube unless he's already ripped his saddle off with his tailbone.

jesse-effing-edwards (May 13, 2016 at 5:35)
@AyJayDoubleyou: More an aesthetic comment. I'm sure he's handling himself just fine.

AyJayDoubleyou (May 13, 2016 at 8:54)
@JesseE: True. Aesthetic is all opinion. If I went purely on looks I'd rather a high top tube than a huge amount of seat post showing.

taifi (May 12, 2016 at 14:02) (Below Threshold)
@CaptainSnappy: because this year you see that all the trends are forwardind the 29er wheels in the big picture so that's made to buy it, I'm a 6' ft (1.84m) tall guy and when riding 29er downhill it makes me push the brakes. For trailing and cruising may be ok, but going on a gnarly trail with roots and rocks, narrow places and fast cornering, it won't be better then a 27.5 wheel.