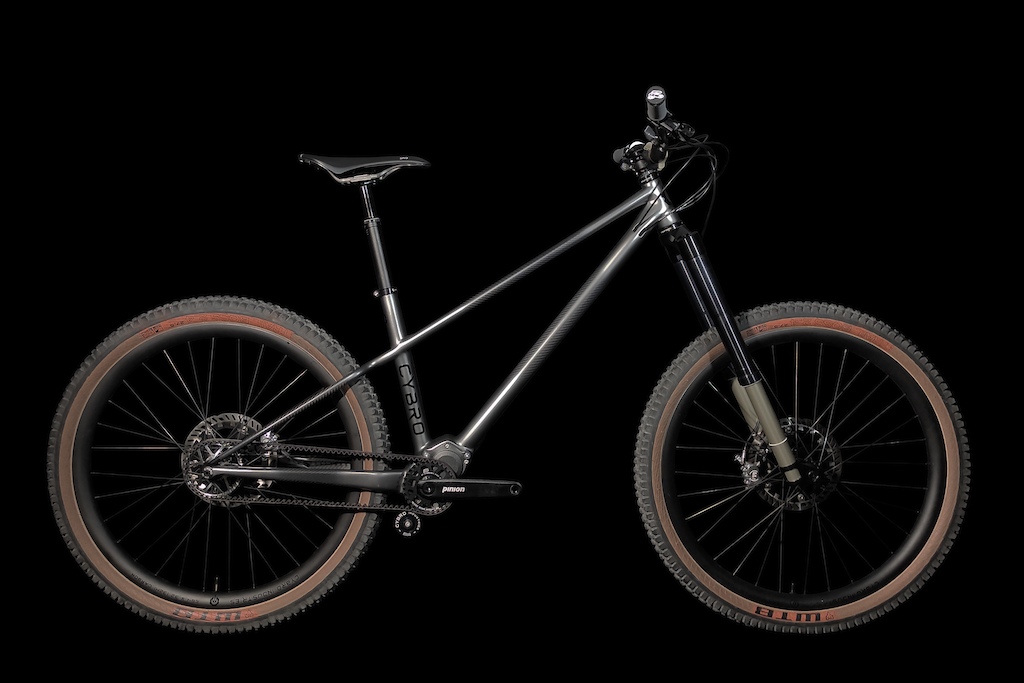 Cybro's eye-catching N6 hardtail has been making the rounds, first appearing and Eurobike and then more recently showing up at the Bespoked show in the UK. The carbon frame is made in Bassano Del Grappa, Italy, and uses Pinion's C12 gearbox.

The C12 has 12 gears that are separated by 17.7% steps, with a total overall range of 600%. Part of the allure of hardtails is the lack of pivots, and the resulting reduction in maintenance. The addition of a gearbox takes things a step further - the only maintenance Pinion says it needs is an oil change once a year, or every 10,000 km. The C12 is driven by a Gates belt, with a bolt at the junction of the seat and chainstays to make removal possible. Intend's Edge fork handles front suspension duties, delivering 180mm of travel.

There aren't any concrete geometry figures available, because Cybro individually tailors each N6 to its rider based off of their measurements. The N6 is designed to run 27.5" wheels though, an interesting departure from the trend towards 29" wheels, especially on hardtails.

The complete built shown here is price at 7420 Euro. Needless to say, this certainly isn't a budget build. 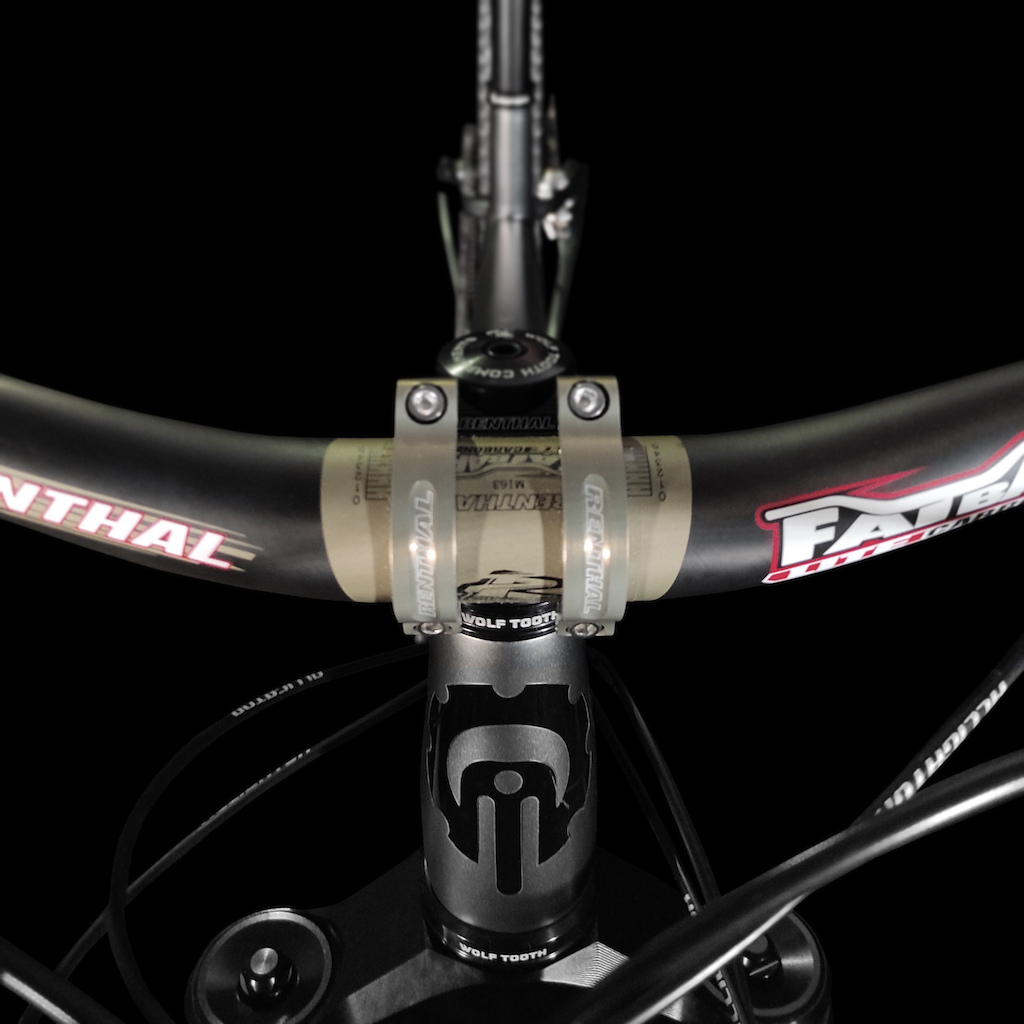 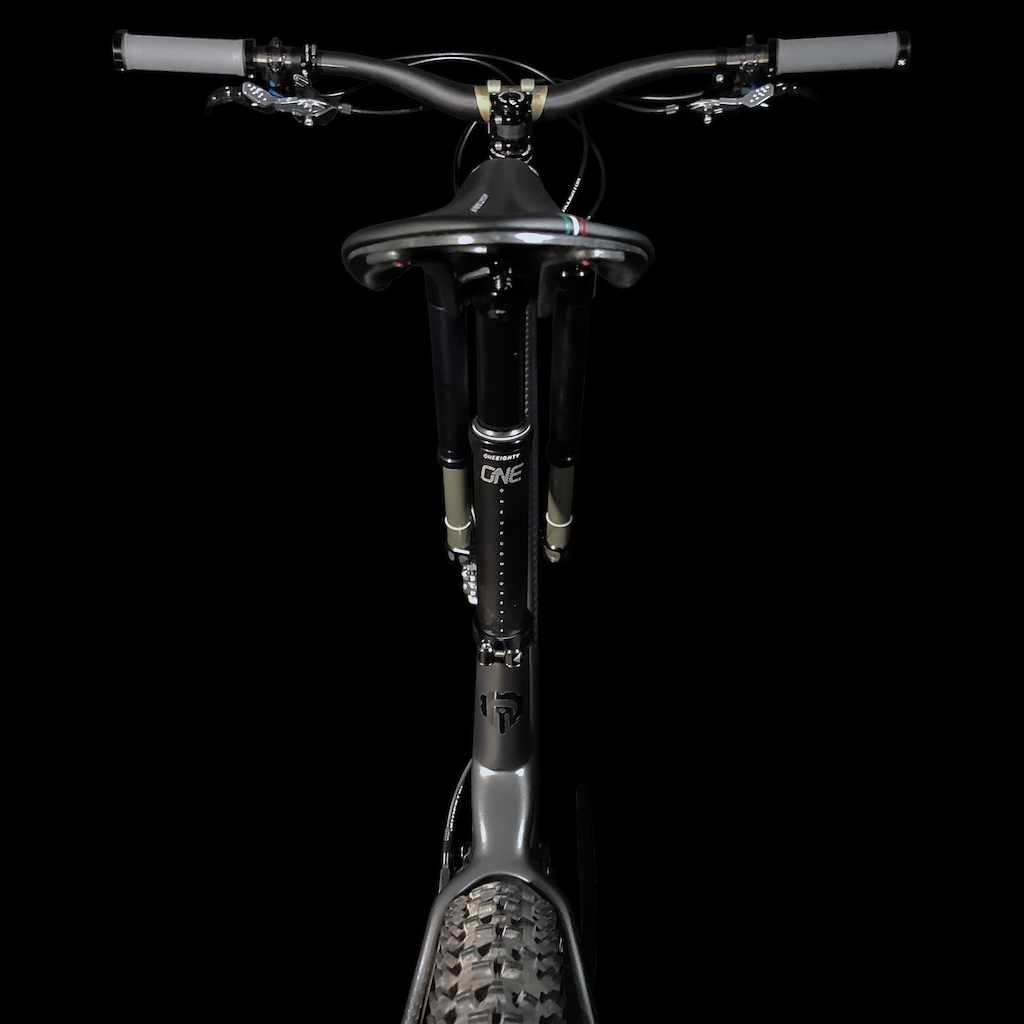 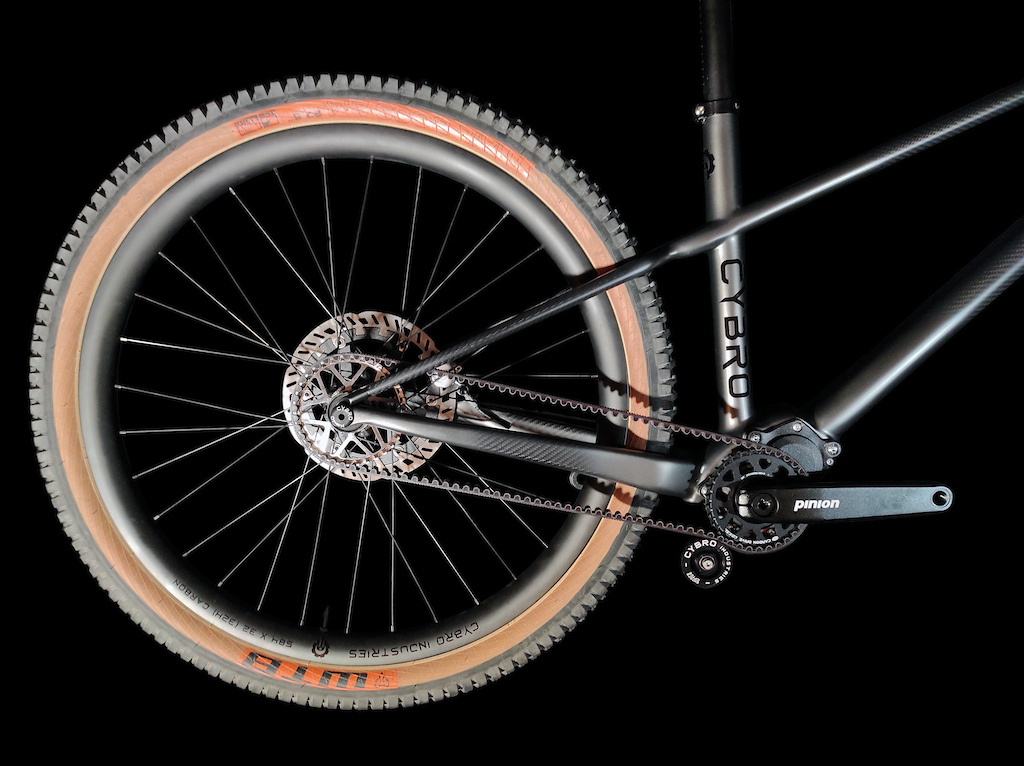 My experimentation with aggro hard tails is that beyond 130mm of front travel the mismatch of front to rear makes riding fast painful and unenjoyable. IDK maybe I'm just a grumpy old man.

hamncheez (Nov 23, 2021 at 16:04)
@dirtyburger: I find you can run a 130mm soft but with volume spacers- it makes dynamic ride height and effective travel roughly the same as a 120mm fork, but it rides soft off the top and saves the hands.

optimumnotmaximum (Nov 24, 2021 at 0:21)
Riding a hardtail fast is always painful. In order to compensate for the lacking rearsuspension you have to lean forward and "ride the fork". A propper fork helps with this but it comes more down to how good the fork is in general and not to how much travel it has. Considering this i would not put a 32mm fork in an aggro hardtail. Traditionally burlier forks also had more travel, so maybe this is why aggro hardtails came with 160 forks. I have got a 140 mattoc on my hardtail which is a blast to ride. It is setup quite hard and i usually use 95% of the travel. I think you have to setup the forks on a hardtail quite hard,as you are putting a lot of force on it while leaning forward in order to prevent the fork to just dive. Because of this, it may be hard setting up a 160 fork propperly and still getting full travel. But if you are a crazy mofo and still bottom out your stiff 160 fork on the hardtail, why not go for it ?

lucaj (Nov 24, 2021 at 0:21)
I think these things are sometimes about how the bike feels and how you feel riding it. Yeah I agree 130 is more logical on a hardtail, but it's not always about that. (Written by someone who also rides a fixed gear)

danstonQ (Nov 24, 2021 at 0:39)
@hamncheez: Agreed. I've tried different configs on my 27.5 Stanton Switchback, and I finished with the fork (Auron R2C2) at 160mm with 3 air tokens and a lowered pressure to maximize the confort thanks to an extended negative spring. So in static it has 160mm, but once on the bike and with the sag I have something like a 140-130mm travel. Much appreciated in the rough and/or steep terrains.

The 419 CS make it wheelie fun and manual like a dream. Pop n play, no problem for a bunny hop mid trail to get over a nasty root ball or navigate the north shore tech. I should note that I run a size down (m/l, 465 reach and Im 182 cm tall). 63.5 degree HTA, oh baby yes please. Diving into the steep rolls and jank feels so much better e.g. the roll on upper oil can call big slick felt way better on my hard tail than my previous trail bike, the jeffsy with a 67 HTA (ew).

Now I haven't ridden it on too much some really scary stuff or Cypress but if you are into a n+1 bike, go chromag for fun do it all 27.5 long travel.

monsieurgage (Nov 24, 2021 at 9:41)
@optimumnotmaximum: True, this may be a stylistic question relating to travel in the end. I think if you ride aggressive trails then naturally the travel will increase. Pike was too flexy while a lyric meets a nice middle ground. In those brace for impact at speed moments, you just hope your ankles survive no matter what.

slipnjloc (Nov 25, 2021 at 15:38)
clearly you havent tried bikes like that and it shows.. theres some hardtails that have a better geo that can handle long travel and with newer suspension being so good how can it be detrimental if you dont even detect any bob. again geo with a steeper seat angle will help its manners uphill.

Red-October (Nov 25, 2021 at 23:12)
@nullzwo: This! Reach plays an important role in the dynamics of hardtails, longer bikes = less modified geometry when compressing the fork = can take longer travel forks...

BenTheSwabian (Nov 23, 2021 at 16:07)
I think if a bike is meant to be ridden in a place where it would benefit from a 180mm fork, it should probably also have rear suspension.

Kainerm (Nov 24, 2021 at 1:04)
Have you ever tried something like this? I bought a sick frame a few years back (OK, I had to get it from Peru directly after Sick folded), and I've not ridden my FS enduro five times since I own that bike. Long travel hardtails can be so much fun... They require a different riding style, but everyone who actually dared to try it said they were blown away with the confidence they had on that bike.

monsieurgage (Nov 24, 2021 at 9:45)
N+1. I broke my frame in two places one year and bought a HT. Could not be happier. Rowdy stuff or shuttling -> full susp but a skills day or day when I am going slower with newer people -> HT all day.

HTs can also be a bike packing, DJ and trail bike. They just fit easily into more slots. That being said, some downcountry bike look mighty good too e.g. transition spur.

And the inability to properly tension the belt without a huge roller just isn't pretty. It needs a more elegant solution than slapping a big ugly roller to a nice looking frame.

kfilenda (Nov 23, 2021 at 19:02)
Haha! Carbon rims on a carbon hardtail owner here... yes yes you are correct, but for me it was a build that was XC race ready but also fun to just take out... or at least that is what I tell myself

justinfoil (Nov 23, 2021 at 15:07)
Why not sliding dropouts? One of the usual nice things about hard tail single speeds is no need for chain tensioners. Seems like a strange trade-off when the chainstay length isn't dynamic.

mechatronicjf (Nov 24, 2021 at 11:40)
Maybe it has to do with the belt? People talk about belt drive like it's the end of all drivetrain problems, but they need quite a lot of tension to avoid slippage and premature wear. From my experience there's a few commuter bikes that haven't probably implemented the concept. Those bikes have issues getting the required tension and with removing the rear wheel. Not saying you can't design sliding drop outs with these features, just that these designers had these extra things to consider.

Will-narayan (Nov 24, 2021 at 14:54)
Mmh, I guess the frame uses their clamping device for frame with a belt opening.
Here the frame opening is at the rear axle, you remove a bolt and mount/unmount the belt between the chainstay and seatstay. The rear axle clamps everything together (funny I got the same idea a few weeks before seeing their product at the bike show in october).

So with this device sliding dropouts were not an option.

donpinpon29 (Nov 23, 2021 at 13:17)
Love it. Isn't the bolt stays done to change the belt not to be able to take the wheel off? And with such a huge lower pulley no need to protect the frame or chainring. Just use the third wheel to ride over tall rocks

wyorider (Nov 23, 2021 at 13:24)
State of the art drivetrain on an anachronistic frame. Like tele bindings on modern skis. It’s a flavor of kink I just don’t understand.

As a tele skier and hard tail dude, I don't even fully understand it but dang if its not fun with an extra challenge.

The suffering, the challenge, the "being different for no good reason" and the soul of the sport. May I say that the turn is more soulful?

traildad69 (Nov 23, 2021 at 18:41)
Ah yes, the least efficient hardtail ever conceived. Perfect for those seeking out carpal tunnel, clapped out ankles, and monstrous calves.

MorettyBtt (Nov 24, 2021 at 1:11)
IMHO having that fork travel it should be mullet, with a wide rear tire (3' plus), allowing low pressure to get a little of rear wheel bump absorbing. Is how I finally run my Ragley BigWig... much better than both 29', much comfortable and fun riding with 160-130mm dualpositon fork.

galliwasp (Nov 24, 2021 at 7:52)
I like to muse, "If riding a shopping cart is fun, then the often shunned inline skating, scooters, [enter your favorite disliked wheeled contraption here] would be fun as well." Anyhow, this alien beast looks like it'd be fun to give a go, akin to giving a shopping cart a whirl. 'Not sure what its niche terrain would be mind you.

rideitall-bmx-dh-road-unicycle (Nov 24, 2021 at 8:47)
if you ever hang up slightly on the bb now you just get tossed OTB immediately? The point of a gearbox is to get rid of all the shit hanging off the bottom of the bike, not just move it

hardtailpunter (Nov 24, 2021 at 8:47)
As you can see from my user name, I'm a big fan of all things hardtail. But even I think that this is a pretty useless mix of ingredients, from the fork travel, frame material, drivetrain and of course the price.

fielonator (Nov 24, 2021 at 10:13)
Why all the hating? If you've been waiting for more gearbox equipped bikes to arrive and hoping for further development (as i have) then this is great news. I won't buy one, hardly anybody will, but we won't buy almost everything else that appears on the internet. The fact that more folk are going in this direction with their production bikes is great news.

pisgahgnar (Nov 23, 2021 at 13:43)
That dropper though. That has got to be close to minimum insertion and there is barely any drop.

NorCalNomad (Nov 23, 2021 at 18:22)
Make a carbon frame that looks like an straight tubed metal frame...what a fail in term of optimizing carbon's potential. #inbeforesomeonesayslookatthechainstays

wyorider (Nov 23, 2021 at 14:25)
Weight-heavy Performance-crappy But some ht fetishists will still get all hot for this.

IMeasureStuff (Nov 23, 2021 at 13:42)
@sonuvagun: I think there are some reliability issues with shimano xt hubbs. Happy to be corrected.

vinay (Nov 23, 2021 at 15:24)
@draggingbrake: In which gear are you making this comparison? As the POE of a conventional drivetrain are in the hub, the amount of crank rotation between engagement points largely depends on which gear you're in. Silly enough you'd probably care most about the POE in low speed technical moves, typically when climbing at low speed (ratcheting etc) and in a lighter. Seems to me it doesn't quite matter at higher speeds which you typically hit in a heavier gear where the amount of crank rotation between engagement points is small. From what I understand, with a frame mounted gearbox like Pinion and with a fixed (no freewheel) rear hub, the POE (in terms of free crank rotation) is the same across all gears. Is that correct? So most sense would be to compare a conventional Shimano drivetrain in the lightest gear to a Pinion drivetrain and measure how much the cranks rotate between engagement points. Is that still twice as much for the Pinion gearbox?