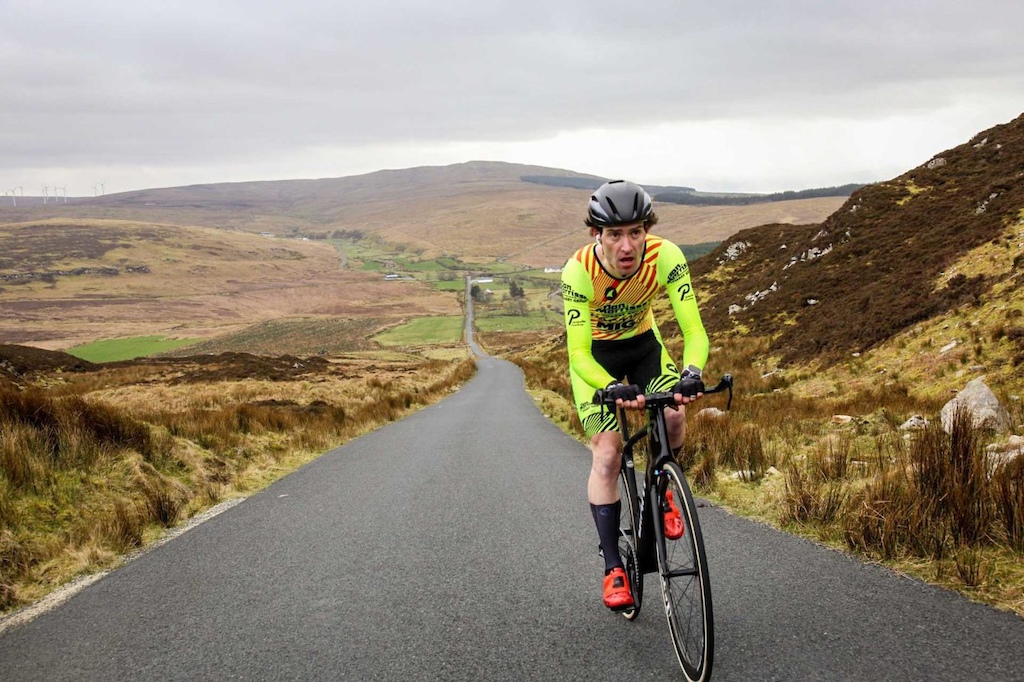 CyclingTips’ own Ronan Mc Laughlin has reclaimed the Everesting world record. The Irishman climbed the necessary 8,848.86 metres (29,032 feet) in a blisteringly fast time of 6:40:54, almost 20 minutes faster than the previous world record of 6:59:38 set by America’s Sean Gardner on October 3, 2020.

This isn’t the first time Mc Laughlin has broken the Everesting record by a considerable margin. In July 2020 the former-semi-pro-racer-and-coach-turned-tech-writer climbed the height of Mt. Everest in 7:04:41 – more than 20 minutes faster than the previous record, set by none other than six-time Grand Tour winner Alberto Contador.

Mc Laughlin’s new record, set last Tuesday March 23, was completed on the same ascent as his first record ride: the climb to Mamore Gap in the northern reaches of the Republic of Ireland. The 810 metre segment Mc Laughlin rode is a nearly-dead-straight section of road that pitches up at a punishing average gradient of 14.2%, climbing 117 metres in the process.

CyclingTips sent a video crew along for the attempt, keep an eye out for the film this week. 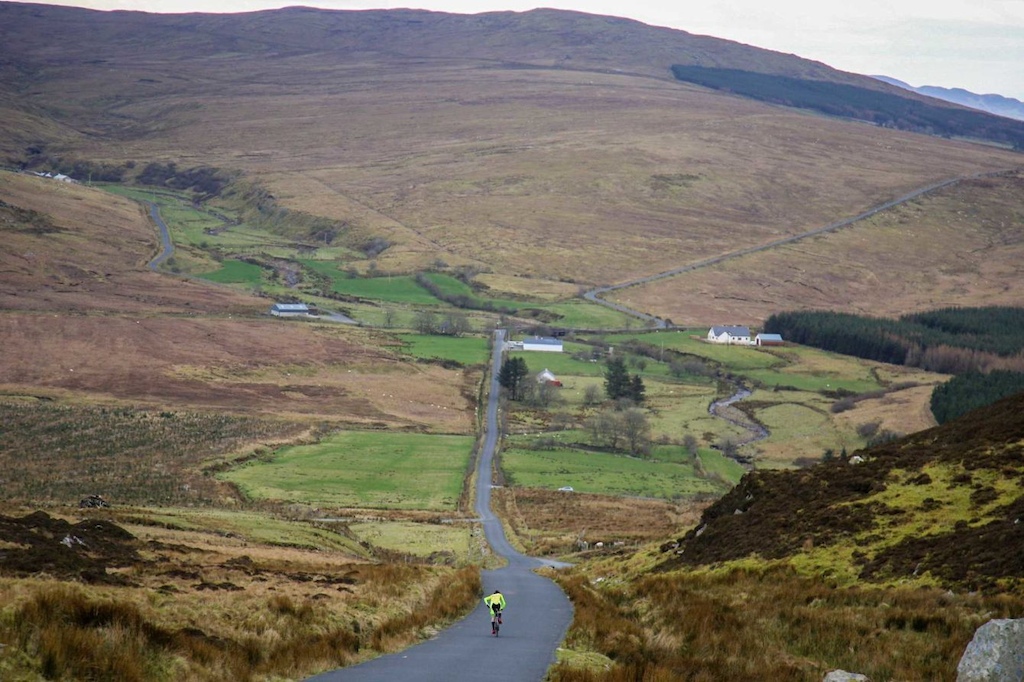 To reach the height of Everest, Mc Laughlin had to complete a total of 75 laps. He ended up completing 78 just to be safe. The elevation gain of his chosen climb was independently verified by geographic data systems company Integrated Informatics and his ride was officially verified as a new record time by Hells 500, the organisation that manages Everesting (headed up by CyclingTips’ Andy van Bergen). 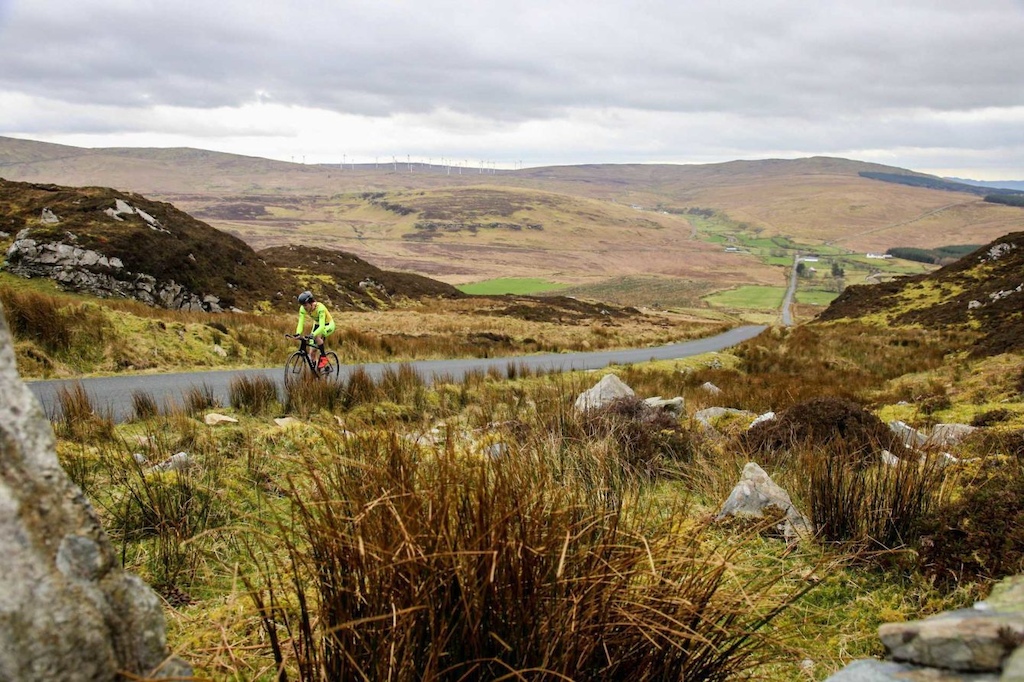 Mc Laughlin had been planning another Everesting attempt in the European autumn, hoping to beat his own record and become the first to complete an Everesting in less than seven hours. That attempt was ultimately postponed due to COVID-19. In the meantime Gardner went and broke Mc Laughlin’s record and the seven-hour mark in the process.

Mc Laughlin trained through the Irish winter, restricted by tight coronavirus lockdowns, and set his sights on another attempt when the weather improved. He waited for favourable weather conditions on the Mamore Gap, and eventually got them. On the day of his ride last week, with temperatures hovering around 10ºC (45ºF), Mc Laughlin had a 20 km/h tailwind up the climb.

Not that he did it easy.

“The ride was tough as you’d expect and I didn’t feel super as I hadn’t got my full taper due to weather forecast changes,” Mc Laughlin said. “But considering the challenge that it is and the pace I was riding, it was never going to feel super for the whole ride and something was sure to go wrong at some point.” 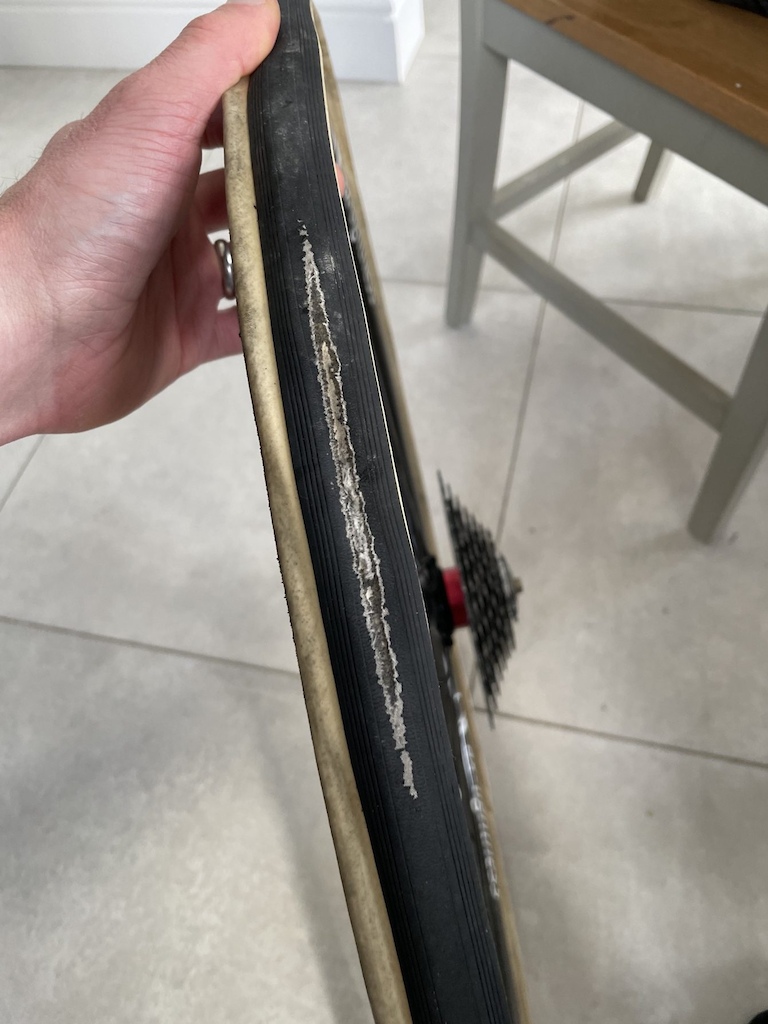 While something did indeed go wrong, it wasn’t his body that let him down. With roughly 10 laps to go Mc Laughlin suffered a near-catastrophic rear-tyre blowout.

Mc Laughlin rode two laps on his spare bike while his mechanic swapped out the wheel on his main bike. As you’d expect, the changeover cost him a little bit of time.

As with his previous record-breaking ride, Mc Laughlin took steps to make his bike as light as he could. “I had lighter wheels, lighter frame, lighter saddle, lighter levers, lighter brakes, lighter cranks, lighter cassette, lighter pedals,” he said. “But then I did add some weight back in with the front fairing.” Last time around he went to the trouble of cutting down his handlebars and removing all but three cogs from his cassette. He didn’t go to such extremes this time – instead he went for a comparatively conservative seven cogs.


Even without that support Mc Laughlin managed to set a very impressive new mark. As ever with Everesting records, the question now becomes: how long will this one last?

seanb4 (Mar 29, 2021 at 18:32)
With all the free time people have because of covid, it wouldn't surprise me if one of these days somebody actually rides up Everest

Tmackstab (Mar 29, 2021 at 19:44)
Cory Wallace did an everest on his mtb in a village by Mt. Everest. Didn't get any coverage really which surprised me.

rider001 (Mar 31, 2021 at 16:56)
I can see that...case a few bottomless crevasses getting through the icefall, a quick gel at South Col, bunnyhop green boots, then launch the Hillary Step on the way down as you slalom spent oxygen cans and carcasses. Or did you mean a hard route?

takeiteasyridehard (Mar 30, 2021 at 7:17)
I bet that was a strategy to not give himself a bail out. It wouldnt give you the option when your brain and body are screaming to do it. I bet it helped keep him focused on what he was doing and what needed to be done.

CamNeelyCantWheelie (Mar 30, 2021 at 7:49)
@TEAM-ROBOT: It was really to prevent the chain from wedging in the spokes when the derailleur low stop screw inevitably wears out from hours of "there must be another one in there" mashing on the shifter paddle.

TEAM-ROBOT (Mar 30, 2021 at 11:42)
@CamNeelyCantWheelie: Definitely been there. "I must have a flat tire. No? Maybe my brake pads are dragging? Nope. I dunno, maybe my hub bearings are shot?"

stevenEK9 (Mar 30, 2021 at 19:47)
@takeiteasyridehard: neither weight saving or wedging into spokes. Cassette would be shifted to keep the chain line as straight as possible for maximum efficiency, cross chaining creates a huge amount of frictional losses

PauRexs (Mar 30, 2021 at 6:34)
@Mtmw: surprising how excellent climber he is.. this it is a heavy weight for a road climber... he reminds me more to Jared Graves on lycra than a roady climber...

subwaypanda (Mar 30, 2021 at 8:12)
@PauRexs: 68kg has been the average weight for the tour de france for the last 10 years. sure a some of the really petite climbers are well under that but many of the top GC guy are right around that. I remember Jared Graves is around 80kg.

jeroenk (Mar 30, 2021 at 13:24)
The 296 was the weighted average. It's a rolling average to smoothen out the peaks and valleys in the powerdata to give an idea of what you would achieve if it would be a steady effort.

Now... that only makes it more brutal, because of the part of time he spent on the descents. He probably did steady 4 minute efforts of like 330 watts on the climbs. 70+ times... Ouch. Those descents take big balls too: From what I heard, the top bit of that climb is the steepest, which makes this a perfect climb for everesting, because it gets you up to speed really fast. Then you bomb down a straight road in supertuck position only to brake late and HARD to turn 180 degrees and ride back up again. I cannot imagine how that must feel after 6 hrs.

mountainsofsussex (Mar 30, 2021 at 0:44)
All that effort to weight save, yet there must be a hundred grams of hair there, flapping about, messing with his aero...

DoubleCrownAddict (Mar 30, 2021 at 0:50) (Below Threshold)
Some type of doping control would also help legitimize it, though not implying he was cheating in any way. Contador though..

GeeHad (Mar 30, 2021 at 1:19)
I agree. He's spending about 75% of his time in the saddle with a decent tailwind. Not to discredit the rider, he's doing something I can't do and I don't know the wind conditions for the previous records. But you do need some rules to stop people from taking the piss.

TheJD (Mar 30, 2021 at 2:30)
@GeeHad: There are rules in place, they just don't take weather conditions into account making them part of the game. Josh Poertner talked about it some time ago in his Marginal gains podcast episode on Everesting.

GeeHad (Mar 30, 2021 at 3:27)
@TheJD: Cheers, will look it up. Are they maintained by Hells 500? And to reiterate, I'm in awe of this guy's record. I'm not saying he's taking the piss. I'm saying that there needs to be rules in place to prevent lesser riders taking records like his in future.

pasales (Mar 30, 2021 at 7:07)
@woofer2609 good thinking, but even time trials at world Champs and in the world tour don't control for wind speed. I don't there is a way. Even there was an established maximum wind speed riders would have to get as close to that number as possible, which involves the same amount of luck.

Ginsu2000 (Mar 30, 2021 at 12:05)
@pasales: with road time trials in stage races like TdF it's accepted that conditions will usually be similar enough to close competitors, given that the start order is typically determined by the current GC placings. It is possible to have a sudden change in conditions, or to have a rider that's much lower on GC who is a time trial specialist, and get a benefit relative to other riders. However, that's not much different than DH where strange things can happen sometimes with start orders and changing conditions. The key point is that in both cases, the riders who are reasonably expected to be competing most closely have their start times grouped tightly.

loamy (Mar 30, 2021 at 1:56)
He is sock doping. The tops of his socks are way closer to his fibula head than his lateral malleolus. Max height is equidistant between the two.

NoahColorado (Mar 30, 2021 at 7:15)
Can you imagine Everesting while having to listen to Everlast on repeat? Then you really might know what it's like to sing the blues.

Richridesmtb (Mar 30, 2021 at 3:04)
Legitimate question. How much more energy would be required to Everest on a mtb on trails than a roadie... on road... of course?

cky78 (Mar 30, 2021 at 6:47)
I have asked buddies that ride road/gravel, and mountain bikes about this. They have said that riding road on a mtb is roughly 30% more difficult than on a road bike... That's flat asphalt... One can only imagine that Everesting on a MTB would be at least 50% harder? I do recall a dude did Everest on his SC Tallboy I think? Might be worth while finding out, and comparing data...although they be apples and oranges to an extent.

cgreaseman (Mar 30, 2021 at 10:33)
Arguably, on a mtb you could more comfortably turn up steeper roads to cut down the time needed... but since you'd be pushing heavier tires and wheels, probably considerably more effort. Doesn't really matter though, cause if it was faster then that's what these record attempt peeps would be doing.

TomsiR (Mar 30, 2021 at 11:09)
I did one a couple weeks ago at my local trail center. It took me 20 and a half hours. Toughest thing iv ever done thats bike related for sure. Its was my wrists that hurt the most at the end tho, no amount off suspension would of helped by the end of that long a trail bashing

JosephDunbar (Mar 30, 2021 at 19:15)
20 kph tail wind definitely helps. Actually it’s a huge advantage. Not taking anything away but.... The whole Everesting thing is kinda boring. So you can climb the crap outta a hill. Ok


Ok then. So his seatpost, stem, and handlebars were the same? Wouldn't "...built a new bike for the attempt..." be more accurate?

jclnv (Mar 30, 2021 at 8:06)
@jenksy: Bingo. Without at least knowing Ronan’s weight it’s a totally pointless metric. Which is why we have W/KG. The downvotes just shows how dumb the Pinkbike masses are.