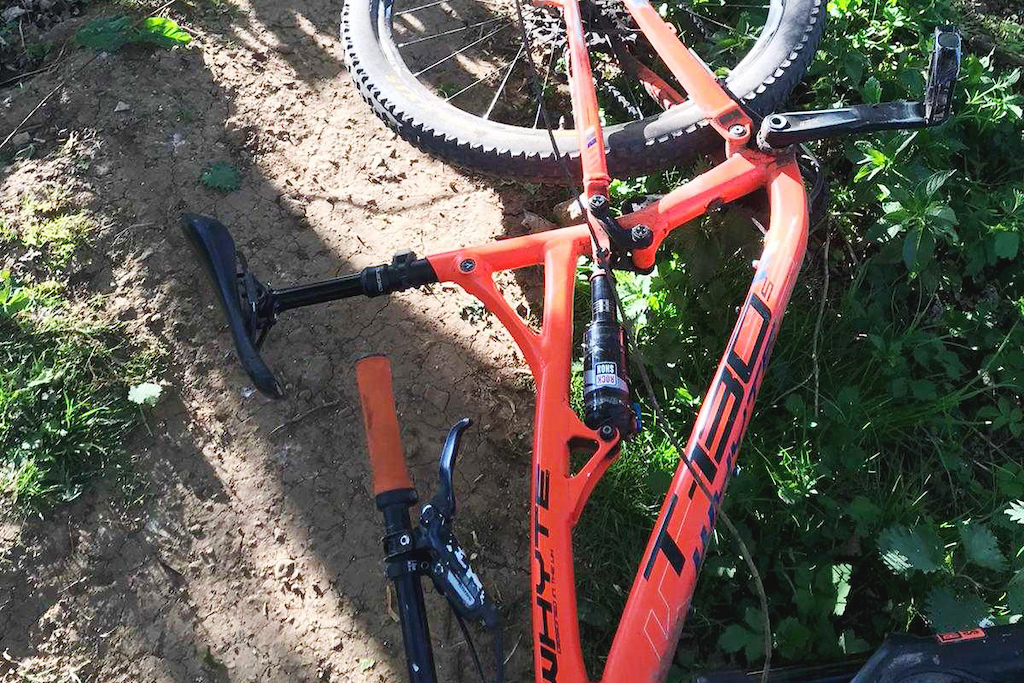 West Yorkshire Police are appealing for information after a cyclist was injured by a wire which was "deliberately" placed across a trail.

At around 5:30 pm on the 20th of April, a 52-year-old man was riding with his son at Wothersome Woods, Bramham when he rode into a thick metal wire. The incident resulted in the rider being knocked off his bike while he also sustained a wrist injury from the wire. 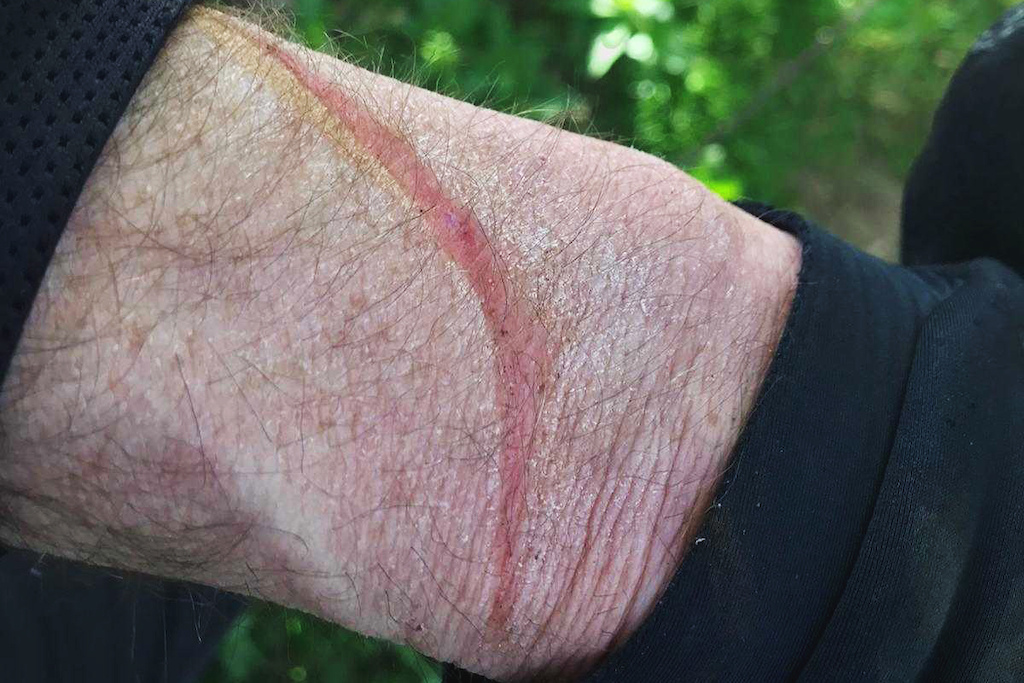 If you have any information about this incident then contact Leeds District Wildlife and Rural Crime Team at Garforth Police Station via 101 quoting crime reference 13200196203 or online through the West Yorkshire Police Live Chat.

dglobulator (Apr 23, 2020 at 8:15)
Unbelievable!!! They need to re-open the retail parks so all these nasty bastards can go back to shopping and eating Nandos on a weekend instead of trying to reclaim the country side. Twats!

savmeister (Apr 23, 2020 at 7:45)
Found loads of trees across my local trails in the last few days! The sooner all these "walkers" go back to sitting on the couch watching TV the better

CustardCountry (Apr 23, 2020 at 10:37)
This has been happening for years. Someone was prosecuted for it a few years ago in the UK I believe

b45her (Apr 23, 2020 at 12:50)
@CustardCountry: its increased exponentially since all the "hour of exercise" fatties have started wandering up the hills, i've never seen so many people on the mountain.

HankBizzle (Apr 23, 2020 at 16:58)
@b45her: Same where I live, I have never seen another person in the local woods where we ride, other than other bikers obviously. But in the last few weeks it's full of walkers and dog walkers. And they give us dirty looks like we shouldn't be there. Who do you think built the feckin trails your walking on chubs! Starting to become a common occurance by the looks of it.

jaame (Apr 23, 2020 at 23:27)
@HankBizzle: It's amazing isn't it? I walk, run or cycle down the same track to get out of town pretty much every day of the year, and I've had to stop using it. I would usually see maybe ten other people, twenty on a weekend. Since lockdown it's been about 800, most of whom look like they haven't done any exercise since '89.

markbe (Apr 24, 2020 at 5:17)
@jaame: its mental everywhere i used to head up to the woods to get away from people and now ive got to head to town to avoid them as the woods is rammed with people giving me the hairy eye for riding a track i built twenty years ago!

john260164 (Apr 24, 2020 at 6:48)
Covid tourist fat car driving wankers walking their alsations off the lead shouting obscenities at you as you ride past them, unable to give them a warning as you just joined the track they're on at an unsighted bend. Go home you selfish c*nts!

jaame (Apr 24, 2020 at 13:22)
@markbe: hilarious! It's amazing how people seem to have this possessiveness over tracks they've literally just walked on for the first time!

Shit dogs are the worst ! bastard ankle biters chasing you coz its the first time they've left the back yard

Patrick9-32 (Apr 23, 2020 at 7:25)
This should be treated as attempted murder. This malicious son of a bitch was trying to kill someone completely indiscriminately.

Ben8000 (Apr 23, 2020 at 8:27)
If you find a wire across a trail, please please do not touch it until you have spoken to the police. The call taker may not be aware that this would be such a serious offence. Please mention this will likely be attempt GBH and above. There maybe forensic evidence that can be gained from the wire but not if it's been removed or tampered with.

nick1957 (Apr 23, 2020 at 12:59) (Below Threshold)
have a little think about your statement . just remove it job done . there are a lot of fucked up people in all walks of life put one away ,another will step up. dont get it out of proportion. play the percentage game you will be ok

drfunsocks (Apr 23, 2020 at 22:43)
@cragus-t: im with you on this, they never tend to catch these people. Leaving it up is a very bad idea though. Only a matter of time until someone else gets hurt.

Ben8000 (Apr 24, 2020 at 5:52)
I was never suggesting leaving it up and going home. I thought that was so obvious it did not need spelling out. Clearly not. If you find a wire, speak to the police whilst you are there, find out if they can and will look at it, or give you instruction on how to remove it whilst preserving evidence. If they can't then obviously take it down. If you want to just remove it, not involve police and ride on, fine. Personally I would like to catch the dangerous imbecile who is literally risking mine and others necks.

fatduke (Apr 23, 2020 at 7:20)
I'm dreading going back to local woods to see if anything thing has been done to the trails there. Sounds like angry Bramham middle class walkers taking some time to be extra dicks

w0dge (Apr 23, 2020 at 9:17)
Doesnt bear thinking about does it? Just utterly despicable behaviour from something at the bottom of the gene pool.

Davec85 (Apr 23, 2020 at 9:29)
"This wire had been deliberately placed across the path with the aim of causing injury to cyclists or walkers"

Not sure it was, it was placed with the sole purpose of injuring cyclists.

jaame (Apr 23, 2020 at 23:24)
I took that to be a nondiscriminatory statement where the police try to pretend it wasn't aimed at a particular group when obviously it was.

jonlees (Apr 23, 2020 at 7:20)
I hope whoever does this has to do community service rebuilding Steel City DH Track. JK I hope they get prosecuted

McArdle (Apr 23, 2020 at 10:38)
And shares a cell with a gent with a huge cock that enjoys surprise midnight romps with other gents

motojames (Apr 23, 2020 at 12:07)
Had a few reported cases in south wales in the last week. On footpaths, one case near ish some off piste trails , znd others at a popular walking spot. Apparently using fishing line. I would like to think that its a moronic corona virus vigilante who thinks that by doing this they are stopping people using these paths and 'protecting the nhs' when in reality they potentially causing life threatening injuries. I say i would like to think that because the alternative is that someone is just purposely trying to harm people, Theres also a load of wild fires being started all over the hills where trails are, in the afan valley and surrounding areas.

muddytreker (Apr 23, 2020 at 10:23)
Heated altercations with walkers may have consequences for the next rider, its no excuse mind

jjhobbs (Apr 23, 2020 at 11:53)
Exactly! Try and engage, not rage. There probably pissed right off about something, and it will be to do with bikes.. plenty of arse holes mind, on 2 wheels

kmcd21 (Apr 23, 2020 at 12:28)
If I seen someone setting up death traps like this there only leaving that forest/mountain on a stretcher

kmcd21 (Apr 26, 2020 at 11:12)
A fair and valid statement in an ideal world. The facts are this deranged act is becoming more prevalent and the offenders are getting away with it. When it comes to riding trails with my kids and this is the risk facing them and others I would act accordingly. Doing nothing just allows for it to continue unabated.
@ermoldaker:

JoelAllport (Apr 24, 2020 at 3:35)
I'm constantly picking up broken glass off track in my local. Could obviously be people drinking beer and chucking bottles but I don't really see people drinking there, plus some of the places I've found it are out of the way of walking paths etc.

JoelAllport (Apr 24, 2020 at 5:43)
@CyClErCg: it is a shame because the tracks are awesome and a few very local children are keen riders riding it regularly so they're even putting them at risk

renno (Apr 25, 2020 at 1:17)
It seems that there are a group ov people out there who have no interest in the outdoors or mountain bikeing or keeping fit in the wild so thay reunin it for thos ov us who do get a life and grow up you idiots hope the rider is doing ok and are both safe