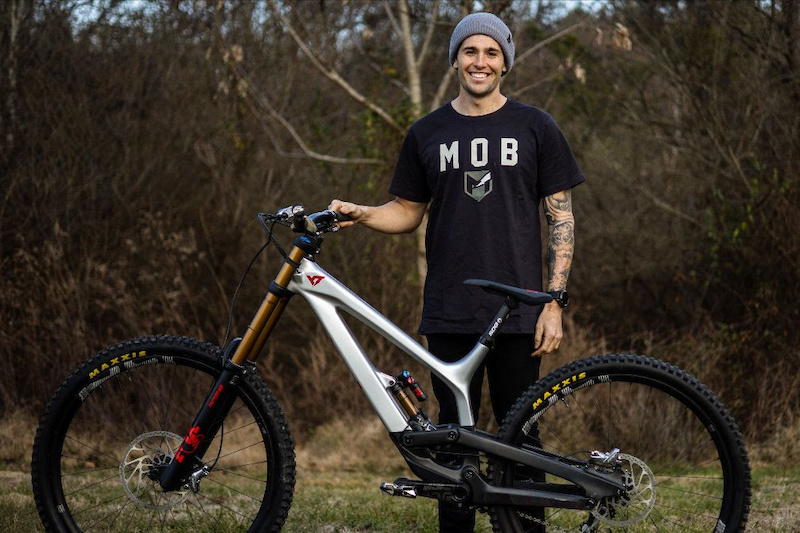 The YT Mob is excited to announce that 28 year old Dakotah Norton of Tennessee has signed with the team and will race alongside David Trummer (AUT), Oisin O’Callaghan (IRL) and Guy Johnston (NZL) for the 2021 season.

Despite being a late comer to the sport of downhill racing, Dakotah has already scored a string of top ten results including two World Cup podiums, and earned the respect of his peers as well as many in the industry. His first podium came in 2018 at World Cup Round 1 in Losinj (CRO) and his most recent was in Lousã (POR) at the final round of last season.

Dakotah will be racing the YT TUES Pro Race which will be built up with all of the top components run by the team. He’ll be bringing US based mechanic Josh Patton onboard with him as well.

vader4runner (Jan 7, 2021 at 12:05)
@Rainozeros: I am not from Michigan but I ride up in Marquette and Copper Harbor which i wouldn't classify as DH but definitely some the best trails in the midwest. Copper Harbor is a vibe that every mountain biker should experience.
ride.diamondback.com/next-exit-copper-harbor

lbsteinm (Jan 8, 2021 at 1:40)
@Rainozeros
Having grown up in Michigan we have the following.
en.wikipedia.org/wiki/Porcupine_Mountains
Plus one of the largest (XC) races in the US is in Traverse City, Michigan. The Iceman Cometh.
www.iceman.com

Plus Michigan has some really good ski resorts.
www.michigan.org/article/trip-idea/comprehensive-guide-ski-resorts-michigan

Rainozeros (Jan 9, 2021 at 22:52)
@lbsteinm: thanks, good to know. I have only been in Berrien Springs and Chicago and biking was pretty much flat out all the time. But I have seen pictures of a ski Resort. Anyhow, it always seems cool to me when a rider from the flatlands rips as hell

chriskneeland (Jan 7, 2021 at 7:47)
Gotta feel for Neko. It's like Dak is now dating his ex and bringing her to all their double dates.

Tandaman (Jan 8, 2021 at 4:25)
I feel like this can't be upvoted enough! They both moved on but the attachment is still there lol

BearOnATrail (Jan 7, 2021 at 6:11)
We have met and rode with him on multiple occasions, such a good dude and well deserved!

steezysam (Jan 7, 2021 at 6:37)
met this dude at Snowshoe and he was such a highlight. so nice, open, and interesting to talk to—he makes me proud to be a DH fan in the US. psyched to see him on such a solid program

HowieDavis (Jan 7, 2021 at 6:24)
Cheers to Dakota! The YT Mob is always entertaining and hopefully its top support for him and clearly deserves it! Can't wait to watch some RACING!!!

jcc0042 (Jan 7, 2021 at 8:49)
He seems to be one of those people who wakes up everyday stunned that he gets to ride a bike for a living. His stoke is infectious, and watching him hit sniper lines at Windrock gives me chills (check out his inside line on the step-up:
m.pinkbike.com/news/race-report-perfect-conditions-for-the-downhill-southeast-series-at-windrock.html.).

I hope that when he retires from racing, which will hopefully be a long time from now, he continues his "D!ck Tugs" series and becomes the South's Remy Metailler.

kleinschuster (Jan 7, 2021 at 6:53)
Question for anyone in the know regarding mechanics for pro teams. When a rider is claimed as "bringing along" a certain mechanic are they responsible for paying them? Or do teams give riders freedom to pick the mechanic of their choice and then foot the bill? I know some combinations of riders and mechanics are essentially married while other mechanics seem to just stick with a team long term independent of the riders.

drunknride (Jan 7, 2021 at 10:40)
It kinda shits on the mechanic phrasing it that way right? I'm bringing along my bike, my underwear and this dude Jim.

kleinschuster (Jan 7, 2021 at 11:58)
@drunknride: I don't think it shits on anyone. Simply stating he had a choice on who his mechanic was going to be. My question is simply who writes the mechanic's check? Is it part of a package with the rider, does the mechanic negotiate their own deal with the team after being chosen by the rider, or if a rider is requesting a specific mechanic are they on the hook to pay them?

kleinschuster (Jan 7, 2021 at 12:08)
@giantwhip: Who knows what a newer rider is actually bringing in that's definitely part of the equation on why I'm asking who pays. I'm sure there are plenty of people willing to have their travel and living expense covered while they're on the road with a very small additional salary for the ability to have such a job and see the world. I know a few motorsport mechanics that just want the vagabond lifestyle covered and go with whatever is available on a constantly evolving path with little compensation relative to the amount of hours they actually work. I'd think many race bike mechanics could have a similar mentality.

maxnomas (Jan 7, 2021 at 17:45)
@drunknride: once you get a certain level in a job, and the competition is offering you a job, you can answer with an “Ok but let me bring my team” or “let me build my team” in this case, a rider and a mechanic are a sub-team within the team, and a good one can no doubt be a solid and consistent one anda a bad one a disaster

Looking forwrd on seeing how the monthey perform, solid team no doubt

drunknride (Jan 7, 2021 at 21:29)
@kleinschuster: I actually would like to read something about this process from a few mechanics that have experienced this. My initial response was just pure sarcasm and f*ckery though

andwit (Jan 7, 2021 at 6:17)
Hell Yeah! Well deserved. Met him once at breakfast before a worldcup at Leogang. A nice and grounded dude.

PTyliszczak (Jan 7, 2021 at 6:25)
Awesome dude. He is often in NC hanging with Neko and Luca and I've ridden a few times with him at the bike park. Chill guy and sick rider.

nolimit (Jan 7, 2021 at 6:31)
Yeaah super stoked for Dak! Met him riding in Santa Cruz and he's not only a great rider but also a super nice guy. Well deserved.

padirt (Jan 7, 2021 at 9:26)
Can’t wait to see him ride the tues at the rock! Tennessee is the hotbed of American downhillers in a matter of a few years.

lalientoxc (Jan 8, 2021 at 6:32)
Very very stoked for this guy!! He deserves all the support, I was kinda worried ab him not being able to sign w anyone before the season but I’m glad to see him in such company

jmhills (Jan 7, 2021 at 6:24)
This is great. Devinci is cool but they probably could not match the infrastructure required to race in Europe like a Euro brand can

Eastern-States-Cup Plus (Jan 7, 2021 at 8:41)
Congratulations Dakotah. Keep up the great work and dedication!

nlibot33 (Jan 7, 2021 at 11:09)
Cheers to Dak well deserved I was watching his and David last season, watch out people these guys are climbing slowly on the charts and flying under the radar.

bretttippie Plus (Jan 10, 2021 at 23:40)
Congrats to Dakota and YT! He is a cool guy who has given me great interviews for years at CWX and seems to be going faster and faster every season on the World Cup! Rip it up bud!!

nmcmillan (Jan 8, 2021 at 21:47)
Is he gunna race that freeride bike or are they making a downhill bike soon? Asking for myself.

stefkrger (Jan 7, 2021 at 9:28)
Dude seems genuinely nice judging by the media. Seems like YT is trying to get rid of the bad boy image considering who they have been signing recently.

suspended-flesh (Jan 7, 2021 at 10:36)
Or maybe they just sign the most promising available rider they can strike a deal with?

Majstr (Jan 8, 2021 at 8:23)
Kinda offtopic:
Have some unofficial news that Trek will be releasing the new Session this year, also a high pivot.
Post a Comment