After many years of riding and shooting, we begin to search for new ways of doing things. It's certainly not that what we do is boring by any stretch. However, one can find him or herself complacent; not as passionate about things that once intrigued you. You begin to long for a new possibility, challenge, and scenery, often looking for some kind of substitute for the everyday routine. Since we were looking for something new we took the phrase "night and day difference" to heart, creating a new world of darkness to play in. We entered an alternate world where light cut through dark like a knifes edge and smoke and mystery were around every corner. 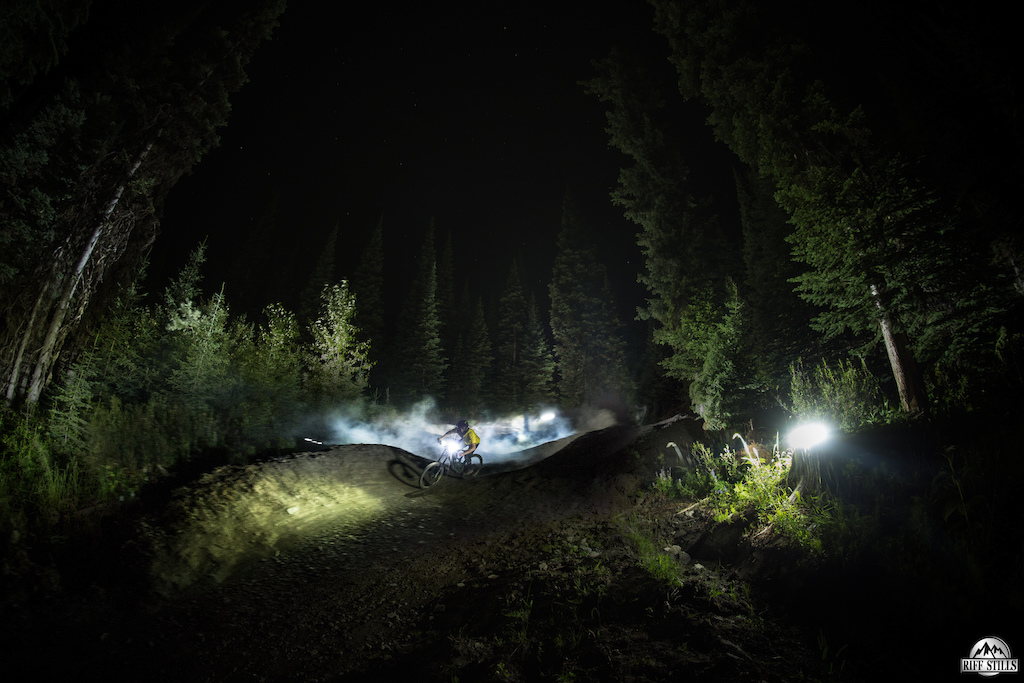 High speed into the unknown
Sun Peaks Resort played host to our shoot. The contrast of riding the bike park during the day to night was startling. Nothing appeared as it once did only a few hours ago, and everything outside the safety of our carefully placed light rigs was black and imposing. There is something frightening about starring out into the pure dark not knowing if something might be staring back. However, it did give us exactly what we were searching for in that it was as though the entire park morphed into something new at night. 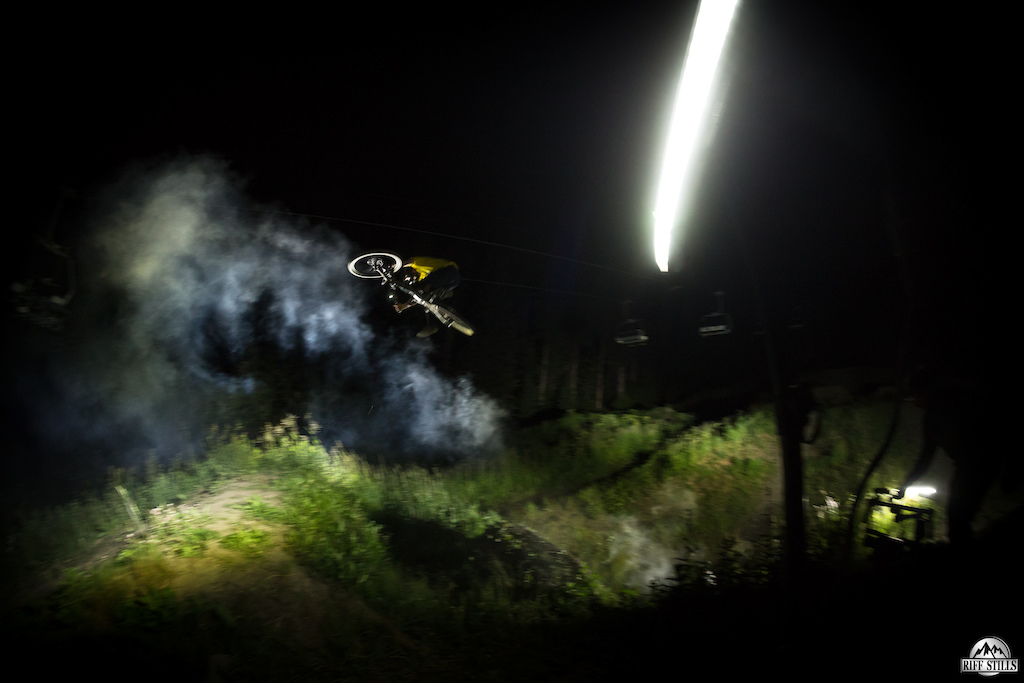 Jumping at night was a new and interesting challenge 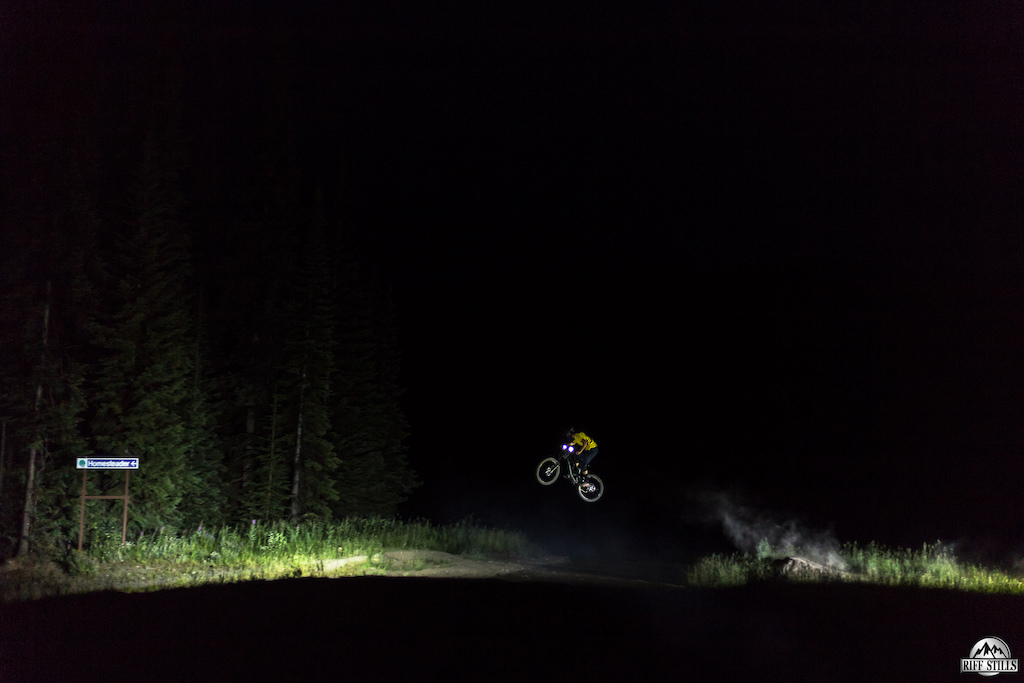 Going the distance
If we had come in search of a challenge we had found it. Set up for shots was grueling, and required us to cart in stands, light bars, car batteries, hundreds of feet of electrical cable, generator, smoke machine as well as our camera gear and Brendan's Commencal Furious. We worked tirelessly from 9pm to 4am most nights, often watching the sun begin to illuminate the dark of night as we finally lay down to sleep. We had support from Sun Peaks Resort by the way of extra hands and first aid staff which allowed us to move through the night more freely and greatly assisted us in our efforts. 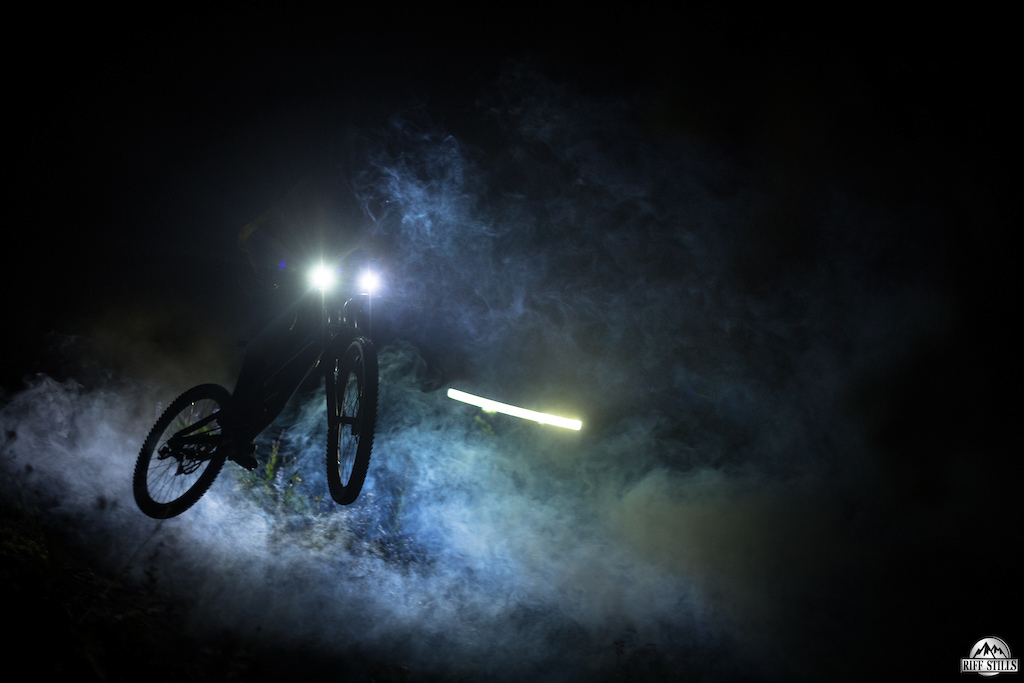 Appearing from the smoke 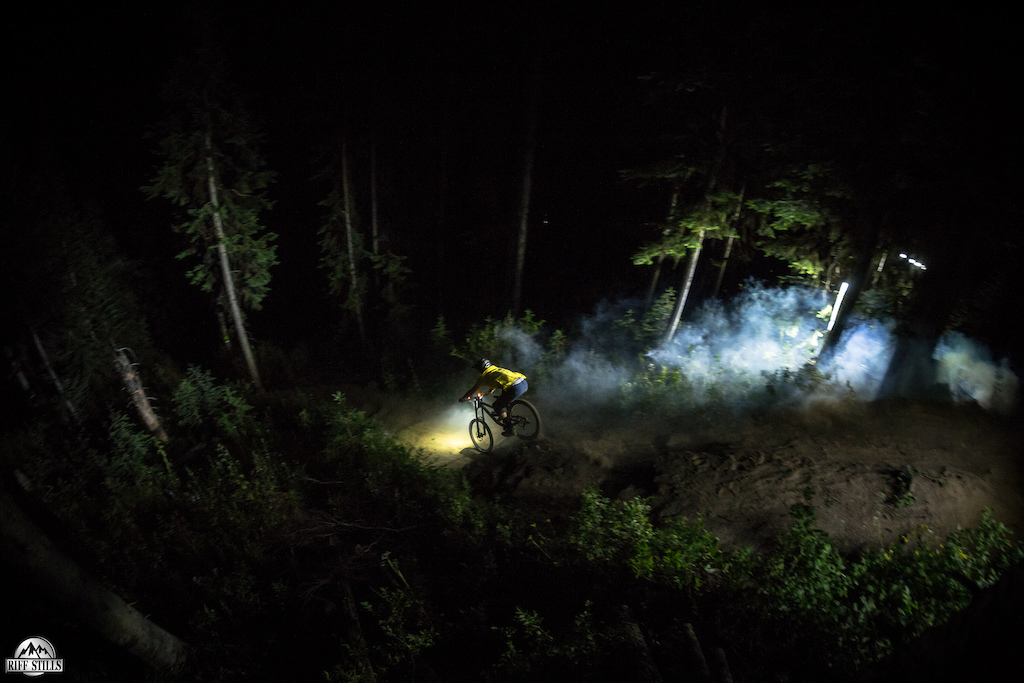 It all looks different at night 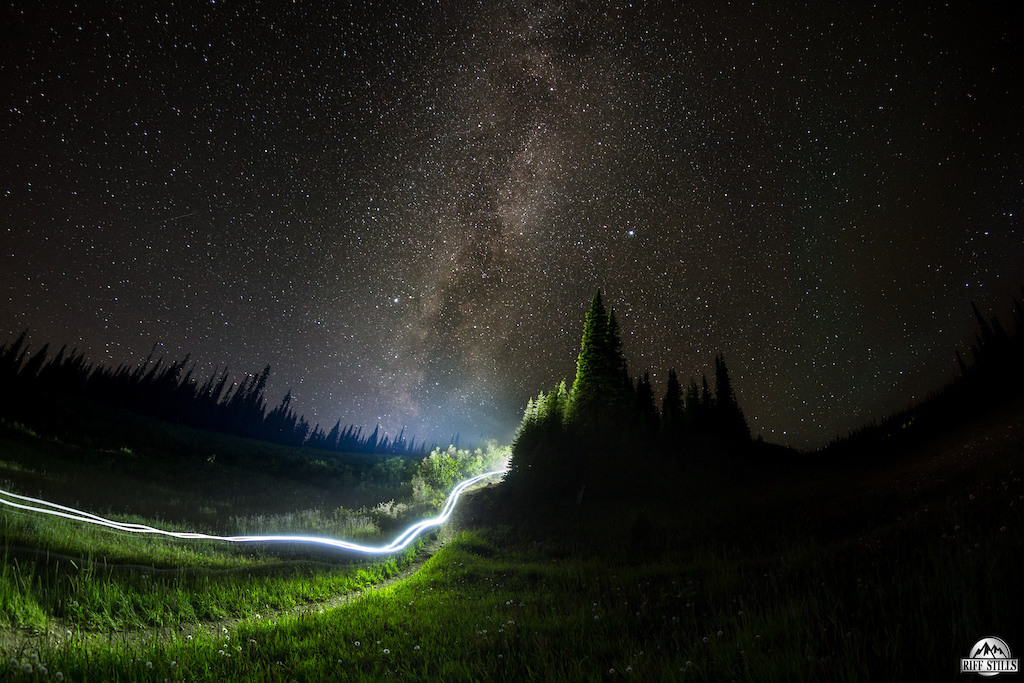 Howey painting the forest with light
The stark contrast of powerful lighting and the dark of night granted us a lot of interesting opportunities to obtain shots that were much more visually stunning than any normal shoot. We could paint the forest with light and smoke where and when we chose, setting the stage for Howey's legendary style to really be highlighted. Howey rode as though it were day even though he was often unable to see where he was going due to the smoke and the sudden contrast from bright light to dark. By the end of the shoot, it was as though we were all suffering from extreme jet lag, and it seemed as though walking around during the day was unnatural to us, but we had successfully completed what we set out to do and it was now time to return to our normal world once again.

JourneymanDan (Aug 12, 2017 at 3:42)
I have been out at night in pitch black surroundings and had the exact same thought about what might be lurking. When you throw in a mountain bike and a couple of lights it doesn't change much as the speed increases and your vision is still very much close proximity, yet this edit creates a nicer atmosphere. The flashing lights at the beginning, the smoke machine, the hot-boxed pod and the emerging Brendan all gave off a 'Back to the Future' slash 'Bill and Ted' vibe and they were awesome movies. I found the wording of the following explanation really helped keep to the mood post video as well which had me bubbling over. Along side the photo of Brendan emerging from the smoke, conjuring flashbacks of 80's alien movies, and the long exposure shot, which is new to me and still so amazing, I found this a real atmospheric piece and totally enjoyable.

Lone-Wolf-Productions Plus (Aug 12, 2017 at 5:21)
Wow thanks for the in depth review. Glad you enjoyed it. That's exactly what we were going for. Strange and stunning imagery was the goal.

patrickbatemanworldtour89 (Aug 12, 2017 at 15:34)
@Lone-Wolf-Productions: That shot at 1:35 is awesome, would be day or night. I probably re-watched that twenty times after the first watch-through. Thanks for the inspiration and great video