Polish mountain biker Dawid Godziek landed a quadruple tail whip yesterday, September 12, at the Audi Nines MTB event in Birkenfeld, Germany. The trick, an aerial maneuver in which the rider spins his bike around the handlebars four times while airborne, is a first in the world of mountain biking.

“I landed the triple whip pretty easy, so I decided to try for one more,” said the 24-year-old professional mountain biker from the village of Suszec in southern Poland. “I hadn’t been thinking about this trick at all, but the jump here at Audi Nines turned out to be the perfect jump for it. It’s huge and there’s a lot of airtime to do it.”

Godziek landed the trick after four tries on the Progression Big Air jump, a special feature designed specifically to help mountain bikers push their aerial tricks to new heights. The massive jump features a nearly 5-meter-high takeoff ramp and launches bikers over 10 meters off the ground, helping the event live up to its motto of “Send it to the Moon!”

“The special thing about this event is that we don’t have any pressure to put our run together in three or five tries,” said Godziek. “We have a few days to do our best, which is really cool.”

“It’s a pretty hard and pretty big course, which is new for me,” he added. “But I finally landed something big, and I’m really stoked.”

The Audi Nines MTB is an invite-only media event and contest for professional mountain bikers, held this year for the first time in a stone quarry in the Hunsrück mountains of Germany’s Rhineland-Palatinate region. Supported by Bikepark Idarkopf, the event has attracted some of the world’s top mountain bikers to this spectacular venue to participate in an innovative video contest, which gives riders one week to land their best tricks and runs in front of running cameras. In addition to the Big Air jump, the venue also features freeride and slopestyle mountain bike lines with huge drops, jumps and other special features. 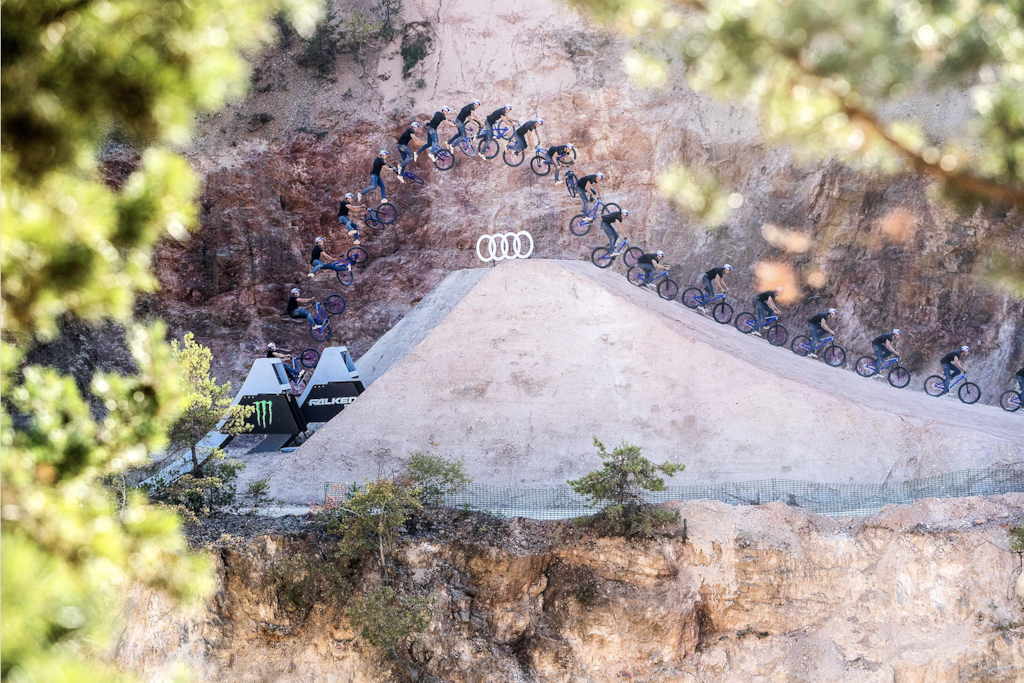 I can't even wheelie.

Kramz (Sep 14, 2018 at 4:27)
I gave up a long time ago. I used to be on a professional-ish level, thinking, "oh if I just try my best, and ride every day, I could get a 15 second segment on a video or something". Some people can just do it, like it comes naturally to them, even my friend who was arguably better than me, was absolutely terrible compared to a pro. Look at an Olympic gymnast floor routine, for me it's just like, "I cannot do that shit, some people can, I cannot in a million years of infinite practice".

rippersub (Sep 13, 2018 at 9:16)
If you don’t need to be on your bike when you land to claim a world first then I’m basically Travis Pastrana considering the shit I’ve done without my feet on the pedals.

adamlaycock (Sep 13, 2018 at 10:18)
I like how 10 years ago, you could ball ride an entire contest run and itd still count, but nowadays if you dont land on every single one of your pedal pins, people say it doesnt count. Progression

VictorvanDort (Sep 13, 2018 at 12:20)
He landed it and rode away. Just for few miliseconds his feet touched the ground. So I think he has that WFQTW ! CONGRATULATIONS Dawid !! Zajebioza!

theredbike (Sep 14, 2018 at 16:31)
@scott-townes: Why do you need to do a dub cork 10 to have a opinion in the comments. It took me years to learn whips and i didnt count them until i was able to land on the bike. Why is a Redbull athlete allowed to cut corners and I'm not. Why can a article written by The Audi Nines about themselves go unquestioned. Somebody else is going to do this trick properly but they won't be able to claim their worlds first because some yuppie company wanted to dab their foot in the NBD book.

finnrobinanders (Sep 13, 2018 at 9:45)
Watch it in 0.25 speed. His foot got really close but it didn't actually touch. I still think he should have properly landed it on the pedals though.

Regardless - this is badass

taquitos (Sep 13, 2018 at 11:07)
@b-wicked: Then you haven't been watching slope for that long. Pedal slip vs. full on foot plant are two very different things. Could it be cleaner? Yes. But was it landed? Also yes.

tkrug (Sep 13, 2018 at 11:28)
I feel like this is a topic that is only fairly evaluated by his peers. Unless I have missed something and you are all professional, or on your way to being professional slope/freestyle competitors.

taquitos (Sep 13, 2018 at 11:58)
@tkrug: I'm definitely not pro, but I've been following slope since the beginnings of Crankworx and I've seen things much less clean considered landed.

I feel like I'm taking crazy pills or something with all the comments saying he touched the ground.

cyclo-maniac (Sep 13, 2018 at 18:07)
Not sure what the officials would say, but in my book he made it. It clearly isn't clean and wouldn't earn full points, but I reckon he can still claim the first quad-tailwhip.

And she just may win a few races too.

johntaylorphotos (Sep 13, 2018 at 12:15)
Four? I did six the other week, unfortunately the batteries were dead on the video camera and the magnificent feat wasn’t recorded.

Seriously, I’m like the guy below me and can’t even wheelie more than a couple of meters. I suspect the only thing I have in common with this guy is owning some NS handlebars and rims.

I bet he couldn’t have produced a 100 odd page Excel report in the record time I had to produce it this week though! Oh dear, my life went very wrong somewhere...

forkguardian (Sep 14, 2018 at 8:48)
it's all about nesting that VLOOKUP in an IFERROR. maybe i'll go for a quad nested formula next week.

pooceq (Sep 14, 2018 at 18:44)
@underhawk: VLOOKUP is pretty inefficient. Combination of INDEX and MATCH tends to work faster and it's much more flexible, especially when combined with tables.
You get extra nesting using those, which is popular with ladies ????

AWDxTY (Sep 13, 2018 at 11:47)
All these sour comments coming from people that couldn't even hit that jump. Let's see all your videos of YOU progressing the sport.

watchmen (Sep 14, 2018 at 2:55)
Technically it's cheating.
Spinning the bike that fast,that many times creates extra lift.If he can increase the rotational speed 10%-15% then he will actually be able to hover on flat ground.
Nicolai is working on a hop 1800 as I type.
It's pretty basic physics really.

Dropthedebt (Sep 13, 2018 at 13:09)
the BBC are catching up with reporting MTB recently. Some articles when Rachel or Tahnee have won a WC or WChamps & we can watch reruns of the Worlds on demand via BBC iPlayer.

johntaylorphotos (Sep 13, 2018 at 14:34)
@Dropthedebt: Yeah this is great to see, as one of the best women’s mountain bikers of all time it’s a travesty that more people in the UK don’t know about Rachel, if this was an Olympic sport she would be a household name, I hope one day she and Tahnee get the wider recognition they deserve, if they are interested or bothered! Get Mike Bushell from Breakfast TV on a downhill bike!

he has been on a bike a few times. fair play to Bushell, he does get stuck in.

watchmen (Sep 14, 2018 at 10:42)
@Session603: I feel this comment has gone under appreciated (I laughed so hard I herniated)......I'm not sure whether this is a positive or negative reflection on PB commentators.

thought at least the mtb comuntity wouldn't be as stupid as the rest of the world is.. sad times

steezer (Sep 14, 2018 at 2:07)
Nicholi is beginning to feel the pressure! he'd better pray David doesn't turn up at the diamond events next season...

dazzhotchkin (Sep 13, 2018 at 16:44)
"The trick, an aerial maneuver in which the rider spins his bike around the handlebars four times while airborne". Thanks for that, I didn't know what a tailwhip was...

kelvinbenedictmtb (Sep 14, 2018 at 11:48)
Could you imagine being one of the special snowflakes that comment and say it doesn't count because of the possible foot dab. Fucking disgraceful. I hate being negative but this is getting on my nerves.

HARv379 (Sep 13, 2018 at 20:27)
Dear Slopestyle dudes, This trick may be hard, and require extreme precision. But it looks utterly stupid. I'd rather see a stylish whip. Sincerely, Asshole.

Does it still count when putting your foot on the floor

I think he's done it properly, that's why they publish it or am i wrong ?

theredbike (Sep 14, 2018 at 16:17)
@R4dz1k: Well this is a article from The Audi Nines about a Audi Nines event. Im guessing they will publish anything that brings them attention. I don't count putting your foot down. I would catch my whips with one foot for years before i figured them out and if i said otherwise my peers would defiantly call me out. If you ask me people need to keep the integrity of the sport in check by preventing these sponsors from stamping their name all over the history books.

theredbike (Sep 13, 2018 at 11:07)
This is so lame. First off this is a post from The Audi Nines about themselves. Second he touched the ground. Clearly you can see the sand move. All of these yuppie sponsors want to call out world first and have flashing "WORLD FIRST" intros then disrespect the sport by claiming something that is incomplete. I don't mean any disrespect to Dawid Godziek because he's just doing his thing obviously trying to grab pedals but the sponsors that encourage and reward cut corners pull the integrity from everyone else. I bet Dawid Godlike would have done it better next run if Audi Nines weren't so hungry to claim tricks.

And no, you can't

theredbike (Sep 14, 2018 at 12:01)
@raddog: Key word is attempted not landed. The dude obviously shreds and I've got nothing against people trying things. My issue is with sponsors and how they claim these incomplete tricks as a piece of history.