The second FMB Gold Event of the 2019 season saw the world's best Slopestyle athletes descend on the quaint Austrian town of Saalbach Hinterglemm, a tiny town that became the global capital of Slopestyle this weekend. Coming off of a win at Swatch Rocket Air earlier this season and an impressive 3rd place at Crankworx Innsbruck, Dawid Godziek traveled to GlemmRide with a chip on his shoulder, but also with realistic expectations. Defending Champion Torquato Testa and top-level Slopestyle riders such as Emil Johansson, Nicholi Rogatkin, Erik Fedko and Tomas Lemoine also traveled to Austria with a mission of their own - whether it was to defend the title or to score a win to bounce back on the season, but Dawid Godziek turned out to be the man to beat after laying down a heater of a run, scoring 92.33, and holding onto that score for the rest of the day, and making it two out of two FMB World Tour Gold Event wins this year.

Dawid Godziek managed to secure his place in the finals thanks to a stellar run earlier in the day during qualification, scoring a clean 91.66 points, sandwiched in between Emil Johansson, who scored 93.00 and Nicholi Rogatkin, whose score also reached into the 90s with a score of 90.33. Jakub Vencl and Tomas Lemoine also found themselves within the Top 5 after qualifying scoring 88.33 and 87.00 points respectively. 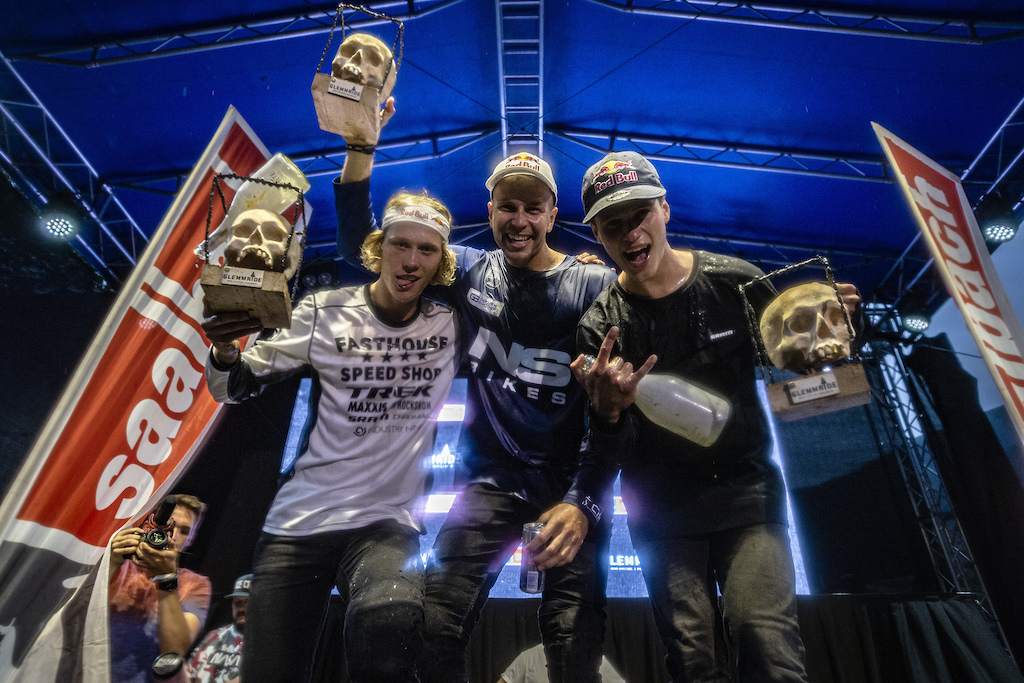 Godziek was surgical in his first finals run, looking to capitalize on his second place qualifier and looking to keep his recent high-scoring streak going. Starting things off with a big Barspin to Tuck No Hander on the first stepdown and following that up with his now-signature Twister-No Hand, he continued down the course and hit the new boner log feature with a Cash Roll, pulled a Double Tailwhip on the infamous hotel step-up and finished his run with a Truck Driver over the road gap and a huge Double Backflip X-Up on the final jump. His score of 92.33 sky-rocketed him to the top of the leaderboard, placing him more than 5 points above Erik Fedko , but would prove to be unbeatable for the rest of the night, but that's not saying other riders didn't give it their all to battle it out for first place.

Swedish rider Emil Johansson kicked things off with a Truck Driver to Inverted Turndown on the step-down and turned things up a notch with a huge Backflip Tailwhip to Barspin on the second jump. An Opposite Truckdriver to Inverted Turndown and a Fastplant 360 on the step-up put Johansson in front of the last two features - the road gap and the river jump - hitting those with a 360 Tailwhip and an Opposite 360 Tailwhip to Bar, Emil found himself sitting in 2nd place, less than 2.5 points behind Godziek. Visibly stoked in the finish area, the Swede's performance was rewarded with a clean 90.00.

After finishing 9th in qualifying, young German phenom Erik Fedko needed to go big in finals to get within striking distance of the podium - and go big is exactly what he did. Known for his huge flip and whip combinations, the crowd was electric during his run. Dropping in with a 360 Tailwhip and throwing a huge Backflip Superman Seatgrab, the first third of the course was behind him, but those that thought that the German just landed his biggest tricks were in for a surprise. A 360 Downside Whip on the boner log and an Opposite Tailwhip on the step-up put Fedko within sight of the podium - a strong finish stood between him and a potential GlemmRide win. Wowing crowds with a Double Truckdriver over the road gap, Fedko pulled his biggest combo of the day - a super steezy 360 Indian Air Seatgrab to Barspin. While his run put him on the hot seat for quite a while, Erik was bumped down two podium spots by Dawid Godziek and Emil Johansson.

The GlemmRide Top 5 was rounded out by Frenchman Tomas Lemoine, who scored 85.00 after a combo-filled run and 2018 winner Torquato Testa - who finished the day with a score of 83.33.

Traditionally, a Hero of the Weekend was also awarded during the Podium Ceremony - and the title stays in Austria after Bernd Winkler won it in 2018. Sending it big all weekend and pushing himself to higher levels, battling from prequalies all the way to finals (in which he finished 9th with a 74.66), Peter Kaiser will now take the title back to his stomping grounds in Innsbruck. 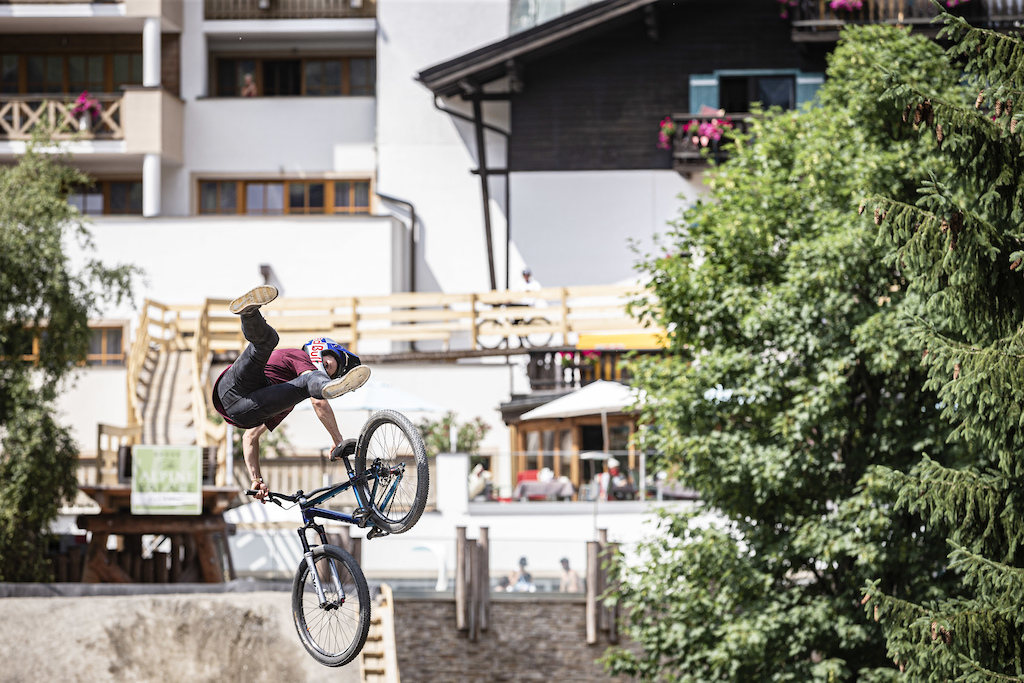 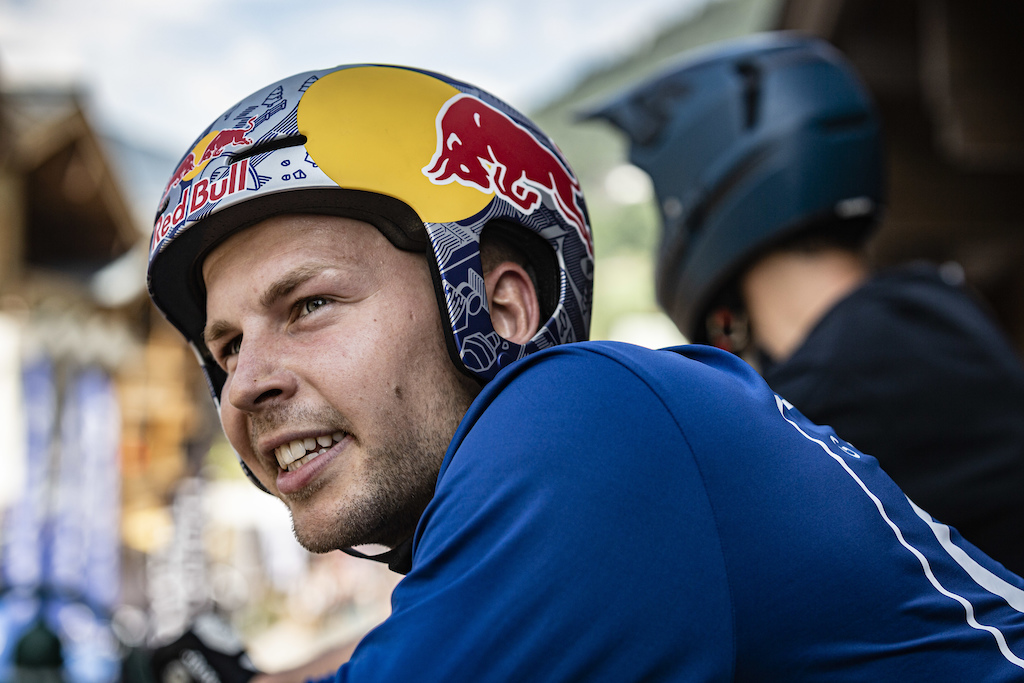 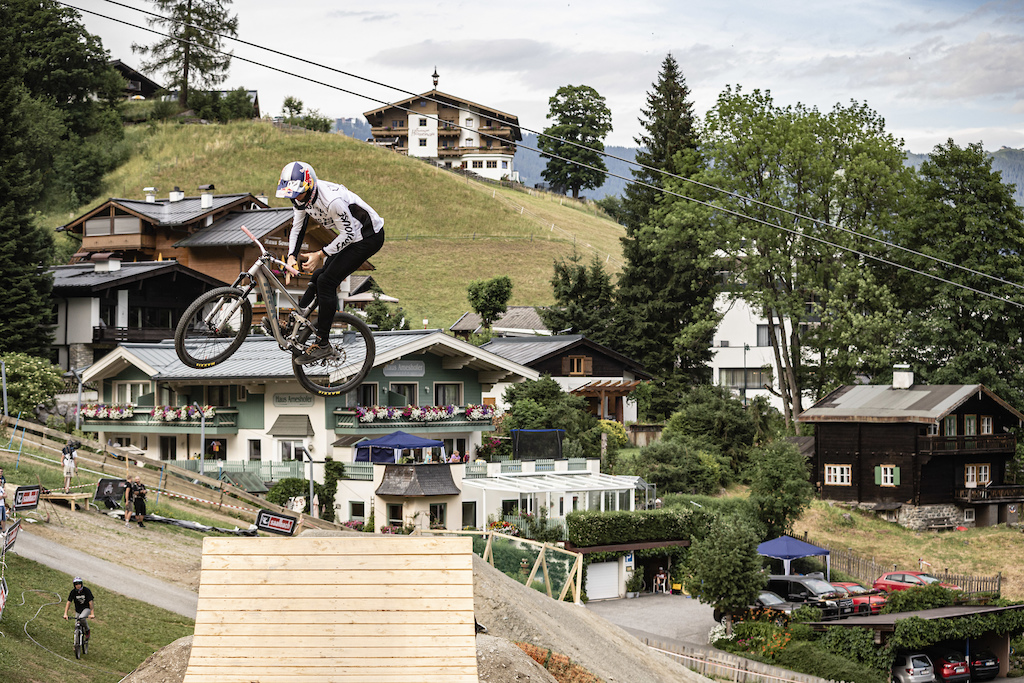 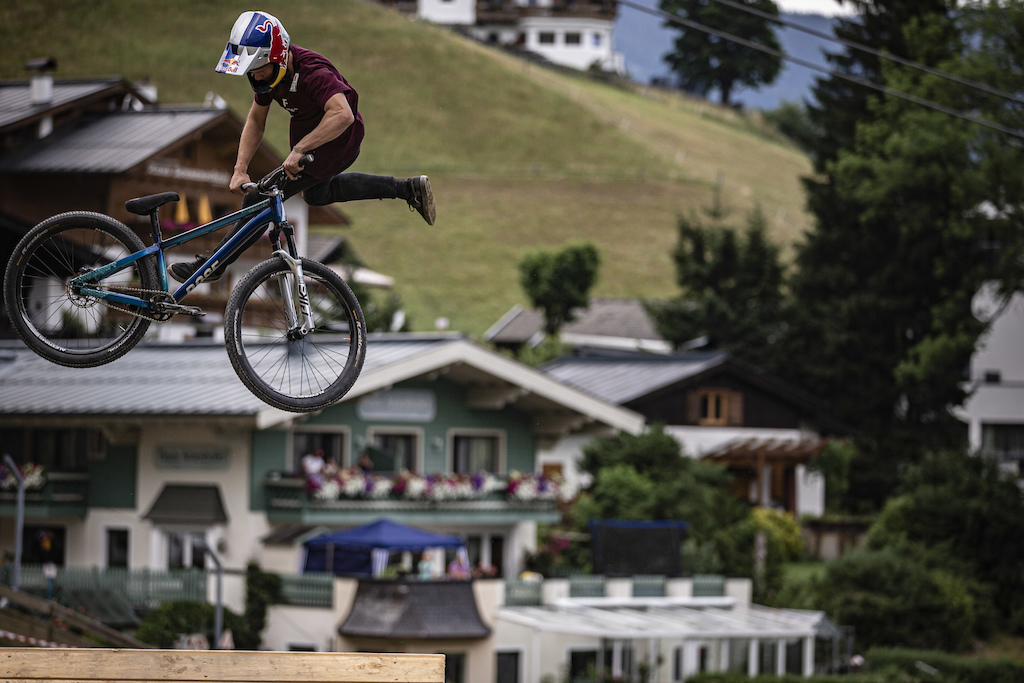 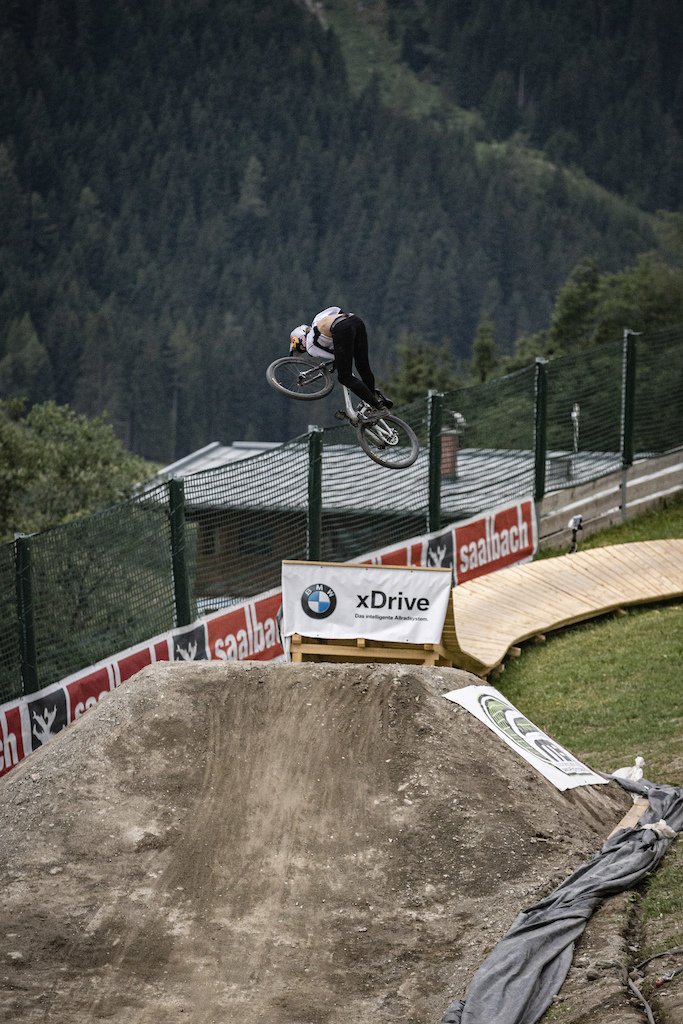 shjsy (Jul 9, 2019 at 8:59)
I think people easily forget the difficulty level of Emil’s runs because of how clean he does everything. The top two runs were both as good as each other in their own respects. Emil should have snagged it though as he didn’t slip any pedals...

jazorblast (Jul 9, 2019 at 5:16)
That was a pretty blatant pedal slip to score into the 90's. I am a big fan of the Godziek brothers, love watching them ride, but how does a technical trick landed poorly outscore slightly less technical but more style filled runs landed perfectly?

scott-townes (Jul 9, 2019 at 6:17) (Below Threshold)
1. You're comparing a single trick to an entire run "how does a technical trick landed poorly outscore slightly less technical but more style filled runs", and Godziek's run was way more impressive on every feature.

2. Points do not matter, ever. All that matters is putting them in the correct place.

jazorblast (Jul 9, 2019 at 7:32)
1. The single trick in question was not the only mistake. The double backflip X-up (although so sick and clearly pushing the sport) was under rotated, and the look on his face makes it obvious he was lucky to roll away. The point I'm making is that in neither Emil or Erik's runs do you see obvious mistakes like you do in Dawids. (Once again, nothing against Dawid, he was my favorite rider to watch in Audi Nines as well as Crankworx)

2. Points most certainly matter, within the contest itself. You are correct in saying they don't between contests and even different years of the same contest, but otherwise no one has any indication of how close they are to the person ahead or behind them without a measuring stick of sorts. Knowing you are second instead of first is only half the story.

theredbike (Jul 9, 2019 at 8:53)
@scott-townes: remember that time he tried to claim first quad whip with those sloppy landings

theredbike (Jul 9, 2019 at 10:16) (Below Threshold)
@DarrellW: I actually can tail whip and it took me years of landing right next to the pedals before i figured it out and could "claim it". Maybe thats why it pisses me off when i see paid professionals cutting corners. Dude rides sloppy and cuts corners and to me that is the most recognizable part of his riding.

gornik000 (Jul 9, 2019 at 12:20)
@theredbike: dude, you're talking about xgames gold medalist. Do you really think you can get to that level cutting corners? And it's not like he is judging his own runs it's other riders and professional judges that place him on top and give him credit for worlds firsts. He's just doing his best riding his damn bike. Why all that hate jheeez

theredbike (Jul 9, 2019 at 13:09)
@gornik000: No judgement on him personally I just think Emil had a better run and that putting your feet down and killing momentum is sloppy and should be penalized. You shouldn't have to be a xgames gold medalist to comment on the people that represent the sport. It feels like they judge these contest on the stoke level of a 5 year old rather than technical skill.

scott-townes (Jul 9, 2019 at 15:52)
@theredbike: YES NO HANDED TWISTERS AND DOUBLE BACKFLIP X-UPS AND CASHROLLS OFF A BONER LOG ARE NOT TECHNICAL TRICKS AT ALL. YOU'RE RIGHT, DABBING YOUR FOOT ON A SECTION OF THE RUN WHERE YOU STOP ANYWAYS SHOULD AUTOMATICALLY DISQUALIFY YOU FROM WINNING.

nikifor88 (Jul 9, 2019 at 6:41)
sorry, friend corrected me, it was first run from finals for everyone, nicholi scored 94 in second run, cancelled due to rain

hb601 (Jul 9, 2019 at 7:15)
Rogatkin did it in his second run. When three riders were left it started to rain and the second run got canceled. First Run is the endresult.

“His score of 92.33 sky-rocketed him to the top of the leaderboard, placing him more than 5 points above Erik Fedko, but would prove to be unbeatable for the rest of the night...”

“...but would prove to be beaten only by Nicholi Rogatkin in a second run that was unfortunately excluded due to the event being rained off.”

No need not to explain what actually happened.

ridesona (Jul 9, 2019 at 12:07)
That course does not flow well at all. Still feel this kind of event should be a show / jam format, pay the riders to put on a show, forget the subjective judging and resulting scores.

mich-pee (Jul 10, 2019 at 13:24)
Dear FMB, in case you are looking for announcers that have a basic understanding of the tricks these guys are doing, feel free to hire me.