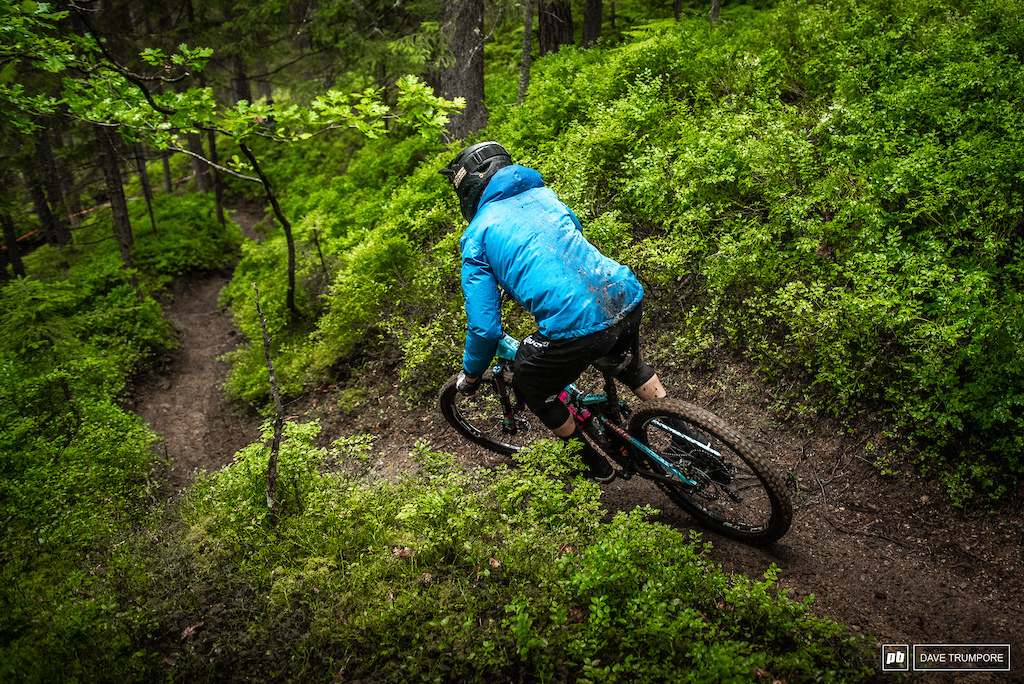 Martin Maes won Stage 1, with Damien Oton 2nd and Florian Nicolai 3rd. Sam Hill was back in 6th, back 6 seconds, after Stage 1. On Stage 2, Hill came back for the win and took over the race lead. Maes finished second on Stage 2, bringing he and Hill within a second of one another going into the final stage of the day. Robin Wallner finished 3rd on Stage 2. On Stage 3, Eddie Masters finished one second off of Hill’s pace for second, and local pinner and privateer Vid Persak finished 3rd on Stage 3, moving him up to 5th place after Day 1. So after the first day of racing, it’s Sam Hill who (provisionally) leads the race! Martin Maes is 9 seconds back in 2nd place and Eddie Masters is 3rd.

Richie was a favourite coming into this race after winning the last round, but he’s sitting in 20th position after Day 1, 1 minute 44 back. Ruaridh Cunningham had 2 crashes on Stage 1 but is still sitting in 8th spot for now. Joe Barnes snapped his chain right at the start of stage 1 which put him way back. In his first race back since breaking his collarbone in France at Round 3, Jesse Melamed is in the top 10.

On the women’s side, Cecile Ravanel took all three stages today, but was only 1 second ahead of Melanie Pugin on Stage 2! The race for second and third is extremely tight. Isabeau took a tumble and hurt her leg during practice yesterday and finished outside of the top 3 of Stage 1 and 2. Katy Winton was sitting in second after Stage 1, but a problem on Stage 2 put her 1 min 39 back. After today’s 3 stages Cecile leads the field by a commanding 1:34m lead over Isabeau Courdurier in 2nd. Isabeau finished second on the long 16-minute third stage. Melanie Pugin is just six seconds back in third from Isabeau in the overall and Casey Brown, who had the third fastest time on Stage 2 and 3 and is only 12 seconds back from third.

After missing Round 3 for injury, Anita Gehrig is sitting in 9th, and in her first race back this year after wrist injuries, Andreane Lanthier-Nadeau is sitting in 13th.

What a race! And there are 3 more stages to go tomorrow!

He is the spirit of enduro

thinkbike (Jun 30, 2018 at 12:34)
I believe he has been knighted so should be listed in results as Sir Edward Baldwin Masters

jernej96 (Jun 30, 2018 at 12:56)
Persak was crashed few times on first two stages, he said. And he rode third stage for second time, so he wasn't in any advantage on his best stage. Man is just crazy.

Cob4lt (Jun 30, 2018 at 9:19)
Are the yeti riders avoiding mud in practice to keep their bikes clean? Every time it rains at an EWS their results bomb.

jzPV (Jun 30, 2018 at 12:51)
more like that direct muscle-through approach from Rude and Graves doesn't seem to to work in slick conditions... but apparenty it wasn't that wet anymore. The recap will show...

bulletbassman (Jun 30, 2018 at 14:10)
This race is almost all cornering on natural trails. Rude grew upon bikeparks and is one of best at tackling technical terrain but he’s too heavy on the bike to be a front runner here. I’m surprised he’s only a minute or so off pace

Dallasdownunder (Jun 30, 2018 at 19:21)
@2bigwheels: I think Sam still spends most of his off season here in WA, and we have basically no mud here, he could be an exception though!

2bigwheels (Jul 1, 2018 at 9:21)
@Dallasdownunder: hes got a few more years on almost everyone on the circuit. And with the list of different DH tracks hes raced over the many years.... His success is from the amazing talent he possesses but also the experiences hes had.

Legends are legends for a reason haha

santxo (Jun 30, 2018 at 9:32)
We were at two sketchy sections of both the first and second stages today and he was one of the most composed riders, super clean line choices, smooth riding where so many of the pro riders were having trouble. He was 7th in both those stages, so definitely doing something right coming out of an injury. Here's hoping for a smooth and crash-free day 2!

islandforlife (Jun 30, 2018 at 12:41)
@santxo: You wonder if maybe he was pushing too hard previously (all the injuries). And maybe now being forced to go slow and smooth will show him how fast you can actually be when you focus on smooth and flow vs outright speed.

lozzerbiker (Jun 30, 2018 at 13:58)
@ianwish: you arent wrong, im consistently faster when i ride calm and smooth, but smashing into shit is quite a lot of fun so both work in the right times

Aksel31 (Jun 30, 2018 at 9:40)
Soon Cecile will be able to run a stage, go back uphill, then again go down and she will still be up front! Amazing performance and well done to all riders tackling this course!

PHeller (Jun 30, 2018 at 9:44)
Bigger difference between her and Courdurier than 1st and 15th places in the men. Although Cecile would place around 113th if she raced against the men.

humoroususername (Jun 30, 2018 at 10:34) (Below Threshold)
@Minikeum: yeah, the women's is a bit of a joke really. She doesn't even have to try really. Pity Rachel or some of the world cup girls don't do a few of these. They would undoubtedly be on a higher level than all the other girls aside from Cecile.

jpcars10s (Jun 30, 2018 at 11:18)
It's pretty cool they still devote so much of the coverage to the women's race. Hopefully the exposure will help boost the competition in years to come.

aido (Jun 30, 2018 at 13:18)
What's going on with Keen and Graves? Both much better riders that these results, and last seasons. Are the bike and wheels maybe letting them down?

chri92 (Jun 30, 2018 at 21:43)
It has nothing to do with their bikes. They've never been too comfortable with riding slick technical trails. Level is so high these days, if you don't feel confident and you're not well rounded enough, you will drop back. Look at Richie, won the last round, this time he's struggling.

salespunk (Jun 30, 2018 at 10:57)
Big off on one of the stages, but not really competitive on the others either. Don't get me wrong he is a beast and would crush any of us at his training pace though. Mud is Rude's Kryptonite so there is that as well.

tiagomano (Jun 30, 2018 at 12:58)
@atrokz: Nukeproof doesn't really have a competitive 29er yet. so the 27.5 mega would be the way to go.
other than that you have had wins on both wheel sizes, is more a question the rider and their riding style
the 27.5 wheel i think also suits his riding style better, he is shorter, and with his inside line to change direction quick

tiagomano (Jun 30, 2018 at 14:20) (Below Threshold)
@Pager72: i also said that the 27.5 would suit Sam Hill better.
but the geometry and the material(Carbon) just seem to me more competitive than the 29er.
that beeing said, Sam would win on either bike, and Eliot for that matter.

BS again... Alu or carbon don't mean shite... Maes rode on Alu last years... Sam did... Cecile did... you just talk the standard talk.. and the Hill hype... shout Hill and you get upvoted to Mars... a bit sad nowadays...

tiagomano (Jun 30, 2018 at 14:32) (Below Threshold)
@Trailstunter: it doesn't mean you can't win on it by being on a alloy frame, but if the bikes weight less, the rider tires himself less, therefore has more energy to spend where it needs.

i'm a fan of Sam Hill, as i am of some other guy's, i don't buy on the Hill Hype, just his results. There are riders that i would prefer that they won over him

Just lost 7 seconds on stage 4 to him...
He is lucky that Maes could not compete one race due to dislocated shoulder...
Still, Maes is one of youngest of the EWS field... getting stronger and better each year... I think Maes is the coming world champ to beat...

but yes, the guy will win

Funny that I got down voted though by the Hill-Billies