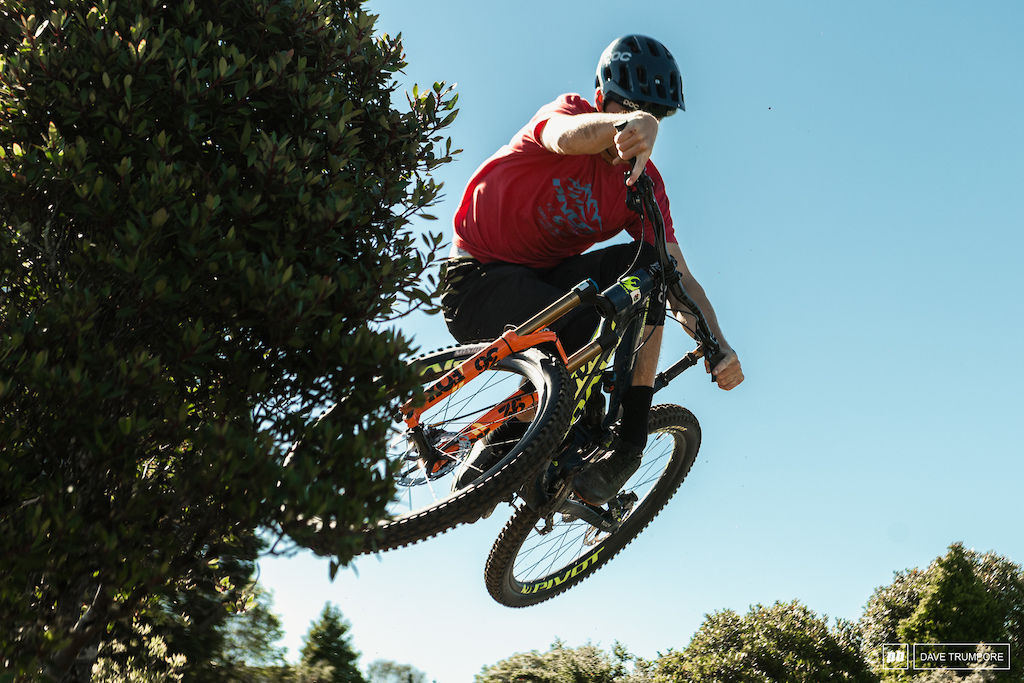 There was just one stage today in Tasmania, but it was a big one - the Queen stage. This stage offers the winners 40 points towards their overall totals and the current series leaders have taken full advantage as Maes and Courduier came down fastest.

In the women's there were two familiar faces in the top spot as Charre and Courdurier continued their Rotorua battle but Isabaeu took it by four seconds in the end. Third place went to Tasmania local and Asia-Pacific enduro champ Rowena Fry, who took some big scalps. ALN was fourth and Jill Kintner immediately impressed as she came fifth in her first EWS race.

Everything is still to play for with five more stages of racing tomorrow but Maes and Courduier will be happy in the knowledge they now have 130 points of breathing space over the rest of the field in the overall. 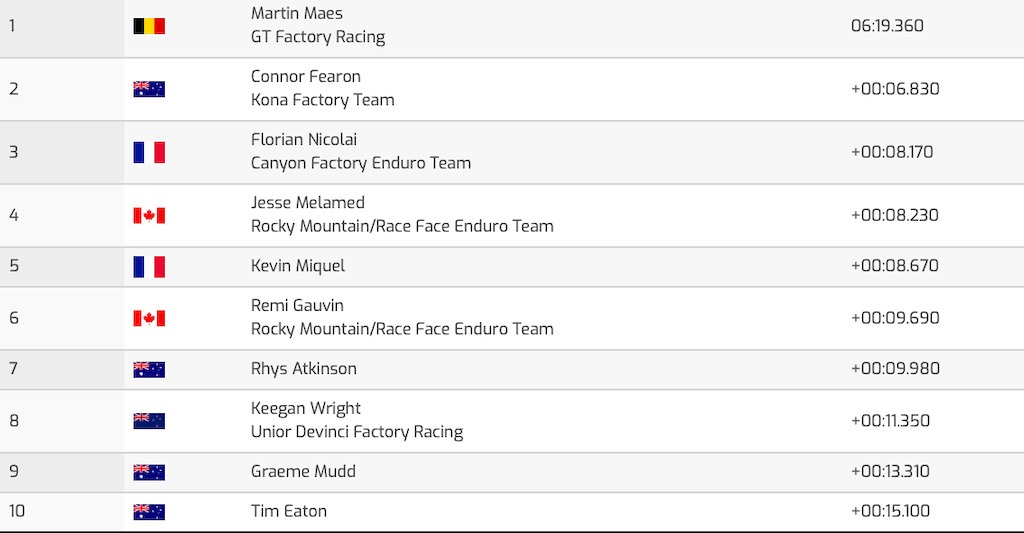 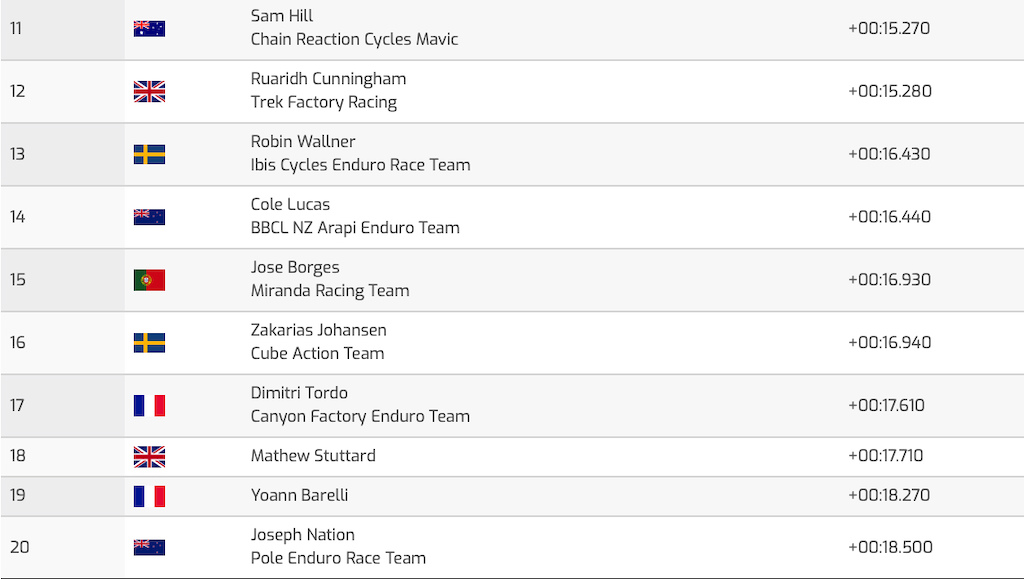 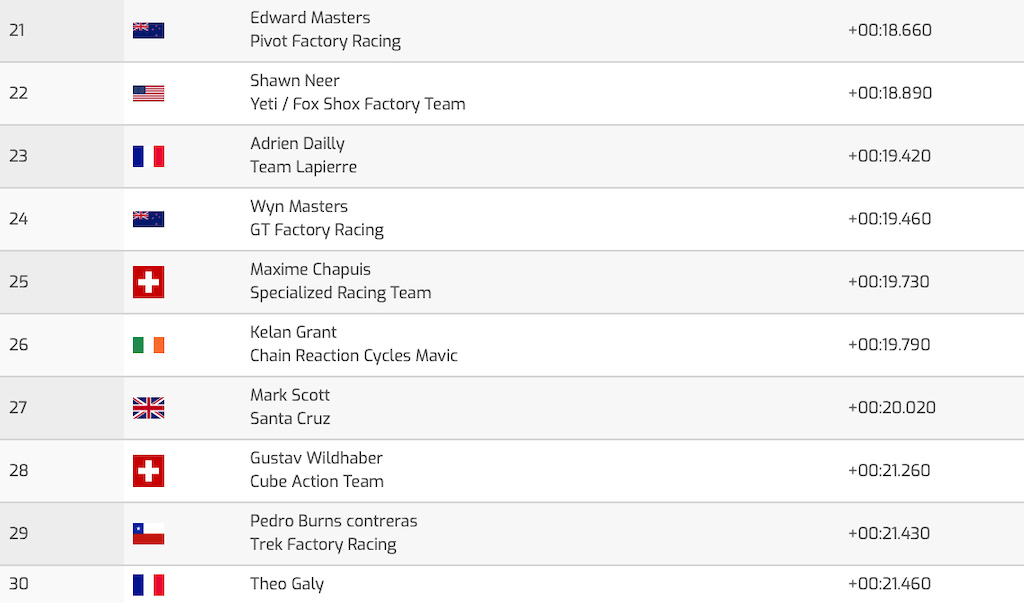 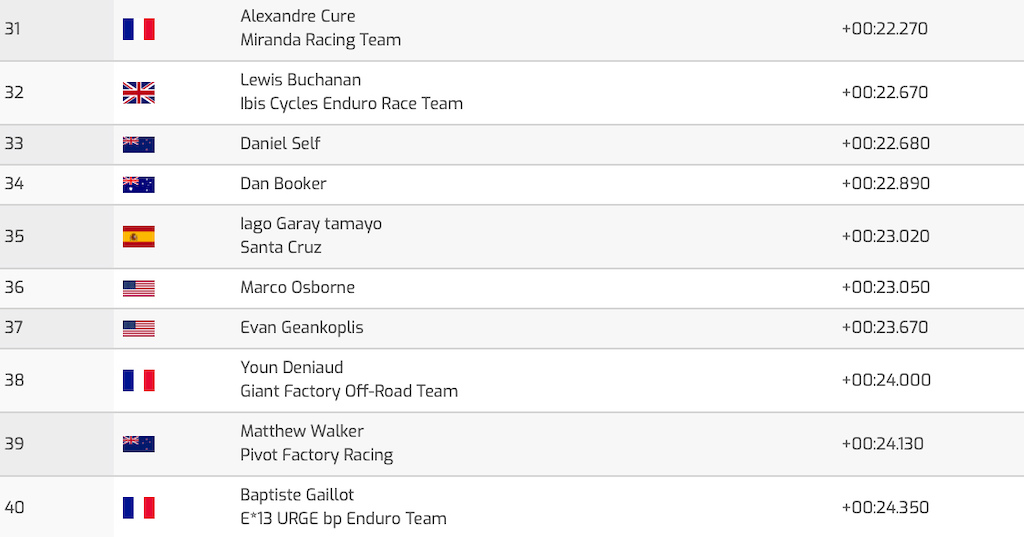 Gravity-Fiend (Mar 30, 2019 at 0:07)
Connor Fearon has some god damn legs on him. Hopefully Maes and Fearon have a good rivalry going this year

WAKIdesigns (Mar 30, 2019 at 5:21)
@Jordanh604: it is important to have examples like that so that you can refer to them when beginners ask what should they chose since they heard clipless are 30% more effective or other nonsense

scott-townes (Mar 30, 2019 at 7:38)
@WAKIdesigns: My favorite is, "Clipless is more effective because you can PULL UP as well as push down on your pedals! its so efficient!"

scott-townes (Mar 30, 2019 at 7:56)
@kopaczus: Pulling up on your pedal does nothing but put unneeded strain on your knees, whether you notice it or not because your legs/knees are not designed to function that way. Its just a terrible technique. Pushing hard with your front leg while unweighting the rear leg is the most effective way to pedal. This is why it doesn't matter if you use flats or clipless.

I thought you were going to say that you can do the same thing on flats, which id agree with, but that took a weird turn

dirtbagluvin (Mar 30, 2019 at 8:10) (Below Threshold)
@scott-townes: I agree. Undue stress on all of your knee ligaments. The only thing that's worse is adding in a twisting motion.

WAKIdesigns (Mar 30, 2019 at 8:16)
@kopaczus: pulling up is a result of either very high or very low cadence. Both happen naturally and rather subconsciously (people who say they worked hard for years on their pedal stroke never tested themselves so they think they pull. Tests of top roadies show, they merely unweigh the foot when they stop focusing on how they pedal - when analyzed over a few hour ride) . In case of high cadence 80RPM+ you are moving the peak power point lower in the stroke generating less peak power but through longer duration, resulting in a smoother stroke (an effect of smidging the ground is often described as riders foot goeas back and up) Lower cadences like 60-80RPM put peak power higher up, it is called pushing over the top. In that case it is impossible to “pull” when you start pushing so early. There is no scientific proof of cyclists actually pulling on the pedal when they are not focusing on doing it. There is no scientific evidence showing whether smooth is better than pushing over the top. There is no scientific evidence showing whether clips are more efficient than flats. Finally I have never heard any evidence of pulling being bad for knees and cannot imagine it being the case, considering how weak hamstrings are and how hard it is to really incorporate them into the upstroke without sacrificing down stroke.

dtm1 (Mar 30, 2019 at 12:16)
@scott-townes: Total baloney. That motion (pulling up and back, i.e. knee flexion) is the EXACT function of the hamstring. It is no more of a risk to the knee than knee extension via the quad, when pushing down on the pedal.

BikesBoatsNJeeps (Mar 30, 2019 at 12:30)
@WAKIdesigns: I ride both. I have slightly better control of the bike with clips, but that is because I've ridden clips for years, it's a confidence thing. On my road bike I use them because of better clearance. My touring/commuting rig has flats, so does my fat bike. Sometimes I wish I had less grip on my flats. I like flats better, but am a more confident rider in clips.

motard5 (Mar 30, 2019 at 13:53)
@WAKIdesigns: This is Enduro, where basically all the actual timed racing is just like downhill, so the flats vs. clips debate doesn't matter much in regards to pedal cadence. Look to XC or road racing if you want proof of effectiveness, where 100% are riding clips.

WAKIdesigns (Mar 30, 2019 at 14:05)
@motard5: there is more to do with riding clipless than efficiency, even in XC (in fact for XC you need them more to stay on the bike than on Enduro or DH competition, especially those who for reasons I will not touch do not use a dropper post) and it is beyond understanding of beginners who virtually all, wonder about efficiency. It is beyond any question that beginners are told to clip in ASAP, either through bro-advice, bike shop advice or the sticker on cranksets of pretty much all Trek bikes saying "this bicycle is to be equipped with pedals that have a positive foot-retaining device such as toe clips or clipless pedals".

WAKIdesigns (Mar 30, 2019 at 14:23)
@EliotJackson: Didn't the uber wealthy team clinic connect you to the machine where they measure how each muscle twitches and then tell you how you should pedal, then check every few months whether you are doing the homework? In the end we all believe in science. Like pro riders doing taping (infused with lab tested substances!) not to mention cupping and attaching pieces of aluminium to fight vibrations. The redness after the therapy is toxins leaving your body.

ReformedRoadie (Mar 30, 2019 at 14:41)
@scott-townes: you can argue reasons why flats are better...but pedaling efficiency is not one of them. You don’t pull up, you unweight...and kick over and pull back across the bottom of the stroke.

WAKIdesigns (Mar 30, 2019 at 14:51)
@ReformedRoadie: agreed - then if you watch riders at TDF or Giro doing a steeper climb, they are more than often literally hammering down their pedals, especially when tired, that is where "science" of spinning even strokes goes out of evolutionary window and body uses biggest muscles (quads and glutes) to deliver power as if a Saber Tooth WADAiger was chasing them. All that apart of the "science" of toes down, flat foot and toes up styles of pedalling. I know for a fact that different racers within same pro-team, under scrutiny of same coach, have different cadences and pedalling styles. The whole case is overanalyzed by people reading Roadie sites and mags.

mountainyj (Mar 30, 2019 at 18:22)
@scott-townes: take someone who preaches clips and ask them to bunny hop or hit a jump on flats. They’re a crutch for most people using them. Anybody who wants to learn how to be a better rider and bike handler, should ride flats! Once the skills are there to not use clips as a crutch, then they can be utilized for any benefits a rider may feel they get from them.
Three riders who made the point you don’t need clips. Sam Hill, Connor Fearon, Nathan Rennie.

scott-townes (Mar 30, 2019 at 22:04)
@EliotJackson: That's what I get for trying to sound intelligent. Got any job openings at roots and rain? I promise I'll rep you guys so legit like.

mych79 (Mar 31, 2019 at 3:26)
@dtm1: function is context dependant. In walking and running the hamstring actually stops the knee from bending and straightens the leg - in the sagittal plane.

ReformedRoadie (Mar 31, 2019 at 9:14)
@WAKIdesigns: not always, maybe when fully spend and form goes out the window...but pure climbers who “dance on the pedals” and guys like Lance and Froome who utilize a high cadence at higher intensities are never just mashing.
Like most things, it’s down to individual physiology and the circumstance/requirements of the event.

Sam Hill is not an argument for flats...he is an insanely talented anomaly. If flats were an advantage, it would not be the small minority.

Keep on sending it remi

mych79 (Mar 31, 2019 at 3:28)
@pinhead907: talent doesn't exist, I reckon if you asked Maes he'd tell you about the countless hours of training and practice that make it seem like a magical talent.

catweasel (Mar 30, 2019 at 10:20)
5 more stages before anyone makes it to the podium, I think the big test for her comes on day 2. With the combination of DH, Air DH and pump track she is used to racing I can see her putting some good stage times in on these tracks, but the endurance aspect is a an unknown. She always seems such a great personality as well as amazing rider, hopefully she is still in a podium spot at the end.

there goes my fantasy points

srjacobs (Mar 30, 2019 at 4:46)
He was available in the fantasy league, but I didn't see his name on the actual EWS start list yesterday.

harrybrottman (Mar 30, 2019 at 6:17)
@nozes: yes he clearly stated on Wyn tv he would go home for some family time and then head to Europe for the first wc

Mugen (Mar 30, 2019 at 9:16)
EWS fantasy teams are a part time job: watch all the videos, follow all the social media, analyse the photos, befriend the top riders... Commit to the fantasy league you lazy scum

dj100procentenduro (Mar 30, 2019 at 13:42)
@jaame: I’m mostly joking but also really interested. Some weeks ago I bought new 29 wheels. I have no money left to spend. But getting only one wheel is quite tempting

but do I need it? Today I tried friends Trek remedy and it really is much diff. than my stumpjumper 29. It seems to jump on its own and kinda mini whips soooo easily. After spending last 12 years on 29ers I’m thinking...

jaame (Mar 30, 2019 at 17:32)
@dj100procentenduro: I'm in the position of not having a mountain bike at this particular time. I sold my Nomad 3 about six weeks ago, including a stack of about 8 27.5" tyres. Minions, butchers, shorties and others. I had my heart set on a 29er despite having never ridden one properly in my life. I guess I've swallowed the PinkBait hook, line and sinker.
Imagine my horror to discover that maybe 29/29 isn't the way forward!
At least I haven't taken the plunge yet. It's not too late to buy a 275, plus an extra fork and front wheel!
Holy shit! Exciting times!

heinous (Mar 30, 2019 at 2:14)
It’d be so good from a reader perspective if the stages in reports were named! Some people know them, some people want to plan trips and rides to them!

Great to see such amazing results from them all. If we can get them all in the top 10 by race end that will be ????.

charmingbob (Mar 30, 2019 at 7:36)
What happened to Katy Winton? According to her Instagram she was racing but I don't see her name on the results.

Pothead78 (Mar 30, 2019 at 8:53)
Wonder how many DH world cups Maes plans on racing this year, bet there's more than a few top dhers hoping it's none after last season's final race

dwmetalfab (Mar 30, 2019 at 20:21)
Not sure why i got down voted. I get that he had a run in with a drug test but nothing official has been released. Are we expecting him to be out for the whole season?

mfoga (Mar 30, 2019 at 7:20)
EWS had made true cycling status when peoples first though is to wonder if they are clean LOL